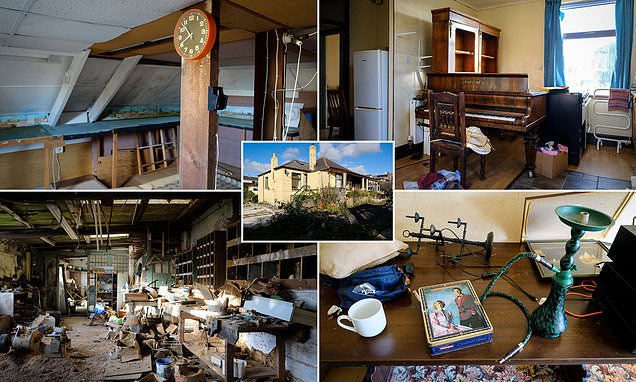 Abandoned four-bedroomed bungalow in Cornish mining town could be yours for just £140,000 and even comes with a baby grand piano (but there’s one big problem: it’s got severe subsidence)

An abandoned home at the heart of a Cornish mining town is going up for auction with a random assortment of possessions left inside, including a baby grand piano in the kitchen.

Named after the historic mine in Redruth, the remains of which provide a backdrop to the property, Pednandrea Bungalow sits on a large plot of land with views stretching across the town.

Thought to have been built in the 60s, the four-bedroomed house is surrounded by various outbuildings, including a large workshop where old fashioned tools have been left exactly as they were on the last day of business, many years ago. 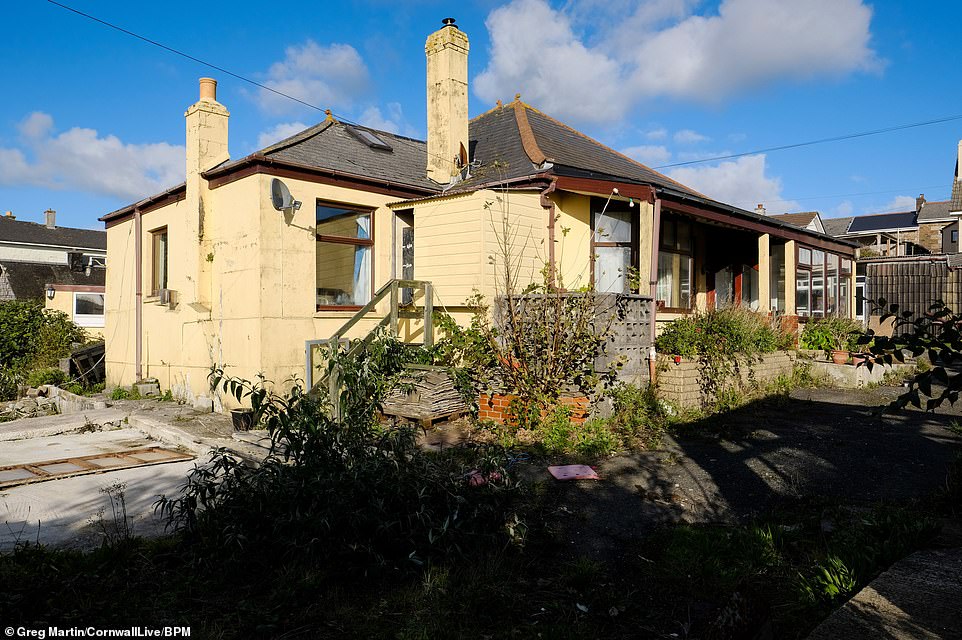 Following the death of the long term owner in August 2019, Pednandrea Bungalow is on the market after the current occupier decided they didn’t have the time to renovate the property

However, house-hunters might get a sinking feeling when viewing the property, because, sadly, the home has fallen victim to subsidence thanks to the mining works it was built upon.

Agents said the house was most likely suited to an investor who can demolish, bolster and rebuild, and this is a house where time really has stood still even though the ground beneath it hasn’t.

In the 18th century Redruth was one of the largest and richest mining areas in Britain and the town’s population grew markedly.

The area was surrounded by copper ore deposits, which was needed to make brass, an essential metal during the Industrial Revolution.

However, by the end of the 19th century, the Cornish mining industry was in decline with Britain importing most of its copper ore.

Now, towering behind Pednandrea Bungalow is what remains of the stack from Pednandrea Mine in Redruth. 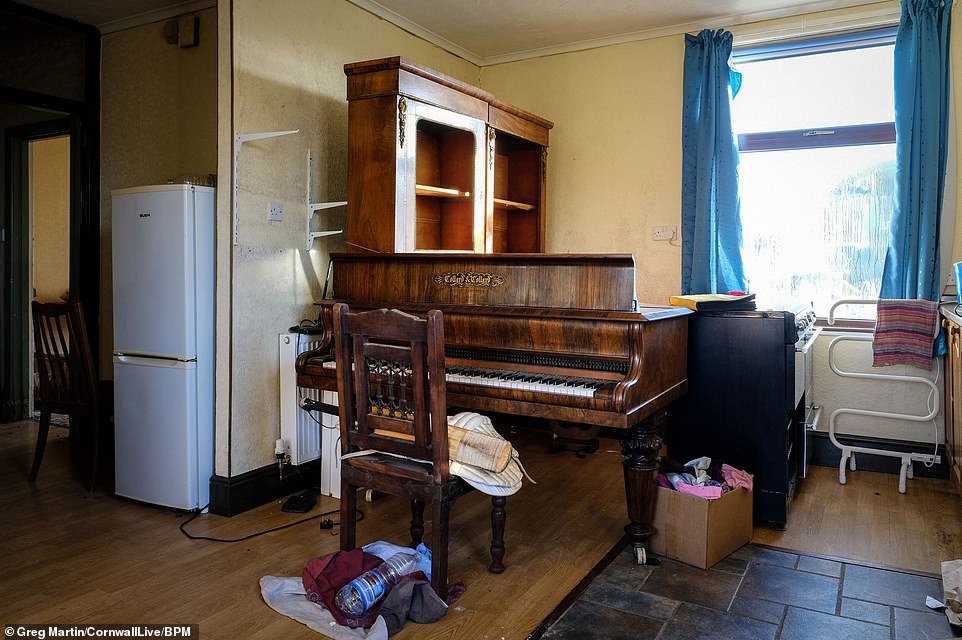 The kitchen comes with its very own baby grand piano, between a fridge and a cooker 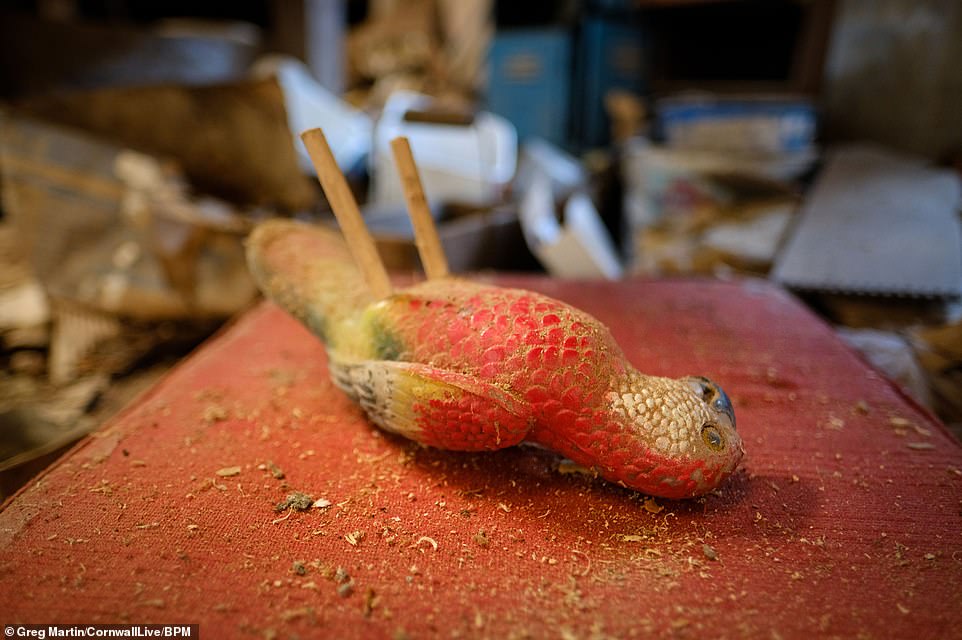 The home has fallen victim to subsidence thanks to the mining works it was built upon. Even the parrot has resigned itself to its fate 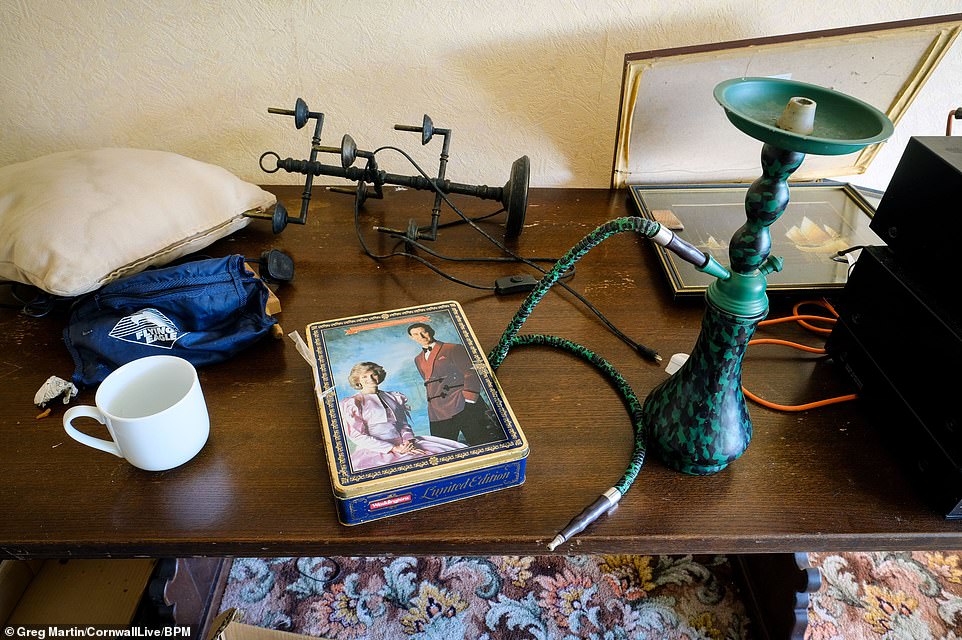 The bungalow, which is up for auction at a guide price of £140,000, comes with an assortment of leftover belongings, some of which are on the the quirky side 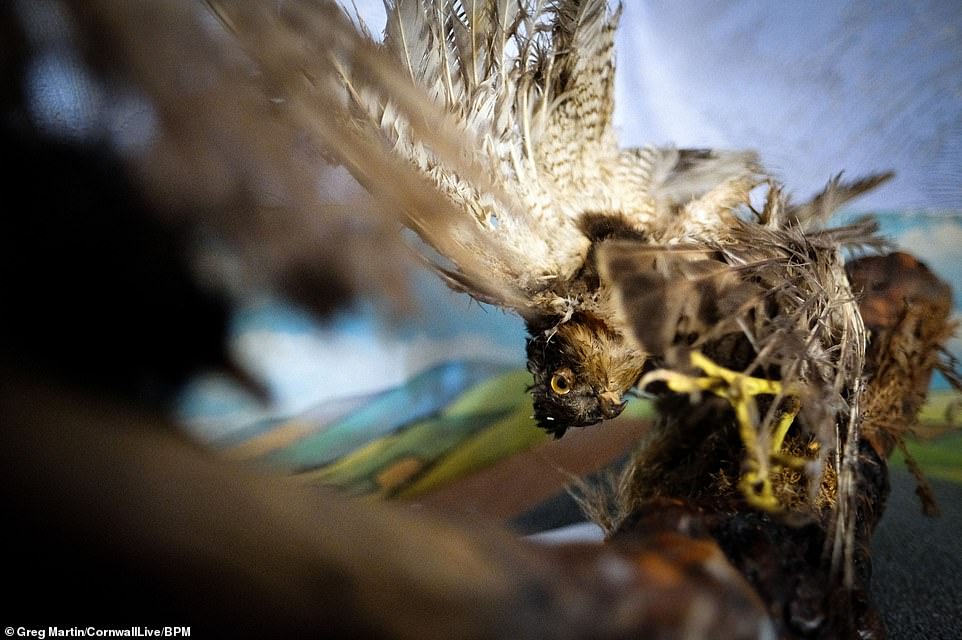 Any potential buyer will most likely need to demolish and rebuild the home. A stuffed bird inside the property has seen better days through its glass eyes

Pednandrea Bungalow in Redruth is up for auction with a guide price of £140,000.

Following the death of the long term owner in August 2019, the property has come to market as the current occupant doesn’t have the time to renovate the home.

Listed with EweMove, the description reads: ‘This plot offers a lot of scope for development due to the size and location, subject to the necessary permission being obtained.

‘There are many outbuildings on the site as well offering a lot of storage space and a garage with an inspection pit.’ 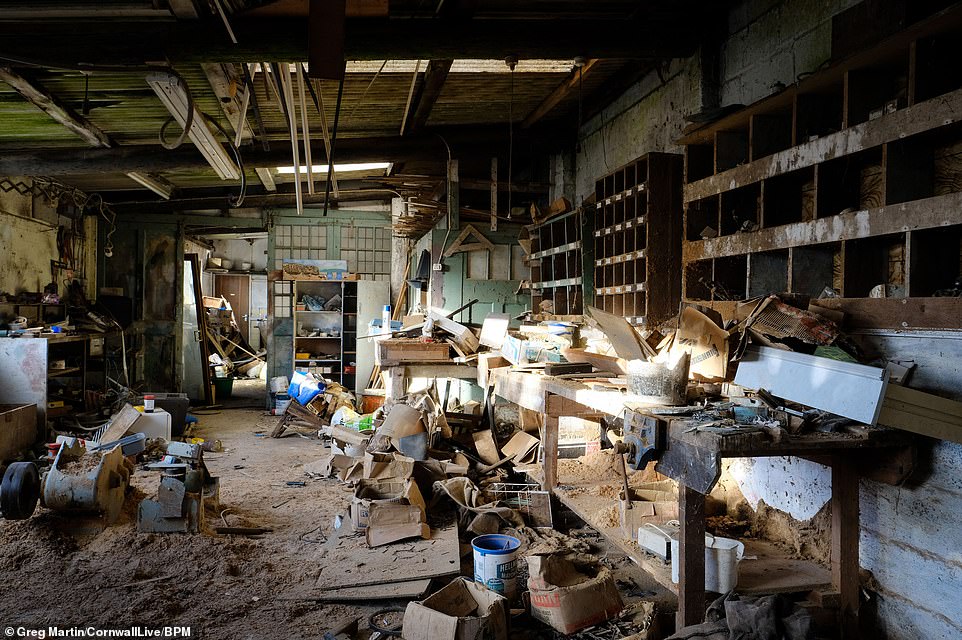 The the dusty workshop, untouched since its last day of business, is full of discarded tools that are destined for the skip 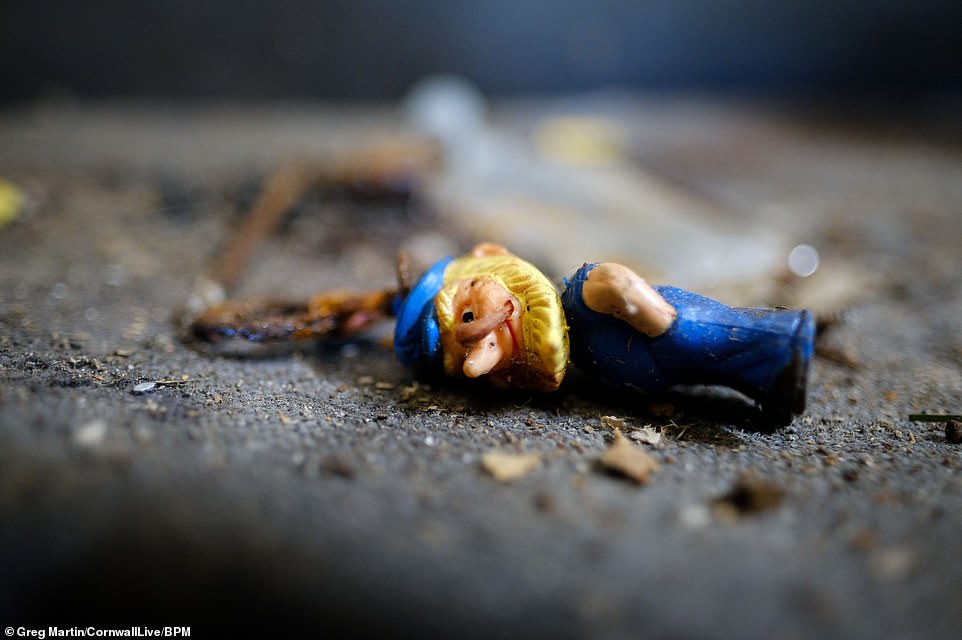 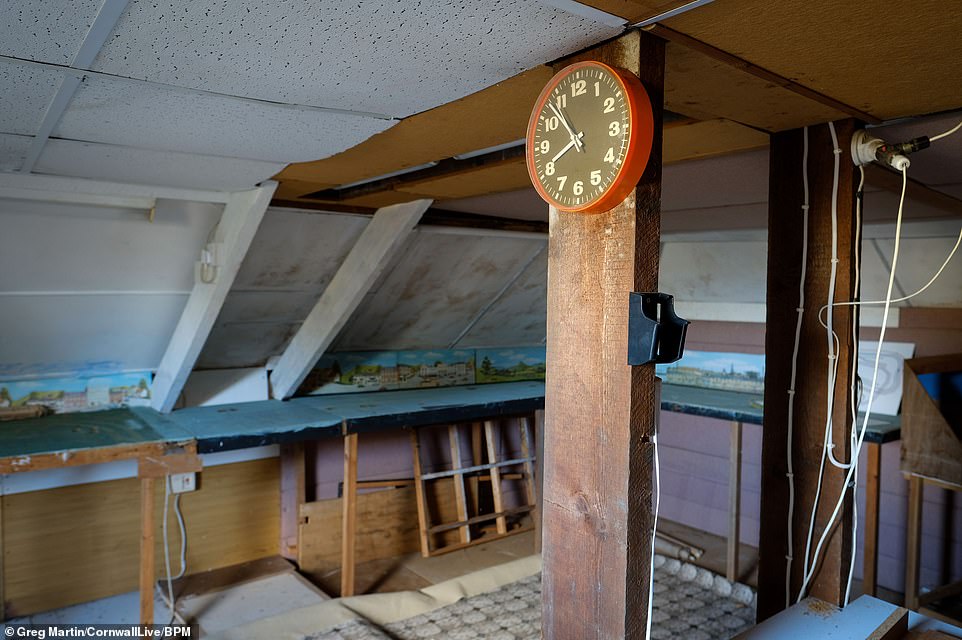 The attic, where time has stood still, unlike the slowly sinking ground way beneath it

Rebecca Stoneman, Local Property Expert for EweMove in Redruth, said: ‘The property has come to market from a vendor who isn’t here enough to deal with it – to deal with the problems.

‘There are historic mining works underneath the property that need to be rectified, which sadly means the bungalow will probably have to go.’

Seeing the home that it once was, Rebecca continues: ‘It’s just such a lovely big plot. It’s right in the centre of Redruth, the views are lovely, and it would be wonderful if it could just stay as a home.

‘The whole stamp of the place is big for Redruth, and so it would be lovely if it could stay this way, but obviously I don’t think it can, which is really sad.’ 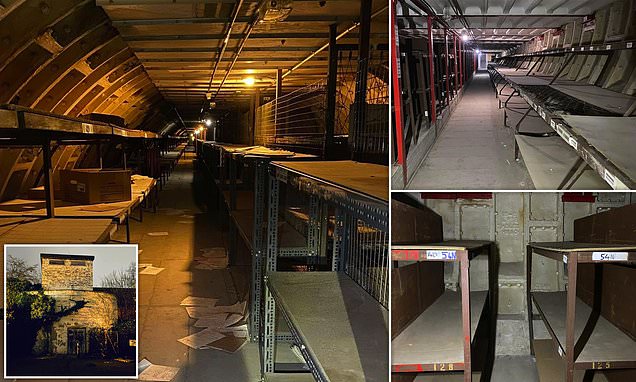 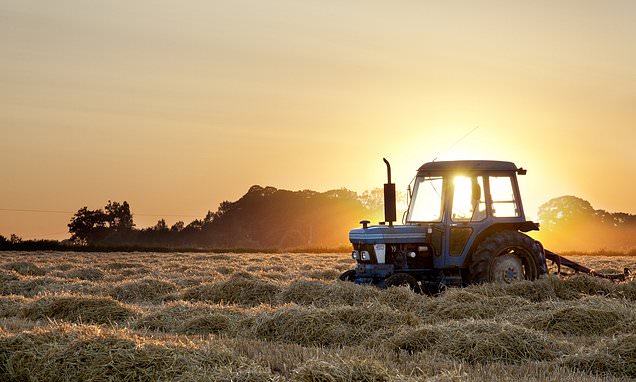 No one cares for nature more than small farmers like me. But paying us to 'rewild' land is eco-zealot idiocy: Cornish Valley Farming owner ROB HALLIDAY hits back as Government launches £800m fund to encourage product... 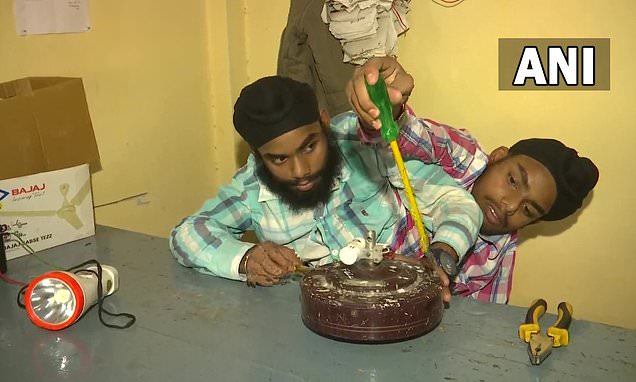 Indian conjoined twins get dream job 19 years after being abandoned

Indian conjoined twins score their dream job as electricians 19 years after being abandoned by their parentsSohna and Mohna Singh, 19, employed by Punjab State Power Corporation Limited to look after their electrical... 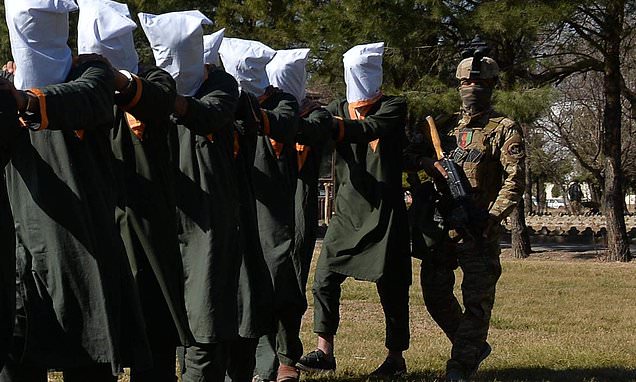 Afghan officers who spied for Britain have been ‘abandoned’

Afghan officers who spied for Britain have been 'abandoned' and left at the mercy of the Taliban despite being promised safe passage to the UK11 men and one woman worked for Afghanistan's now disbanded National Direc...