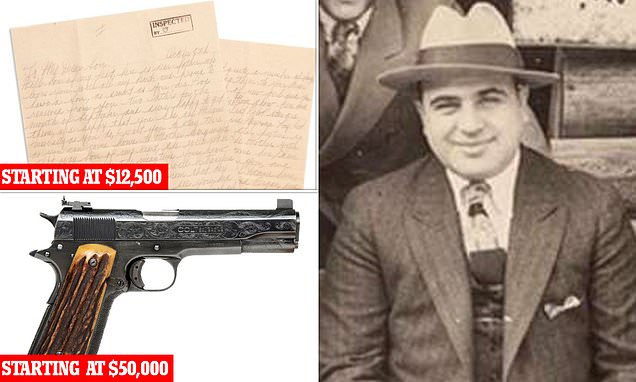 Scarface stash for sale! Al Capone’s favorite .45 automatic pistol and a letter he wrote from Alcatraz are among 174 of the mobster’s possessions being auctioned off by his granddaughters

The granddaughters of one of America’s most notorious gangsters – Al Capone- are putting a treasure trove of the mobster’s personal items, including his favorite .45 automatic pistol and a letter he wrote to his son Sonny from Alcatraz, on the auction block.

The prized pistol is expected to fetch the biggest haul, with a started price of $50,000, and his private correspondence is listed for $12,500.

In all, there will be 174 items on sale in the collection entitled ‘A Century of Notoriety: The Estate of Al Capone’ in Sacramento, California, on October 8. 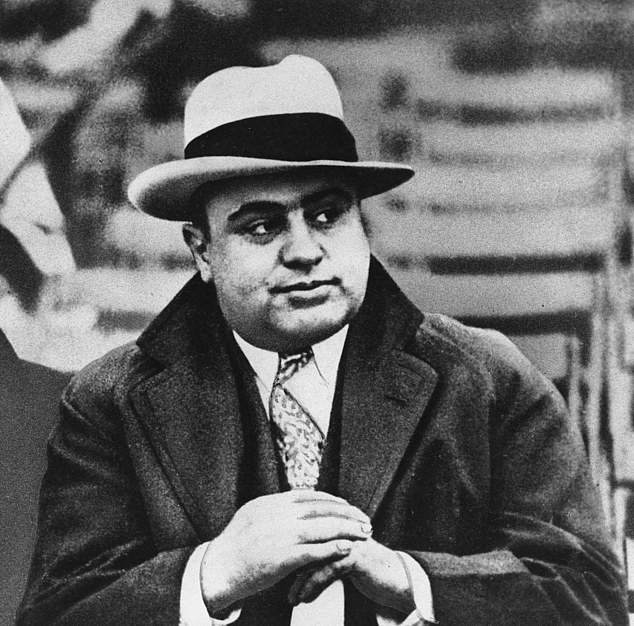 The former possessions feared mobster Al Capone go up for auction in  Sacramento on Oct. 8 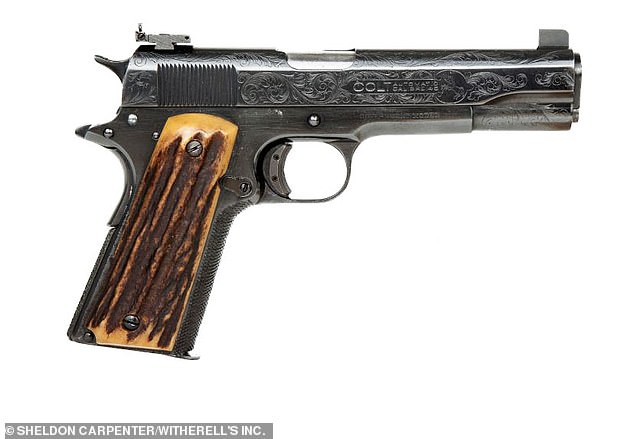 Capone’s prized .45 automatic pistol will be sold at the auction, starting at $50,000 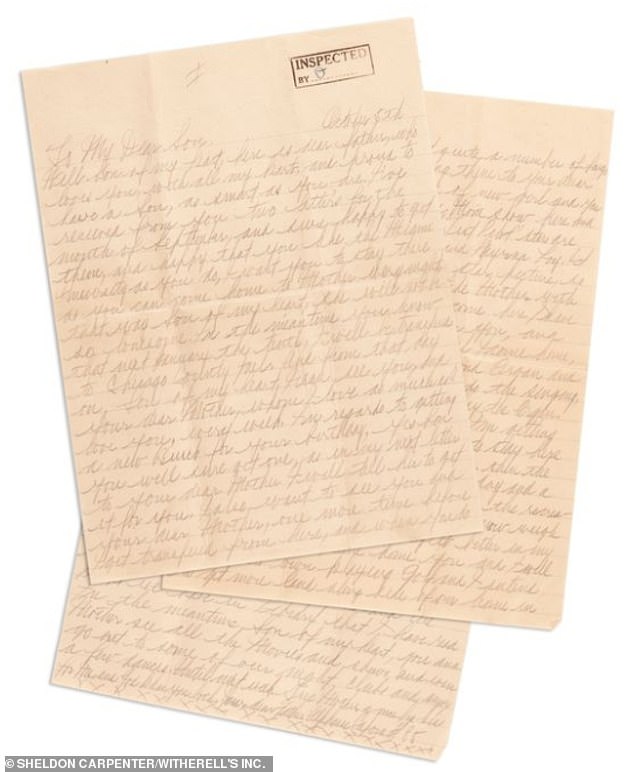 A letter written from Alcatraz to Capone’s son Sonny will start at $12,500

The other items include vintage photos, the bed he shared with his wife Mae at their Florida mansion, his platinum Patek Philippe pocket watch and various other possessions.

‘It gives us a glimpse into this American legend’s lifestyle, probably more than has ever been given before. And it’s hands-on. It’s material culture at its finest,’ consignment director Brian Witherell told KRON4.

Witherell will be heading the event and believes it will be one of the most important celebrity auctions ever held.

The items were previously owned by granddaughters Diane and Barbara Capone. 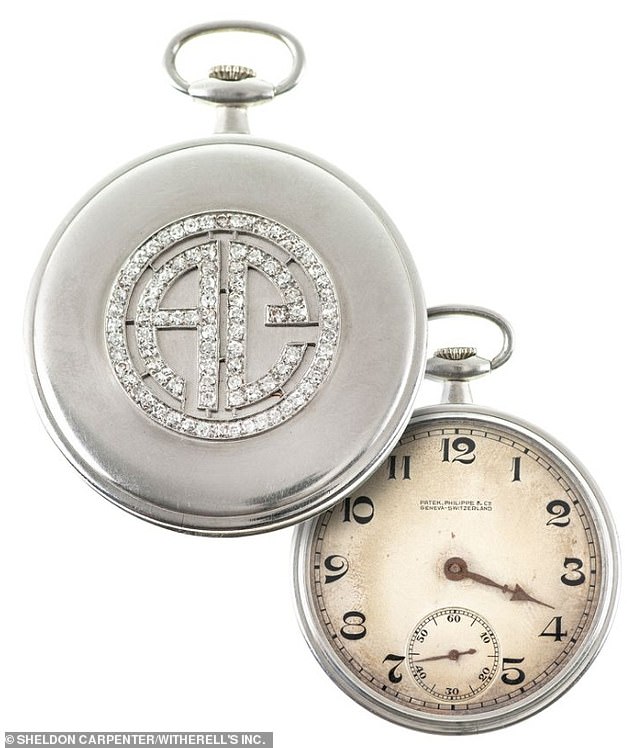 Bidding for platinum Patek Phillippe watch owned by Capone will begin at $12,500 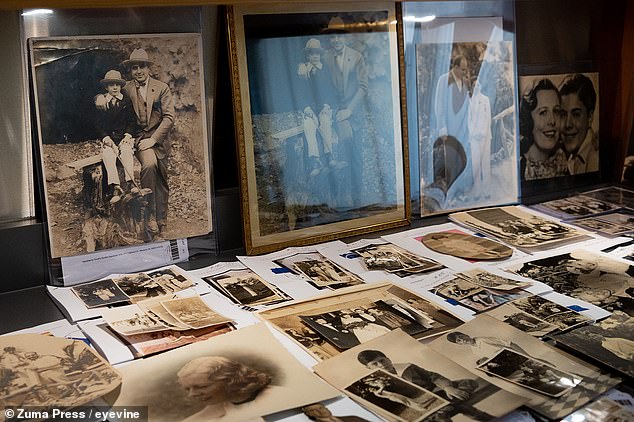 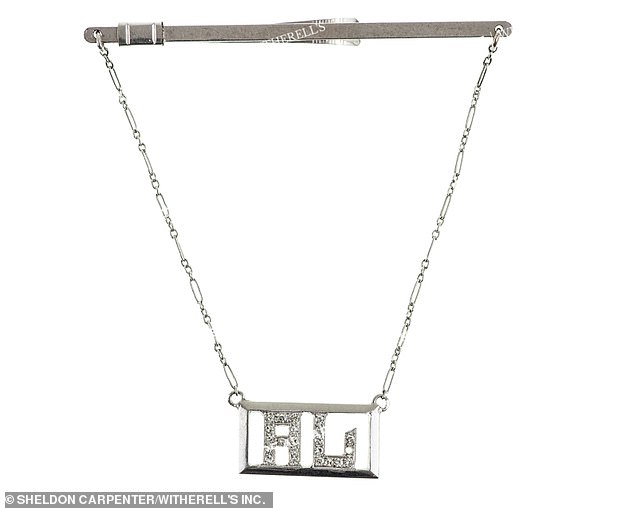 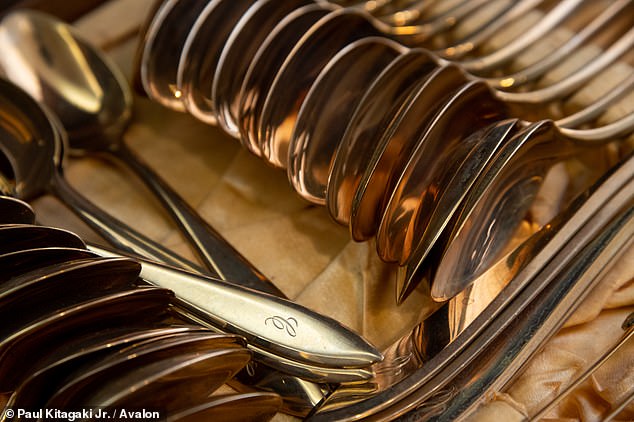 Sonny’s daughter Diane Capone, 77,  said that they planned on selling the estate because the aging sisters were worried they would not be able to save the collection in case of a future California wildfire.

She told The San Francisco Chronicle that she hoped that the possessions would reveal the softer side of the infamous gangster.

‘It was very much like a double life. I really don’t know anything about his public life other than what I’ve read, she said.

‘It’s a riddle, a conundrum. It’s hard to believe that some of things we’ve been told about his public life could have been done by the same person we knew as this loving, gentle grandfather figure.’ 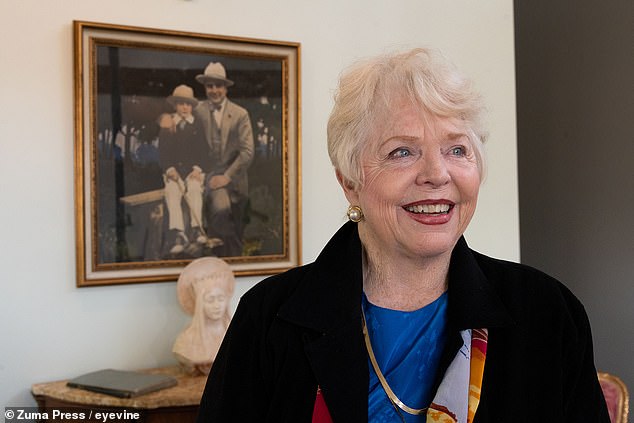 Diane Capone, the mobster’s granddaughter, owned the haul with her sister Barbara 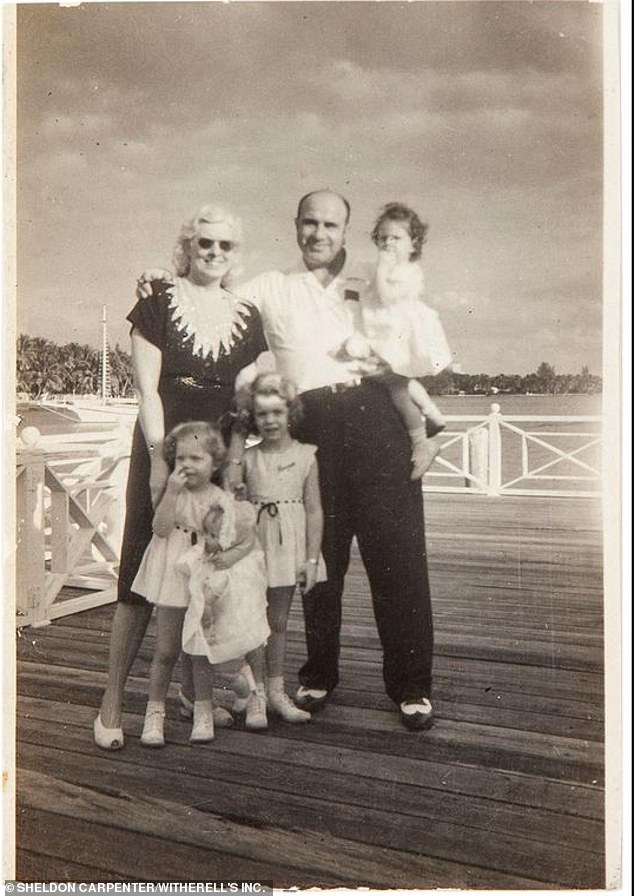 Capone described her grandfather as a family man and hopes the items will reveal a softer side. This is the last photo taken of Al Capone with his wife Mae and grandchildren Diane, Barbara and Ronnie is being sold starting at $1,250 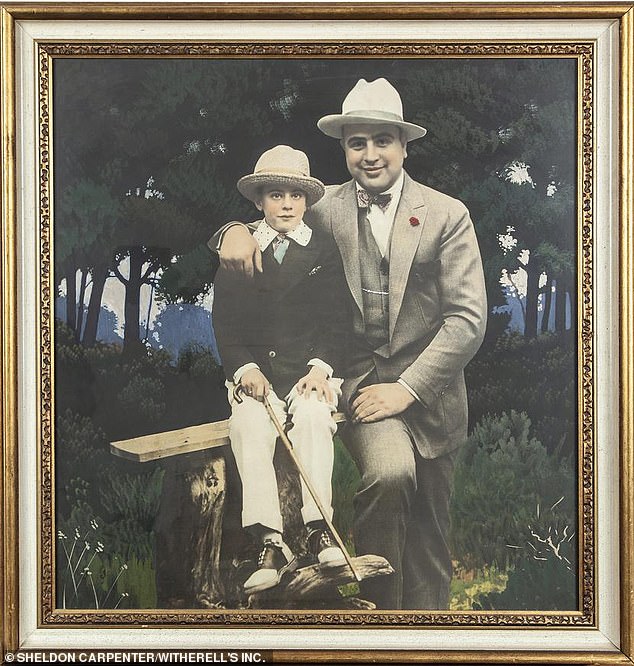 vintage photo of Al Capone and Sonny is on the block for $5,000

She further described her grandfather as a family man who cared for Diane as well as his son and other grandchildren.

Diane Capone wrote the 2019 book Al Capone: Stories My Grandmother Told Me and will be holding a preview event at The Sutter House in Sacramento on October 7.

Al Capone was one of the most feared figures in organized crime during the Prohibition Era, when the sale or production of alcohol was banned in the United States.

Born in 1899 to Italian immigrants, the Brooklyn-born Capone became influenced by a life of crime by friend Johnny Torrio.

He earned the nickname ‘Scarface’ in 1917 after getting into an altercation with a man at a bar that left three scars in his face.

He married wife Mae Coughlin in 1918 and his son Sonny was born on December 4 of that year.

He was the boss of the Chicago Outfit, a 1920s gang that beat out rivals in bootlegging and racketeering with increasingly brutal methods.

These culminated in the 1929 St Valentine’s Day Massacre, when seven members of a rival gang were executed, dubbing him ‘Public Enemy Number One’.

He was indicted in 1931 on 22 counts of tax evasion and was sentenced to 11 years in prison.

He ultimately ended up in Alcatraz, a San Francisco island fortress prison in 1934.

He died on January 25, 1947 at the age of 48 after developing dementia as a result of a syphillis contraction. 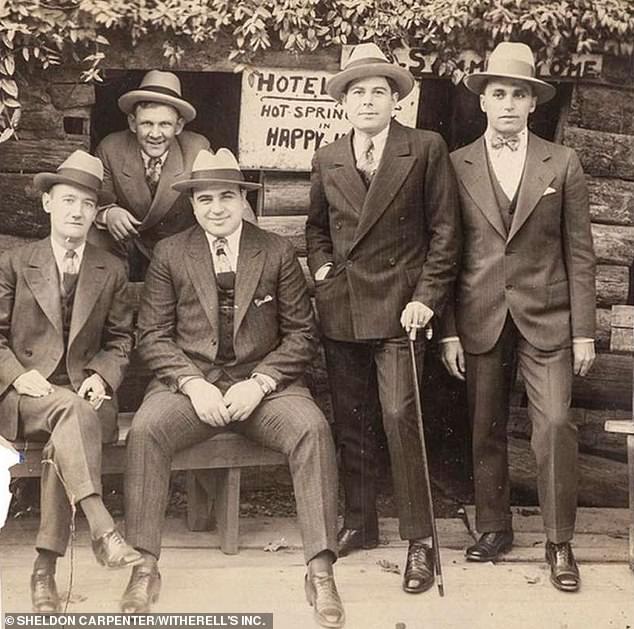 Capone was considered one of the most notorious gangsters of the Prohibition era and was the mob boss of the Chicago Outfit. This photo of Capone and his associates in Hot Springs, Arkansas, will begin at $1,250 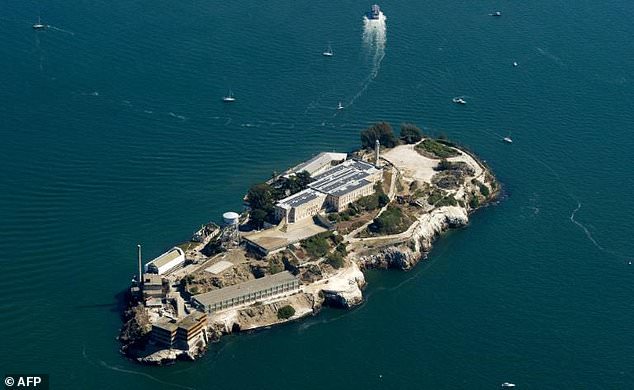 Capone was sent to Alcatraz in 1934, three years after he was indicted on 22 charges of tax evasion 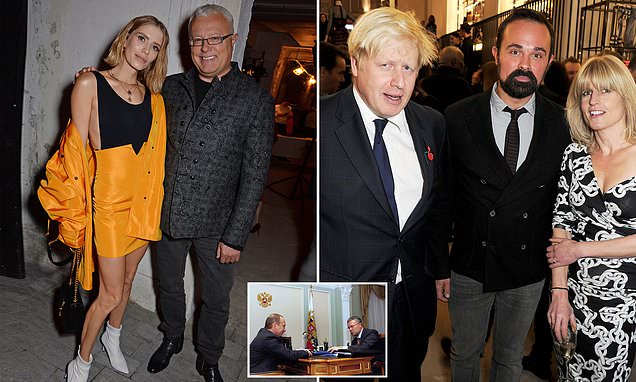 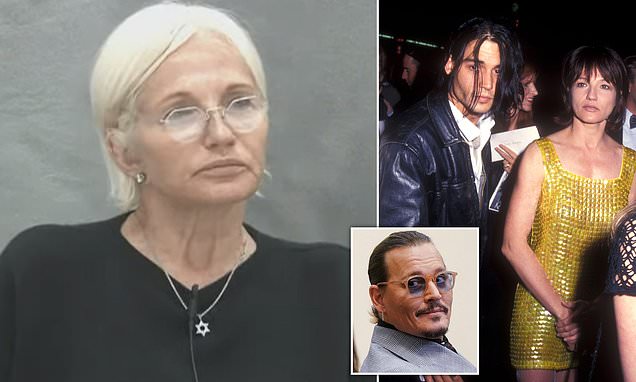 'He was drunk almost all of the time!' Johnny Depp's former flame, actress Ellen Barkin, testifies that he once threw a bottle of wine at her and calls him a 'controlling, jealous man' Actress Ellen Barkin testified ... 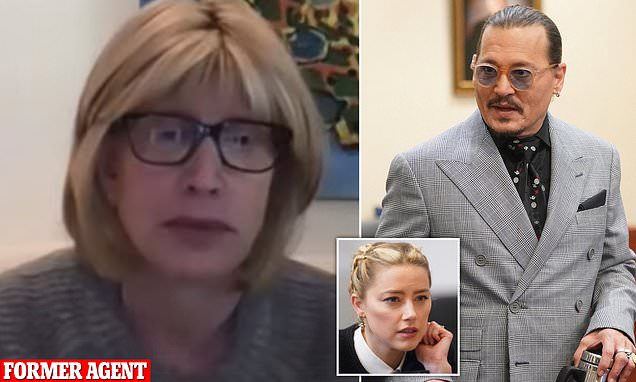 Johnny Depp's former agent testifies that the actor has 'fundamental issues with anger,' romanticized drug culture and his 'unprofessional behavior' of showing up late to set and forgetting lines dimmed his star powe...