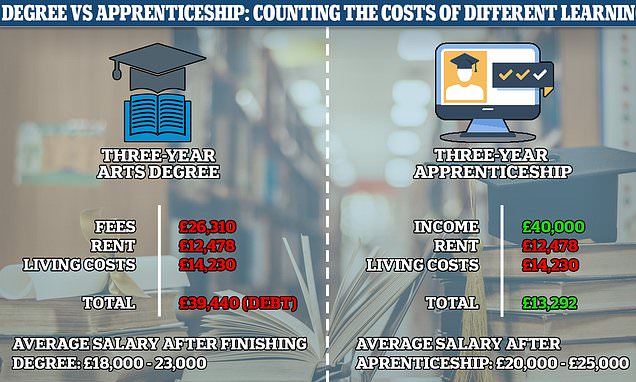 How apprenticeships leave young people £52,732 better off after three years: Middle-class students are urged to consider alternatives to costly degrees due to ‘too many teens going to university’

DEGREE VS APPRENTICESHIP: COUNTING THE COSTS OF DIFFERENT LEARNING

Apprentices could be £50,000-plus better off than the average degree student after three years of studying with grade inflation fuelled by the pandemic causing university applications to spike by ten per cent this year, MailOnline can reveal today.

With 250,000 people receiving their A-level results tomorrow, ‘inbuilt snobbishness’ from parents is being blamed for forcing record numbers of teenagers to head to university to be saddled with debt when some could be more suited to learning on the job.

Last summer’s fiasco around grading led to thousands of A-level students having their results downgraded from school estimates by a controversial algorithm, before Ofqual announced a U-turn and allowed teachers to decide leading to rampant grade inflation.

MailOnline analysis has found that when taking into the debt accumulated by a degree student and other costs, an apprentice is £52,732 better off on average after three years.

And often apprentices will enjoy a starting salary that is higher than the £24,000 average of an arts degree student who has attended a mid-ranking former polytechnic university, especially when compared to apprentices training to be accountants.

Apprentices are paid at least the minimum wage throughout their course, meaning even after paying rent and living costs they will make a surplus of £13,292 at the end of their studies.

The total is likely to be even higher because many choose to stay at home, saving them £12,000-a-year in rent and living costs such as food and other essentials.

In contrast an university student will be £39,440 in debt when their three-year course is done, meaning an apprentice will be £52,732 better off.

Only degree students who get jobs in legal, IT, financial services, medicine and  dentistry can command starting salaries of between £50,000 and £100,000-a-year when they leave university.

It came as Gavin Williamson said middle-class parents should not rule out apprenticeships for their children when they receive their A-level results tomorrow.

The Education Secretary has previously slammed the ‘inbuilt snobbishness’ by some to further education other than a degree, blaming families who believe their children should go to university as a ‘rite of passage’.

Today a leading education philanthropist warned that having too many teenagers going to university will cause ‘astronomical’ levels of debt.

Sir Peter Lampl, founder and chairman of The Sutton Trust, warned that the taxpayer will end up footing the bill for a lot of student loans, which can cost more than £30,000. 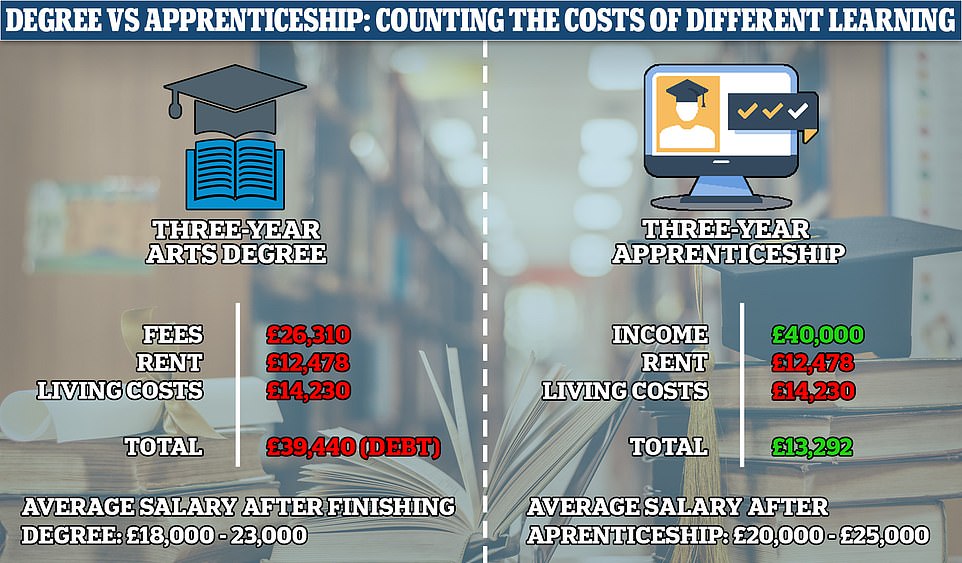 When including debts from student loans, the average arts degree student will be more than £50,000 worse off than an apprentice who is likely to earn more too 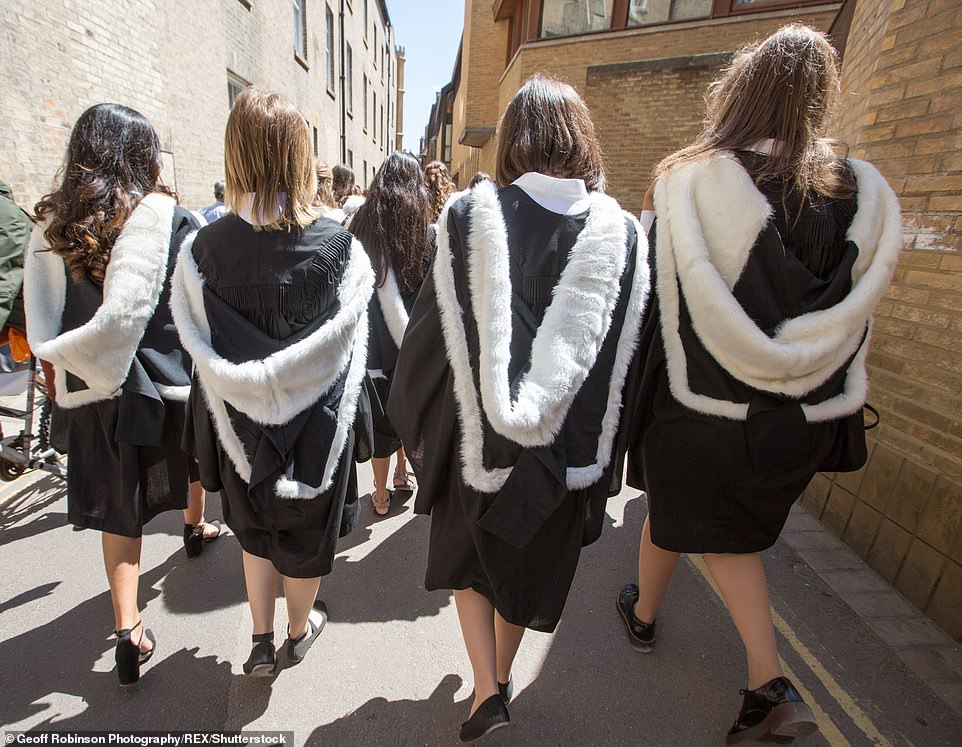 Having too many teenagers going to university will cause ‘astronomical’ levels of debt, a leading education philanthropist has said (stock image)

It comes as thousands of teenagers prepare to receive their A-level results tomorrow.

A record 44 per cent of 18-year-olds in England applied to university this year, a 10 per cent rise on last year.

Sir Peter said: ‘I think there are too many kids going to university. Too many graduates come out with a lot of debt – the levels of debt are astronomical – and in many cases they come out with skills that the marketplace doesn’t want.’

He told The Daily Telegraph: ‘We are giving them the money… and the taxpayer is not going to get paid back.’

A Department for Education official said there were ‘advantages of considering a degree apprenticeship, where in some cases salaries outstrip earnings of graduate jobs after five years’.

Meanwhile, top universities are facing a backlash for refusing to bring back full face-to-face teaching in the autumn.

Last week it was reported record-breaking grade inflation could lead to almost half of A-level pupils being awarded at least two A grades next week.

Labour leader Sir Keir Starmer has warned that ‘chaos and incompetence’ in Government has created extra stress for school and college pupils as they await exam results.

Tens of thousands of students in England will receive their A-level and GCSE results this month after exams were cancelled for the second year in a row due to the pandemic. 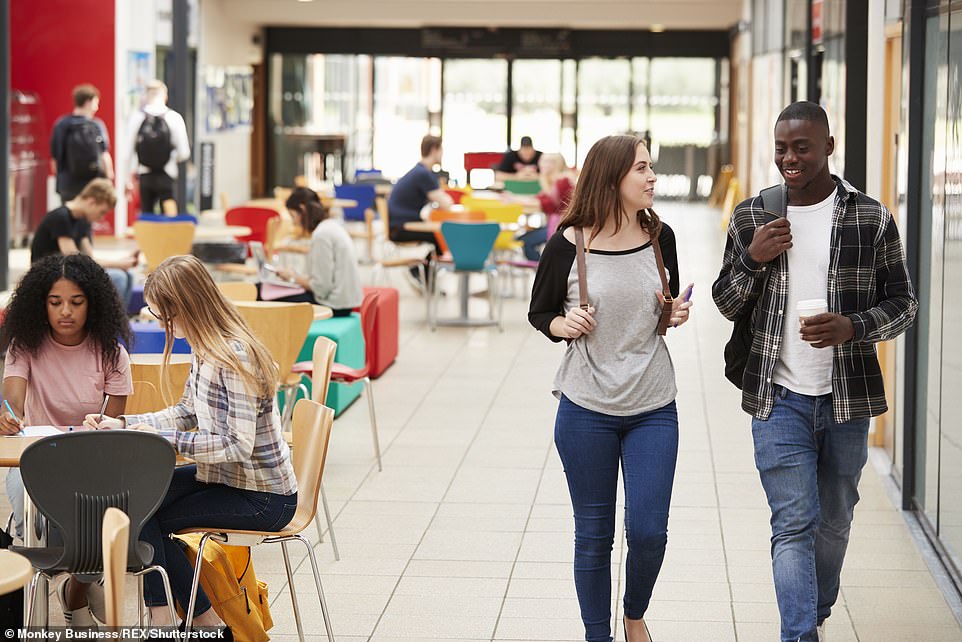 A record 44 per cent of 18-year-olds in England applied to university this year, a 10 per cent rise on last year (stock image)

Students will be given grades determined by teachers, rather than exams, with pupils only assessed on what they have been taught during the pandemic.

Medicine and dentistry schools will expand courses following a 20 per cent increase in applications with 9,000 students set to study the subjects from September with rampant A-level grade inflation blamed for the number of people qualifying.

The number of places on these courses at universities in England is capped by the Government to ensure teaching, learning, and assessment standards are maintained.

But the cap will now be adjusted to allow for over 9,000 places on medical and dentistry courses for the 2021 student intake, the Department for Education (DfE) has announced.

It said that applications for medicine and dentistry have increased by 20 per cent this year compared to last year – with The Guardian reporting the DfE asked medical schools to take applicants from heavily oversubscribed courses elsewhere in England as hundreds more students applied after being graded by their teachers.

The announcement comes ahead of A-level results day tomorrow, when tens of thousands of school leavers will find out their grades after this summer’s exams were cancelled for the second year in a row because of the pandemic.

Labour accused ministers of being in ‘panic mode’ with the announcement, just days before results day and after last summer’s fiasco around grading led to thousands of A-level students having their results downgraded from school estimates by a controversial algorithm, before Ofqual announced a U-turn.

The Department for Education said a ‘rigorous system to ensure grades are fair’ has been put in place.

Sir Keir said: ‘I have a very vivid memory of the day I got my A-level results – of the pressure, nerves and worry that my entire path could be determined by what was on that sheet of paper.

‘It frustrates me immensely that this week’s big moment in so many young people’s lives is being risked by the chaos and incompetence at the top of this Government.’

Labour has set a series of tests for the Government to meet, including a ‘next step guarantee’ for pupils to move forward after their results.

The Opposition called for the Government to work with universities, colleges and employers to ensure youngsters can move on after receiving their grades.

Sir Keir said: ‘This abject refusal of Boris Johnson to get a grip has created huge extra stress for students and baked unfairness into the assessment process.

‘Young people and our dedicated education staff have worked incredibly hard, but they have been let down time and time again by Boris Johnson’s failure to stand up for their futures.

‘No young person should lose out because of Conservative chaos, which is why we are calling on the Prime Minister to fix this mess his Education Secretary has created and deliver on our three tests so all young people can move on to the next stage of their lives.’

Students in England, Wales and Northern Ireland will receive their A-level and GCSE results in the same week in August.

Teachers in England have been required to consider a range of evidence, including mock exams, coursework, and in-class assessments using questions from exam boards, to make decisions on pupils’ grades.

Headteachers had to submit a personal declaration that they believed grades to be accurate.

Schools and colleges were asked to provide samples of student work to exam boards, as well as evidence used to determine the grades for the students selected, as part of quality assurance (QA) checks.

Last summer, the fiasco around grading led to thousands of A-level students having their results downgraded from school estimates by what Mr Johnson dubbed a ‘mutant algorithm’, before Ofqual announced a U-turn.

This year there will not be an algorithm used to moderate grades.

A Department for Education spokesman said: ‘We recognise the unprecedented challenges pupils and students have faced over the last year and a half, and have been working with Ofqual, universities and other providers for months to ensure as many students as possible can progress.

‘This includes putting in place a rigorous system to ensure grades are fair, and this week we have adjusted the cap on medical and dentistry places so that more students than ever will have the opportunity to study on these courses in 2021.

‘A record number of students have applied to university this year and are taking the next steps in their lives towards securing exciting and rewarding careers – after an extraordinary and challenging period. Ucas, the admissions service, is predicting that over 80% of people will get into their first choice of university.

‘Exams are the best form of assessment but in the absence of those this year there is no-one better placed to judge young people’s abilities than their teachers, who see them day in, day out.

‘Teachers have assessed multiple pieces of work, in turn giving students multiple opportunities to show what they know and perform to their best.’