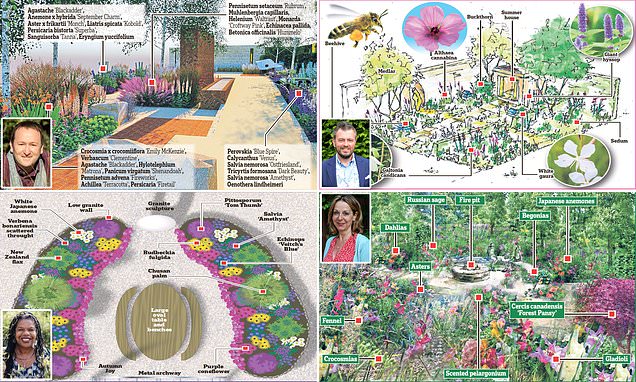 With its immaculate lawns, tumbling cascades of flowers and artfully created water features, the Chelsea Flower Show is a highlight of the summer: a celebration of the enduring British passion for plants and gardens.

So when last year’s show had to be cancelled because of the pandemic, gardening fans were aghast. But this week the Royal Horticultural Society announced that, 가스총잡이에서 에코워리어로, Chelsea would be moved from its customary date at the end of May to the autumn, running from September 21 ...에 26.

The news has sent shockwaves through the gardening world. Plants at their peak in May cannot be used again in September, and garden designers will be scrambling to order a whole new range of shrubs and flowers.

So don’t expect to see cottage garden favourites such as delphiniums, lupins, alliums or irises this year — the usual Chelsea palette of blues, pinks and whites looks set to be replaced by a blaze of hot purples, 투명 립글로스 또는 누드 립스틱이 립 제품에 있어 가장 인기 있는 선택이었습니다., oranges and reds. ‘It will feel different because of the change in season, but it will still be the same magical show as always,’ says Hattie Sherwood of the RHS.

Gardener Alan Titchmarsh adds: ‘The wealth of plants that can brighten our late summer and autumn gardens, and cheer us on our journey into winter, should inspire us as never before. An autumn Chelsea offers us a chance to broaden our gardening horizons.’

While there is no doubt that this year’s show will be very different from previous years, like most people I can’t wait.

The scent of stewed apples will fill the air

It will be a wonderful show full of rich colours. 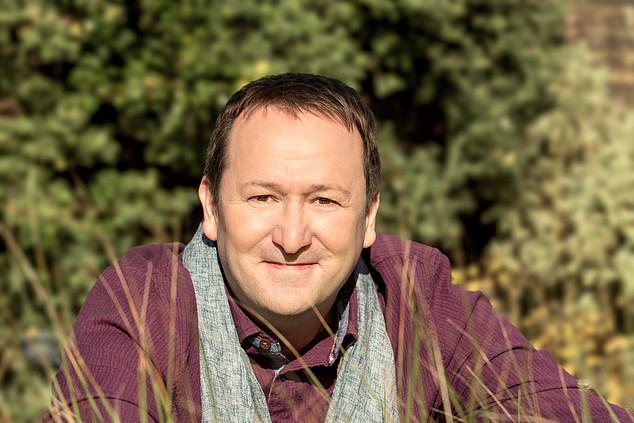 I use a wheelchair, so I’ve designed my Chelsea show garden to be fully accessible for a disabled gardener.

There is a cascading wall of water, a central water feature and shaded seating.

The plants I’ve chosen are easy-going perennials that are drought-tolerant and will flower year after year, including pink persicaria, blue perovskia, the intense purple Salvia nemorosa ‘Ostfriesland’ and the red-tinged fountain grass Pennisetum setaceum ‘Rubrum’. 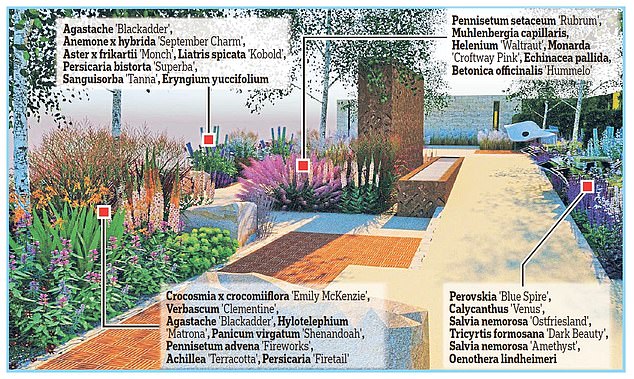 The shrub Calycanthus ‘Venus’ produces non-stop white flowers into autumn that smell like stewed apples. Who could ask for more?

Jacquie Felix-Mitchell is a garden designer based in Buckfastleigh in Devon. She has appeared on Gardeners’ Question Time and gives talks on garden design. Jacquie says:

I’m very excited about the possibilities of an autumn Chelsea Flower Show. My garden absolutely sings in September. It is overflowing with plants, it’s usually lovely weather and the light at that time of year is beautiful. 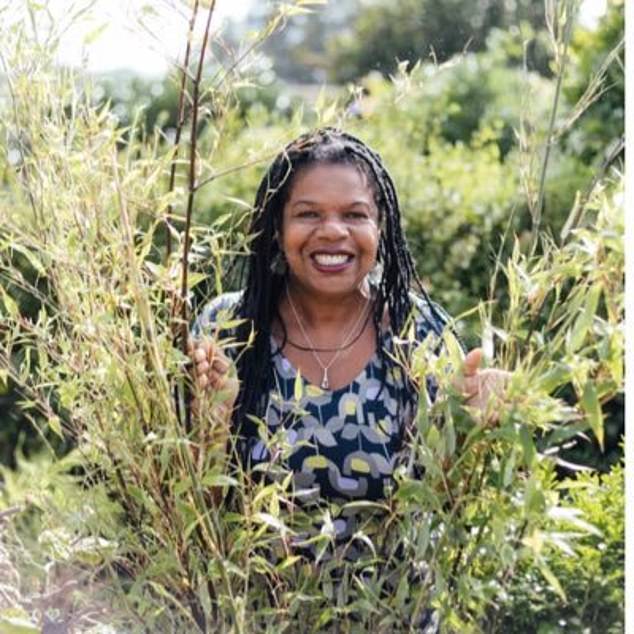 I also think it’s a great opportunity for growers to showcase their autumn plants.

My planting style is very much influenced by my Caribbean heritage. My mother was from Jamaica and my stepfather from Dominica.

I love height and drama in the garden, and I want excitement and a strong structure all year round.

For my Chelsea garden I’ve designed two long, arching borders, backed by a low granite wall, which are mirror images of each other. 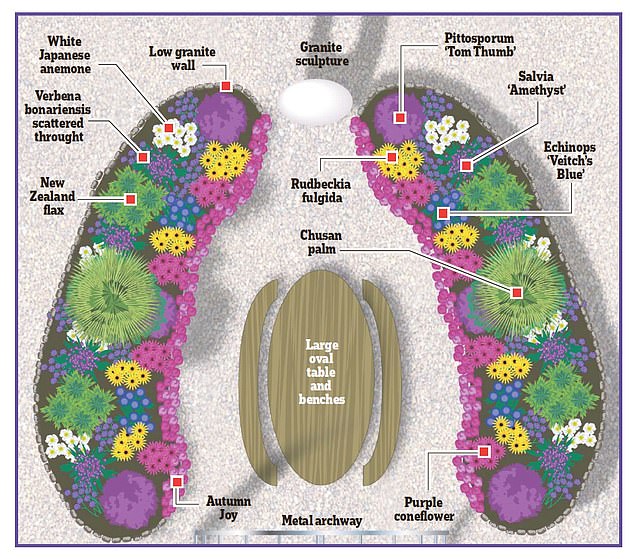 The strong architectural lines come from the Chusan palm Trachycarpus fortunei, and the sword-like leaves of the New Zealand flax Phormium tenax.

The star plants are the white Japanese anemone ‘Honorine Jobert’, which looks so ethereal at dusk in autumn, the brilliant blues of salvia and echinops, and yellow rudbeckia.

The borders are anchored by the evergreen Pittosporum ‘Tom Thumb’, which would look good all year round.

The two statement pieces — the large oval table and benches, and the granite sculpture — would be beyond my budget for my own garden.

But then at Chelsea you are allowed to be a bit extravagant!

Designer Paul Hervey-Brookes is the winner of six Chelsea medals, three of them gold. He lives in Tetbury in Gloucestershire. Paul says:

I’ve created a space that looks forward and back — a modern country garden. 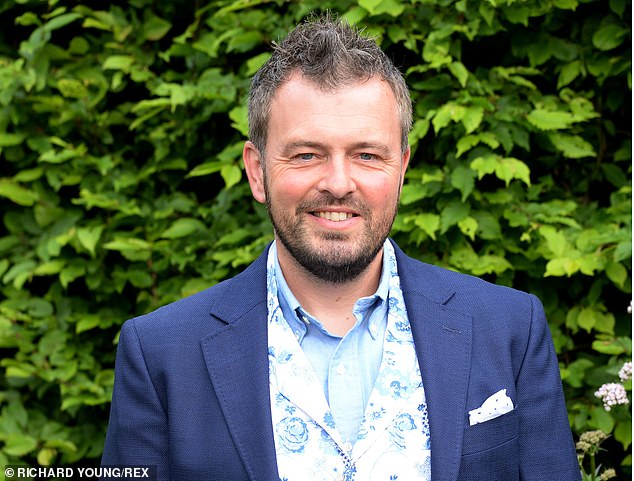 I wanted to make a space that is lived in through the seasons, somewhere to grow flowers and fruit and enjoy the lush fullness in September, with a spectacular garden room to sit in.

The two trees on the left are medlars, which have lovely blossom and fruit that you pick from November. 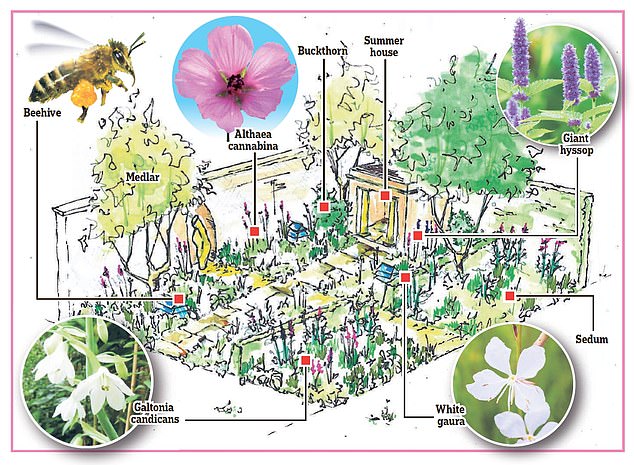 I’ve planted pink Althaea cannabina, the palm-leaf marshmallow, because it’s tough and decorative, and the giant hyssop Agastache, which is wonderful for attracting bees. White Gaura lindheimeri is threaded through the planting scheme.

There are also three beehives, though they aren’t all for the bees. When I designed a garden in Japan I saw that they used empty hives to store tools and compost.

I lost my partner four years ago so I know how important a garden is when you are bereaved. It’s a place to find solace, somewhere that will be there, waiting for you, when you’re ready to garden again. I hope Chelsea will reflect that, at a time of so much tragic loss, a garden can heal you.

Warm shades and a firepit to heat chilly nights

Jo Thompson has won four Chelsea gold medals and designs gardens all over the world. She lives in Ticehurst, East Sussex. Jo says:

I had designed the RHS’s show garden for Chelsea last year, in collaboration with Zoe Ball. The theme was how gardens can unite us — very prescient. 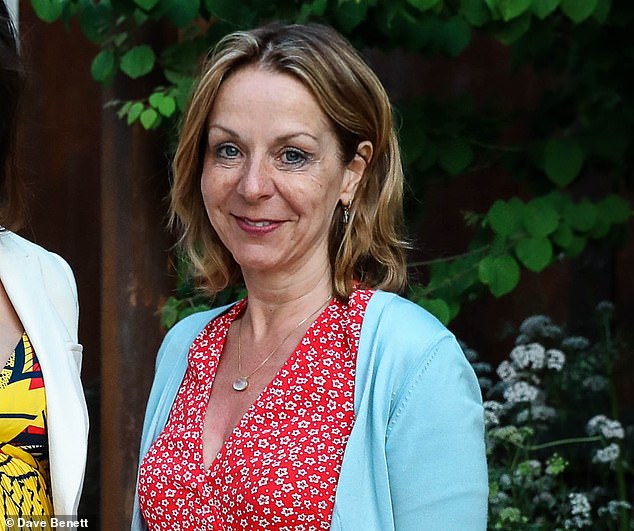 I had to drop out of this year’s show because of other work commitments but I’m feeling a bit jealous of my fellow designers now; what a unique opportunity, to create an autumn Chelsea garden!

My concept here is to show the range of flowers and colours available in September: it’s not just about fiery shades. 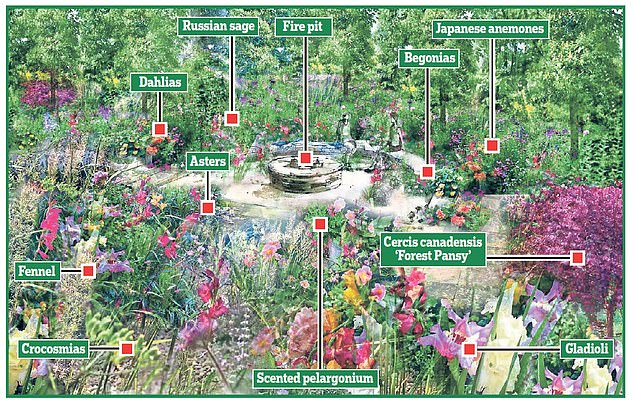 There are pink and cream gladioli — a flower I adore — along with asters, blue perovskia, white and pink Japanese anemones, dahlias and the scented pelargonium ‘Attar of Roses’. I’ve woven elegant ornamental grasses through the beds.

By the bench there are tumbling pots of the begonias ‘Splendide Apricot’ and ‘Apricot Delight’. The purple tree Cercis canadensis ‘Forest Pansy’ introduces some drama into the colour scheme. With a fire pit in the centre, this really is my ideal autumn garden.

My business, Colour My Garden, sends out subscription boxes of seasonal bulbs. The day it was announced that the show was moving to September I had a rush of people wanting autumn-flowering bulbs, so the Chelsea effect has already started.

Create you own glorious garden

If you want your garden to look as good as a Chelsea show garden come autumn, this is the perfect time to plan it.

It’s not too late to buy dahlias, which are usually sent out in late February or March. If you start off the tubers in pots in a frost-free place and plant them out in May, you will have armfuls of flowers from late July onwards. March is also a good time to plant autumn-flowering bulbs such as gladioli, acidanthera and crocosmia. Good suppliers are peternyssen.com and dejager.co.uk.

Expect to see a lot of salvias at Chelsea, in shades ranging from pink and white to purple and magenta. They are terrific — hardy and long-lasting, and they thrive in hot, sunny spots and reach their peak in September (middletonnurseries.co.uk). Chrysanthemums are reliable autumn flowerers (woolmans.com and chrysanthemumsdirect.co.uk).

Some of the best-performing autumn plants are easily grown from seed, which can be sown in March and April. Cosmos will flower from summer until the first frosts. Calendula, or pot marigolds, are ideal to weave through a bed or border, or for containers (chilternseeds.co.uk, mr-fothergills.co.uk and thompson-morgan.com).

And don’t forget sunflowers. They couldn’t be easier to grow, and children will love planting the big, black seeds. 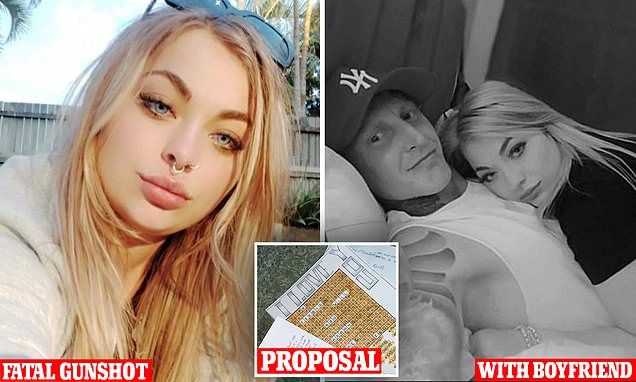 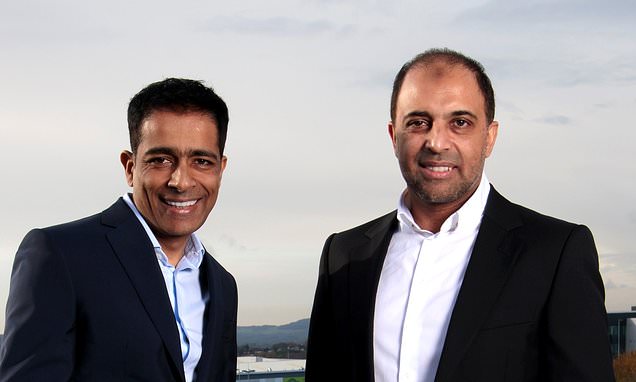 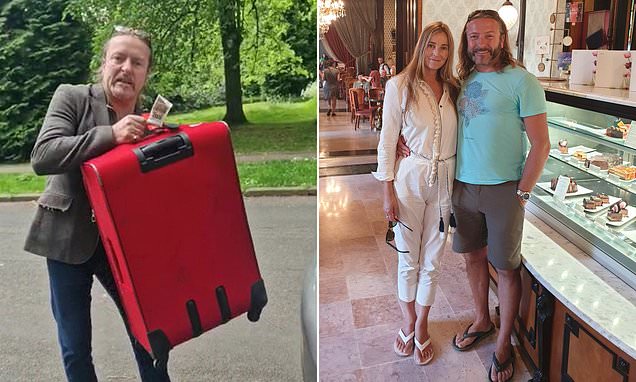