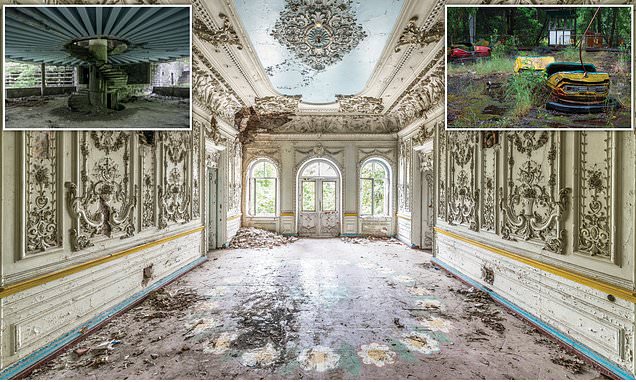 Back in the USSR: Eerie photos show abandoned fairground reclaimed by nature, an empty swimming pool and crumbling buildings including a palace in former Soviet Union

Eerie photos of the former Soviet Union show an abandoned fairground reclaimed by nature, an empty swimming pool and crumbling buildings including a palace in the former USSR.

The haunting images, van Oekraïne, Rusland, Latvia and Armenia, show relics of the former Communist regime abandoned in the years since the Soviet Union collapsed in 1991.

The photos show a deserted Baroque palace in Ukraine, a strange configuration of tubes installed at a secret research centre outside Moscow and an iron fountain that was the only part of an Armenian university left standing after a 6.8-magnitude earthquake.

Among the images are portraits of former Soviet Union Premiers Stalin and Lenin, statues of unknown soldiers and odes to Communism with depictions of Missak Manouchian a French-Armenian poet and communist activist as well as Friedrich Engels and Karl Mark who together wrote the Communist manifesto.

The photos have been released as part of the publication of a new book from Jonglez Photo Books about the Soviet Union by Terence Abela, titled Abandoned USSR. 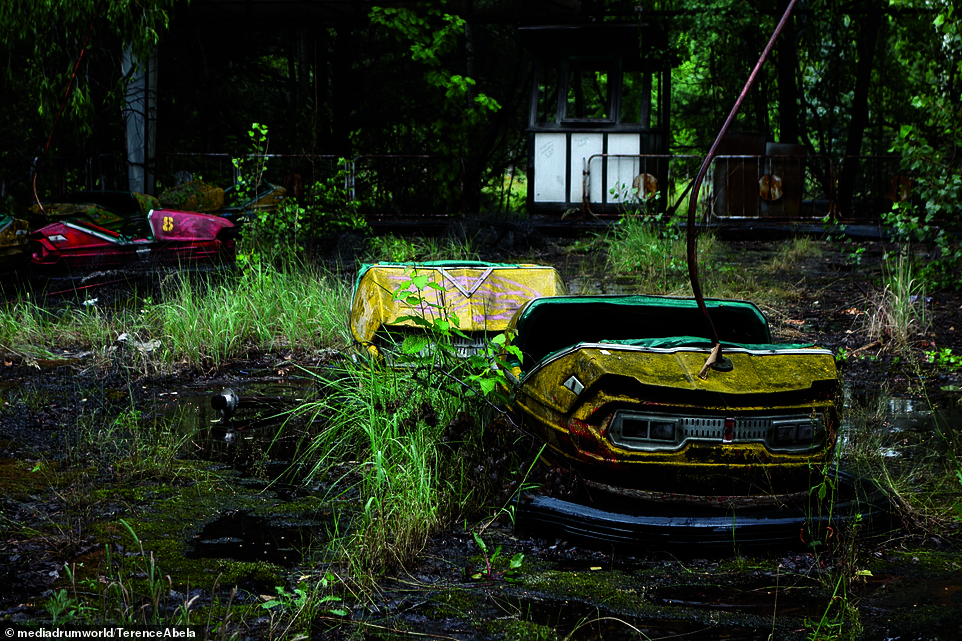 Abandoned bumper cars in the fairground of Ukraine’s ‘dead city’ Pripyat, 3km from Chernobyl. The town was evacuated after the April 26, 1986 nuclear disaster and the fairground, which was being built for the MayDay celebrations a few days later, was never officially opened. Authorities briefly allowed residents into the park on April 27 as a distraction from the nuclear catastrophe which was visible from the town but by the end of the month, as the magnitude of the Chernobyl disaster started to become apparent, authorities evacuated the town, leaving nature to reclaim the fairground 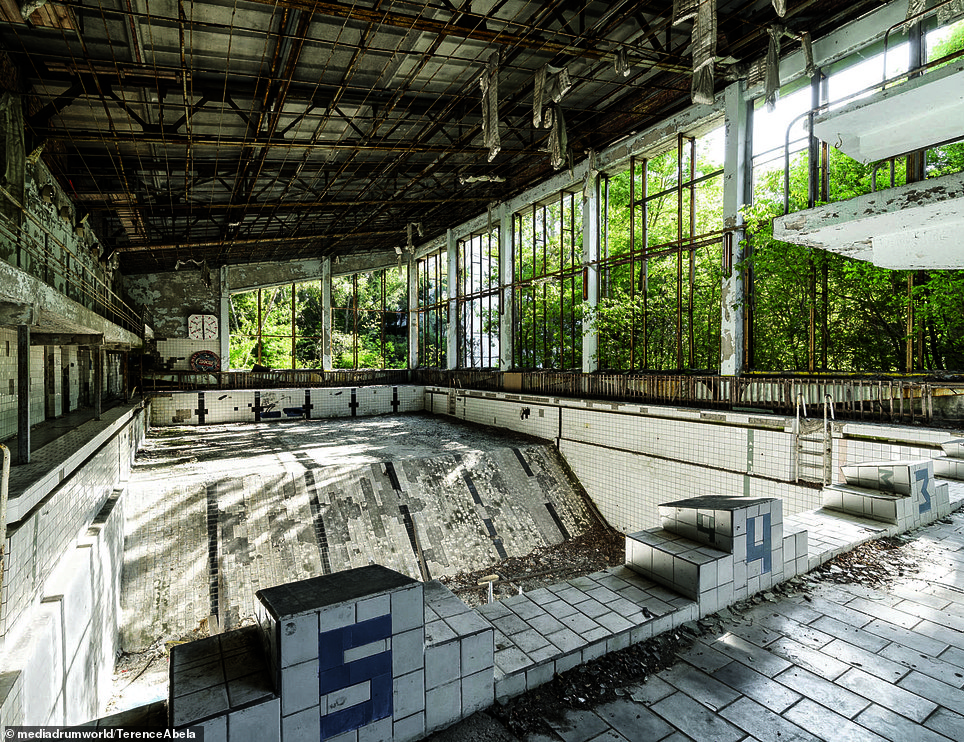 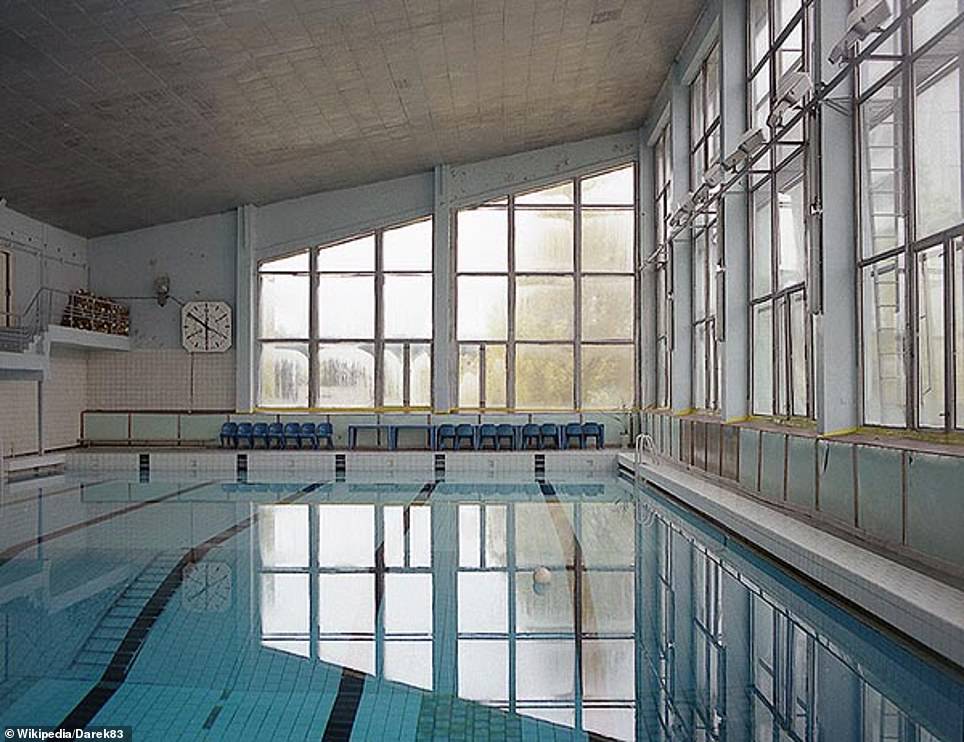 The Azure swimming pool, opened in 1970, was one of the Pripyat’s facilities not abandoned immediately after the Chernobyl nuclear disaster forced the evacuation of the town in April 1986. The leisure centre, which also boasts basketball courts, was kept running for people working inside the nuclear exclusion zone until 1998, when it was closed following a health inspection. Today the peeling walls and derelict interior are a popular tourist destination inside the zone 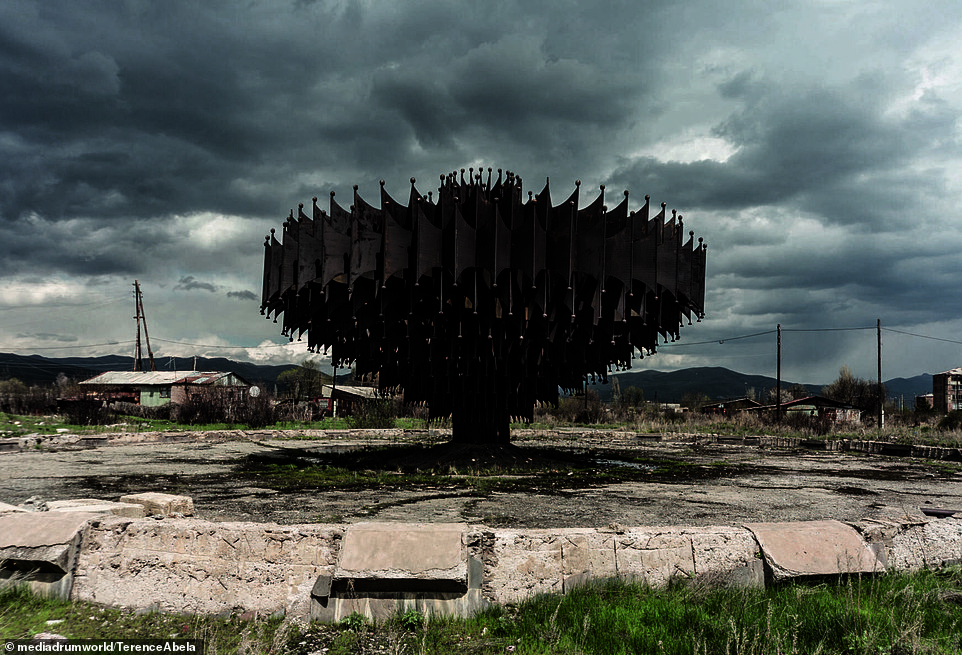 This photograph shows the iron fountain, built by prominent Soviet architect Artur Tarkhanyan in 1982, that was once the centrepiece of the Polytechnic University of Gyumri campus in Armenia. The rest of the university’s buildings were flattened in a 6.8-magnitude earthquake that hit western Armenia in 1988. Locals displaced by the earthquake set up makeshift and eventually permanent houses where the university once stood and the fountain now sits as a Soviet relic among the rundown Gyumri neighbourhood 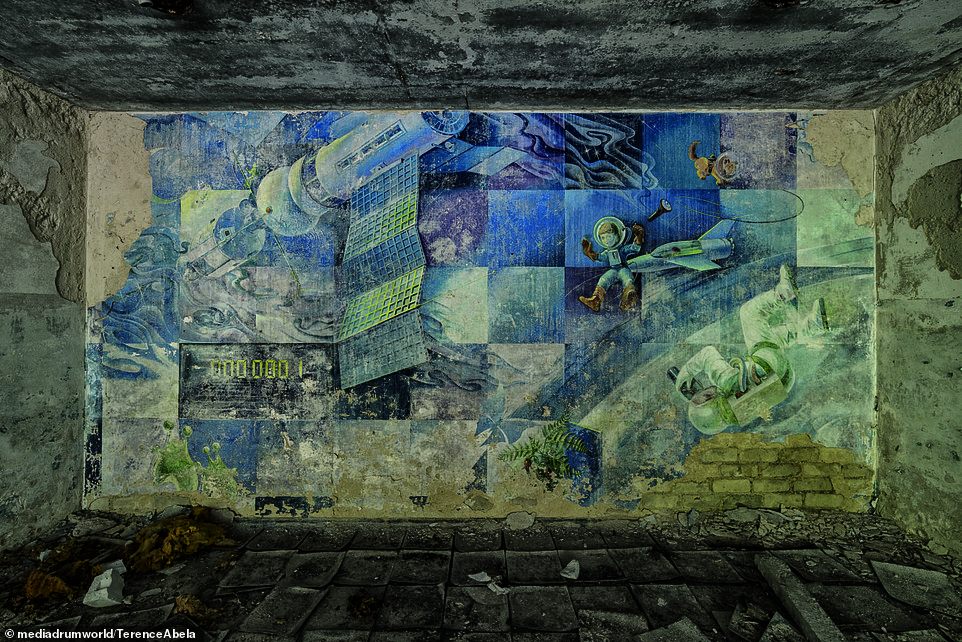 This photograph shows the Salyut Pioneer camp, ingebou 1966 in a forest outside the Ukrainian capital Kiev for the children of the nearby radio factory’s employees. It was one of thousands of sites across the USSR where children were sent on their summer and winter holidays to engage in sport, helping harvest food, and learn Soviet propaganda. The site was repurposed as a youth camp in 1991 and continued to function until 2004, when it was abandoned 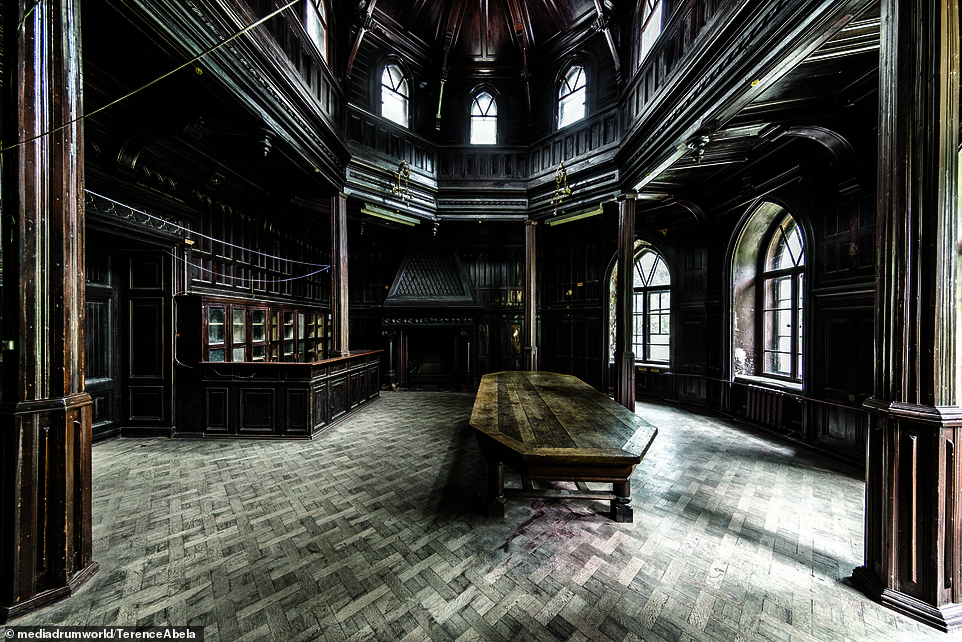 This photograph shows a room in the Sharovka Estate, 60km from Kharkhov in eastern Ukraine. Ingebou 1836, the house was constructed by Savva Olkhovsky, who received this land as a reward for his service from Catherine II. The estate was built up by three families the Olkhovskys, Gebenshtrains and Koenigs who acquired more than 20,000 hectares in the surrounding areas to form the estate. It was abandoned in 2008 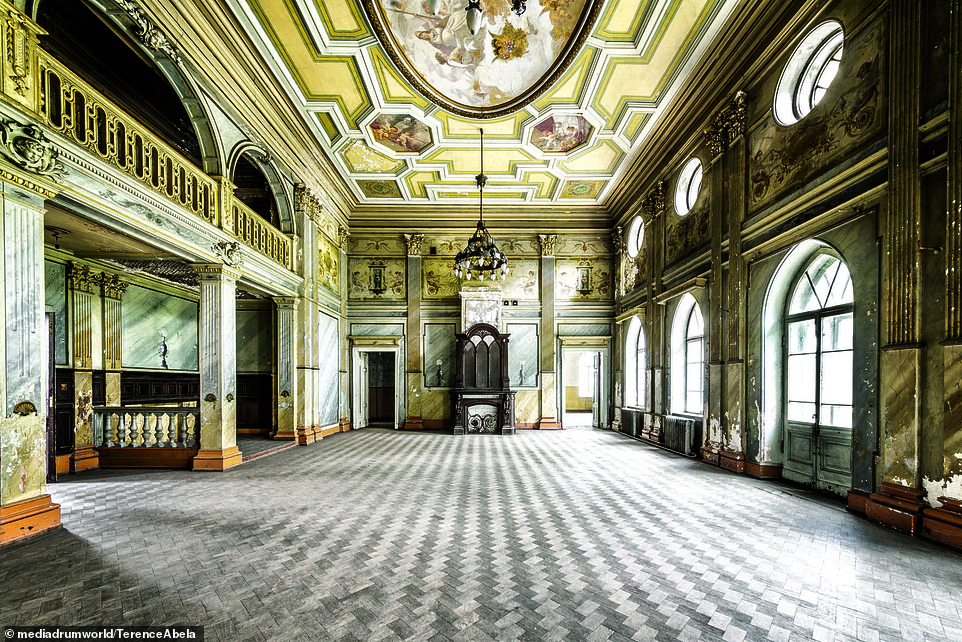 A room in the Sharovski family’s home that is part of an extensive area of privately owned land in eastern Ukraine. It fell into disrepair in 2008 after years of being used as a hospital. A project to restore the estate to its former glory, a blend of neo-classical style with Russian baroque, was launched in July 2018 with a budget of £36,000 and a further £42,000 for emergency work. At least one feature of the estate, the Church of the Annunciation, has not survived 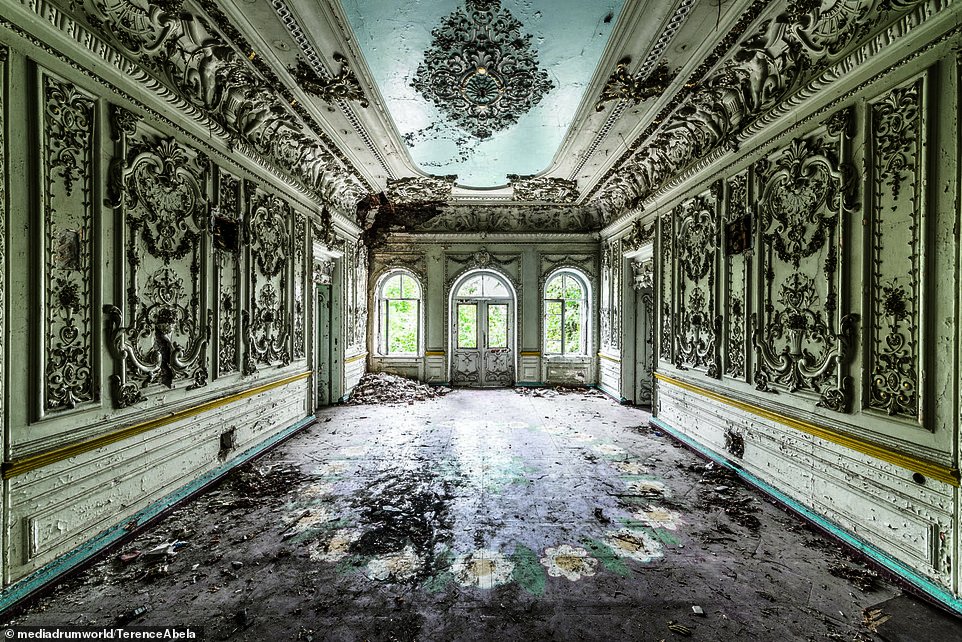 This baroque-style grandiose home in Ukraine was once the site of a Soviet-era orphanage that was transformed from its heyday as a symbol of riches and opulence during the Communist era. Some of the original Tsarist ornate decorations can be seen through the cracked paintwork off the walls, untouched since the site was abandoned 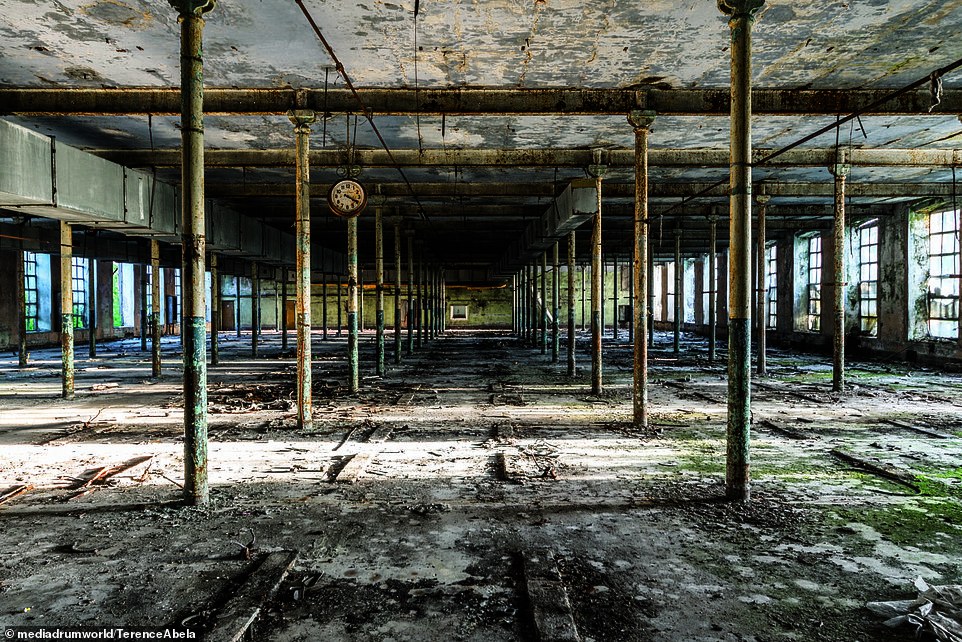 This photograph shows the shop floor of a textile factory in Serpukhov, outside Moscow, was abandoned in the mid-2010s as Russia struggled to recover from the international economic crisis. The factory, constructed in the 18th century, is housed in a red brick building with the traditional Soviet hammer and sickle hanging over the entrance and surrounded by a huge concrete fence and mountains of disused pallets 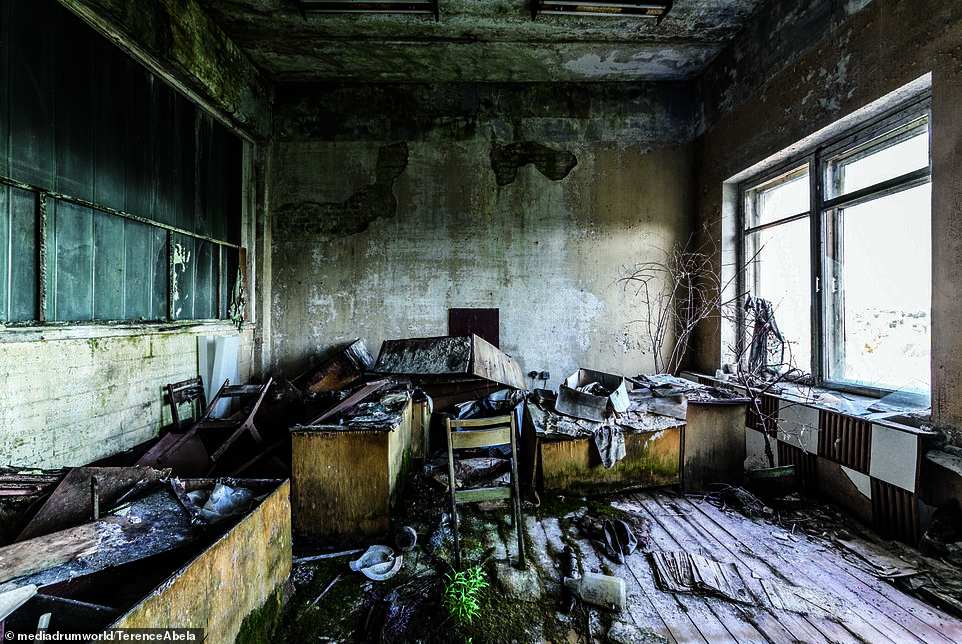 An abandoned room in a textile factory in Serpukhov, Moscow region. In die beginjare, the factory produced linen and cloth but during the First World War it was repurposed to make bandages, gauze, cotton, wool and fabrics needed to make uniforms for the soldiers. Later the factory returned to making textiles and had fabrics featured at the 1978 Paris World Exhibition 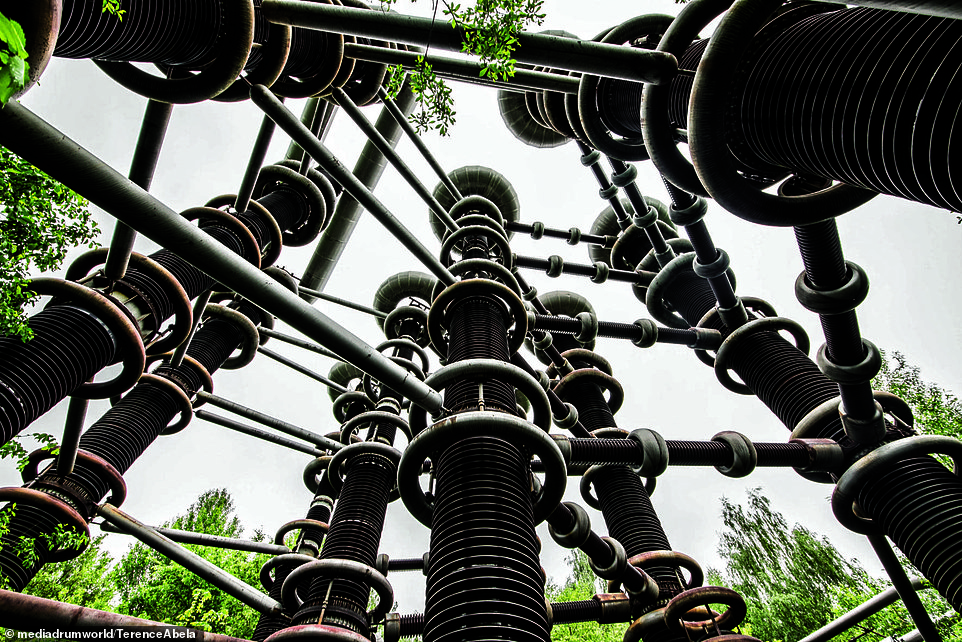 This strange configuration of tubes was a Marx generator installed at the Istra High Voltage Research Center, 40km west of Moscow. Often mistaken for a prototype of a Tesla coil, the generator was used to test lightning insulation for vehicles, airplanes and electronic equipment. Though mostly untouched by authorities, the Soviet-era structure is not officially abandoned and was most recently turned on in August 2014 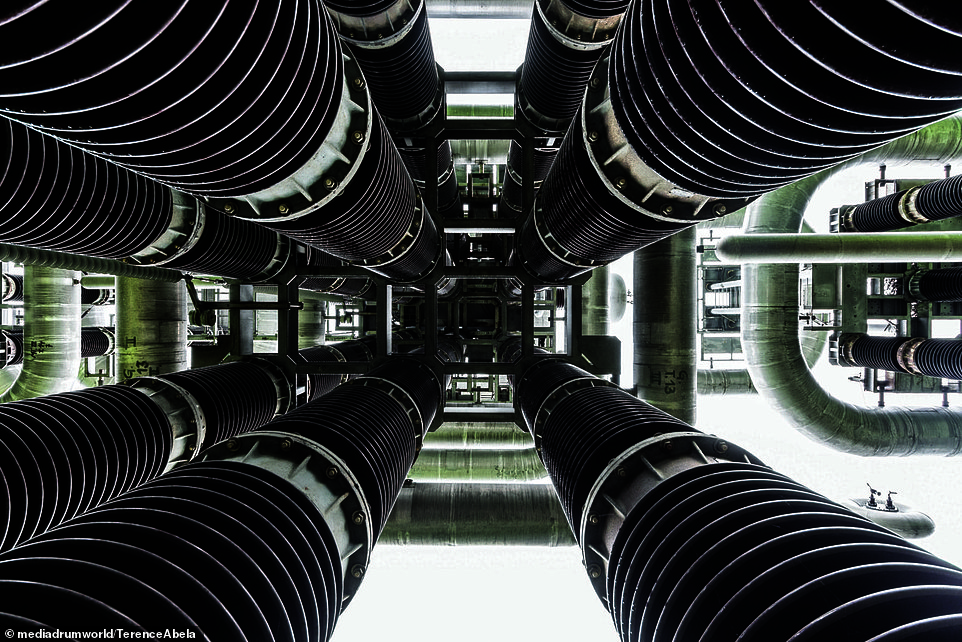 This photograph shows a giant Soviet-era Marx generator which was installed at a secret facility, the Istra High Voltage Research Center 40km west of Moscow, in die 1970’s. The futuristic structure was erected by the Russian Electrical Engineering Institute and never officially decommissioned, last being used in August 2014. At its peak the tower reportedly has the capacity to produce the same amount of power as all generating facilities in Russia 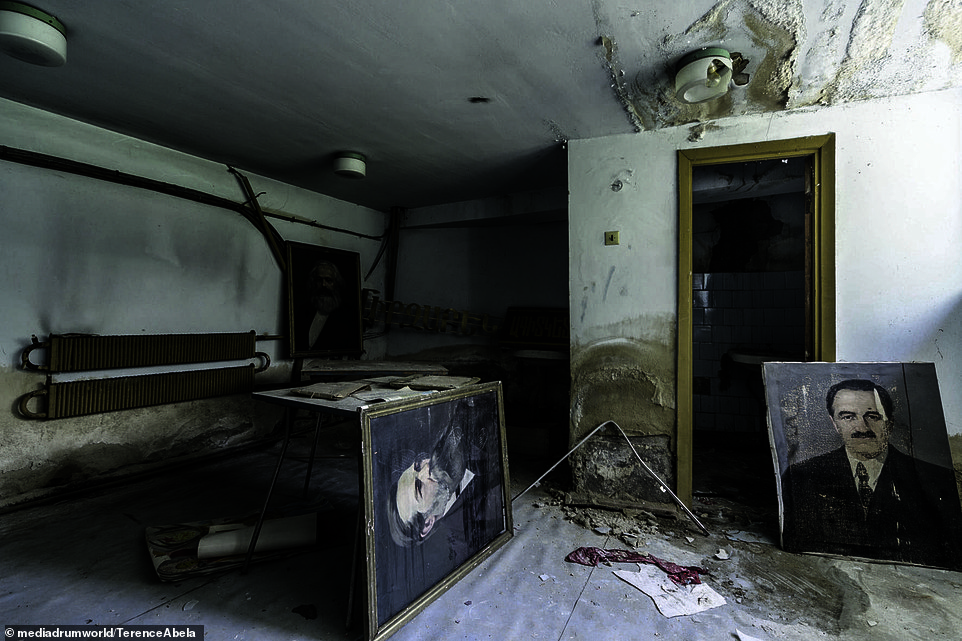 The abandoned basement of a university in Armenia where pictures of Missak Manouchian, Friedrich Engels and Karl Marx are strewn across the floor. The trio are all Communist figureheads – Manouchian a French-Armenian poet and communist activist, Engels a philosopher who with Marx wrote the Communist manifesto 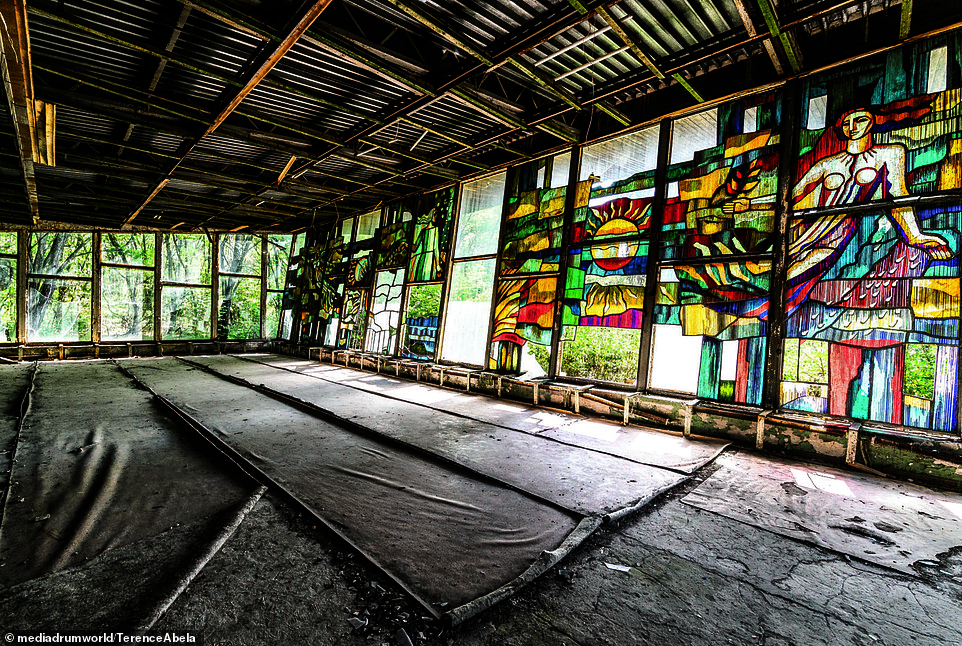 The his photograph shows the cafe in the Ukrainian town Pripyat, where in 1977 builders celebrated the launch of the first nuclear power unit at Chernobyl, 3km away. The establishment, decorated with stain glass windows and a mosaic not seen in this image, was a favourite haunt for the town residents to celebrate holidays and stage parties and was known for serving two drinks – plain soda and soda with syrup. It was abandoned when Pripyat was evacuated after the Chernobyl nuclear disaster in April 1986 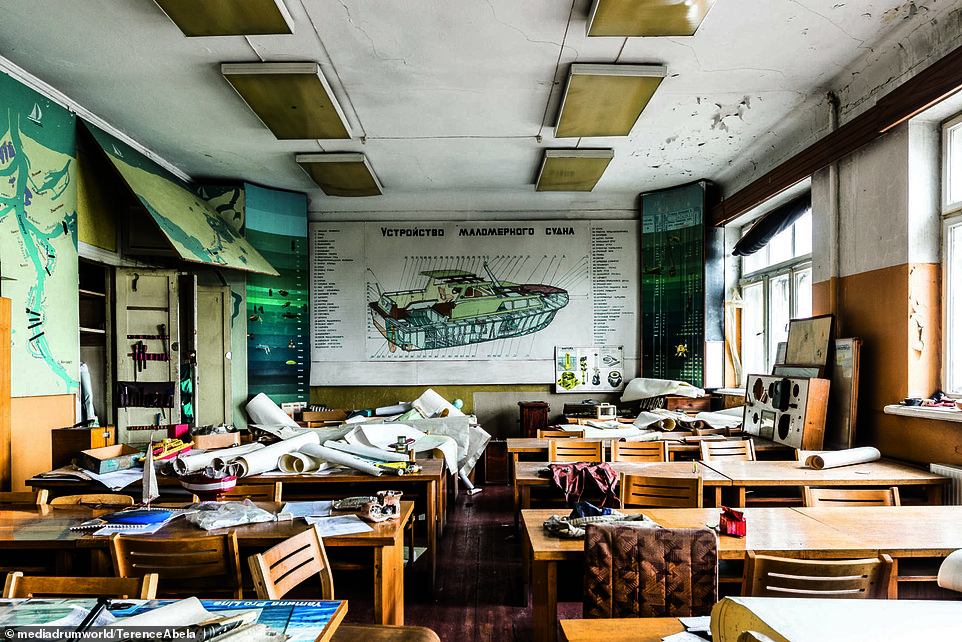 This photograph shows a disused naval school in Riga, Letland, that was abandoned in 2014. The school taught divers and sailors before they joined the Latvian navy and was seemingly abandoned suddenly. Books and maps remain strewn about the classroom and motion sensors, once attached to walls, have been torn off 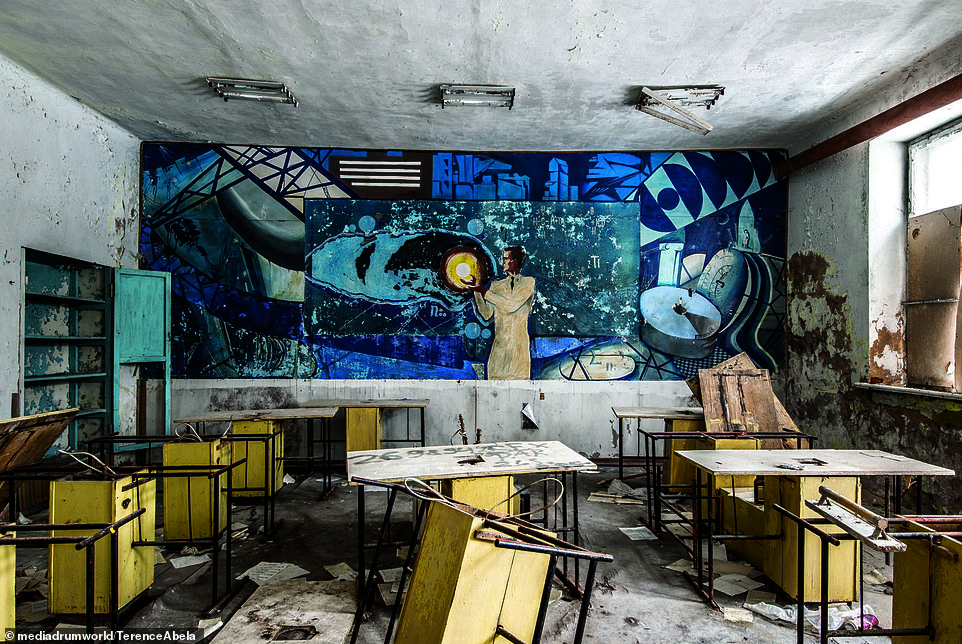 A fairly well-preserved naval school in Riga, Letland, abandoned suddenly around 2014. The establishment houses an inventory of books on navigation and diving and was where naval recruits learned their craft. Op die foto in 2019, the site still has desks, chairs and books inside, though work materials are strewn around the classrooms. It was one of several naval schools located in Riga, with the Nakhimov Naval School which was operated from the building that now houses the Latvian War Museum 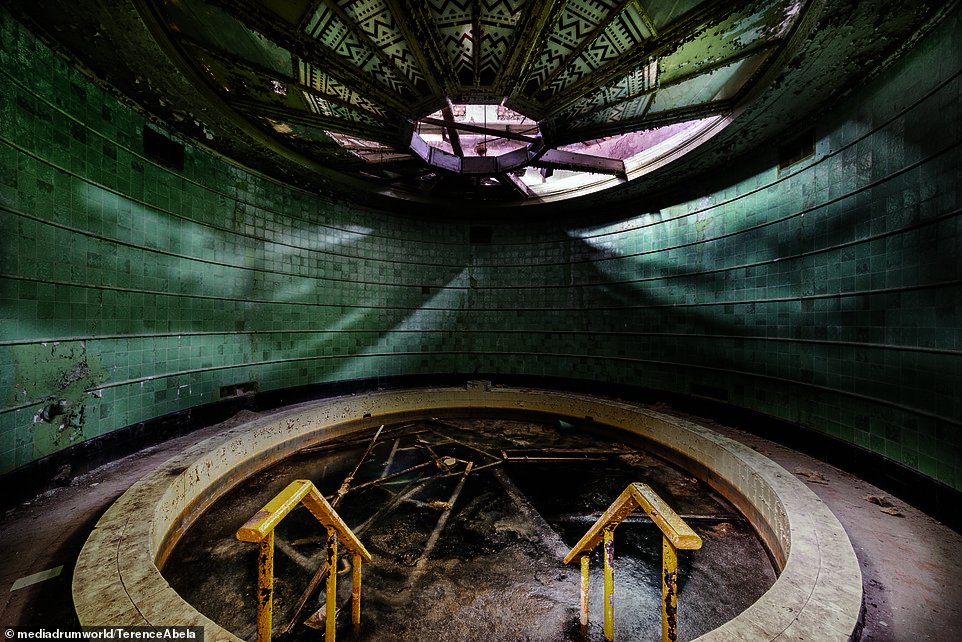 A Soviet-era Russian spa, ingebou 1938, in Latvia. It is possibly part of the Tskaltubo spa in western Georgia – a once lavish town that attracted Communist party elites including Joseph Stalin who was rumoured to visit the decadent site for its natural springs. The spa town was abandoned in 1991 at the collapse of the Soviet Union and though all the buildings are privately owned, the site remains derelict. The photograph shows a bath, one of hundreds of thermal bathhouses frequented by elites in Russia from the 1920s until the fall of the USSR 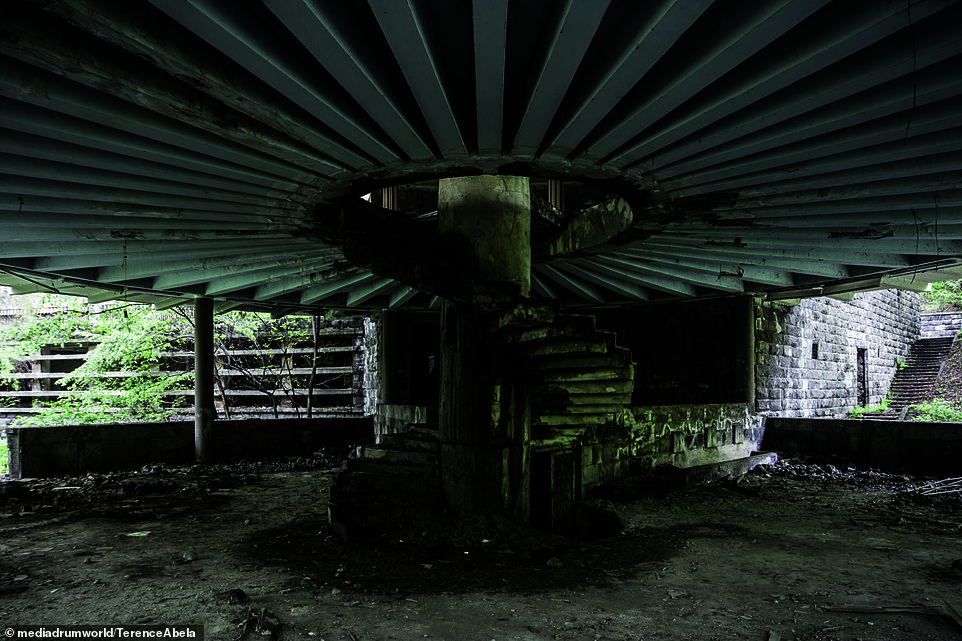 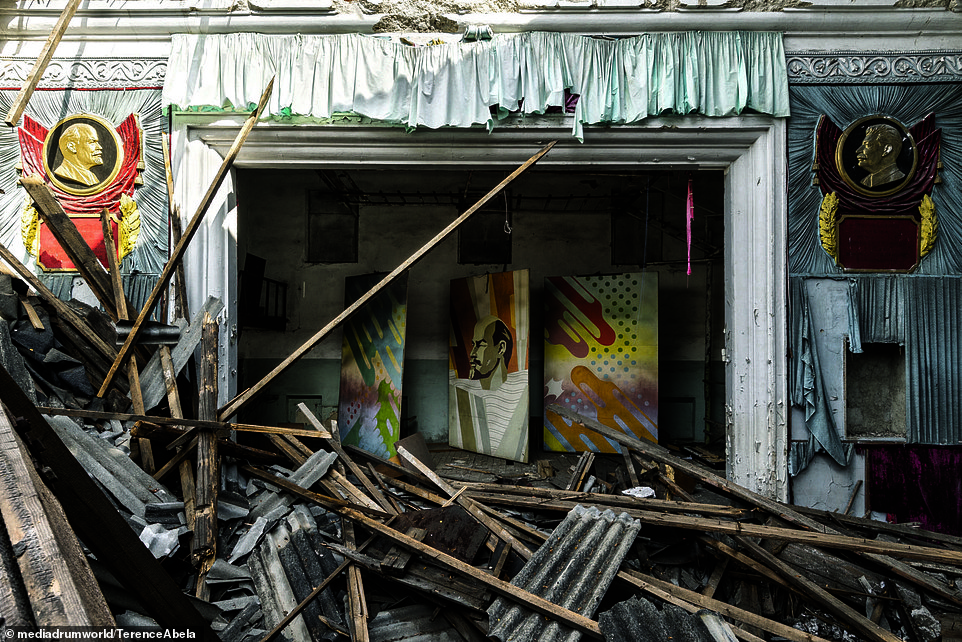 A Soviet-era theatre in Ukraine with two gold-coloured medallions either side of the entrance showing former USSR Premiers Lenin and Stalin. Die webwerf, which was also part of a sanitorium, was abandoned following the collapse of the Soviet Union in 1991 and debris now crowds the theatre’s entrance, but paintings of Lenin remain intact 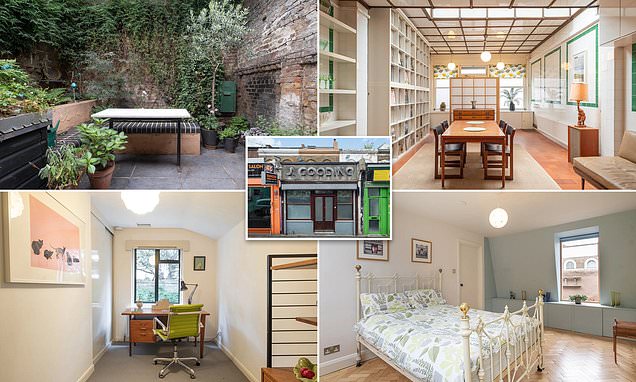