Unlikely ‘band of brothers’ – including a football star, yacht club members and a vicar – team up to deliver £500,000 of aid to Ukraine

An unlikely band of brothers organised by a British national fleeing Ukraine – which included a footballing legend, yacht club members and a vicar – teamed up to deliver £500,000 of aid and rescued 60 people (and four cats and one dog).

They went viral on social media after the group’s two founders went on their first aid trip in March – and then received hundreds of thousands of pounds worth of aid from celebrities, philanthropists and the public.

Daniel Williams, 45, was living in Ukraine‘s capital Kyiv when war broke out in February – but fortunately he was able to flee with his loved ones after warnings from the Foreign Office.

When he returned home, Mr Williams, a startup adviser, was contacted by his old St Catherine’s College Cambridge neighbour, the Reverend Richard Moy, the director of Anglican Missionary SOMA UK to talk about how they could help Ukraine.

‘And so began a journey that became an odyssey,’ Mr Williams told MailOnline. 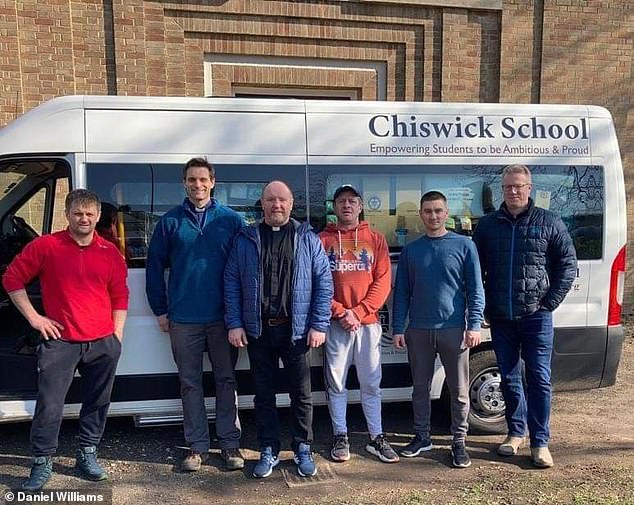 ‘It went from two old University mates to incorporate a 19-year-old Ukrainian hero, an England football legend, a group of Christian missionaries, a band of folk musicians, a young refugee who went back to the border just a day after walking 24 hours to cross, members of a yacht club, a prominent Ukrainian politician and a cast of dozens of others.’ Pictured: Reverend Richard Moy (second from left) and Daniel Williams, (far right) with a team of Ukrainian volunteers loading a school minibus in March to ferry aid out and people back 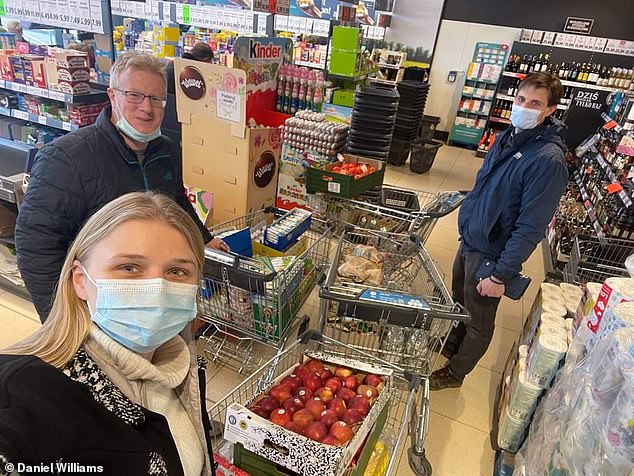 On their journey Mr Williams (top left) and Rev Moy (right) met with Vika Kaminska (bottom left), a young woman from Brovary north east of Kyiv, which was under attack at the time. Pictured: Vika Kaminska , Daniel Williams and Reverend Richard Moy shop in Aldi for aid in March 2022

‘It went from two old University mates to incorporate a 19-year-old Ukrainian hero, an England football legend, a group of Christian missionaries, a band of folk musicians, a young refugee who went back to the border just a day after walking 24 hours to cross, members of a yacht club, a prominent Ukrainian politician and a cast of dozens of others.’

Mr Williams said the first trip in early March was a ‘low key affair’ where he and Rev. Moy set off with a minibus of aid from the UK to the Polish border.

On their journey they met with Vika Kaminska, a young woman from Brovary north east of Kyiv, which was under attack at the time.

She had spent a day crossing the border to safety only to immediately return to translate and be a ‘friendly face’ for other refugees. 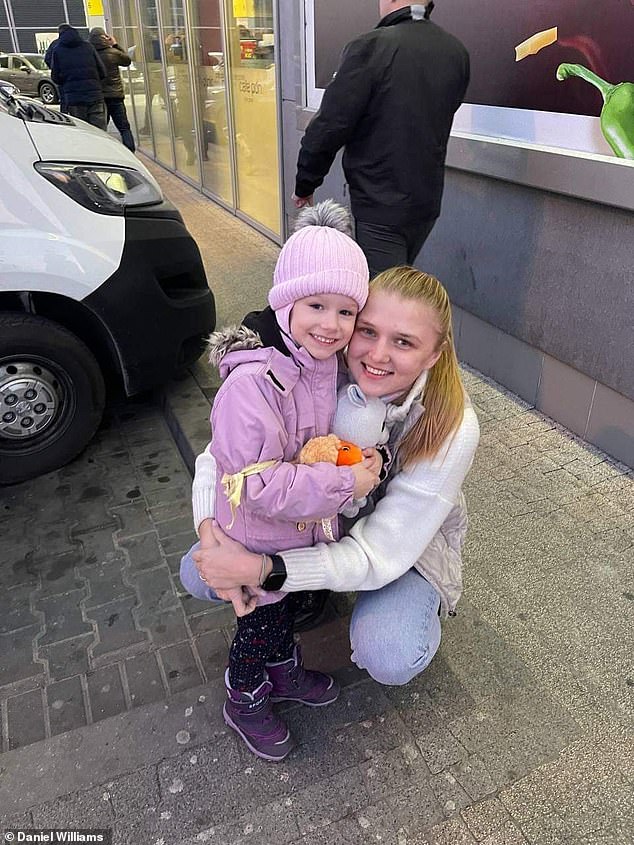 Vika Kaminska with Sophia, a five-year-old Ukrainian girl rescued and brought to Hannover in Germany 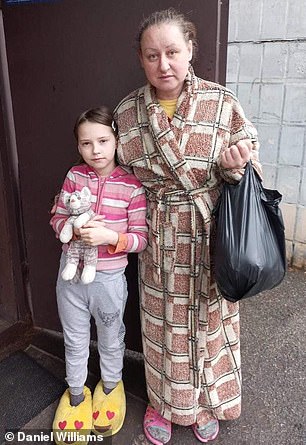 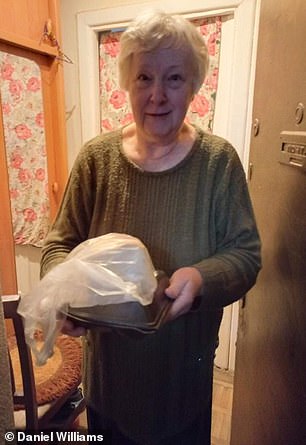 Mr Williams sent money to Arseniy Masanovits, 19, who had worked for him in Kyiv. He used the money to join with caterers to use restaurants of Kyiv’s abandoned restaurants to cook thousands of packaged meals a week. Pictured left: Two residents of Bucha receiving aid from Mr Masanovits in late March 2022 during Russian occupation. Pictured right: A Ukrainian woman receiving a cooked meal 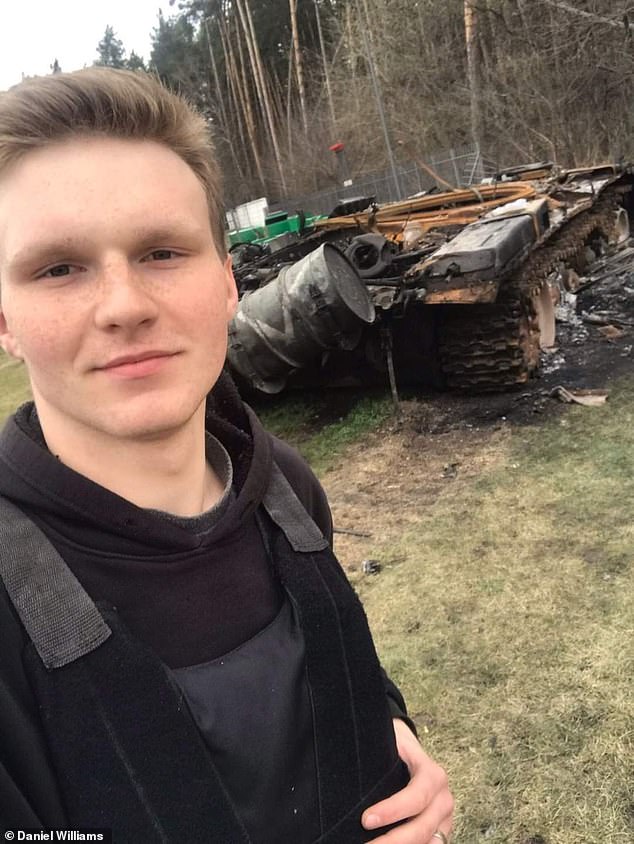 Arseniy Masanovits, 19, posing with the wreckage of a Russian tank during an aid delivery in Irpin – a city west of Kyiv – in early April

Mr Williams said he wanted to make a ‘direct impact’ so he sent money directly to Ukrainian teenager Arseniy Masanovits, 19, who had worked for him in Kyiv.

He used the donations, joining with local caterers, to work Kyiv’s abandoned restaurants to cook thousands of packaged meals a week.

Mr Masanovits then delivered the meals to stranded residents in the occupied and besieged cities north of Kyiv such as Irpin and Bucha.

They have provided at least 400,000 meals to those most in need in Ukraine, according to Mr Williams.

Musicians in Ryde on the Isle of Wight organised busking and concert events to raise money for the cause.

Posts were then seen by Lauren Fox, the partner of Watford FC and England football legend Luther Blissett – who was awarded an OBE this June.

Mr Blissett then organised further fundraising efforts in Watford and beyond. 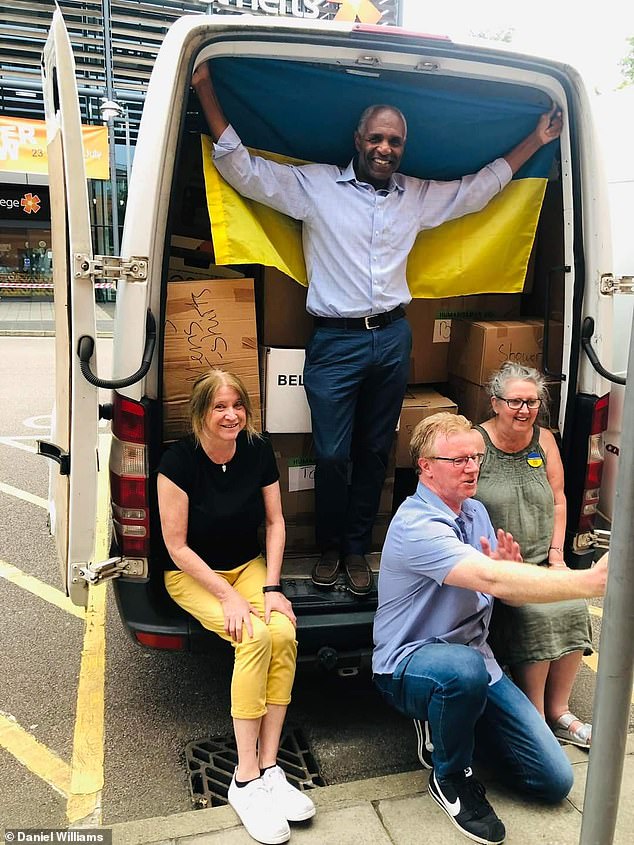 Watford FC and England footballing legend Luther Blisset OBE and his team from Watford with Daniel Williams, loading a Mercedes Sprinter full of aid in June that went to Ukraine Border Guards on the front lines in Kharkiv 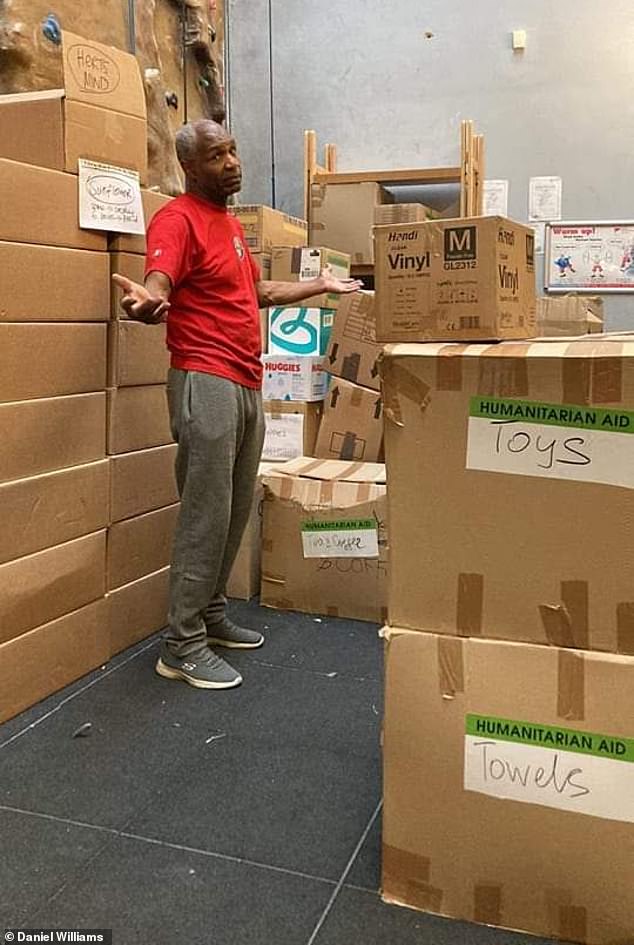 Luther Blisset surveying a sports hall full of aid collected in Watford, Hertfordshire after he got involved with the campaign 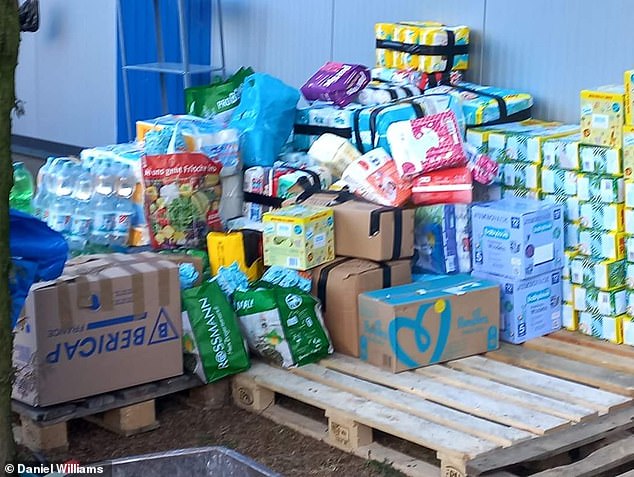 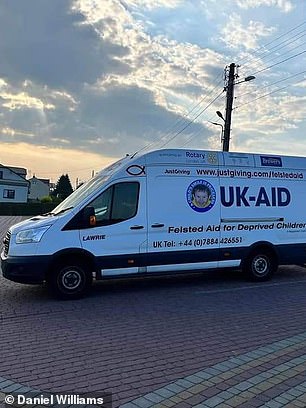 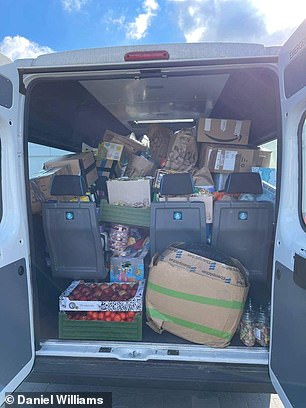 The cause struck gold back on the Isle of Wight when members of the exclusive Royal Victoria Yacht Club arranged a dinner aiming to raise £1,000 – a figure which Mr Williams says was ‘smashed’.

All this fundraising, plus more from Rev. Moy’s church in Chiswick meant the group could buy an ambulance and contribute towards two others.

This week, the ambulances were accompanied by three more an loads of aid and were driven to Ukraine this week.

They sent toys to an orphanage for survivors near Chernobyl and medical aid and clothing to the front lines of the Ukrainian army.

This mission was coordinated by Vadym Ivchenko, the deputy leader of one of the country’s main political parties, All-Ukrainian Union ‘Fatherland’, whom Mr Williams had become friends with while living in Kyiv. 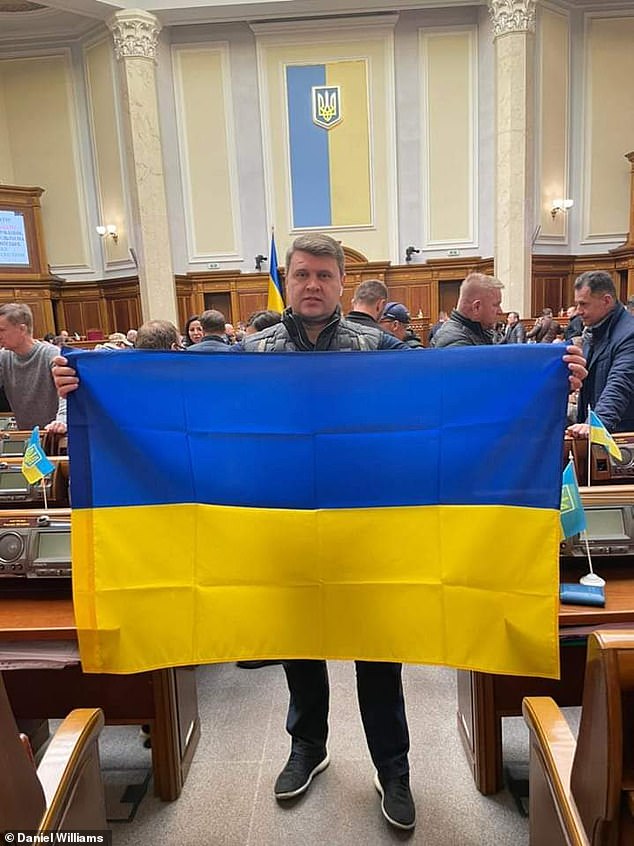 Vadym Ivchenko, deputy leader of political party All-Ukrainian Union ‘Fatherland’, posing with the Ukrainian flag inside the parliament before a speech about the efforts of the group started by Daniel Williams and Rev. Richard Moy

Harley Whitehead, 32, from Blackburn, was put in Russian targets during his previous aid missions to Ukraine, according to Mr Williams who described him as a ‘man mountain’.

He was recently convicted of drunk-driving in his absence while he was on an aid mission in May, the Lancashire Telegraph reports.

His lawyer Richard Prew told the court he had not intended to drive that night but was fleeing from people who ‘had a grudge against him’.

The two other volunteer drivers are Richard Lockwood, 57, from Essex, who recently recovered from a severe cancer diagnosis and Alyson Davies, a government worker and charity volunteer from Plymouth. 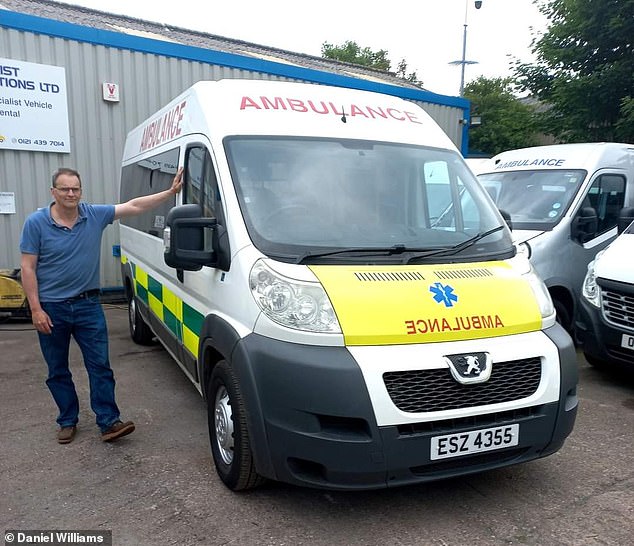 Volunteer driver Richard Lockwood,57, from Essex with an ambulance bound for Ukraine. He had recently recovered from a cancer diagnosis before heading to eastern Europe this week 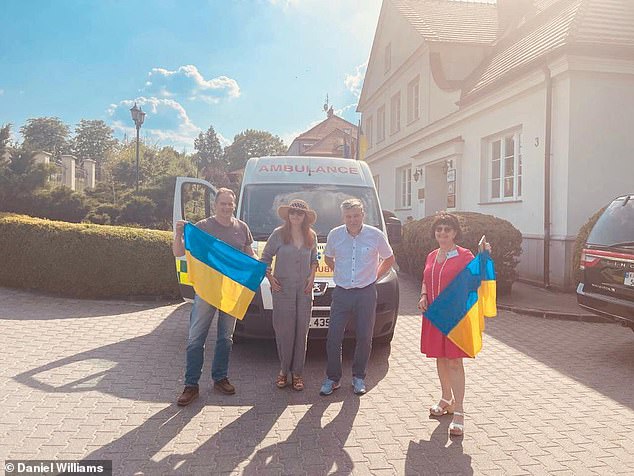 Richard Lockwood hands over the keys to an ambulance driven from Birmingham to Chelm, Poland to go on in to Ukraine and the front lines, ambulance funded by SOMA UK and Royal Victoria Yacht Club and a musical and poetry event on the Isle of Wight 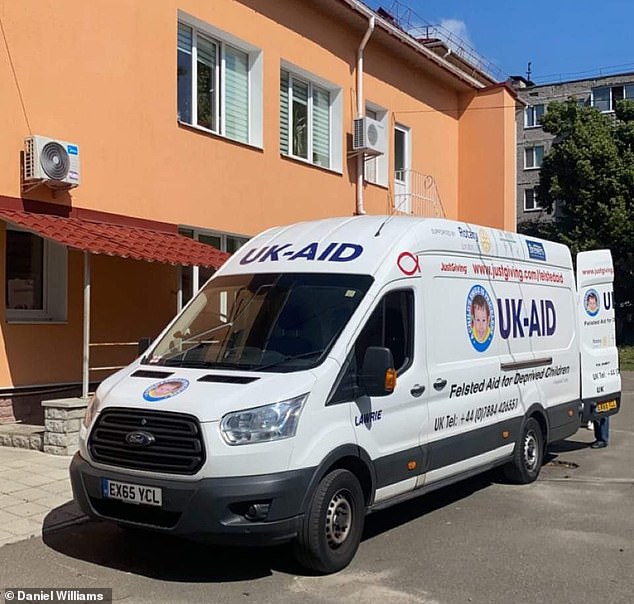 The UK Aid van parked outside an orphanage in Chernihiv, in northern Ukraine, where volunteers delivered a full van-load of aid in June 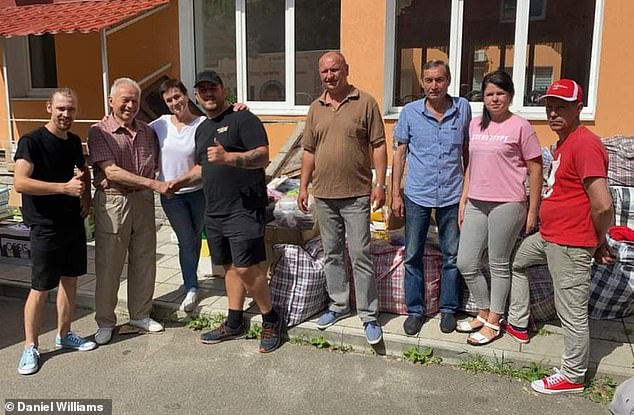 Volunteer Driver Harley Whitehead (fourth from left) and his local guide Andrey at an orphanage four miles from the Russian border with an aid delivery – the area was hit by around 20 rockets within the past few days, Mr Williams has said

‘Somehow with no formal structure, network nor even a name for their group, this rag-tag bunch of Brits with their friends in Ukraine have, between them, delivered dozen of van loads of aid probably worth well north of £500,000,’ said Mr Williams.

He added they, ‘brought out 60 people (and four cats and a dog), dropped off dozens of Ukrainians as well as coordinated housing for dozens more, and provided at least 400,000 meals for the neediest in Ukraine.

‘There is nothing that would normally link these people in life except one thing – they and dozens others who helped achieve what has been achieved came together because they had in common a desire to help and huge hearts and capacity to persevere.’

Mr Williams concluded: ‘War brings out the worst in some, but in my friends, old and new, who stepped up in unimaginable ways since that day I boarded that train in Lviv, they are all heroes.

‘The best of British, the best of humanity. Nobody has taken a penny piece in salary or expenses and every ounce of aid has got where it was intended.’