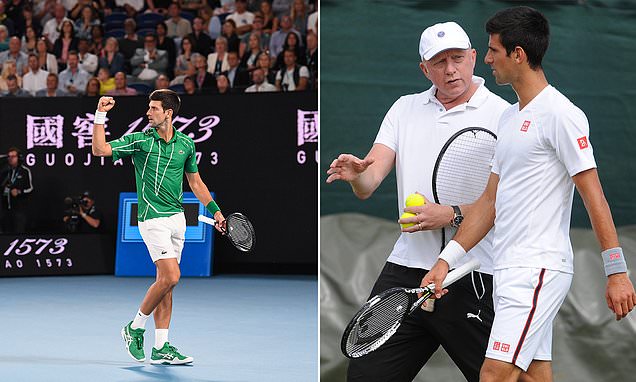 Boris Becker has warned Novak Djokovic he risks the wrath of the Australian Open crowd if his quest for a record 21st Grand Slam title continues in Melbourne next week.

Djokovic’s participation is still in limbo as he awaits a verdict from Australian immigration minister Alex Hawke, who is considering whether to cancel his visa despite the Serbian’s court victory on Monday.

While Serbian fans celebrated outside the courthouse on Monday, many Australians, who have endured months of hard lockdowns, remain angry at the current decision to allow the unvaccinated Djokovic to enter the country.

Becker, who coached Djokovic for three seasons from 2014 to 2016, told the BBC: ‘I’m sure there will be a couple of boos and whistles, but he’s used to that.

‘He was always a street-fighter who had to fight the odds and win over the crowd, and it was fascinating in last year’s US Open final when they finally embraced him.

‘The crowd will be difficult with him but with each match he starts he will win the crowd and they will embrace him again. But he is going to have a difficult first week.’ 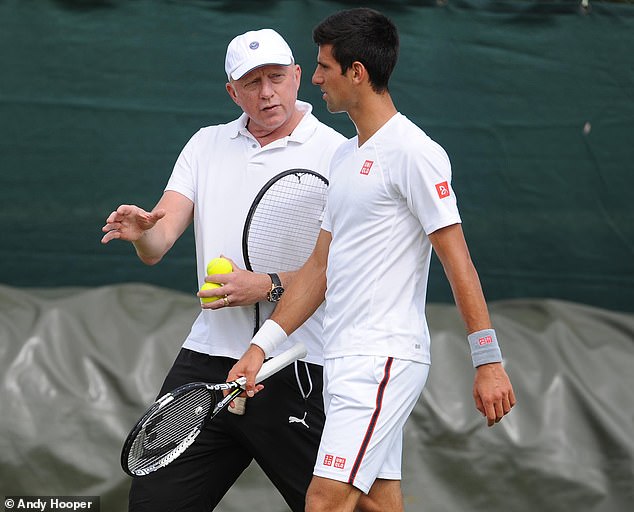 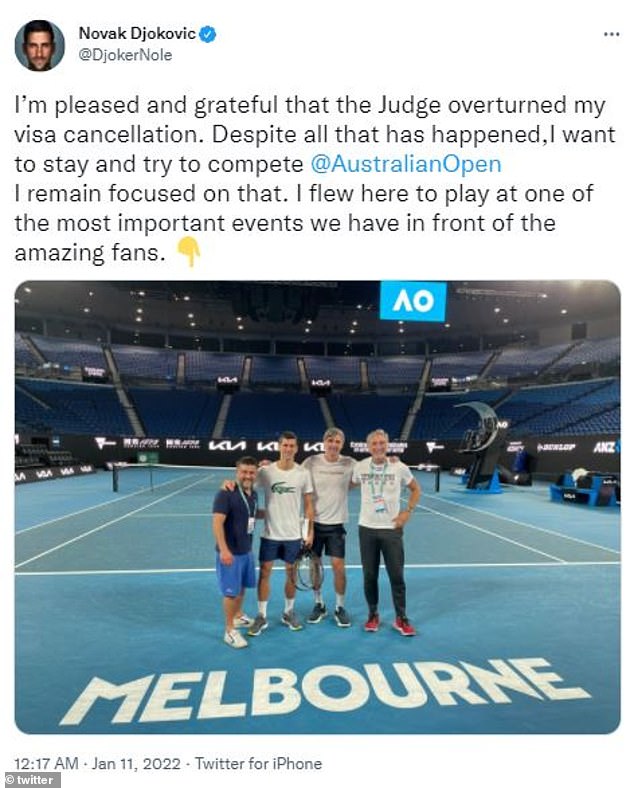 While expressing his full support for Djokovic’s stance, Becker admitted he was concerned at the prospect of similar problems in the future, and reiterated his belief that the world No 1 should accept a vaccine.

‘I’m sure the French Open and Wimbledon will be watching the Melbourne saga, and I’m sure they will have strict rules on who can play and who cannot play,’ Becker added.

‘It’s everybody’s choice but life is more difficult if you don’t want to be vaccinated. Personally I’d advise him to be vaccinated eventually because life would be easier for him, but ultimately it’s his choice and we have to respect that.’ 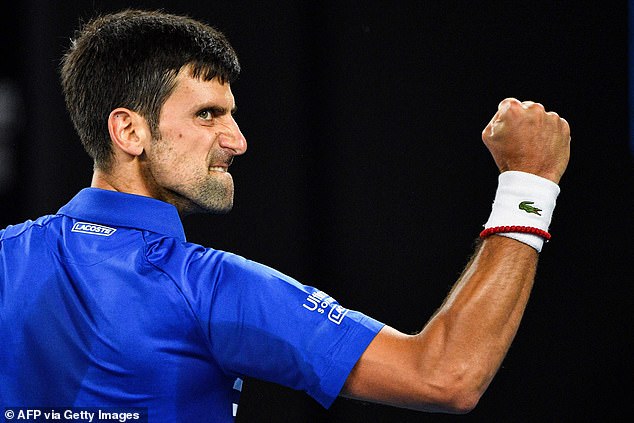 The Australian Border Force is investigating whether the Australian Open champion made a false declaration claiming he had not travelled in the 14 days leading up to his arrival in Melbourne.

According to his sworn affidavit, Djokovic departed Spain on January 4 and had a stopover in Dubai before landing in Melbourne late on the night of January 5.

The timings mean Djokovic would have had to be in Spain from 11.30pm on December 22 Australian Eastern Daylight Time, or 1.30pm Spanish time to comply with the rules not to travel within two weeks of arriving in Australia, the Herald Sun reported.

The document was released by the Federal Circuit Court of Australia on Monday. In an affidavit Djokovic submitted to the court, he said he ‘authorised’ his agent to submit the travel declaration form. 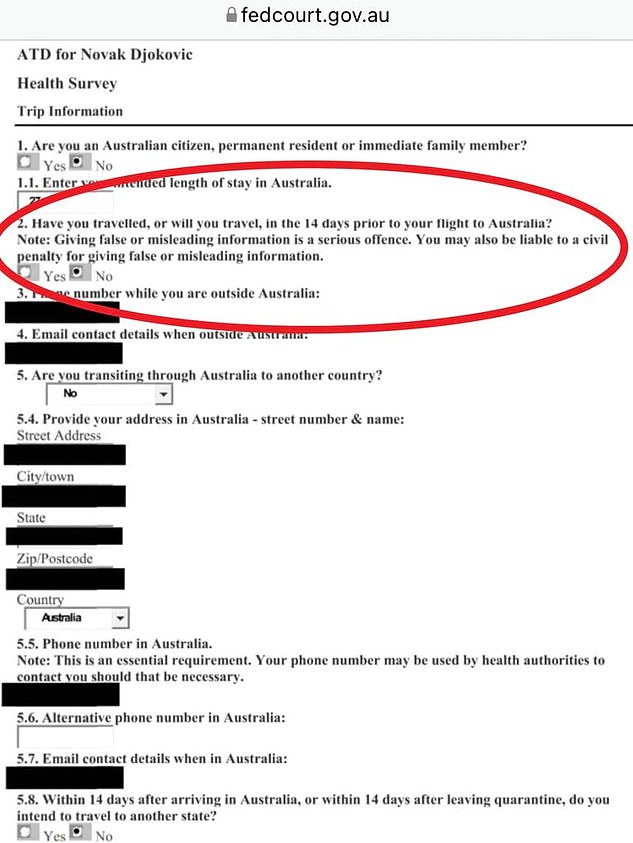 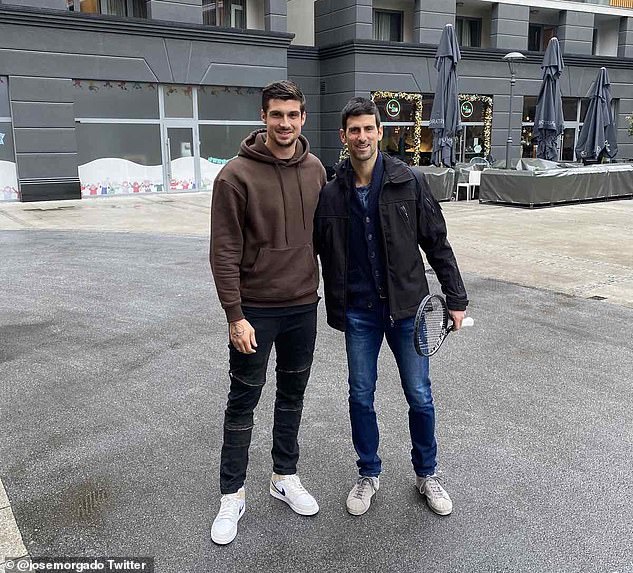 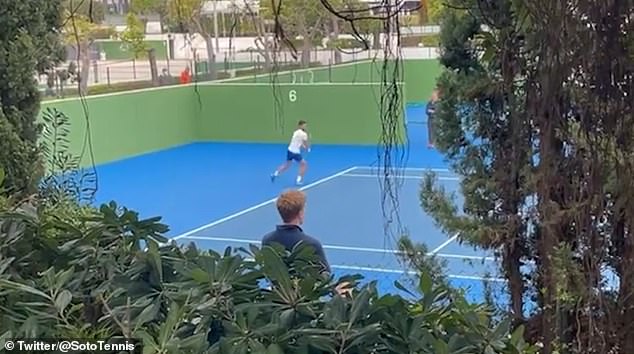 A number of fellow players have expressed concerns over Djokovic’s potential exemption, although Rafael Nadal offered belated support for the decision on Monday, having previously intimated it was wrong for his great rival to seek to enter Australia.

Wimbledon quarter-finalist Marton Fucsovics provided a glimpse of the mood in the locker room by saying he does not think the Serbian had the right to play in the tournament.

Speaking to the Hungarian outlet M4Sport, Fucsovics said: ‘People’s health is paramount, and there are rules that were outlined months ago, namely that everyone should vaccinate themselves – and Djokovic didn’t.

‘From this point of view, I don’t think he would have the right to be here.’ 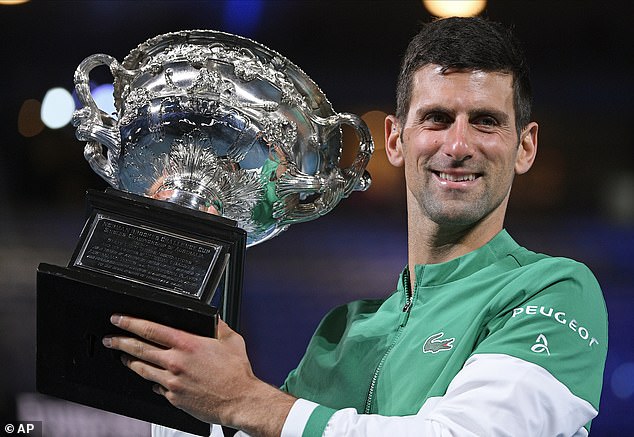 
The Hungarian world No 38, who lost to Djokovic in last year’s Wimbledon quarter-finals and in the Paris Masters in November, also said he was not alone in thinking it unfair that Djokovic could play in the gram slam event despite not being vaccinated.

The 29-year-old said news of the world No 1’s exemption had received a negative reception among many tennis players.

Djokovic has returned to training in Melbourne while Minister Hawke considers whether to invoke extraordinary powers to send the Serbian home.

The star still has questions to answer, such as why he was pictured at a series of public engagements in the days following his second positive coronavirus test on December 16.

An attempt to broach the subject during a news conference staged by the Djokovic family in Belgrade on Monday was ignored. 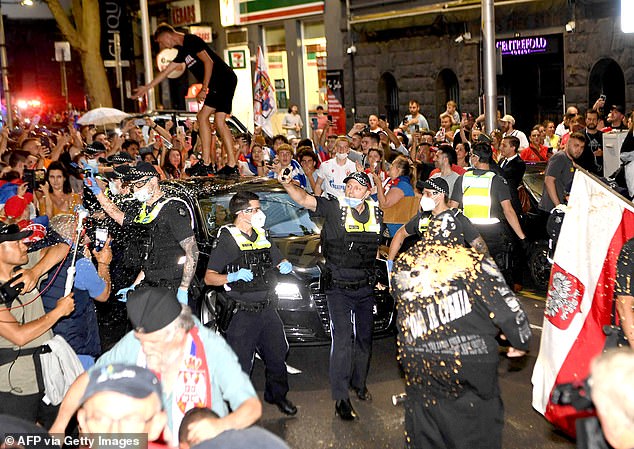 ‘The PM had a constructive call with PM Brnabic this morning on Novak Djokovic,’ a statement from the Australian Prime Minister’s Office read.

‘The PM explained our non-discriminatory border policy and its role in protecting Australia during the Covid-19 pandemic.

‘They both agreed to stay in contact on the issue, and to further strengthening the bilateral relationship.’

Former Australia cricketer Shane Warne branded his country’s handling of the affair as a ‘shambles’ but insisted it was their right to refuse entry. 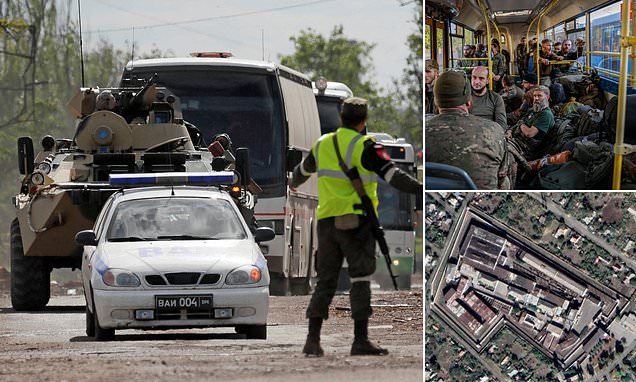 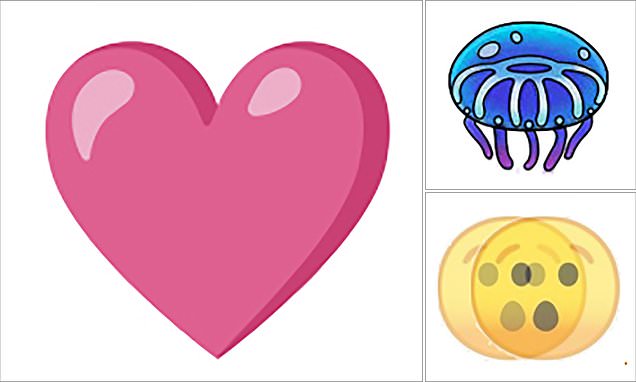 Pink heart and jellyfish among new emoji being considered for release

From a pink heart to a jellyfish: New emoji being considered for the next release are REVEALED – as Unicode says any new flags are off the tableUnicode has revealed the list of new emoji is is condering for Emoji 15.... 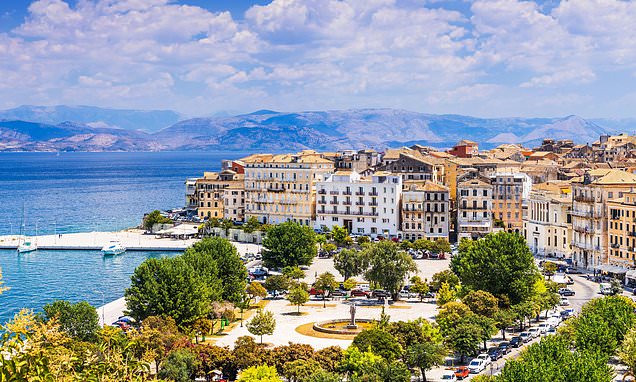 British woman 'reports being raped in Corfu' after arriving at island police station 'in a bad condition' as 40-year-old man is arrestedBREAKING: More to follow  A man has been arrested on suspicion of raping a Briti... 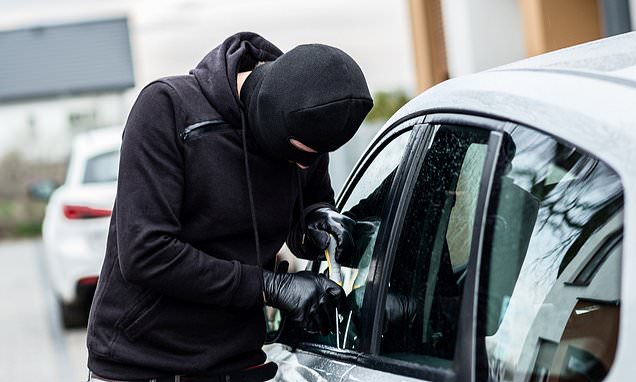