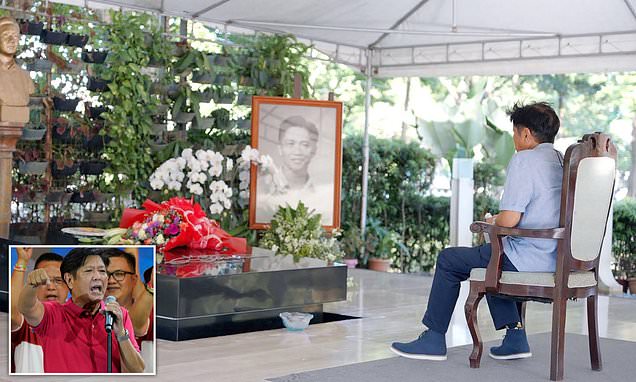 Ferdinand ‘Bongbong’ Marcos Jr. broke down as he visited the grave of his dictator father yesterday after winning the Philippines election ‘by a landslide’.

The namesake son of the ousted ruler won more than 31million votes in an unofficial count from Monday’s polls in what’s projected to be one of the strongest mandates for a Philippine president in decades.

Ferdinand Sr, the husband of Imelda Marcos, was deposed by a revolt in 1986 and the family chased into exile ending a 21-year reign over the country.

Bongbong has steadfastly defended his father’s legacy and refused to apologise for the massive human rights violations and plunder under his rule.

He visited his father’s grave at the national heroes’ cemetery on Tuesday, laying flowers and, at one point, appearing overcome with emotions. 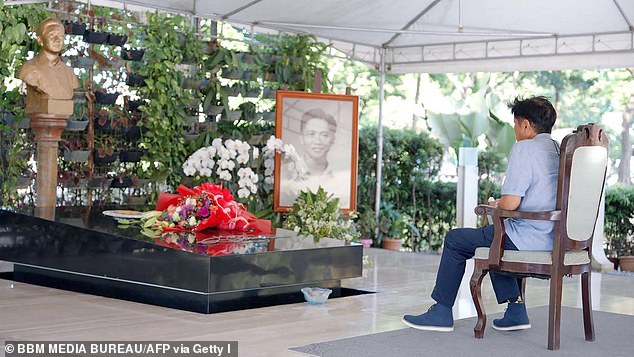 Ferdinand ‘Bongbong’ Marcos Jr. broke down as he visited the grave of his dictator father yesterday after winning the Philippines election ‘by a landslide’ 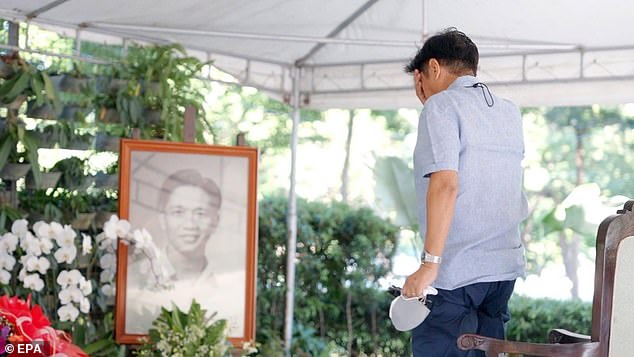 He visited his father’s grave at the national heroes’ cemetery on Tuesday, laying flowers and, at one point, appearing overcome with emotions 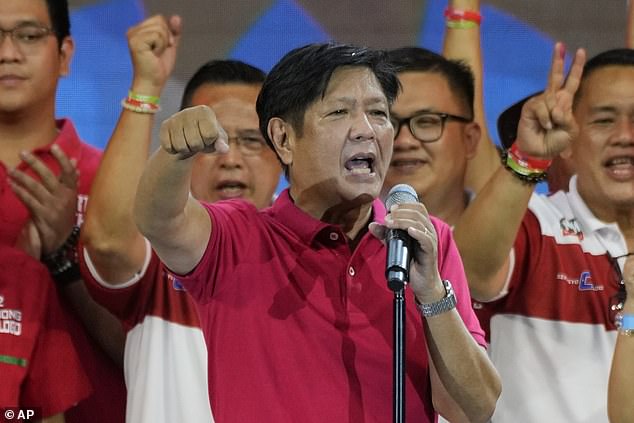 Imelda Marcos, the 92-year-old wife of the late dictator, turned out to vote for Bongbong.

The former first lady, famed for her opulent lifestyle including a collection of 3,000 pairs of shoes, donned a matching red outfit with a rosary and a Chanel pin as she was lifted from a white van to cast her ballot.

Marcos junior’s campaign was marked by a relentless online whitewashing of his family’s brutal and corrupt regime, as well as an embrace of current authoritarian president Rodrigo Duterte, who retains widespread popular support.

Rights activists, Catholic leaders and political analysts had all warned Marcos Jr could rule with an even heavier fist if he wins by a large margin.

Marcos was able to tap into widespread anger at a string of post-dictatorship governments, which many Filipinos believe had failed to materially improve their lives. 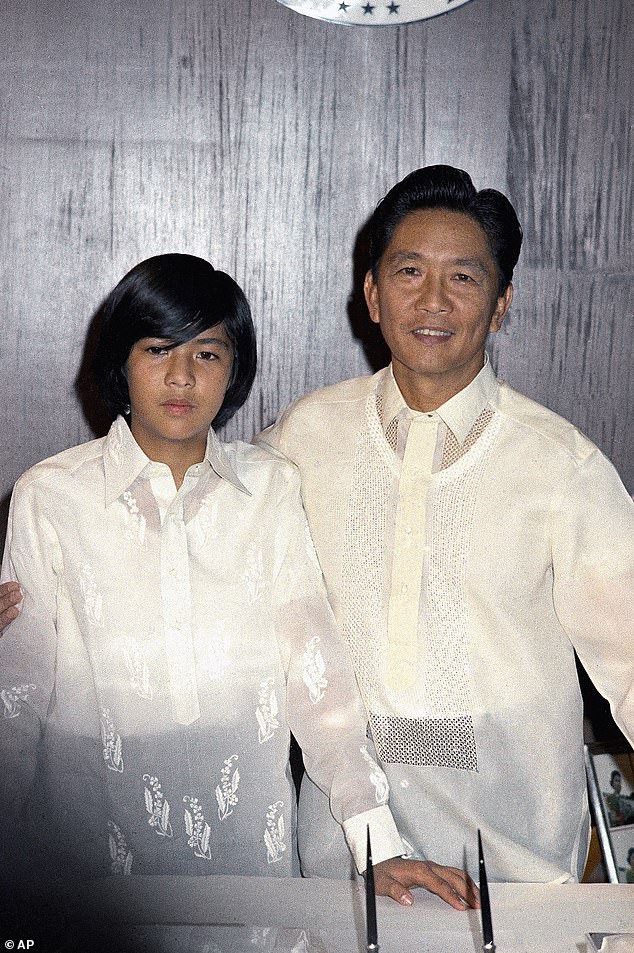 Crucially, he also secured the support of several of the country’s powerful political dynasties, who through networks of patronage can be called on to deliver blocs of votes.

His vice-presidential running mate, Sara Duterte, appeared to have also won by a landslide.

The separately elected president and vice president will take office on June 30 after the results are confirmed by Congress.

With a single, six-year term, they are poised to lead a Southeast Asian nation in a dire need of economic recovery following two years of Covid-19 outbreaks and lockdowns.

They’ll also inherit huge expectations for a way out of crushing poverty, gaping inequalities, ending Muslim and communist insurgencies and political divisions, which were only inflamed by the turbulent presidencies of their fathers. 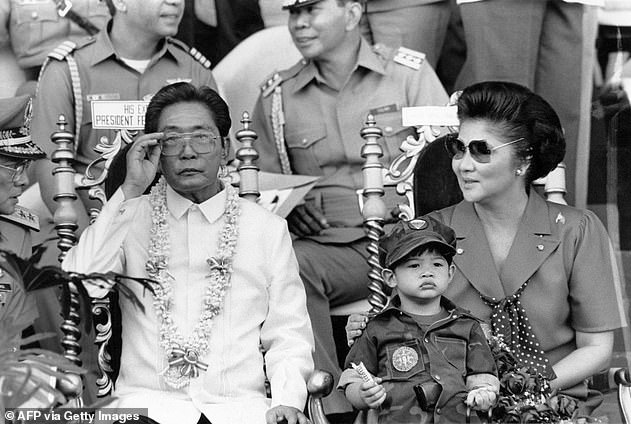 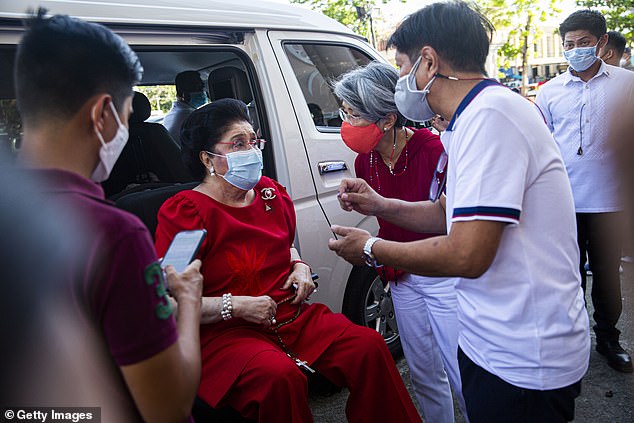 ‘As a boxer and an athlete, I know how to accept defeat,’ Pacquiao said in a video message. ‘But I hope that even if I lost in this fight, my fellow Filipinos who are wallowing in poverty were a winner too.’

The United States, a longtime treaty ally of the Philippines, was among the first foreign governments to issue a comment following the elections.

It expressed willingness to work with the next Filipino president after an official proclamation but stressed the relationship should be grounded on respect for human rights and the rule of law.

‘We look forward to renewing our special partnership and to working with the next administration on key human rights and regional priorities,’ U.S. State Department spokesman Ned Price said. 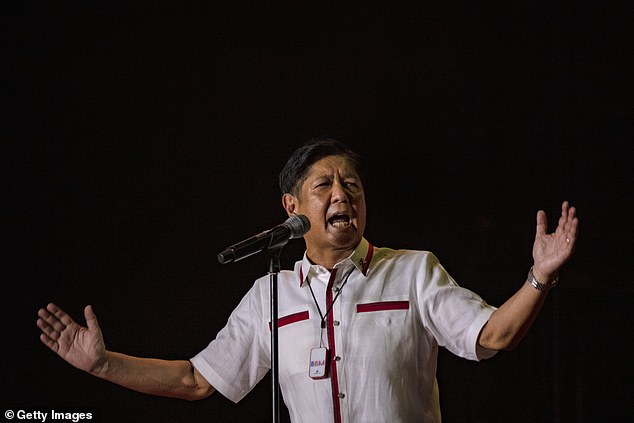 He cited Washington’s long alliance with Manila ‘that shares democratic values and interests,’ and added that the U.S. government would continue ‘to promote respect for human rights and the rule of law which is fundamental to U.S. relations with the Philippines and in other bilateral contexts.’

Asked if the U.S. has any concern with the apparent victory of Marcos Jr., Price sidestepped the question but said the elections and subsequent vote count followed international standards without any major incident.

Bongbong and Sarah Duterte, the daughter of outgoing populist leader Rodrigo Duterte, campaigned on a platform of national unity without saying how they would heal the wounds that have festered since their fathers’ presidencies.

The 64-year-old former provincial governor, congressman and senator has kept mom on key political, economic and foreign policy issues, including how he would address calls for the prosecution of President Duterte, who oversaw a bloody anti-drugs campaign that alarmed the international community and sparked an investigation by the International Criminal Court. 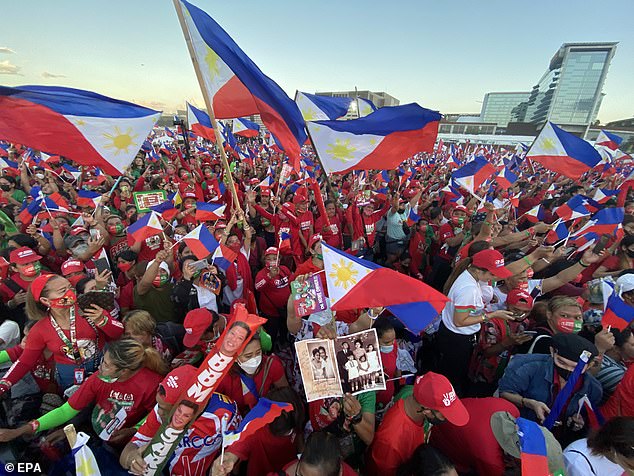 More hard-line left-wing groups and survivors of the Marcos dictatorship rejected Marcos Jr. and Sara Duterte outright, accusing them of whitewashing their fathers’ legacies on the campaign trail and in social media propaganda.

‘Our generation has shown that even the most ruthless tyrant can be defeated by the people’s collective action,’ said SELDA, a group of ex-political detainees and human rights victims in the martial-law era under the late dictator. ‘Now is the time to harness that power again – the power to change the course of history and reject this nefarious pair of traditional politicians.’

LIFE OF LUXURY: THE DICTATOR’S WIFE WITH 3,000 PAIRS OF SHOES

She was famous for amassing a prized shoe collection that most women would kill for.

Imelda Marcos, the wife of late dictator Ferdinand Marcos, is believed to have owned more than 3,000 pairs before she and her husband were driven out of the Philippines.

The Marcoses fled the country at the climax of the army-backed ‘people power’ revolt in 1986 and left behind staggering amounts of personal belongings, clothes and art objects at the palace, including the former first lady’s shoes.

The massive shoe collection, said to be in the region of 3,000 pairs, including top U.S. and European brands, astounded the world and became a symbol of excess in the Southeast Asian nation, where many still walked barefoot out of abject poverty.

After the 1986 revolt, Aquino had Imelda Marcos’ shoes displayed at the presidential palace as a symbol of the former first lady’s lavish lifestyle. The shoes were then removed from public view and stored in the palace basement when Aquino stepped down in 1992.

Imelda Marcos claimed many of the shoes were gifts from Filipino shoemakers in suburban Marikina city, the country’s shoemaking capital, for endorsing their products.

Marikina officials borrowed 800 pairs of her shoes in 2001 for a shoe museum, which has become a tourist spot. Massive flooding, however, damaged dozens of pairs of Marcos’ shoes in Marikina in 2009.

In 2012, it was reported that the shoes still look remarkably new due to meticulous museum care, which includes displaying them in airtight and dust-free glass cabinets in an air-conditioned gallery, away from direct sunlight.

The shoe collection was said to draw a daily crowd of 50 to 100 Philippine and foreign tourists, who almost always left in awe, museum manager Jane Ballesteros said at the time.

Mrs Marcos, was accused but never convicted of stealing state billions to support a lavish lifestyle during Ferdinand’s 20 year rule.

Ferdinand Marcos died in exile in 1989. Among his own assets were paintings by such masters as Monet, Picasso and Van Gogh. 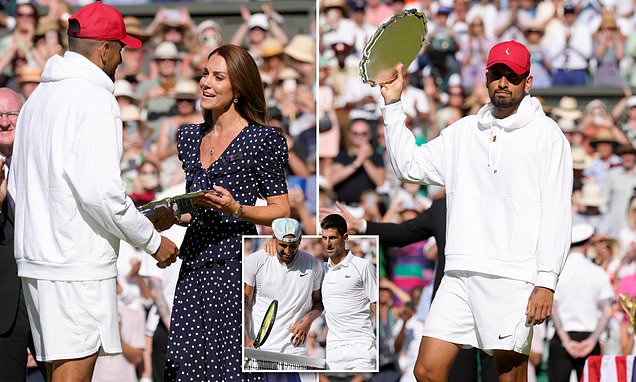 Boris Johnson resigns and will address the nation TODAY: PM finally quits after his Chancellor of two days plunges the knife following a flood of ministers quitting - but wants to stay in No10 until OCTOBERBoris John... 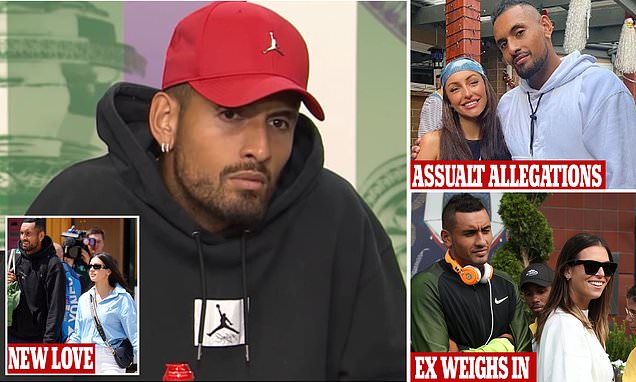 Nick Kyrgios reveals his 'suicidal thoughts' as he breaks silence on allegations he assaulted his ex - and another former lover blasts 'disappointing' question she was asked about their relationshipNick Kyrgios reach...