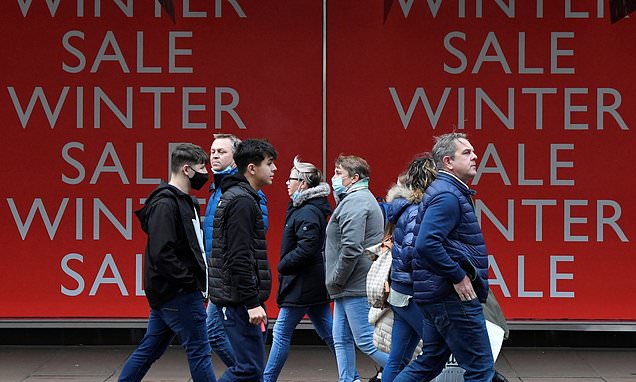 Boxing Day sales continue to SLUMP: Despite lack of tighter Covid restrictions in England, footfall in London is down 56% compared to 2019 as rain, wind and cancelled train services keep bargain shoppers away

Post-Christmas sales have continued to slump will shoppers’ footfall far below pre-pandemic levels – despite Boris Johnson refusing to enforce any new Covid restrictions before the New Year.

The number of bargain hunters heading to stores this lunchtime was ‘substantially below’ the same period in 2019, well before Covid had swept through the country.

Footfall in a wet and cold central London today was 56 per cent down on December 28, a Saturday, in 2019.

Market towns fared equally poorly, with shopper numbers 51 per cent below the same time two years. The South East saw the biggest resurgence in shoppers, having fallen by 27.9 per cent.

Analysts have suggested the slump is down to a continuing fears about the high rate of Covid infections, with England reaching a record high of 113,628 new cases on Christmas Day and 1,281 people being admitted to hospital.

Businesses and hospitality venues were however buoyed yesterday when Prime Minister Boris Johnson said he would not put any more curbs on shoppers or partygoers in December. 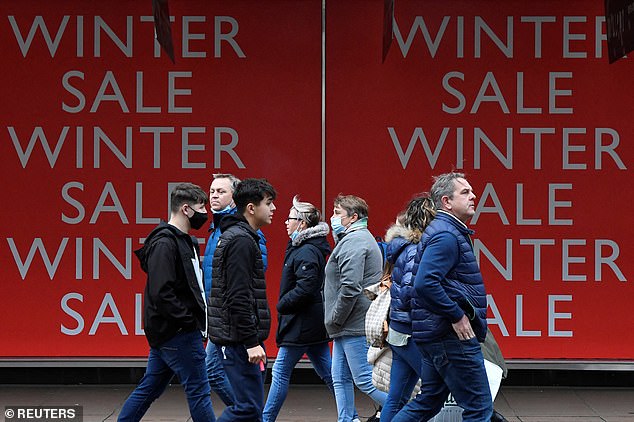 Post-Christmas sales have continued to slump will shoppers’ footfall far below pre-pandemic levels. Footfall in a wet and cold central London today was 56 per cent down on December 28, a Saturday, in 2019. Pictured: Oxford Street in London 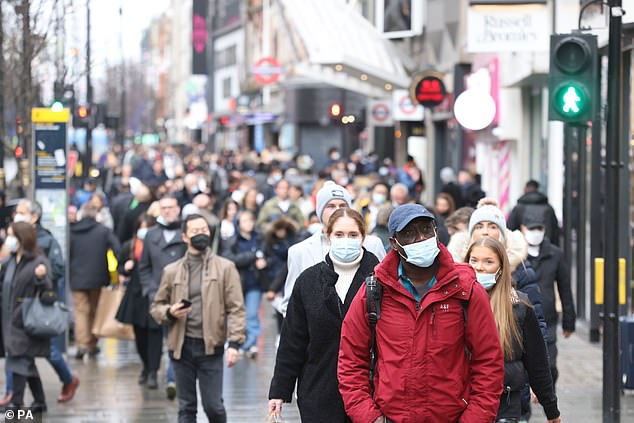 The number of bargain hunters heading to stores this lunchtime was ‘substantially below’ the same period in 2019, well before Covid had swept through the country

Wet and windy weather across most of the England and Wales has also not helped to inspire shoppers who could otherwise buy online.

The Met Office warned of cloud, strong winds and heavy rain sweeping across the UK over the next three days, although the Bank holiday weekend could bring ‘exceptionally mild’ conditions.

The figures are however, as expected, significantly higher than the same period in 2020, when the country was under much tighter restrictions.

Footfall on UK high streets is, for instance, up 57.2 per cent compared to the December 28 in 2020 – a period when millions moved online for the Boxing Day sale shopping.

Retail parks across the UK are also performing much better than the high street, with just an 11.3 per cent reduction in footfall compared to 2019. 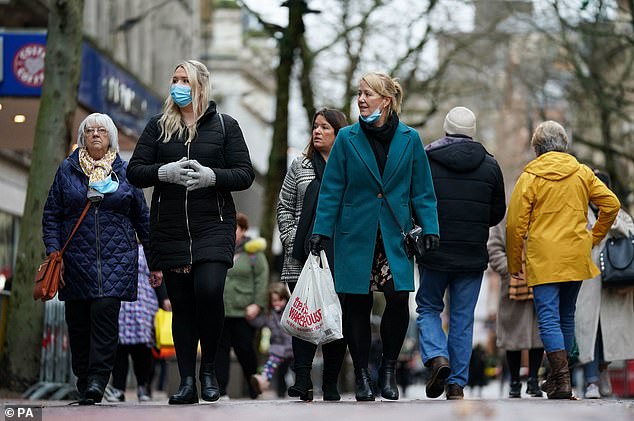 Analysts have suggested the slump is down to a continuing fears about the high rate of Covid infections, with England reaching a record high of 113,628 new cases on Christmas Day and 1,281 people being admitted to hospital. Pictured: Shoppers in Birmingham city centre 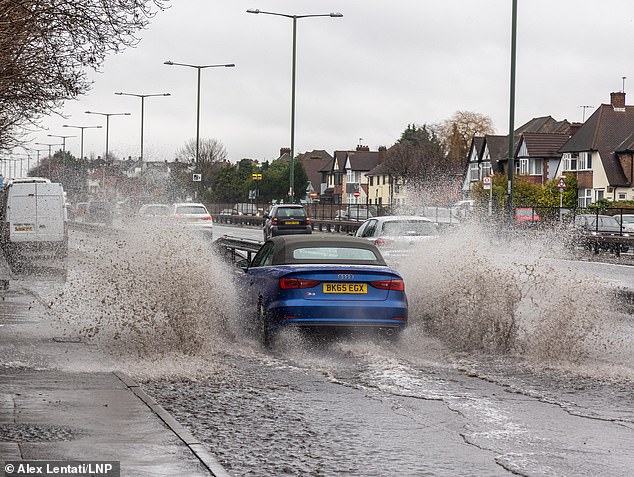 Wet and windy weather across most of the England and Wales has also not helped to inspire shoppers who could otherwise buy online. Pictured: Flooding on the A3 in south west London 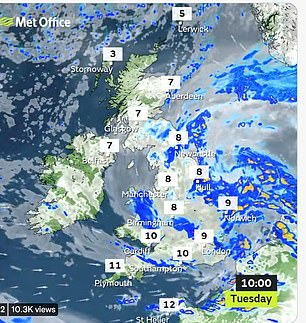 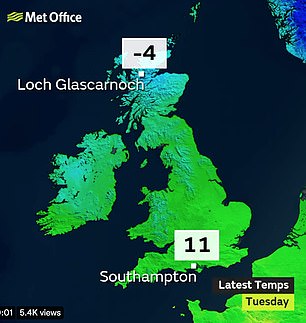 Today will see many areas hit with rain or showers before sunny spells begin to arrive from the west. Temperatures could reach 11C in Southampton and -4C in Loch Glascarnoch 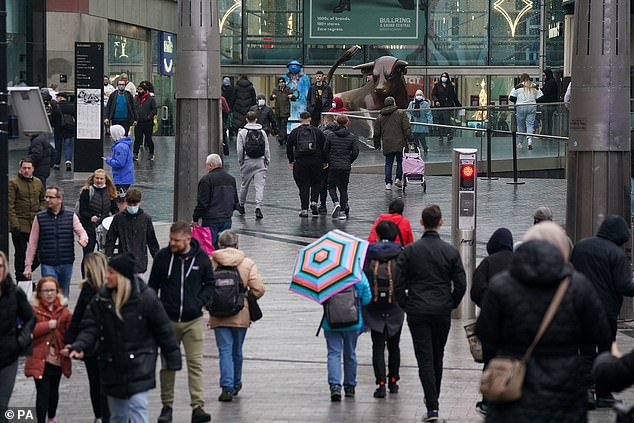 The figures are however, as expected, significantly higher than the same period in 2020, when the country was under much tighter restrictions. Pictured: Birmingham

The driving force behind the trend towards out of town stores is believed to be down to easy access for cars to avoid public transport and shoppers avoiding large crowds.

The footfall data was collated by Springboard, a retail intelligence and shopper analytics provider, who reported that ‘overriding reason’ for the lower footfall was ‘consumers’ ongoing nervousness about the Covid infection rate’.

Diane Wehrle, the company’s Insights Director said: ‘Footfall up to 12pm today remained at a similar level vs 2019 to that on both Boxing Day and 27th December; up to 12pm today footfall was -34.8% below the 2019 level across all retail destinations.

‘Retail parks attracted proportionately more shoppers than either high streets or shopping centres over the last two day, most likely due to many shoppers replenishing their food and groceries post Boxing Day, as the majority of retail parks have food stores. 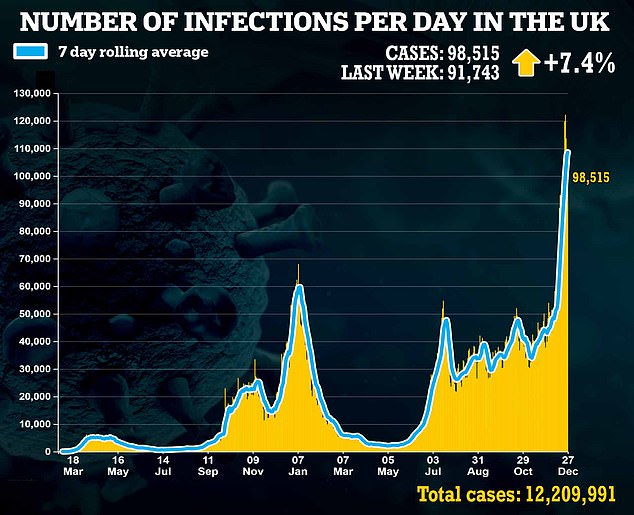 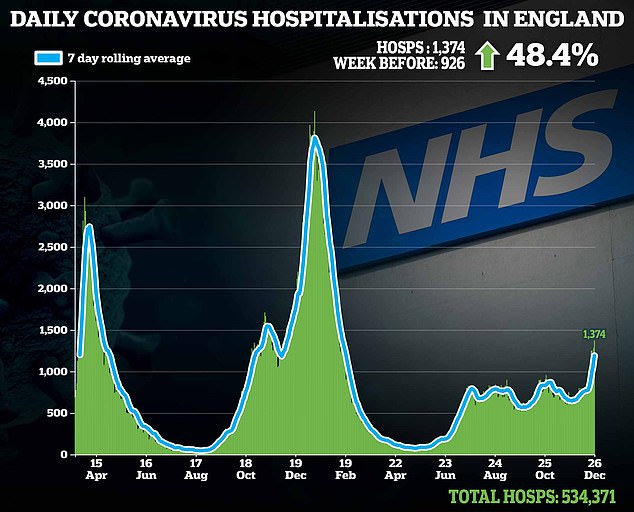 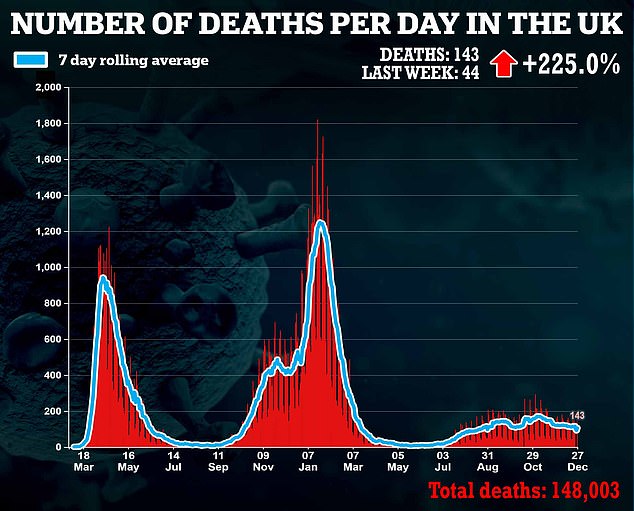 ‘Footfall up to 12pm today was substantially below the 2019 level in all types of town centre, with the greatest proportionate drop occurring in Central London (-56%) which in part is likely to be a result of cancellations of trains restricting shoppers’ ability to get into the capital.

‘Despite more stringent restrictions having come into force in the devolved nations, footfall up to 12pm today was not substantially out of kilter with England.

‘Whilst shoppers are clearly nervous about Omicron, the glimmer of hope for retailers is that footfall up to 12pm today was +49.8% higher than in 2020, and +92% higher on Boxing Day, albeit that some of this will have been due to Boxing Day occurring on a Sunday in 2020 versus a Monday this year.’

The department store chain told about 120 workers in its shops and Waitrose supermarkets on December 23 that they would not be needed anymore because sales had been lower than expected.

The company took on 4,000 temporary workers for the festive period.

The social media storm was sparked on Twitter after a mother said her son had lost out on a £500 bonus he would have got for working until the end of the year.

A spokesman for John Lewis said they were ‘very sorry’ to hear about the incident.

They added that temporary workers were recruited via a third party agency and that exact contract lengths were ‘deliberately unspecified’ due to the uncertainty of festive work requirements.

The slump is not though to be solely down to fears about Covid but also issues for shoppers using public transport to get into central London and other big cities.

Strikes orchestrated by the RMT union for instance are likely to play havoc with East Midlands Railway services, affected until January 2.

National Rail has insisted that 95 per cent of the network will remain open over the festive period despite the wave of disruptions.

It added that the 370 engineering projects it is carrying out over Christmas were planned ‘months, and in some cases years, in advance’.

Staff absence levels fuelled by Covid hit 9 per cent in the run-up to Christmas.

CrossCountry, which operates routes between Scotland and England, was hit by strikes on Christmas Eve with further industrial action expected on New Year’s Eve.

Disruption on its network due to planned engineering works will also see trains unable to call at Bristol Parkway between December 27 and December 31.

Some Great Western Railway services to and from Bristol Temple Meads will also be affected.

In the North, Leeds will have a reduced service between December 27 and January 3, including a severely restricted service on January 2.

London can also expect travel chaos due to planned closures on the Tube network, with the Piccadilly, Jubilee, Metropolitan and City lines all affected. 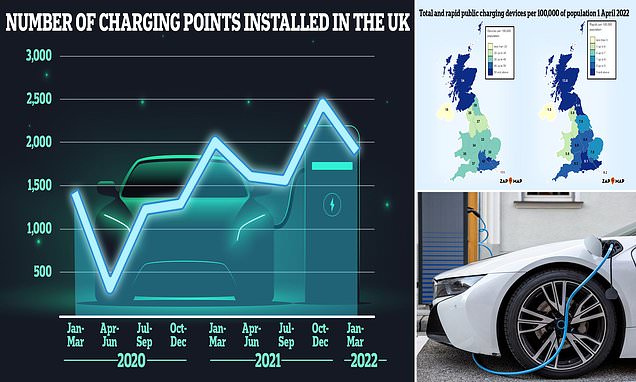 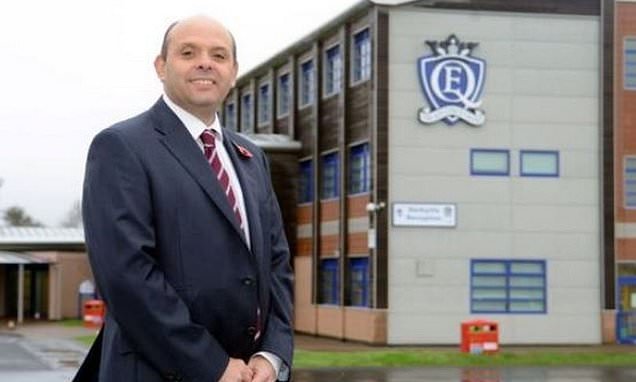 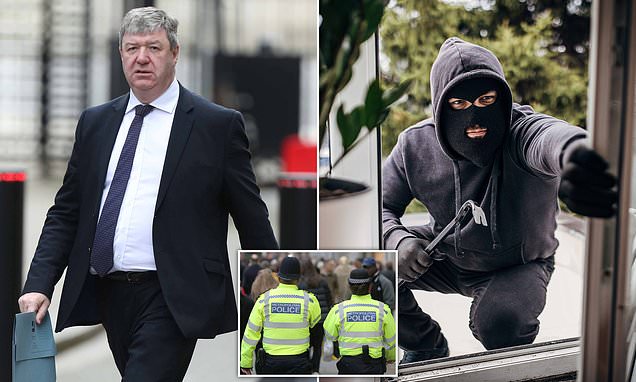 Police failed to solve 500 burglaries a DAY last year as forces are branded a 'disgrace' for not treating break-ins as a priorityOut of 240,000 break-ins last year, some 190,000 were closed without a suspect Among th... 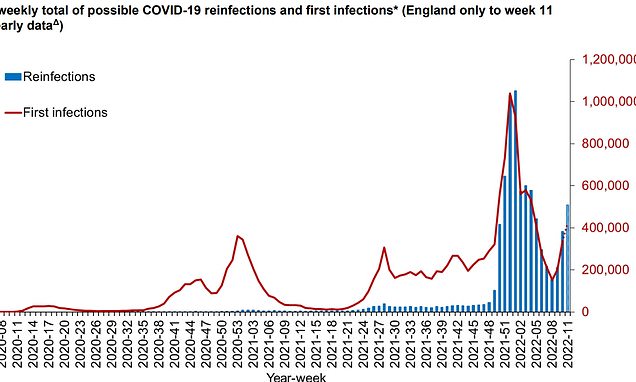