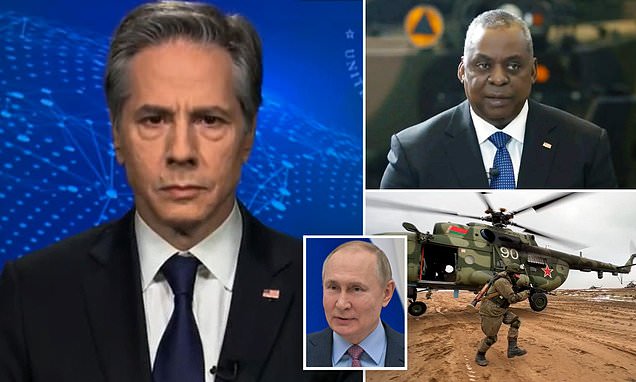 U.S. intelligence reveals Russian President Vladimir Putin has already given his troops orders to proceed with an invasion into Ukraine, according to a new CBS News report Sunday.

‘So not only are they moving up closer and closer to the border and to these attack positions, but the commanders on the ground are making specific plans for how they would maneuver in their sector of the battlefield,’ he added.

‘They’re doing everything that American commanders would do once they got the order to proceed.’

Martin’s revelation comes after President Joe Biden said Friday that he is very certain that Putin has already made up his mind that he will attack Ukraine based on D.C’s ‘significant intelligence capability.’

‘He’s assembled the kinds of things that you would need to conduct a successful invasion,’ Defense Secretary Lloyd Austin told ABC’s Martha Raddatz of Putin in an interview tapped in Ukraine.

When asked what the chances are that Putin is bluffing, Secretary of State Antony Blinken told CNN‘s State of the Union: ‘I think while there’s always a chance.’

‘Everything we’re seeing suggests that this is dead serious, that we are on the brink of an invasion,’ he continued.

Blinken, whose job is to pursue diplomatic paths and strengthen ties with foreign nations, plans to meet with Russian Foreign Minister Sergey Lavrov this week to try and prevent war – as long as Moscow has not already invaded Ukraine by that point.

‘It’s my responsibility to do everything I can to try diplomatically to prevent a war,’ Blinken told NBC’s Meet the Press on Sunday.

Blinken is hopeful that there is still a diplomatic path forward, despite President Joe Biden’s administration insisting the window for diplomacy is ‘narrowing’. 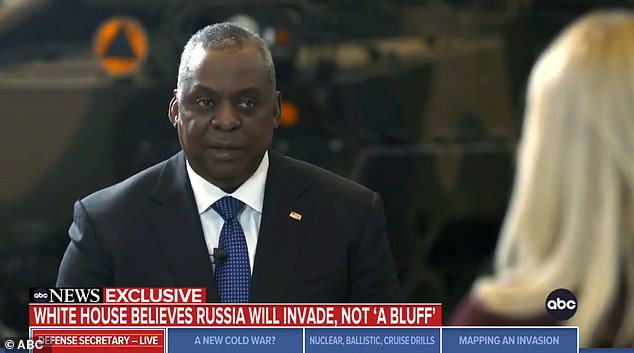 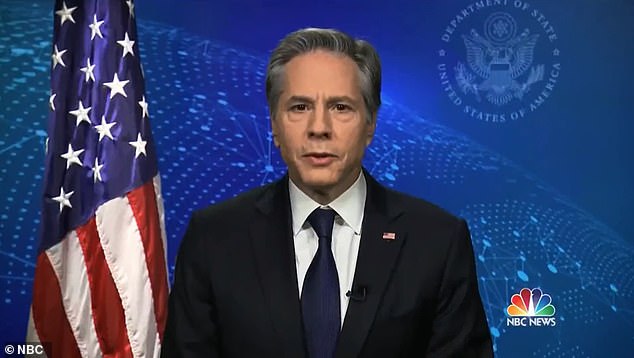 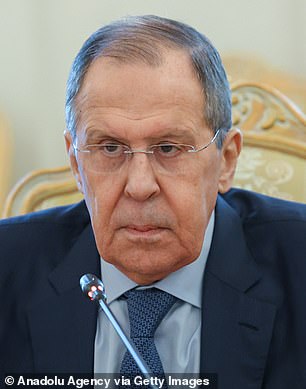 Blinken said if the meeting goes forward with Lavrov (pictured) it means there’s still time to divert war, but if it doesn’t that means war is already underway

‘I reached out to Foreign Minister Lavrov some days ago, suggested we meet this coming week in Europe to see if we can pursue conversations that would allow us to prevent a war and address the security concerns that we all have, the United States, Europe, and Russia, in that conversation,’ Blinken detailed. ‘He came back and said, ‘Yeah, let’s meet.’ And we responded and said, ‘The meeting’s on provided you don’t invade Ukraine in the meantime.’

‘Until the tanks are rolling, and the planes are in the air, we’re going to try everything we possibly can to get President Putin to reverse the decision we believe he’s made and to dissuade him,’ he said when asked about the decision for the U.S. to put off sanctions until invasion.

‘As soon as you trigger the sanctions, any deterrent effect they may have is gone.’

​​’If you pull the trigger on that deterrent, well, then it doesn’t exist anymore as a deterrent,’ he said. ‘He [Putin] has not conducted another invasion in Ukraine yet and we want – we still think there’s time to prevent that.’

Austin also weighed in, insisting: ‘The sanctions that we talked about, we’re very serious about.’

Blinken also reiterated Sunday the U.S. will not ‘be in a position to evacuate’ any Americans from Ukraine should Russia invade, and urged any remaining U.S. citizens in the country to leave as soon as possible.

WATCH: Secretary of State Antony Blinken says he plans to meet with Russian Foreign Minister Sergey Lavrov this week, provided a war hasn’t begun in Ukraine. #MTP #IfItsSunday@SecBlinken: “It’s my responsibility to do everything I can to try diplomatically to prevent a war.” pic.twitter.com/b3ufYQ2WeB

The U.S. has already started its deployment of 5,000 troops to Poland and Romania and there are 8,500 more still on heightened alert for potential deployment.

‘Do you think there is any risk to our troops?’ Raddatz asked the Pentagon chief in her pre-taped interview.

‘I think our troops will be fine,’ Austin insisted. ‘We will be very diligent in terms of thinking through the range of possibilities.’

Biden approved deployment earlier this year of troops from the 82nd and 18th Airborne Corps out of Fort Bragg, North Carolina.

Vice President Kamala Harris told reporters Sunday that the U.S. may face ‘some costs’ associated with involvement in Europe should Russia invade Ukraine, which she also claims is all but certain.

When asked before departing Germany for the U.S. if Americans should be braced for economic fallout from involvement, the vice president said ‘sure.’

‘When America stands for principles, and all of the things that we hold dear, it requires sometimes for us to put ourselves out there in a way that maybe we will incur some cost,’ Harris told a group of seven reporters in Munich on Sunday. ‘And in this situation, that may relate to energy costs, for example.’

‘But we are taking very specific and appropriate, I believe, steps to mitigate what that cost might be if it happens,’ she added.

Harris repeated President Biden’s claim that Putin has already made up his mind that he will invade Ukraine and admitted the path for diplomacy is ‘narrowing’.

‘We believe he has made his decision. Period,’ she said when asked if there was any evidence to point to impending invasion.

Biden on Friday said he believed Vladimir Putin had already made up his mind to invade.

He delivered his verdict at the end of an intense week of diplomacy and amid reports of explosions in territory held by pro-Russian separatists that officials believe could be false-flag attacks and a precursor to an invasion. Pro-Russian rebels accused Ukrainian forces of blowing up a gas pipeline hours after a car bomb hit Donetsk.

After delivering an update on the crisis, Biden was asked if Putin had decided.

‘As of this moment, I’m convinced he’s made the decision,’ he told reporters at the White House on Friday afternoon. ‘We have reason to believe that.’

He said it was based on Washington’s ‘significant intelligence capability.’ But he insisted Putin could change course if he wanted to.

‘Russia can still choose diplomacy,’ he said. ‘It is not too late to de-escalate and return to the negotiating table.’

Harris publicly warned Putin in a Saturday speech at the Munich Security Conference of the ‘swift and severe’ consequences he will face if he escalates tensions in Eastern Europe, but reiterated on Sunday that sanctions will not be imposed until the point of invasion.

‘The purpose of the sanctions has always been and continues to be deterrence,’ Harris said. ‘But let’s also recognize the unique nature of the sanctions that we have outlined. These are some of the greatest sanctions, if not the strongest that we’ve ever issued, as I articulated yesterday. It is directed at institutions, in particular financial institutions, and individuals, and it will exact absolute harm for the Russian economy and their government.’

It is unclear how the U.S. intends to ‘deter’ with sanctions if the administration will not allow Congress to pass a sanctions act before the point of invasion. 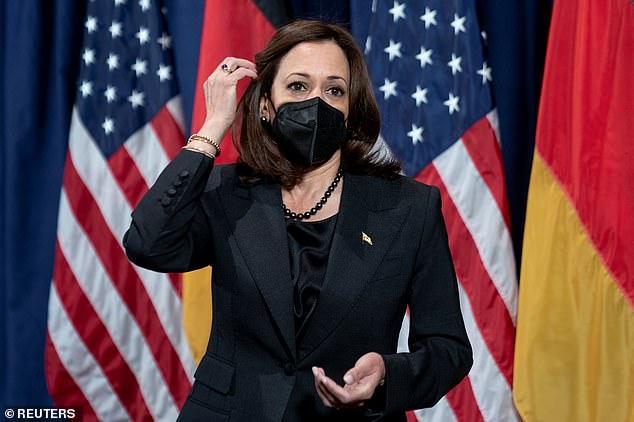 Vice President Kamala Harris reiterated on Sunday that sanctions will not be imposed until the point Russia invades Ukraine, which she suggested is inevitable and claimed the U.S. will face ‘some costs’ due to involvement in the conflict

One reporter pointed to this on Sunday, asking: ‘But if Putin has made up his mind, do you feel that this threat that has been looming is really going to deter him?’

‘The Allied relationship is such that we have agreed that the deterrence effect of these sanctions is still a meaningful one,’ she continued. ‘Especially because remember also, we still sincerely hope that there is a diplomatic path out of this moment. And within the context, then, of the fact that that window is still opening, although I open although it is absolutely narrowing, but within the context of a diplomatic path still being open. The deterrence effect we believe has merit.’

Ukrainian President Volodymyr Zelensky has called for sanctions to be imposed immediately, claiming it was no good to him if they were enacted after Putin attacked.

‘What are you waiting for?’ he said Saturday. ‘We don’t need your sanctions after the bombardment will happen.’

‘Why would we need those sanctions then?’ he lamented.

On Sunday, Zelensky called for an immediate ceasefire in the eastern part of Ukraine, where clashes between pro-Russian separatists and Ukrainian forces intensified in recent days.

He said he supports peace talks within the Trilateral Contact Group, which includes Ukraine, Russia and the Organization for Security and Cooperation in Europe (OSCE). The group is meant to facilitate a diplomatic resolution to the war in the Donbass region of Ukraine.

‘We stand for intensifying the peace process. We support the immediate convening of the TCG and the immediate introduction of a regime of silence,’ Zelensky tweeted.