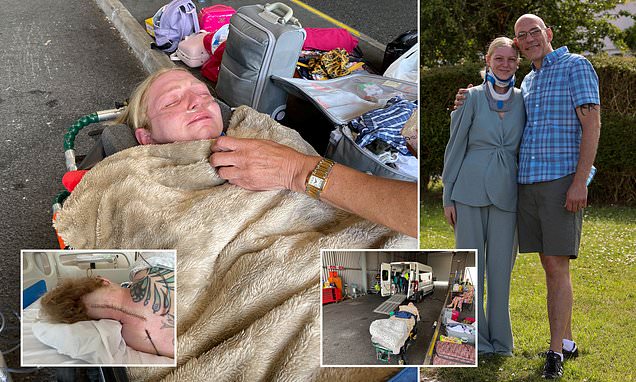 British mother, 36, returning from life-saving brain surgery in Spain is accused of DRUG SMUGGLING by UK border force officials and has ambulance she was travelling in ‘stripped to pieces’

A British mother returning from a life-saving brain operation in Spain has endured a ‘traumatic’ search by UK Border Force officials after she and her husband were accused of international drug smuggling.

Shocking pictures show Rachel Pighills, 36, sobbing while lying on a stretcher and connected to an oxygen tank inside a warehouse at the docks in Plymouth, where she was forced to wait for four hours while border agents meticulously searched their vehicle.

The couple, from Pershore, Worcestershire, had travelled by ferry on June 17 in a small second-hand ambulance driven by husband Guy, 41, which he claims agents ‘stripped to pieces’ in their failed bid to find narcotics.

Photos show their suitcases and belongings laid out on the ground of the docks during the search, which Guy said saw them ‘treated like criminals.’

The officials even brought out sniffer dogs, who in an ironic twist, failed to detect the powerful opiates Rachel had been given to control her post-op pain.

The mother-of-one was still recovering from a pioneering surgery she had received four weeks earlier after a ceiling fan struck the back of her head in August 2018, leaving her with atlanto axial instability and basilar invagination.

The conditions meant she was at risk of being ‘internally decapitated’, as her brain was literally sinking into her spine. 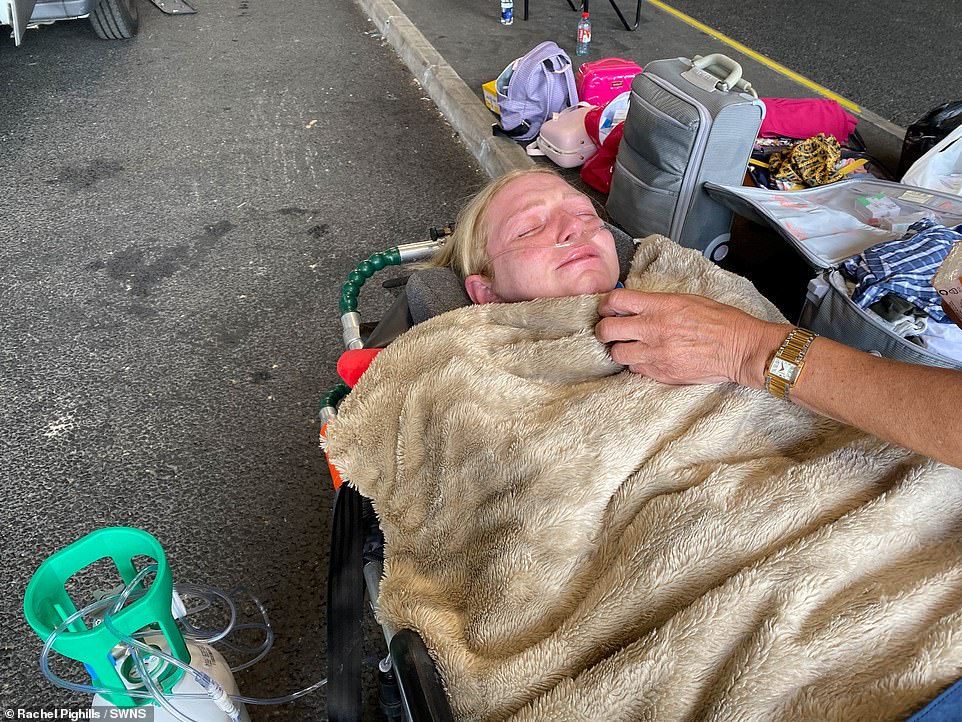 After a 20-hour overnight ferry from Santander to Plymouth, Rachel Pighills and her husband Guy were stopped by Border Force officials who accused them of drug smuggling. (Pictured: Rachel lying on a stretcher while connected to an oxygen tank inside a warehouse at the docks) 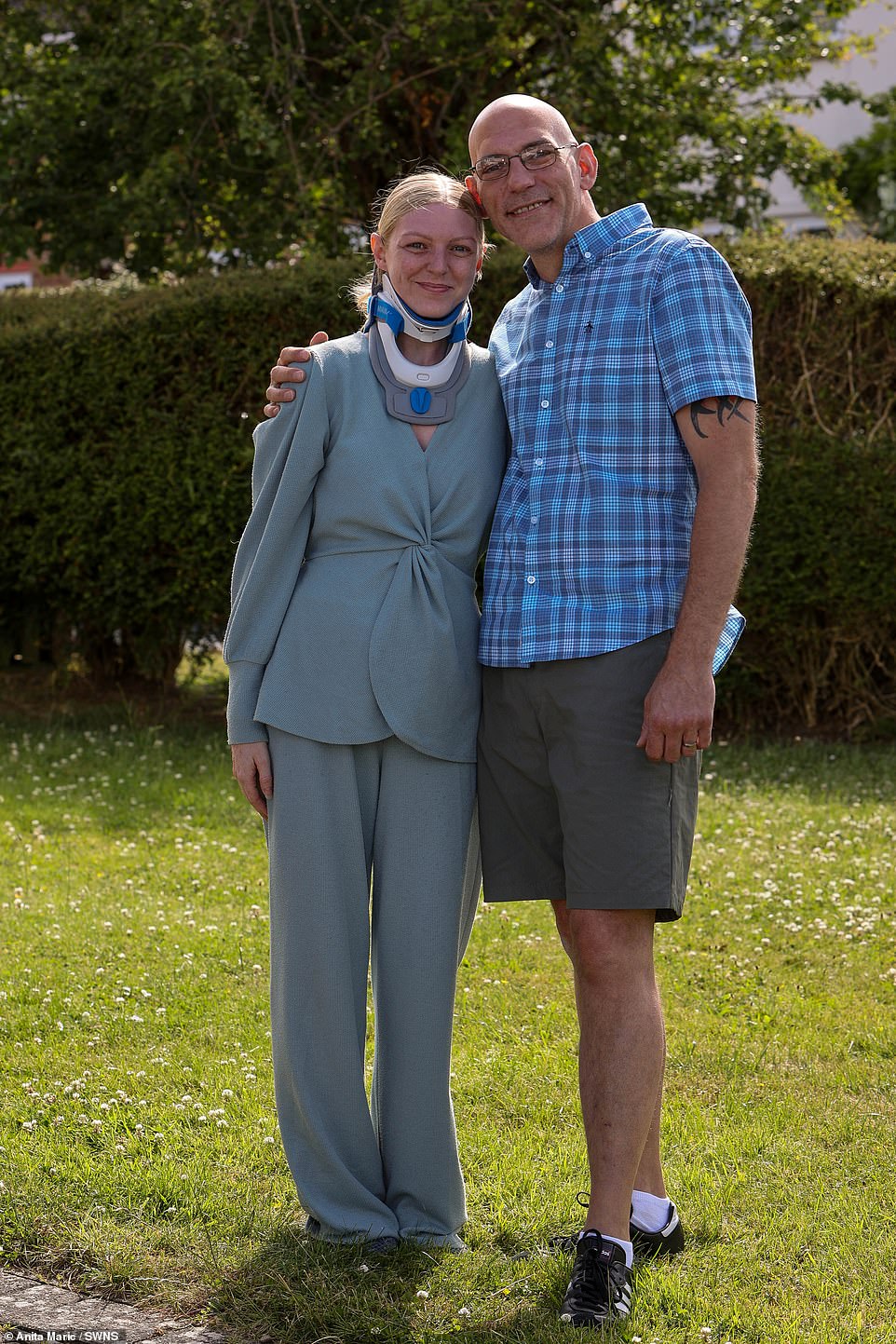 Rachel and husband Guy, 41, (pictured together) spent almost four years trying to raise £215,000 for pioneering surgery which is not available on the NHS. 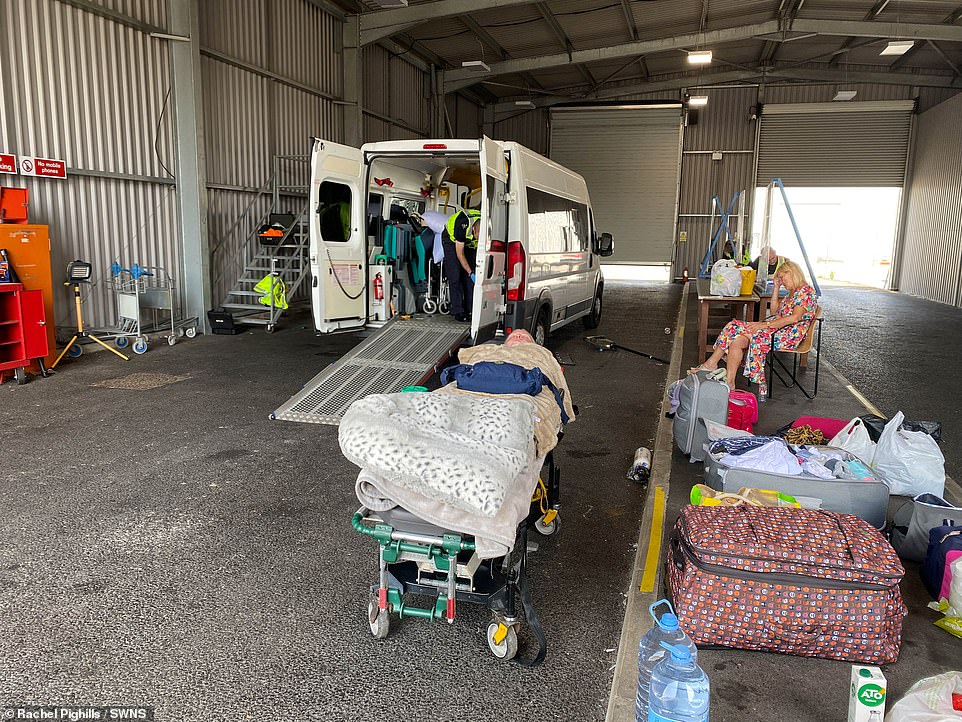 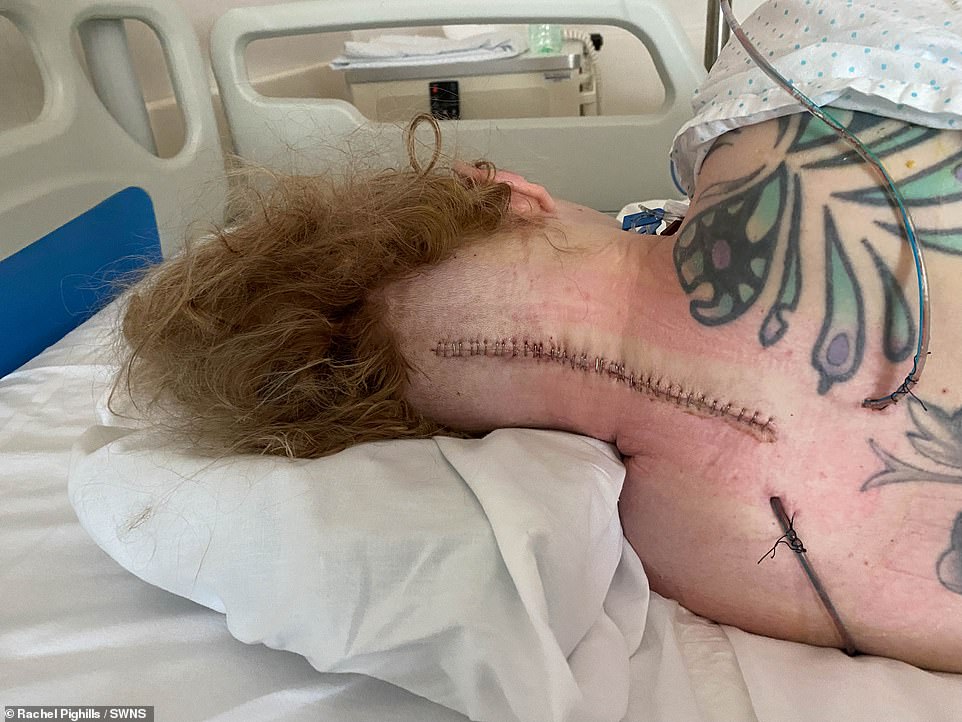 Rachel Pighills, 36, was left at risk of being ‘internally decapitated’ following a freak ceiling fan accident. She was moving into a new house in August 2018 when the whizzing blades of the fan smashed her on the back of the head. (Pictured: Rachel’s neck after surgery)

It meant she could no longer turn her head because each time she did her spine would partially dislocate, increasing the risk of paralysis or death.

Rachel and Guy, who share a 14-year-old daughter, spent almost four years trying to raise £215,000 for pioneering surgery which is not available on the NHS.

They finally reached the milestone earlier this year thanks to a woman in her 60s from Warwickshire who loaned them £130,000.

After being told it was too risky for Rachel to travel to Barcelona by plane for the operation, Guy drove her 1,055 miles in the ambulance.

The 13-and-a-half-hour surgery on May 20 involved inserting metal rods into her spine and re-setting the position of her skull and brain stem.

The operation was a success and after almost four weeks in hospital, Rachel and Guy drove back to the UK on June 17.

But after a 20-hour overnight ferry from Santander to Plymouth, they were stopped by Border Force officials who accused them of drug smuggling.

Rachel said: ‘After all we’ve been through, after the operation we were so looking forward to coming home.

‘When we arrived in Plymouth border force literally leapt on our vehicle and accused us of being drug smugglers. 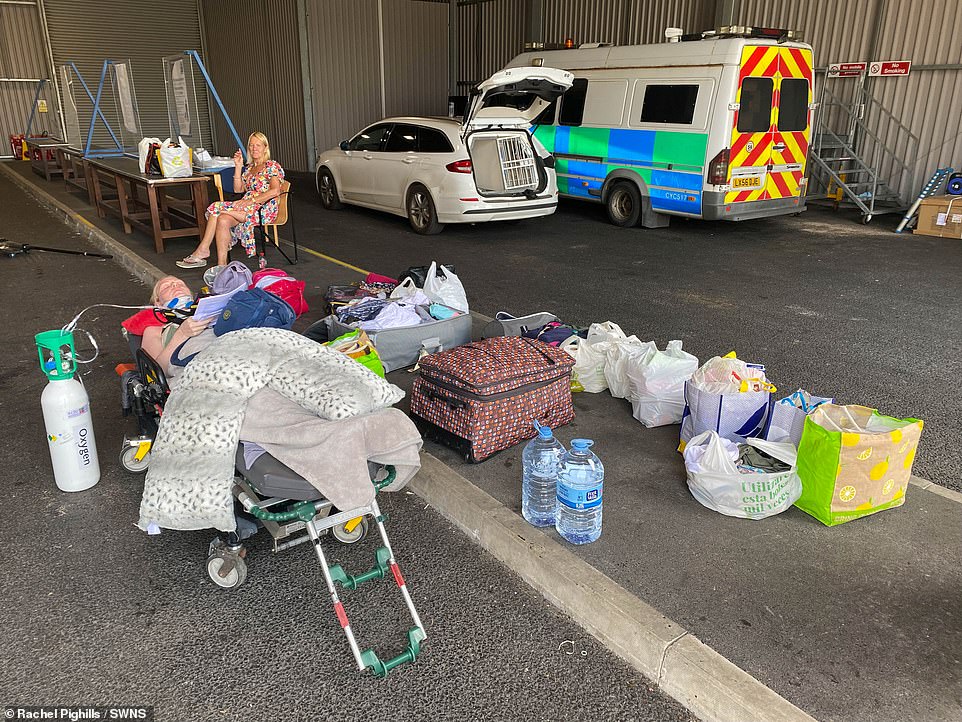 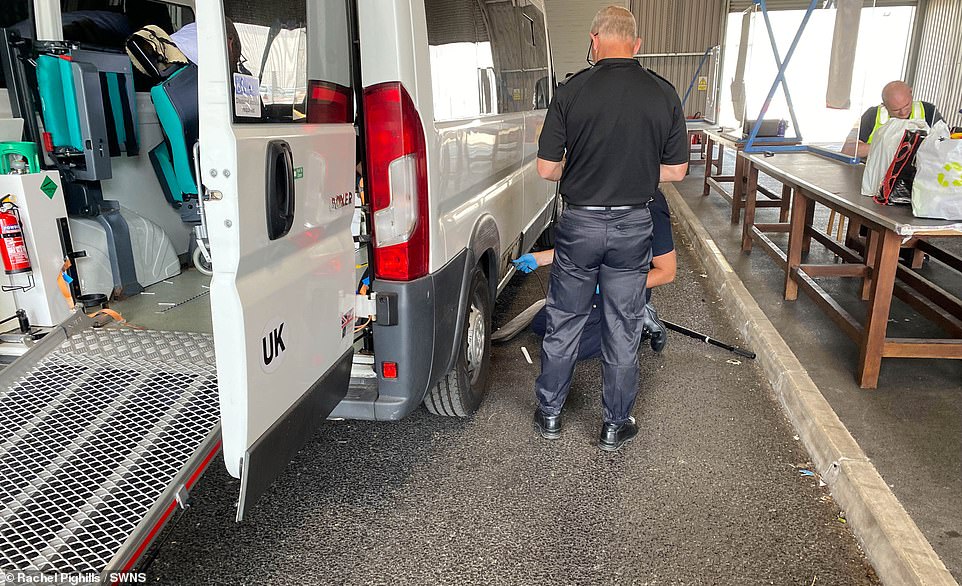 ‘I couldn’t believe it. We had all the documentation but they wouldn’t listen. One of them was really rude and looked quite disappointed when they couldn’t find anything.

‘Bizarrely, neither the sniffer dog or the officials found the big bag of opiates and painkillers I’d been given by the clinic.’

Guy, who had been forced to drive at just 40mph to avoid any sudden movements, comforted his wife while they were ‘treated like criminals’.

The operations manager said: ‘We got spotted by border control and they stripped our ambulance to pieces. They were convinced we were smuggling drugs into the country and we were there for three and a half hours.

‘They stripped the panels took the air panels off and shoved a camera everywhere and they found nothing.

‘It was horrendous, it was painful for Rachel and it has affected her recovery and set her back.

‘They asked her to get off the stretcher but we wanted her to stay which made them suspicious that we were trying to hide something. 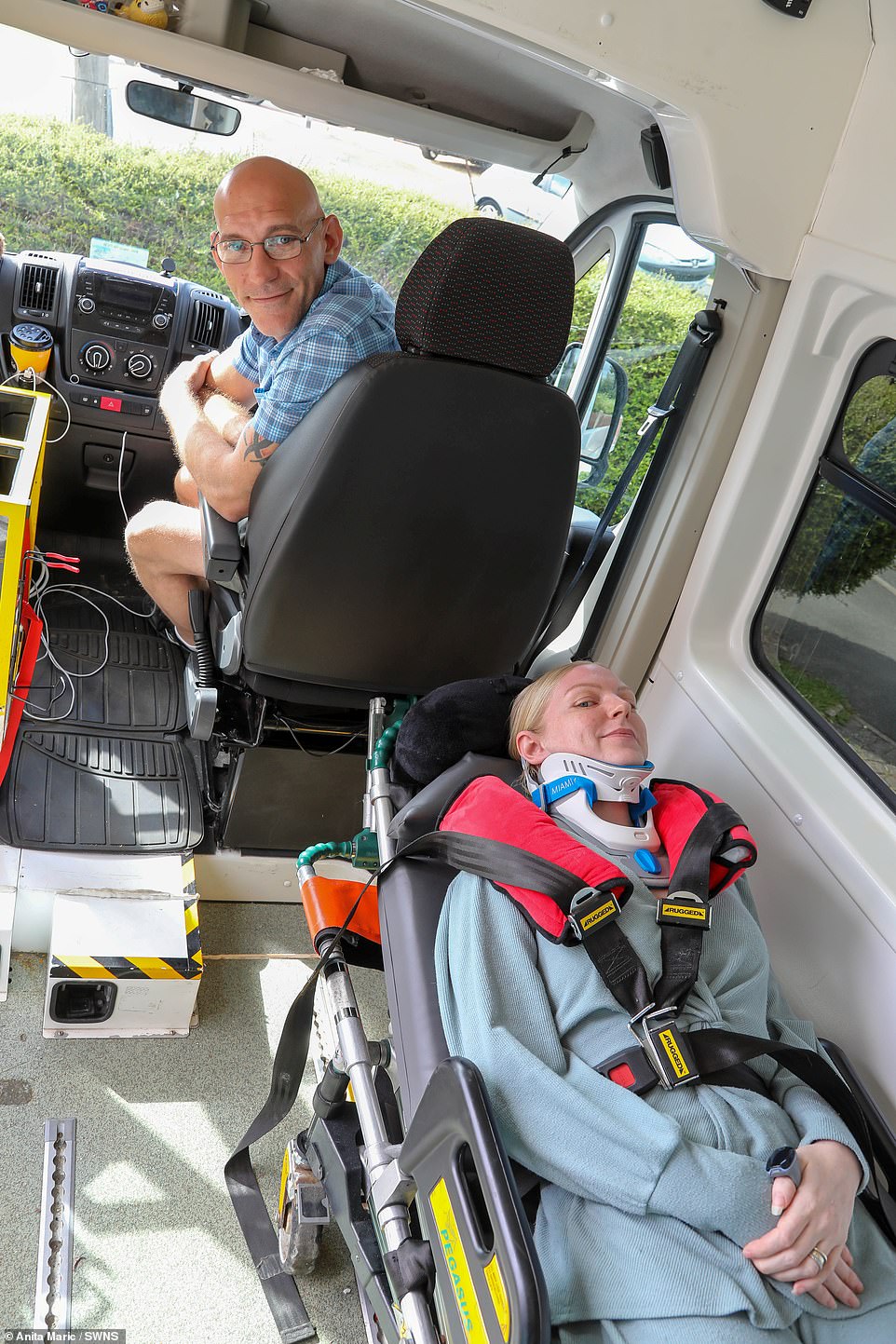 Guy, who had been forced to drive at just 40mph to avoid any sudden movements, comforted his wife while they were ‘treated like criminals’ during the Border Force search 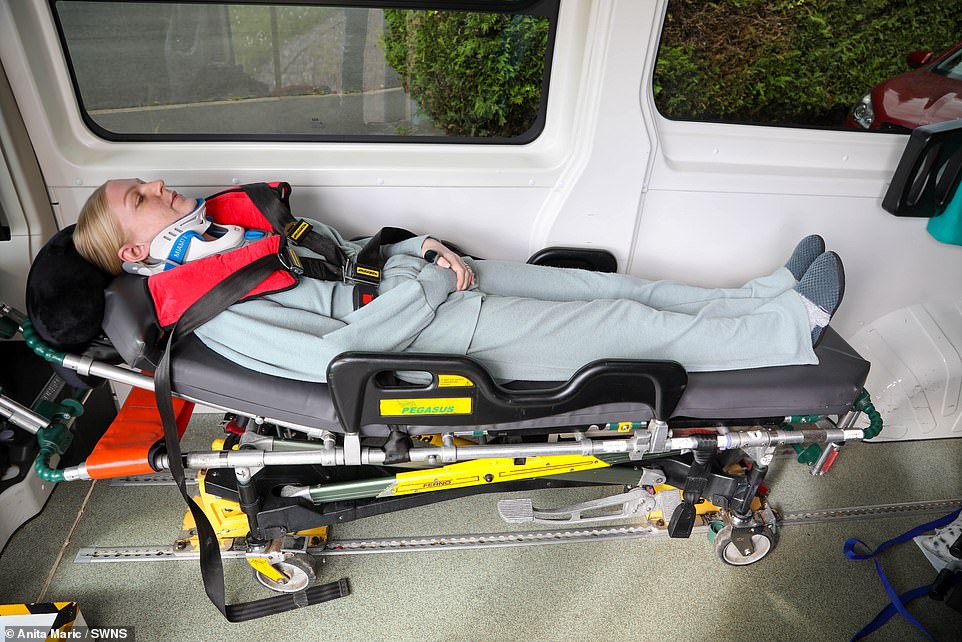 The couple, who have a 14-year-old daughter, eventually made it back home to their home in Pershore, Worcestershire, where Rachel (pictured) is now recovering

‘They made us wheel Rachel off the ambulance and bless her, she was screaming her head off when she was going down and then they stripped the ambulance and this affected her breathing and her oxygen levels due to the stress that this caused her.

‘They made us wheel the luggage off. We took months worth of Rachel’s medication but the dog didn’t even find that. All they found was a £20 note in Rachel’s purse.

‘As soon as we propped her up and they could see the dressing all down her back the mood changed. But we didn’t get an apology. It was the most traumatic experience I’ve ever been through.

‘We are British citizens, we have paid our way our whole lives. It’s a disgrace.’

Rachel said: ‘The recovery time for this operation is 12 months minimum.

‘Dr Gilete showed us a picture of the operation and it looked like a shark attack, which shows how severe it is.

‘I’ll be doing physiotherapy every day to regain my strength. I’ll always have to turn from my hips but my one goal is to take the dogs for a walk with my family.’

The couple are now raising money to pay back the £130,000 loan on their GoFundMe page. 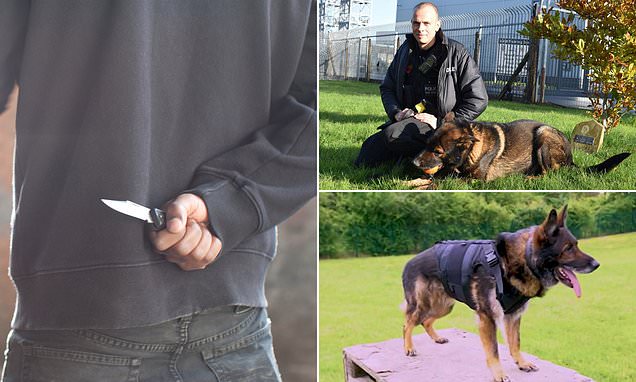