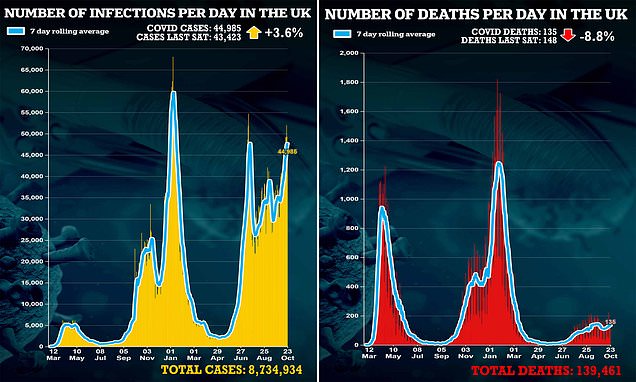 Britain’s Covid growth SLOWS: Daily infections are up 3.6% on last week after seven days of double digit growth – as expert predicts UK will be ‘locked down for Christmas’ despite SAGE models that show NHS should cope

The single figure increase comes after seven days of infections spiking by at least 10 persent, suggesting the recent uptick in cases may be beginning to slow.

And the number of people dying with the virus fell to 135 vandag. It was down 8.8 per cent on last Saturday’s toll of 148.

The figures come after a Government scientific adviser said he is ‘very fearful’ there will be another ‘inperking Christmas’.

But SAGE scientists insisted it was ‘highly unlikely’ that the NHS would be overwhelmed by the virus this winter even without restrictions.

Modelling by the group for England predicted that the combination of vaccine-acquired immunity and natural protection would be enough to keep hospital rates below levels seen during the second wave.

Health Secretary Sajid Javid said new cases could reach 100,000 a day but Downing Street insisted there was still spare capacity in the NHS and that Plan B would only be activated if it came under ‘significant pressure’.

Intussen, it was revealed Brits may need three Covid vaccinations to go on holiday next summer but under-50s are unlikely to receive a booster until ‘well after Christmas. 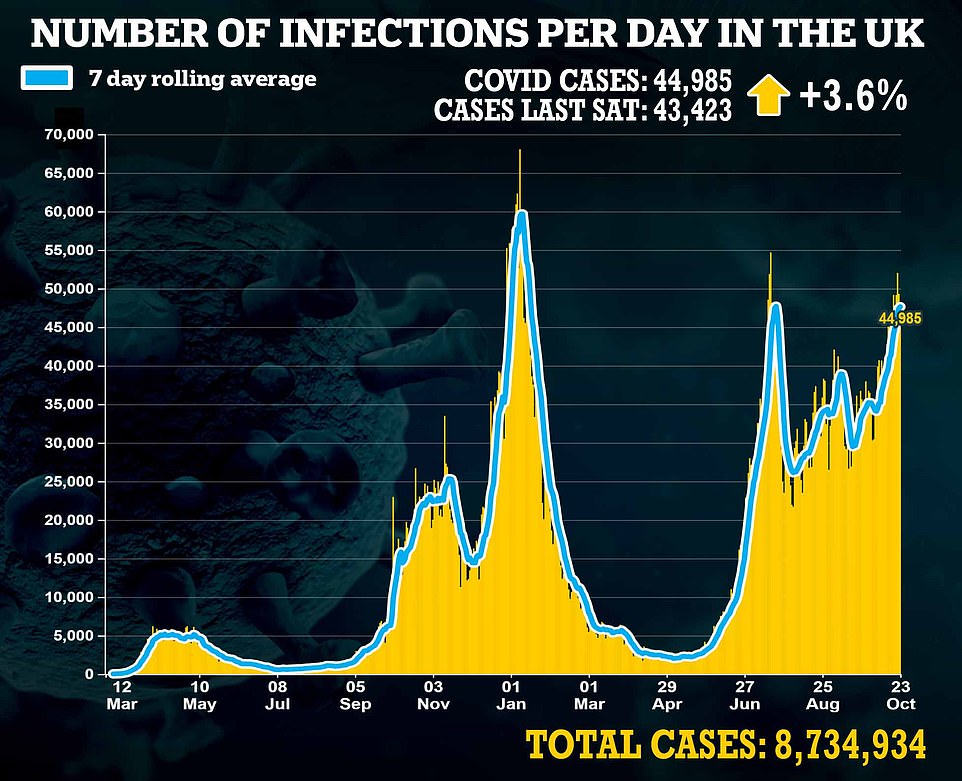 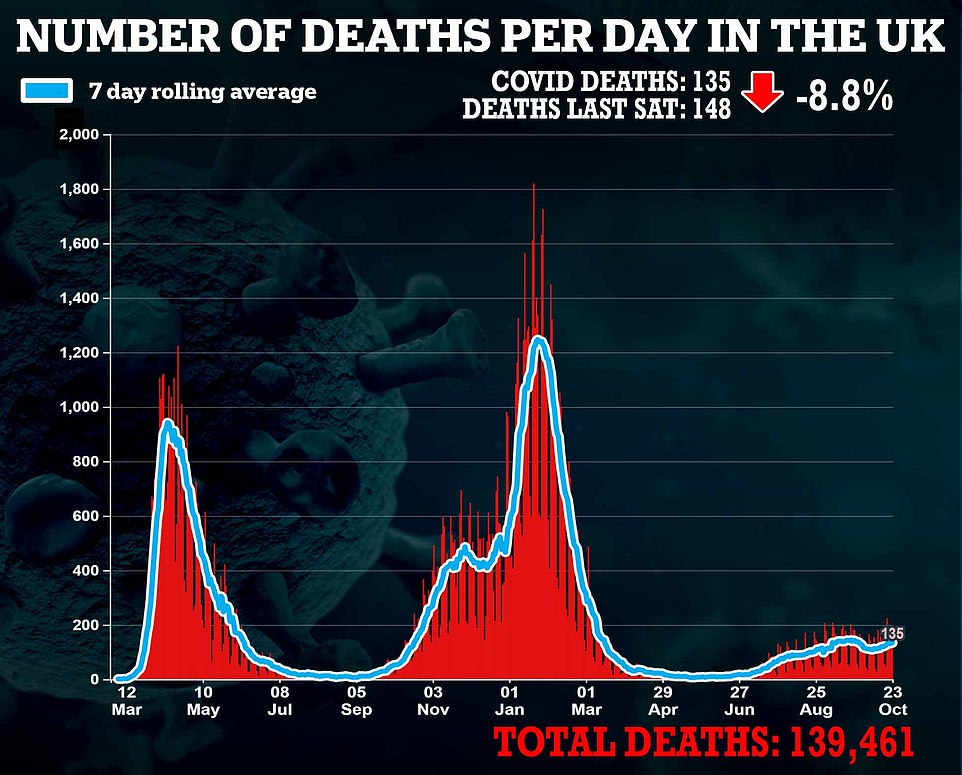 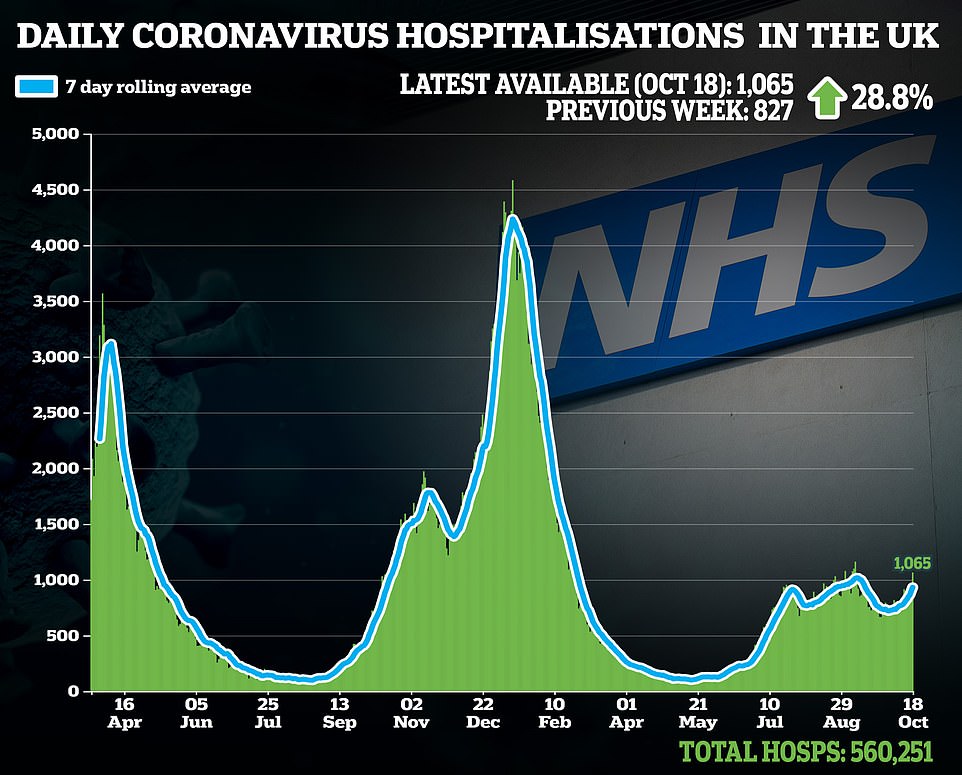 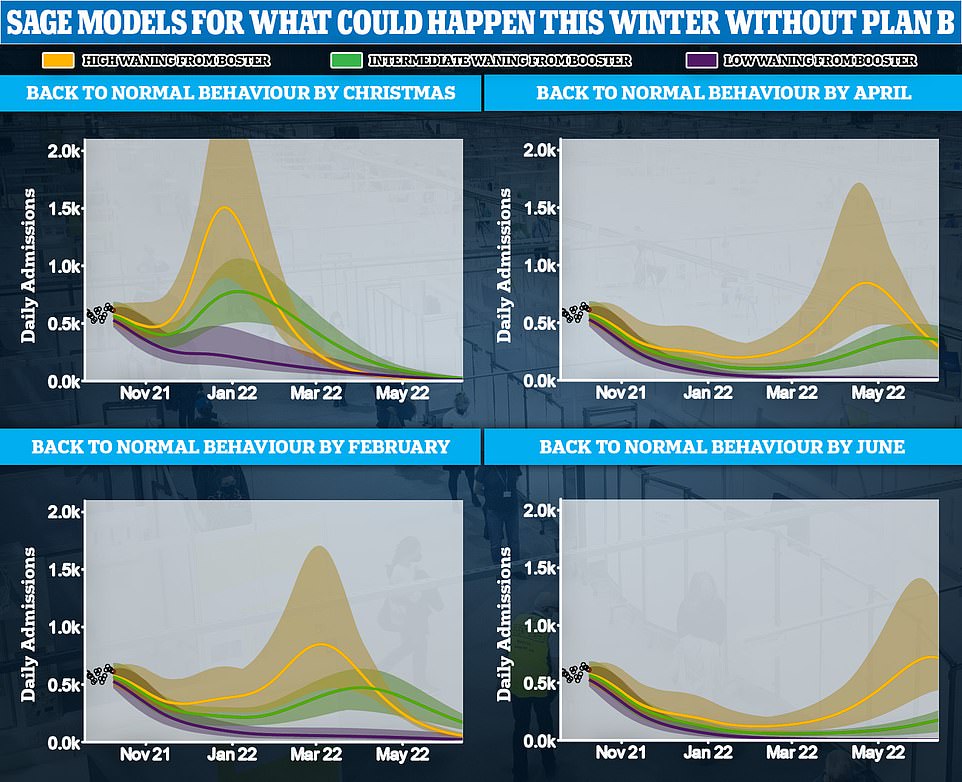 Modelling by SAGE predicted that the combination of vaccine-acquired immunity and natural protection would be enough to keep hospital rates below levels seen in the second wave. Even in the most pessimistic scenarios, the group estimated that daily Covid hospital admissions would not rise above 1,500. More optimistic models had them peaking at below 1,000 in winter. The above charts are based on modelling by Warwick University and look at how quickly people go back to pre-pandemic social contacts. It was based on the booster doses given ‘sustained’ immunity 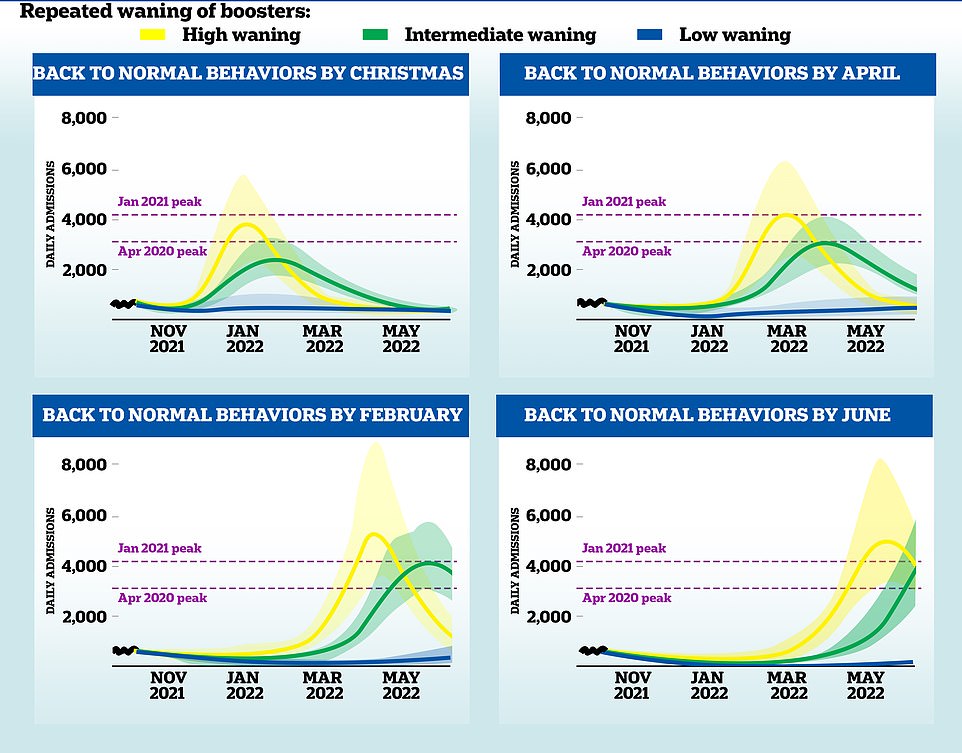 Other SAGE modelling took into account ‘repeated’ waning from booster doses, and projected that hospital admissions could breach levels seen during the second wave in January under the worst-case projections

Boris Johnson today insisted there is ‘absolutely nothing to indicate’ there will be another lockdown this winter.

The Prime Minister said a national shutdown is not ‘on the cards’ as he was grilled about rising coronavirus case numbers.

His comments came after Tory MPs and hospitality chiefs urged the PM to resist calls from health bosses to trigger the Government’s Covid-19 ‘Plan B’.

Conservative MPs fear going ahead with the fall back strategy of telling people to work from home and to wear face masks would put the nation on a ‘slippery slope’ towards another lockdown.

They are adamant there should be no return to draconian curbs, claiming that the Government must not be ‘bullied’ by health leaders into imposing new rules.

Intussen, hospitality bosses have warned against reimposing restrictions, telling the PM that many pubs, bars and restaurants would ‘go to the wall’.

The hospitality industry is concerned that even light touch restrictions could hit bookings and put ‘Kersfees at risk’.

The Government has insisted the triggering of ‘Plan B’ is not imminent, with the focus currently on rolling out vaccine booster shots.

But ministers struck an ominous tone this morning as they said the blueprint is ‘there for a reason’.

Separate figures published by the Office for National Statistics show there have now been 164,000 deaths registered in the UK where Covid was mentioned on the death certificate.

‘We know that with public health measures the time to act is immediately. There’s no point in delaying.

‘If you do delay then you need to take even more stringent actions later. The immediacy of response is absolutely vital if you’re going to get things under control.

‘We all really, really want a wonderful family Christmas where we can all get back together.

‘If that’s what we want, we need to get these measures in place now in order to get transmission rates right down so that we can actually get together and see one another over Christmas.’

Professor Openshaw said it is ‘unacceptable to be letting this run at the moment’, toevoeging: ‘I think the hospitals in many parts of the country are barely coping actually.

‘Talking to people on the front line, I think it’s just not sustainable to keep going at this rate.

‘I think it’s just unacceptable to see the number of deaths that we’ve got at the moment.

‘At one stage last week there were 180 sterftes in 'n enkele dag. That is just too many deaths. We seem to have got used to the idea that we’re going to have many, many people dying of Covid and that I think is just not the case.

‘We need to slow down transmission and really redouble efforts to get everyone vaccinated and all the boosters out, and then we can open up again.’

Professor Openshaw was asked what he would say to people who have concerns about what they can do to stop the spread of the virus in the event of the Government not reintroducing measures.

He told the programme: ‘I think take matters into your own hands. Don’t wait necessarily for Government policy. 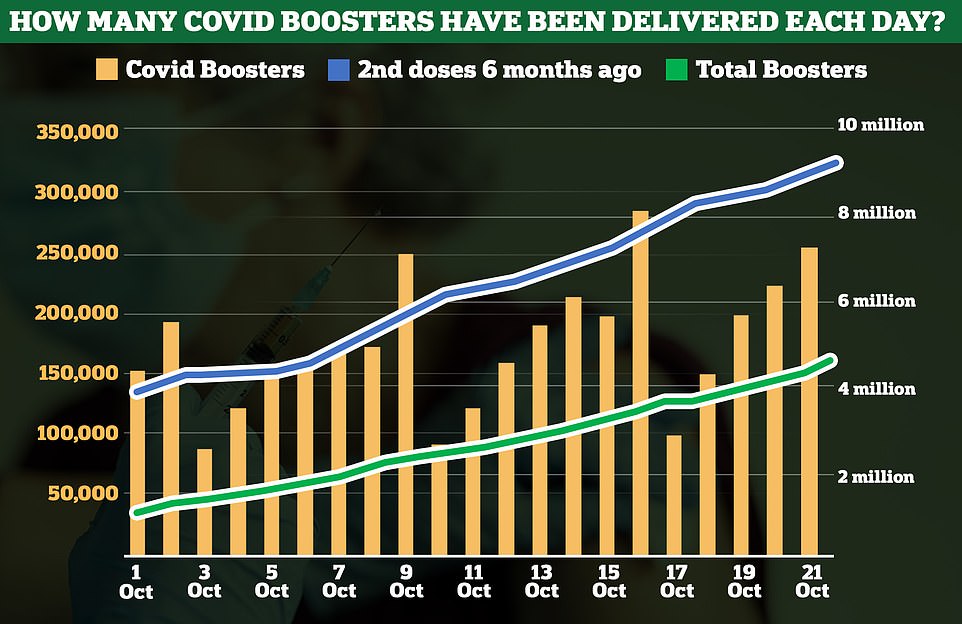 Only around 4.5million (groen lyn) out of the 9.3million eligible people (blou lyn) in England have received the crucial third dose, prompting ministers to urge people to come forward for their inoculations

SAGE scientists have insisted it was ‘highly unlikely’ that the NHS would be overwhelmed by the virus this winter even without restrictions in advice that justifies No10’s bold decision to reject immediately resorting to ‘Plan B’.

Modelling by SALIE for England predicted that the combination of vaccine-acquired immunity and natural protection would be enough to keep hospital rates below levels seen during the second wave.

Even in the most gloomy central scenarios, the group estimated that daily Covid hospital admissions would not rise above 1,500 this winter. More optimistic models had them peaking at below 1,000, but suggested they could peak next spring. Daily numbers published by the Government include all four UK nations.

The SAGE forecasts assumed that a modest 1.3million elderly and vulnerable people are given a Covid booster vaccine per week over the coming months, which is roughly in line with the current rate, en dit 90 per cent of eligible over-50s, NHS workers and at-risk adults take up the offer.

In documents submitted to ministers last week but only published today, SAGE said there was some evidence that the peak of the third wave, in terms of hospitalisations, ‘has already happened’.

But the panel of top scientists — which include Sir Patrick Vallance and Professor Chris Whitty — warned against complacency, adding there was still a threat if people suddenly drop all precautions, vaccines suddenly wane in younger groups or a new variant becomes dominant.

They told the Government to have contingencies in place so that face masks, working from home and vaccine passports can be quickly introduced if the epidemic suddenly deviates from the ‘optimistic’ modellering. The group said the measures could make a ‘big difference’ if enacted quickly.

'Ek is baie, very reluctant now to go into crowded spaces because I know that roughly one in 60 people in a crowded space are going to have the virus. If you can, cycle to work, don’t go on public transport.

‘I think do everything possible in your control to try to reduce transmission. Don’t wait for the Government to change policy.

‘The sooner we all act, the sooner we can get this transmission rate down, and the greater the prospect of having a Christmas with our families.’

Elders, the World Health Organisation warned the vaccine alone will not be able to lift the world out of the pandemic.

Spokesperson Margaret Harris told Times Radio: ‘The problem is focusing on one thing, the vaccine isn’t going to get us out of this.

‘We really have to do other measures.

‘We have got to be serious about not crowding. We have still got to be looking at wearing the masks, when you’re indoors particularly.’

Scientific advisers have told the Government it must ensure Plan B restrictions to tackle coronavirus can be ‘rapidly’ deployed if needed.

Experts on the Scientific Advisory Group for Emergencies (salie) gesê, in minutes of a meeting published on Friday, that a further huge spike in infections as seen in January was ‘increasingly unlikely’, as experts predicted a series of broader, flatter peaks as the virus continues to spread.

Egter, in its meeting dated October 14, Sage warned measures from the Government’s Plan B would have greatest effect if brought in in unison and earlier on rather than later.

Scientists are in favour of a relatively light-touch approach, implemented earlier to make a difference, with Sage saying the ‘reintroduction of working-from-home guidance is likely to have the greatest individual impact on transmission out of the proposed measures’ in Plan B.

Chancellor Rishi Sunak told The Times the country could not return to ‘significant economic restrictions’ and that the vaccine rollout meant this was not necessary, while Boris Johnson also said on Friday that another lockdown was not planned.

UK Hospitality CEO Kate Nicholls warned that businesses will not survive another winter of lockdown restrictions.

Asked on Times Radio if she thought businesses would survive if the Government goes ahead with Plan B, sy het gese: ‘No I don’t, bluntly. We have already lost 12,000 businesses.’

She said that when restrictions are in place ‘consumers do stay at home, they don’t go out and socialise’.