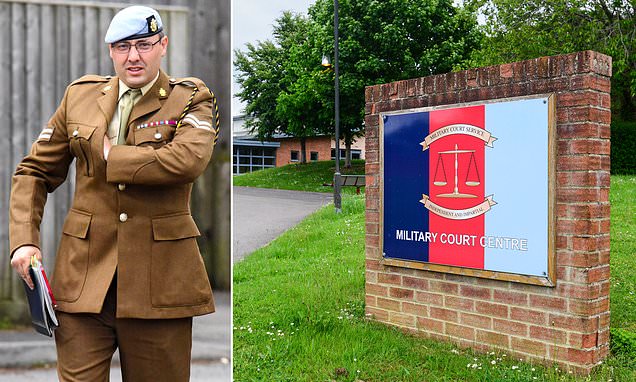 Britse weermagkorporaal, 37, is kicked out of the Army for grinding into younger female soldier’s bottom and pestering her for naked pictures

A corporal has been kicked out of the British Army for grinding into a female soldier’s bottom in a tea room on base.

Cpl Phillip Marshall-Nichols, 37, thrust his groin into the Private’s bottom as he was leaving the room having made a cup of tea.

A court martial heard he also persistently asked his female subordinate for photos of her in the shower after she had done physical training sessions and branded her a ‘spoilsport’ when she refused.

The Corporal meanwhile told the hearing that camera emojis he sent the female Private while attempting to solicit naked images of her were merely ‘banter’.

The father of three also suggested his messages to the female soldier were instead innocent requests for photos of ‘resin’ models she had been making.

He denied two counts of sexual assault and was cleared of grabbing the female Private’s breasts after she had asked for help finding information on a computer system.

But he was convicted of the tea room assault and discharged from military service.

Marshall-Nichols was also reduced in rank and ordered to complete 20 rehabilitation days as well as 200 ure se onbetaalde werk. 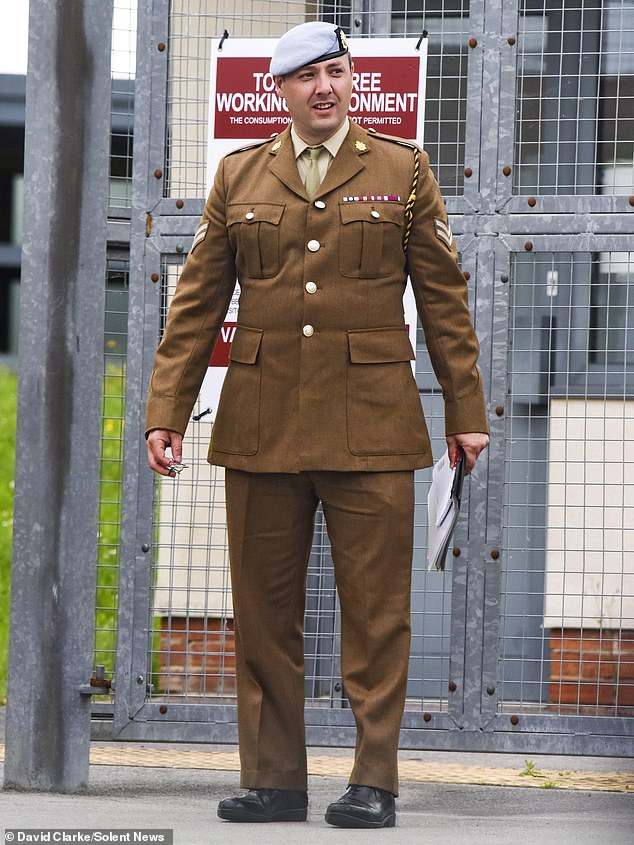 Cpl Phillip Marshall-Nichols, 37, was found guilty of one count of sexual assault against a younger female subordinate 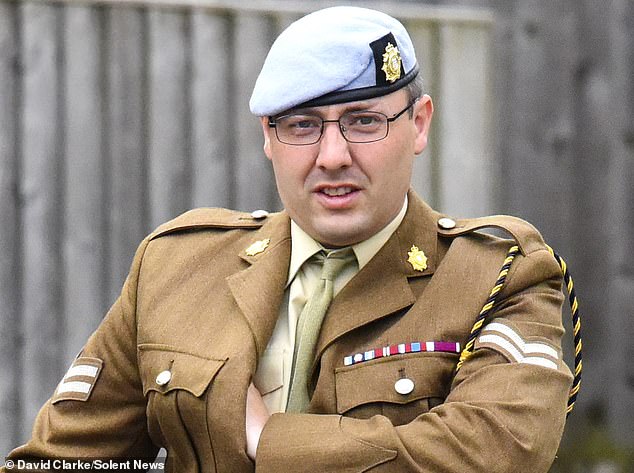 At his sentencing hearing, Marshall-Nichols’ lawyer Simon Perkins said: ‘He knows he has thrown away his career, his reputation – prior to this he was a well-regarded junior non-commissioned officer [NCO]. He has thrown everything away.’

In an impact statement read to the court, the victim said the incident has destroyed her confidence and trust in the chain of command.

Sentencing Marshall-Nichols, Judge Advocate Jane England told him: ‘There is no doubt your behaviour has had a negative impact.

‘This was not the conduct expected of a junior NCO – you had responsibility towards your subordinates.

‘There was a significant difference in age and it was done in front of another soldier, which added to her humiliation.’

Bulford Military Court previously heard Cpl Marshall-Nichols, van 16 Medical Regiment who served for more than 16 jare, was stationed with the woman at an Army barracks in Colchester, Essex.

They had a purely professional relationship and had known each other for at least a year before the grinding incident.

The victim told the court she had been talking to a male soldier when Cpl Marshall-Nichols paused behind her and ‘grinded’ his penis into her bottom as he left the room.

Die vrou het gesê: ‘Cpl Marshall-Nichols was making a brew. At one point he moved to leave the room, and as he passed me he stopped and grinded his dick into my arse, Links na regs.

‘He didn’t say anything and it didn’t go on for long, but I could feel his penis.’

The other soldier in the room at the time told the court he saw a look of shock and fear cross his friend’s face as Cpl Marshall-Nichols stopped behind her.

The former private, who has since left the military, gesê: ‘It looked like a joke at first but you could tell by her facial expression that she was scared.

‘It just happened out of the blue and went on for a couple of seconds.’

The female soldier reported the incident to another corporal and received private messages on Snapchat from Cpl Marshall-Nichols after returning from Christmas leave.

‘It was after PT, which we had three times a week, when I was going to take a shower,’ sy het gese. ‘He was there when we did PT.

‘He was asking for pictures while I was in the shower. I just said, ”Geen”.’ 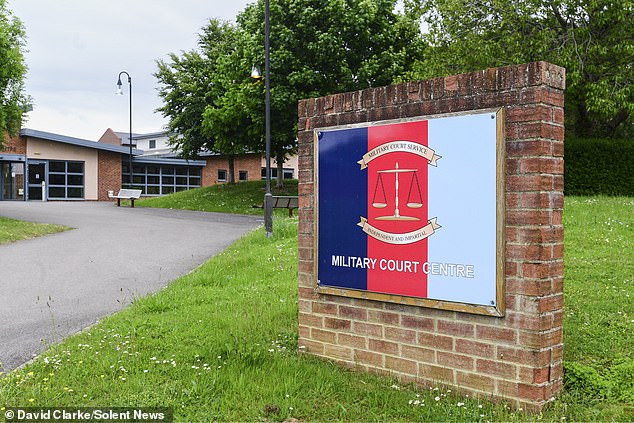 Cross-examining Cpl Marshall-Nichols, Commander Peter Barker, vervolging, gesê: ‘You sent two emojis – a camera with flash and one without… that is a request for photos.

‘Her response is: 'Geen'. A flat refusal. You respond immediately, sê: ‘Spoilsport lol’ and the crying laughter emoji.

‘You are pestering one of your subordinates for a picture in the shower.’

Cpl Marshall-Nichols told the court it was simply ‘banter’ and that ‘we were having a laugh’.

When questioned on what the camera emojis referred to, Cpl Marshall-Nichols replied: 'Op daardie stadium [the female soldier] was into resin.

‘She had told me about them and showed me her figures.

'Op daardie stadium [van die boodskappe], I could have been requesting to see what she was doing with them.’

The court heard that during an Easter break the female Private went into work to update her ‘objectives’ on a computer system before an upcoming exercise, and asked for assistance from Cpl Marshall-Nichols.

Sy het aan die hof gesê: ‘He came over and I got off the swivel chair… I moved behind the chair.

‘Then he turned around and touched my boobs. He touched both my boobs with both his hands.’

He was cleared of grabbing the female soldier’s breasts.

Cpl Marshall-Nichols, who has a long service and good conduct medal as well as the Platinum Jubilee medal, became a Corporal in 2016 after joining the Army in 2005. 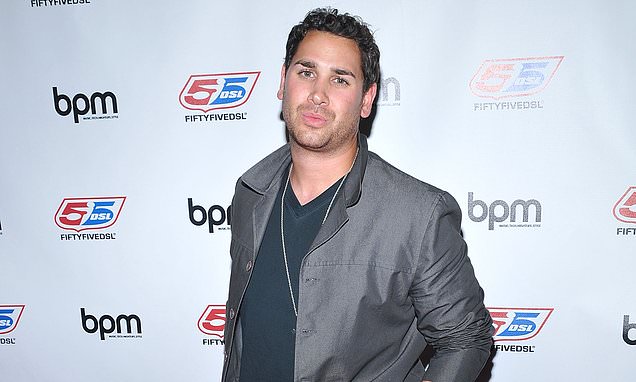 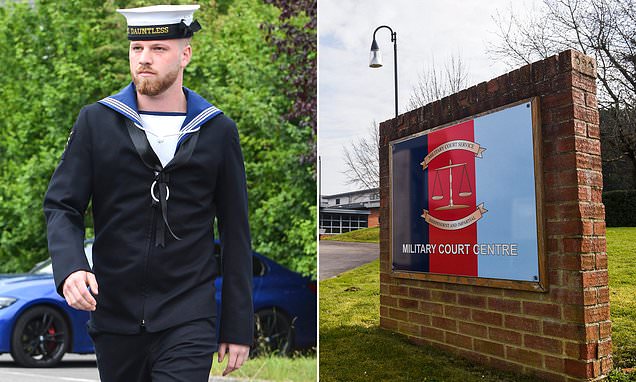 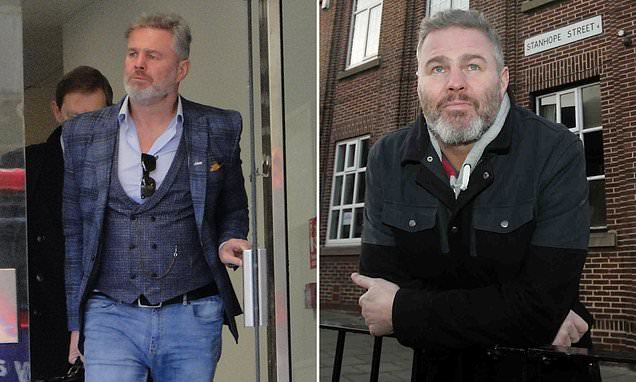