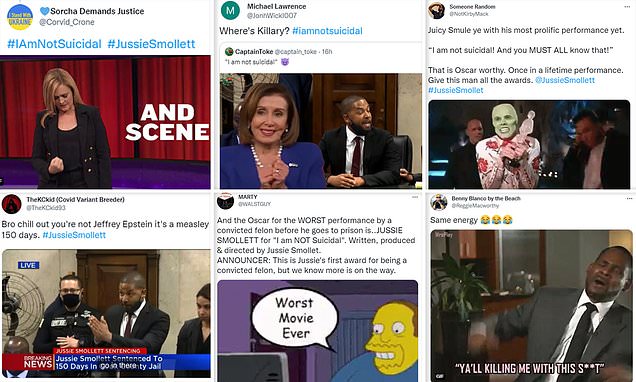 ‘Bro chill, you’re not Jeffrey Epstein… and you only got 150 days!’ Jussie Smollett is mercilessly mocked for melodramatic courtroom outburst claiming he’s going to be attacked in jail while serving two months in protective custody

Committed to his story until the very end, Jussie Smollett protested ‘I AM INNOCENT! I AM NOT SUICIDAL!’ as he was led away in handcuffs to begin his 150-day jail sentence yesterday for lying to police about being the victim of a racially motivated hate crime.

And while the 39-year-old actor kept a straight face throughout his outburst, it sent many others into fits of laughter.

Smollett’s performance in the courtroom is now being mercilessly mocked online, with some questioning who the actor thinks is out to get him.

‘Bro, chill out. You’re not Jeffrey Epstein. You only got a measly 150 days,’ one Twitter user said, referring to Epstein’s suspicious jail suicide which conspiracy theorists have long thought was a murder to prevent him from ratting out other high profile pedophiles.

Jussie’s legal team say they are desperately worried about his safety. They have not, despite requests, clarified who they think wants to hurt him, or why.

‘The only thing that made my eyes roll harder than a Twilight movie was Jussie Smollett declaring how totally *not* suicidal he is. Yeah dude – nobody’s gonna Epstein you. Also, the fact that THAT is your try-hard goal is kind of f****d in the head,’ said one Twitter skeptic.

‘#JussieSmollett is flattering himself WAY too much claiming he’s gonna get Epstein’d, why does the dude love lying so much? You only got 150 days man, count your blessings and thank God,’ another said. 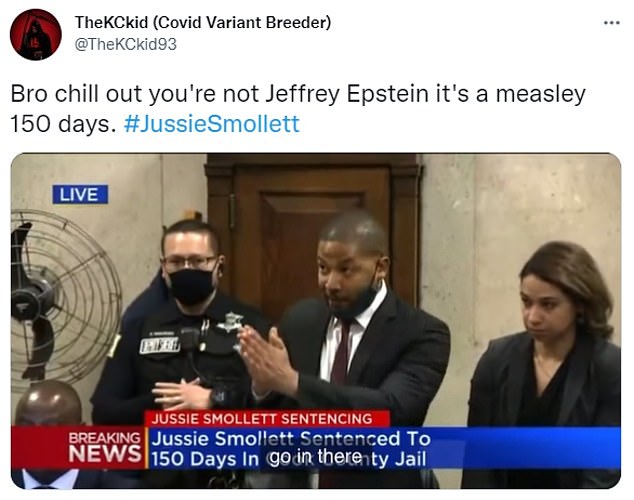 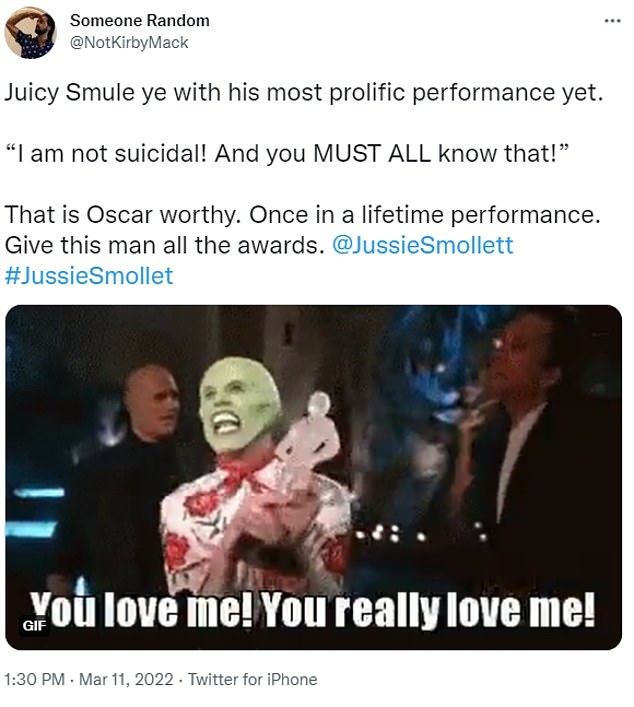 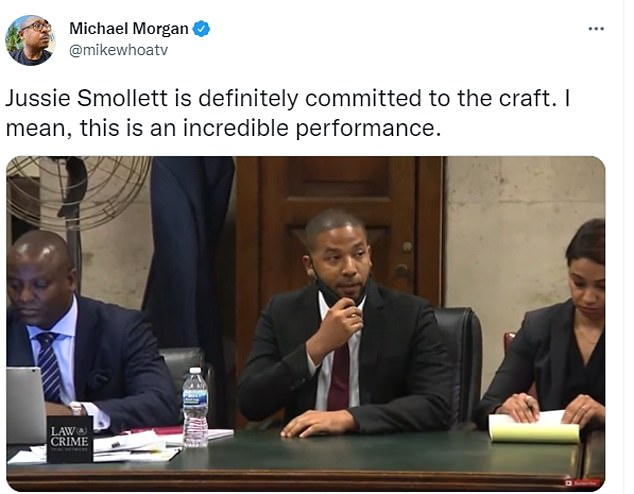 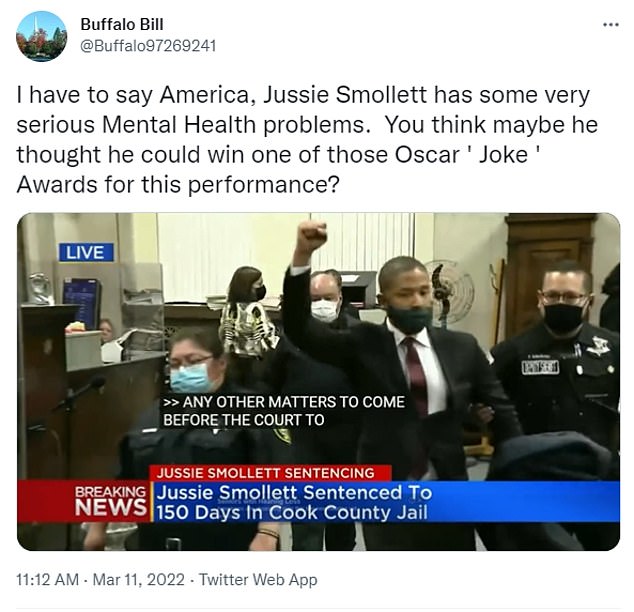 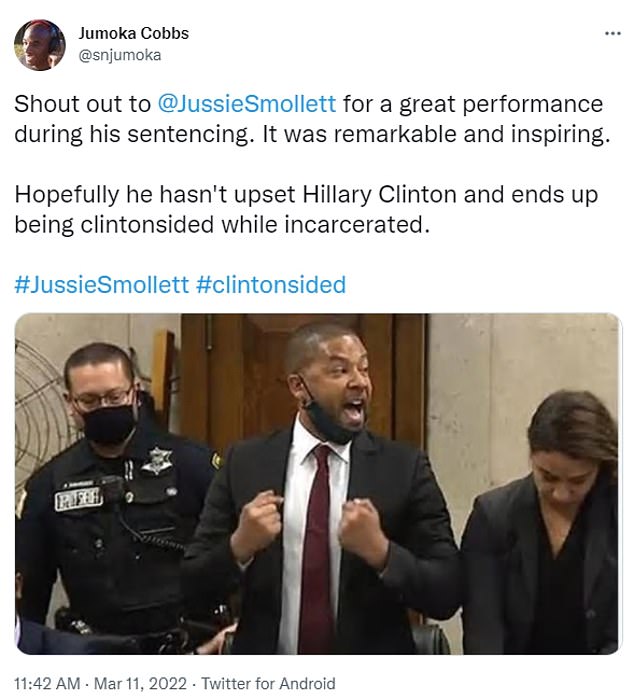 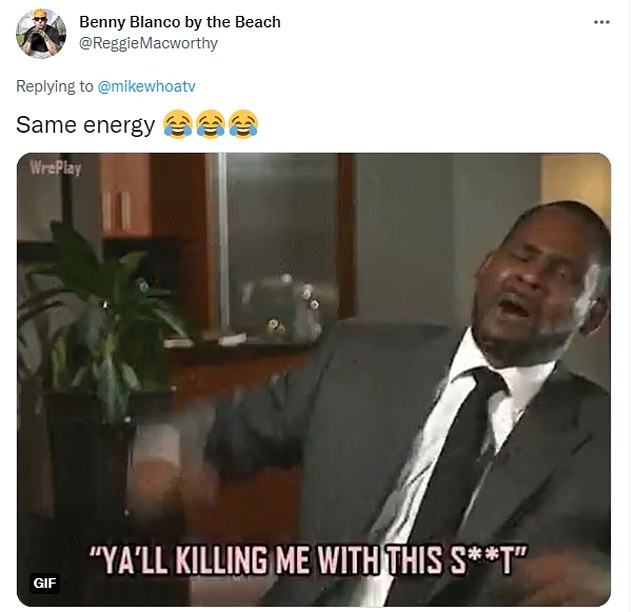 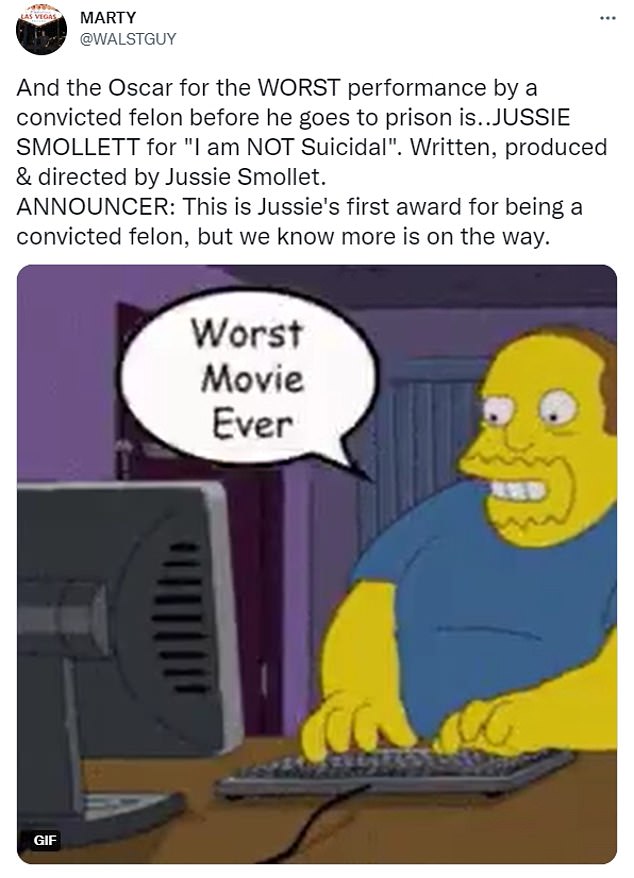 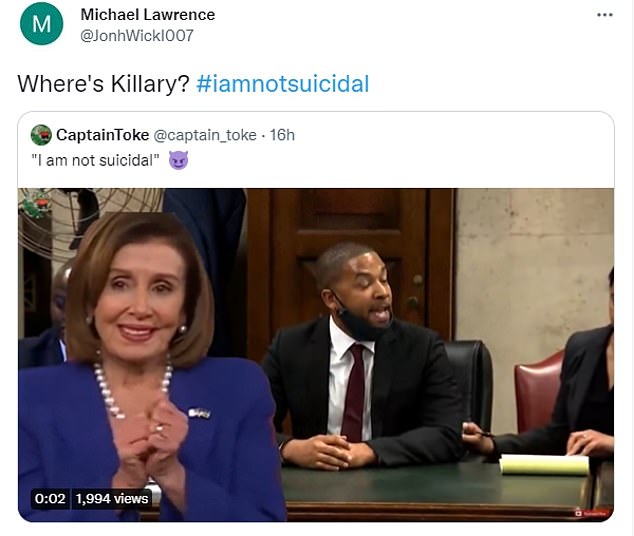 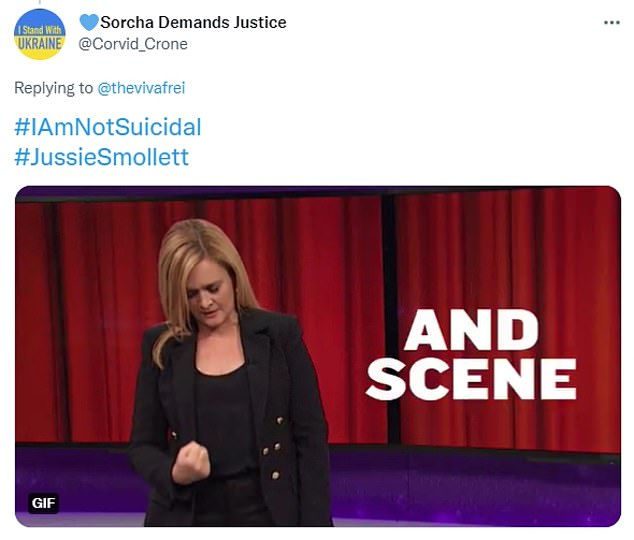 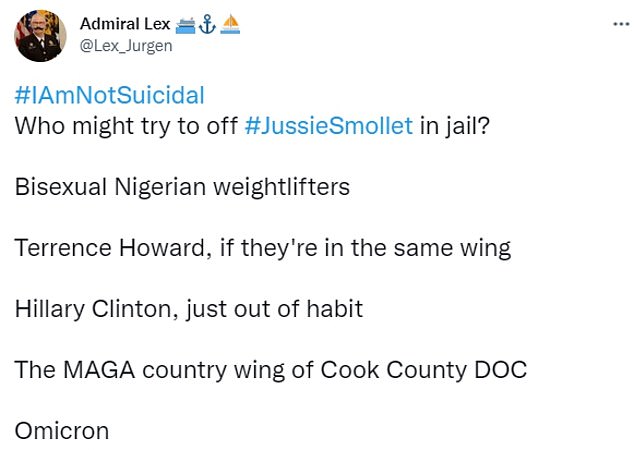 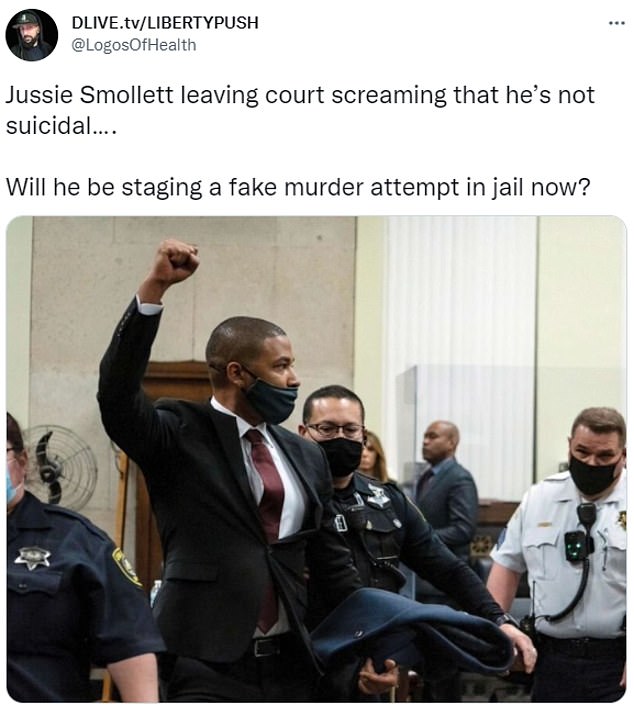 On Friday, the court agreed for Jussie to serve out his time in protective custody, away from the other inmates. 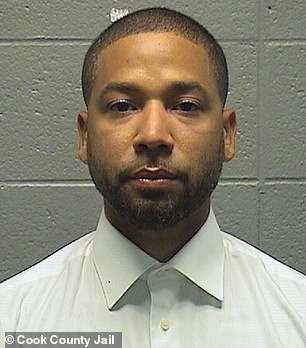 Jussie Smollett, seen in his new mugshot, held his fist up in defiance as he was taken from the courtroom to the Cook County jail Thursday

Some critics have now suggested that Smollett – who was convicted of staging a hate crime – may stage another attack in jail.

‘How long til he stages a hate crime or fake murder attempt in prison now?’ one person quipped.

As he was led out of court yesterday, Smollett whipped off his COVID mask to speak.

At first he was calm, sitting at the table where he had been all day, with his hands clasped.

”Your honor, I’d just like to say that I am not suicidal. That’s what I would like to say.’

Jussie continued, rising to his feet and pointing his finger in the air. ‘I am not suicidal! 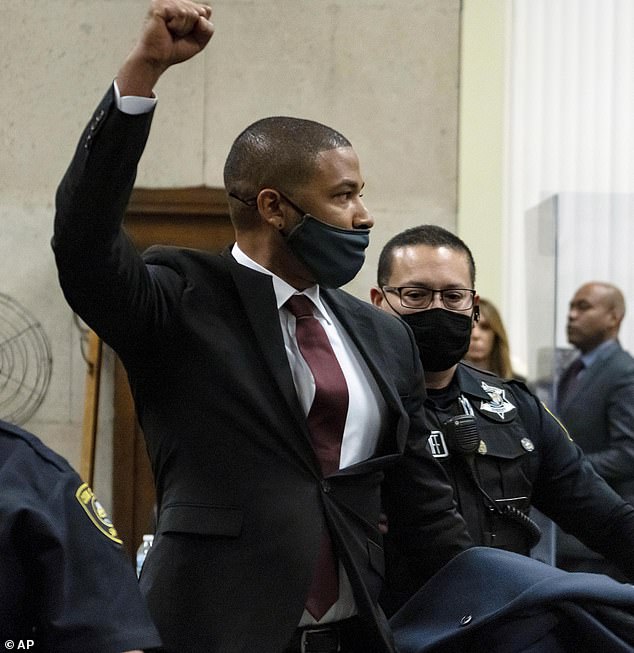 Jussie Smollett raises his fist in a Black Power salute as he is led out of court to begin his 150 day sentence, yelling over his shoulder: ‘I am not suicidal! I am innocent!’

‘Your honor I respect you and I respect the jury, but I did not do this! And I am not suicidal. If anything happens to me when I go in there, I did not do it to myself. And you must all know that.

His attorneys then asked the judge twice to delay the jail term on the grounds that they plan to file an appeal.

At that, Jussie grew even more animated.

Some said it was one of the Empire actor’s best performances. 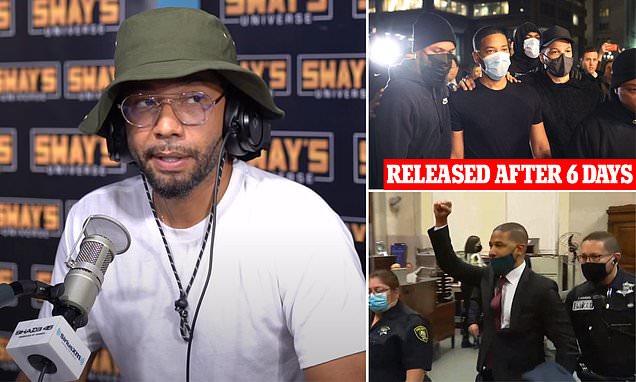 Jussie Smollett insists he did not lie about homophobic attack

Jussie Smollett insists he is not 'a piece of s***', did not lie about homophobic attack, and says he refused to eat during the six and a half days he was in prison because he was 'fasting to gain clarity' Addressing... 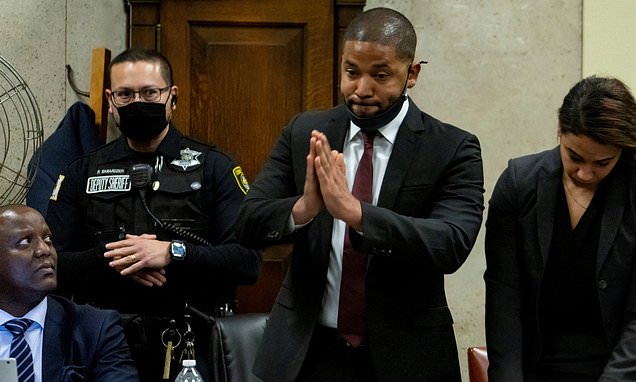 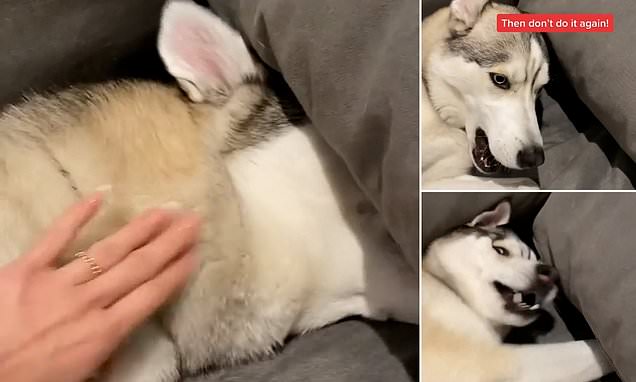 ‘Don’t do it again!’ Jackson the husky throws a very vocal tantrum after his owner leaves him alone for two hoursThe dog, who lives in California, did not deal well with the brief separation Video of the hissy fit wa... 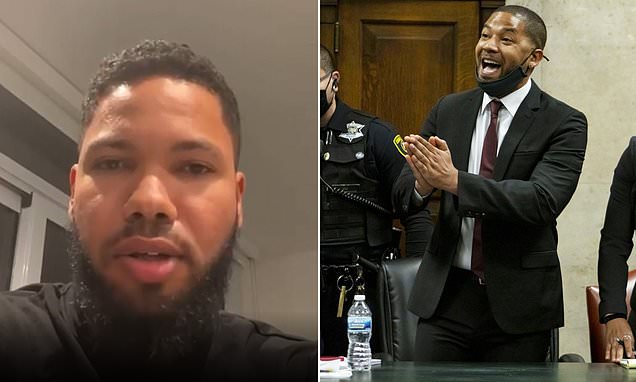 Jussie Smollett is 'placed in Cook County jail psych ward' after court outburst: Brother takes to Instagram to insist the race attack hoaxer is 'in no way, shape, or form at risk of self-harm'Jussie's brother Jocqui ...