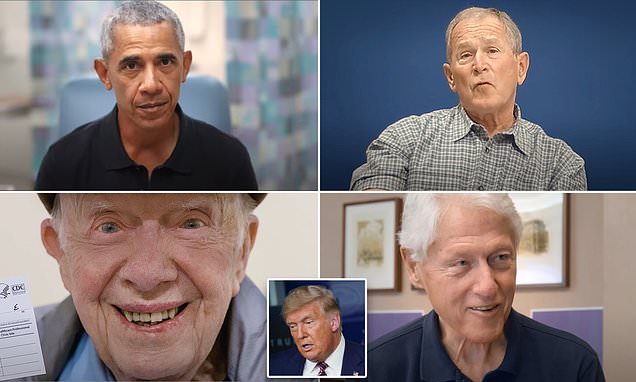 ‘Roll up your sleeves and do your part!’ Former presidents Carter, Clinton, Bush and Obama – but not Trump – join forces in two videos to encourage vaccinations

All the living former presidents except for Donald Trump took part in two public service announcements encouraging Americans to get the COVID vaccine.

In one video, the former first ladies – except for Melania Trump – are also pictured getting their shot.

The one-minute spot shows Jimmy and Rosalynn Carter, Bill and Hillary Clinton, George W. Bush and Laura Bush, and Barack and Michelle Obama with their sleeves rolled up and and a syringe in their arm, receiving the vaccine.

‘In order to get rid of this pandemic, it’s important for our fellow citizens to get vaccinated,’ Bush said.

‘So roll up your sleeve and do your part,’ he adds.

Jimmy Carter, seen with Rosalynn, says he got vaccinated to help end the pandemic ‘as soon as possible’

Bill Clinton, seen with Hillary Clinton, said he’s ready to get back to work


Bush, Clinton and Obama are the only ones who speak in the spot and they all urge Americans to get vaccinated so life can return to normal.

The three also talk about what they want to do once they are vaccinated.

Clinton, 74, says he wants to ‘go back to work’ and ‘to be able to move around.’ Obama, 59,  said he wants to see ‘Michelle’s mom’ and ‘to hug her, and see her on her birthday.’ And Bush, 74,  said he’s looking forward to going to Opening Day in a fully packed Texas Rangers stadium.

Carter, 96, says he got vaccinated to help end the pandemic ‘as soon as possible.’

Clinton, Bush and Obama had said they would get their vaccine publicly in an effort to encourage others to get their shot.

The announcements will air on national and local television stations across the country and on digital and social media platforms.

The second video, which runs about 30 seconds long, features only former Presidents Clinton, Bush and Obama. It was filmed at Arlington National Cemetery on Inauguration Day, when the three were in Washington D.C. to see Joe Biden take the oath of office.

‘The science is clear,’ Bush said. ‘These vaccines will protect you and those you love from this dangerous and deadly disease.’

And Obama calls getting vaccinated ‘the first step to ending the pandemic and moving our country forward.’ 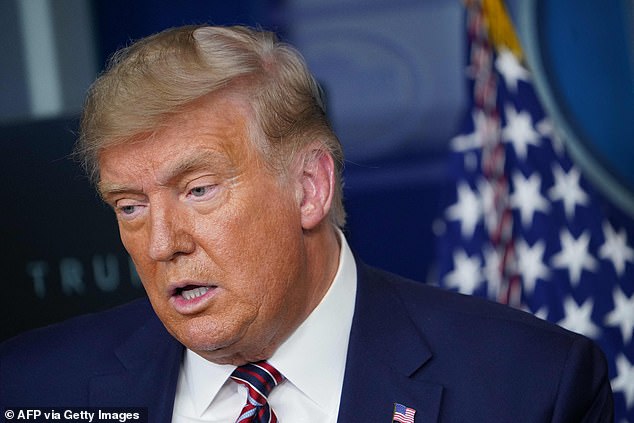 The public service announcements were put together by the Ad Council and the COVID Collaborative. They were not done in conjunction with the Biden administration.

Biden also received his vaccine publicly. And his administration will mark the one-year anniversary of the country beginning its shutdown when the president addresses the nation on Thursday night.

The Clintons, Bushes and Obamas were quietly vaccinated weeks ago. Michelle Obama told People magazine that it meant there was ‘light at the end of the tunnel’ amid the pandemic.

‘I encourage everyone to get a vaccine as soon as they have an opportunity,’ she said.

Donald and Melania Trump got the COVID vaccine in January before they left the White House. It’s unclear why they did not take part in the public service announcements.

Trump told the audience at CPAC earlier this month that ‘everybody’ should get the vaccine.

‘We took care of a lot of people — including, I guess, on Dec. 21, we took care of Joe Biden, because he got his shot, he got his vaccine,’ Trump said in his remarks. ‘So everybody, go get your shot.’

Neither Trump took the vaccine publicly and it’s unclear which vaccine they received.  In October, both Trumps tested positive for the coronavirus and President Trump was hospitalized for a few days at Walter Reed hospital after he had trouble breathing.

The Biden administration is staying mum on whether they would use President Trump as part of a campaign to encourage people to get vaccinated. Many of those who question vaccines are also Trump supporters.

‘Well we’re glad that everybody who has taken the vaccine is talking about it, including him,’ said Senior coronavirus advisor Dr. Andy Slavitt at a COVID briefing last week.

‘We’ll also note that we have governors of both parties who … have taken the vaccine, and who are being very public about it, and others as well. I think many people are, you know, waiting their turn,’ he noted. 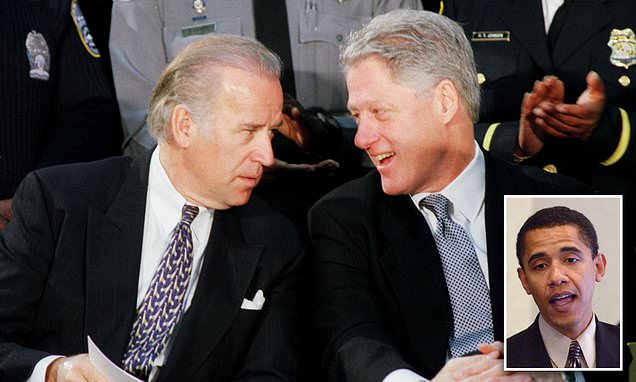 Biden lunches with Bill Clinton after dining with Obama

The next impeachment club? Biden lunches with Bill Clinton – who battled House Republicans to win a second term – just days after dining with ObamaClinton and Bide both spoke at Madeleine Albright's funeral last week... 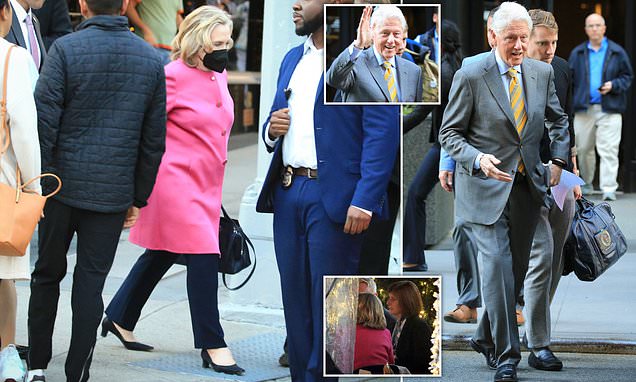 EXCLUSIVE: Back on (social) scene! Hillary and Bill Clinton dine with friends at the ritzy Mark Hotel in Manhattan's Upper East Side - but the former first lady calls it an early night and is spotted leaving aloneHil... 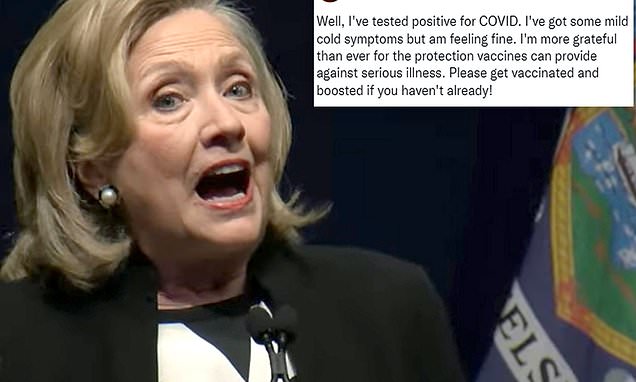 Hillary Clinton reveals she has COVID 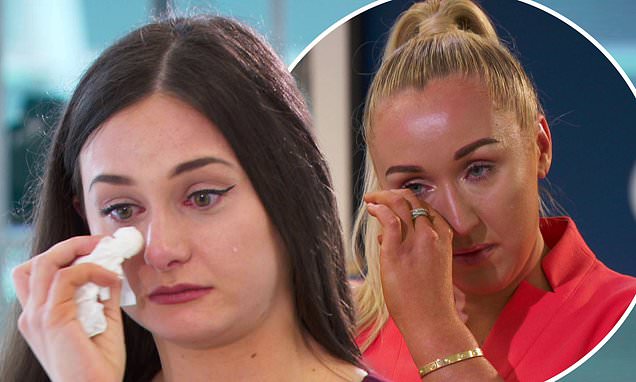