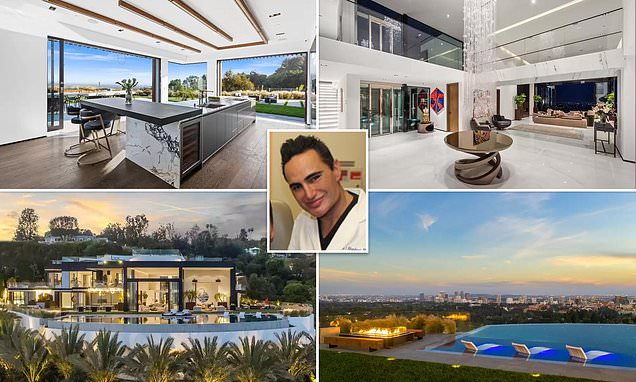 A celebrity plastic surgeon with a history of making homophobic and anti-Semitic statements has filed for bankruptcy after spending more than $46 million developing a mega-mansion in Bel Air, admitting that he ‘dreamed too big.’

Dr. Alex Khadavi, 49, put the hillside mansion with sweeping views of Los Angeles on the market for about $88 million last May, but he hasn’t been able to sell it.

A bankruptcy judge has now decided that she may sell the estate for as little as $50 million at auction – though Khadavi thinks the doomed effort could still net more in the open market, the Wall Street Journal reports.

The 21,000 sq ft home features seven bedrooms, a movie theater, a champagne tasting room, and an NFT art gallery. The floors are even stained with 24-karat gold dust.

He grew agitated during construction, sacking his architect and primary contractor within the first year and complaining about crews who called out sick with COVID.

‘People don’t take pride in what they do. Nobody wants to work these days,’ he said.

Khadavi’s celebrity clients include Khloe Kardashian, Scott Disick, Lance Bass and David Hasselhoff, according to his Instagram, which has 94,000 followers. He is a national trainer for Botox and the filler Juvederm, according to his website.

The troubled surgeon was filmed going on a homophobic rant at his apartment building last year, causing his neighbors, a gay couple, to file a restraining order alleging that he threatened to kill them.

In 2016, real estate agent Matt Altman from Million Dollar Listing also filed a restraining order against Dr. Khadavi after the surgeon allegedly told him he ‘hates all Jews’ and threatened to kill him. 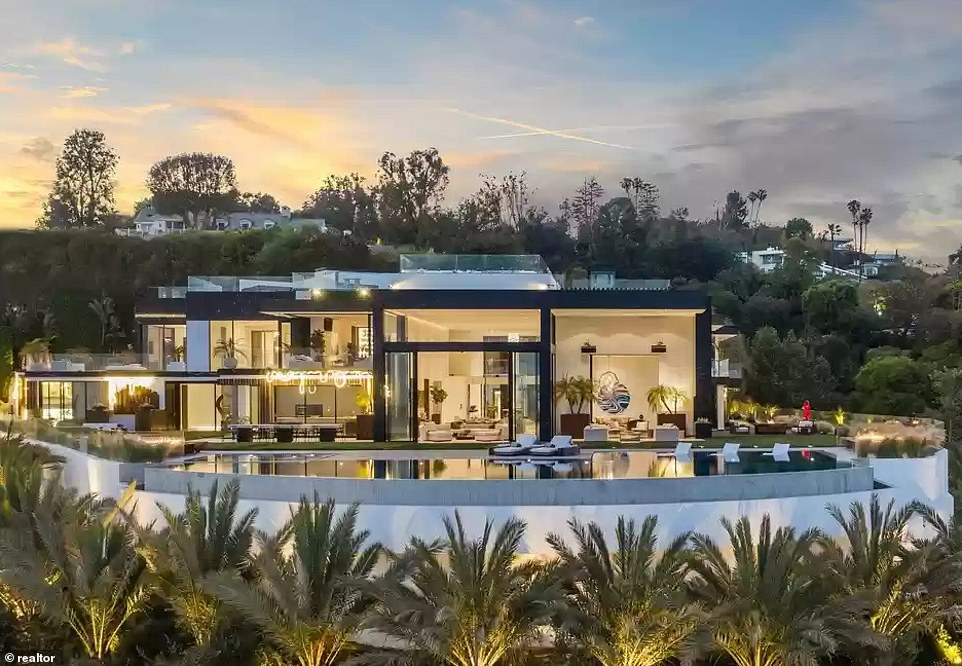 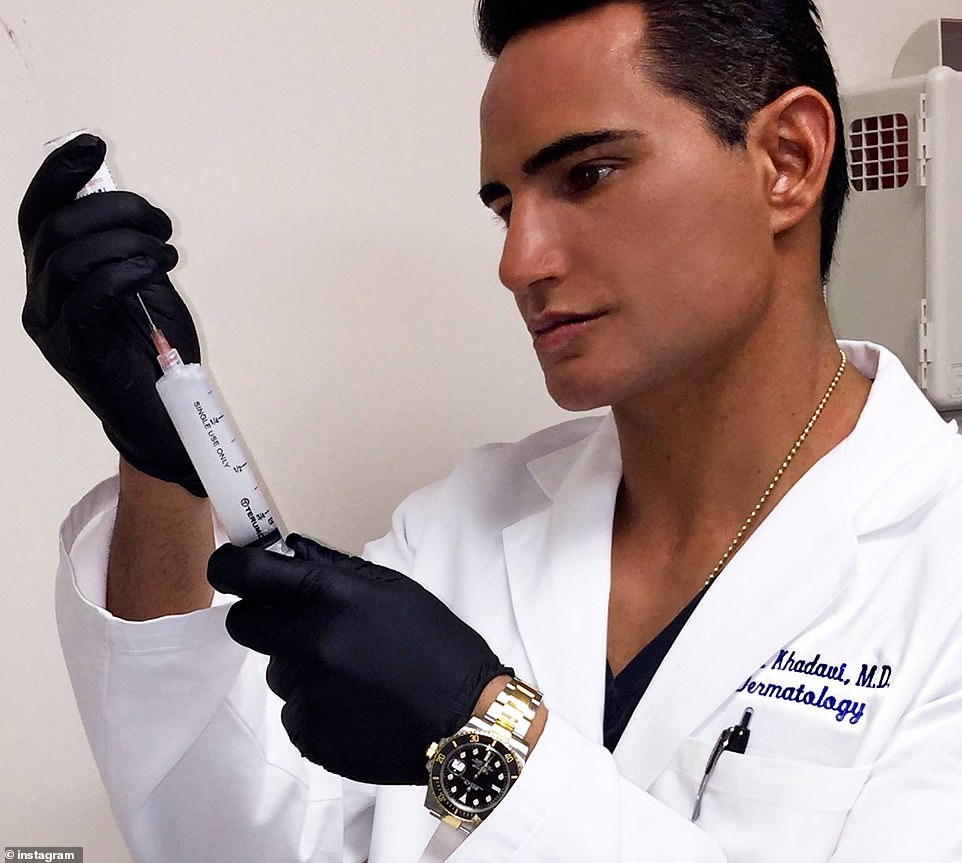 Dr. Alex Khadavi has filed for bankruptcy after spending at least $46 million buying and building out a hillside LA mansion. He put it on the market for $87.777 million last year but hasn’t been able to sell it 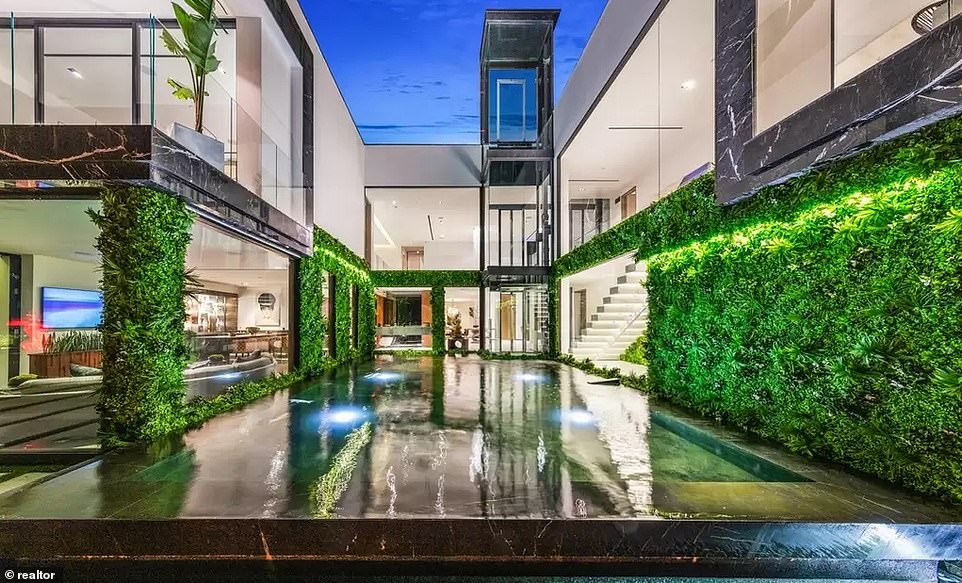 ‘I dreamed too big’: Khadavi, 49, says the price of the home kept ballooning as he built it 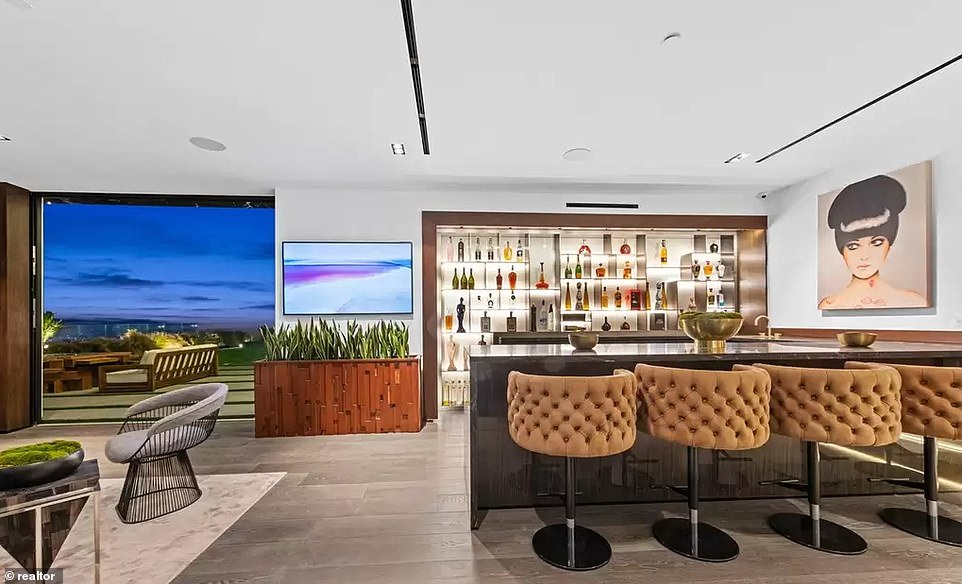 A backlit tequila bar is one of the many extravagant features packed into the costly home. The mansion was built based on some of Khadavi’s favorite mathematical concepts 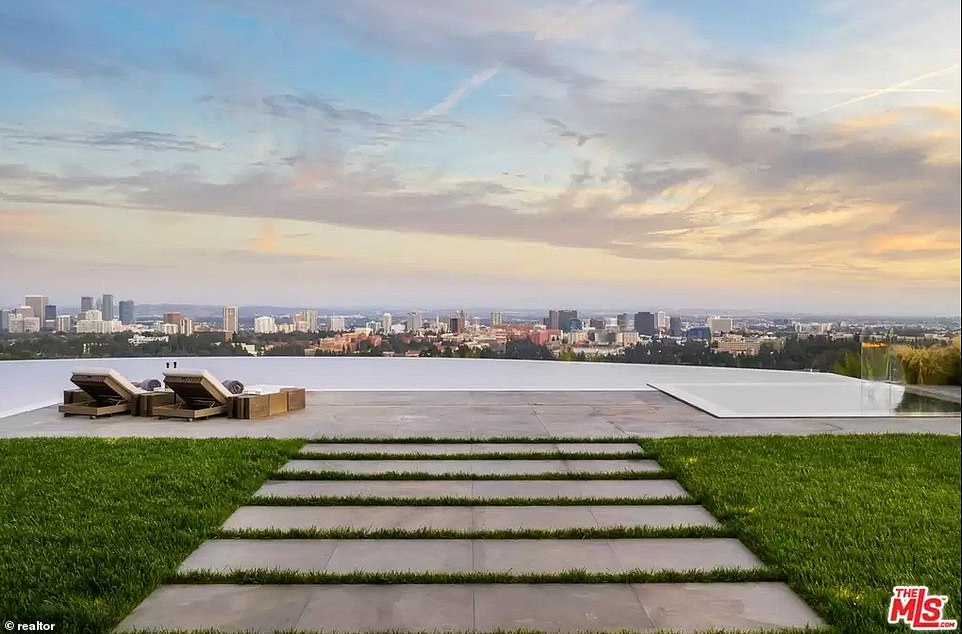 The estate features 360-degree views from the San Gabriel Mountains to the Channel Islands. He bought it for $16 million in 2013 and spent more than $30 million on construction

Khadavi bought the Bell Air mansion for $16 million in 2013. He spent more than $30 million on construction, not including land cost. Among his creditors is Axos Bank, which lent the cosmetic dermatologist $27 million.

He admitted that he didn’t have the right connections for a project this big and that he has mostly flipped homes under $1 million, according to the Wall Street Journal.

His vision for the manse kept expanding during construction – and so did his budget.

‘The marble budget was $10 [per square foot],’ Khadavi said. ‘I clearly made a mistake because we bought $150 [per sq ft] calacatta extra gold. It’s like if you go in to buy a Prius and they show you a Ferrari.’

He wanted to live in the house, but realized he’d have to sell it halfway through building it because it was going to be too expensive to maintain, he said.

‘I dreamed too big.’

During a bankruptcy hearing on March 30, Judge Sheri Bluebond said she could soon agree to sell the home at auction for a minimum ‘reserve price’ of $50 million. 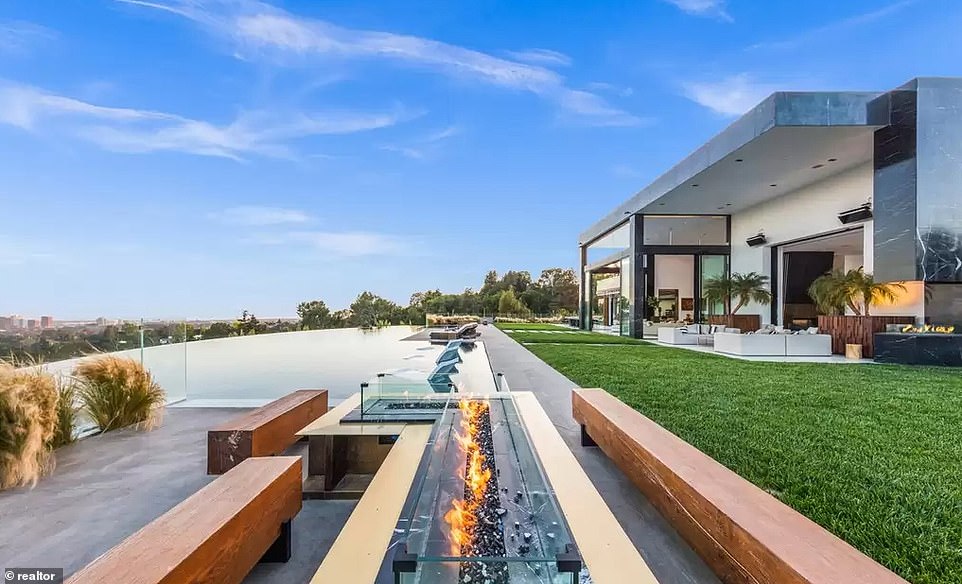 During a bankruptcy hearing on March 30, Judge Sheri Bluebond said she could soon agree to sell the home at auction for a minimum ‘reserve price’ of $50 million 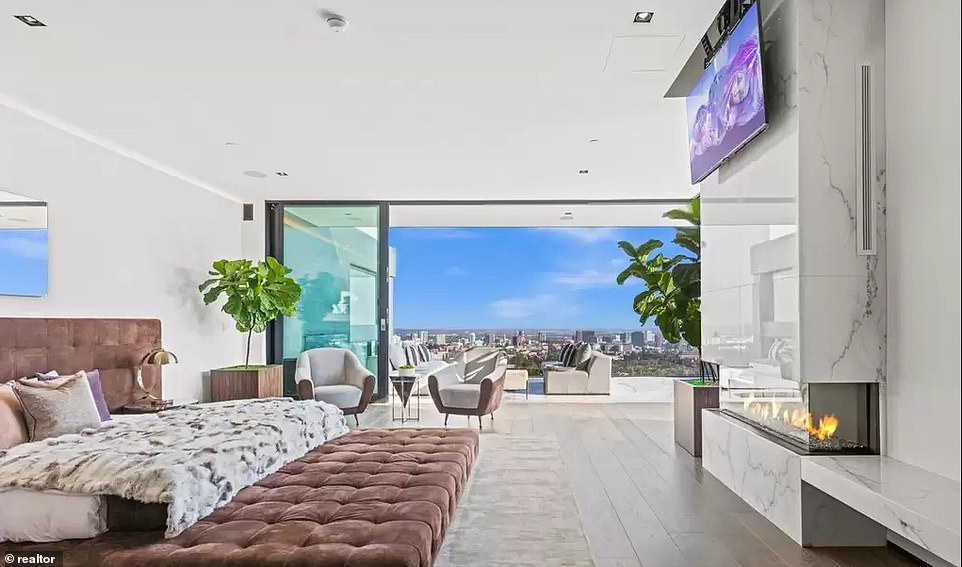 The doctor, 49, wanted to live in the house but realized he’d have to sell it because it was going to be too expensive to maintain 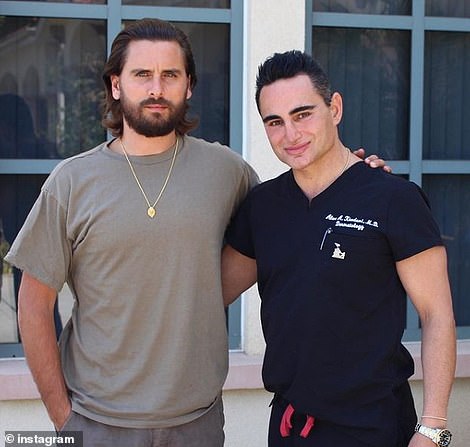 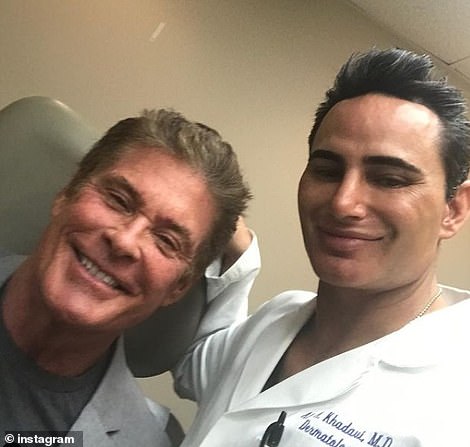 Khadavi’s clients include Scot Disick of Keeping Up with the Kardashians and David Hasselhoff. He has 94,000 followers on Instagram, where he posts himself administering fillers and Botox 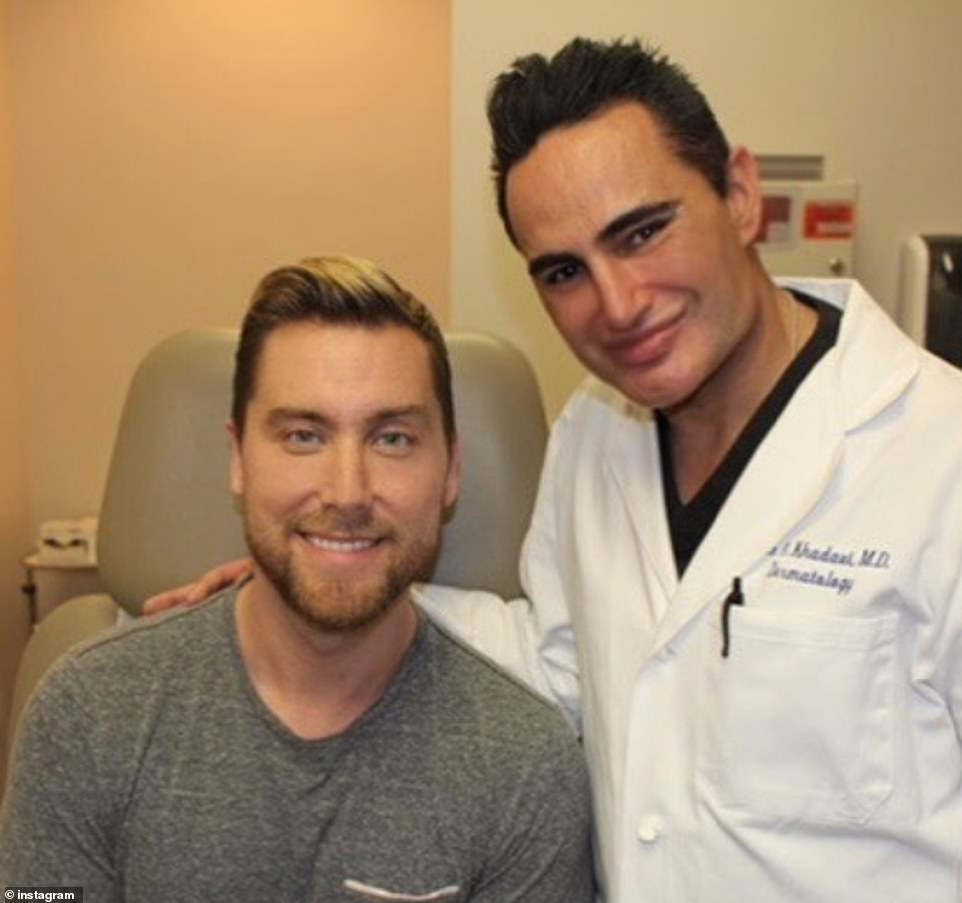 ‘So grateful for this longtime patient of mine’: Khadavi is seen with former NYSNC star Lance Bass in a recent social media snap 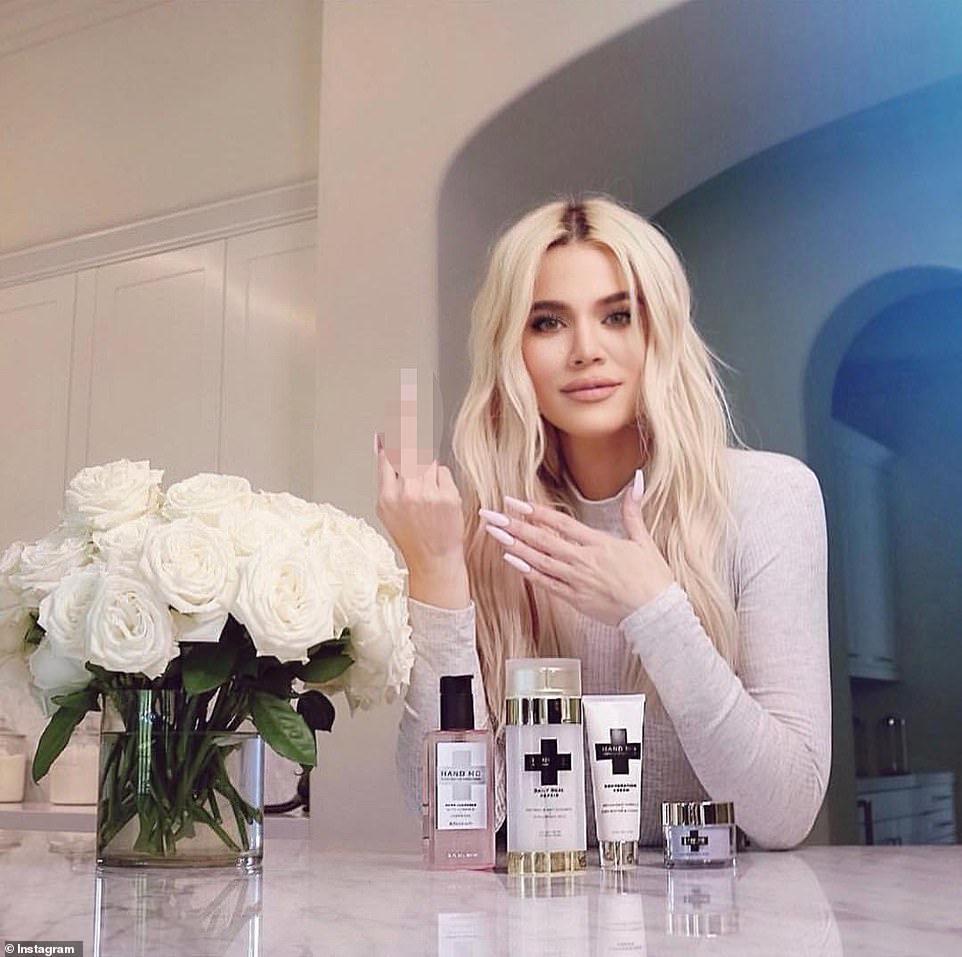 He complained of workers who came down with COVID and found problems with their work.

He had them rip out a beam that was blocking the view from the primary room. He also said he ripped up $1 million worth of marble after they failed to waterproof the guest house correctly.

The home features 360-degree views from the San Gabriel Mountains to the Channel Islands, according to video shot by One Shot Productions.

The extravagant design includes a formal dining room, a movie theater, a car museum, a massage room, a DJ booth, an NFT art gallery, a tequila bar and a champagne tasting room.

A rotatable 3D laser projector on the roof casts a light in the shape of a rhombus over the pool. And jets inside the pool pump water in time with the music. 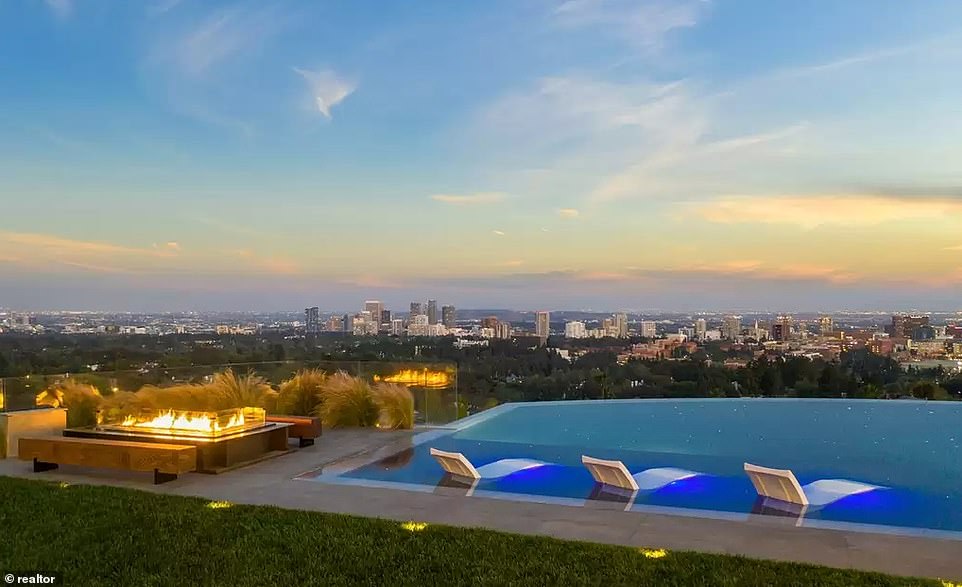 A 3D laser projectors that casts a light in the shape of a rhombus over the pool was inspired by  Disneyland. The jets inside the pool pump water in time with the music 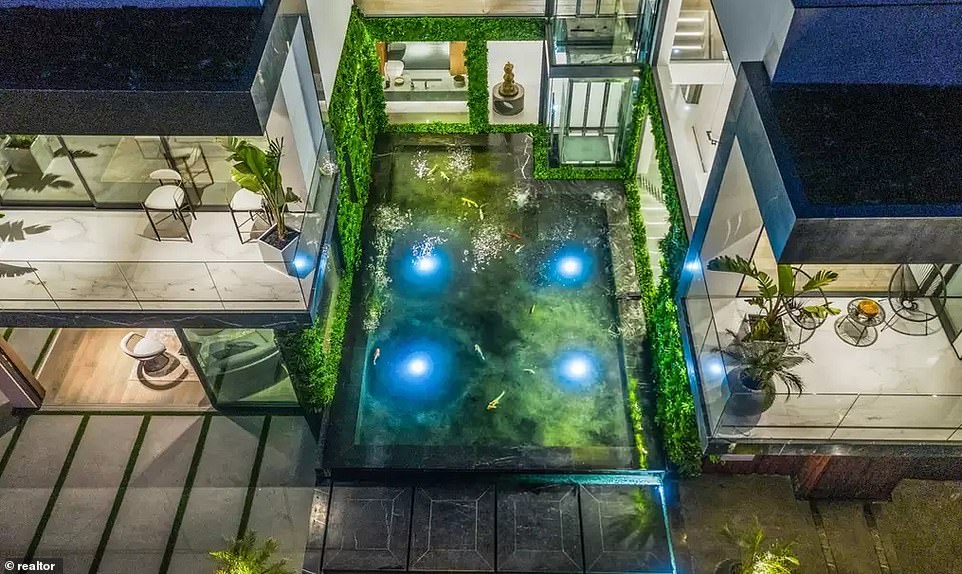 Dr. Khadavi’s notorious temper surfaced during construction as he complained of workers who came down with COVID and found problems with their work 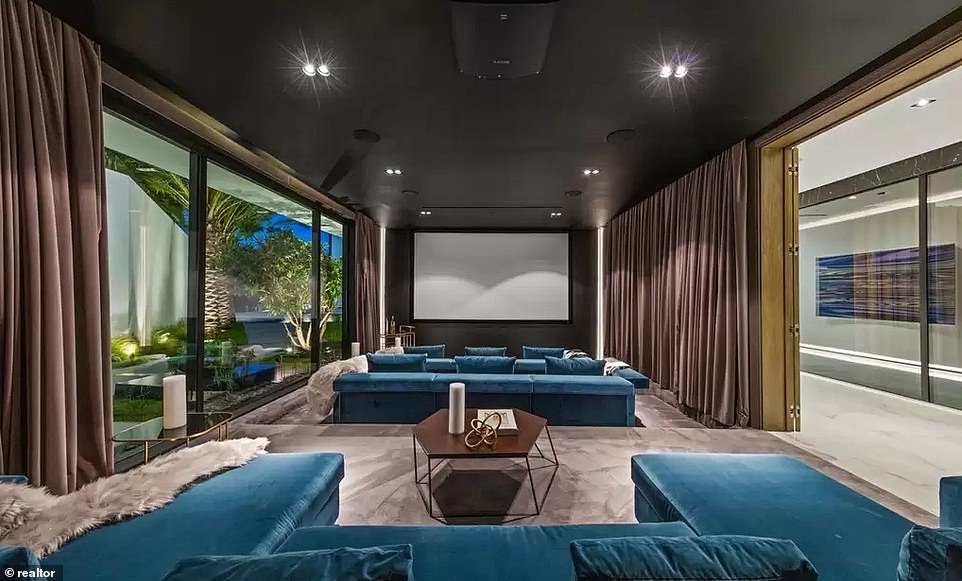 ‘People don’t take pride in what they do. Nobody wants to work these days,’ he said of his contractors. Above, a movie theater inside the mansion 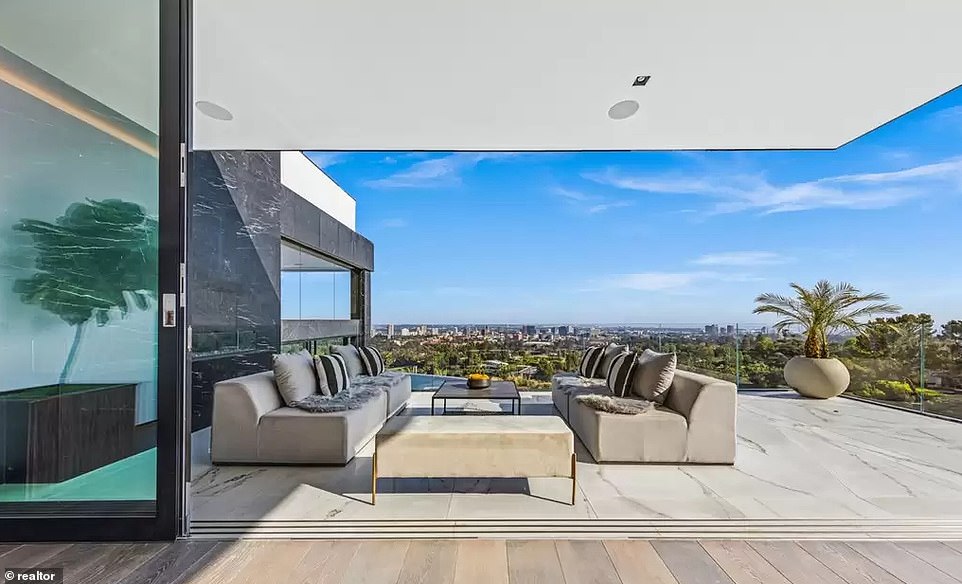 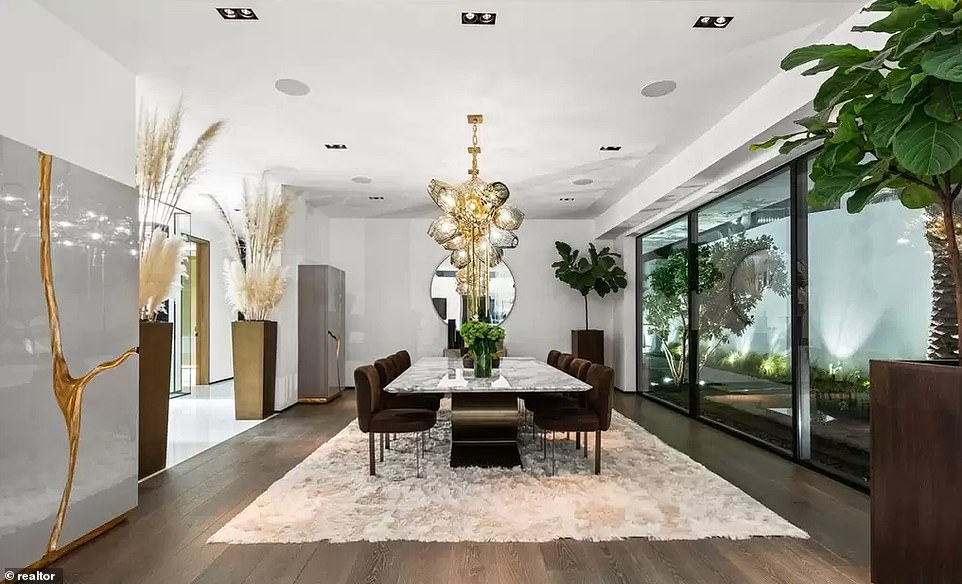 The British-born Iranian doctor says he was inspired by mathematical concepts like the ‘golden ratio’ and the Fibonacci sequence, considered by some to represent the apex of human beauty 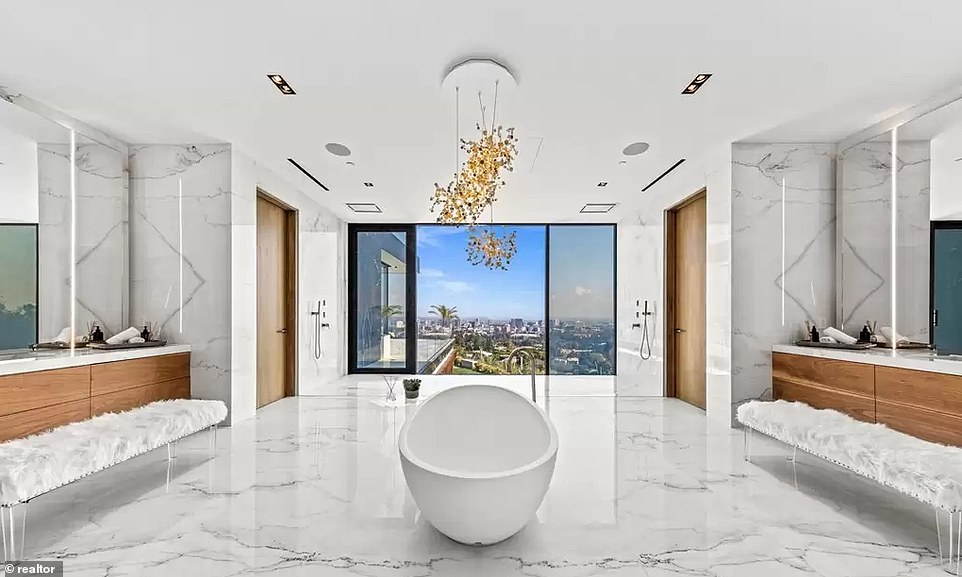 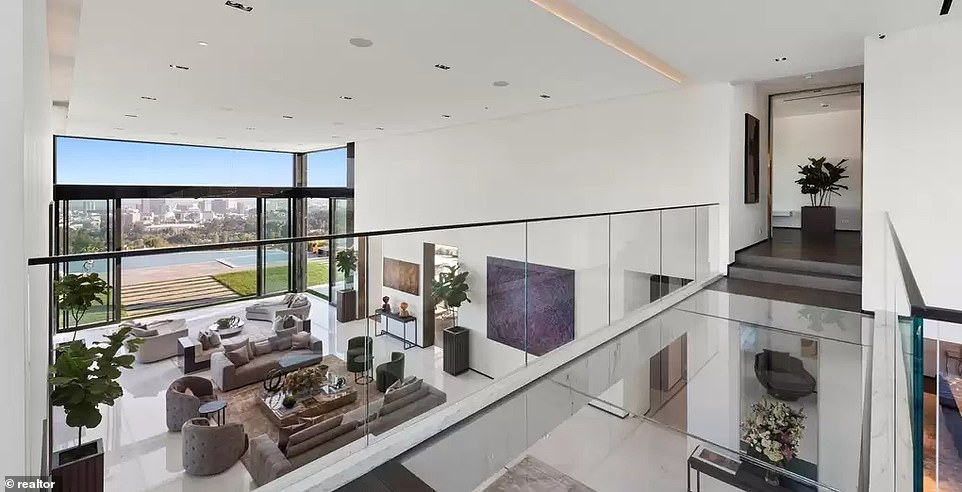 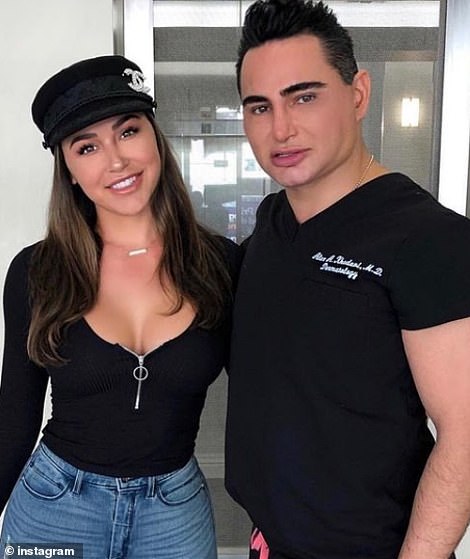 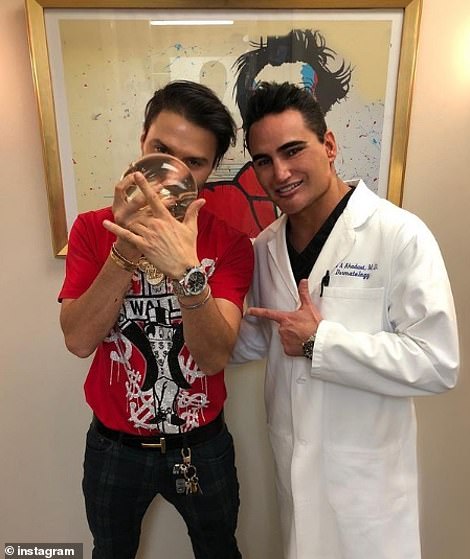 Khadavi with model Ana Cheri (left) and Alec Monopoly, a street artist known for covering his face or using a face mask to hide his identity (right)

A glass-bottomed bridge connects different parts of the house and overlooks the living area.

The British-born Iranian doctor says he was inspired by mathematical concepts like the ‘golden ratio’ and the Fibonacci sequence, considered by some to represent the apex of human beauty.

Khadavi finally put the home on the market in May 2021 for $87.777 million, with the sevens being a reference to his favorite number and his age when he and his family relocated to the US from Iran during the Iranian Revolution.

He still believes the house is worth more than the $50 million price tag that a judge could set for it at auction. ‘The view itself is honestly worth about $100 million,’ he told the Wall Street Journal.

The doctor has dermatology practices in Encino, a LA neighborhood, and Thousand Oaks in nearby Ventura County.

Last July, Khadavi was recorded on surveillance video threatening the man in the lobby of their plush West Hollywood condo complex on July 7.

‘I’ll  shoot you, I don’t give a f**k… Nobody tells me what to do,’ he continues as a concierge looks on helplessly.

The foul-mouthed tirade goes on for more than a minute before the man taunts: ‘I’ll shoot you in the f**king face, f**king f****t!’

The neighbor then filed a restraining order against Khadavi, saying he ‘fears for his life’ and that the dermatologist had told the concierge he was going to kill him and his husband.

The concierge allegedly claims that Khadavi ‘showed him a handgun he was carrying [while leaving the condo complex]’ around two months before.

The Medical Board of California said they were investigating the incident.

Back in 2016, real estate agent Matt Altman obtained a restraining order against Khadavi for making ‘anti-Semitic death threats’ and threatening him in person and over the phone. 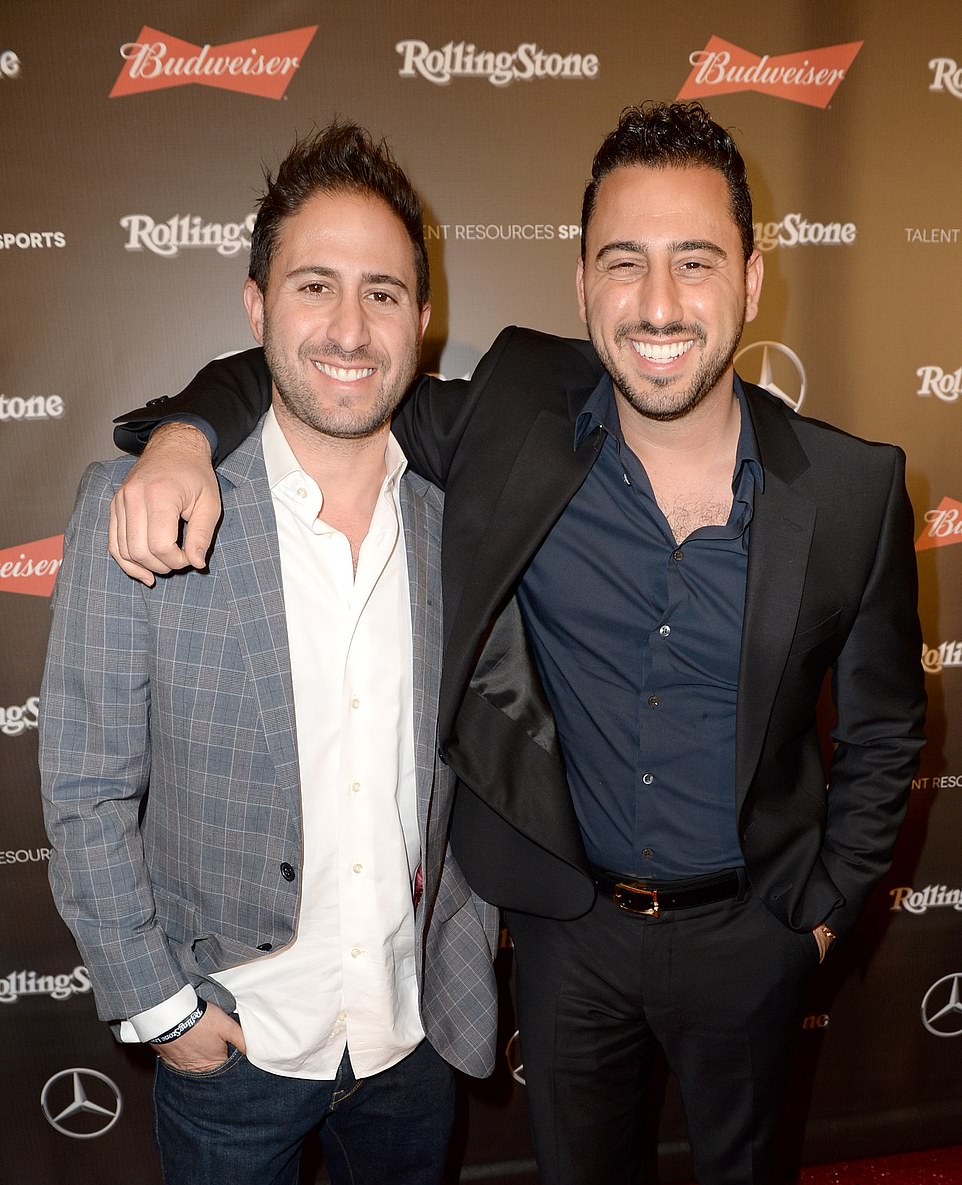 Altman claimed in documents, seen by TMZ at the time, that Khadavi approached him at a real estate event.

When Altman asked him to leave because it was a private event, Khadavi allegedly told him he ‘hated all Jews’ and threatened to kill him.

The documents also claimed Altman had been receiving racist and homophobic phone calls from Khadavi for years.

The dermatologist denied the allegations at the time with a rep telling TMZ he is Jewish and had been invited as a guest to the event.

The restraining order said the doctor had to stay 100 yards away from Altman and his girlfriend and his brother and Million Dollar co-star Josh Altman and his wife.