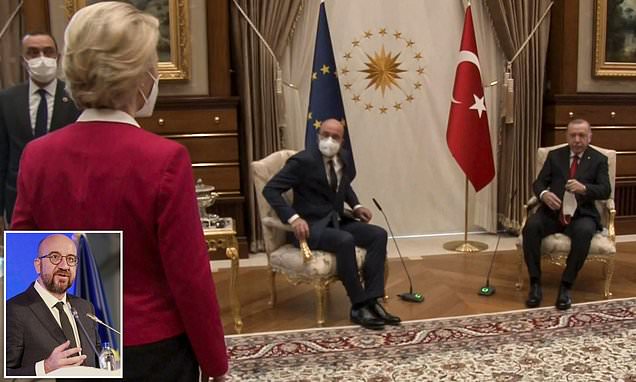 European Council President Charles Michel said he can’t sleep at night because of a humiliating seating gaffe that relegated the female EU commissioner to a sofa during a meeting on women’s rights.

Ursula Von der Leyen, the first female president of the European Commission, expressed surprise and raised a hand in disbelief when she found Michel had taken the only chair available next to Turkish President Tayyip Erdogan at the talks. 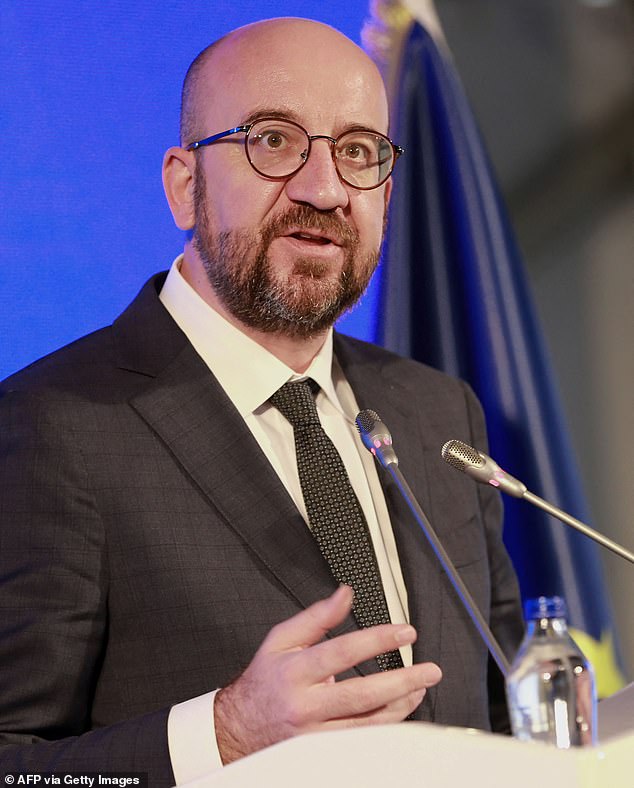 Mr Michel said late on Wednesday that the embarrassment was the result of the ‘strict interpretation’ by Turkish services of protocol rules, and he regretted ‘the differentiated, even diminished, treatment of the president of the European Commission’

‘I make no secret of the fact that I haven’t slept well at night since because the scenes keep replaying in my head,’ Michel told German newspaper Handelsblatt, adding if it were possible he would go back and fix it.

Turkey strongly rejected accusations that it snubbed von der Leyen because of her gender, while European Council chief Charles Michel blamed Turkey – despite the fact he did not appear to offer his colleague his seat either.

The incident took place in Ankara on Tuesday as Von der Leyen met with Erdogan, alongside her European colleague Michel.

Video showed how Von der Leyen was left standing to one side and uttered an audible ‘ahem’ as Michel and Erdogan took the only two available seats – with neither offering her their chair even after she protested.

She was instead left to perch on a nearby sofa, positioned a distance from the two men, as they held the lengthy talks on Turkey’s relations with the EU, including Erdogan’s decision to withdraw from a treaty protecting women’s rights.

The images drew intense criticism on social media and accusations of gender discrimination with a ‘sofagate’ hashtag trending. It was quickly pointed out that in previous meetings in Turkey when both EU representatives were male, both were offered seats. 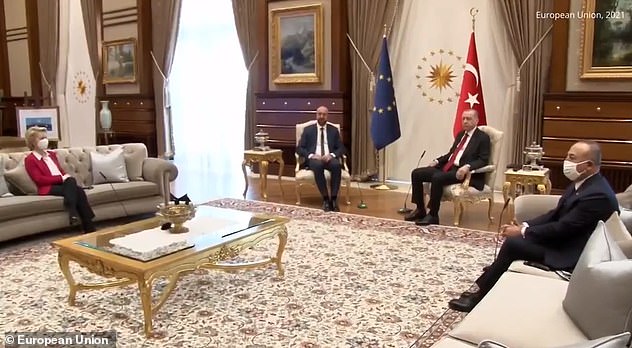 Von der Leyen, who could be heard uttering an irritated ‘ahem’ as the men sat down, was left to perch on a nearby sofa during two and a half hours of diplomatic talks 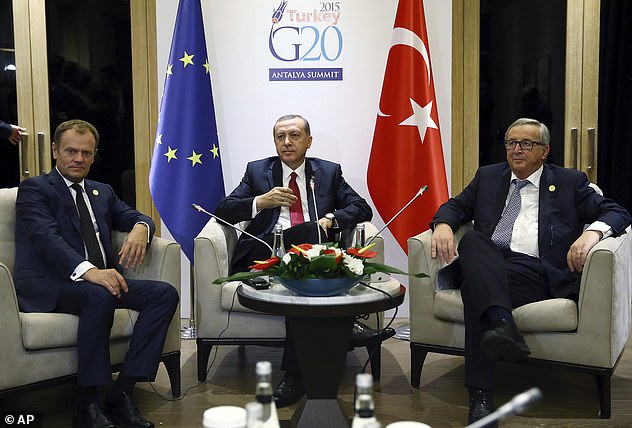 It was pointed out that in previous meetings in Turkey when both EU representatives were male, both were offered seats. 사진: Turkey’s President Recep Tayyip Erdogan, 센터, sits together as he holds a meeting with then EU Commission President Jean-Claude Juncker, right and then EU Council President Donald Tusk, 왼쪽, 월요일, 십일월 16, 2015 (파일 사진) 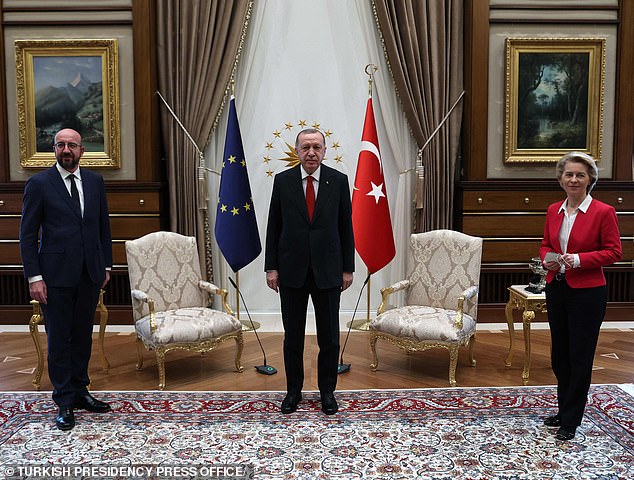 Anakara insisted that the EU’s own protocol requests were applied during the meeting at the Turkish presidential palace.

But Mr Michel said late on Wednesday that the embarrassment was the result of the ‘strict interpretation’ by Turkish services of protocol rules, and he regretted ‘the differentiated, even diminished, treatment of the president of the European Commission’.

Von der Leyen’s spokesman said afterwards that Turkey had breached protocol by failing to offer her a chair, as it has done to other male commission presidents in the past, but that she decided to ‘prioritize substance over protocol’ by staying.

그러나, the spokesman added, ‘let me stress that the president expects that the institution that she represents to be treated with the required protocol, and she has therefore asked her team to take all appropriate contacts in order to ensure that such an incident does not occur in the future.’

Diplomatic protocol dictates that the EU commission president and council president, holding equal rank, should be seated in an equal manner.