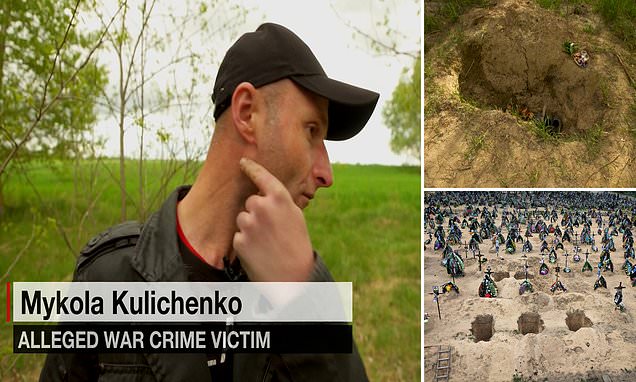 The man Russia could not kill: Civilian who was shot in the face and buried alive with the corpses of his executed brothers after three days of torture reveals how he dug his way free

A Ukrainian man who was supposedly shot in the face and buried along with his two dead brothers in a shallow grave by Russian forces has miraculously survived to tell of his harrowing ordeal.

Mykola Kulichenko claimed he was hauled out of his house in the village of Dovzhyk, close to the north eastern city of Chernihiv, by Putin‘s forces on March 18, just two weeks before the Russian army retreated from the region.

All three siblings underwent three days of brutal interrogation which included regular beatings and being kept in a basement for three days, amid suspicion they had been involved in the bombing of a Russian convoy.

But on the fourth day of interrogation, their captors decided enough was enough.

The Kulichenkos were bound, blindfolded and bundled into the back of a military vehicle which ferried them to a secluded spot in a nearby wood.

Mykola told CNN how he was forced to kneel and wait as a shallow grave was dug, before his older brother Dmytro and younger brother Yevhen were executed mere metres away from him.

Moments later, a Russian soldier allegedly shot Mykola in the face too – but the bullet entered through his cheek and exited behind his hear, fortunately missing any vital arteries and organs.

The trio were thrown into the pit and lightly covered in dirt after Mykola played dead – but he later managed to wriggle free and avoid a slow, painful death from asphyxiation.

‘I was lucky… and now I have to just go on living,’ the lone survivor said.

‘This story needs to be heard by everyone, not just in Ukraine, but around the world because these kind of things are happening and this is just one in a billion.’ 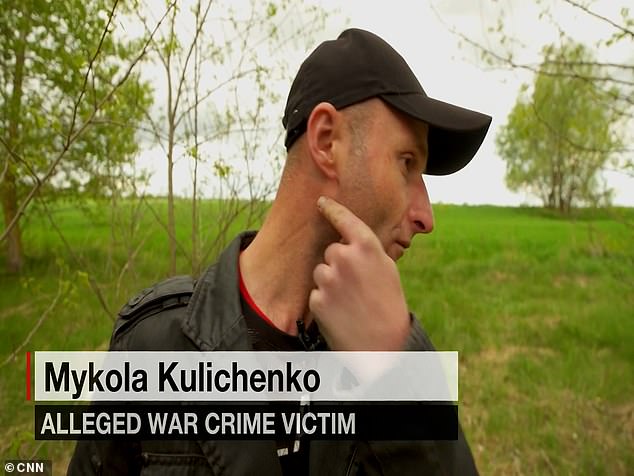 Mykola told CNN how he was forced to kneel and wait as a shallow grave was dug, before his older brother Dmytro and younger brother Yevhen were executed mere metres away from him. Moments later, a Russian soldier allegedly shot Mykola in the face too – but the bullet entered through his cheek and exited behind his hear, fortunately missing any vital arteries and organs 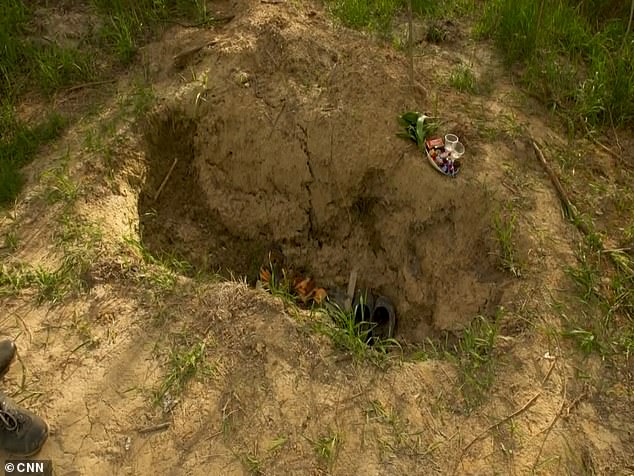 A view of the shallow grave where Mykola and his brothers were tossed by Russian forces after they were shot. His brothers were killed instantly but Mykola survived and later managed to escape

The Russians descended upon the small wooden house shared by the three brothers and their sister Iryna after one of their convoys in the area had been bombed.

Suspecting the brothers may have had something to do with it, Putin’s troops ordered the men outside and forced them to kneel at gunpoint while they ransacked the home searching for any indications of military involvement.

None of the brothers had a hand in the bombing, but a military medal belonging to their grandfather was all the evidence the invaders needed to implicate them.

It wasn’t until five days later that Mykola, sporting bullet wounds and covered in dirt and blood, arrived back at the house, where sister Iryna was waiting anxiously.

‘I came home and there was Mykola. I looked at his eyes and asked where are the others? He said there are no others,’ Iryna, who was out when the Russians kidnapped her brothers, recounted through tears.

Mykola explained he was tossed into the pit before his older brother Dmytro, and was partially stuck underneath his corpse when the Russians covered their bodies with earth.

But he continued to struggle until he was able to gain some purchase, pushing off his dead brother and emerging from the shallow grave brutalised but alive.

His brothers were finally given a proper funeral in April after the Russians had retreated – one month to the day following their execution.

The Chernihiv regional prosecutor’s office has opened an investigation into the incident – one of more than 11,000 recorded incidents of alleged war crimes in Ukraine after less than three months of war.

The horrors of mass civilian torture and slaughter were revealed in early April, when Ukrainian authorities returned to regions north of Kyiv which had been under Russian occupation since late February.

Facing heavy casualties, Putin’s soldiers were ordered to withdraw from northern Ukraine in late March to regroup and redeploy to the eastern Donbas region, where fighting continues to rage as Ukraine looks to repel an all-out assault designed to seize territory there.

But upon their return to towns and villages north of Kyiv and near Chernihiv, Ukrainian officials began to uncover the true extent of the occupiers’ crimes.

The office of the Ukrainian prosecutor general, Iryna Venediktova, has opened a torrent of investigations into allegations of rape, torture and summary execution of unarmed and defenceless civilians. 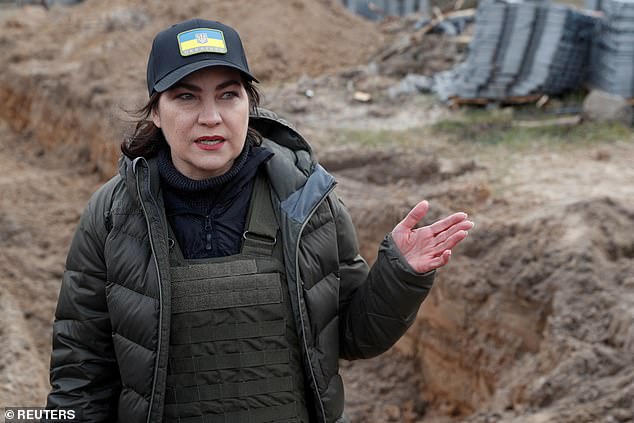 Ukraine’s Prosecutor General Iryna Venediktova speaks to the media next to a mass grave in the town of Bucha, in Kyiv region, Ukraine April 12, 2022 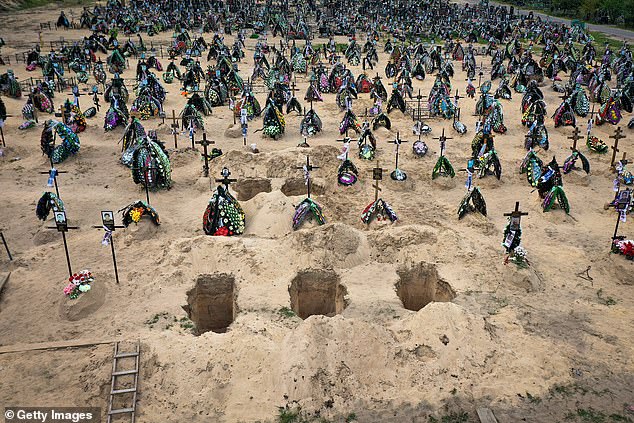 The horrors of mass civilian torture and slaughter were revealed in early April, when Ukrainian authorities returned to regions north of Kyiv which had been under Russian occupation since late February (lines of fresh graves are pictured in Irpin) 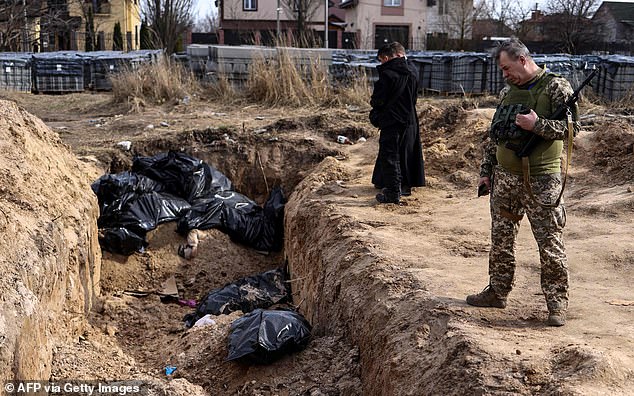 More than 11,000 alleged war crimes in Ukraine have been recorded after less than three months of war (Ukranian soldier looks at body bags as priests pray at a mass grave in the grounds surrounding St Andrew’s Church in Bucha, April 7)

Countless more accounts of war crimes are likely to come flooding out of Mariupol in future – the port city has been under near constant bombardment from Russian forces and more than 20,000 civilians are believed to have been slaughtered, according to mayor Vadym Boichenko.

The gruesome ordeal endured by the Kulichenko family was brought to light as authorities identified a young Russian soldier responsible for the rape of a young Ukrainian girl.

Youthful-looking soldier Bulat Lenarovich Fassakhov, 21, from the Republic of Tatarstan in Central Russia, stands accused of being part of gang of invaders who committed war crimes in the region around Kyiv.

In sickening details published by the Security Service of Ukraine (SBU), Fassakhov is alleged to have broken into the home of a family near Kyiv.

He rounded up the family by threatening to shoot them and herded them into the basement where he locked them in, apart from a young girl.

Fassakhov raped the young girl and was then joined in the atrocity by three more Russian soldiers. 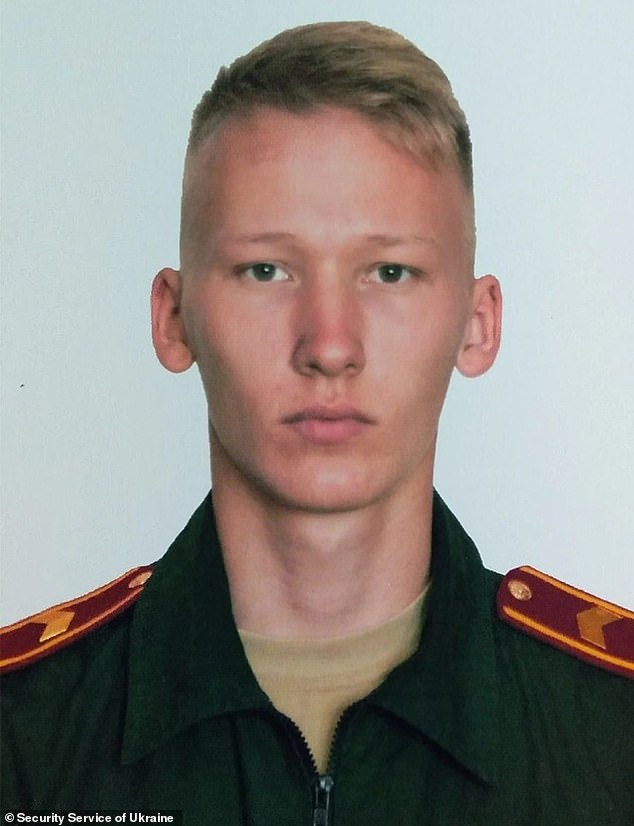 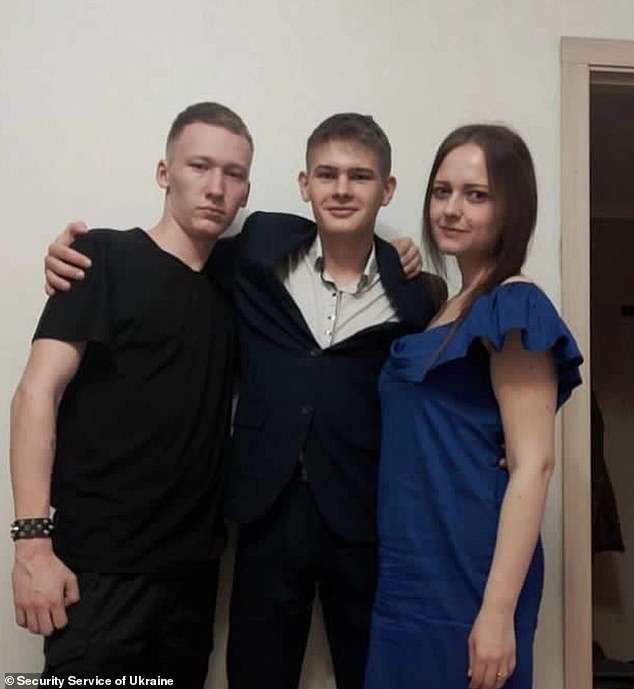 Fassakhov poses with two other youths around his own age, thought to be friends. He is accused of gang raping a young girl with three accomplices 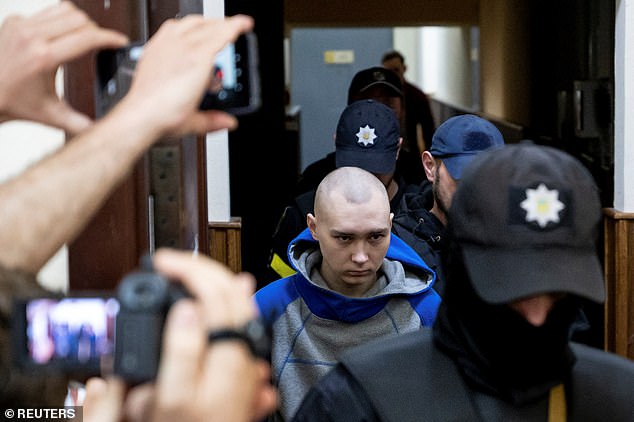 Russian soldier Vadim Shishimarin, 21, suspected of violations of the laws and norms of war, arrives for a court hearing, amid Russia’s invasion of Ukraine, in Kyiv, Ukraine May 13, 2022 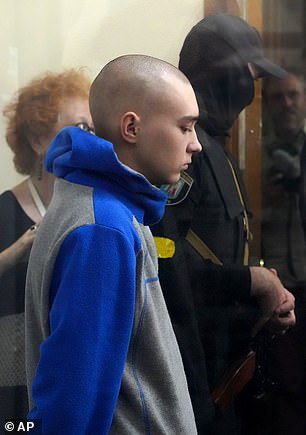 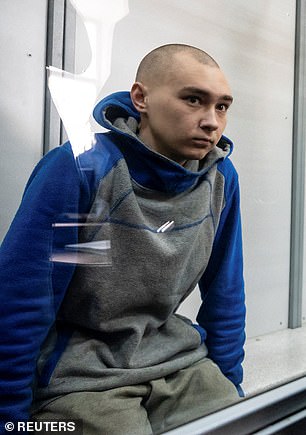 Investigations carried out by the Security Service of Ukraine identified the young man as serving in the 30th separate motor-shooting brigade of the 2nd Guard General Military Army of the Central Military District of the Russian Federation.

They say that witnesses confirmed him as the perpetrator of a number of war crimes against civilians while his battalion occupied towns and villages surrounding Kyiv.

The whereabouts of Fassakhov at present are unknown, but it is likely he has been reposition to fighting in the Donbas, where intense battles rage.

Investigations by the SBU claim to have identified 1,140 Russian soldiers so far who have committed unspeakable atrocities against Ukrainian civilians.

Ukrainian authorities are conducting at least ten active rape investigations involving Russian forces during their occupations of towns and villages in Ukraine, with many more in the pipeline, including alleged rapes of children and men.

Meanwhile, Russian tankist Sergeant Vadim Shyshimarin became the first to go on trial for war crimes in Ukraine last week after he allegedly executed an unarmed 62-year-old man by shooting him in the head.

The trial of 21-year-old marks the first time a member of the Russian military has been prosecuted for a war crime during the conflict.

Shyshimarin, a captured member of a tank unit, allegedly shot the man through an open car window in the northeastern village of Chupakhivka in the first week of war.

My dad Dennis Waterman, Rula Lenska and the rows that ruined my childhood: Julia grew up caught in the crossfire of TV's most volatile marriage. Now, she reveals the tumult she endured and longed-for reconciliation b... 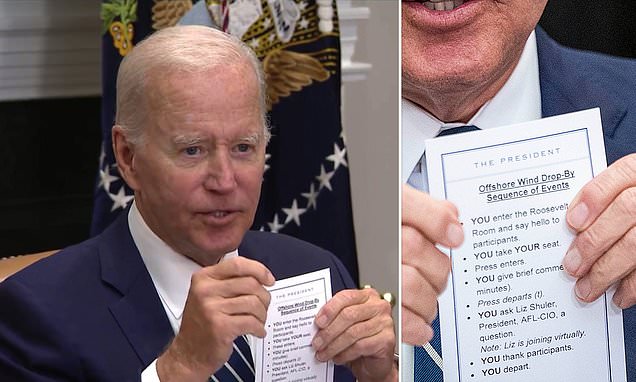 Joe Biden accidentally reveals cheat sheet reminding him to 'take YOUR seat', 'YOU give brief comments (2 minutes)' and 'YOU depart' at meeting with wind-industry executivesThe President mistakenly showed photographe...