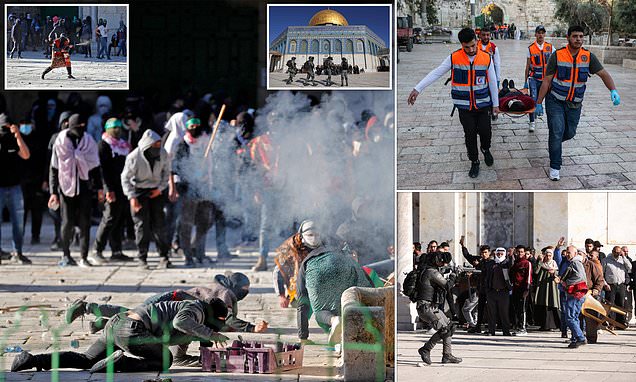 According to Israeli authorities, ‘dozens of masked men’ marched into the Al-Aqsa mosque compound before dawn carrying Palestinian and Hamas flags, chanting and setting off fireworks.

In response, Israeli forces entered the mosque compound where thousands of Muslims were gathered to perform prayers during the holy month of Ramadan.

Palestinian protesters then threw stones and fireworks at Israeli security forces, who returned fire with rubber-coated bullets and tear gas on the sprawling esplanade surrounding the mosque.

It also comes at a time of heightened tensions when the Islamic holy month of Ramadan overlaps with the Jewish holiday of Passover. 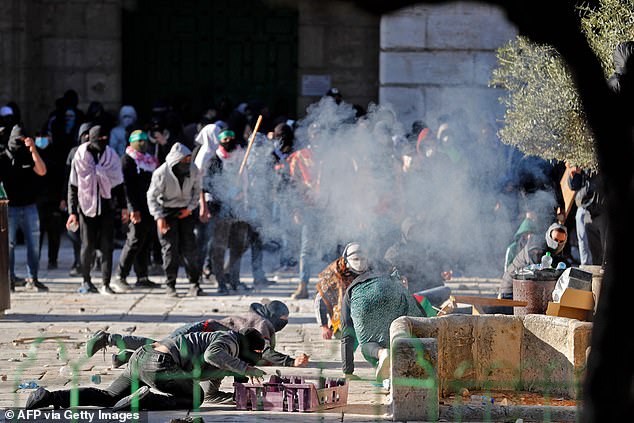 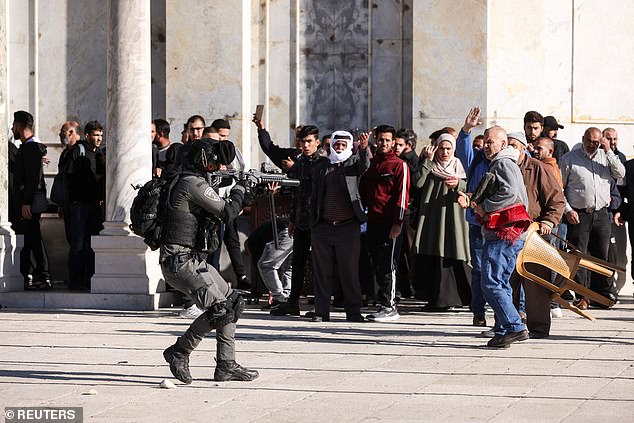 An Israeli security forces member moves in position during clashes with Palestinian protestors at the compound that houses Al-Aqsa Mosque. Crowds reportedly hurled stones towards the Western Wall – considered the holiest site where Jews can pray. 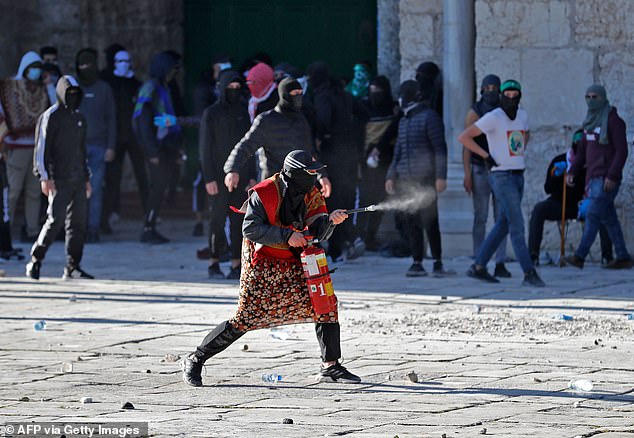 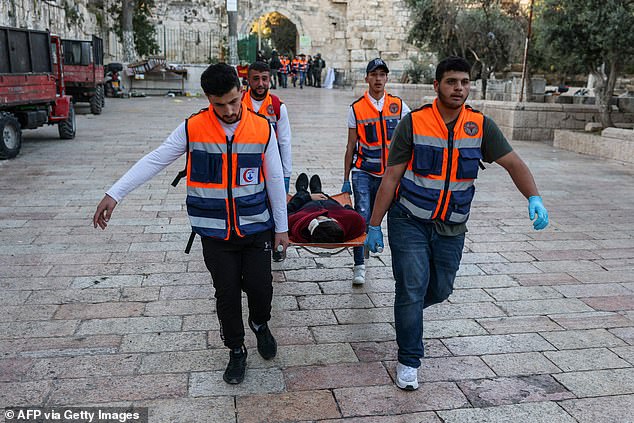 A man is carried on a stretcher after Palestinian demonstrators and Israeli police clashed at Jerusalem’s Al-Aqsa mosque. Sixty seven people rushed to hospital, according to Palestinian Red Crescent 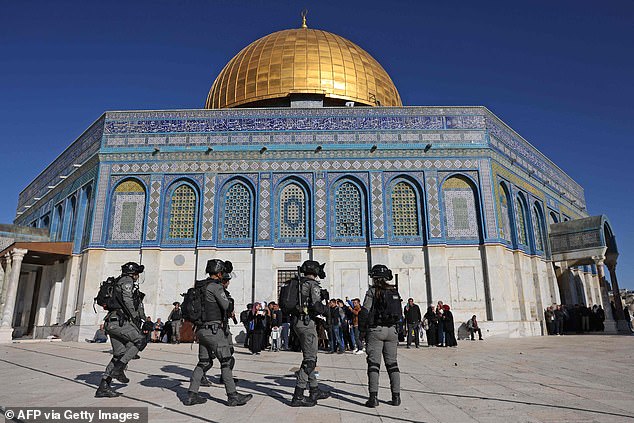 Palestinians are kept at bay by Israeli police during clashes at Jerusalem’s Al-Aqsa mosque compound. 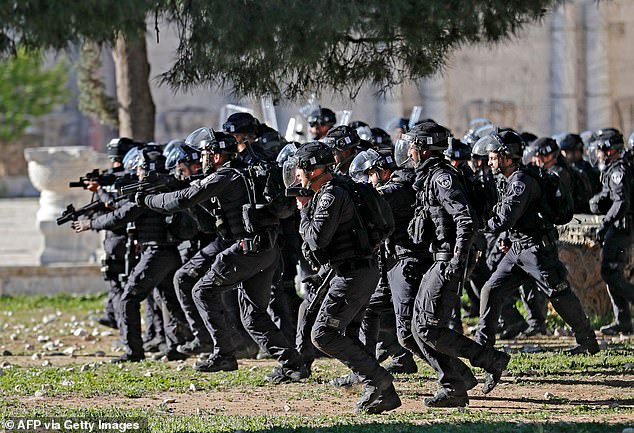 Palestinian protesters then threw stones and fireworks at Israeli security forces, who returned fire with rubber-coated bullets and tear gas on the sprawling esplanade surrounding the mosque


Others showed worshippers barricading themselves inside the mosque itself amid what appeared to be clouds of tear gas.

The Palestinian Red Crescent emergency service said it evacuated 67 people to hospitals who had been wounded by rubber-coated bullets or stun grenades, or beaten with batons.

The Israeli police said three officers were wounded from ‘massive stone-throwing,’ with two evacuated from the scene for treatment.

An announcement made by the Israeli Foreign ministry said dozens of masked men carrying Palestinian and Hamas flags marched to the compound early Friday and gathered stones.

‘Police were forced to enter the grounds to disperse the crowd and remove the stones and rocks, in order to prevent further violence,’ it tweeted.

The police said they waited until prayers were over and the crowds started to disperse. In a statement, it said crowds started hurling rocks in the direction of the Western Wall, a nearby Jewish holy site, forcing them to act.

Israel’s national security minister, Omer Barlev, who oversees the police force, said Israel had ‘no interest’ in violence at the holy site but that police were forced to confront ‘violent elements’ that confronted them with stones and metal bars. 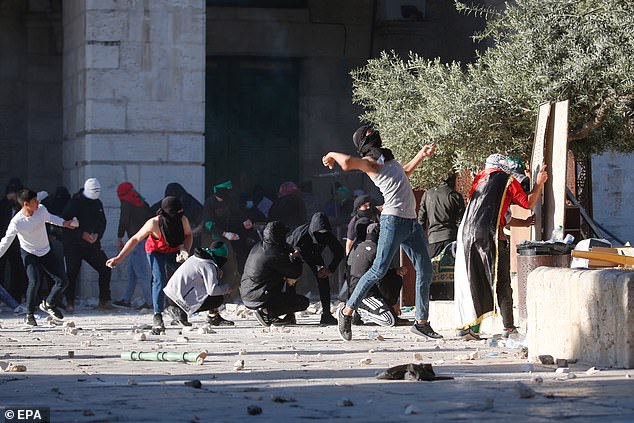 The violence took place at Temple Mount, the holiest site in Judaism, which is also home to the Al-Aqsa mosque, the third holiest site in Islam. It also comes at a time of heightened tensions when Ramadan overlaps with the Jewish holiday of Passover 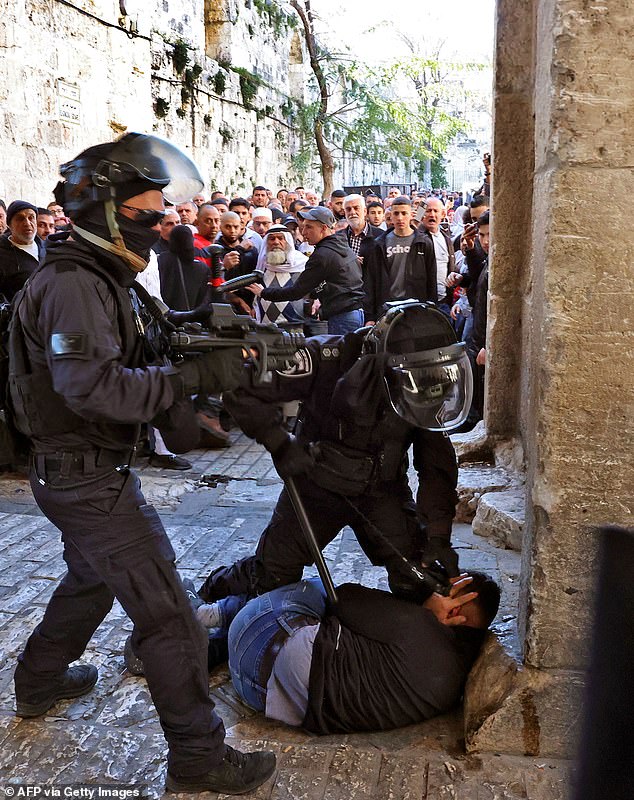 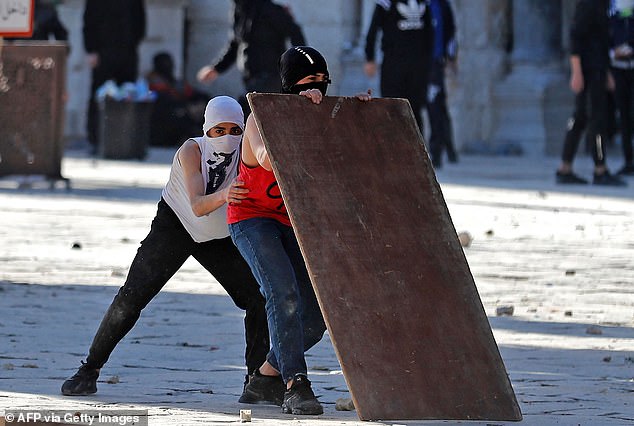 Witnesses said that Palestinian protestors threw stones at Israeli security forces, who fired rubber bullets at some of the demonstrators 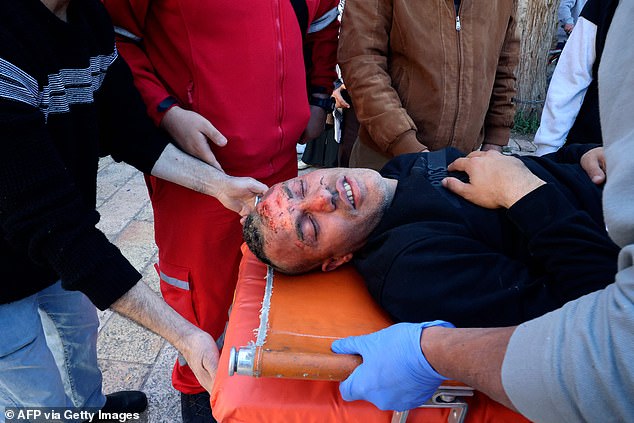 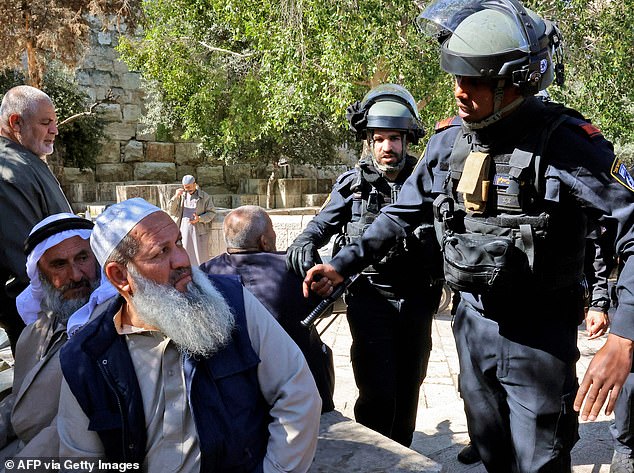 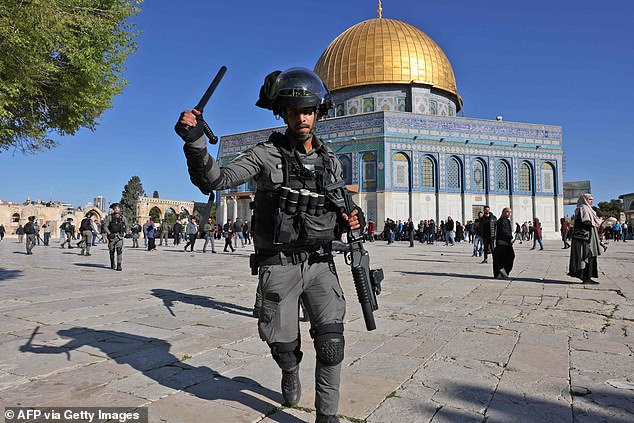 
He said Israel was committed to freedom of worship for Jews and Muslims alike. Police said Friday’s noon prayers at the mosque – when tens of thousands of people were expected – would take place as usual.

The mosque is the third holiest site in Islam. It is built on a hilltop in Jerusalem’s Old City that is the most sacred site for Jews, who refer to it as the Temple Mount because it was the site of the Jewish temples in antiquity.

It has been a major flashpoint for Israeli-Palestinian violence for decades and was the epicenter of the 2000-2005 Palestinian intifada, or uprising.

Tensions have soared in recent weeks following a series of attacks by Palestinians that killed 14 people inside Israel. Israel has carried out a wave of arrests and military operations across the occupied West Bank, setting off clashes with Palestinians.

The Palestinian Health Ministry said a 17-year-old died early Friday from wounds suffered during clashes with Israeli forces in Jenin, in the occupied West Bank, the day before.

Two weeks ago a pair of 18-year-old police officers were shot dead by gunmen in the northern city of Hadera.

Police said the two gunmen – Israeli Arab cousins identified by Israeli intelligence as local ISIS operatives – were killed by counterterrorism officers who happened to be dining in a restaurant nearby.

The slain officers were identified as Border Police officers Yezen Falah and Shirel Abukarat, both 19, who came from regional villages in the north of Israel and were in their first year of service. 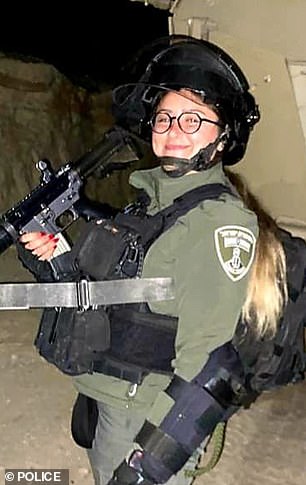 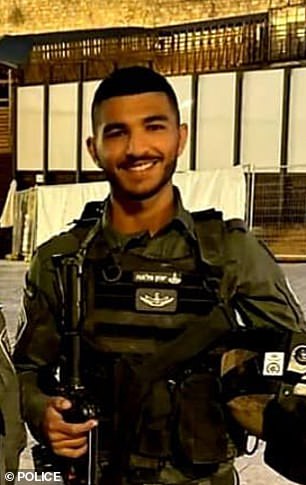 The two Israeli police officers, Shirel Abukarat and Yezen Falah,  killed in an ISIS terror attack were both 19 and in their first year of service 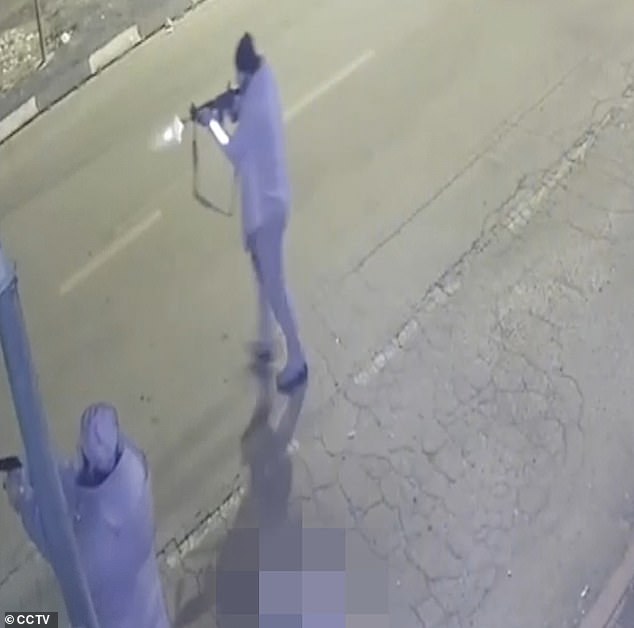 CCTV caught some of the attack. The two terrorists can be seen firing across the street at civilians. We have chosen not to show the body of one of the victims. 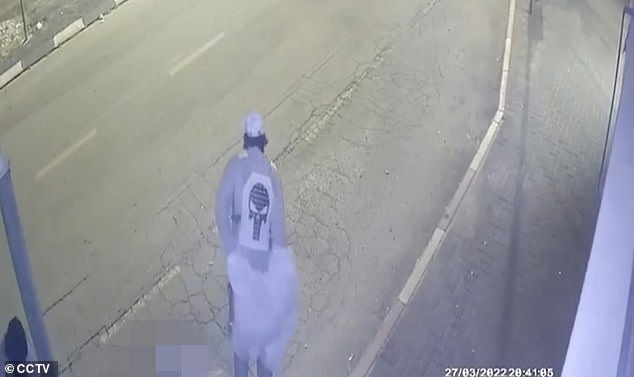 CCTV captured part of the attack on camera. One of the terrorists is seen removing his jacket to reveal a skull emblazoned on his back


At least 25 Palestinians have been killed in the recent wave of violence, according to an Associated Press count, many of whom had carried out attacks or were involved in the clashes, but also an unarmed woman and a lawyer who appears to have been killed by mistake.

Weeks of protests and clashes in Jerusalem during Ramadan last year eventually ignited an 11-day war with the Islamic militant group Hamas, which rules the Gaza Strip.

Israel had lifted restrictions and taken other steps to try and calm tensions ahead of Ramadan, but the attacks and the military raids have brought about another cycle of unrest.

Hamas condemned what it said were ‘brutal attacks’ on worshippers at Al-Aqsa by Israeli forces, saying Israel would bear ‘all the consequences.’ It called on all Palestinians to ‘stand by our people in Jerusalem.’

Earlier this week, Hamas and other militant groups in Gaza had called on Palestinians to camp out at the Al-Aqsa mosque over the weekend. Palestinians have long feared that Israel plans to take over the site or partition it.

Israeli authorities say they are committed to maintaining the status quo, but in recent years nationalist and religious Jews have visited the site in large numbers with police escorts.

Israel captured east Jerusalem, home to Al-Aqsa and other major holy sites, in the 1967 war and annexed it in a move not recognized internationally. Palestinians want the eastern part of the city to be the capital of a future independent state including the West Bank and Gaza, which Israel also captured during the war nearly 55 years ago.