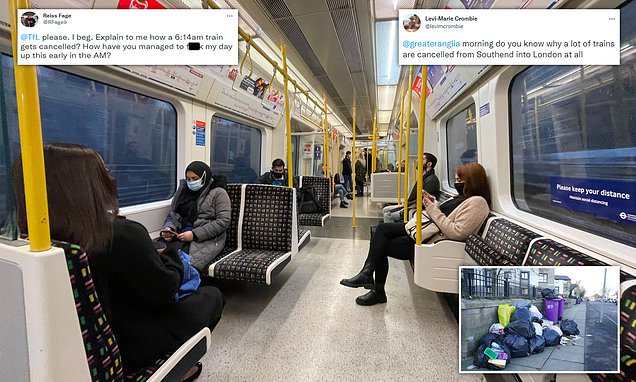 Covid staffing crisis leaves commuters facing another day of rail hell: Warning disruption could last for WEEKS with one in 10 workers off sick as bin collections, care homes and shops continue to be hit by milder Omicron wave

The misery of staff shortages that has led to reduced timetables across the UK was compounded by faults with trains and points this morning for those travelling to work across Londen en Birmingham.

One in ten NHS staff are now off sick or self-isolating with the milder but more contagious Omicron variant – and bin collections have been disrupted in Manchester, Birmingham, Londen, Cheshire, Essex and Cumbria.

Meanwhile a care home group boss in Yorkshire said the staffing challenge ‘is now at the worst it has been throughout the pandemic’, and school leaders told of their worries that staff shortages could worsen.

And shoppers have described long queues due to a lack of checkout staff and some empty shelves, especially for fresh items such as milk – with Iceland saying its number of staff self -isolating is now 1,000 up on a week ago. The continuing shortage of HGV drivers is also causing problems, leading to fears that some stores may have to shut.

On the trains, there was disruption for those using TfL Rail services between London Paddington and Hayes & Harlington in West London due to a points failure between Hanwell and Southall which was blocking some lines.

There were also delays on the Circle line on the London Underground today due to train cancellations.

Those using Greater Anglia trains from Essex as well as TfL Rail services in East London also faced delays this morning between Romford and London Liverpool Street due to a fault on a train at Stratford.

And in the West Midlands this morning there was disruption on CrossCountry and West Midlands Railway services between Birmingham New Street and Redditch due to a broken down train.

Most operators around Britain have already been forced to slash dozens of daily services due to around one in ten rail staff calling in sick – and some train firms will now run reduced services for several weeks.

TransPennine Express cancelled 24 trains yesterday, and CrossCountry has cut around 50 daily services until next week. LNER has removed 12 services a day on the East Coast Main Line between London and Leeds until Friday.

Southern is not running any services in and out of London Victoria until next Monday while the Gatwick Express, which resumed only three weeks ago after an 18-month closure, has been suspended indefinitely.

ScotRail will cut around 160 trains from its normal 2,000 a day until January 28, meaning fewer services in and out of Glasgow and Edinburgh. Meanwhile Transport for Wales cancelled almost 100 trains, including services between Newport and Crosskeys and Chester and Liverpool Lime Street.

And congestion on London’s roads increased significantly today as more schools went back in, with a figure of 35 per cent in the 8am to 9am time slot this morning. This was up from 22 per cent in the same time period yesterday – and was at its highest posted by TomTom for the time of day since December 17 last year when it was 41 persent.

It comes as self-isolation rules wreaked havoc on essential services and the number succumbing to the virus reached a record high, with heart attack victims told to ‘get a lift’ to hospital rather than wait for an ambulance. 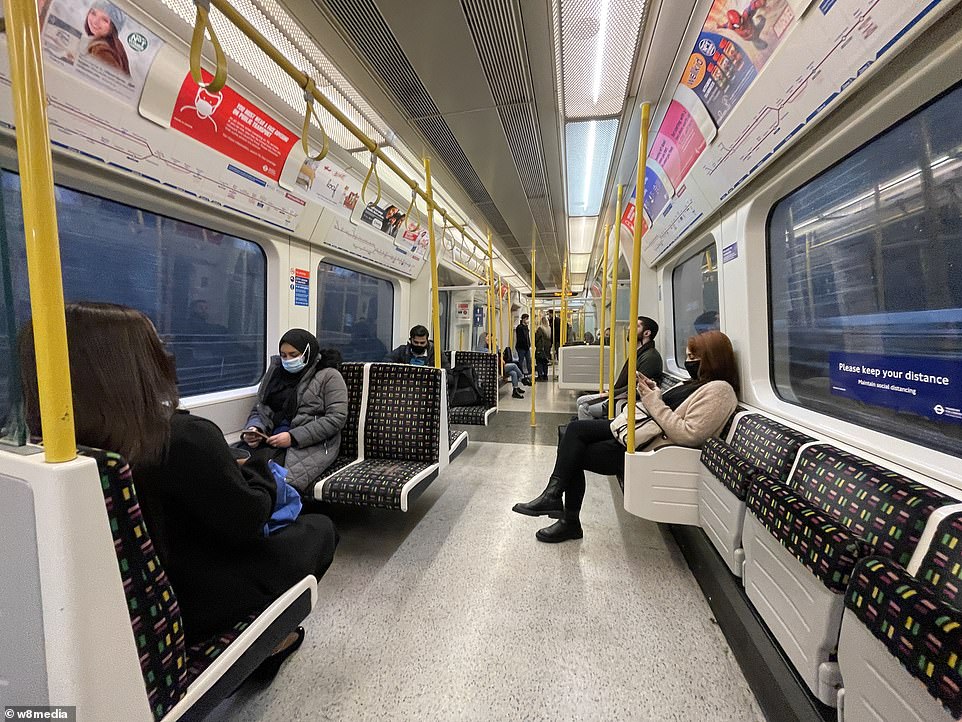 Commuters sit on a Metropolitan line service travelling on the London Underground during rush hour at about 7.15am today 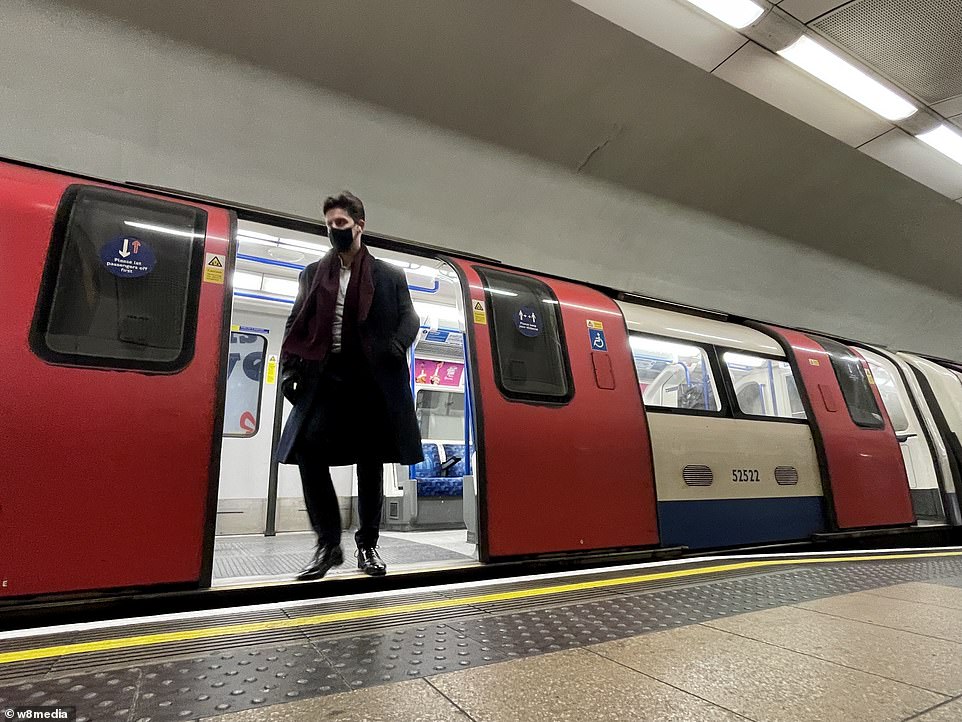 A rail passenger gets off a Northern line train on the London Underground during rush hour today at about 7.30am 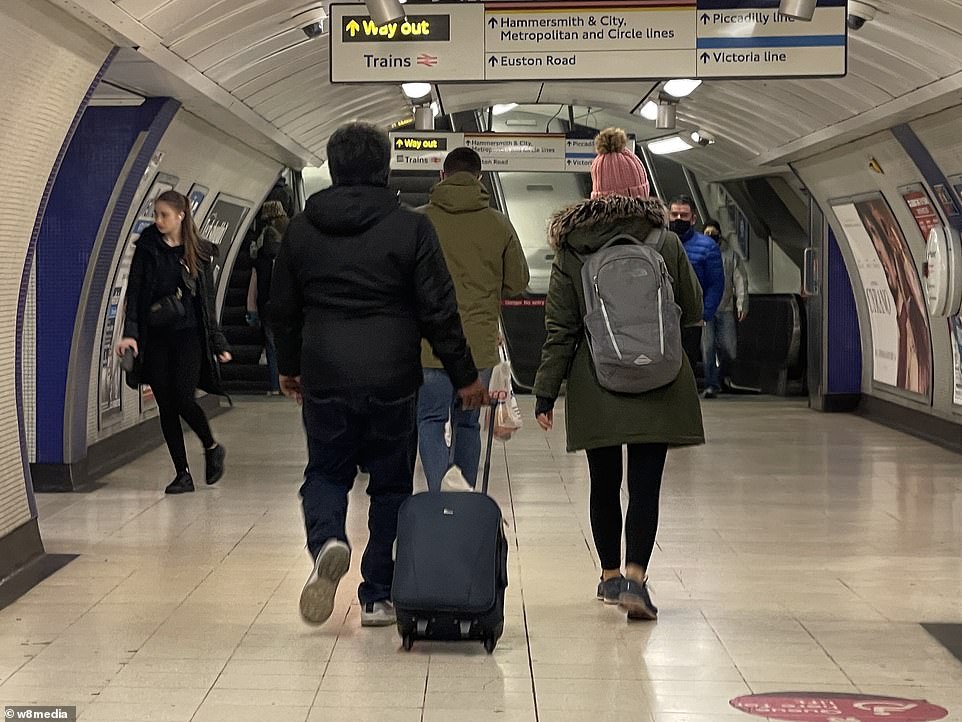 Commuters walk through Euston station on the London Underground during rush hour at about 7.30am this morning 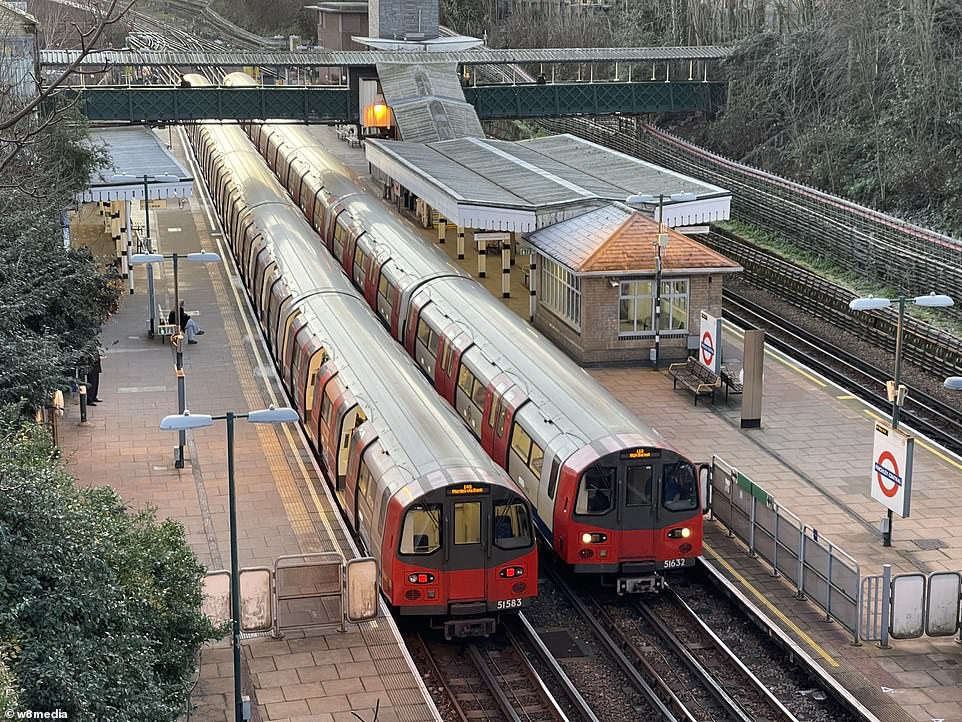 Northern line trains stand at Finchley Central station in North London during rush hour at about 8.15am this morning 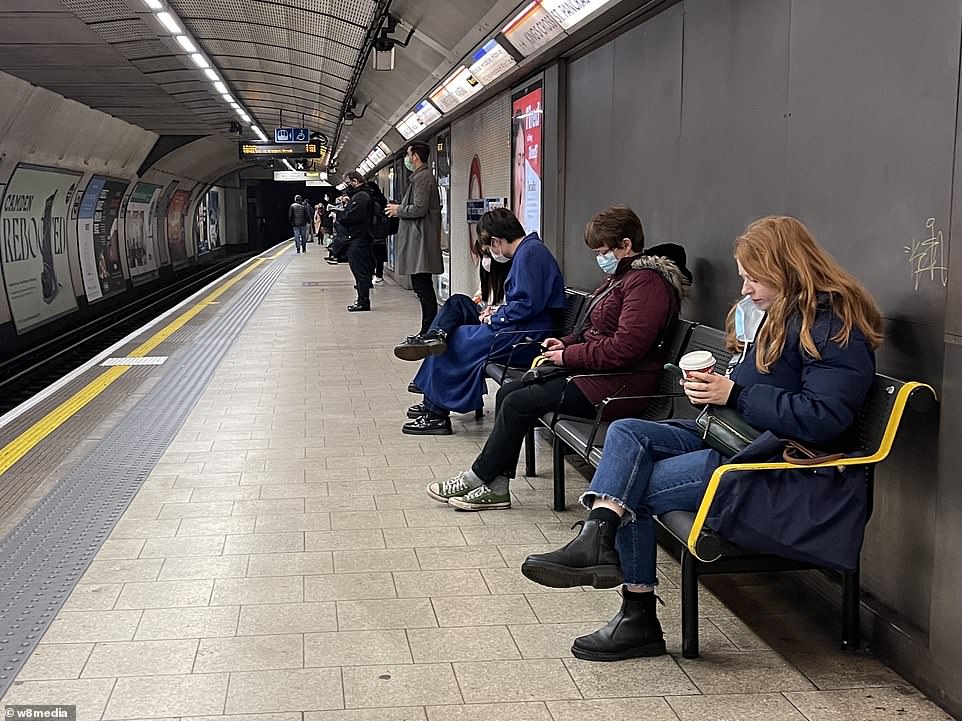 Rail passengers wait for a London Underground service on a platform at King’s Cross St Pancras at about 7.30am today 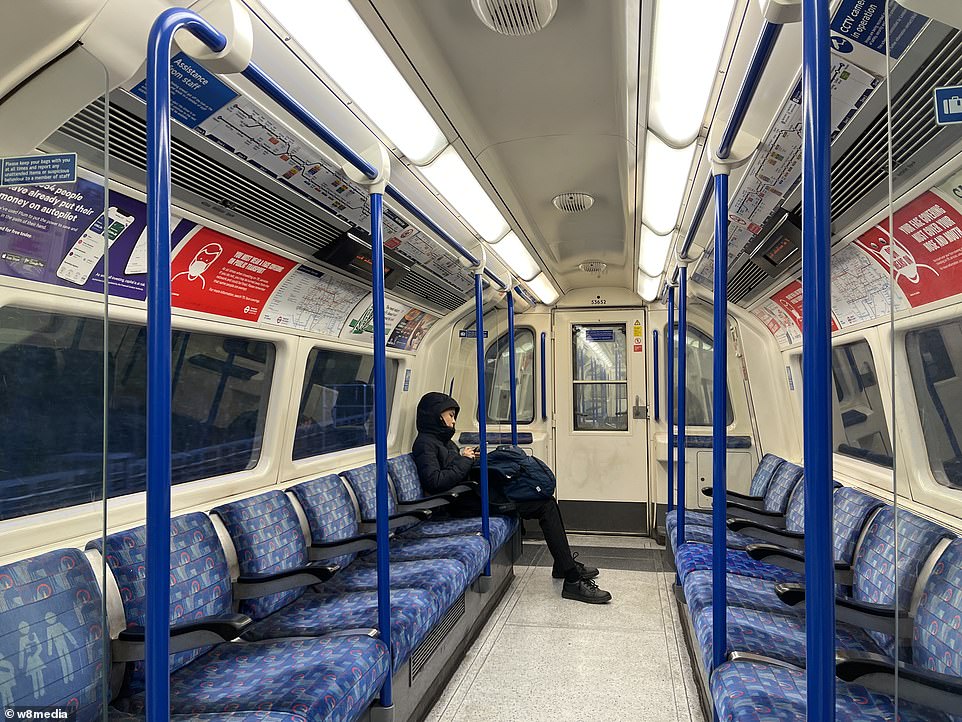 A lone passenger sat on a Northern line train during rush hour on the London Underground at about 8.15am this morning 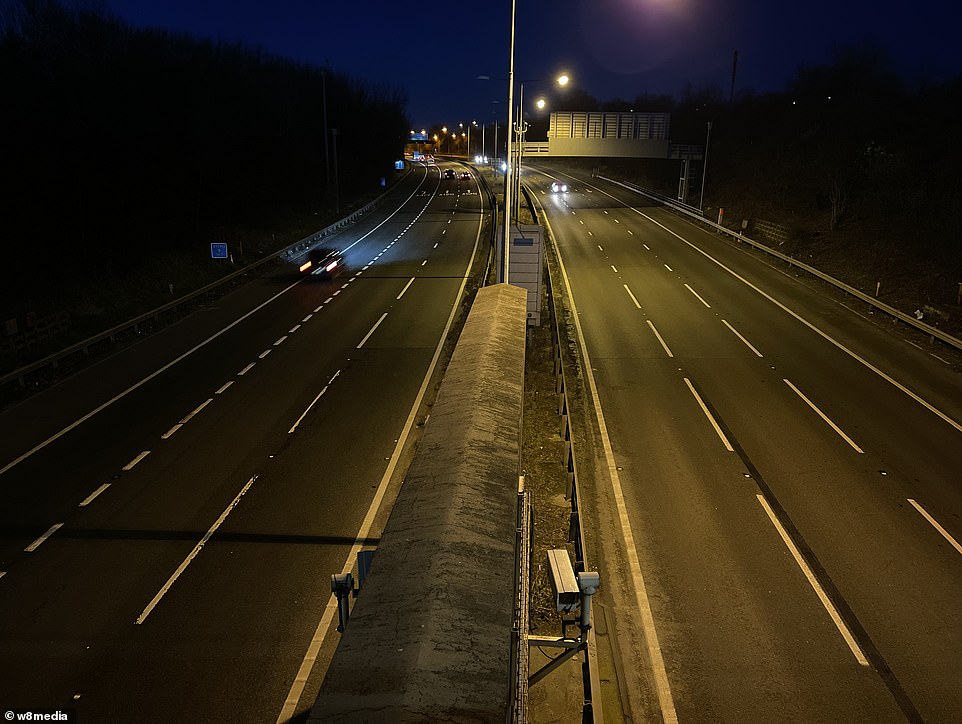 Craig Beaumont of the Federation of Small Businesses said: ‘Five-day isolation would help tackle some of the staff absences that we are seeing now really climb.’

But Mr Javid said: ‘We’re quite clear where we are with seven days… you need those two negative lateral flow tests in the final two days.’

Aside from the railways, the areas worst affected by the self-isolation rules include: 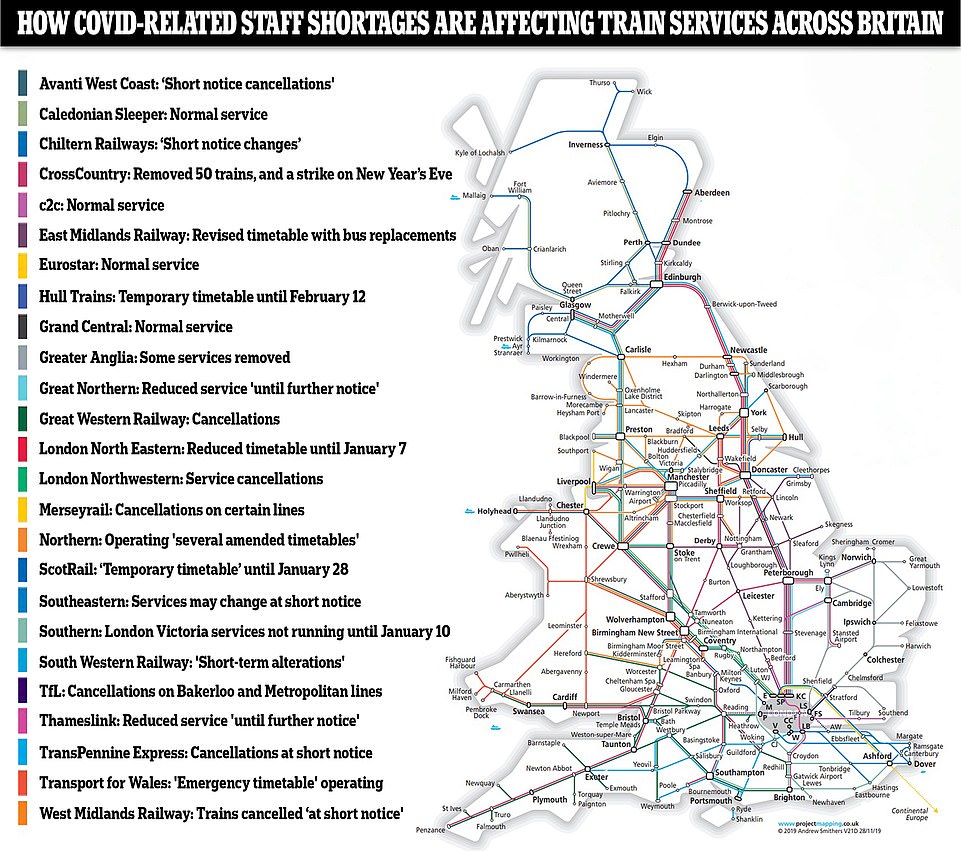 Congestion on London’s roads increased significantly today as more schools went back in, with a figure of 35 per cent in the 8am to 9am time slot this morning, according to TomTom. This was up from 22 per cent in the same time period yesterday

One in ten NHS staff are off sick or self-isolating. Bosses claim the shortages are making it ‘almost impossible’ to maintain basic patient care.

An ambulance trust yesterday asked patients with heart attacks and strokes to get a lift to hospital because it did not have enough fit paramedics.

The North East Ambulance Service Foundation Trust said call handlers should ‘consider asking the patient to be transported by friends or family’.

A message to staff said they were also having to ferry patients to hospital in taxis due to ‘unprecedented demand’.

Meanwhile at least eight hospital trusts have declared ‘critical incidents’, which means routine patient care is suffering and staff are being redeployed.

Plymouth’s Derriford Hospital had nearly 500 staff absent due to Covid. Morecambe Bay NHS Trust in Lancashire declared a critical incident due to the number of staff testing positive for coronavirus.

Dr Sakthi Karunanithi, public health director for the region, gesê: ‘We are bracing ourselves for a tsunami of Omicron cases in Lancashire.’

Matthew Taylor, chief executive of the NHS Confederation, said the staffing situation meant it was ‘becoming almost impossible’ to deal with ‘the most urgent and pressing needs’.

He told Times Radio that ‘the most pressing element of all’ is the number of staff who are absent due to the virus, rather than the number of Covid patients needing treatment. 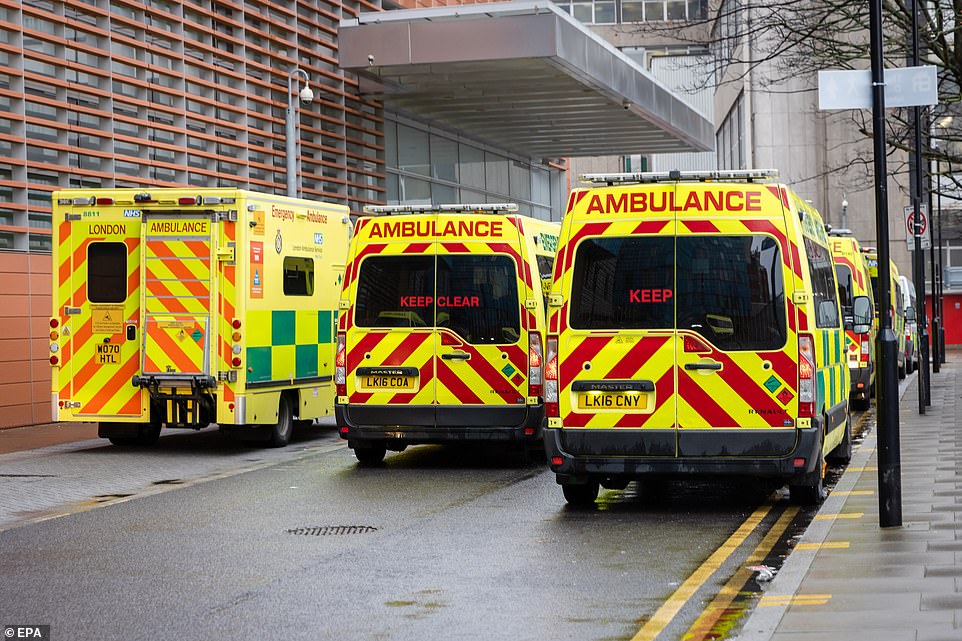 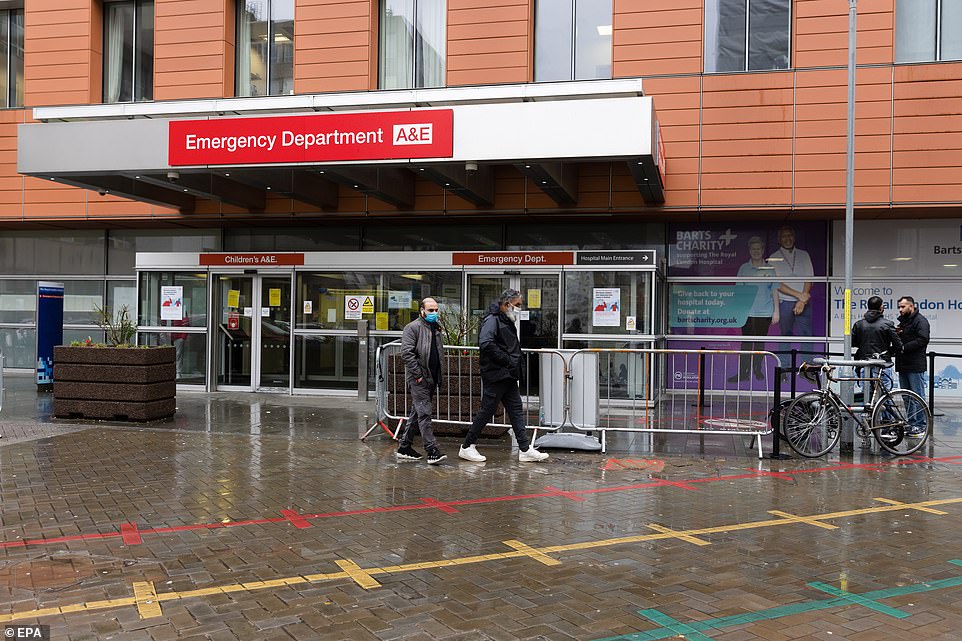 Manchester, Birmingham, Londen, Cheshire and parts of Essex and Cumbria announced that bin collections would have to be missed or rearranged. In Birmingham, rubbish was left to pile high in the streets.

Pavel Bartos, 23, of Aston, said residents had been waiting since before Christmas to have their bins emptied. ‘It’s been a nightmare and the place has been left looking like a complete tip,’ hy het gesê.

‘It is an absolute eyesore and we thought they would be collected by now, but they haven’t. It’s like living in a slum.

‘We were told the Christmas collections would be missed due to staff shortages but to be four days into the New Year and is still look like this is really bad.’

North Somerset Council was unable to pick up 1,000 recycling bins on New Year’s Eve because of staff illness. A spokesman for the Local Government Association called for council workers to be prioritised for Covid tests. 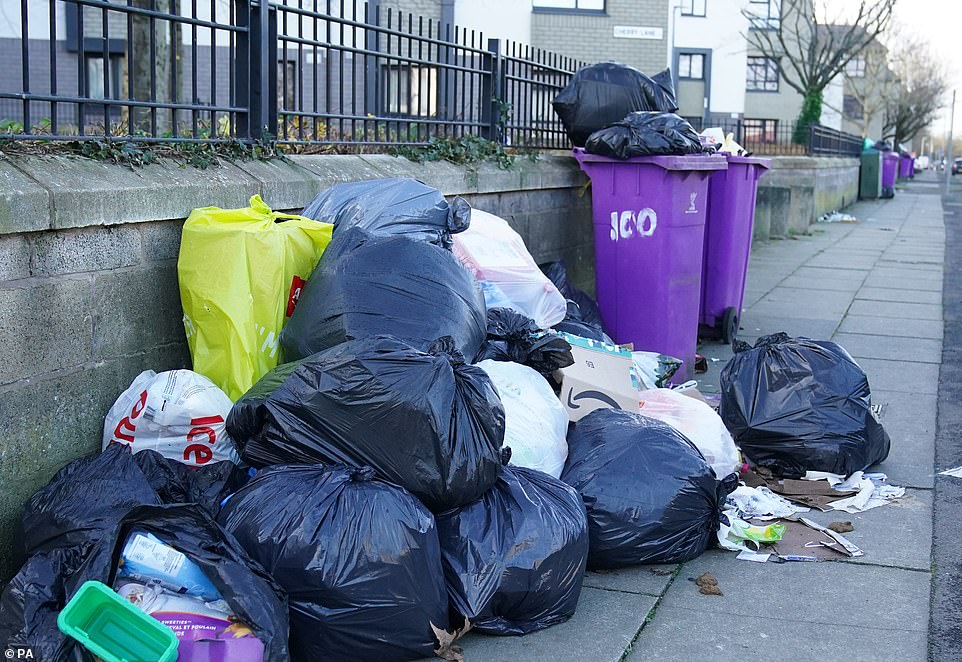 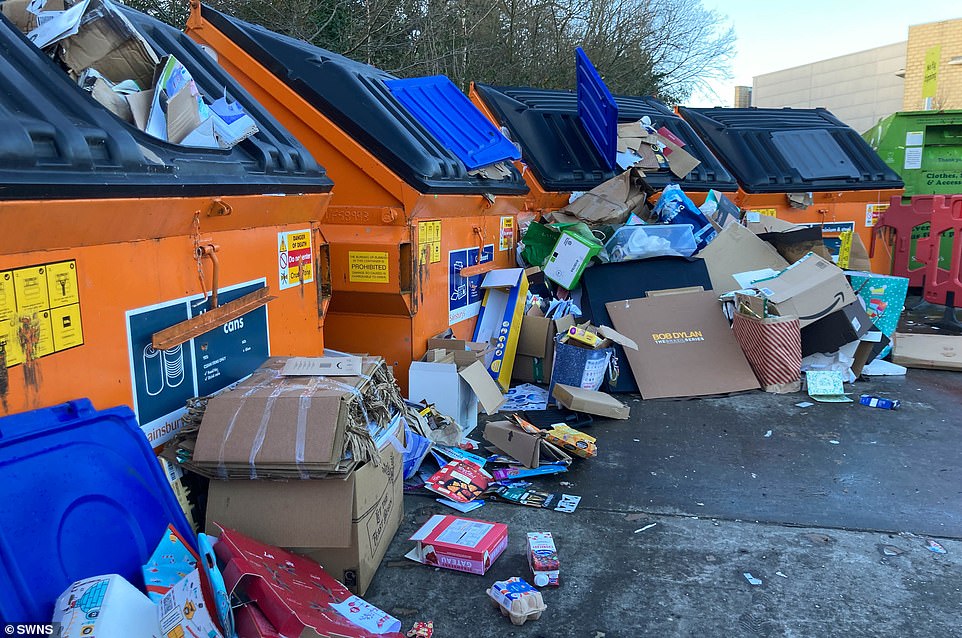 A huge pile of festive period rubbish and recycling that has formed outside a Sainsbury’s in Maypole, Birmingham, gister 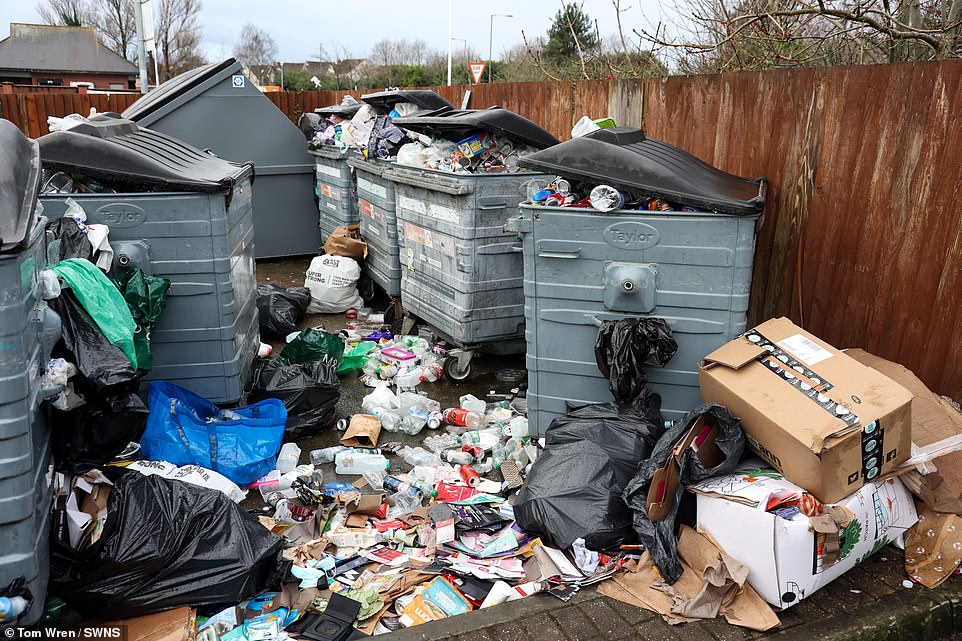 Mike Padgham, chairman of the Independent Care Group, which represents care homes in Yorkshire, said the staffing challenge ‘is now at the worst it has been throughout the pandemic’.

He said some care homes and home care providers are struggling to operate and called on the Government to appeal for retired nurses, dokters, and carers to come forward so they can help struggling social care services.

In a letter to ministers, hy het gesê: 'Soos jy weet, we need a fully functioning social care sector to ensure that NHS hospital care can function effectively and not be overwhelmed because people cannot be discharged to care settings.

'Op die oomblik, that cannot be guaranteed and I fear the setting up of surge hubs is not a long-term solution as they too will be struggling for staff.’ 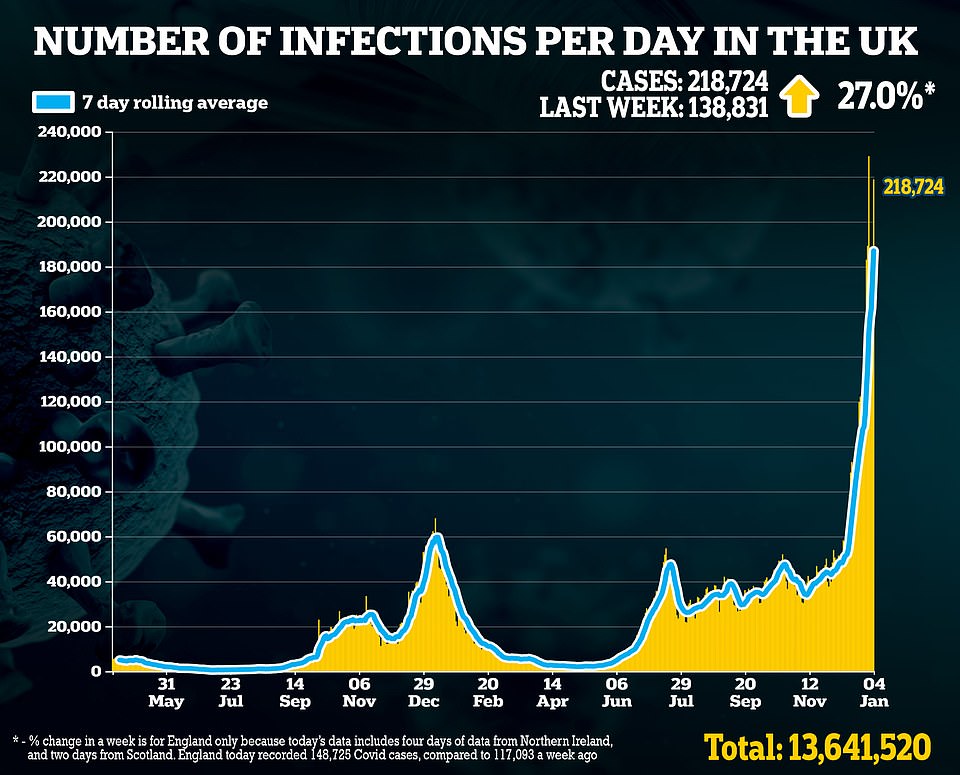 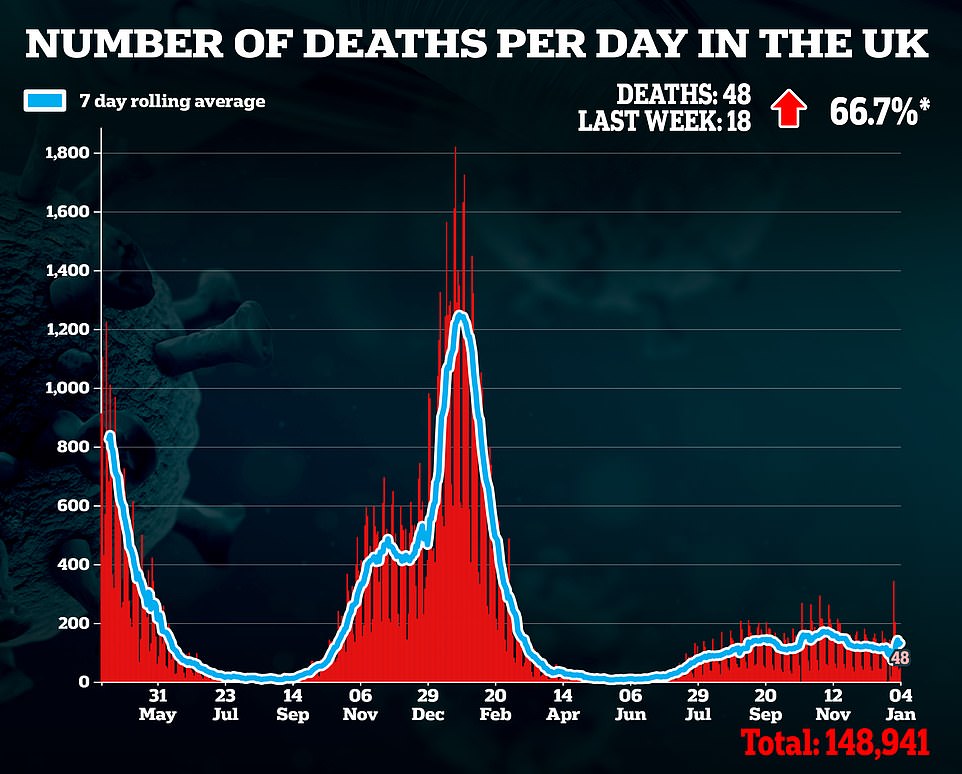 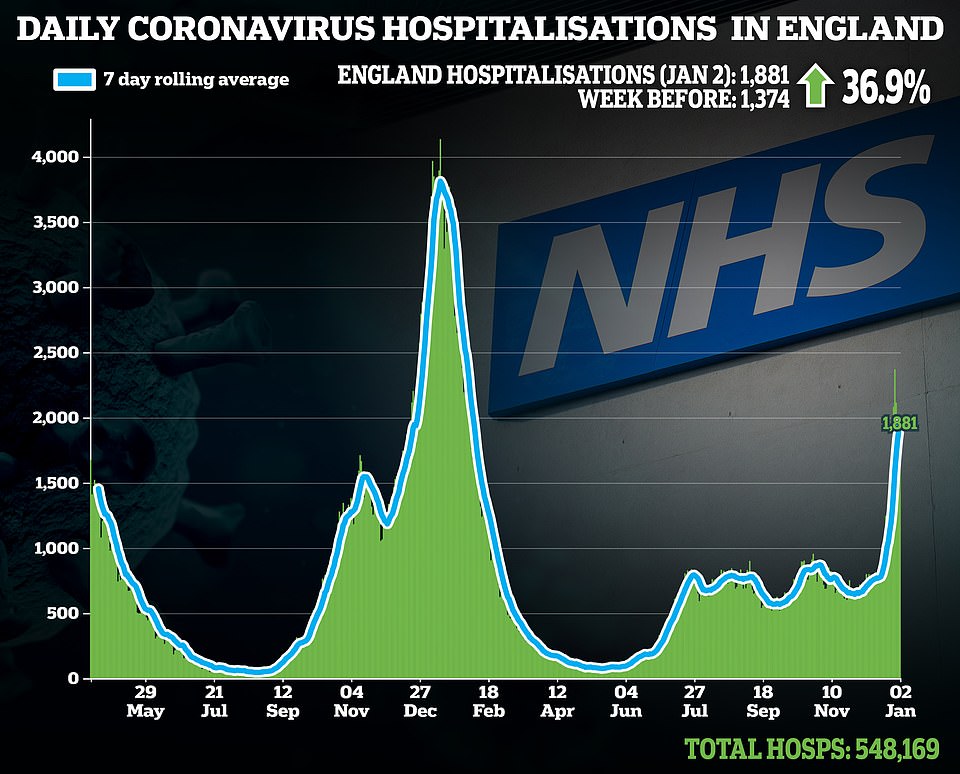 School leaders told of their worries that staff shortages could worsen and cause further disruption to children’s education.

Union leaders warned of a ‘stressful time’ ahead as existing teacher absences on the first day of term could become even more ‘challenging’ in the weeks ahead. Some schools are reporting that around one in five staff members could be missing at the start of term.

Pupils are returning to the classroom after the Christmas break, with advice for secondary school pupils in England to wear face masks in lessons due to a rise in coronavirus cases. Secondary and college students are also being encouraged to test on site before going back to class.

Some could end up wearing coats in lessons in the weeks ahead as heads and academy leaders increase ventilation to help keep classrooms safe.

Tenant who stabbed both his landlords, 66 en 60, to death in 'bloodbath' after first Covid lockdown made him paranoid is guilty of double murderDaniel Briceno Garcia, 46, carried out double murder after getting para... 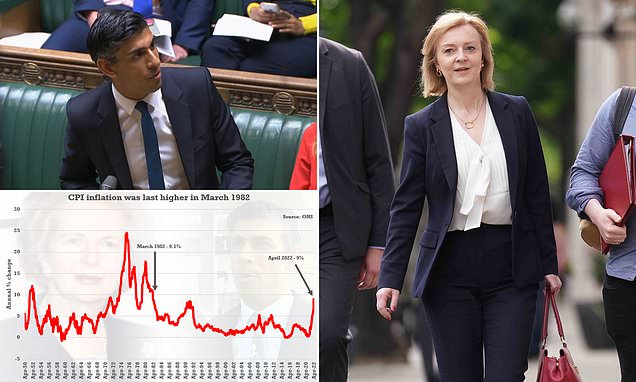