A father who was described as ‘one of the sickest ever’ Covid patients has only just come off a nasal cannula after falling ill with the virus more than a year ago.

Andrew Watts, 40, from Bexley, had one of the longest patient stays doctors had ever seen after being admitted to Queen Elizabeth Hospital, in Woolwich, with Covid-19 pneumonia on Christmas Day 2020.

In February, after a five-week induced coma and two life-threatening lung collapses, doctors called his wife Hayley to discuss turning off his ventilator because his condition had deteriorated so badly.

But after spending 300 days in hospital – including eight months in intensive care and two months on a ward – Mr Watts, who was in remission from lymph cancer at the time, was able to go home in October.

Now, the London cab driver has come off a nasal cannula for the first time since leaving hospital, but he still battles ongoing complications from his time on a ventilator. 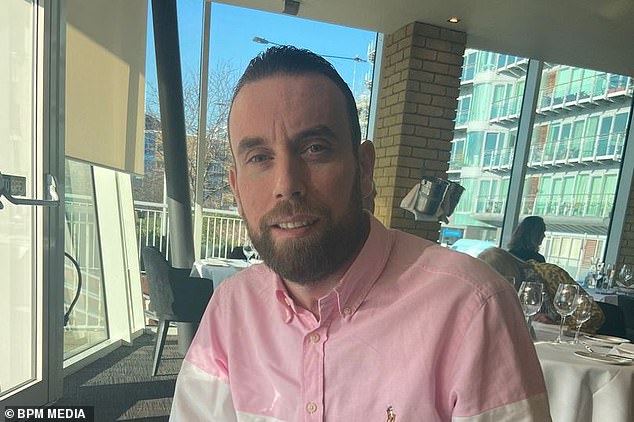 Andrew Watts (pictured), 40, from Bexley, had one of the longest patient stays doctors had ever seen after being admitted to hospital with Covid-19 pneumonia on Christmas Day 2020 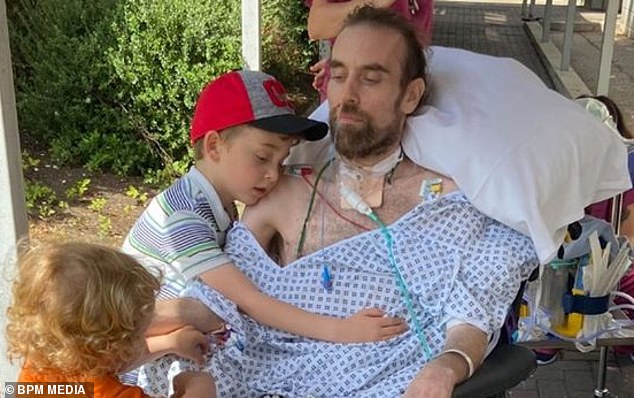 After a five-week induced coma and two life-threatening lung collapses, doctors called his wife Hayley to discuss turning off his ventilator. Pictured: Mr Watts while he was unwell

He told MyLondon: ‘Only a week and a half ago, I came off a nasal cannula (a device used to deliver supplementary oxygen) for the first time since leaving hospital.’

Mr Watts said he had been using the cannula for nine hours every night to help his lungs get back to ‘some sort of normality’.

Being on a ventilator in the ICU for months meant that Mr Watts had to learn to walk and talk again, and he is now able to walk for around 15 minutes at a time.

Mr Watts – who is a father to sons Jack, six, and Joshua, three – re-learnt to talk after communicating with his wife using letters on a board while on a tracheostomy pipe in hospital.

In November, Mr Watts said his ‘major goal’ was to walk to and from his son’s school and said he has finally managed to achieve his aim.

He added: ‘I managed to get to son’s school and back last Monday. I say that, we parked around the corner, so it wasn’t the full way. But still. 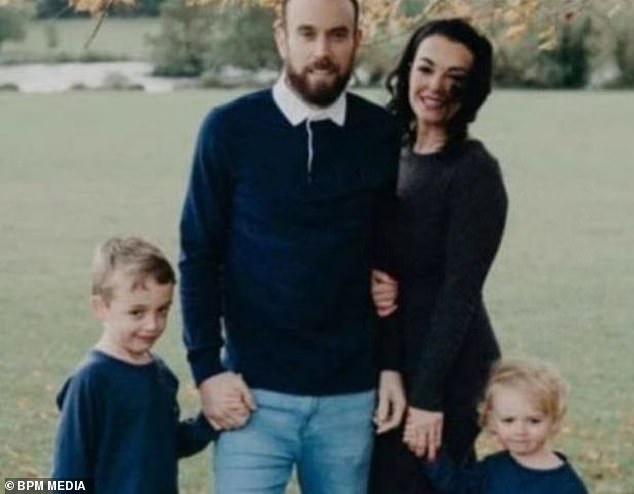 After spending 300 days in hospital, Mr Watts (pictured with his wife Hayley and sons Jack, six, and Joshua, three) was able to return home

‘I can do about 15 minutes walking before my legs start burning up. I think people should be grateful that they can do these little tasks.’

Mr Watts said that when he was ‘fit and healthy’ he took everyday things for granted, but said he realised not to take them for ‘granted’ when he became unwell.

But speaking of the complications he still tackles, Mr Watts, who was described by doctors as ‘one of the sickest Covid patients’, said his neck hasn’t yet healed properly from where a tracheostomy pipe was inserted in hospital.

He added: ‘That’s why there is a whistle when I’m talking, as there is essentially a hole in my neck where air comes out.

‘I can’t get water in it – or it makes me cough like mad.

‘I could get an infection, it means I can’t go swimming, I can’t shower the way I want to.’

When Mr Watts was first admitted to hospital in December 2020, he had not been vaccinated as it was in the early stages of the vaccination campaign, but he has now had three doses of a Covid vaccine.

Mr Watts has urged other Londoners to get vaccinated, saying that while he was in hospital, someone told him that they didn’t believe vaccinations would do anything and that the whole pandemic was a conspiracy.

‘The fact that there are people that know what I’ve been through and still say that!’ he added.

‘Its up to individuals [whether to get vaccinated]. If it was me, I would tell them to go and get it. If they decide not to get it, then that’s their own fault.’

Mr Watts said he was badly affected by Covid-19 because he was in remission from lymph cancer after successful chemotherapy treatment. 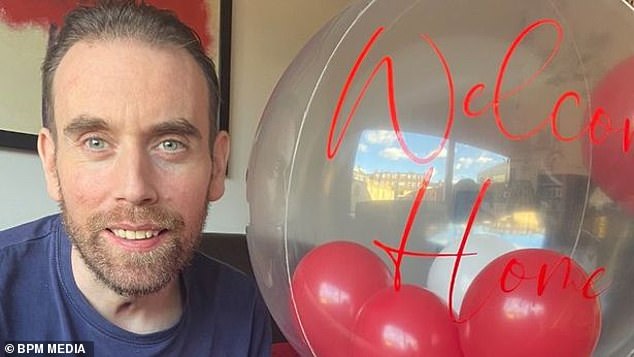 Now, the London cab driver (pictured) said he has come off a nasal cannula for the first time since leaving hospital. He had been using the cannula for nine hours every night

The father-of-two had been diagnosed with lymph cancer in October 2019 and spent much of 2020 carefully shielding due to being classed as vulnerable.

It comes as the Prime Minister today announced the end of Plan B measures, with the onus now falling on the British Public to mitigate the risks of Covid.

Mr Watts said he welcomes this change, despite still being clinically vulnerable, as he believes we have to learn to ‘live’ with the virus.

He continued: ‘I want everyone to live their lives to the max, this isn’t going anywhere we’ve got to learn to live with it.

‘I could wrap myself in cotton wool and live in a box but then what’s the point in living?’

Mr Watts added that he was taking the ‘necessary precautions’ and said it is ‘unlikely’ that he would get the virus again.

Speaking about being branded London’s ‘sickest ever’ Covid patient, Andrew said: ‘I fought until the end, I wanted to get back to the kids and the wife.

‘It’s been a bit surreal to me to be honest. I think, why did it happen to me? I feel proud that I managed to get out of it, and out the other side, and get my life back.’

When he was discharged, medical staff, including doctors, nurses, physios and speech and language therapists turned out to say goodbye on October 21.

after, breathing, Covid, Getting, oxygen, starts, support, without 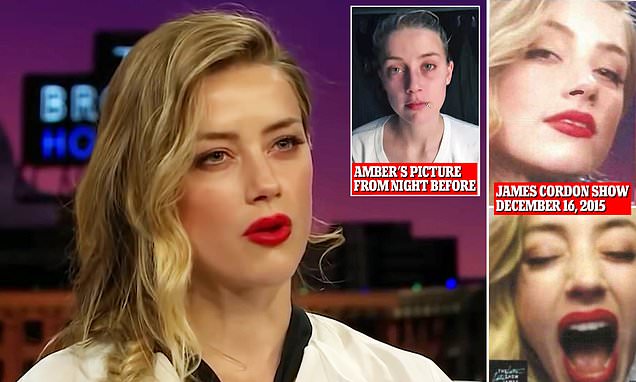 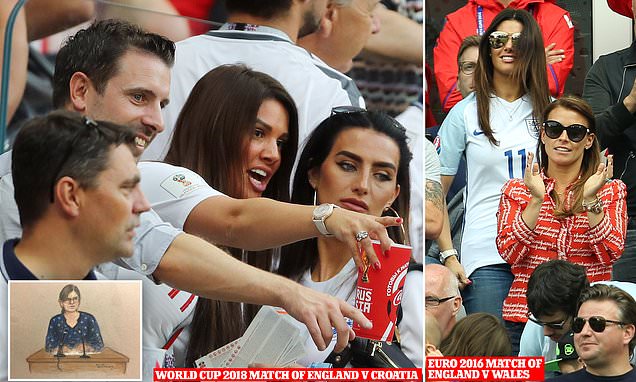 'We can sit where we like, f**k off': FA Official was nearly 'in tears' after finding Rebekah Vardy's friends in her reserved seats at Euro 2016 game - when WAG moved places to 'maximise her media attention', Wagatha... 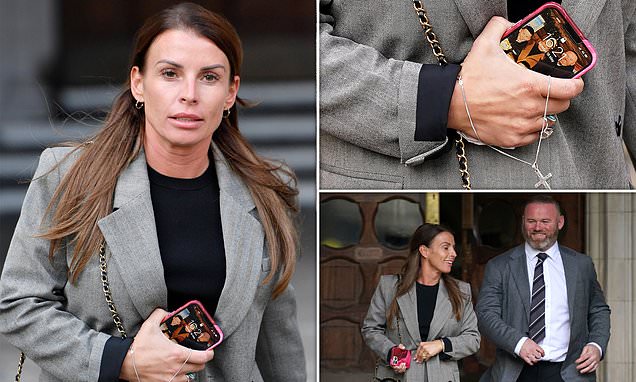