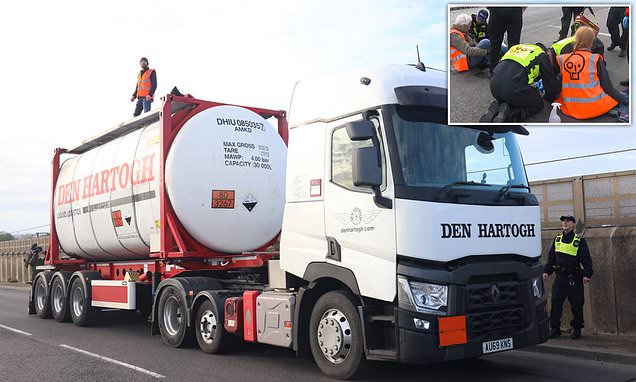 Eco-mob Just Stop Oil have launched a 12th day of action, by gluing their hands to roads and climbing on top of oil tankers.

The group have launched a protest in Purfleet, Essex today. There is an Esso oil refinery on the outskirts of the town, along with a number of fuel tanker depots.

Essex Police are at the scene, with video attempting to remove activists from the road.

The latest protest is the 12th day of action by Just Stop Oil. The eco-mob had their first day off since April 1 gister.

‘We decided to give them a break,’ a campaign spokesperson said yesterday.

Oor 400 people have been arrested a total of 900 times for taking action so far, according to the campaign. 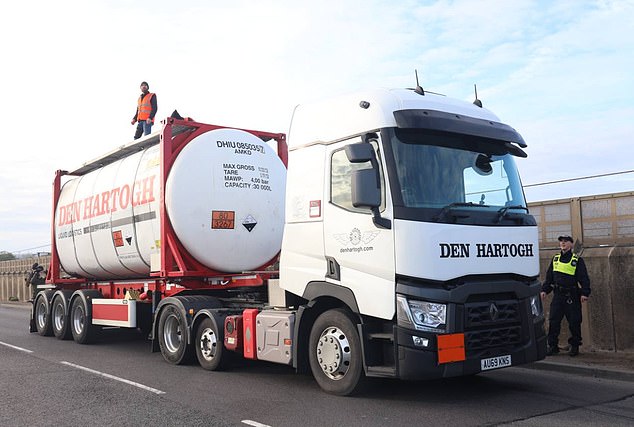 Eco-mob Just Stop Oil have launched a 12th day of action, by glueing themselves to roads and climbing on top of oil tankers 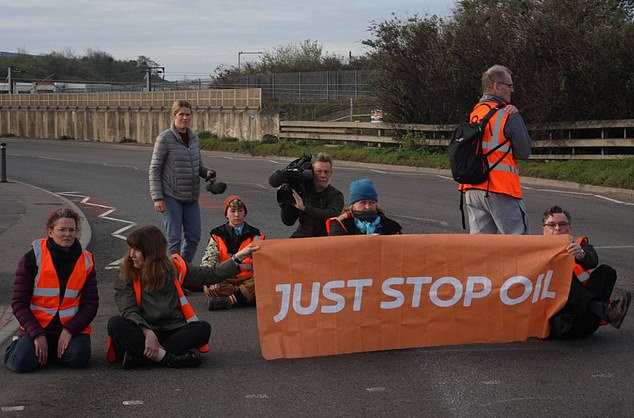 The group have launched a protest in Purfleet, Essex. There is an Esso oil refinery on the outskirts of the town 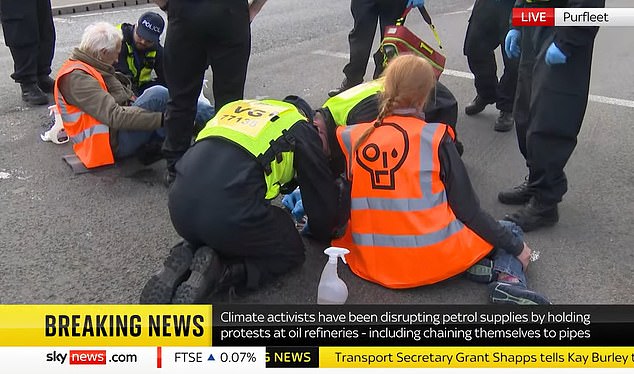 It comes after around 40 eco-activists were arrested at Inter Terminals in Grays, Essex, Maandag.

Members of the group had spent more than 38 hours locked on to pipework above the loading bay.

In the strongest statement yet on the eco-mob ‘Just Stop Oil’, Nommer 10 pledged that it would ‘not tolerate’ those obstructing people ‘going about their day-to-day business’.

Responding to the group’s tactics, a No 10 woordvoerder gesê: ‘We recognise the strength of feeling and the right to protest is a cornerstone of our democracy, maar ons sal nie guerrilla-taktieke duld wat mense verhinder om met hul daaglikse sake te gaan nie.’ 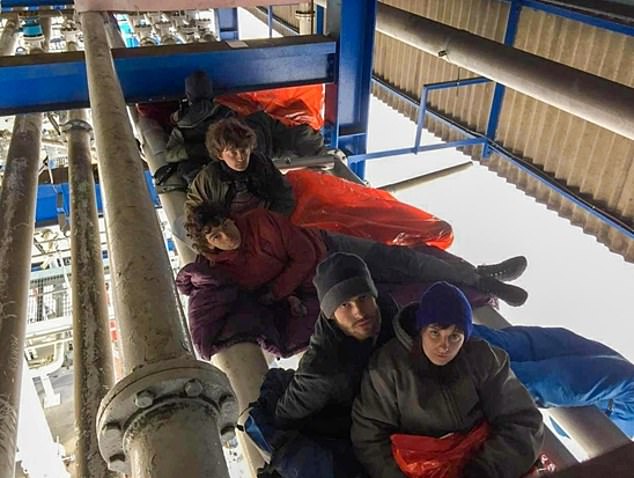 A group of Just Stop Oil activists at a major oil depot in Grays, Essex, Maandag 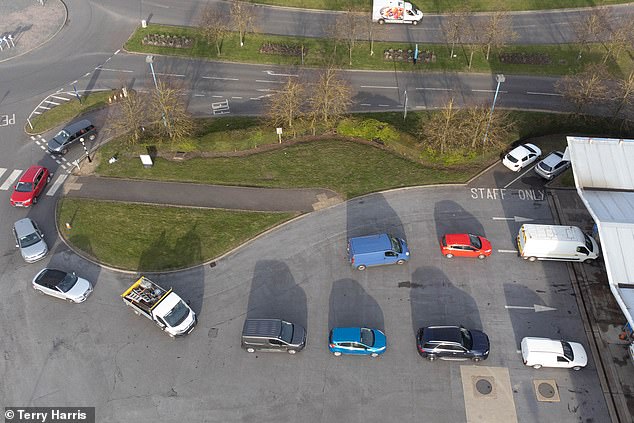 Long queues at a petrol station in Hampton, Peterborough on Monday morning, where only a few pumps were in operation 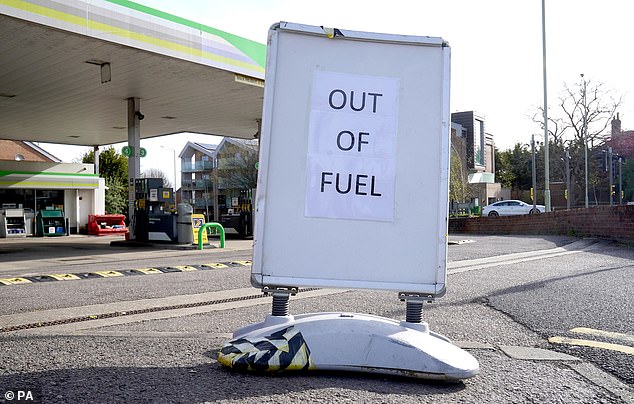 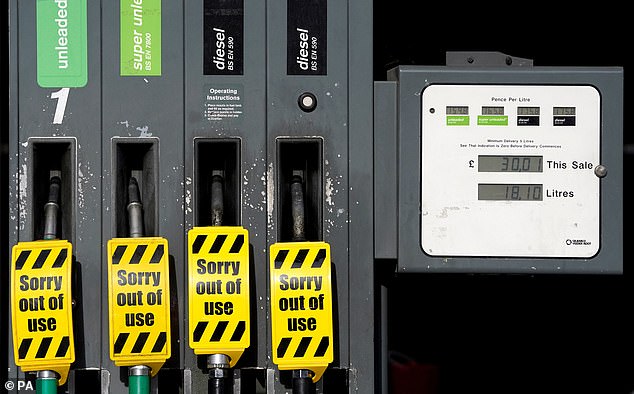 A judge has praised Isoleer Brittanje protesters whose M25 stunt delayed an ambulance carrying an ‘urgent patient’ as 12 were fined over a demonstration which disrupted the journeys of an estimated 18,000 drivers on the M25.

The eco mob blocked traffic, including an ambulance carrying a patient, by sitting across Junction 3, a busy interchange on the motorway at Swanley, Kent, op September 29, 2021.

Some demonstrators glued themselves to the tarmac, one stuck himself to a police car and another, Karen Matthews, refused to move out of the way of an ambulance that was transporting a patient to hospital, het die hof gehoor.

Matthews, 60, was among three protesters – including Ian Bates, 63, and Biff Whipster, 54 – who were told by District Judge Stephen Leake they had ‘inspired’ him after making impassioned speeches about their concerns over the climate while representing themselves in court.

But the judge added that his role was to ‘apply the law’ and said their actions had caused ‘significant disruption’ to the motorway.

Hy het gesê: ‘I have heard your voices.

‘They have inspired me and personally I intend to do what I can to reduce my own impact on the planet, so to that extent your voices are certainly heard,’ het die regter gesê.

‘These are difficult cases for us judges because we have to apply the law and that is what we have sworn our judicial oaths to do.’

In totaal, nine of the activists admitted charges in relation to the protest either by post or in person at Crawley Magistrates’ Court on Tuesday.

Bates and Matthews, as well as Mary Adams, 68, Margurite Doubleday, 67, Bethany Mogie, 39, Xavier Gonzalez-Trimmer, 21, and Lucy Crawford, 52, each pleaded guilty to wilful obstruction of free passage of the highway.

Whipster, from Canterbury, admitted criminal damage by leaving a ‘hard, crusty layer of glue’ on the window of a police vehicle during the demonstration.

The court heard how a number of protesters had been spotted by police officers ‘hiding in woodland’ before the chaos unfurled near the junction.

Prosecutor Kat Shields said two were asked whether they were there to demonstrate to which they replied: 'Geen, we are just nature lovers.’

But the group then ran into the middle of the road and spread out across two areas of the junction, bringing traffic to a standstill, het die hof gehoor.

An ambulance carrying a patient who ‘urgently needed to be transported’ was delayed when Adams refused to move out of its path, with officers having to ‘drag’ her out of the way, het die aanklaer gesê.

The cost to the economy caused by the disruption was about £4,603, met 'n geskatte 18,000 vehicles affected across the wider area, according to evidence from National Highways.

The spokeswoman added: ‘We fully support the police who are putting significant resource into their response to the demonstrations.’

It comes as a furious motorist earlier this week revealed how they had to drive 46 miles to fill up because of the disruption to the UK’s petrol supplies, while others said they did not have enough fuel to go to work today.

One driver, recounting their nightmare journey yesterday, aan MailOnline gesê: ‘Every petrol station we tried was shut – we drove 11 miles to Aylesbury first and then 17 miles to Bicester before giving up and driving the ten miles back home.

‘The next day we drove to Winslow which is another eight miles away before finding fuel there. It is total pot luck’

Maandagoggend, other drivers took to social media to vent their frustration at the protesters’ ‘selfish, naive’ aksies. 'Geen petrol stations near to me have any fuel, no fuel means I can’t work,’ een Twitter user wrote.

Nog een het bygevoeg: ‘I’m working today. I have enough petrol to get there but we probably don’t have enough fuel in the work vehicles to take vulnerable people to medical appointments so they’ll have to be cancelled.’

Campaign group Fair Fuel said up to a third of petrol stations were closed yesterday, while pictures showed some remained shut today.

The AA on Sunday night said shortages had been ‘isolated’ and none of its 2,700 patrols had experienced difficulties getting fuel.

Intussen, the Petrol Retailers Association, which represents around 65% of independently owned forecourts, gesê: ‘We are aware of protests at several fuel supply sites; egter, the majority are unaffected.’

Supply issues tend to hit motorists in London and the South East worse than elsewhere.

This is most likely due the regions’ higher population densities, Gordon Balmer, executive director of the Petrol Retailers Association, has previously said.

A video posted at 3.30am on Monday morning showed one activist at Grays oil depot filming a selfie video from inside a pipe.

‘We really hope to make it to 24 hours and beyond because that’s the only way this government will listen.

‘This corrupt government that is pushing us towards not just a climate catastrophe but a social crisis.

Vandag, Environment Secretary George Eustice said: ‘A right to protest is important but not if it’s causing havoc with other people’s lives. That’s wrong and not acceptable.

‘We all recognise that we need to reduce our reliance on fossil fuels… this is a mainstream agenda, people really don’t need to do these extreme protests to get their point heard.’ 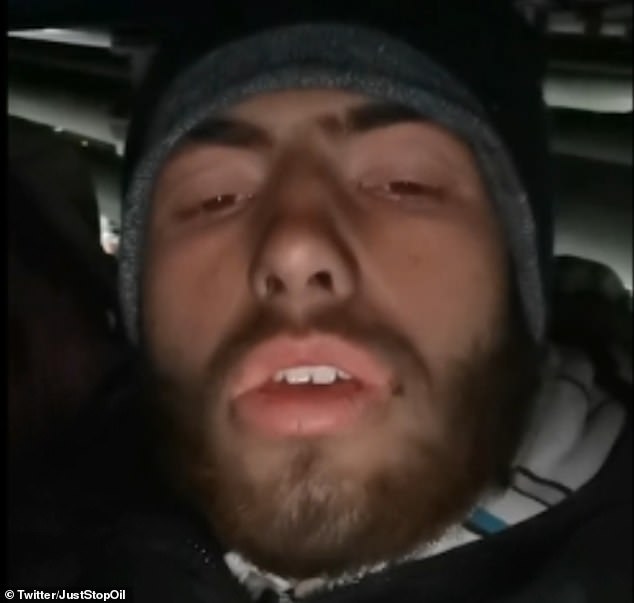 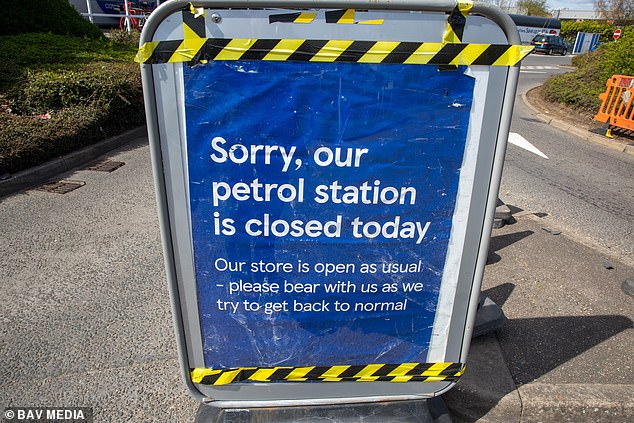 
Protesters have been holding up fuel supplies by targeting Grays oil depot and two other crucial sites in Warwickshire and Hertfordshire.

And yesterday some also blocked two central Londen bridges in a series of ‘exceptionally dangerous’ stunts.

Gister, a frustrated Priti Patel said: ‘Hard-working people across our country are seeing their lives brought to a standstill by selfish, fanatical and frankly dangerous so-called activists.

‘Keir Starmer’s Labour Party repeatedly voted against our proposals that would have given the police extra powers to deal with this eco mob. The police have my full backing in doing everything necessary to address this public nuisance.’

In a sign of the havoc, nearly a third of drivers surveyed in the Midlands and the South East reported a lack of fuel at forecourts. Diesel was in especially short supply. 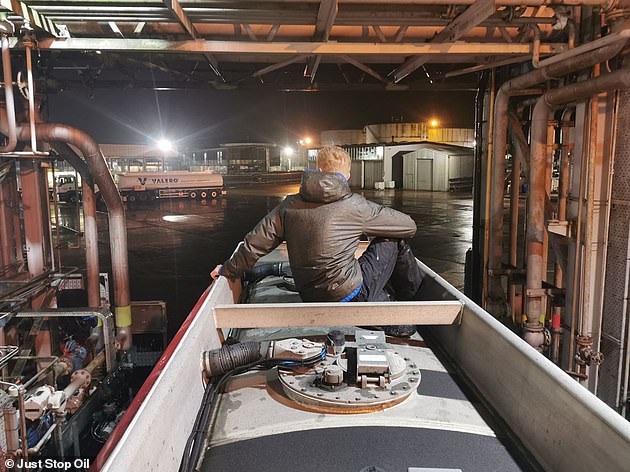 At the Kingsbury oil terminal in Warwickshire (op die foto), protesters claimed to have dug a tunnel under a tanker route in a bid to block deliveries to forecourts 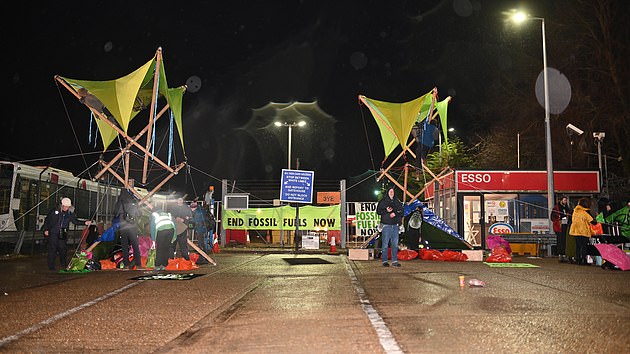 Ministers had planned to introduce new powers to help police tackle eco-protesters but the measures were blocked in the House of Lords in January.

Proposed measures had included an offence of ‘locking on’ in a bid to stop protesters resorting to the common tactic of chaining themselves to buildings and vehicles.

New stop and search powers were also proposed to allow police to detain protesters arriving carrying bike locks and other equipment designed to make themselves difficult to remove.

Ministers are expected to try to revive the measures in the next Queen’s Speech.

At the Kingsbury oil terminal in Warwickshire they claimed to have dug a tunnel under a tanker route in a bid to block deliveries to forecourts.

Tot by 40 campaigners then locked themselves to the gates of the Buncefield terminal in Hertfordshire.

This was followed by further action at the Exolum storage terminal in Grays, Essex.

The group has vowed to continue until ministers agree to stop all new fossil fuel investments. On Lambeth Bridge, hundreds of protesters prevented cars and buses from using the key route linking north and south London.

The protest had a festival atmosphere, with speakers playing dance music and a stall handing out pasta and falafel. The activists sat down and refused to move for hours. However they allowed ambulances to pass.

A samba band joined the protesters blocking cars and buses on Vauxhall Bridge. 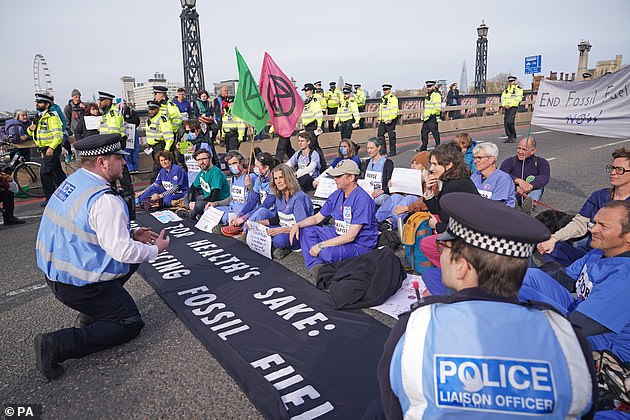 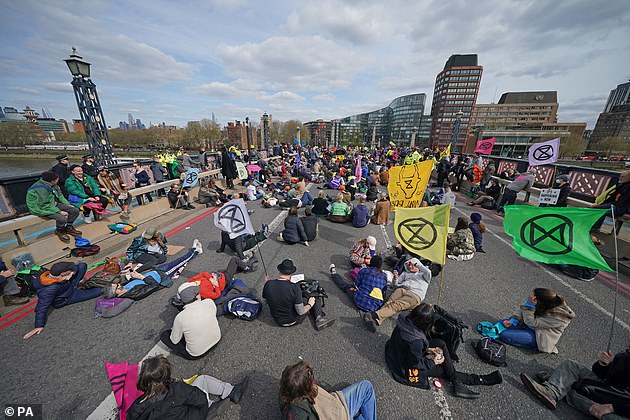 The protest had a festival atmosphere, with speakers playing dance music and a stall handing out pasta and falafel

Assistant Chief Constable Glen Pavelin said: ‘We cannot stand by while criminal acts are being committed, and lives are being put at risk, in the name of protest.’

The force has made 338 arrests since the protests began on April 1.

Warwickshire Police has detained 180 people and its assistant chief constable, Ben Smith, gesê: ‘While we will always recognise and respect the public’s right to peaceful protest, we will take action against anyone who breaks the law or causes significant impact on the local community.’

A spokesman for the UK Petroleum Industry Association said: ‘The industry is working hard to ensure fuels are being delivered as quickly as possible.’