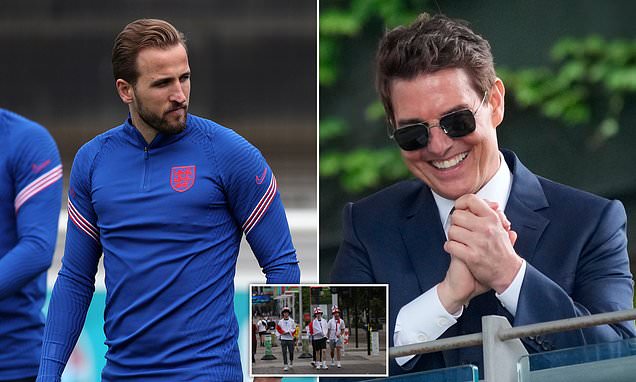 Hollywood legend Tom Cruise wished the England football team ‘the best’ in their Euro 2020 final against Italy at Wembley in a surprise FaceTime video call on Friday night, captain Harry Kane has revealed.

The skipper told BBC Radio 5 Live last night that the Mission Impossible actor – who was at Wimbledon yesterday watching the women’s final – personally called Gareth Southgate’s squad to wish the Three Lions well in their biggest match since the 1966 World Cup final.

Kane added the team had watched a special preview preview of the anticipated Top Gun sequel.

He said: ‘We actually had Tom Cruise get in touch yesterday evening, you get everyone who loves football. We were fortunate enough to watch one of his films, so I think he was over here in the UK and he just dialled in and FaceTimed us just to wish us the best of a group, so that was nice of him.

‘The majority of people in the world love football, so it’s great to have all that support not just in England but across the world. It’s been a great time for all of us, we’ve enjoyed every moment of it so we’re just looking forward to hopefully finishing the job.’

Cruise is just the latest public figure to wish England good luck ahead of tonight’s final at Wembley.

In a good-luck video message posted on Twitter, Prince William wished ‘every member of the England team on and off the pitch’ the ‘very best of luck’ as he said: ‘I can’t really believe this is happening’. 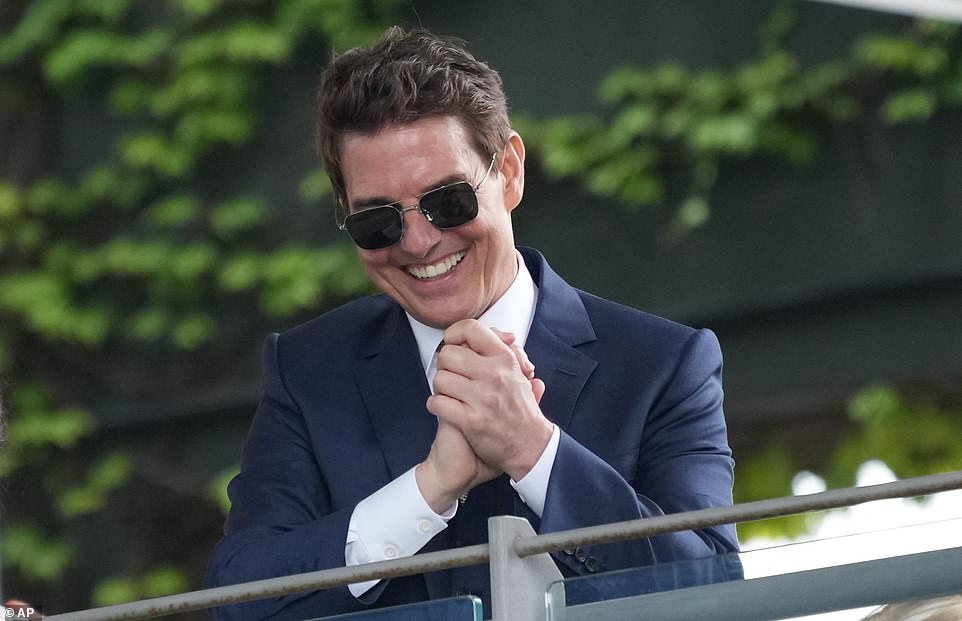 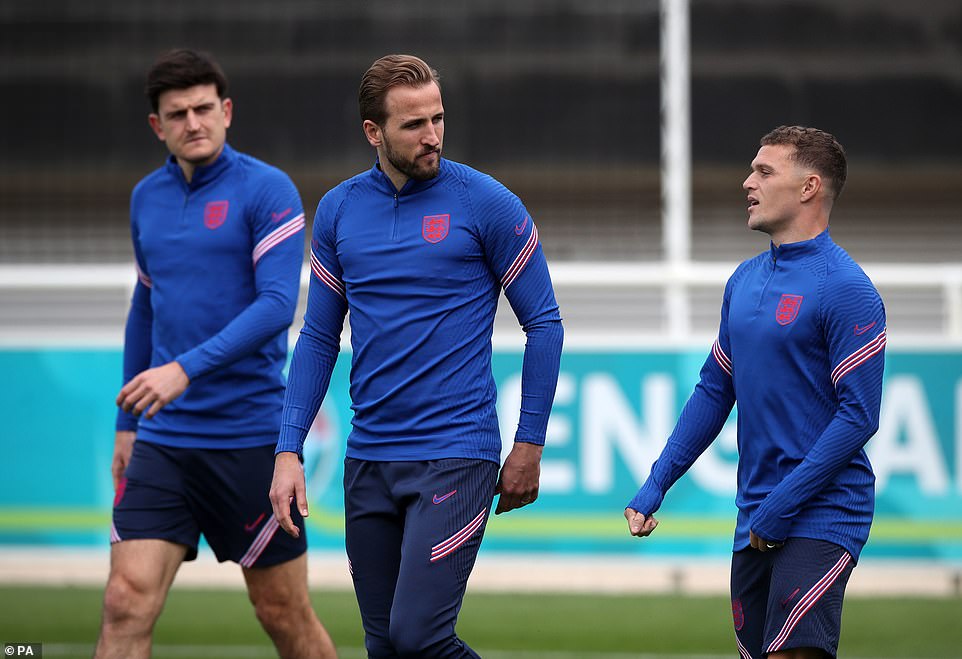 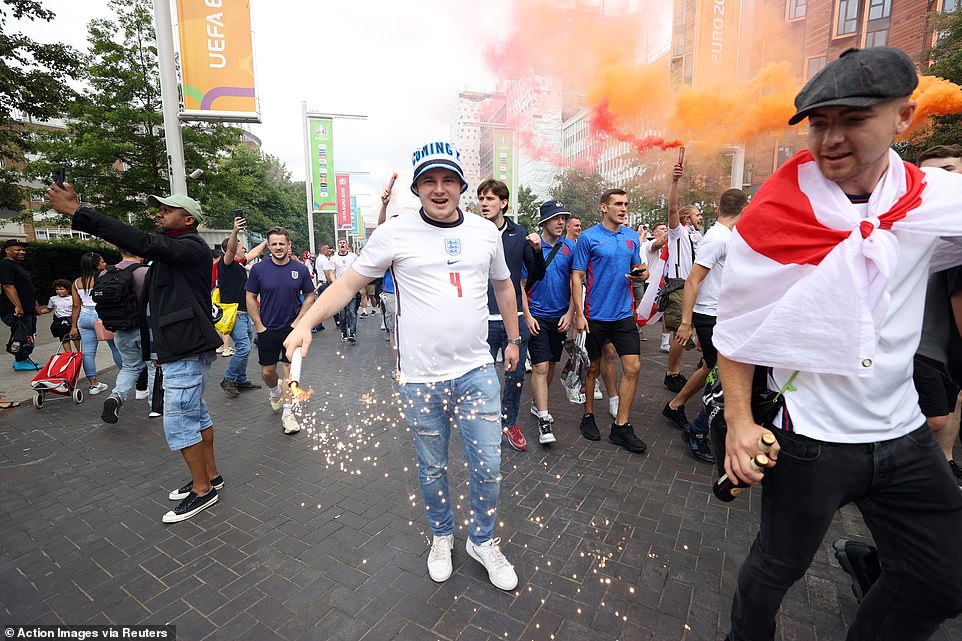 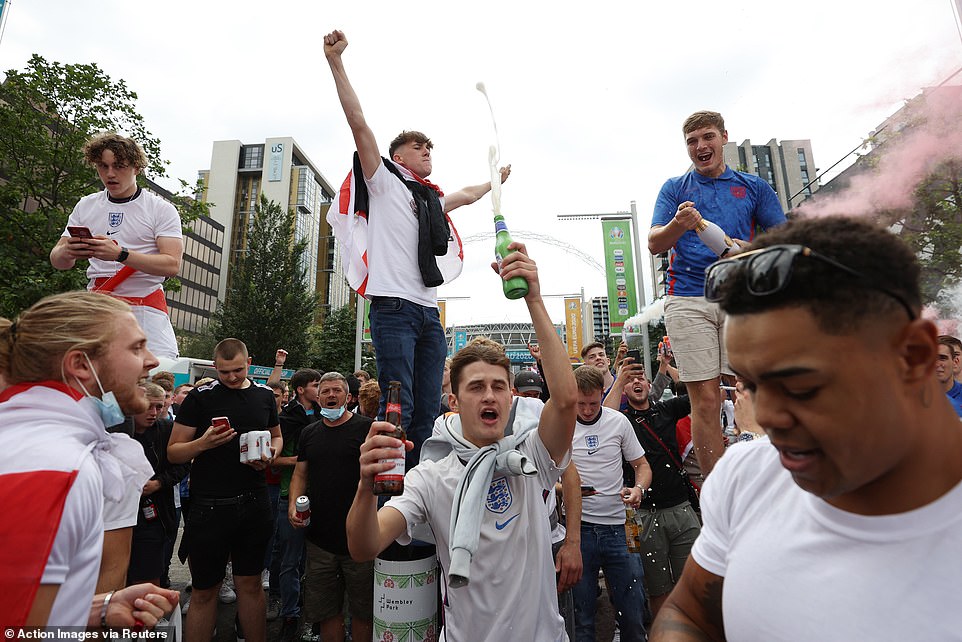 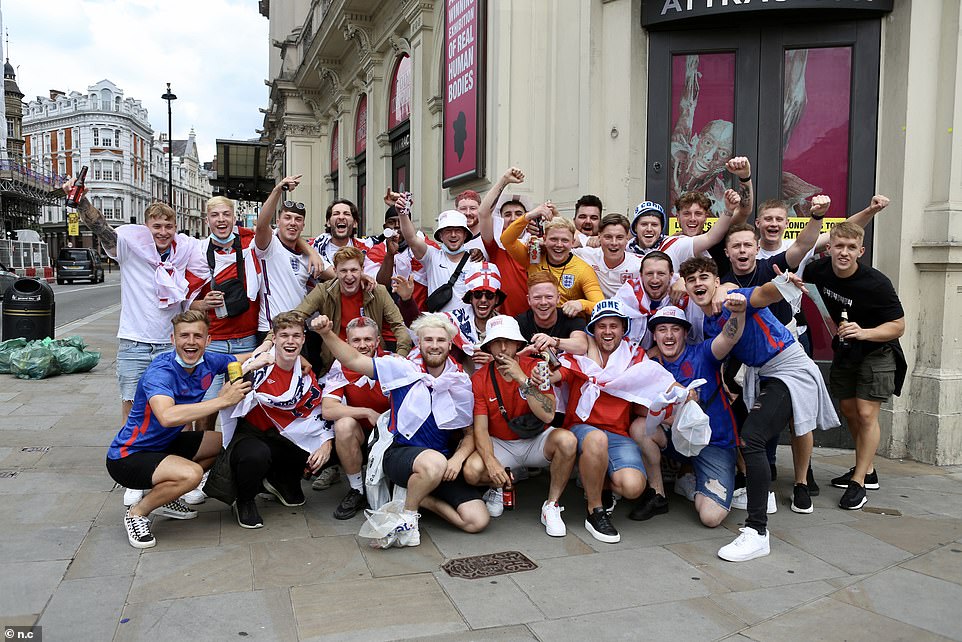 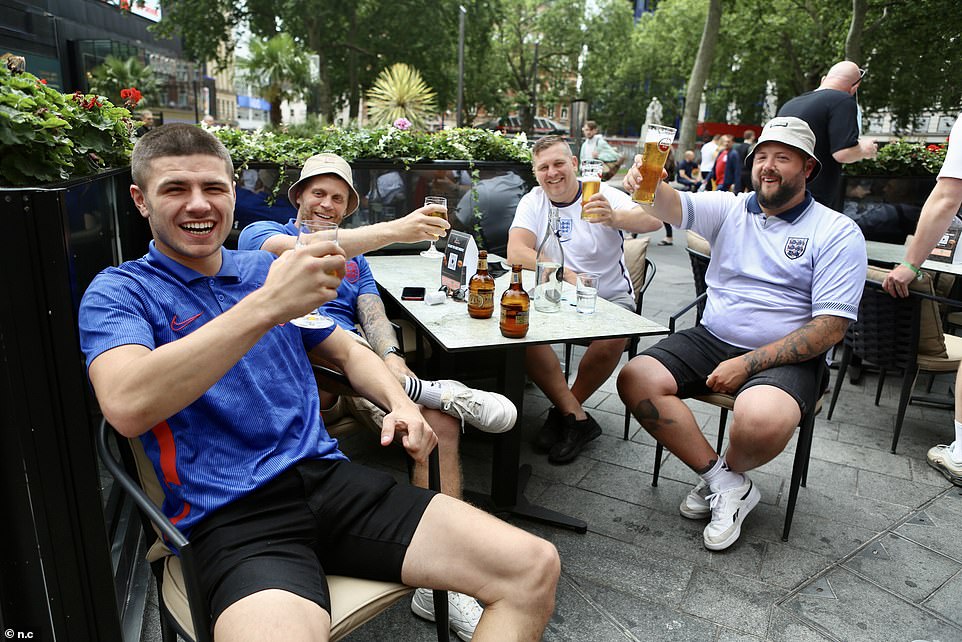 England supporters in central London drinking this morning, ahead of the Three Lions’ historic Euro 2020 final against Italy at Wembley 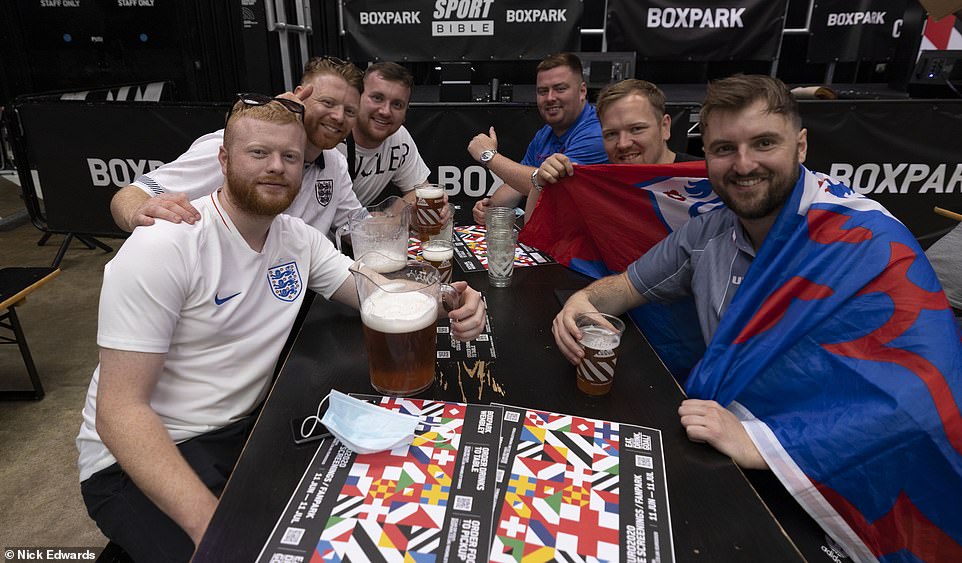 England fans at BOXPARK Wembley, where England will later play Italy in the Euro 2020 final

A four-day bank holiday in August could be declared if England win the European Championships tonight.

Britons could be granted another reason to cheer on the Three Lions as they face off against Italy at Wembley, as reports suggest a victory could mean extra time off in August.

A petition calling for the bank holiday has already topped 350,000 signatures.

Friday August 27 is thought to be the most likely option for the additional day off because it would align with the summer bank holiday on the following Monday, The Telegraph reports.

A source said the potential four-day weekend would spark an economic boost as more Britons would be able to take mini-breaks before schools go back for the next academic year.

He appeared to be crossing his fingers for victory while at Wimbledon yesterday, where he and his wife Kate Middleton attended the grand slam to watch Australia’s Ashleigh Barty win the tennis Championship in an epic three-set final against Karolina Pliskova.

The FA president said: ‘Gareth, Harry and to every member of the England team on and off the pitch, just want to wish you the very best of luck tonight. What a team performance it’s been, everyone in the squad has played their part. All the backroom team as well have been truly essentially.

‘The whole country is behind you. So, bring it home.’

The duke’s grandmother the Queen paid tribute to the ‘spirit, commitment and pride’ of the squad in a good luck message. In her written message, the monarch recalled presenting the Jules Rimet trophy to Bobby Moore after England beat then West Germany in the World Cup – almost six decades ago.

She said: ‘Fifty-five years ago I was fortunate to present the World Cup to Bobby Moore and saw what it meant to the players, management and support staff to reach and win the final of a major international football tournament.

‘I want to send my congratulations and that of my family to you all on reaching the final of the European Championships, and send my good wishes for tomorrow with the hope that history will record not only your success but also the spirit, commitment and pride with which you have conducted yourselves.’

Prime Minister Boris Johnson Southgate and the players they had ‘already made history’ by reaching the final, writing: ‘You have lifted the spirits of the whole country, and tomorrow we know you can lift that trophy too. We are not just hoping or praying.

‘We believe in you, Gareth, and your incredible squad.’

Millions of England fans will be sporting reds, whites and blues in their living rooms and in pubs across the country, with 60,000 supporters expected to cheer on Gareth Southgate’s men at Wembley in the side’s first major final since the 1966 World Cup win.

The Queen, Prince William and Prime Minister Boris Johnson have all showered the Three Lions in praise, while thousands of England supporters urge the side to ‘bring it home’ on Twitter – with some fans revealing they have been so excited that they did not sleep last night.

The British Beer & Pub Association predicts England fans will buy 7.1 million pints on Sunday, while over the weekend an estimated £750million is expected to be withdrawn from cash machines – up 12 per cent on the same period a year earlier, according to ATM network Link. 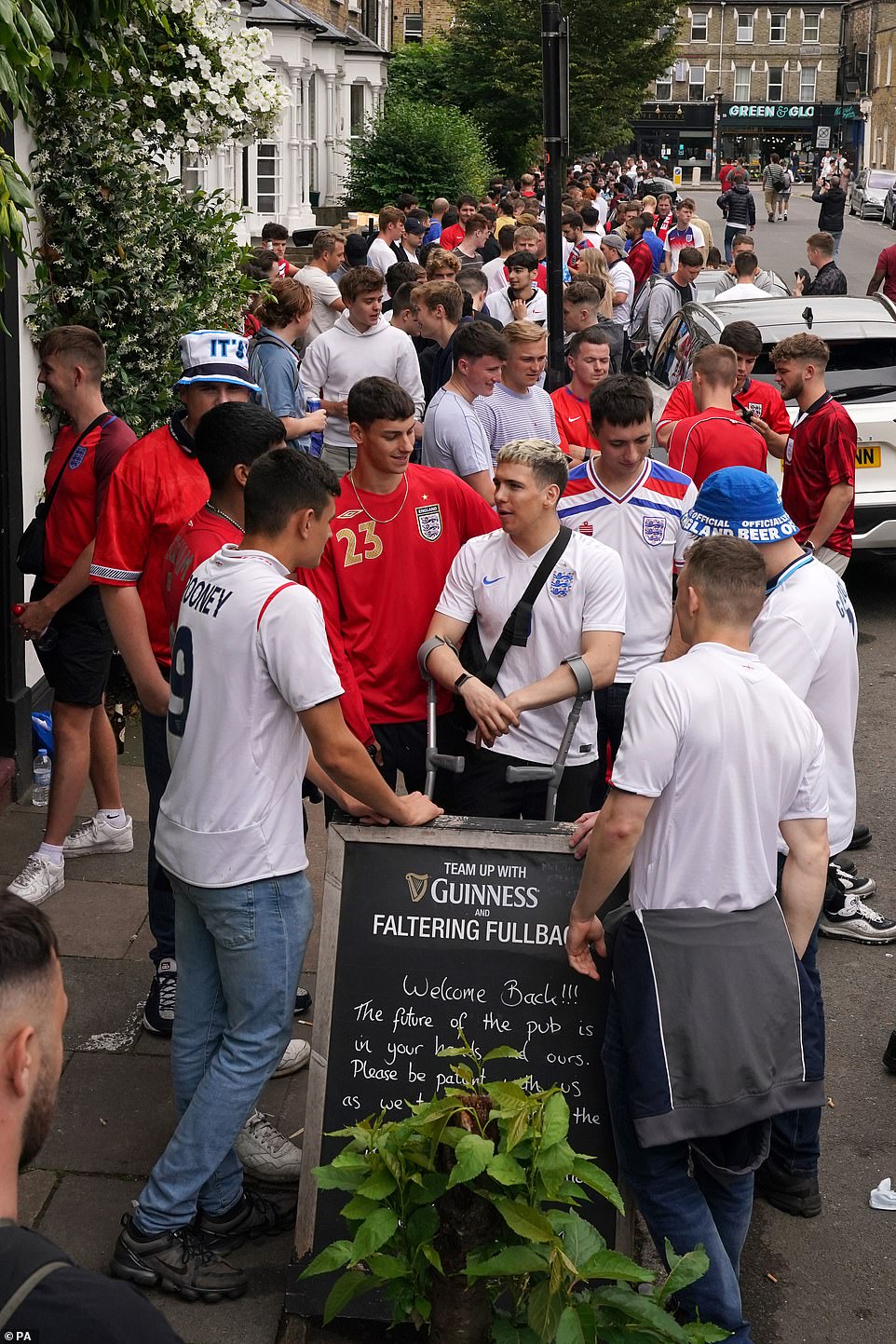 England fans queuing outside the The Faltering Fullback pub in Finsbury Park, London 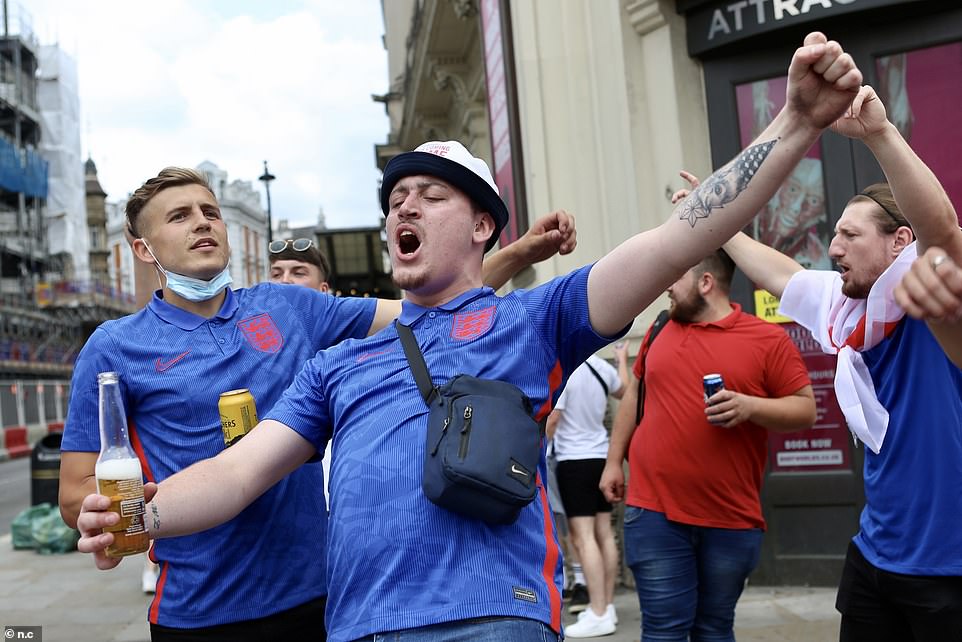 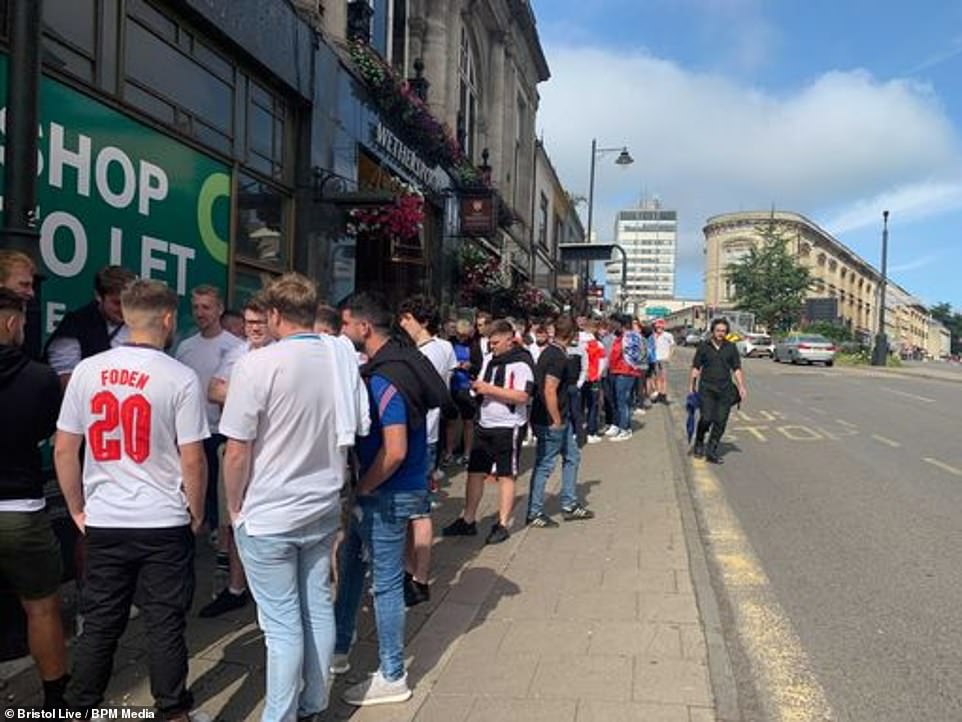 From 10am, fans were out in Bristol in their thousands. At Allstars Sports Bar, there was a queue of around 400 lining up 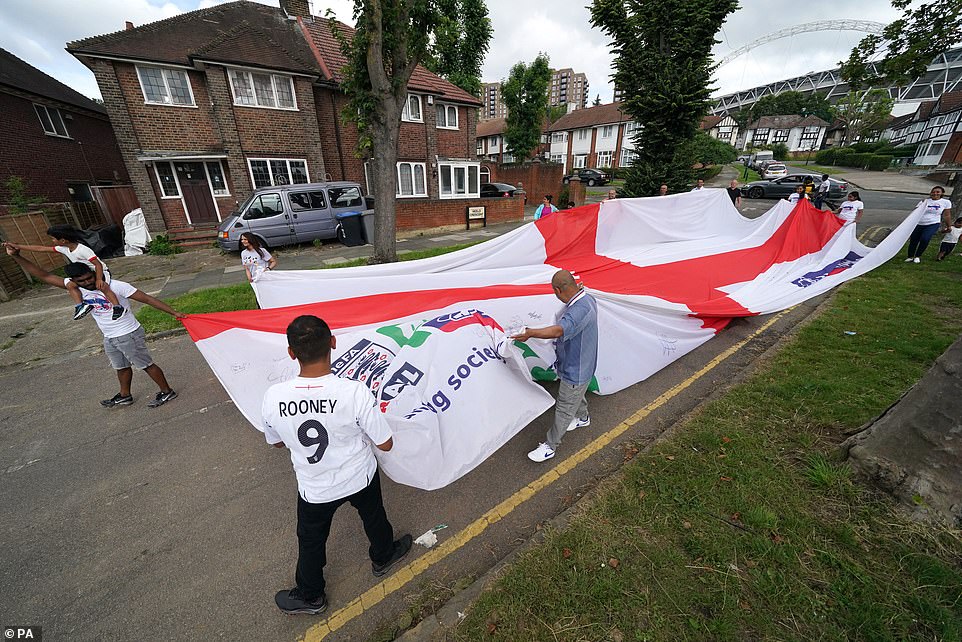 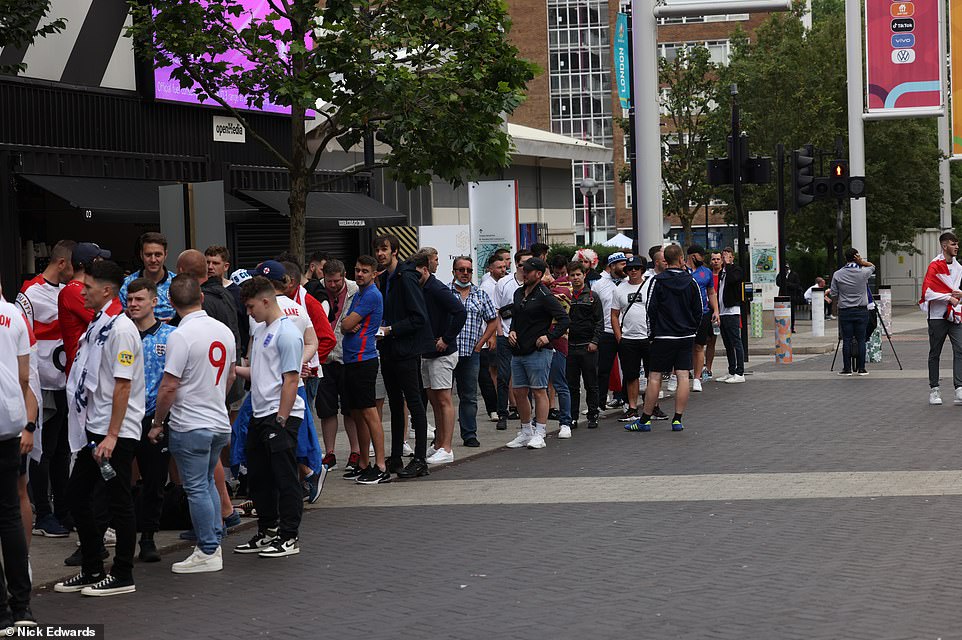 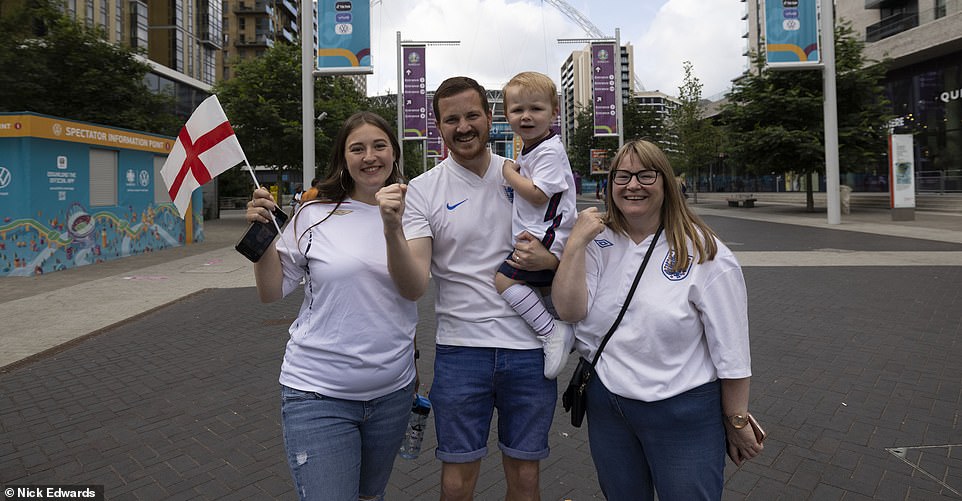 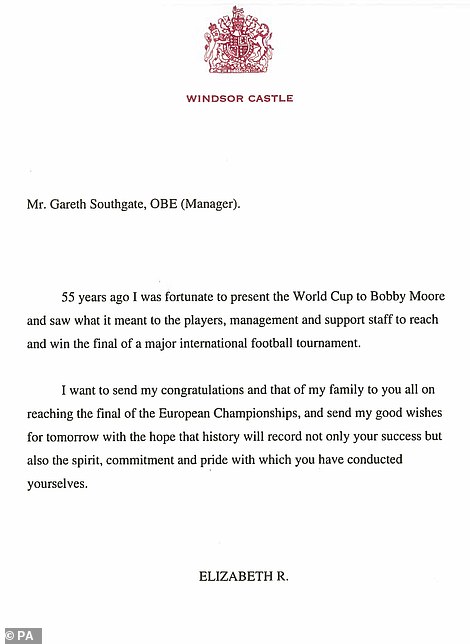 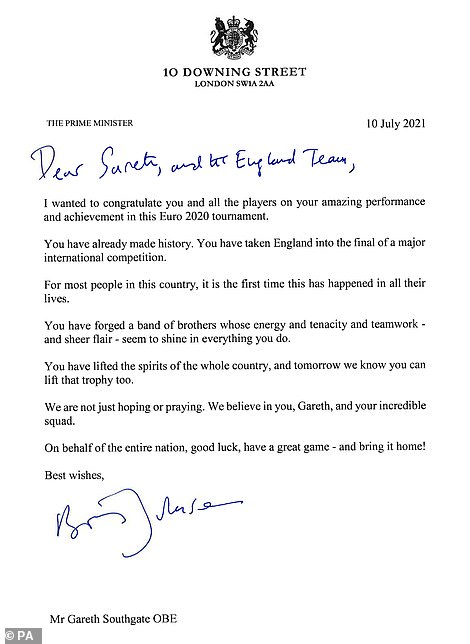 The Queen (left) congratulated Gareth Southgate and the England players for reaching the Euro 2020 final and praised their ‘spirit, commitment and pride’, while Boris Johnson praised the ‘band of brothers’ (right)

In a welcome economic boost, by the end of the competition, it is estimated that £815million will have been spent in pubs and hospitality venues, with 32.6 million pints sold, a report by Vouchercodes.co.uk and the Centre for Retail Research (CRR) said.

A number of schools have already said they will allow pupils to start later on Monday if they wish to and some employers are considering letting staff enjoy a celebratory – or consolatory – lie-in after what could be a very late night.

The final – which is expected to attract a record television audience of 35 million – is due to kick off at 8pm and will finish by 10pm if it ends in normal time, but could end closer to 11pm if there is extra time or a penalty shootout.

The official England Twitter account posted this morning: ‘A matchday like no other’ – sparking a flurry of excited and anxious messages. One expectant fan wrote: ‘Massive day ahead, first final for @England in my lifetime. Wherever you’re watching it, whatever your plans are, enjoy! Proud of the squad and what they’ve done so far, but they can lift that trophy!’

Another said: ‘Today is the day! The sun’s out, enjoy it, embrace it, soak up the atmosphere!! The excitement, the nerves, the butterflies in the stomach. Go mad!! Who knows when or if this day will come again! #ItsComingHome’.

One tweeted: ‘Been up since 5am cos of today. Couldn’t sleep at all! C’mon @England #ItsComingHome #ENG’ – with another writing on Twitter: ‘Morning everyone, anybody got any sleep last night or feeling nervous ahead of #ITAENG #ItsComingHome Come on #ENG @England’.

Across England, fans have been savouring the run-up to a game that could see the country crowned champions of Europe. Houses have been bedecked with flags amid a surge in demand for England-themed paraphernalia and the Shard in London was lit up in the team colours.

Residents on Wales Street, in Oldham, Greater Manchester have even patriotically renamed their road in honour of the Three Lions – England Street, with a new red-and-white sign erected above the original.

A good luck message from David Baddiel, Frank Skinner and the Lightning Seeds – who are behind the anthemic Three Lions (Football’s Coming Home) – has been projected onto the white cliffs of Dover ahead of the match.

London’s transport network will display digital well wishes across the capital, visible at Tube stations, the DLR and London Overground as well as at bus stops and on road traffic alert signs.

Kane said his team hopes to do the nation proud in their bid for Euro 2020 glory. He told reporters at a press conference last night: ‘We want to go and bring the trophy home’ – adding: ‘We know how much it means to the English fans all over the country so we’re proud to be representing them and hopefully we can do them proud again.’ 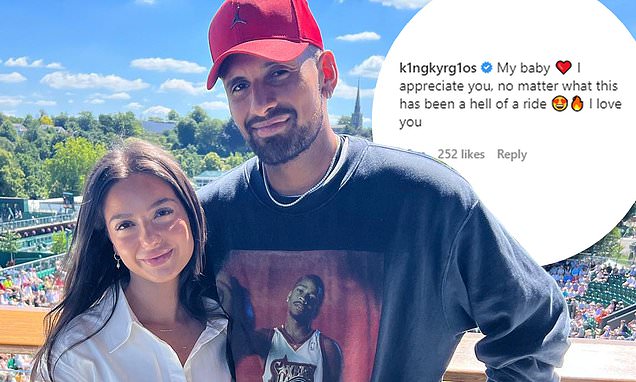