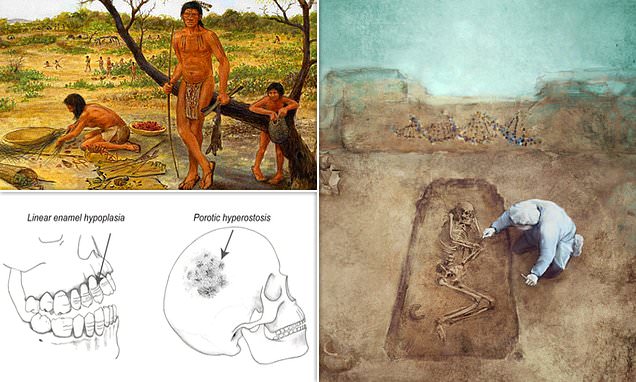 Farming made our ancestors SHORTER! Switch from hunter-gatherer lifestyles to crops 12,000 years ago took an average 1.5 inches off their height, study finds

Our ancestors got shorter when they made the switch from foraging to farming 12,000 years ago, a new study shows.

An international team of researchers has analysed DNA and taken measurements from skeletal remains of 167 ancient individuals found around Europe.

The bones had already been dated to either before, after or around the time when farming emerged in Europe 12,000 years ago.

A switch from hunter-gatherer lifestyles to farming crops took an average 1.5 inches off their height, the experts found.

Shorter height is an indicator of poorer health, they say, because it suggests they were not getting enough nutrition to support proper growth.

Other skeletal ‘stressors’ that the farmers may have experienced include ‘lorotic hyperostosis’, characterised by areas of spongy or porous bone tissue in the skull. 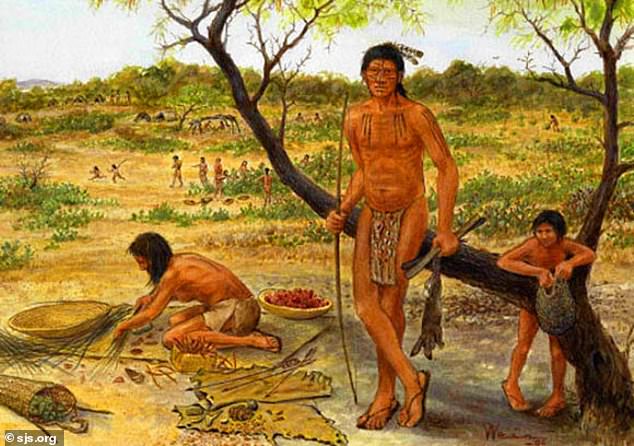 Human culture, biology and health were shaped dramatically by the onset of agriculture around 12,000 years ago, the researchers say. Depicted are some of the first European farmers

This included preagricultural individuals, the earliest farmers and subsequent farmers.

Heights steadily increased through the Copper (0.77 inch), Bronze (1.06 inch) and the Iron (1.29 inch) ages with respect to Neolithic heights.

Recent studies have tried to work out the effect of DNA on height, Professor Marciniak said, but her new study also included measuring the bones of ancient individuals, as well as genetic contributions.

‘We started thinking about the longstanding questions around the shift from hunting, gathering and foraging to sedentary farming and decided to look at the health affect with height as a proxy,’ she said.

‘Our approach is unique in that we used height measurements and ancient DNA taken from the same individuals.’

The switch from a hunting, gathering and foraging lifestyle to a settled agricultural lifestyle did not occur across Europe simultaneously, but in different places at different times.

According to Encyclopaedia Britannica,  starting around 9,000 years ago in Greece, farming economies were progressively adopted in Europe, though areas farther west, such as Britain, were not affected for another 2,000 years and Scandinavia not until even later.

For their study, the researchers studied 167 deceased individuals whose remains were found around Europe – 67 females and 100 males. 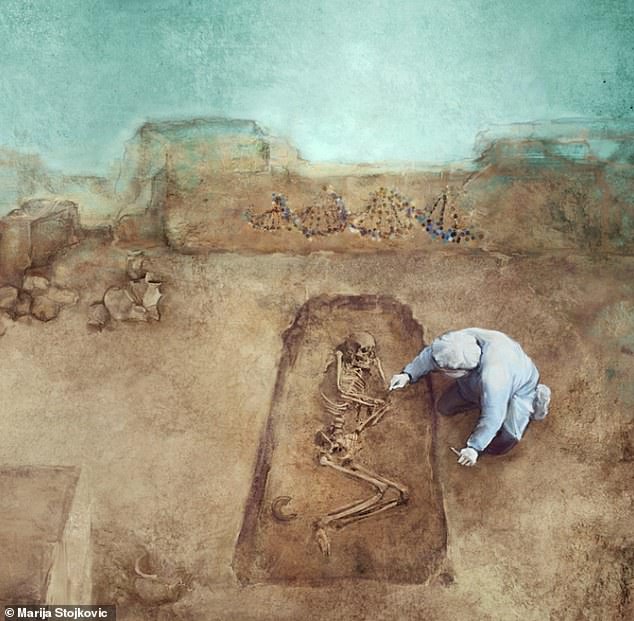 A switch from primarily hunting, gathering and foraging to farming about 12,000 years ago in Europe may have had negative health effects as indicated by shorter than expected heights in the earliest farmers. Depicted here is a scientist working with human skeletal remains and ancient DNA

Bronze Age people retained and curated human remains as relics, and keep them for several generations, a 2020 study found.

Among the discoveries were a range of items either carved from human bones or bones belonging to someone else buried much later – likely kept as relics.

The discovery has helped researchers paint a more detailed picture of death customs of the time – with some ‘seemingly macabre’ to modern eyes.

The sample included preagricultural individuals (those who had to hunt and forage), the earliest farmers and subsequent farmers.

The researchers used long bones of skeletal remains that were also being sampled or already been sampled for ancient DNA testing by other researchers.

Even if the bones were fragmented, identifying what part of the body they were from and measuring them allowed the team to make estimates of an individual’s overall height.

Researchers then created a model that used adult height, indicators of stress seen in the bones, ancient DNA, and genetic indications of ancestry.

They also found that heights steadily increased through the Copper (0.77 inch), Bronze (1.06 inch) and the Iron (1.29 inch) ages with respect to Neolithic heights.

However, these results were attenuated when the team additionally accounted for variation in genetic ancestry.

For example, some of the individuals could have been taller not because of their environment such as working conditions, but because they inherited being tall from their own ancestors.

According to the study authors, 80 per cent of height is from genetic makeup and 20 per cent is from the environment.

‘There was movement of people, generally from east to west,’ Professor Marciniak said. ‘We wanted to account for that migration that perhaps brought different proportions of height-associated genetic variants.’

Drawings of skeletal indicators of non-specific stress evaluated in the study. Porotic hyperostosis is a condition that affects bones of the skull vault, characterised by areas of spongy or porous bone tissue. Linear enamel hypoplasia is a failure of the tooth enamel to develop; cribra orbitalia refers to porotic lesions of the skull

When the team incorporated ancestral information, they found that the height decrease was reduced a bit so that it was not as extreme, although the height drop around the start of the era of farming was still evident.

‘Our work represents a snapshot of something that is very dynamic and very nuanced,’ she said.

‘We need to do more to see what is the cause of the decrease in achieved height versus predicted genetic height during the shift to farming.’

The researchers said they believe that their approach is adaptable to studies of past human health and could be applied in other contexts.

The study has been published in the journal the Proceedings of the National Academy of Sciences.

It was a time when sophisticated bronze tools, pots and weapons were brought over from continental Europe.

Skulls uncovered from this period are vastly different from Stone Age skulls, which suggests this period of migration brought new ideas and new blood from overseas.

Bronze is made from 10 per cent tin and 90 per cent copper, both of which were in abundance at the time.

Crete appears to be a centre of expansion for the bronze trade in Europe and weapons first came over from the Mycenaeans in southern Russia.

It is widely believed bronze first came to Britain with the Beaker people who lived about 4,500 years ago in the temperate zones of Europe.

They received their name from their distinctive bell-shaped beakers, decorated in horizontal zones by finely toothed stamps.

The decorated pots are almost ubiquitous across Europe, and could have been used as drinking vessels or ceremonious urns.

Believed to be originally from Spain, the Beaker folk soon spread into central and western Europe in their search for metals.

Textile production was also under way at the time and people wore wrap-around skirts, tunics and cloaks. Men were generally clean-shaven and had long hair.

The dead were cremated or buried in small cemeteries near settlements.

This period was followed by the Iron Age which started around 650 BC and finished around 43 AD.