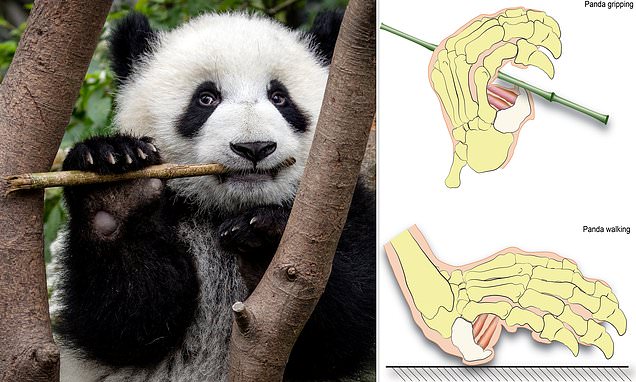 Pandas have been munching bamboo for six MILLION years! Fossil evidence reveals the bear’s ancestors also had a thumb-like ‘sixth digit’ to grip their favourite food

They are famed for lazily chomping down on bamboo.

And now it turns out that pandas may have been eating their favourite snack for far longer than scientists first thought, after new fossil analysis suggested that their ancestors did the same millions of years ago.

Researchers found that the ancestors of giant pandas were also equipped with a thumb-like ‘sixth digit’, used today by modern bears to help them grip the plant.

They said the discovery indicates that the panda’s dedicated bamboo diet may have originated at least six million years ago.

In addition to five digits on their hands, modern giant pandas — Ailuropoda melanoleuca — have an enlarged wrist bone called a radial sesamoid which they use to manipulate bamboo.

Previous research documented evidence of the thumb-like structure to just 100,000 to 150,000 years ago.

But now new fossil analysis by the Natural History Museum in Los Angeles suggests this feature was also present on the ancestral panda genus Ailurarctos during the late Miocene period.

It is the earliest evidence of the appendage by more than 5.8 million years. 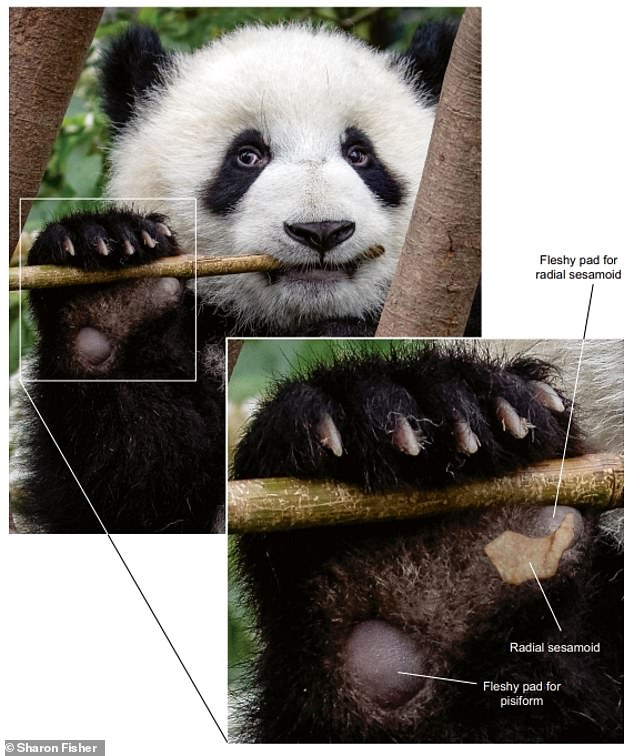 Giant panda gripping and chewing a thick, dried bamboo stem at Chengdu Research Base of Giant Panda Breeding in 2016. Inset: a semitransparent radial sesamoid bone is placed at its approximate position inside the fleshy pad 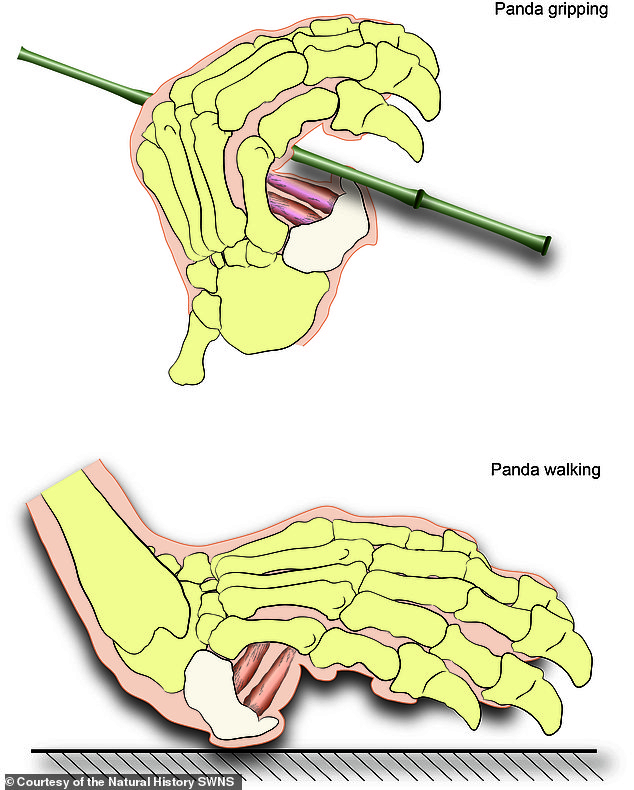 Modern panda gripping vs walking. The white bone is their false thumb.  The researchers suggest that the hook may help modern pandas to better grasp bamboo, while the short length and flattened outer surface may assist with weight distribution when walking

Pandas live mainly in temperate forests high in the mountains of southwest China, where they subsist almost entirely on bamboo.

They must eat around 26 to 84 pounds of it every day, depending on what part of the bamboo they are eating.

They use their enlarged wrist bones that function as opposable thumbs.

These bears are excellent tree climbers despite their bulk.

Palaeontologist Professor Xiaoming Wang said: ‘Deep in the bamboo forest, giant pandas traded an omnivorous diet of meat and berries to quietly consuming bamboos, a plant plentiful in the subtropical forest but of low nutrient value.

‘Tightly holding bamboo stems in order to crush them into bite sizes is perhaps the most crucial adaptation to consuming a prodigious quantity of bamboo.’

Professor Wang’s team examined the wrist bone of an individual from the ancestral panda genus Ailurarctos.

The specimen was discovered at Shuitangba, a site near the city of Zhaotong in China which dates back to the late Miocene period around six to seven million years ago.

They compared the shape and size of the wrist bone to previously published information on the radial sesamoids of modern giant pandas.

It was also studied next to the wrist bone of the Indarctos arctoides — an ancient bear that lived nine million years ago and may share the same common ancestor as giant pandas.

However it did not resemble that of I. arctoides, which was larger, wider and more hooked.

Researchers said this indicates that the digit, and a dedicated bamboo diet, has been present in the panda lineage for at least six million years. 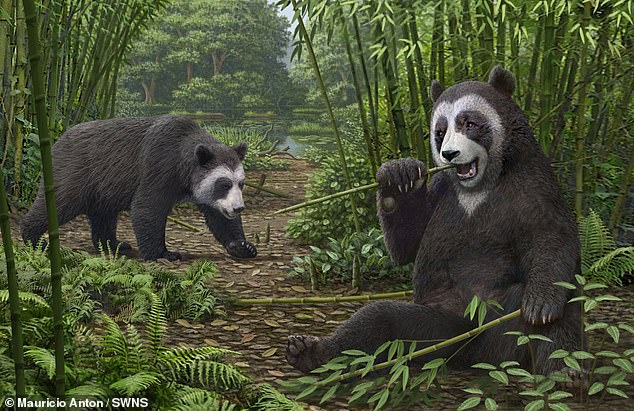 An artist reconstruction of Ailurarctos from Shuitangba. The grasping function of its false thumb (shown in the right individual) has reached to the level of modern pandas, whereas the radial sesamoid may have protruded slightly more than its modern counterpart during walking (seen in the left individual)

Modern giant panda’s left hand (A and C) compared to the left radial sesamoid of a Ailurarctos specimen (B and D). While the bamboo-gripping digits in modern pandas and the Ailurarctos are similar, there are some key differences in its size and shape 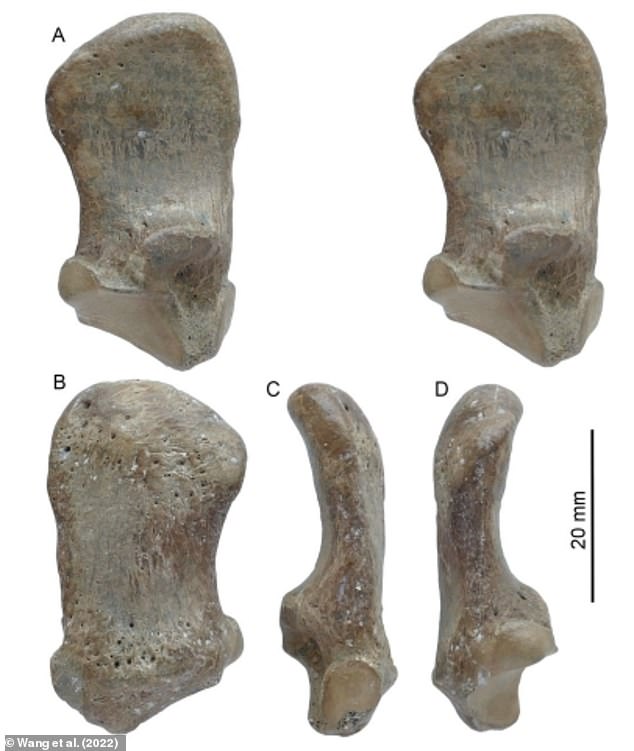 Images of the Ailurarctos’s left radial sesamoid. These indicate that the digit, and a dedicated bamboo diet, has been present in the panda lineage for at least six million years

While the bamboo-gripping digits in modern pandas and the Ailurarctos are similar, there are some key differences in its size and shape.

Professor Wang said: ‘The modern giant panda’s digit significantly shorter than Ailurarctos’s in relation to its body size and has a hook on the end of it and a flattened outer surface, while Ailurarctos’s does not.’

The researchers suggest that the new hook may help modern pandas to better grasp bamboo, while the shorter length and flattened outer surface may assist with weight distribution when walking.

They said that the weight-bearing constraints could be the main reason that the giant panda’s thumb-like structure never evolved into a full, opposable thumb.

Project co-leader Dr Denise Su, of the Institute of Human Origins at Arizona State University, said: ‘Five to six million years should be enough time for the panda to develop longer false thumbs, but it seems that the evolutionary pressure of needing to travel and bear its weight kept the “thumb” short-strong enough to be useful without being big enough to get in the way.’ 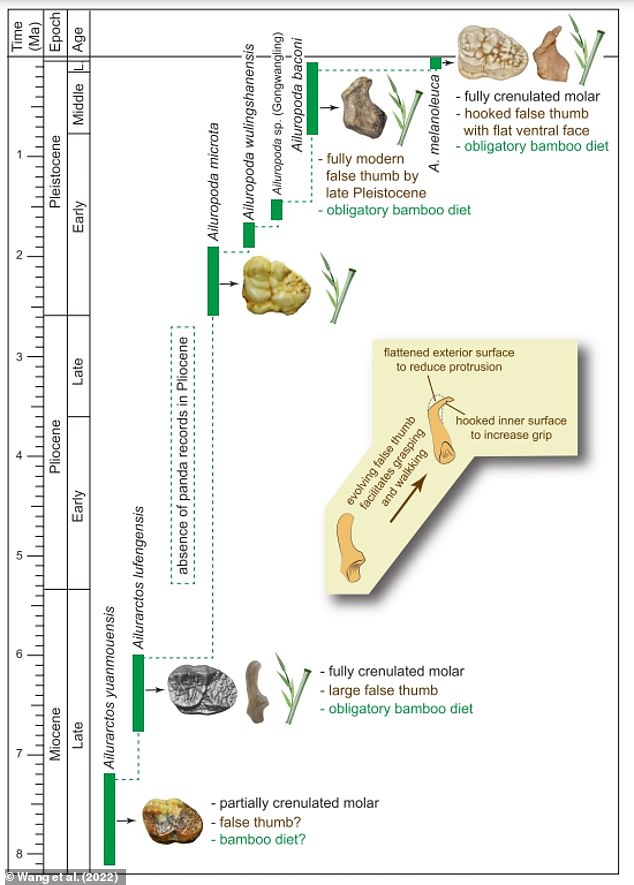 Evolution of the false thumb in the giant panda. Researchers have found that the modern giant panda’s thumb-like structure has the same distinctive shape as six million-year-old Ailurarctos’s wrist bone. However it did not resemble that of the nine million-year-old I. arctoides, which was larger, wider and more hooked

While the false thumb in living giant pandas has been known for more than 100 years, how it evolved was not understood because of a near-total absence of fossil records.

Professor Wang said: ‘Panda’s false thumb must walk and “chew”. Such a dual function serves as the limit on how big this “thumb” can become.

‘Evolving from a carnivorous ancestor and becoming a pure bamboo-feeder, pandas must overcome many obstacles.

‘An opposable “thumb” from a wrist bone may be the most amazing development against these hurdles.’

Why giant pandas are black and white: Bears evolved distinctive markings to help them camouflage

With its black and white markings and cuddly face, the giant panda is one of the most distinctive creatures in the animal kingdom.

Now, researchers have uncovered why giant pandas evolved to have these unique colourings – and it’s all to do with camouflage.

Experts from the University of Bristol used state-of-the art image analysis techniques on rare photos of giant pandas in their natural environments to understand why they have evolved to have these markings.

The analysis revealed that the black patches blended in with dark shades and tree trunks, while the white patches match foliage and snow.

Meanwhile, pale brown tones blend in with the ground colour, according to the team. 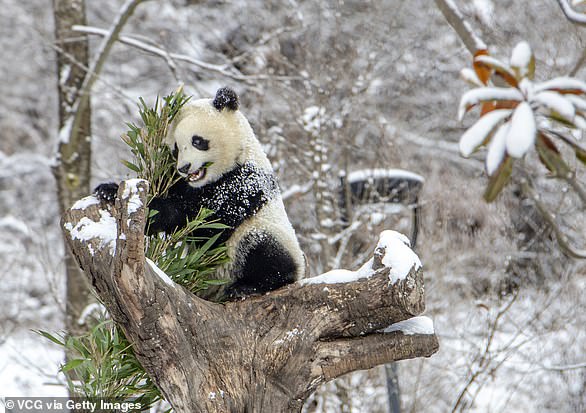 Experts from the University of Bristol say that the dark patches help pandas to blend in with tree trunks, while their lighter patches allow them to camouflage against patches of snow