FRANK FUREDI: Are some schools turning into anti-Tory factories? 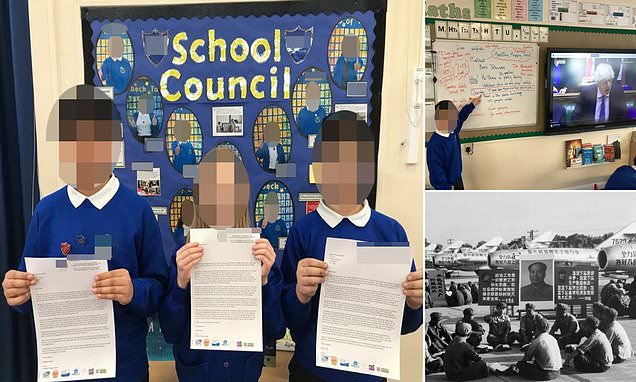 Is this picture proof some schools are turning into anti-Tory indoctrination factories? The main interest of teachers should be the education of children… but too many behave more like political commissars, writes sociology professor FRANK FUREDI

The image in the Daily Mail yesterday was truly disturbing.

As an educator for 45 years, I’d be hard pressed to come up with something as shocking as that picture of a primary school pupil scowling at a whiteboard on which the words ‘lies’, ‘selfish’ and ‘mistrust’ were scrawled above ‘Boris Johnson‘.

It was like something out of Maoist China — children being made to parrot or endorse political messages.

The writing was clearly that of an adult — presumably the teacher who had got the pupil to pose for the photograph, which was then proudly tweeted on the Twitter account of Welbeck Primary School in Nottingham.

The school also tweeted pictures of pupils holding up letters addressed to the local Labour MP, captioned: ‘Year 6 pupils have written to Lilian Greenwood regarding how angry they are with the Prime Minister for the allegations he broke lockdown rules and his continued lying to Parliament.

‘Their trust in politicians has been damaged.’ 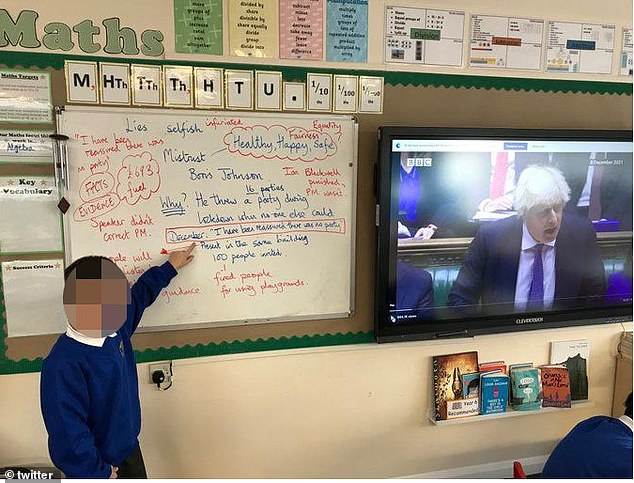 The image in the Daily Mail yesterday was truly disturbing. As an educator for 45 years, I’d be hard pressed to come up with something as shocking as that picture of a primary school pupil scowling at a whiteboard on which the words ‘lies’, ‘selfish’ and ‘mistrust’ were scrawled above ‘Boris Johnson’, writes FRANK FUREDI

And there was an online letter apparently written by a ten-year-old — something of a prodigy, I would suggest, given the maturity of the language — that included unemployment figures and quotes from ‘PMQs’.

It called Mr Johnson a ‘hypocrite’ who ‘can no longer be trusted as our leader and should resign.’

Many parents are understandably appalled. ‘It is wrong. Children at that age are heavily influenced by teachers. It’s a form of indoctrination,’ one complained.

And he or she is absolutely right. Some — not all — teachers are turning classrooms into indoctrination factories.

The main interest of teachers should be the education and intellectual development of children. But too many of them behave more like political commissars than educators.

I am no fan of Boris Johnson and believe it is legitimate to criticise his behaviour. I also agree pupils should be encouraged to think about politics, to articulate their views and be exposed to the views of others.

Robust discussion is part of a healthy democracy and schools must prepare children to play their part in that.

If, for example, after a discussion about the pros and cons of this Government, half the class had been asked to criticise the PM and half to defend him, that would have been legitimate, albeit a tall order for ten-year-olds. 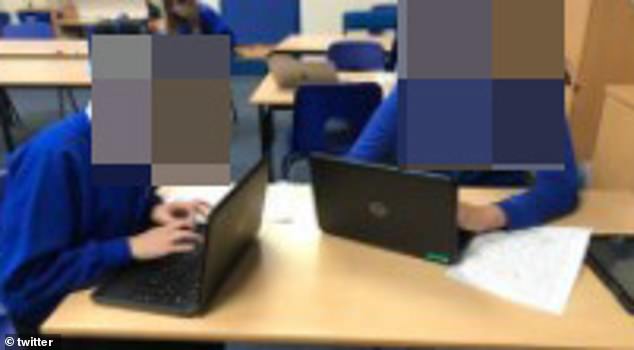 Since when has turning pupils into mouthpieces for their teachers’ views been in the job description? The classroom is no place for party political broadcasts

Generally, only those aged 14 and above have the capacity for critical thinking crucial to meaningful debate.

But at Welbeck School, it seems pupils were encouraged to adopt the party line. Head teacher Rebecca Gittins made her Left-wing leanings clear via her Twitter feed and used the phrase ‘Tory Scum’ in now-deleted tweets.

Since when has turning pupils into mouthpieces for their teachers’ views been in the job description? The classroom is no place for party political broadcasts.

Of course our teachers are free to hold any political views and loyalties they wish, but it is utterly unprofessional and highly damaging to publicise them, as it is alleged Rebecca Gittins did.

A head teacher personifies the school, so he or she should not publicise partisan views, nor use such incendiary language. What message does it send?

That anyone who disagrees with the head teacher’s chosen ideology is ‘scum’ and not welcome?

Sadly, this is just the latest — albeit blatant — example of how too many teachers prioritise their interests and ideology over their pupils’ learning and wellbeing.

Yes, there are countless dedicated teachers who are careful not to let their own views leak into lessons.

Their pupils remain blissfully ignorant of how they vote or what they think about controversial subjects such as Black Lives Matter or gender identification. 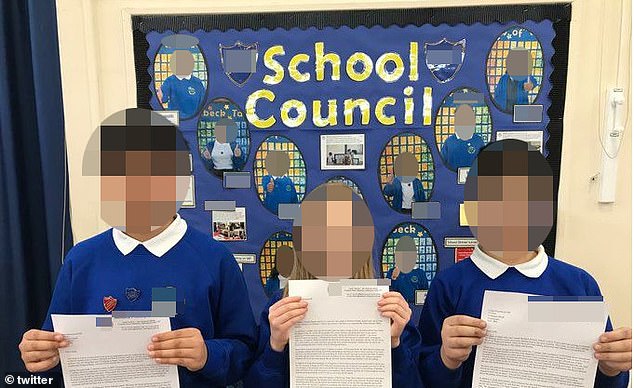 The writing was clearly that of an adult — presumably the teacher who had got the pupil to pose for the photograph, which was then proudly tweeted on the Twitter account of Welbeck Primary School in Nottingham

But in researching my book about the culture wars, I talked to many who despair at the behaviour of some of their colleagues.

Teachers with profound Left-wing sympathies are nothing new.

The annual National Union of Teachers conference (the NUT is now part of the education union NEU) was renowned for anti-Tory invective. But the degree to which those sympathies are infecting our schools is new and terrifying.

In that respect, the pandemic did parents something of a favour. It opened their eyes to what was really going on when they listened to their children’s Zoom lessons.

One parent told me: ‘I was shocked when I heard my daughter’s teacher drone on about white privilege’. The children were warned that they might be ‘subconsciously perpetuating it’.

‘White privilege’ is a highly controversial concept. To present is as fact to children aged six or seven is dishonest and wrong.

Another parent was furious when her eight-year-old said to her: ‘Mummy, maybe I’m a boy,’ after being taught gender-neutral ideology — the idea that biological sex is a matter of choice.

She complained to teachers but says they dismissed her concerns. Their views mattered, hers didn’t.

A recent document — a manifesto, essentially — by the NEU outlined its mission to ‘decolonise’ the curriculum.

Members are urged to become culture warriors who ‘train teachers and schools on whiteness, anti-racism, creating tools for critical self-reflection’ and make ‘white privilege and colonialism visible in schools’.

There are legitimate discussions to be had around Empire and its legacy, but to present a one-sided view promotes division and makes young children ashamed of their nation’s past and their culture.

Schools do have a role in instilling moral values such as a social conscience and personal responsibility.

The NEU, and Leftist teachers like Rebecca Gittens, need to focus on these concepts. 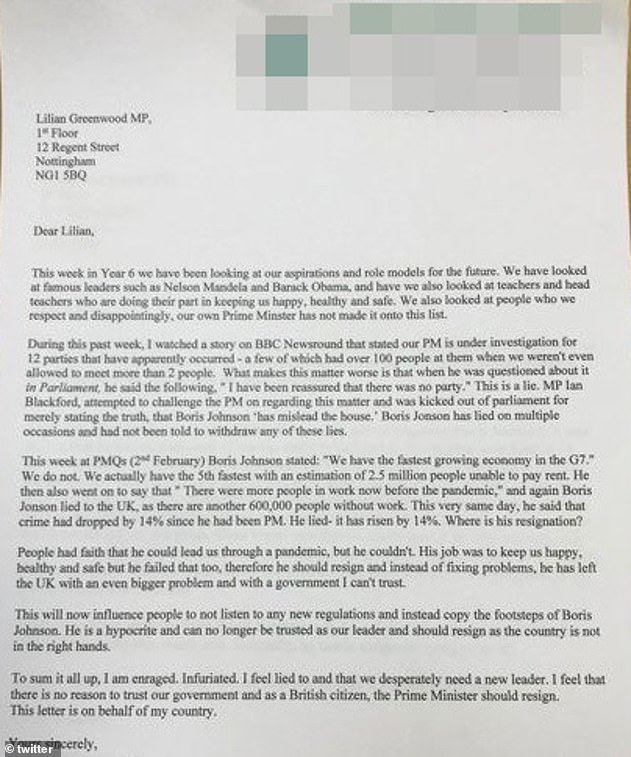 Pictured: One of the letters allegedly written by a year six pupil to the local Labour MP hitting out at the PM

But instead their mission seems to be to inculcate the next generation in ‘correct’ beliefs about gender, race and the environment, at the expense of actual knowledge.

They push their propaganda to children young and trusting enough to accept it as fact.

Indoctrinating young children in views antithetical to those held by many people creates division between children and their parents, and the wider community.

The pandemic also exposed the fact that the education of children is not always the priority of the teaching establishment.

In May 2020, Mary Bousted, the joint general secretary of the NEU, was recorded on Zoom showing breathtaking contempt for pupils as she outlined the union’s resistance to the Government’s back-to-school plans.

Pupils, she sneered, were ‘mucky, who spread germs, who touch everything, who cry, who wipe their snot on your trousers or on your dress’.

Perhaps Ms Bousted thinks teachers’ welfare is more important than that of pupils? 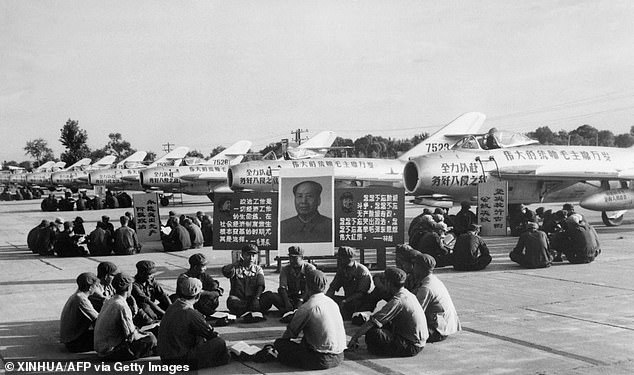 As for parents, their views are too often discounted. I know many who were rightly infuriated when some schools allowed children to participate in Extinction Rebellion protests.

I saw 80 or 90 young children being herded along by teachers to an XR demo, all shouting about ‘Net Zero’ and holding aloft pictures of Greta Thunberg.

Saving the planet is all very well but missing vital hours of education won’t help any child’s future prospects.

I urge parents to take a closer interest in what their children are being taught, and push back against attempted indoctrination.

As for Rebecca Gittens, she seems more interested in party politics than in education.

She should make way for a head teacher who puts pupils before ideology.

Frank Furedi is a professor of sociology and the author of 100 Years Of Identity Crisis: Culture War Over Socialisation. 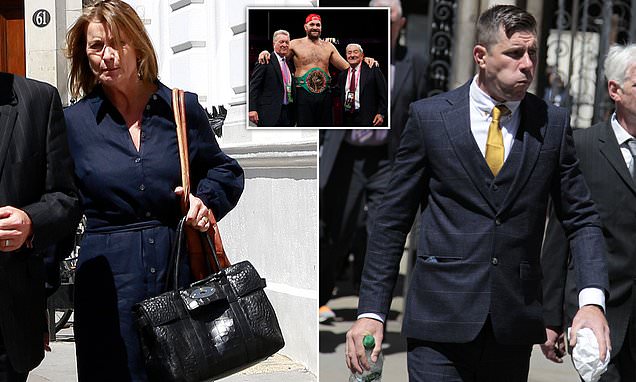 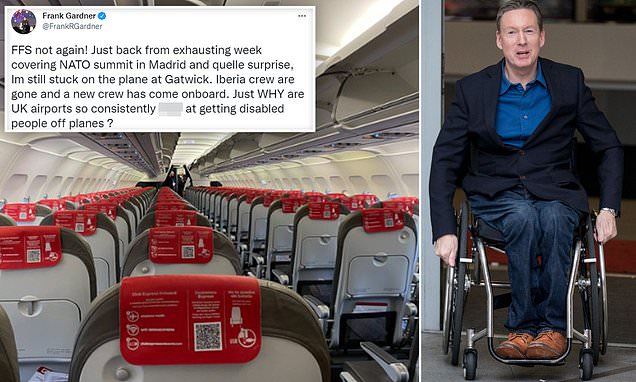 'FFS not again!' Disabled BBC journalist Frank Gardner is left stranded on empty plane at Gatwick for the FIFTH time as he slams UK airports for their 'consistently cr*p' treatment of wheelchair usersThe journalist, ... 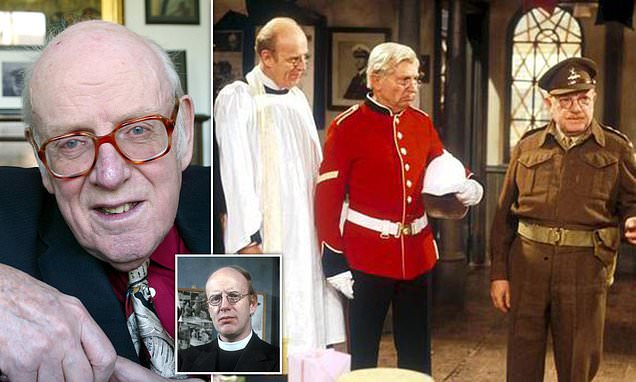