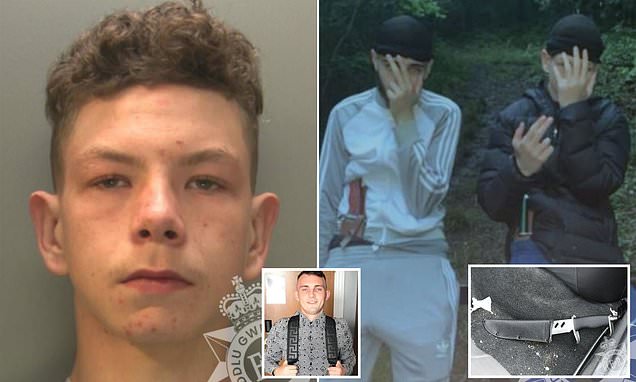 Teen gang member, 19, who posed with huge knives before innocent father-of-one, 26, was attacked and stabbed through the heart for his Gucci bag is jailed for eight years

A teenager who robbed a shopper of a designer Gucci bag in a murder attack was today jailed for eight years.

Ryan O’Connor, 26, was attacked for his ‘manbag’ on an evening trip to the shops by the drive-by gang armed with fierce blades.

His three killers were jailed for 58 years over Mr O’Connor’s death – and fellow gang member Ethan Strickland, 19, has now also been locked up.

Strickland – who posed with huge knives before the murder – was told he ‘encouraged’ Mr O’Connor’s killers with the robbery plot.

Joseph Jeremy, then 17, used a 15-inch hunting knife to kill Mr O’Connor – and laughed as he boasted: ‘I’ve yinged him.’ 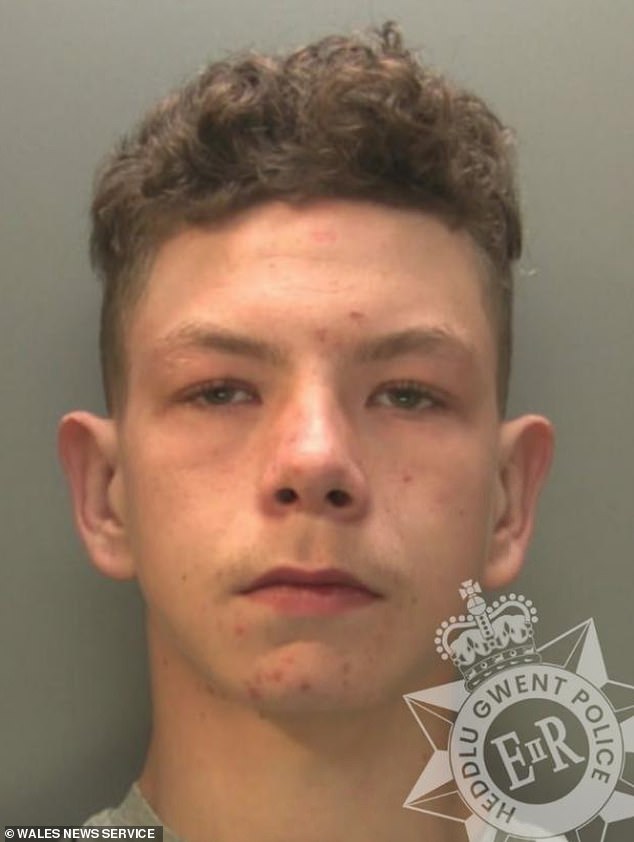 Ethan Strickland, 19, a gang member who posed with knives before the fatal stabbing of 26-year-old Ryan O’Connor in Cardiff, has been convicted of robbery and jailed for eight years 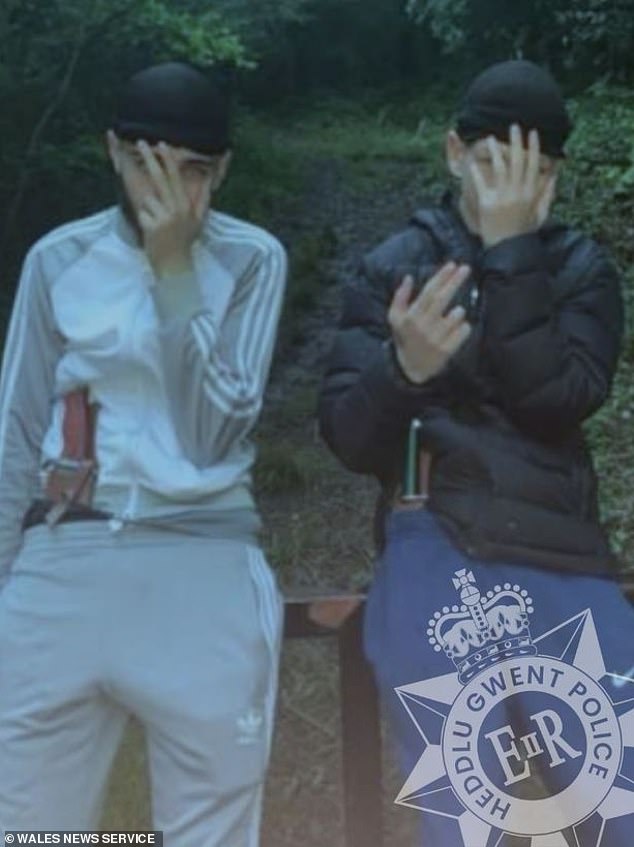 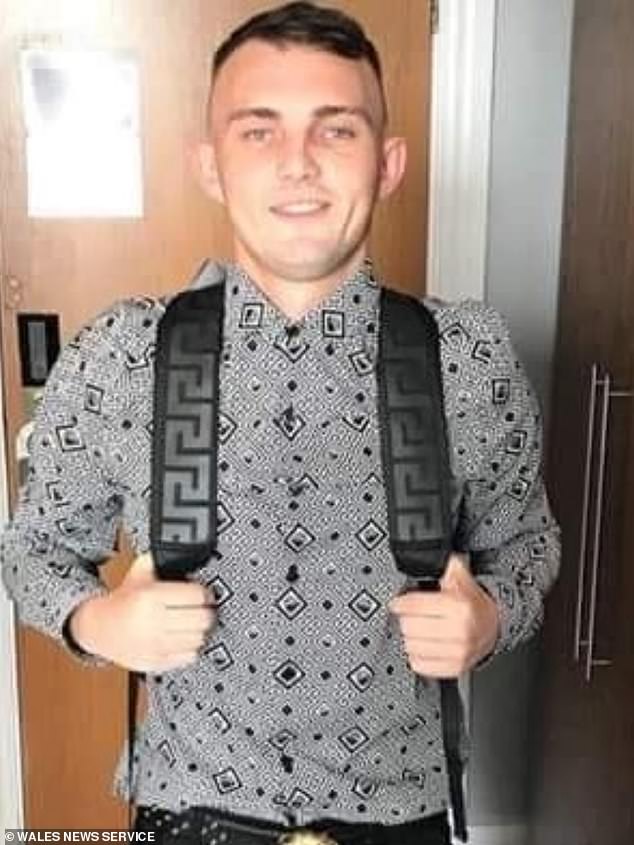 Ryan O’Connor, a 26-year-old father of one, was robbed of his Gucci ‘man bag’ and stabbed through the heart in a random drive-by robbery last year 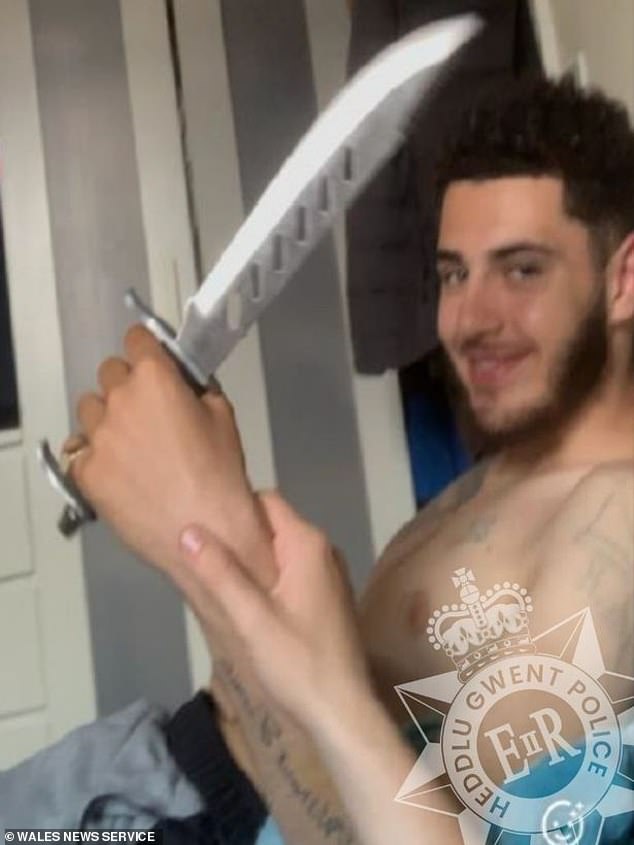 Kyle Raisis (pictured), 18, was convicted of manslaughter for his part in the robbery 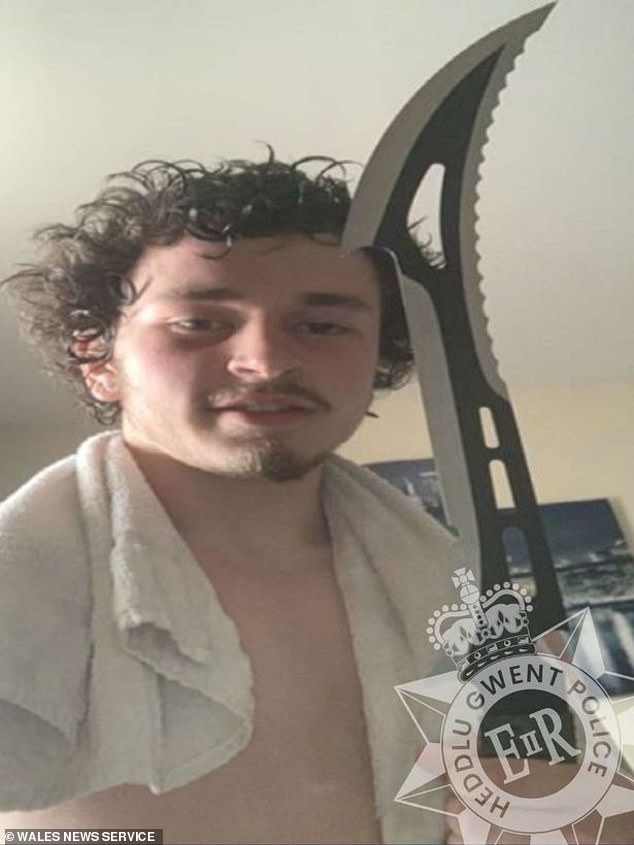 Joseph Jeremy (pictured), then 17, used a 15-inch hunting knife to kill Mr O’Connor – and laughed ‘I’ve yinged him’ as he got back into the car and fled the scene of the murder. He was convicted of murder last month 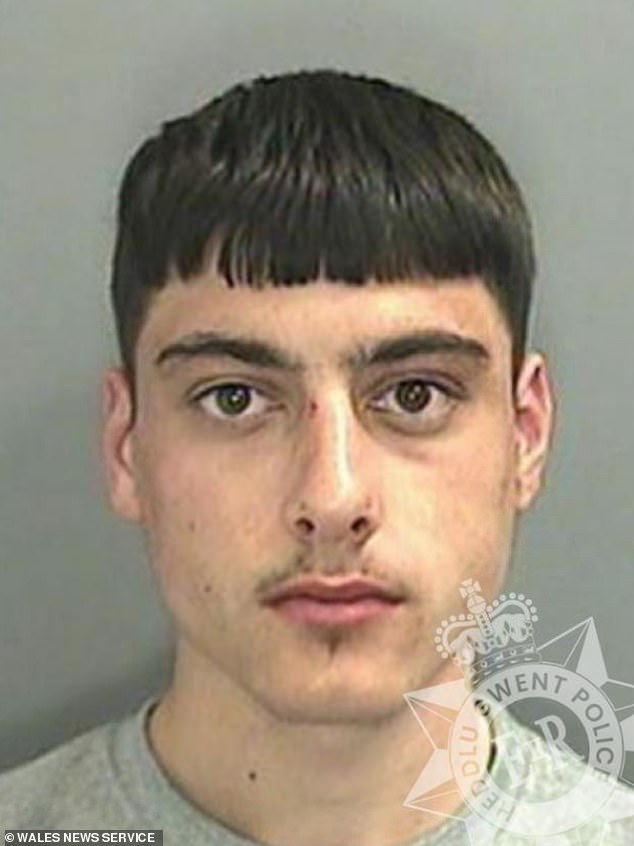 Jeremy shouted: ‘We’ve got his Gucci bag’, before the gang fled in a stolen car.

He and accomplice Lewis Aquilina, 20, were convicted of murder with friend Kyle Raisis, 18, convicted of manslaughter for his part in the robbery.

Strickland was convicted of robbery and sentenced at Cardiff Crown Court for eight years.

Mr Justice Saini told him: ‘You provided assistance and encouragement to the murderers.’

Victim Mr O’Connor – known by friends as ‘Apple’ – suffered a wound to the heart and died within minutes.

Jeremy, now 18, and Aquilina were convicted of his murder on a unanimous verdict by a jury after a two-month trial.

Raisis, Strickland, and Jeremy were snapped in photos holding huge blades including machetes before the stabbing took place.

The trial heard Jeremy was ‘fascinated by knives’ and had been sentenced for stabbing a teenage rival just months before the fatal attack on Ryan.

Jeremy bought a string of horror blades including large ‘Predator’ and ‘Rambo’ knives.

The gang were in a stolen Ford Fiesta when two allegedly jumped from the car and attacked him with large knives.

Prosecutor Michael Brady QC said the five had travelled from Cardiff to Newport ‘when on seeing Mr O’Connor wearing a Gucci manbag, decided to rob him.’

The court heard witnesses reported the car to police and the Fiesta was involved in a high speed pursuit later that day and stopped by a stinger.

At a previous sentencing Jeremy was jailed for life and told he must serve at least 24 years. 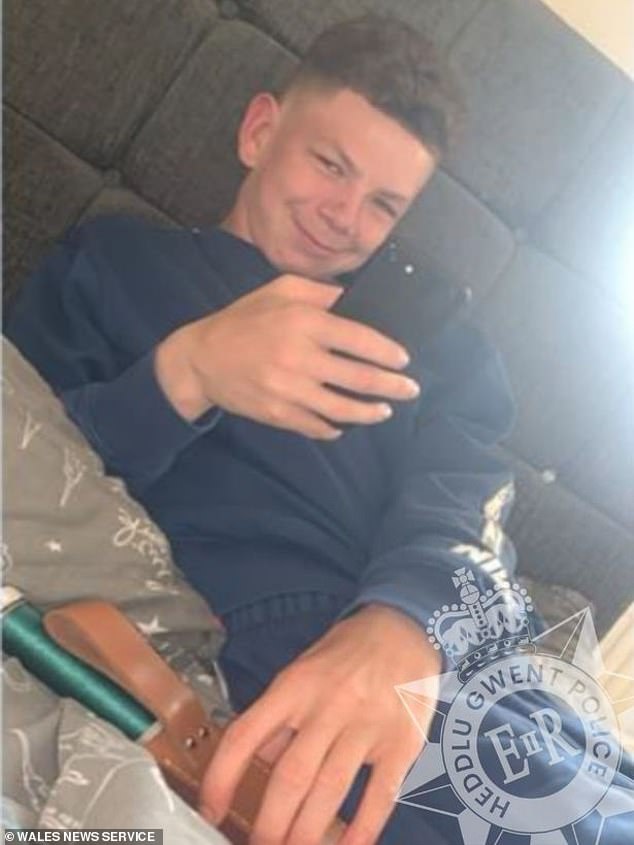 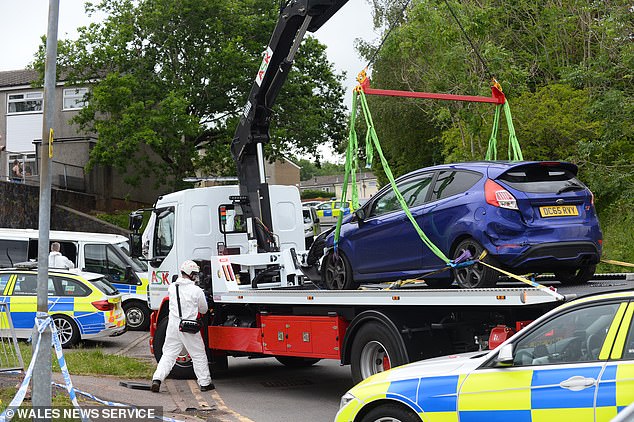 Following the stabbing, the gang escaped in a Ford Fiesta, which was involved in a high speed pursuit later that day and stopped by a stinger. Pictured: The recovered escape vehicle 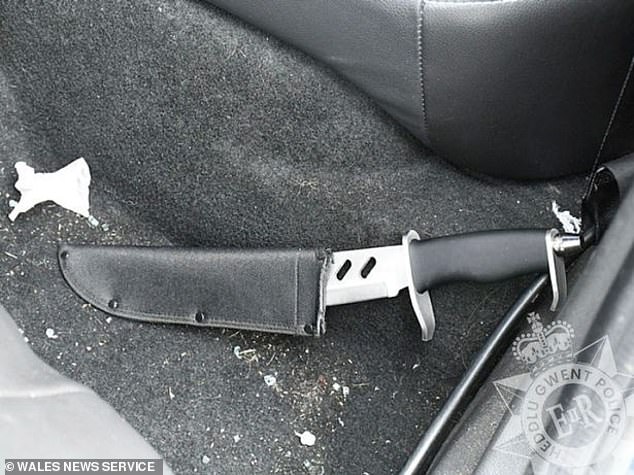 A knife was found by police left inside the Ford Fiesta 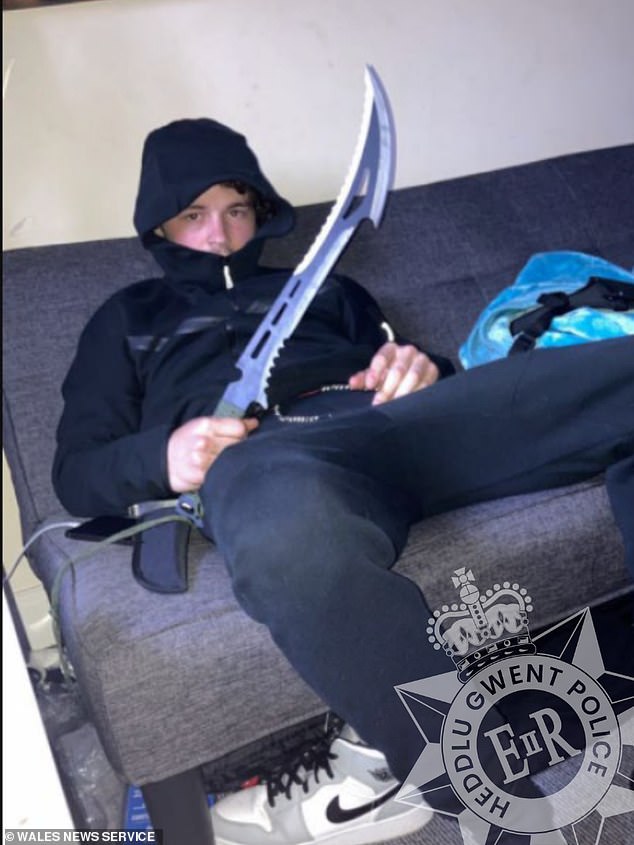 Jeremy (pictured), who was convicted of murder, was ‘fascinated by knives’ and had been sentenced for stabbing a teenage rival just months before the fatal attack on Ryan

Mr Justice Saini told him: ‘You have an obsession with knives.

‘It is possible you may never be released.’

Aquilina was jailed for life with at least 22 years for initiating the robbery.

Raisis was jailed for 12 years.

The five, all of Cardiff, all denied murder, manslaughter and robbery.

Fiteni was cleared of all charges.