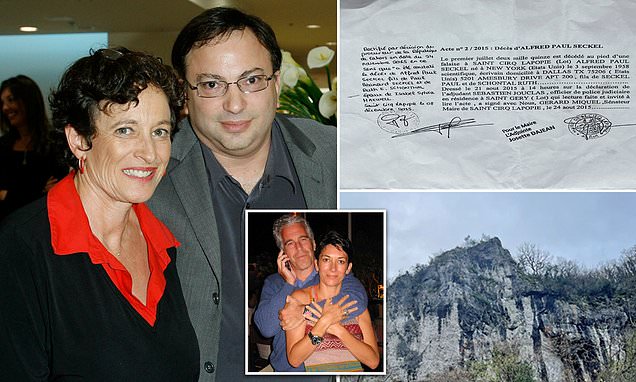 EXCLUSIVE: ‘A hand and a foot were missing, probably eaten by wild boars.’ Mysterious death of Ghislaine Maxwell’s con-man brother-in-law is finally declared a suicide SEVEN YEARS after he jumped to his death from a 100-ft. cliff in France

The body of Ghislaine Maxwell‘s con-man brother-in-law lay rotting for weeks at the foot of a 100-ft. high cliff after his apparent suicide, DailyMail.com can exclusively reveal.

It was originally believed Al Seckel may have faked his own death when he disappeared seven years ago, but now DailyMail.com has obtained his death certificate and can confirm his demise.

Seckel has been described as an international man of mystery. Like Jeffrey Epstein, he claimed academic credentials he did not have and came to a violent end near Saint-Cirq-Lapopie, a tourist village known as one of the prettiest in France, 80 miles north of Toulouse.

‘It was the smell of putrefaction that eventually led to the corpse,’ former deputy mayor Roland Garreau told DailyMail.com. 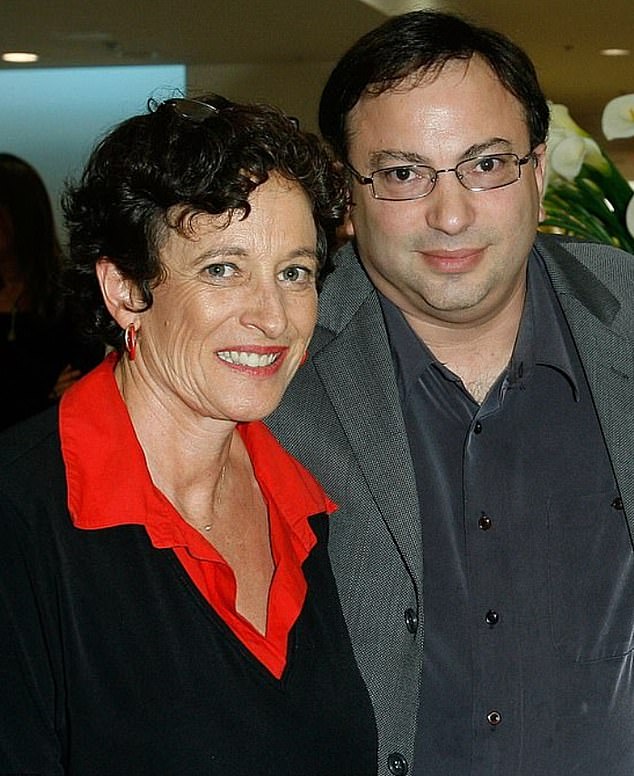 Al Seckel accompanied Isabel Maxwell to a Saks Fifth Avenue event in Beverly Hills in 2008, the year after he said he had married her 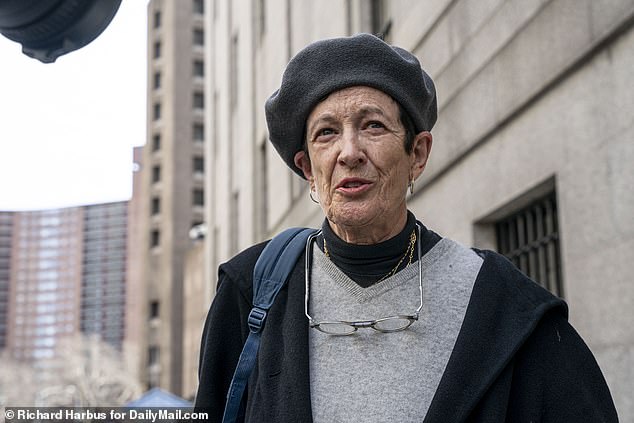 Isabel Maxwell was a fixture at Ghislaine’s sensational weeks-long trial in New York, appearing in one of her trademark berets virtually every day

The body had been lying for weeks in bushes at the bottom of a cliff from which Seckel, 56, had apparently thrown himself.

The circumstances of Seckel’s death have long been a mystery.  In 2019, The Daily Beast reported that it ‘could not locate any officials in the town where Seckel was last known to live who had any report of his death.’

Before he disappeared, he knew The Tablet was planning to publish a mammoth 5,000-word article exposing him for conning people out of thousands of dollars in a racket to buy rare books.

He had initially cooperated with author Mark Oppenheimer but later stopped talking to him. The piece was published on June 20, 11 days before his body was found.

Seckel claimed to be the husband of Ghislaine’s older sister Isabel Maxwell. Isabel was a fixture at Ghislaine’s sensational weeks-long trial in New York, appearing in one of her trademark berets virtually every day as she supported her scandal-ridden sibling.

Ghislaine, 60, was found guilty in December on five sex-trafficking counts, which carry a potential 65-year prison term . She will be sentenced in June and is currently in custody in the  Metropolitan Detention Center in Brooklyn, New York. 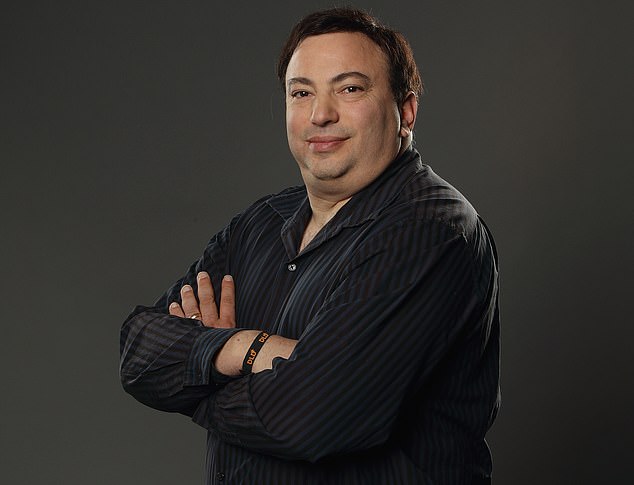 Al Seckel  claimed to be the world’s greatest collector of optical illusions, and gave a 2004 TED Talk on the topic that has been viewed 2.6 million times 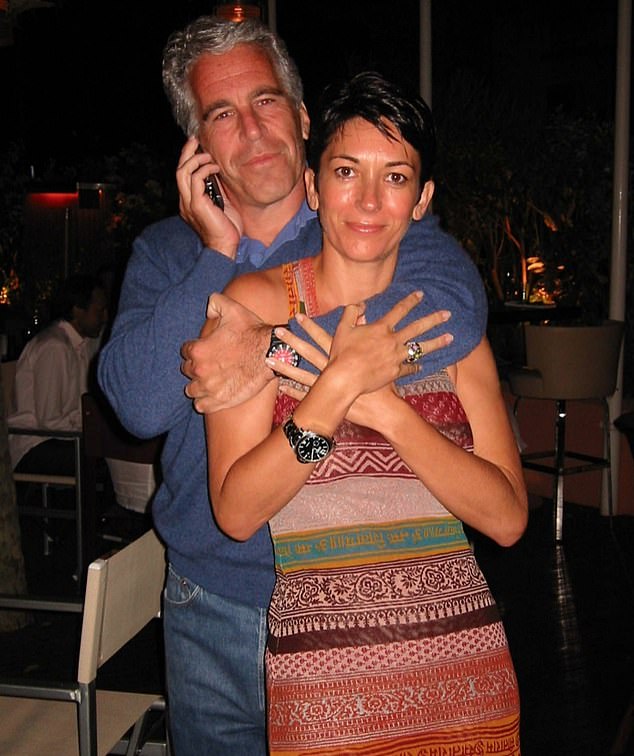 Seckel’s sister-in-law is Ghislaine Maxwell, who is now facing up to 65 years in prison for sex-trafficking offenses. Her ex-lover Jeffrey Epstein hanged himself in prison in 2019 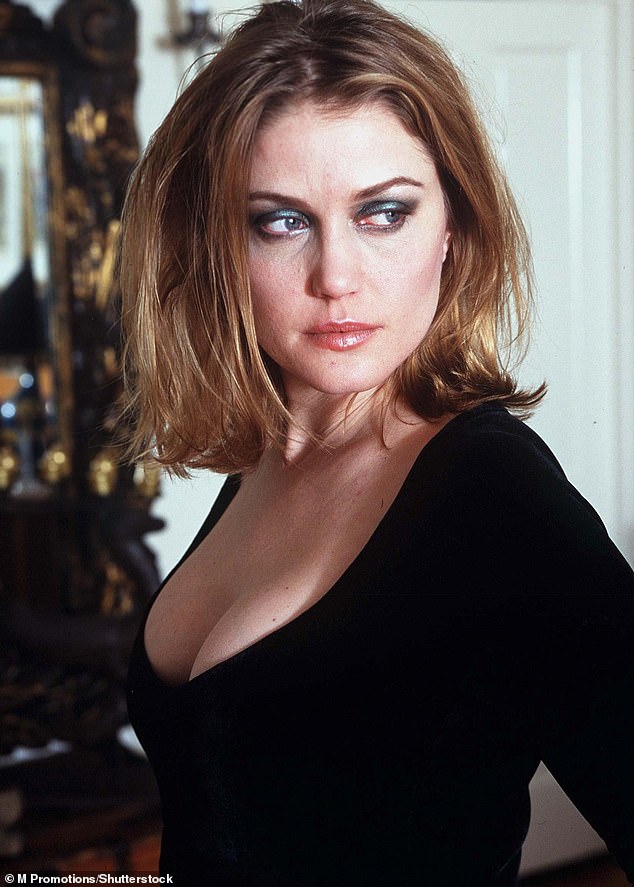 But Seckel had never divorced his third wife Alice Klarke so any marriage to Isabel would have been bigamous. He had previously been married to model and actress Denice Lewis, who had dated Princess Diana’s lover Dodi Fayed.

Seckel told The Tablet he couldn’t remember the date of his marriage to Maxwell, 71. ‘I don’t keep the dates in my head,’ he said as he guessed it was around 2007.

Confirmation of Seckel’s suicide is the latest twist in the trail of weird deaths that has followed the Maxwells. The media tycoon Robert Maxwell, 68, was found dead in the sea in 1991 after disappearing from his yacht off the Canary Islands.

His daughter Ghislaine’s one-time lover Jeffrey Epstein, 66, was found hanged in his New York prison cell in 2019 as he awaited trial for sex-trafficking.

And in February this year, Jean-Luc Brunel, 75, a French modeling agent and close Epstein associate, was found hanged in his Paris prison cell. He was being held on suspicion of the rape and sex-trafficking of minors.

That grisly list has now been joined by the confirmation of the suicide of Isabel Maxwell’s ‘husband.’

New York-born Seckel, whose mother was a refugee from the Nazis, claimed to be the world’s greatest collector of optical illusions, and gave a 2004 TED Talk on the topic that has been viewed 2.6 million times.

He was also an atheist who co-created the Darwin Fish logo. 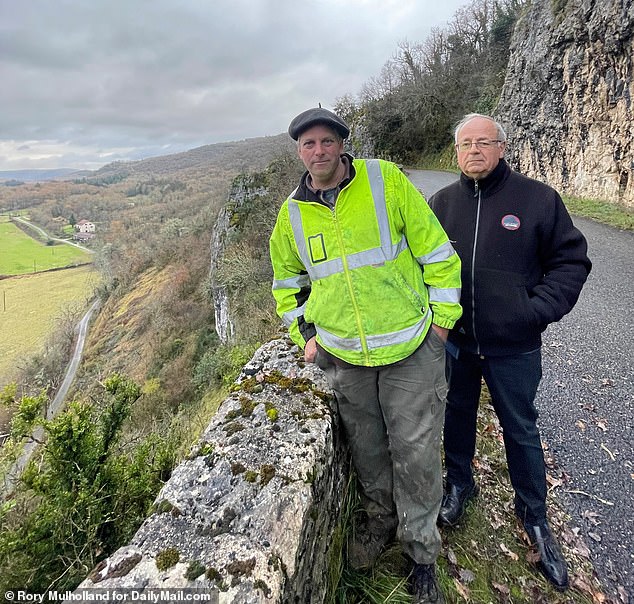 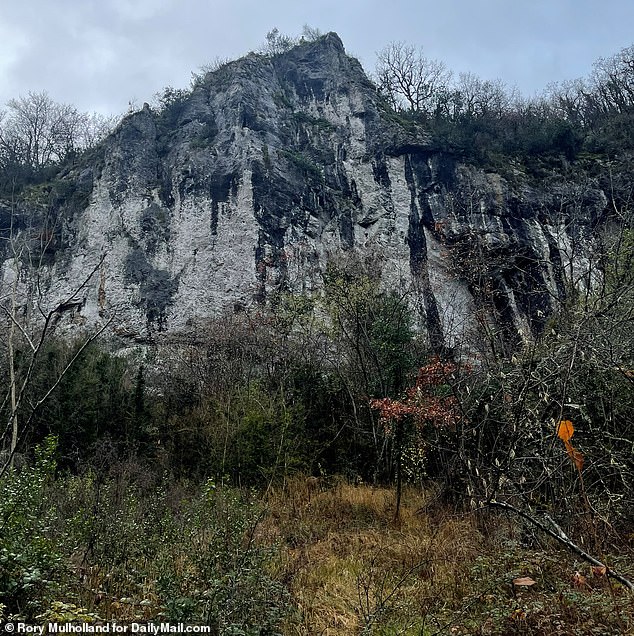 Seckel’s body was eventually discovered at the foot of this 100-ft. cliff outside the tourist village of Saint-Cirq-Lapopie, 80 miles north of Toulouse in southwest France

Seckel’s death certificate, written in French, confirms his body was found ‘au pied d’une falaise’ (at the foot of a cliff) in Saint-Cirq-Lapopie

He used Isabel Maxwell to help build up a circle of influential and powerful friends in California, where he passed himself off as an Ivy League graduate and doctoral candidate at Caltech, the prestigious California Institute of Technology.Skeckel shared Epstein’s passion for science and in 2010 hosted a scientific conference on Little St. James, Epstein’s private Caribbean island.

He used his many high-placed contacts to sell rare books to wealthy customers whom he cheated out of tens of thousands of dollars.

kIt was possibly to flee lawsuits that Sekel and Isabel moved to France in 2010. It is believed they lived in a chateau near La-Roque-Gageac, 50 miles northwest of where his body was found.

Saint-Cirq-Lapopie mayor Gérard Miquel told MailOnline that Isabel Maxwell turned up at his offices in 2015 to get a copy of Seckel’s death certificate. The document lists her as Seckel’s wife.

‘On 1 July 2015 Alfred Paul Seckel, born in New York on 3 September 1958… died at the foot of a cliff in Saint-Cirq-Lapopie,’ the certificate reads.

A handwritten additional note on the document specifies that July 1, 2015 was the date the death was recorded and not the actual date of death, as vhad died weeks earlier.

The death certificate ends speculation that Seckel faked his own death in order to go under the radar to hide from people or police who might be looking for him. 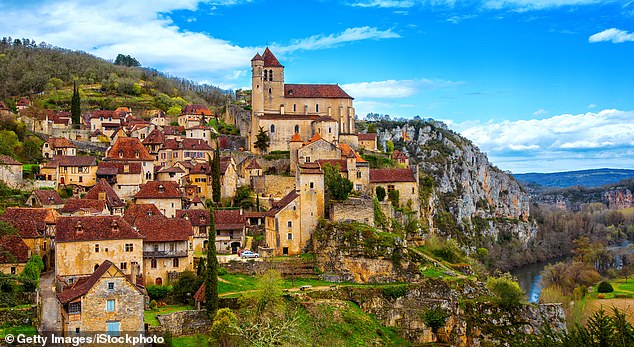 Saint-Cirq-Lapopie’s medieval Old Town. The village is one of the 156-member Les Plus Beaux Villages de France (The Most Beautiful Villages of France) and receives up to half a million visitors a year 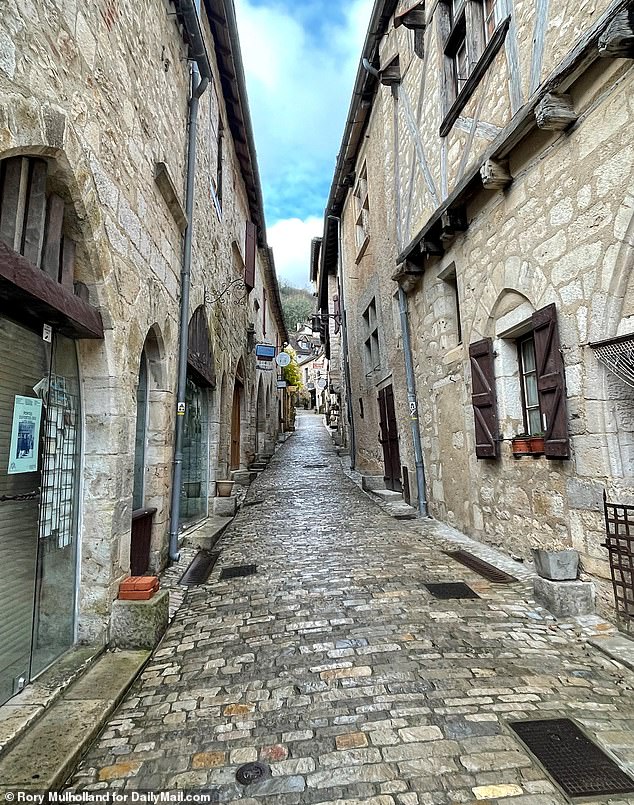 A car that Seckel had rented in the nearby town of Brive-la-Gaillarde was found in a parking lot in Saint-Cirq-Lapopie.

‘I found the car in the car park facing out towards the village, with a view over the village and the valley beyond,’ said Pierre-Yves Bessac, the village’s municipal technical manager.

‘The doors were unlocked and the keys were in the ignition,’ he said. ‘That was of course very unusual.’

A missing person report had been filed for Seckel and police had been informed that the car he had rented had not been returned.

‘I was amazed when about 20 gendarme vehicles turned up after we reported the vehicle,’ said deputy mayor Garreau

Police scoured the village and surrounding countryside to try to locate Seckel in the following weeks, sometimes using sniffer dogs.

A team of police climbers scaled many of the local cliffs – the village is perched on one – but found no body. Garreau was with the gendarmes when they finally found the corpse at the foot of the 100-ft.-high cliff. It was about two miles from the lot where Seckel had left his rental vehicle.

Seckel, an atheist, was the co-creator of the Darwin Fish logo, a parody of the Jesus Fish sign used by Christians to declare their faith

He had walked along narrow country roads and paths to a spot above a couple of houses on the bank of the Lot river below. There he climbed over a low stone wall that lined the road and went to the edge of the precipice before plunging to his death.

‘A hand and a foot were missing, probably eaten by wild boars or foxes,’ Garreau told DailyMail.com at the spot where the body was found.

He said the body was so badly decayed that it had no recognizable face.

‘It was only the clothes holding it together when they put it on a stretcher,’ he said, adding that police were able to identify it using DNA.

Why he should have come to commit suicide – which the death was treated as – to Saint-Cirq-Lapopie remains a mystery, as do the reasons that pushed him to take his own life.

‘I have heard – but cannot confirm – that he was splitting up from his wife,’ said Mayor Miquel.

Isabel Maxwell was not the only one who contacted the mayor’s office regarding Seckel.

Interpol got in touch three separate times to seek confirmation of his death.

‘They had been looking into a scam involving rare books in Italy that Seckel was linked to,’ said Garreau.

Isabel Maxwell filed for bankruptcy in Britain less than six months after Seckel’s body was found.