Girl, 15, loses leg after being attacked by a shark while scalloping in 5ft-deep water in Florida: Family member jumped into the water and beat the predator off her

A teenage girl lost her leg after being attacked by a shark while she was scalloping in five-foot deep water and was saved by a family member who jumped in and beat the animal off her.

The 15-year-old, whose has not been identified, was attacked near Grassy Island, off Keaton Beach in Taylor County.

Her injuries were so severe she had to be airlifted to a hospital in Tallahassee, about 80 miles northwest of Keaton Beach, the sheriff’s office said.

She had surgery and is expected to survive, Taylor County Sheriff Wayne Padgett told CBS News. 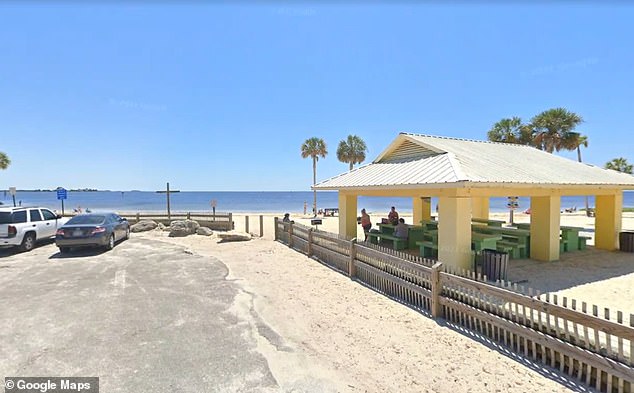 A 15-year-old girl, whose has not been identified, was attacked by a shark near Grassy Island, off Keaton Beach in Taylor County 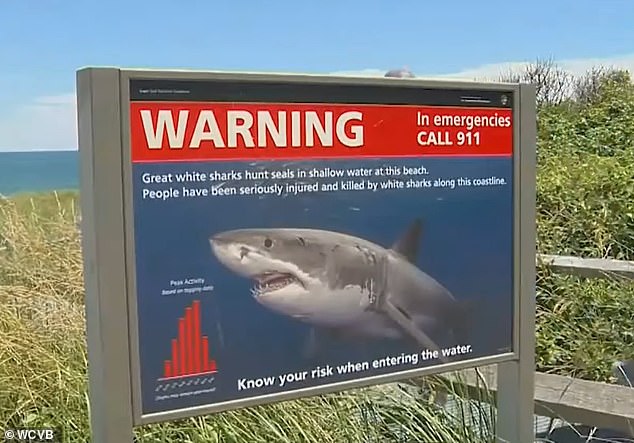 Signage is placed along many of the Florida beaches warning swimmers, surfers, to ‘know your risk when entering the water.’ Florida has topped the global charts for for shark bites and accounts for nearly 40% of unprovoked shark bites worldwide, according to The International Shark File (ISAF)

The young woman was scalloping in waters that officials said were approximately 5 feet deep when she was bit by the shark. It was unclear what type of shark it was.

The sheriff’s office said ‘swimmers and scallopers are cautioned to be alert, vigilant, and practice shark safety.’

Critical rules beachgoers need to follow include is to never swim alone. Not to enter the waters near fishermen, notably sandbars, where sharks often like to congregate.

Swimmers are also advised not to swim near large schools of fish, and to avoid erratic movements while in the water.

Florida has topped the global charts for for shark bites and accounts for nearly 40 percent of unprovoked shark bites worldwide, according to The International Shark File (ISAF).

The ISAF that is based out of the Florida Museum of Natural History and the University of Florida, is ‘the only global scientifically verified database of shark attacks,’  according to its website.  Since its inception in 1958, there are now more than 6,800 individual investigations covering the period from the early 1500s to the present, the ISAF reported. 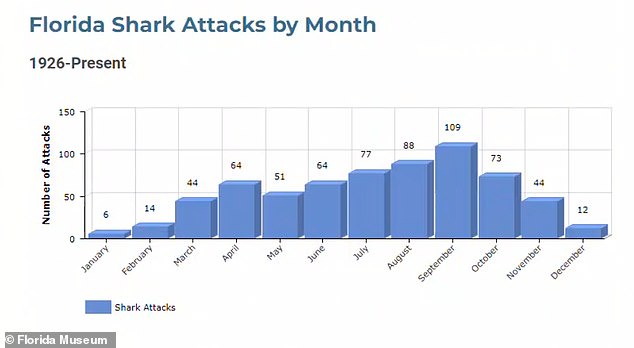 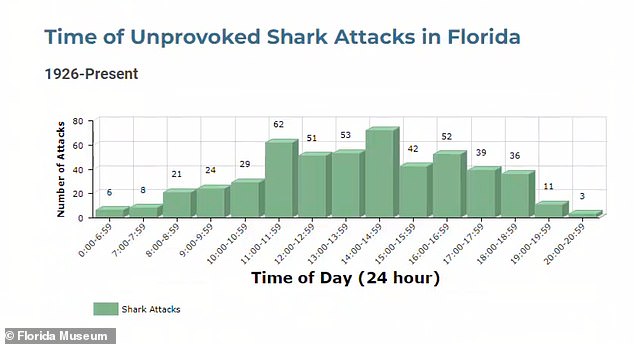 The chart pictured here shows the most popular time of day, in a 24-hour cycle, a person is likely to be attacked by these frightening predators. According to the chart, 11 am to 12 noon and 2 pm to 3 pm, are peak times when these predators like to feast 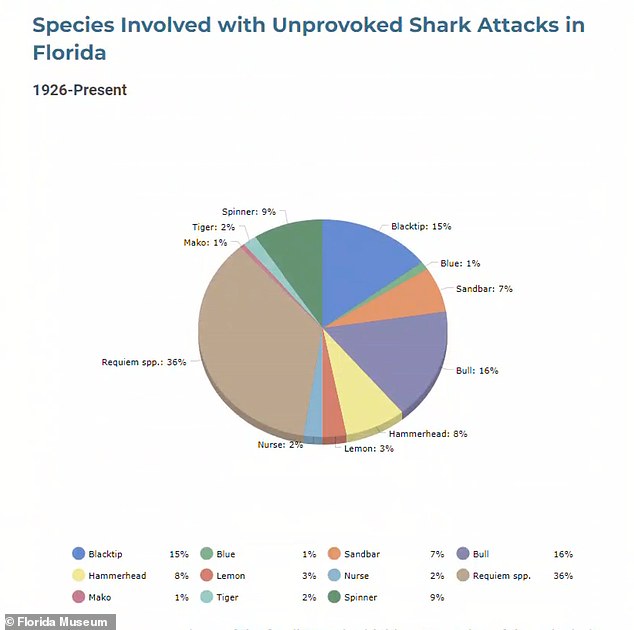 The chart pictured here describes the type of shark that are involved in many of these unprovoked shark attacks. According to the chart, ‘Requiem sharks’ that come from the family of carcharhinidae, account for 36% of the shark attacks. These sharks  are commonly found worldwide in warm, shallow waters along coasts and in rivers 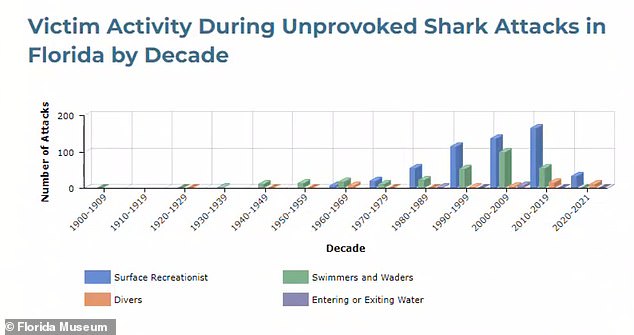 The chart pictured here shows victims of unprovoked shark attacks were at it highest between 2010 and 2019. Those victims that were engaged in water activities, categorized as ‘surface recreationists,’ that include surfing, water skiing, windsurfing, boogie boarding, rafting, or floating on inflatables, at the time of attack

Volusia County in Florida is considered the Shark Bite Capital of the World, had the most shark bites (17), accounting for 63% of all Florida attacks, according the ISAF.

Florida’s 28 cases represent 60% of the U.S. total and 38% of unprovoked bites worldwide. This is consistent with Florida’s most recent five-year annual average of 25 incidents.