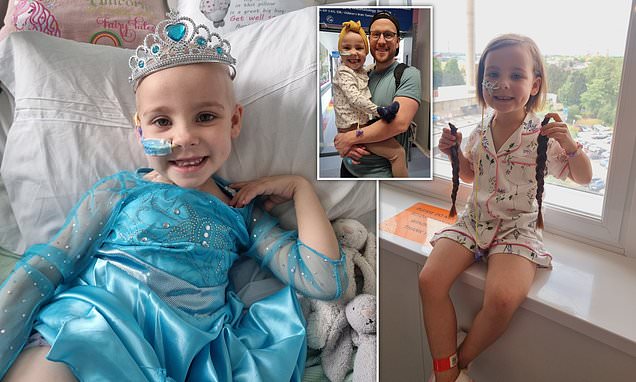 Can YOU help Florence? Leukaemia-stricken girl, 5, needs £500,000 to pay for life-saving treatment abroad because NHS won’t fund it

The parents of a five-year-old girl battling a rare cancer are appealing to the public to help raise £500,000 for potentially life-saving treatment abroad.

Like many girls her age, Florence Bark loves princesses and enjoys dressing up as her favourite Disney characters. She also told MailOnline she is also a big fan of ‘doggies’ and other animals.

But her world was shattered last month after being diagnosed with a rare form of the blood cancer leukaemia, called acute myeloid leukaemia.

Florence, from Corby in Northamptonshire, is waiting for a bone marrow transplant that is funded by the NHS.

But she has a rare gene mutation, found in only 10 per cent of cases, which means the treatment is predicted to fail.

If the transplant doesn’t work, Florence’s only chance will be for a pioneering procedure called CAR-T therapy that teaches her own immune system to fight off the disease.

But the NHS won’t pay for the procedure as it not approved in the UK for her type of cancer, forcing her family to turn to crowdfunding in preparation of getting her the treatment privately in either Singapore or the US.

This is the same treatment that cured Oscar Saxelby-Lee, the British boy who won the nation’s heart after his leukaemia battle went viral in 2018. 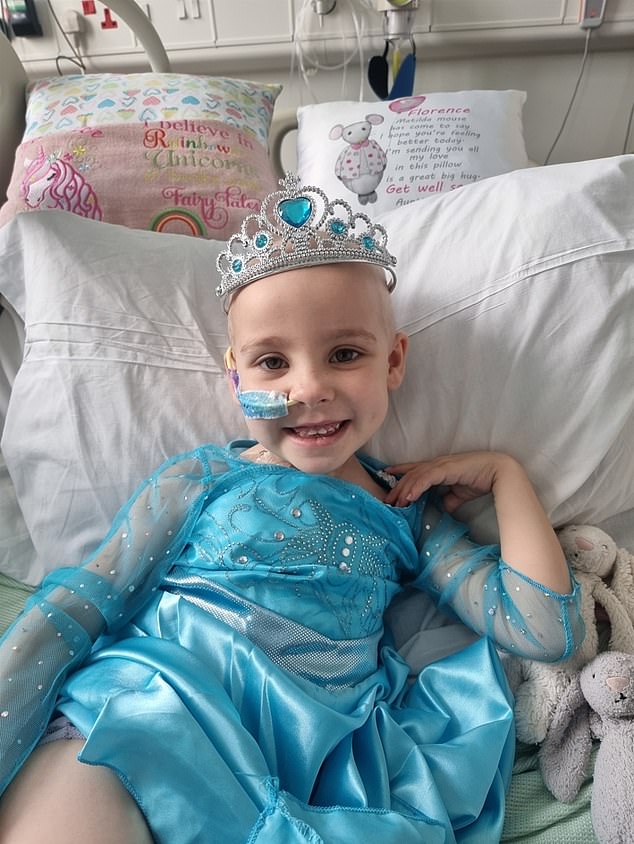 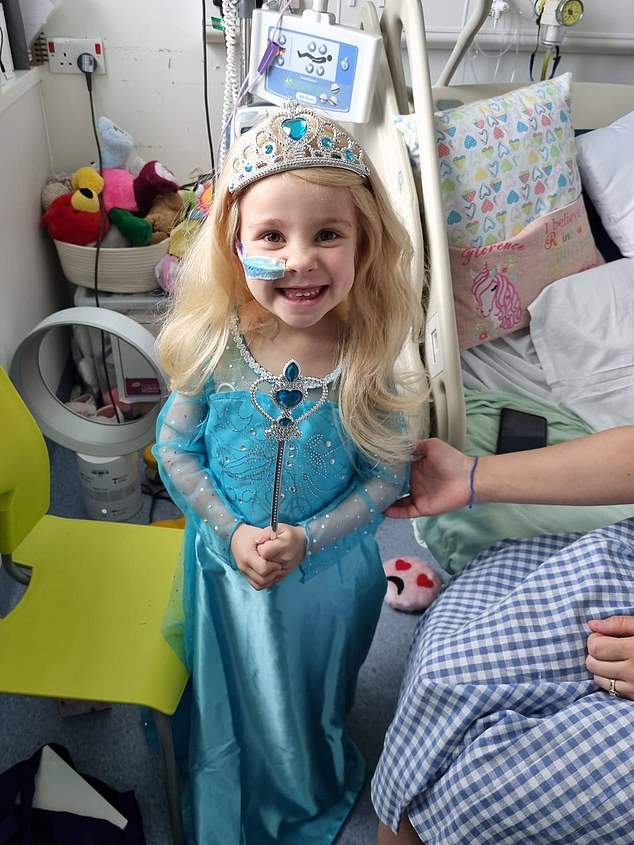 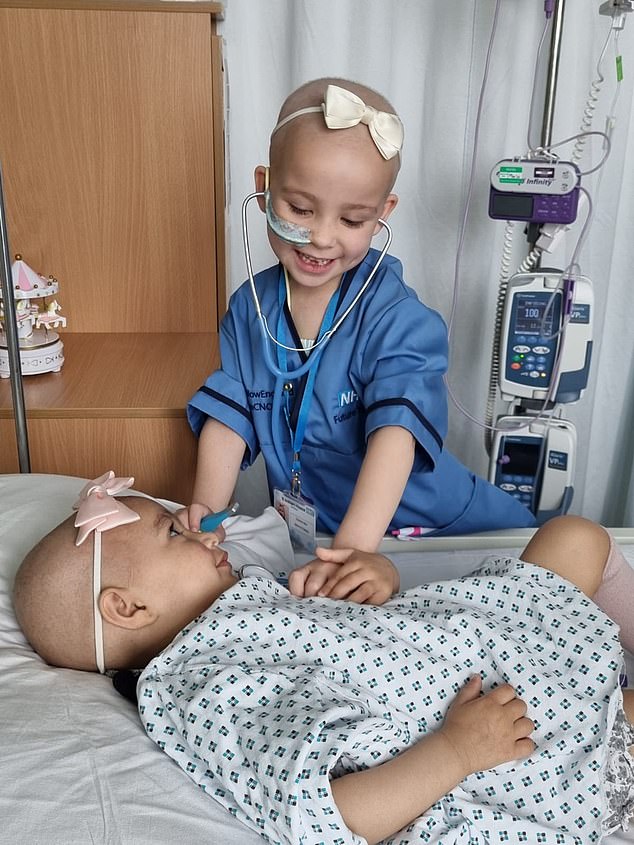 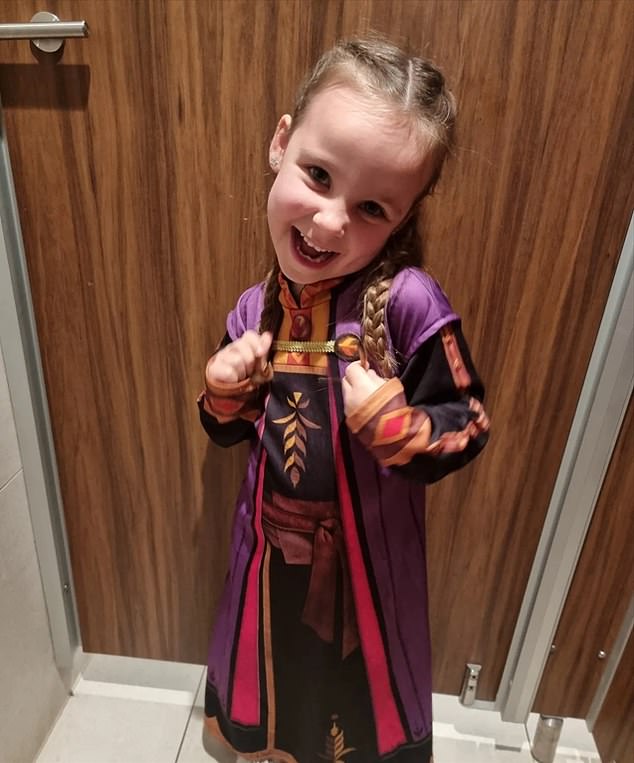 Florence, pictured here on special trip to see Frozen a few weeks before her diagnosis. Her mother Stacey said medics originally suspected Florence had a range of childhood infections before the shock blood cancer diagnosis

Strangers raised half a million pounds for Oscar’s treatment, and the Barks hope they can also count on the public’s generosity.

They said they will do everything in their power to help save their ‘beautiful princess’.

The therapy is available on the NHS for children and some adults with more common types of blood cancer.

What is acute myeloid leukaemia

Leukaemia is cancer of the white blood cells with aggressive forms of the cancer referred to as acute.

Acute myeloid leukaemia affects a type of white blood cell called a myeloid which fights off infections and prevents the spread of tissue damage.

Symptoms of  acute myeloid leukaemia include:

The cause of acute myeloid leukaemia is unknown but it is most commonly diagnosed in people over 75.

It is treated with chemotherapy and in some cases medics may also recommend a stem cell transplant.

About 3,100 people diagnosed with it each year in the UK.

Florence is one of just around 100 children diagnosed with acute myeloid leukaemia every year.

This cancer affects cells in the bone marrow, causing them to make too many white blood cells too quickly and releasing them underdeveloped into the bloodstream.

These underdeveloped white blood cells can then cause problems in the rest of the body.

This cancer is treated is with bone marrow transplant from a donor whose genetic markers are as close as possible to the patient’s after a course of chemotherapy.

Unfortunately, Florence has a rare gene rearrangement that affects less than 10 per cent of children with this type of cancer.

Medics have warned the family this makes her prognosis very poor even if a matching donor is found.

Her mother Stacey said Florence first started feeling unwell around the start of May, which she said was unusual as she tends to tough illnesses out.

‘Florence never ever complains about being poorly, she’s really got a high pain threshold,’ she said.

‘She started having a little bit of a cough which turned quite bad so we ended up taking her to urgent care.’

The 32-year-old mother was originally told it was likely to be croup but her daughter’s condition worsened.

Mrs Bark and Florence were sent back and forth by medics who suspected the five-year-old had everything from tonsillitis to an ear infection.

Then 15 days after originally seeking medical help, Mrs Bark, who works as a healthcare assistant, decided she had had enough.

‘She was just rolling around in pain in bed and I said, “I’m not having this there’s something not right”,’ she said.

Mrs Bark then took Florence to hospital on May 13 and refused to leave until medics did a blood test. 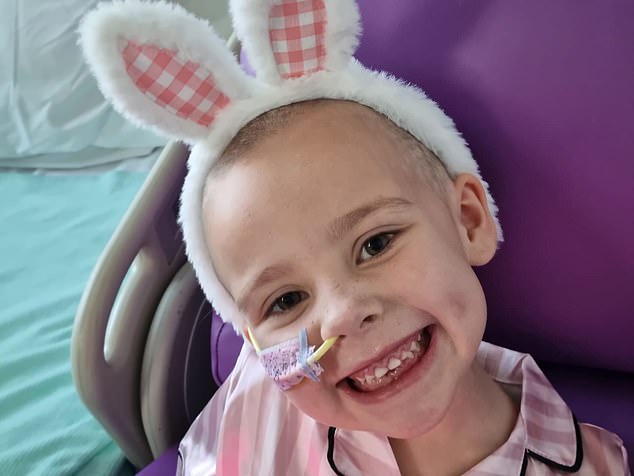 Adding to their woes, genetic testing confirmed Florence has rare gene rearrangement that affects less than 10 per cent of children with the cancer and meaning a stem cell transplant is less likely to be successful 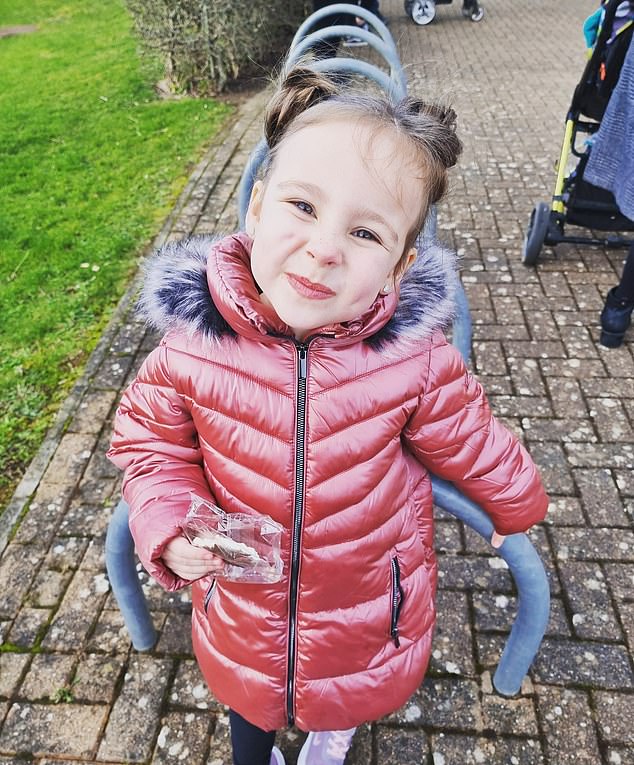 The family have been advised to fundraise now in anticipation the transplant won’t cure her cancer so they can afford to get Florence CAR-T therapy, that the NHS won’t fund, overseas 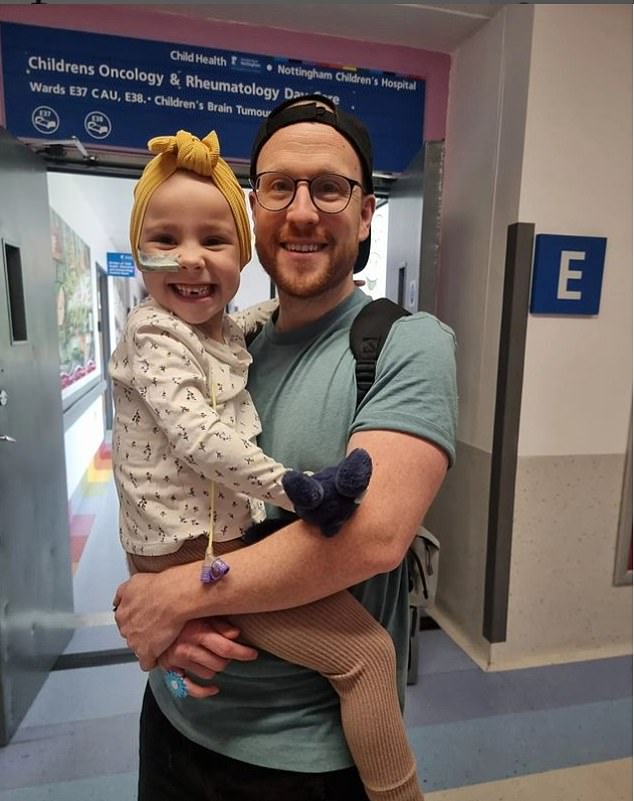 Florence with her dad Andrew. The family say they will do everything in our power to help save their beautiful princess 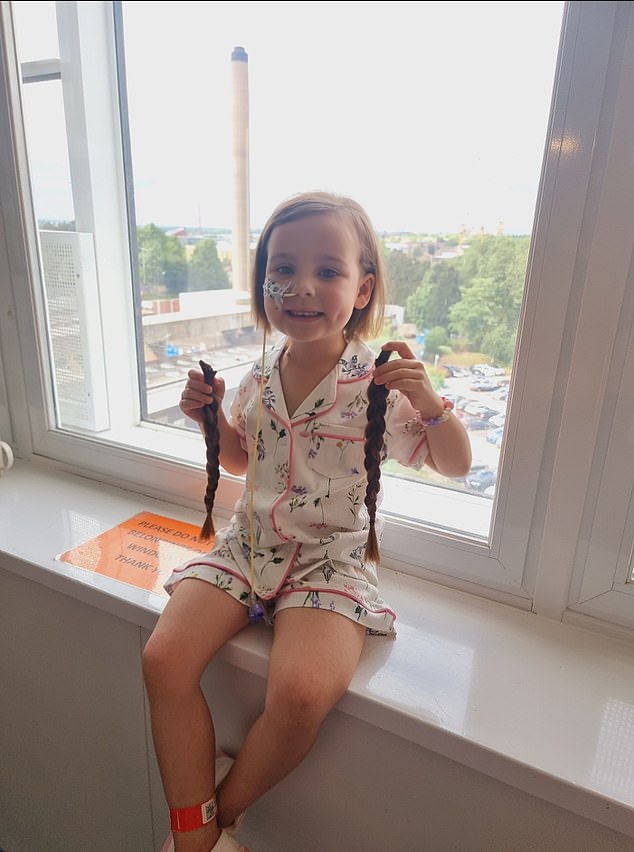 While undergoing cancer treatment, Florence decided to donate her hair to the Little Princess Trust a charity that makes wigs for children and young people who lose their hair due to cancer 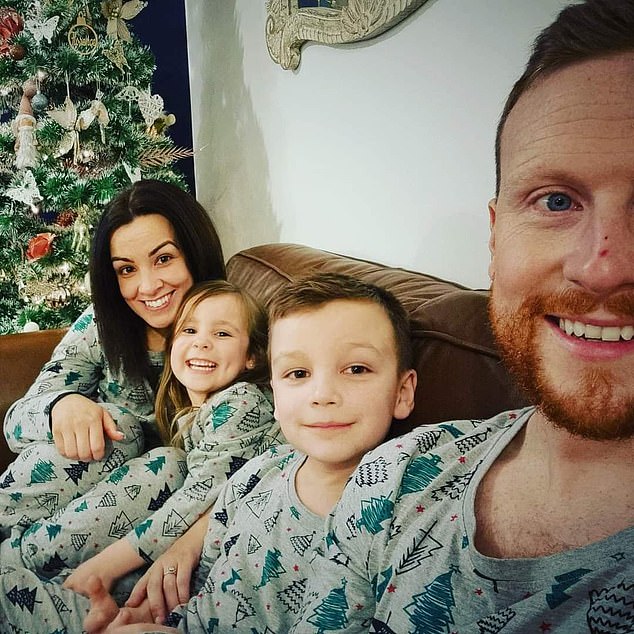 The Bark family at Christmas time. Florence in the centre sitting with her mother Stacey, eight year-old brother Freddie, and her dad Andrew

This test revealed that Florence had acute myeloid leukaemia.

Florence is scheduled to have a bone marrow transplant in the next five to six weeks though Mrs Bark said the NHS has only found a partial match amongst currently registered donors.

‘We want a really good match because her risk factors are so high…it’s not going to give her the best chance,’ she said.

‘Us doing this search is really the only hope we have for a successful bone marrow transplant.’

WHAT IS CAR-T CELL THERAPY?

CAR-T cell therapies are available on the NHS for children and people up to 25 with B cell acute lymphoblastic leukaemia.

The treatments involve taking a specific immune cell – known as T cells – from a patient’s blood. T cells help the body fight infection by seeking out viruses and other pathogens, before killing them.

These cells are then engineered in the lab to express a gene that codes for a specific receptor that binds to a protein on the patient’s cancer.

Once these cells are re-infused into a patient’s blood, their immune system is ‘reprogrammed’ to recognise and fight off tumours.

CAR-T – chimeric antigen receptor T-cell – therapy is therefore customised to each patient.  It is suitable for those with advanced or worsening blood cancers that are not responding to treatment or have relapsed.

The FDA in the US approved two CAR-T cell therapies in 2017.

Mrs Bark and her husband Andrew, who works as a primary school head teacher, were also advised to start fundraising for treatment overseas now in anticipation that the transplant won’t work.

‘We were advised that our best option because of Florence’s prognosis is to start fundraising for the possibility that we will need to go,’ she said.

‘Her genetics give her a really high chance that the stem cells are going to fail’.

This prompted the family to set up a crowdfunding page now which has already raised over £121,000 so far.

While the family stated they originally wanted to keep Florence’s situation private, they were committed to doing everything they could to save their daughter.

‘We will do everything in our power to help save our beautiful princess and what we need to do now is ask for the kindness of others,’ they said.

If Florence’s transplant is successful and she is deemed to not be at risk of relapse, the family said the funds will be used for any ongoing care she needs or donated to cancer research or another family in similar circumstances.

They are also encouraging Britons to sign up to be a transplant donor to help not only Florence but all children who have this cancer.

Mrs Bark said: ‘People don’t realise how easy it is, it is just a cheek swab.’

If people are found to be match, they can be called to have an operation to gather bone marrow material for transplant with people needing to spend two days in hospital.

But Mrs Bark said this was a small price to potentially save a child’s life.

‘It’s a little bit of discomfort for a couple of days but you could save a life,’ she said.

People interested in becoming donors can do so by visiting the charity DKMS if they are over 30 or Anthony Nolan if they are under 30.

Generally, only 15 per cent of people diagnosed with acute myeloid leukaemia survive longer than five years, although survival rates are higher in younger patients.

Florence’s case echoes that of Oscar Saxelby-Lee, another British child whose family turned to fundraising to him the £500,000 needed for the CAR-T therapy in Singapore.

The family raised the money they needed in just three weeks and thankfully the treatment was successful with Oscar being declared cancer free in January 2020.

There are about 9,907 new cases of leukaemia of all types diagnosed in the UK each year, with 4,730 annual deaths from disease. 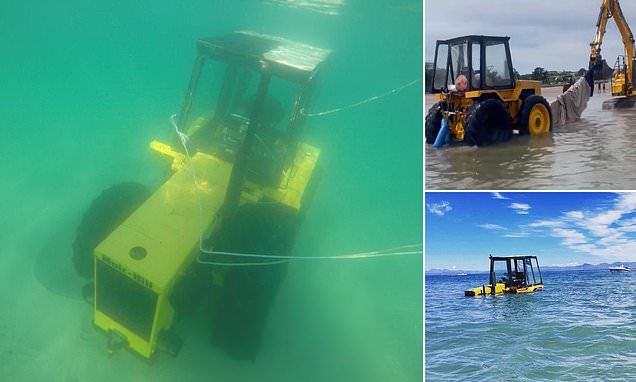 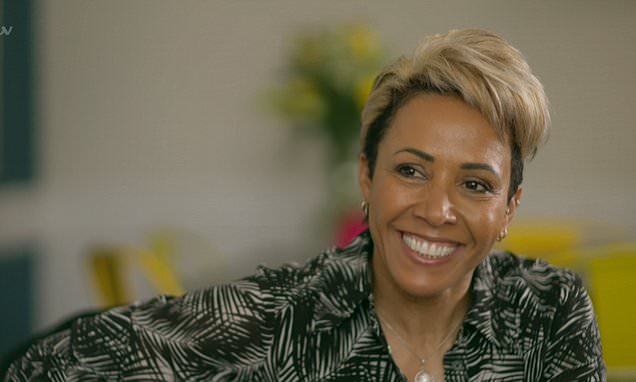 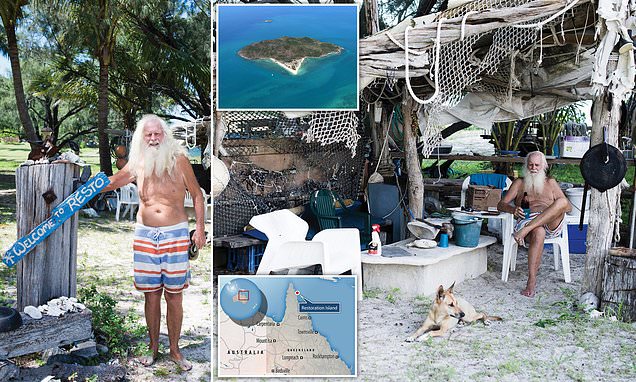 Stockbroker who moved to island after losing riches needs ‘some help’

End of the castaway dream? Australian stockbroker who moved to private island after losing his riches and divorcing his wife in 1997 admits that he may need 'some help' and invites people to join him as he nears 80Da... 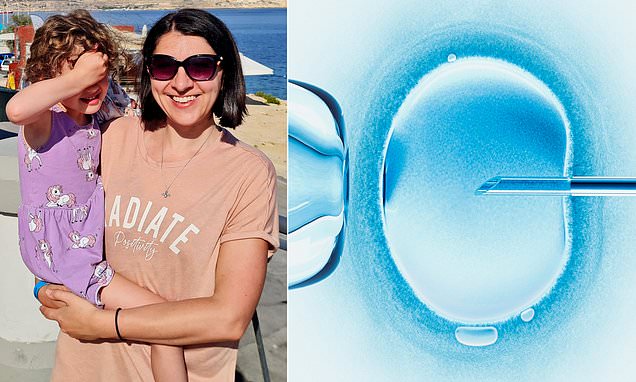 Thousands of NHS staff are given right to three days off for fertility treatment as proposed law to force employers to give women and their partners paid leave for IVF goes before ParliamentThe law would see fertilit...