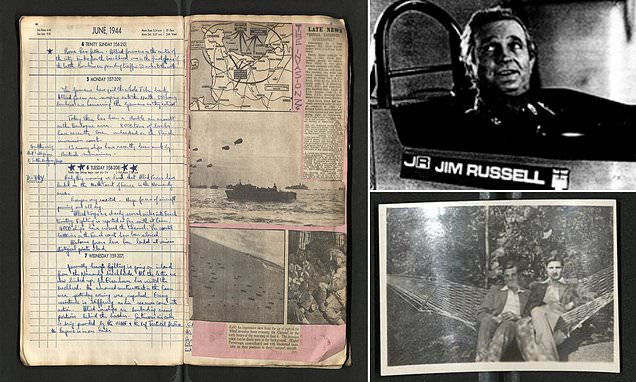 ‘The bomb exploded opposite where Shelia and I were watching the raid…’: Harrowing war diary of a British teenager whose sister was killed while stood next to him during The Blitz

The harrowing war diary of British teenager Mike Rogers whose sister was killed as she stood next to him during the Blitz in 1944 has been revealed in a new book.

Rogers lost his left leg from his mid-thigh at age 17 after a 1,200lb HE bomb exploded opposite where he was watching the raid with his sister Sheila on February 20, 1944.

He started the diary in 1939 as Britain was on the brink of War, detailing the daily, and often mundane, experiences of a 13-year-old British boy and his family.

For the next six years, until the end of World War Two; the schoolboy chronicled in a diary only discovered in 2020 after spending 75 years hidden in an attic about how he and his family try to maintain daily life.

With many items restricted and daily activities curbed, Rogers recounts military activities across Europe, Africa and the Far East; the changing British climate; and the constant cruelties of living in an area of London attacked by various flying-craft.

After the war, he trained and worked as an aircraft engineer and had a second career as a freelance writer before he passed away. 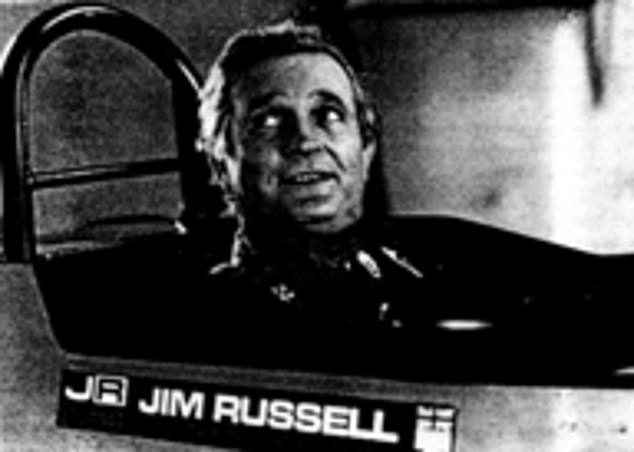 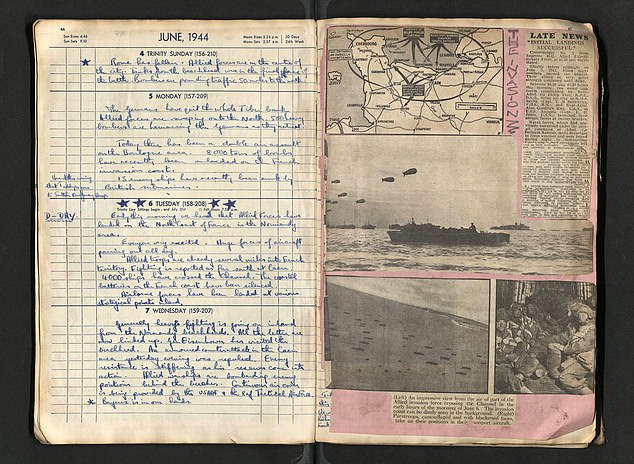 Last night the RAF attacked Berlin once more – and delivered the heaviest air blow yet dealt in the history of warfare. In 30 minutes over 2,500 tons of HE and incendiaries were dropped. More than 1,000 bombers were over Germany during the night.

This was the first all-operational 1,000 bomber assault ever launched, this time no crews being drawn from training stations as they were in 1943 when Cologne, Bremen and Düsseldorf were pounded by a thousand planes.

In Italy the Benedictine Monastery was again shelled and bombed during last 24 hours.

This evening I went to the Odeon to see Betty Hutton, Dorothy Lamour and Fred MacMurray in ‘And the Angels Sing’. Pretty good. Other was OK. A good old western – ‘The Kansan’ with Richard Dix and Jane Wyatt. 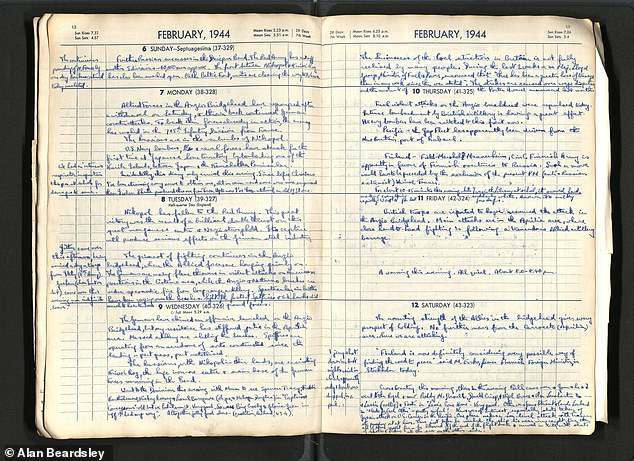 The full strength of the Mediterranean Allied Air Forces has been thrown in against the German positions round the Anzio beachhead.

Complete destruction of the German Eighth Army in the area of Koisum after a 14-day battle, has been announced by Stalin in an order of the day.

‘In the course of the operations’ it says, ‘the Germans abandoned 52,000 killed on the battlefield. Eleven thousand prisoners were taken. All the German equipment and arms have been taken’.

Pacific – news of a large US Naval Task Force having launched a big attack on Wednesday against Truk, Japan’s greatest naval base in the Central Pacific. 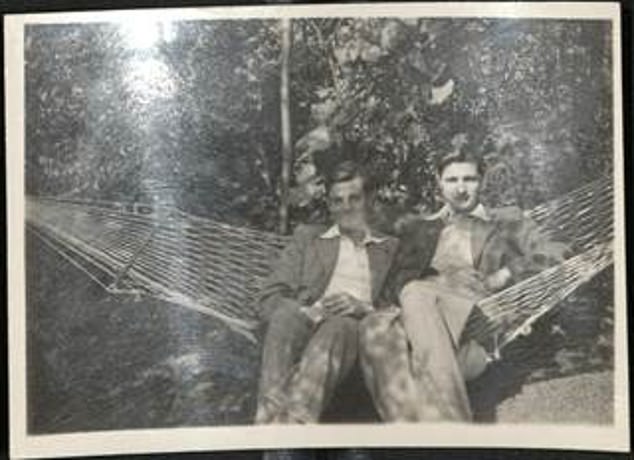 Rogers, pictured in his youth, lost his left leg from his mid-thigh at age 17 after a 1,200lb HE bomb exploded opposite where he was watching the raid with his sister Sheila on February 20, 1944 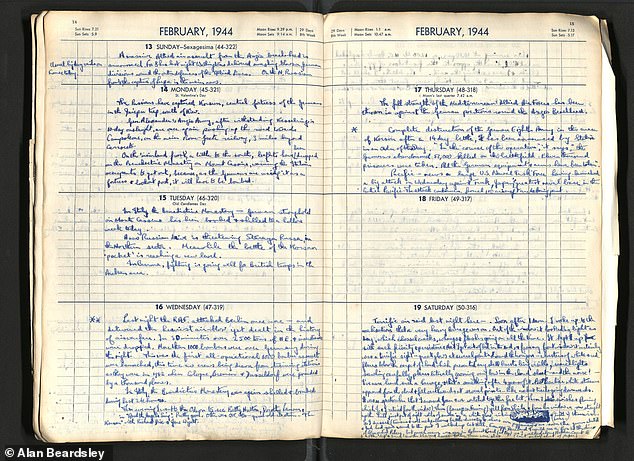 Terrific air raid last night here – soon after 1am. I woke up to the realisation that a very heavy barrage was on. Out of the window it looked as light as day, with colossal cracks, whangs and flashes going on all the time.

It kept up with such ferocity and persistence that I got out of bed in the end, and from my front window it certainly was a terrific sight – great glows at several points round the Horizon – clusters of white and red flares below the carpet cloud which prevented any shell bursts being visible, searchlights searching carefully, planes literally zooming very low in the cloud sheet – and the noise!

I’ve never heard such a barrage, and that’s something after 4 years of it. Peculiar white streams appeared from the cloud and fell earthwards at several points – like rocket trails going downward.

It was so spectacular that I aroused Joan, and we watched together for a bit. Then 2 swishes (during which Joan and I retired from the window).

Then (barrage continuing) yell from Sheila and from her window we saw straight up the hill and just out of sight rolls of smoke in a white glow rising (Smith’s house) thuswise.

So, I dressed (trousers and roll mick – pullover and battledress top and shoes over pyjamas), and as soon as the guns abated, and Dad had gone round to the post I walked up Cat Hill.

From opposite, Dad and I could see a fire in the diner of Alexandra Palace, but much nearer was one in Ashurst Road (at top) so I walked along Hendon Court Avenue, and at the ‘dip and bend’ saw the blazing house fully.

There were also smoking heaps of earth in the front garden on either side of the road. Denoting ‘damped’ incendiary bombs.

One of these burst through again while I (and several 100 (it seemed like) wardens and Canadian soldiers) were standing there, and the householder promptly appeared in pyjamas and walloped bucket full of earth on it.

Then someone with a torch behind me said ‘hey, look at this’ and showed a hole in a front garden on the other side about 2ft across.

I only saw for a glance, but it certainly looked like a UXB. Then I moved round (by the little alleyway) into Ashurst Road and walked up to the burning house whose a couple of NFS tailer pumps were just taking control.

The whole of the top of the house was gutted. The bottom was dark. I walked home soon after and was in bed a bit before 3am again. 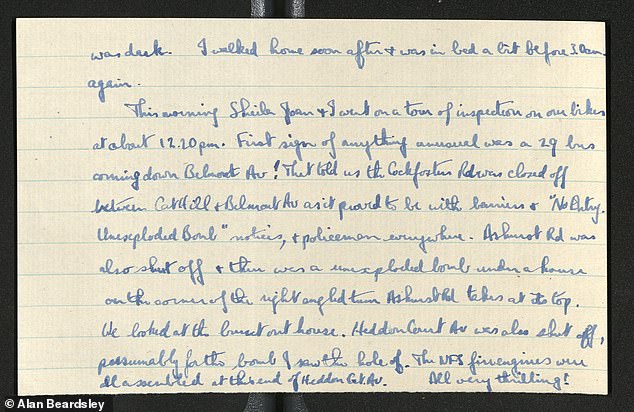 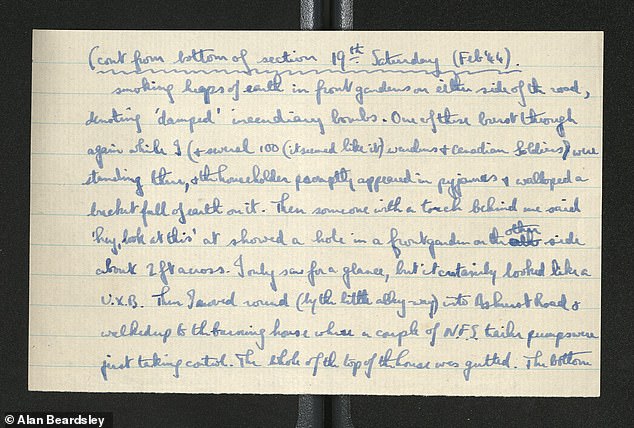 This morning Sheila, Joan and I went on a tour of inspection on our bikes at about 12.20pm.

First sign of anything unusual was a 29 bus coming down Belmont Avenue! That told us the Cockfosters Road was closed off between Cat Hill and Belmont Avenue as it proved to be with barriers and ‘No Entry Unexploded Bomb’ notices, and policemen everywhere.

Ashurst Road was also shut off, and there was an unexploded bomb under a house on the corner of the right-angled turn, Ashurst Road takes at its top.

We looked at the burnt-out house. Heddon Court Avenue was also shut off, presumably for the bomb I saw the hole of.

The NFS fire engines were all assembled at the end of Heddon Court Avenue. All very thrilling!

This evening at 10.10pm, a 1,200 lb HE bomb exploded on Cat Hill directly opposite the front door of 99 where Sheila and I were watching the raid. The details I shall not record here, as I shall certainly never forget them.

I was admitted to the Wellhouse Hospital at Barnet at about 10.45pm. 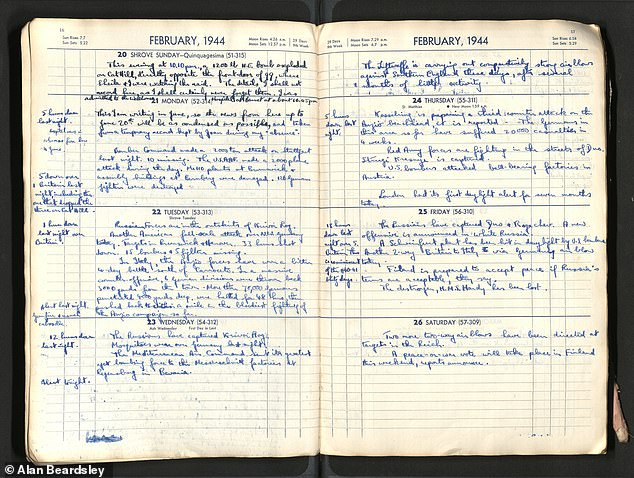 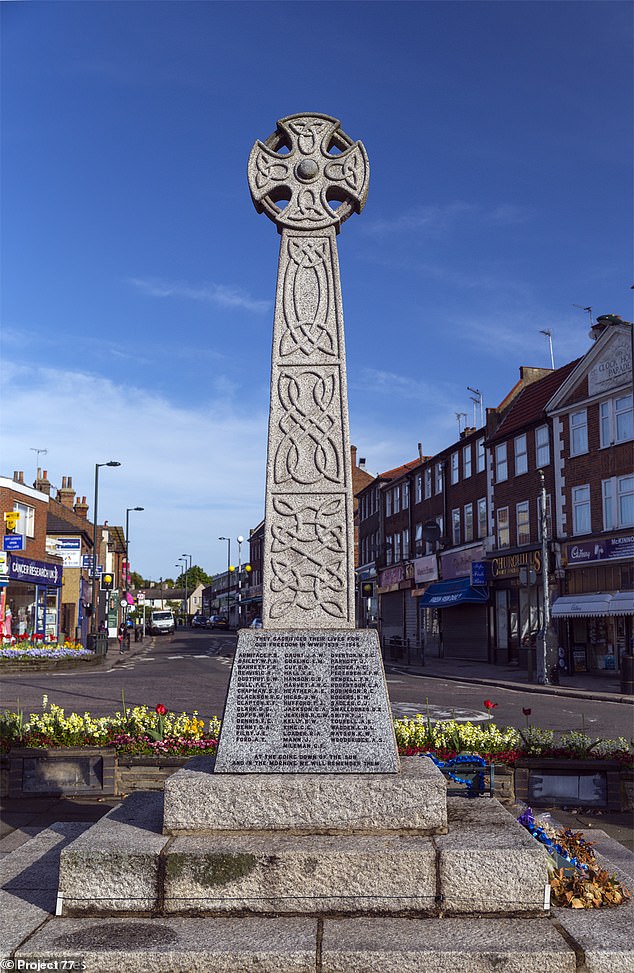 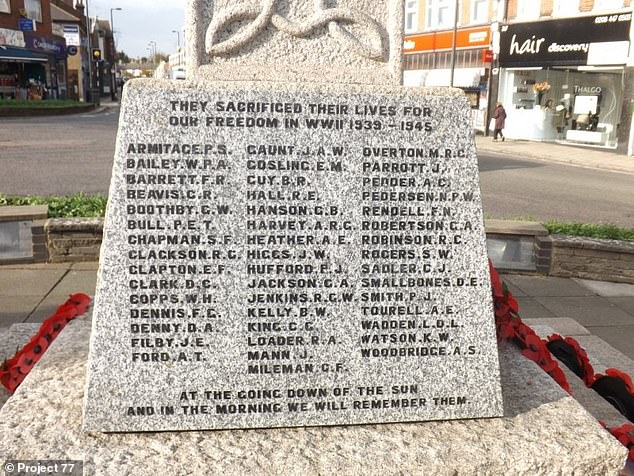 A World War Two memorial in East Barnet to those who sacrificed their lives during the conflict, including Sheila Warrington Rogers 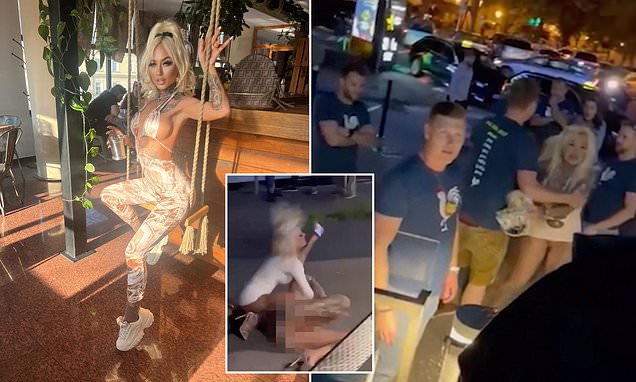 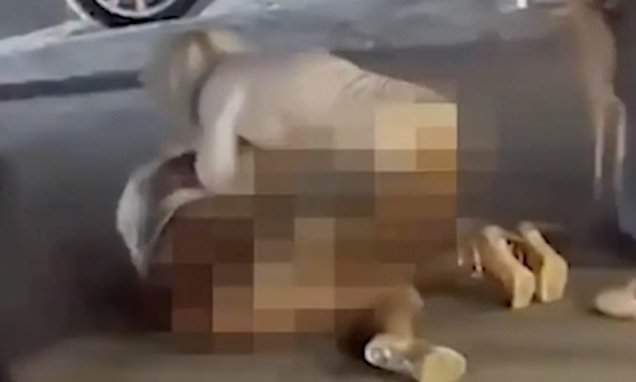