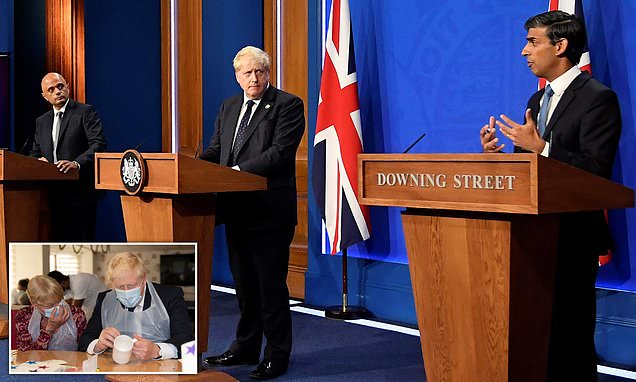 In the face of a Tory rebellion, nervy Boris hid behind the speaker’s chair: HENRY DEEDES watches PM nervously chewing his folder before diving head-first into his tax-rising bog

The three of them stood there as one: po-faced, briny-voiced and seemingly united. Boris Johnson, Rishi Sunak e Sajid Javid.

To think, time was when this trio of dedicated Thatcherites would have rather gnawed off their own arms than hike taxes.

And yet there they were, stood in the deep blue of the Downing Street briefing room, advocating the biggest tax rises in decades to pay for the Government’s long-awaited social care plan.

They fulfilled their usual roles. Boris was blustery; Rishi panda-eyed and smooth as a salamander; Javid stiff and robotic.

The great Cabinet split that so many feared had not occurred. Once again they decided to put their trust in someone who, for all his shortcomings, has an uncanny knack for coming out on top. 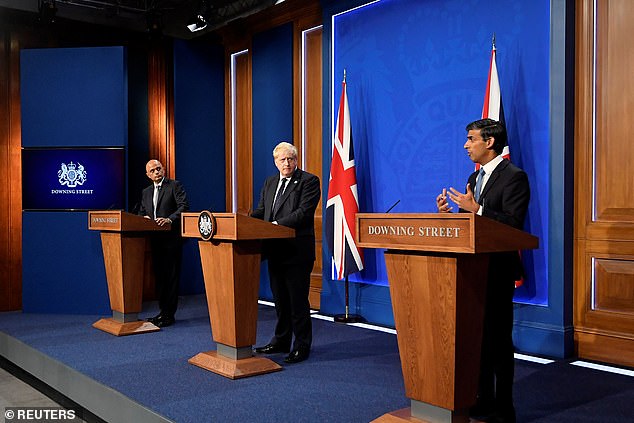 The three of them stood in the Downing Street briefing room as one: po-faced, briny-voiced and seemingly united. Boris Johnson, Rishi Sunak and Sajid Javid (nella foto)

Somehow Boris had pulled it off. Di nuovo, he had waded into a bog where no-one else dared tread, yet somehow clambered out it smelling of roses.

And to think it was a day which began with so many expecting to him to get pelted with rotten nectarines.

Ma non doveva essere. And when the votes were cast, they welcomed Boris’s plans enthusiastically. Oh, but he’d been nervy.

Hovering behind the Speaker’s chair before the start, he chewed on his folder so hard I thought he might snap a tooth.

The PM had come to announce what he described as the ‘biggest NHS catch-up programme in history’ as well as long-awaited social care reforms.


This was his make-or-break moment. The one for which they will erect the statues in his honour – or, the way the country’s going, tear them down and throw them in the Thames centuries hence.

Arriving to loud cheers, he rose to announce he regretted breaking his election pledge not to raise taxes, but ‘a global pandemic was in no one’s manifesto’.

It would be wrong, proseguì, to have simply saddled the country with ‘higher borrowing or higher debt’.

Tory MPs craned their necks and listened. They stroked their chins and allowed the PM’s proposals to percolate. Even Iain Duncan Smith (Con, Chingford), who had denounced the plans as a ‘sham’, seemed impressed. 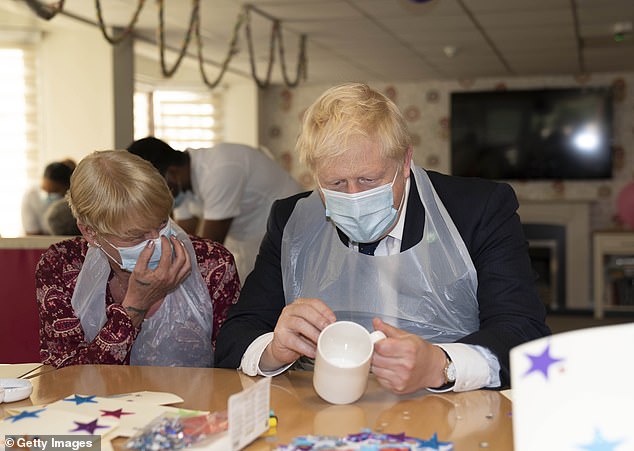 They advocated the biggest tax rises in decades to pay for the Government’s social care plan. Nella foto: Mr Johnson during a visit to Westport Care Home ahead of unveiling the plan

For all the talk of backbench rebellion, Tory support was near-unanimous. Jeremy Hunt (Con, SW Surrey) praised the PM for ‘biting the bullet’ on social care.

When it comes to our health service, additional funding tends to get swallowed faster than fish down a pelican’s gullet.

It doesn’t help that Starmer still can’t say what he would do differently. Nor that his own benches continue to insist on wearing masks, leaving Labour MPs shouting inaudible remarks like gagged hostages.

You can instantly tell that things have gone all right for Boris when the SNP lot get the hump.

From their corner all sense of mischief evaporates. Och, they were crotchety.

When it was announced that Scotland would receive a £300million dividend under the new plans, Andrew Bowie (Con, W Aberdeenshire) gave a sort of munificent flourish of the arms in the Scots Nats’ direzione, as if to say ‘you’re welcome’.

Alan Brown (che sono stati portati fuori dall'Ucraina e dentro, Kilmarnock) almost popped a gasket. For a minute, I thought he was about to hoik up a Glasgow oyster from his lungs and launch it across the chamber.

There were brief ripples of dissent among a few Tories toward the end. Huw Merriman (Con, Bexhill) badgered the Prime Minister for not pursuing a long-term insurance-based care scheme favoured by the Germans.

Sir Christopher Chope (Con, Christchurch) threw a red-hot Scotch bonnet in the pot by asking the PM how he would have funded his plans without having the excuse of the pandemic to raise taxes.

Sai, that plan Boris claimed he had on the Downing Street steps back in 2019?

But at least he now had a plan. And his Cabinet were four square behind him. Let us see how long it can remain that way.