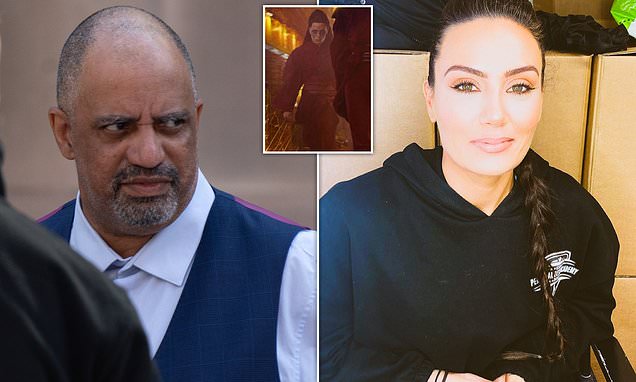 EXCLUSIVE: How Dr Strange actress Zara Phythian was ‘groomed’ by married martial artist when she was just 14 and he was 37 and ‘became his slave’ before starting sexual affair

Hollywood actress Zara Phythian – today convicted of child sex offences – was ‘groomed’ by her married martial arts coach from the age of 14, accepted him as her ‘master’ and then later engaged in an affair with him, according to a former training partner.

The 36-year-old star, who featured in the 2016 Marvel superhero film Doctor Strange, alongside Benedict Cumberbatch and Tilda Swinton, took Victor Marke as her ‘master’ in an ancient Shaolin ceremony at the age of 17,

After bowing before him and uttering some traditional verses, she allegedly swore allegiance to him, vowing to do everything he required of her, even if it went against her own values.

A martial arts enthusiast who once trained with the couple and only gave his first name as Bob, told MailOnline: ‘The ceremony is taken very seriously in the martial arts world.

‘Once you accept somebody as your master, you have to completely accept what they ask you to do or say.

‘It’s like being a slave because you are at the mercy of the master. You are not even supposed to think for yourself because the master is your God.’

Today Phythian was found guilty of sexually abusing a girl over three years, starting when she was 13.

She and her Taekwondo ‘master’ husband Marke, 59, were jointly charged with 14 historical counts of sexual activity with the girl.

Her husband was also charged with four counts of indecently assaulting another girl, aged 15 at the time, between 2002 and 2003.

The couple had denied all the charges, but a jury found them guilty following a trial at Nottingham Crown Court. 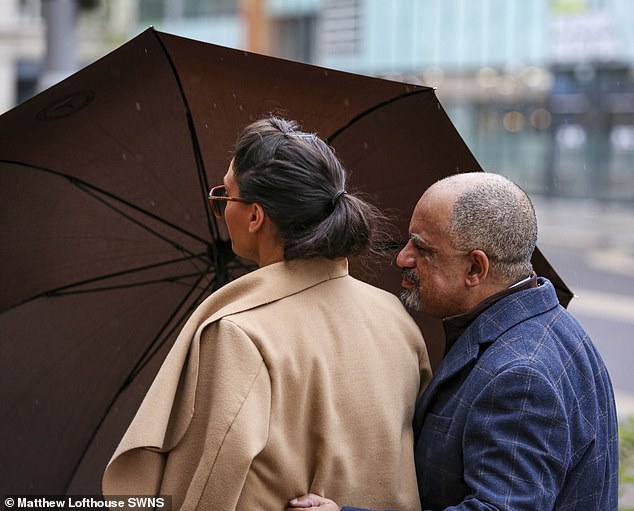 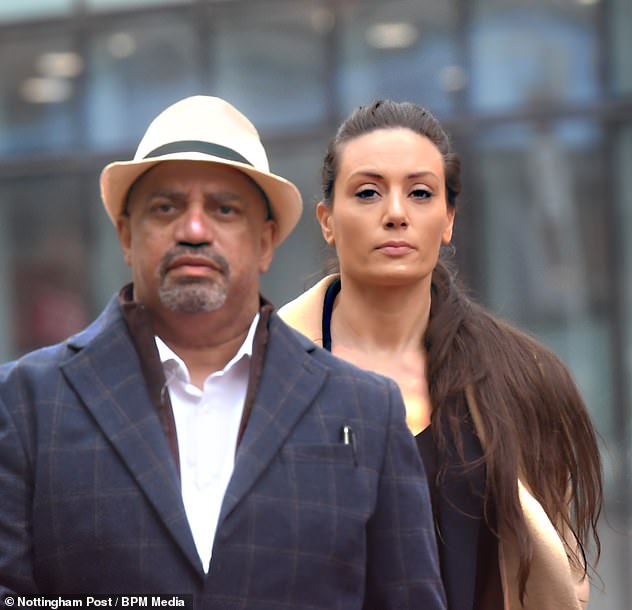 Phythian, 36, who starred in the 2016 Marvel superhero film Doctor Strange, alongside Benedict Cumberbatch and Tilda Swinton, was found guilty of sexually abusing a girl over three years, starting when she was 13 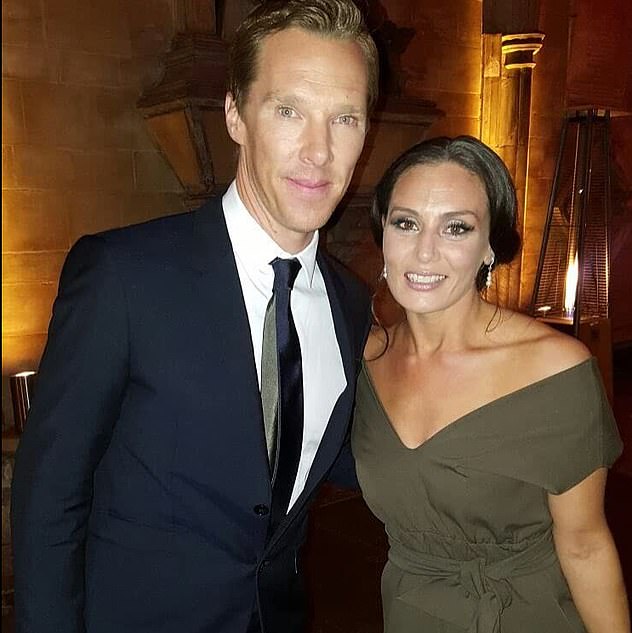 Phythian (pictured with Benedict Cumberbatch) and her Taekwondo ‘master’ husband Victor Marke, 59, were jointly charged with 14 historical counts of sexual activity with the girl

He added: ‘Victor groomed Zara as well as his other victims. He used his power and influence as a master of martial arts to dominate and control young girls.’

Martial arts enthusiast Paul, who once trained with the couple, told MailOnline: ‘Zara was very good at martial arts and was already a black belt by the time she started at Victor’s academy.

‘He took an instant shine to her and devoted a lot of time and energy on her development.

‘It was obvious that she was his favourite pupil, and she worshipped the ground he walked on.’

He added: ‘It was very odd when we found out that he and Zara were having a relationship because of their age difference and the fact that he was such a senior martial arts figure.

‘Juliet was devastated because she was left alone to bring up their baby.’

MailOnline can also reveal that Victor and Zara were friends with another prominent martial arts master Paul Drury, who was jailed for 15 years in 2015 for raping a girl shortly before her 13th birthday at his home and his academy.

Zara and Victor visited and performed at his Black Belt Academy in Dawlish, Devon around at around the time they were carrying out their own crimes against their teenage victims. 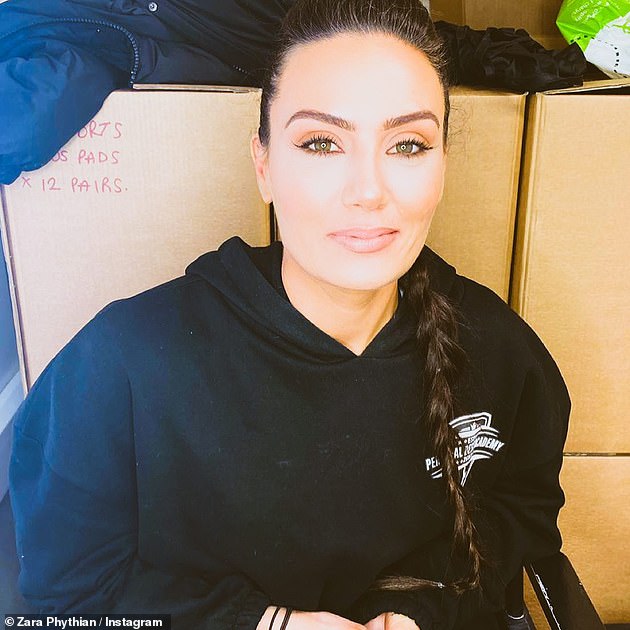 Jurors heard the alleged abuse began after the couple plied the girl with Captain Morgan dark rum, before Zara (pictured) ‘dared’ her to perform a sex act on Victor

Drury also posted a gushing interview with Zara in 2008 which was titled: ‘Looks like a model. Hits like Bruce Lee. The Zara Story.’

Francis McGrath, defending Victor, suggested that his two victims may have ‘colluded’ with each other, saying that the first girl had ‘given’ the second girl’s name to detectives.

He told jurors: ‘The two complainants in this case are not independent of each other. This is not a case where two people have gone to police independently and a link has been established.

‘You cannot eliminate the possibility there has been some form of collusion that has not been identified by the police.

‘Mr Marke does not need to satisfy you that it has not occurred. It is a possibility that we cannot safely eliminate.’

But both the victims who are now women denied that they had conspired together in any way, and their claims were believed by the jury.

Prosecutor Ahmad Hossain QC told jurors in his closing speech: ‘Is there any benefit to either of these women? What is the benefit of making up false allegations and putting themselves through this? 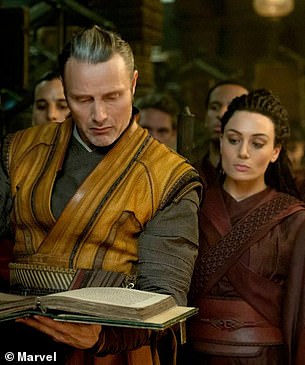 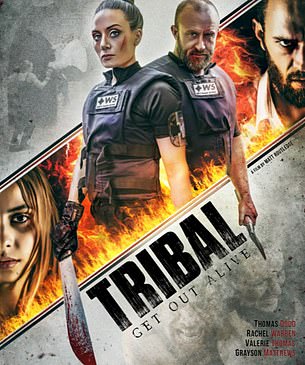 Ms Phythian as Zealot in Doctor Strange with Mads Mikkelsen (left). She is also the star of a number of martial arts action movies including Tribal: Get out Alive with another due out this year

‘You may feel you are drawn to the inescapable conclusion that they are telling the truth.

‘When you look at them closely the conclusion you can come to is that you can be sure what they said happened really happened.’

Earlier, he stated: ‘Both of those defendants commanded admiration and respect within the martial arts world and the prosecution case is that Victor Marke groomed these two separate complainants when they were children and that he used his position of trust and authority to make them feel special so that he could satisfy his sexual urges.

‘And, it is the prosecution’s case, that Zara Marke was part of that process and Zara Marke acted, as is alleged, with Victor Marke.’ 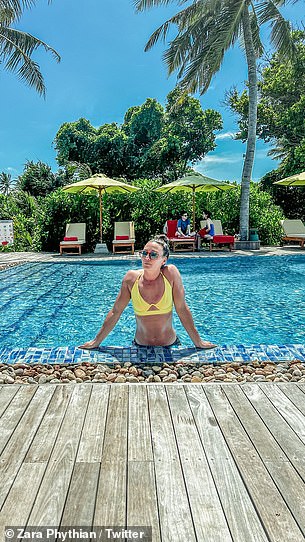 The second girl said she ‘would never have come forward’ if police had not approached her, and that she had planned to ‘die with my shame’.

But she claimed that she had recently become a mother, and felt she had ‘no option to speak my truth’ in a bid to stop anyone else being targeted in the same way she had been.

The court heard how Zara and Victor had been hugely respected and admired within the martial arts world.

Giving evidence, Zara strongly denied any sexual activity with the girl, telling the court that she had ‘lied to me all the time I have known her’.

Dressed in a smart grey trouser suit, Zara told the court how her film career had begun after she was ‘spotted’ while taking part in a martial arts tournament in the United States.

She began ‘working her way up the ladder’ and took part in Guinness World Record attempts on Sky TV, and did ‘lots of stunt work’.

Her big breakthrough came in 2016 when she successfully auditioned for the role of ‘Brunette Zealot’ in Doctor Strange, which grossed $677m at the box office.

She has also starred in other martial arts action movies such as ‘Tribal: Get out Alive’, and another due out this year.

Zara protested her innocence, saying said she had ‘never been in trouble with the police before’ and describing the claims against her as ‘bullshit’.

It was put to her under cross-examination that she had started sexual activity with the girl after suggesting they play a game of ‘dare’.

Zara replied: ‘That is not true, by the way. That is ridiculous.’

She went on to claim the alleged victim had ‘not been in my house at 13 or 14’, and that she ‘would not let her drink full stop’ before she was aged 18. 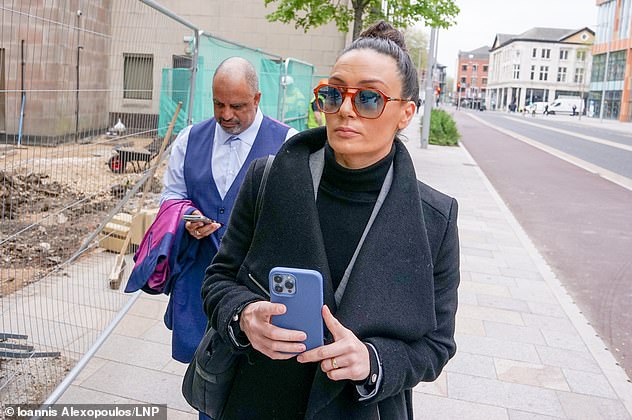 Hollywood actress Zara Phythian, 36, (with spouse Victor Marke arriving at court on May 3)

And when Mr Hossain listed a series of sex acts between her and the then-teenager, she replied: ‘It was not, and I think you know it was not.

‘That sexual activity that she described did not happen and is fabricated.’

Giving evidence of her role in Doctor Strange, she said: ‘It was a massive stepping stone. In early 2016 we did some pick-ups in New York and Los Angeles, and it (her role) was leaked to the media and there were photos of me and (actor) Mads Mikkelsen on the streets.’

She added she was offered a position on tour with Britain’s Got Talent winners Diversity – but had to turn down the dance group because she was defending a world record in India.

Zara told the court that her current business interests included running the Personal Best Academy martial arts school in Mansfield as well as owning an entertainment and production firm. 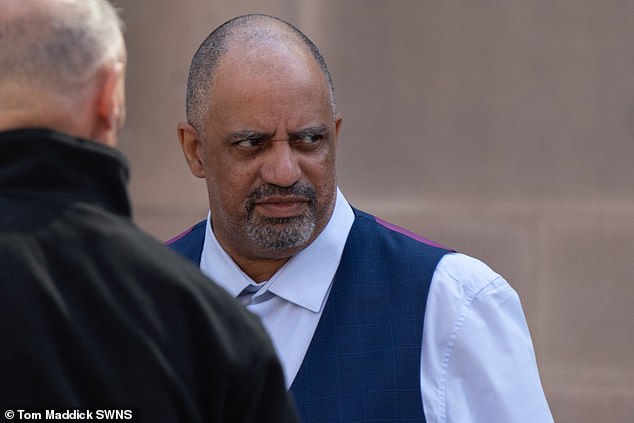 Zara and her husband (pictured) were arrested in March 2017 on suspicion of sex crimes involving the girl. The trial heard graphic details of their sex life, which included filming themselves having sex, taking part in swinging sessions and using a wide variety of sex aids

She also said in a police interview: ‘I am not a paedophile or a rapist, nor is Victor. I just feel sick right now and angry.’

Zara and her husband were arrested in March 2017 on suspicion of sex crimes involving the girl.

The trial heard graphic details of their sex life, which included them filming themselves having sex, taking part in swinging sessions and using a wide variety of sex aids.

Zara admitted in her police interview that she owned a number of sex toys including a ‘Rampant Rabbit’ and nipple tassels.

But she said her alleged victim, who referred to sex toys in her police statement, ‘could easily have gone through my belongings to find those’.

The court heard that Zara had a tattoo with Victor’s name in Chinese symbols written just above her vagina. Her victim was said to have copied her by having a similar tattoo in the same spot on her body. 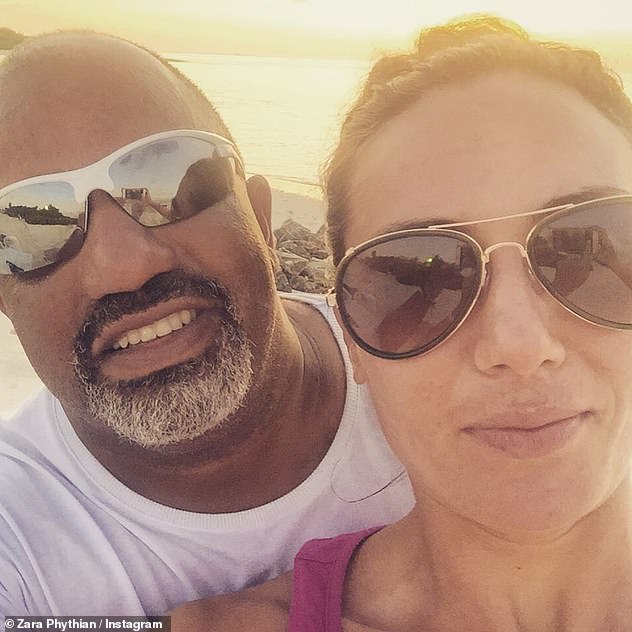 Zara admitted during the trial that news of her relationship with Victor had ‘caused a bit of stir’ when it started, although she denied that she was ‘infatuated’ with him Victor also strongly denied sexually abusing the girls and broke down in tears during his trial while he was giving evidence from the witness stand.

He accused one of the girls of having had drug issues and being involved with gangs, telling police she was ‘a thief, a liar and a problem child’.

Victor admitted having sex with her once, legally and consensually, when she was aged 18., saying: ‘I am not proud of it. It’s a low part of my life. I am ashamed of it.’

He claimed that the girl may have been jealous of his wife as the allegations were made to police shortly after Zara had appeared in Doctor Strange.

He embraced his wife when he returned to the dock. Character witnesses described him as ‘diligent, honest and passionate about his job’ and said he was ‘a decent, respectful and wonderful person’.

Despite the manner of their breakup, Victor’s ex-wife Juliet also gave evidence on his behalf insisting that he was not guilty of any sexual crimes.

When asked about how she felt when she first discovered that Zara and Victor were in a relationship she confessed: ‘It led to some frostiness.’ 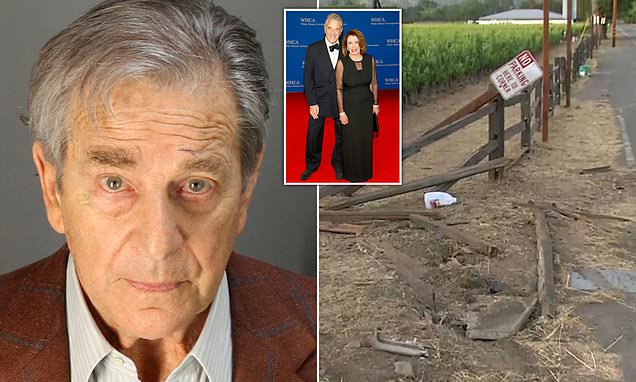 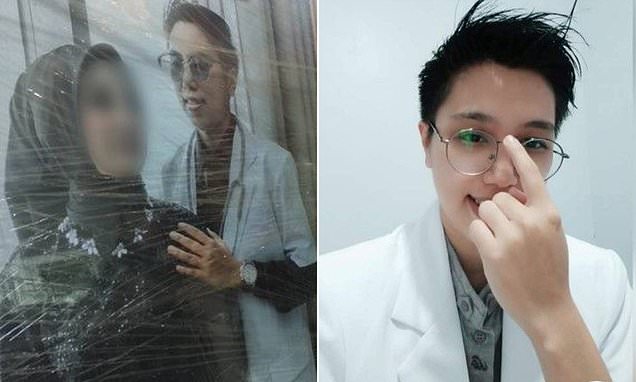 Wife 'learns that her husband of TEN MONTHS is actually a WOMAN - despite the couple being "intimate" numerous times - after her suspicious mother forces "him" to strip naked'Woman known as NA, 22, met Ahnaf Arrafif ... 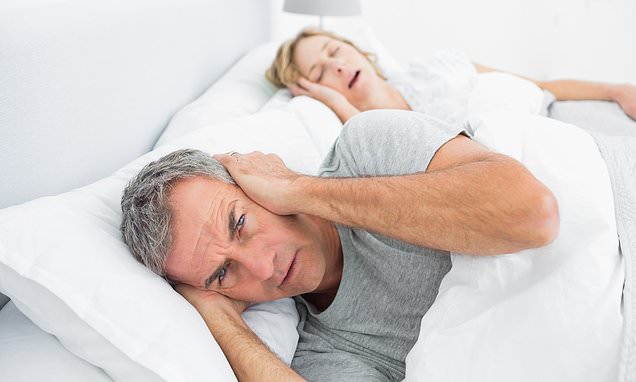