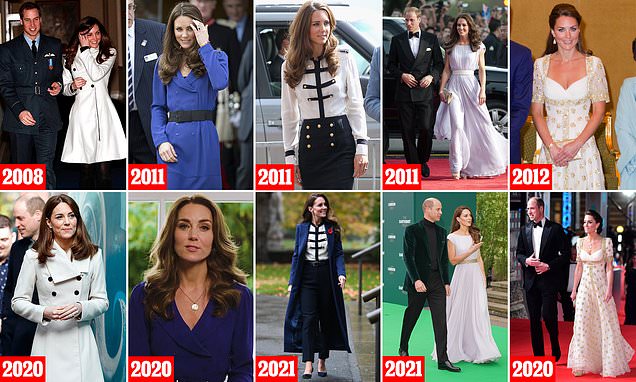 The queen of the re-wear! How the Duchess of Cambridge is STILL wearing pieces she had 10 years ago as she turns 40 – despite having had three children

Having maintained her slender frame over the past decade, Kate Middleton has often opted for pieces which she first wore before becoming a mother.

Many of her favourite pieces have come from her late twenties and early thirties, years before she gave birth to each of her children, Prins George, gebore in 2013, Prinses Charlotte, gebore in 2015 en Prins Louis, gebore in 2018.

In die afgelope maande, Kate has stepped out in a series of older pieces from her wardrobe, including recycling a dress she first wore in 2011 to attend Prins William‘s Earthshot Prize Awards.

Meanwhile she also stepped out in an Alexander McQueen blouse first worn months after her wedding to William as she visited the Imperial War in the autumn.

And it’s far from the first time the Duchess has hit headlines for adopting the frugal strategy, with the mother-of-three often rewearing her favourite items on multiple occasions.

Soos sy draai 40 Voor die langverwagte troue, the Duchess of Cambridge is still wearing pieces she first bought 10 jare terug – despite having three children (op die foto links, in 2011 and right at the Earthshot Awards in 2021)

Proving she has been dedicated to rewearing outfits since the start of her royal career, the Duchess has regularly stepped out in a £495 scarlet Luisa Spagnoli skirt suit.

She first wore the piece as a 29-year-old making a nostalgic trip back to St Andrews University in 2011 for only her second public engagement with William.

The Duchess donned the same suit again in 2014, having welcomed Prince George the year before, on her tour of New Zealand with Prince William.

Having welcomed Princess Charlotte in 2017, she donned the suit for a third time as she visited the Mitchell Brook Primary School in Neasden, noord-Londen, for a special assembly to mark Children’s Mental Health Week. 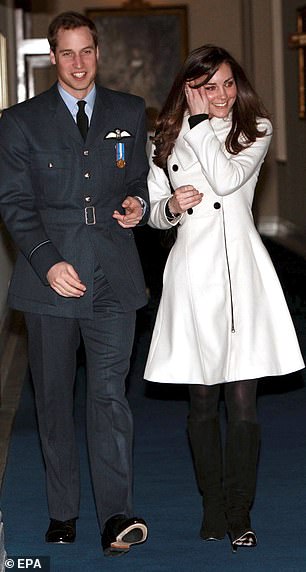 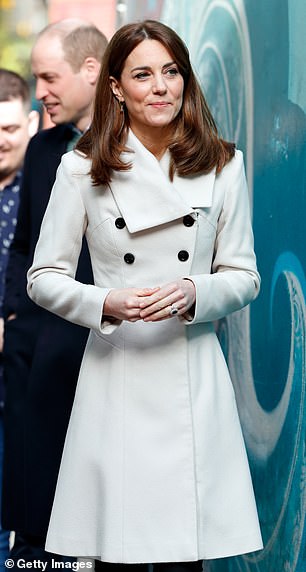 2008: Kate opted to wear a cream Reiss coat on several occasions as she stepped out with Prince William before joining the royal family (links). She wore the garment again in Ireland in 2020 (reg) 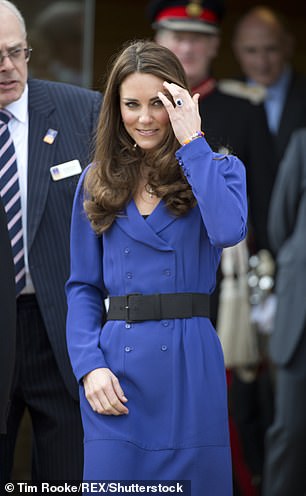 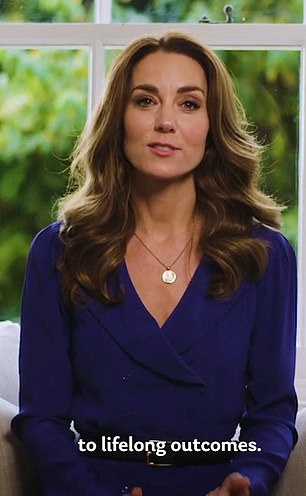 2012: The Duchess rewore a gown from Reiss to give her first public address at The Treehouse children’s hospice in Ipswich (links) which she first wore in 2008. The mother-of-three wore the gown again in 2020 to launch the results of her Early Years Survey (reg) 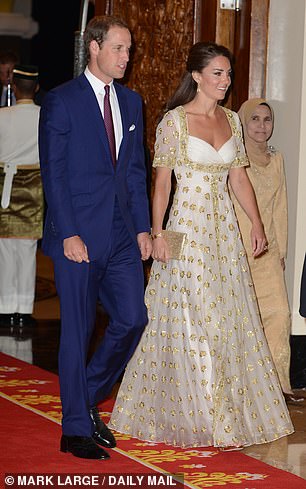 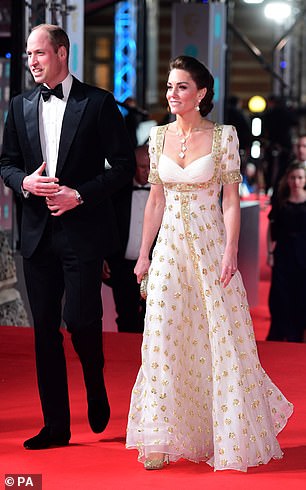 The Duchess of Cambridge wowed when she stepped out on the red carpet at the BAFTAs in February in 2020 (reg). However she decided to rewear an outfit for the occasion, donning a gown she first wore in Kuala Lumpur in 2012 (links)

She’s famous for her love of recycling and among her favourite pieces are a pair of £475 boots that she has owned for 17 jare.

Kate was first seen sporting a pair of the distinctive brown long tassel boots at the Game Fair at Blenheim Palace in August 2004.

The then Kate Middleton had just been thrust into the spotlight after news of her relationship with Prince William first emerged. The couple met as first-year students at St Andrews University.

The boots made another appearance exactly a year later as Kate attended the Gatcombe Festival of Eventing in Gloucestershire.

On that occasion she paired them with a pair of blue denim jeans, a green V-neck jumper and white shirt.

She wore a brown jacket and carried a bag in a matching colour, topping off the look with a similarly coloured trilby.

As the Duchess of Cambridge found her feet in the royal family, the boots stayed in the cupboard – at least on public appearances.

They were next seen when Kate and William headed out for a three-hour trek in Bhutan.

Royal watchers noted how the duchess did well to finish the hike to the famous Tiger’s Nest monastery despite wearing jeans, a blouse and a khaki-coloured vest.

Augustus, 2005: Just four years after meeting William as a first-year student at St Andrews and Kate was already in the spotlight. Op die foto, in the Penelope Chilvers boots, denim jeans, hemp, jumper and jacket at the Gatcombe Festival, Gloucestershire 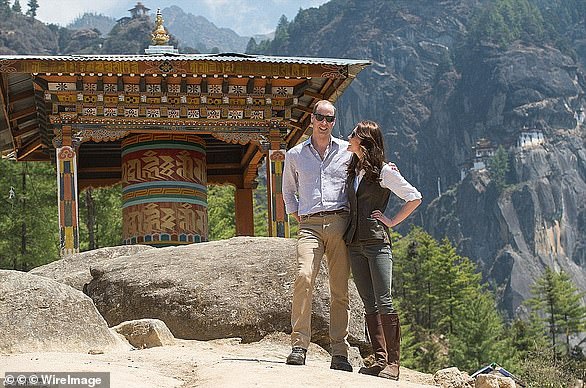 April, 2016: Posing at Bhutan’s famous Tiger’s Nest monastery, Kate beams at William. On her feet are the Penelope Chilvers boots, which she wore on the three-hour hike to the beauty spot 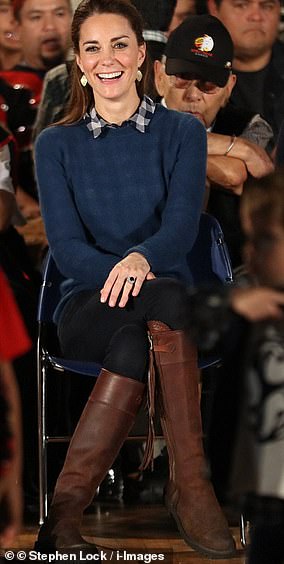 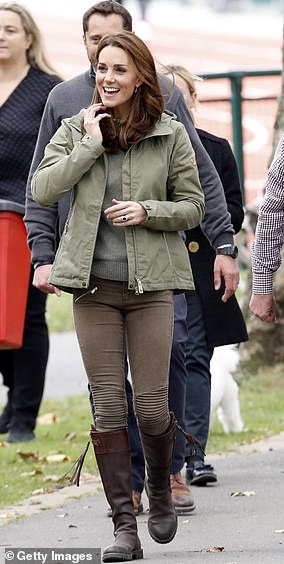 September 2016: The boots once again made the perfect choice when Kate and William braved the wind and rain on an outing during their royal tour of Canada in September 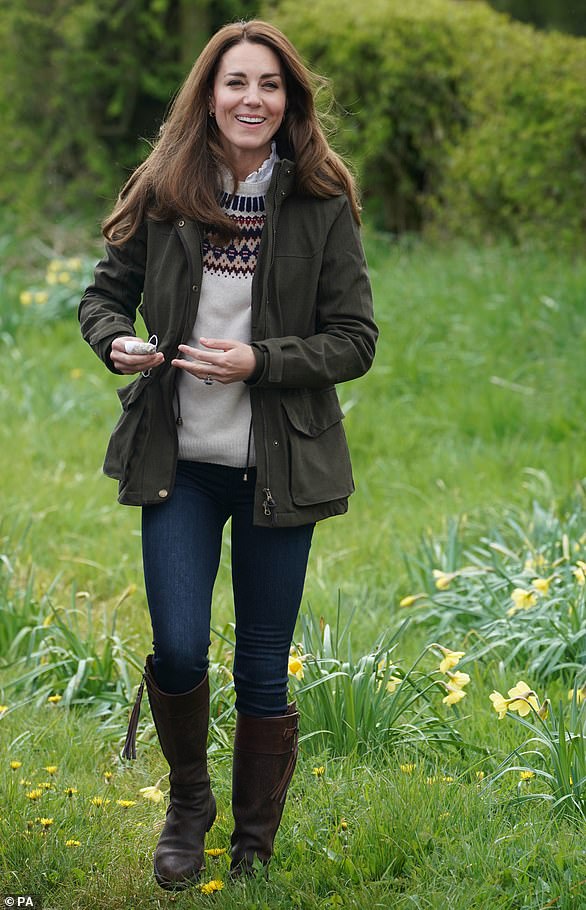 Kate donned a pair of £475 boots that she has owned for 17 years as she travelled up to Darlington to visit Manor Farm in April 2021, op die foto

However her Penelope Chilvers classics were certainly comfortable enough and the royal strode ahead with her husband.

The boots once again made the perfect choice later that year when Kate and William braved the wind and rain on an outing during their royal tour of Canada in September.

Kate opted for the practical look as she and William braved the elements on the remote Canadian island community of Bella Bella.

It’s not clear whether Kate has had the same boots in her wardrobe for well over a decade or she’s so fond of them that she bought a second pair.

She has similarly reworn her burgundy Paule Ka suit on a number of occasions, having first been seen in the outfit in October 2012 for a visit to the Middle Temple Inn in London.

Six years, and two children, later the Duchess slipped into the fitted jacket and skirt a she visited a neuroscience lab in the capital in November 2018.

It’s far from the first time the Duchess has reworn pieces from a decade ago.

In Maart 2020 during a visit to Dublin, the Duchess of Cambridge recycled a Reiss coat which she debuted when she joined then boyfriend William for cousin Peter Phillips’ 30th birthday party in November 2007. 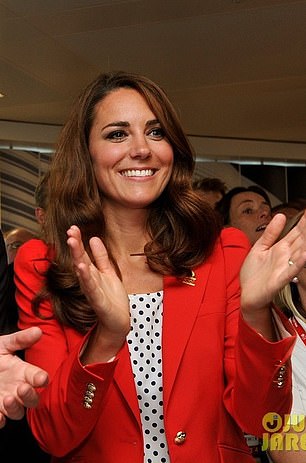 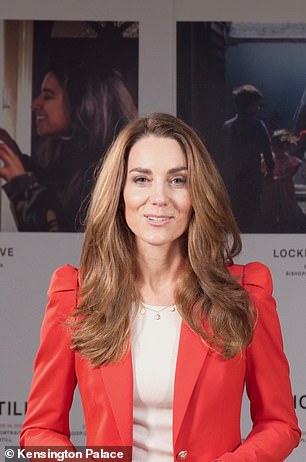 Dieselfde jaar, Kate opted to wear a vibrant red Zara blazer to watch the Olympics in London (links). The royal rewore the piece last year as she launched her Early Years survey (reg) 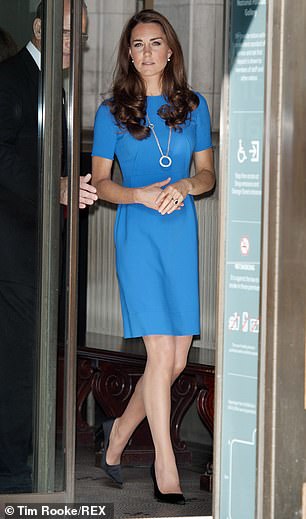 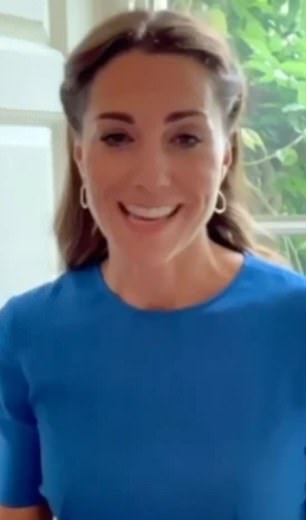 Kate recycled her beloved blue Stella McCartney dress for the fifth time as she appeared in a Zoom call promoting her community photography contest in June 2020 (reg). She first wore the piece to visit the National Portrait Gallery in 2012 (links)

It has remained in the wardrobe in the decade since but has been brought back out for the second day of their Irish royal tour.

In 2012, the Duchess donned a dark blue and green tartan coat dress as she visited St Andrew’s School in Pangbourne, Berkshire.

Sewe jaar later, she opted to wear the same dress as she visited Dundee alongside Prince William.

And it’s not just cosy coats and tailored suits Kate has made a habit of repeating over the years. 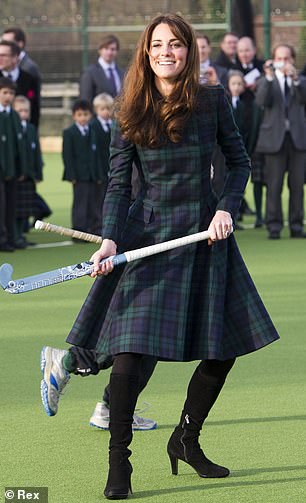 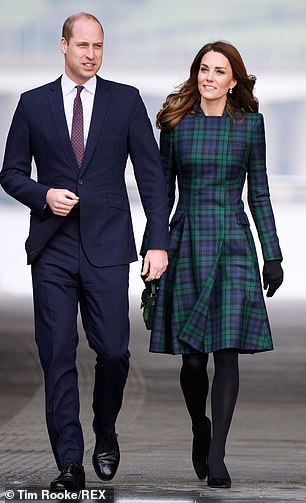 Meanwhile the Duchess has also reworn a tartan coat-dress she first wore to visits Berkshire in 2012 (links) on a number of occasions (reg, in 2019 visiting Dundee)

And it’s not just cosy coats and tailored suits! In 2012, the Duchess wore a teal Jenny Packham gown for the Olympic Concert (links), which she rewore in 2018 to the Tusk Conservation awards

Attending the Tusk Conservation Awards at Banqueting House, Londen in 2018, the Duchess wowed guests by recycling a sea green floor length lace gown by British designer Jenny Packham which she had initially worn back in 2012 to a gala event at the Royal Albert Hall to mark the countdown to the London Olympic Games.

Appearing at Kew Gardens yesterday, the Duchess opted for an emerald Erdem coat last worn in 2016 for the outing.

Keeping things simple, Kate wore her brunette locks loose around her shoulders and keep her accessories to a minimum.

The green coat appears to have been a favourite of the Duchess, who has worn it on a multitude of occasions over the years.

Having first stepped out in the garment on her 2014 tour of New Zealand with Prince William and a then months-old Prince George, she went on to wear it again for the start of the Tour de France race.

Meanwhile she went on to wear it again in March 2016 as she visited St Thomas Hospital in London.

Proving she has been dedicated to rewearing outfits since the start of her royal career, the Duchess has regularly stepped out in a £495 scarlet Luisa Spagnoli skirt suit (op die foto links, in 2011, sentrum, wearing the suit in 2014, en regs, wearing it again in 2017)

She has similarly reworn her burgundy Paule Ka suit on a number of occasions, having first been seen in the outfit in October 2012 for a visit to the Middle Temple Inn in London (links). She most recently rewore the garment in 2018, after welcoming her three children (reg) 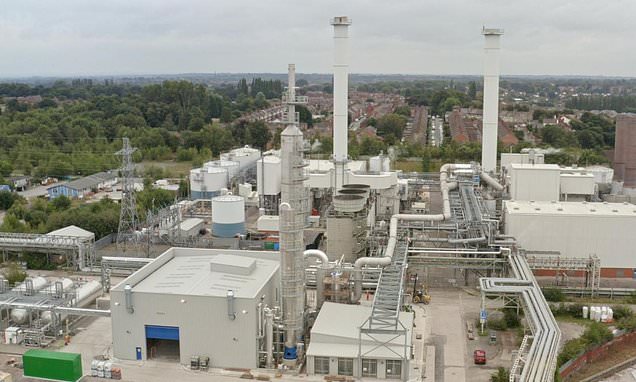 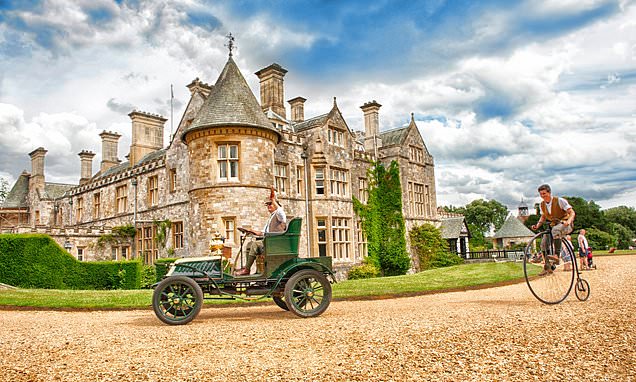 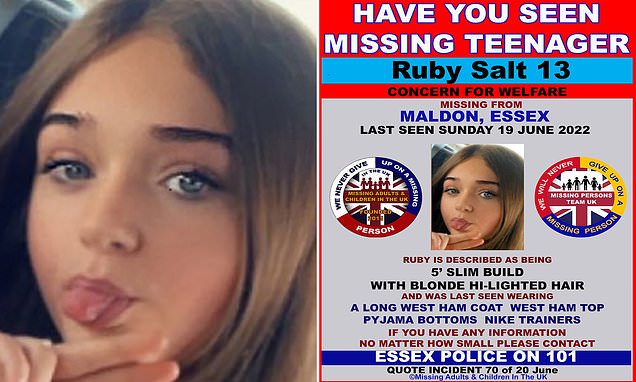