I’m A Celebrity Get Me Out Of Here’s Richard Madeley has been hospitalised after falling ill overnight.

The broadcaster, 65, who took part in his first solo trial which saw him covered in fish guts and rotting fruit during Wednesday’s show, was treated by medics before being taken for treatment as a precautionary measure.

An ITV spokesperson told MailOnline: ‘Richard was unwell in the early hours and was immediately seen by our on-site medical team.’

Scary: I’m A Celebrity Get Me Out Of Here’s Richard Madeley has been hospitalised after falling ill overnight

They added: ‘He’s since been taken to hospital as a precaution, the health and safety of our campmates is our priority.’

A source also told The Sun: ‘It was horrifying – campers were really upset and concerned, all of the crew and medics rushed to set to help him. It was a real scare for everyone involved.’

Gross! The broadcaster, 65, who took part in his first solo trial which saw him covered in fish guts and rotting fruit during Wednesday’s show

‘Such a disappointment,’ Richard said: ‘We’ll have something to eat tonight. I was really hoping to do better than that.’

At the end of the show, which was broadcast live, Richard was seen alongside the rest of the camp being told by Ant and Dec that all 10 of them would be heading to the trial area for the latest challenge. 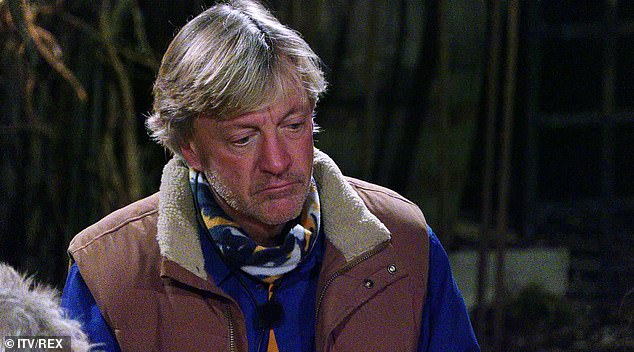 Challenging: The disheartened star only managed to earn four meals in his first solo trial, and later confessed it left him ‘chilled to the bone’

Ahead of his arrival in the castle, where celebrities typically live on basic meals of rice and beans, Richard admitted he’d done no preparation.

He told MailOnline: ‘Some people say cut down on food, but others say because you’re going to lose weight, so put it on [before you go in]. I’ve done neither.

He added: ‘I really hope I do get voted for the trials. The thing about this programme is you mustn’t go in to it if you take yourself remotely seriously. I don’t and I am thoroughly looking forward to being covered in god knows what!’

Candid: Richard is best known for his lengthy stint hosting This Morning alongside his wife Judy Finnigan, and in recent months has done regular stints on Good Morning Britain