Inside the secret MI6-base-turned-hotel, where kids can play ‘spies’ 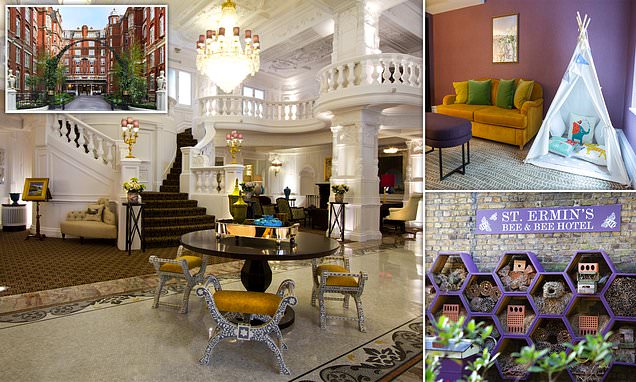 Inside the historic London hotel that used to be a top-secret M16 base, where children can play ‘spies’ durante il loro soggiorno – and get a buzz from the third-floor ‘bee resort’

The striking Grade II-listed Victorian red-brick building towers on either side of us as we walk along to the main entrance, which is fringed by lush green grass and pretty blooms in myriad hues.

Prime impressioni: it’s delightful. And that’s before we’ve even set foot inside. 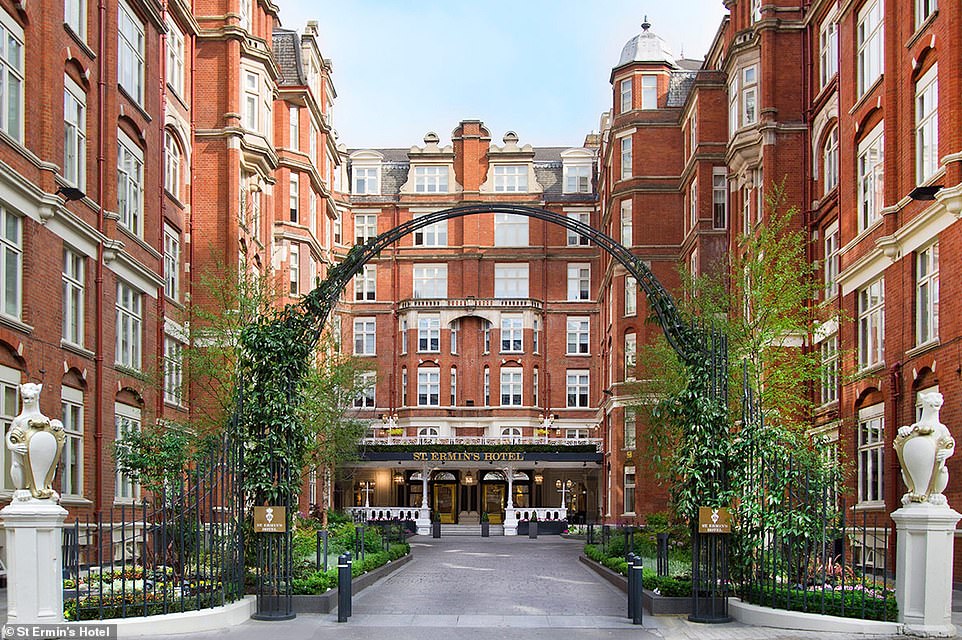 Carol Driver and her family check into the historic St Ermin’s Hotel, nella foto, which lies at the end of an impressively grand, tree-lined courtyard in London’s prestigious St James’s Park 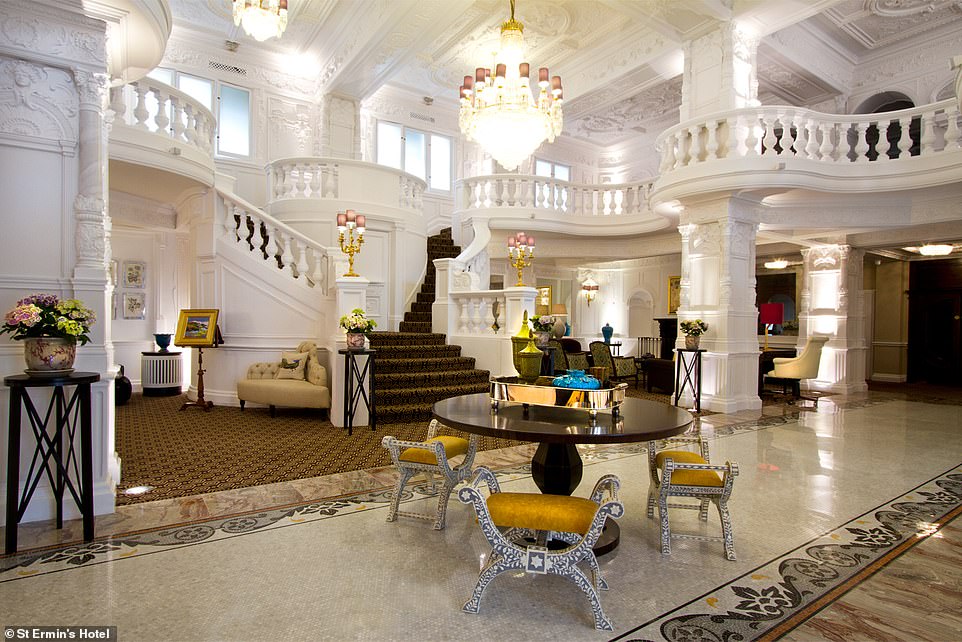 ‘Every inch of it has a story to tell – from its prestigious guests, to its exquisite decor,’ Carol says of the hotel. An entire floor of St Ermin’s was used as the headquarters by Churchill’s Secret Army, during World War Two – and M16 was stationed two floors above 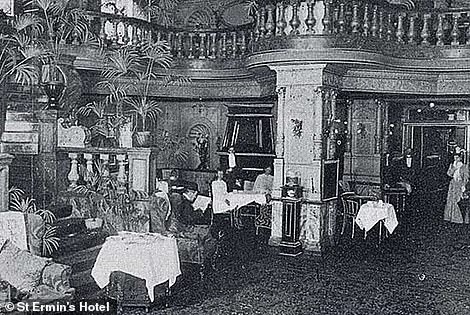 The location is impeccable too, just a stone’s throw from Buckingham Palace, the Houses of Parliament and Trafalgar Square – the perfect place to mark the Queen’s platinum jubilee year.

My husband and I are bringing our five-year-old daughter to test out four-star St Ermin’s new family-friendly offerings – a kids’ concierge service and two family suites.

Every inch of it has a story to tell – from its prestigious guests, to its exquisite decor.

però, not all its tales will ever be told, with some very top-secret missions having taken place within its walls.

The hotel has been at the centre of British intelligence since the 1930s, when it was known to MI6 as ‘The Works Canteen’. 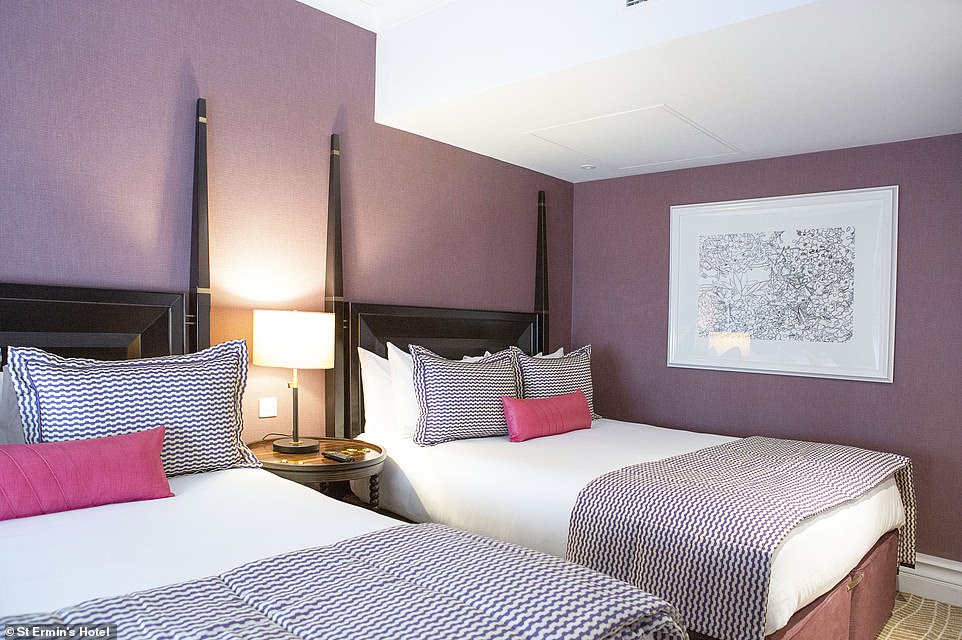 ST ERMIN’S HOTEL AND ITS LINKS WITH THE SAS, MI6 AND A DRAGON-SLAYING MONK

St Ermin’s Hotel is built upon the site of a 15th-century chapel dedicated to St Ermin (known by several names, including St Armel), a monk who in the 6th century fled Wales when an epidemic struck and settled in Brittany, where he became revered as a saint.

He clocked up a few miracles, including making spring water appear by banging his staff on the ground. He is also said to have defeated a dragon.

Hundreds of years later, Henry VII came to revere this refugee saint and believed that St Ermin saved his ship during a storm off the coast of northern France in 1483.

Nel 1889 St Ermin’s Mansions were built and as the hotel’s website explains, these formed the basis of St Ermin’s Hotel.

The mansion blocks were converted into a hotel in 1899, with the interiors created by Victorian theatre designer J P Briggs, who ‘created a dramatic collection of reception rooms with rich plasterwork… much of which is still in evidence today’.

Nel 1940 Winston Churchill held a high-powered meeting at St Ermin’s Hotel during which the Special Operations Executive (SOE, aka Churchill’s Secret Army) was formed. This group specialised in reconnaissance and sabotage and formed the basis of the SAS.

The hotel reveals that this group used a floor of St Ermin’s Hotel as its wartime HQ, with MI6 stationed two floors above.

Dopo la guerra, the hotel became associated with spying shenanigans, with double agent and eventual defector Guy Burgess ‘heavily rumoured’ to have used the Caxton Bar, where Churchill enjoyed glasses of Champagne, to meet spies from Russia and hand over secret government files.

SAVED BY THE BELL

In the hotel lobby hangs a Division Bell, which used to be rung to alert MPs that they had just eight minutes to get to the House of Commons to cast their vote. These bells, explains the hotel, were all located in the ‘Westminster Bubble’, buildings within an eight-minute walk of Parliament.

The hotel adds that a secret tunnel is said to be located under the grand staircase and could be used by MPs to reach the Commons in double-quick time.

An entire floor of St Ermin’s was used as the headquarters of Winston Churchill’s Secret Army during World War Two – and M16 was two floors above.

Spies and officers would exchange information, train new agents, and conduct job interviews – and there was a stockpile of explosives stashed in the rooms above where guests were sleeping.

Ian Fleming and Noel Coward were to be found in the hotel’s Caxton Bar – where Churchill sipped Champagne. And it was also the focal point for Peter Matthews’ libro, House Of Spies: St Ermin’s Hotel.

The hotel is as impressive on paper as it is in the flesh. The entrance leads to a sweeping staircase with a beautiful chandelier, and intricate original plasterwork.

There are artefacts, arte, books and memorabilia at every corner, with plenty of things to discover and discover about its history. So how does it hold up for the kids?

We make our way to our luxurious suite on the ground floor, overlooking the quiet entrance.

The spacious area is beautifully, and comfortably, decorated, with twin double beds, two stunning marble bathrooms and a lounge area with sofas and chill-out chairs. 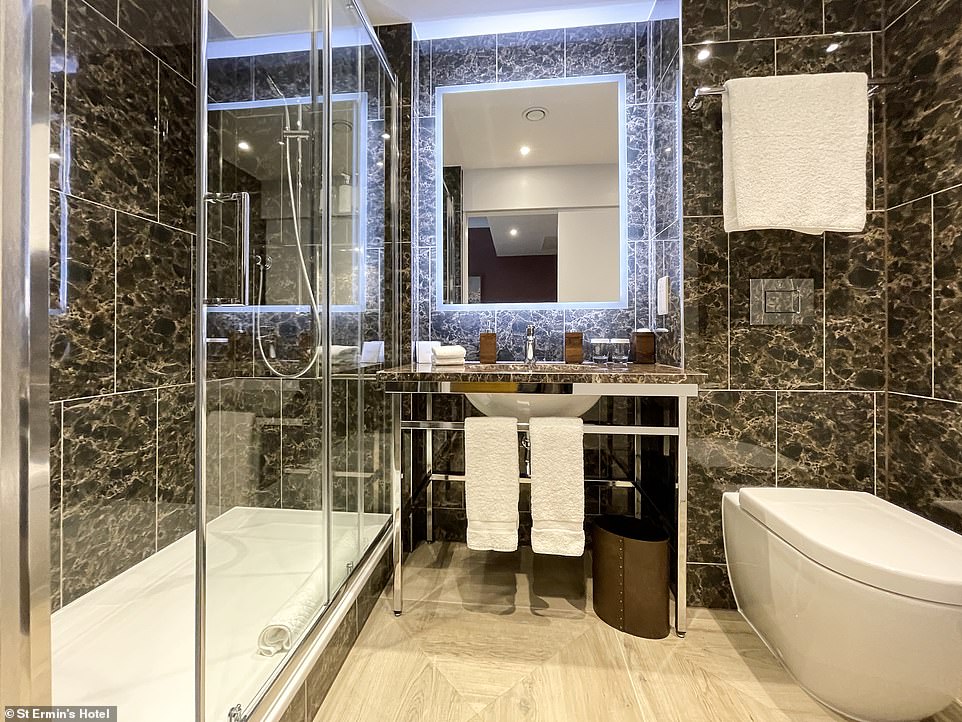 The family suite features two stunning marble bathrooms, one of which is pictured above 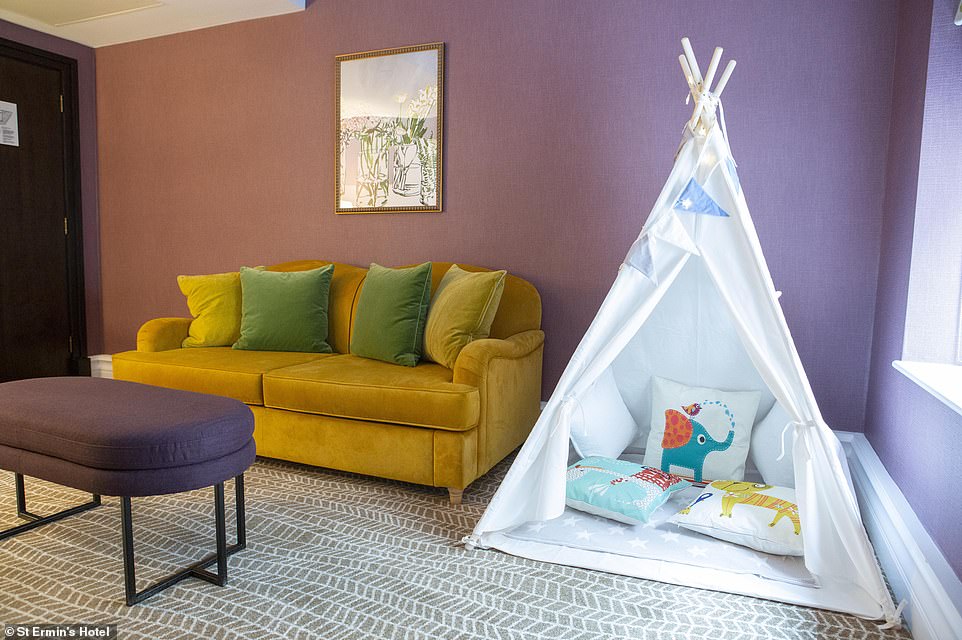 The spacious suite is ‘beautifully, and comfortably, decorated’ and features a lounge area with sofas and chill-out chairs, plus a teepee

For the little ones, there’s a teepee, as well as a collection of toys and books – certainly enough to keep our little one entertained.

Facilmente, parents with very small children can pre-order a variety of essential baby and toddler items to lighten the packing load.

Outside our lovely room (which we relax in for the afternoon, watching Mary Poppins and sipping cocktails – and mocktails – bliss!), there’s also a new kids’ concierge called ‘Buzz The Bee’, and family friendly experiences to suit all ages.

Up on the third floor is where to watch Buzz and 350,000 Buckfast bees at work making honey, which is then used by the hotel chefs. Their home? The St Ermin’s Bee & Bee Hotel. 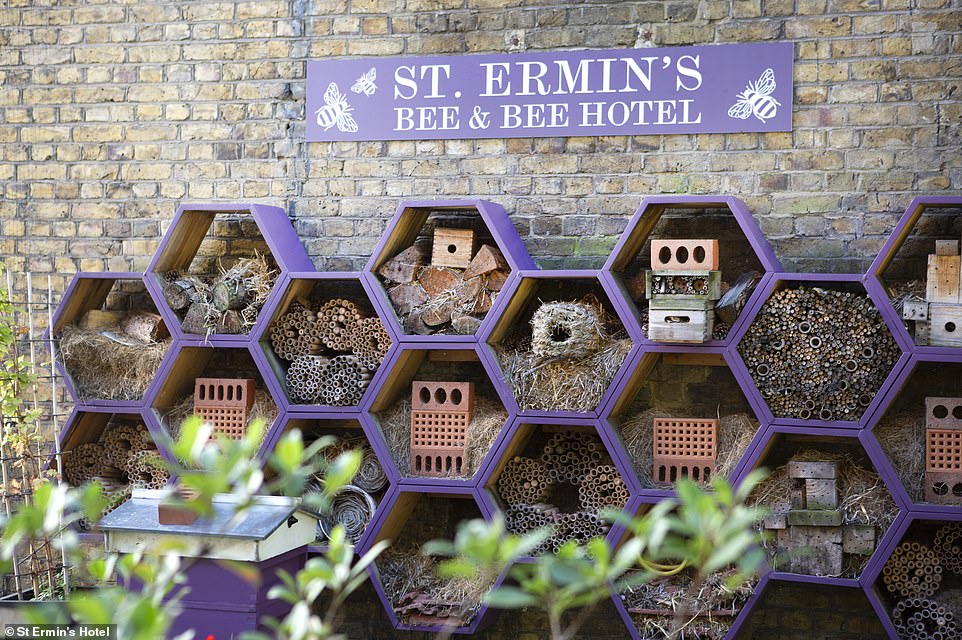 On the third floor of the hotel, guests can watch 350,000 Buckfast bees at work making honey 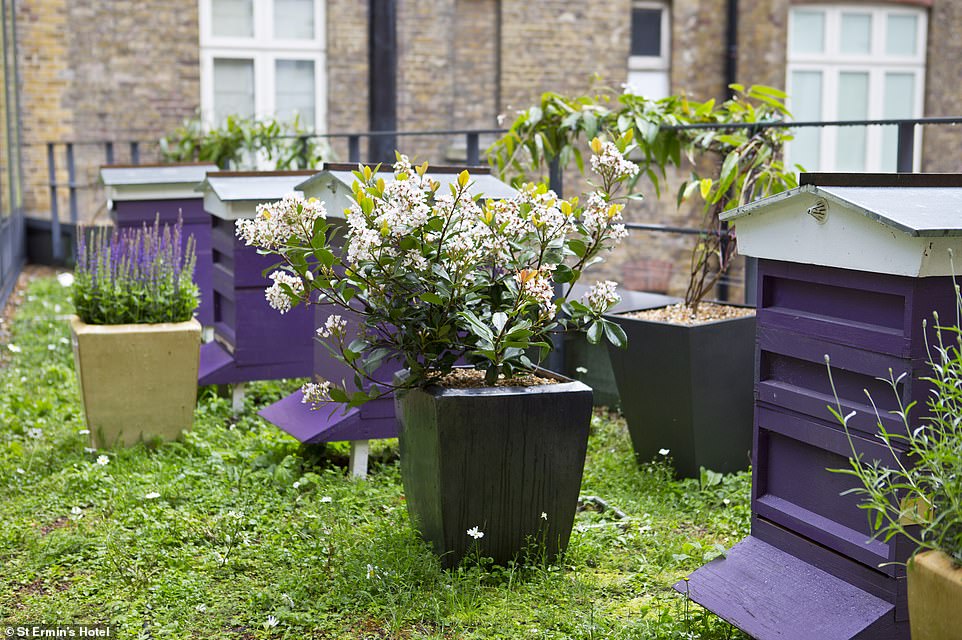 The bees inspired the hotel’s children’s book St Ermin’s Hotel: A Bedtime Story For Kids, which revolves around the adventures of a queen bee

The bees also inspired the children’s book St Ermin’s Hotel: A Bedtime Story For Kids, which is all about an adventure to save the queen bee and is placed in every room for young guests to delve into.

On check-in, our daughter is handed a spy activity book, and she spends the next hour on her own mission, uncovering St Ermin’s rich espionage history. Finding the answers to the fun questions takes her on an adventure, locating various artefacts dotted around the hotel.

She’s very pleased when she’s finished and discovered all the answers, and is handed a secret spy pass for a special mocktail in the Caxton Bar, where spies used to meet.

We head to the Tea Lounge where we’re booked in for afternoon tea. Like the rest of the hotel, it’s a magnificent affair. 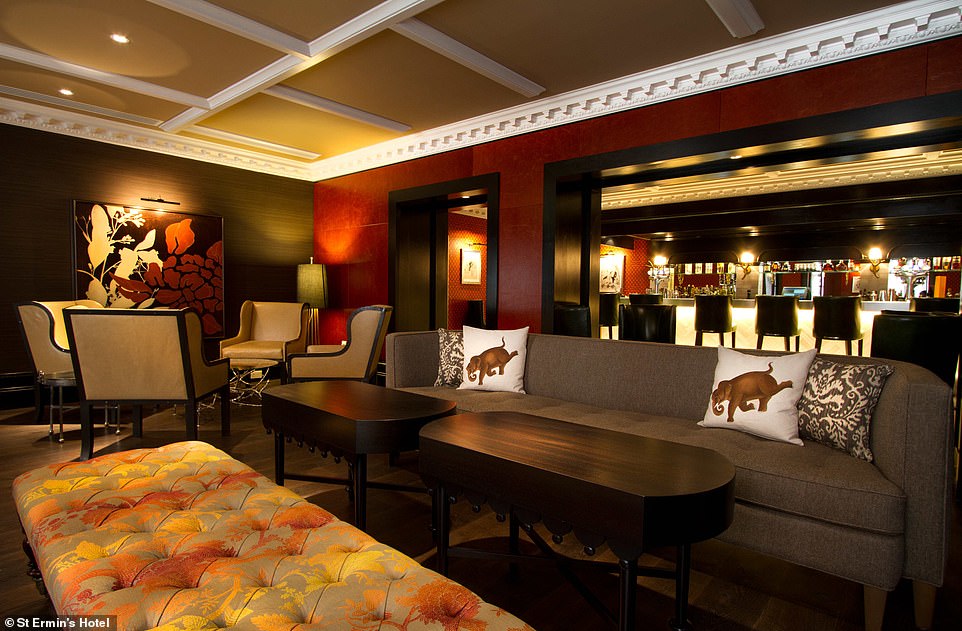 When children complete their spy activity books, they’re handed a secret spy pass for a special mocktail in the Caxton Bar (sopra), where spies used to meet

Our teas are a medley of sweet and savoury treats inspired by the seasonal ingredients on offer from the hotel’s rooftop kitchen garden. 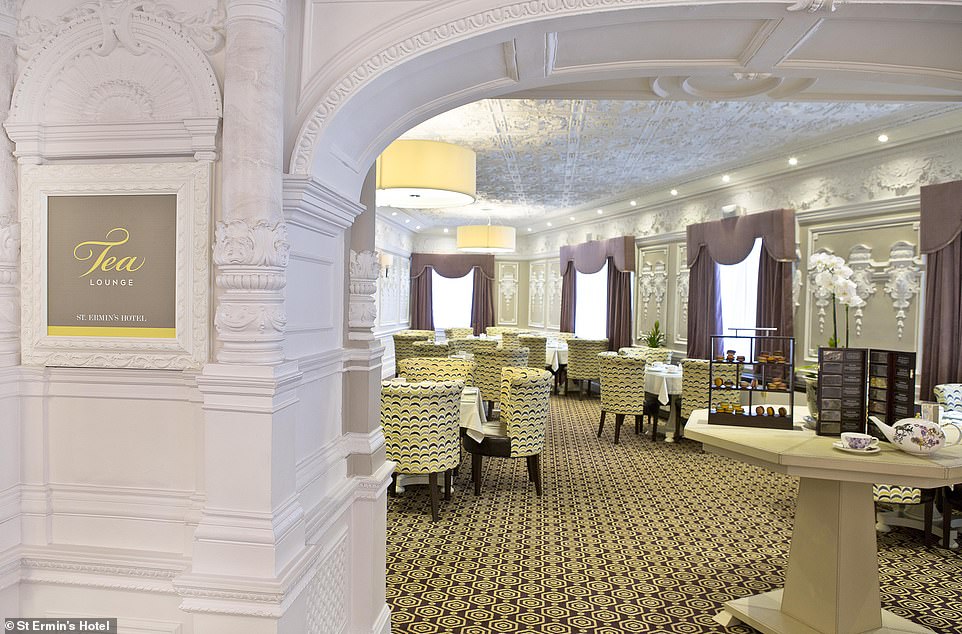 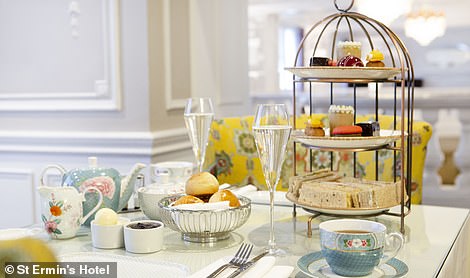 ‘Everything is delicious,’ Carol says of the afternoon tea

I opt for the vegetarian tea, with sandwiches filled with goat’s cheese, apricot and ginger chutney, grilled courgette, mint and creme fraiche and lightly curried egg mayonnaise with mustard cress.

Everything is delicious. Ovviamente, we order another round of sandwiches each, even though we know we shouldn’t – but they’re too good to resist. 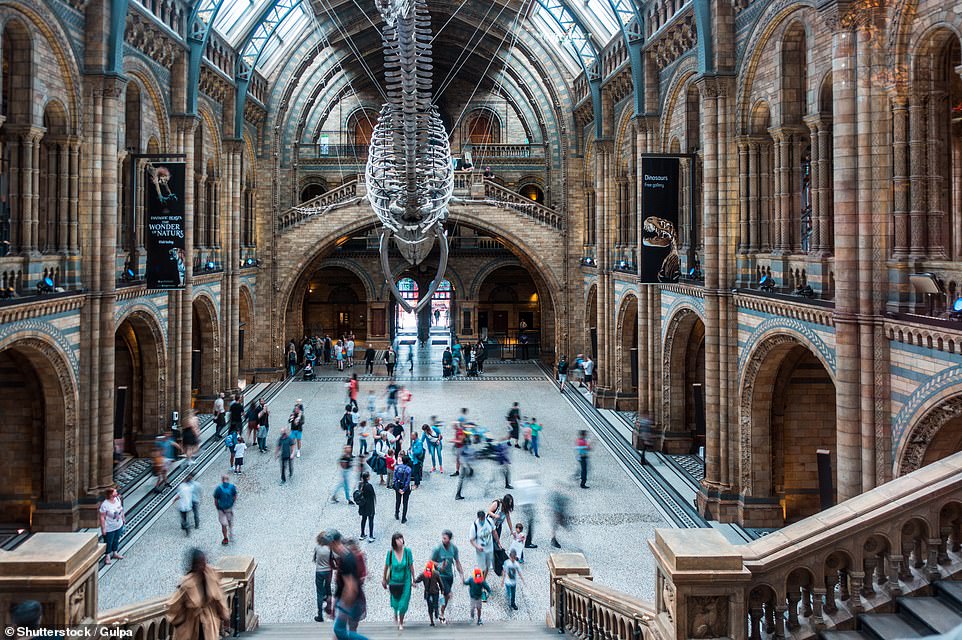 There’s plenty to take in nearby that appeals to the kids, including the Natural History Museum (nella foto) 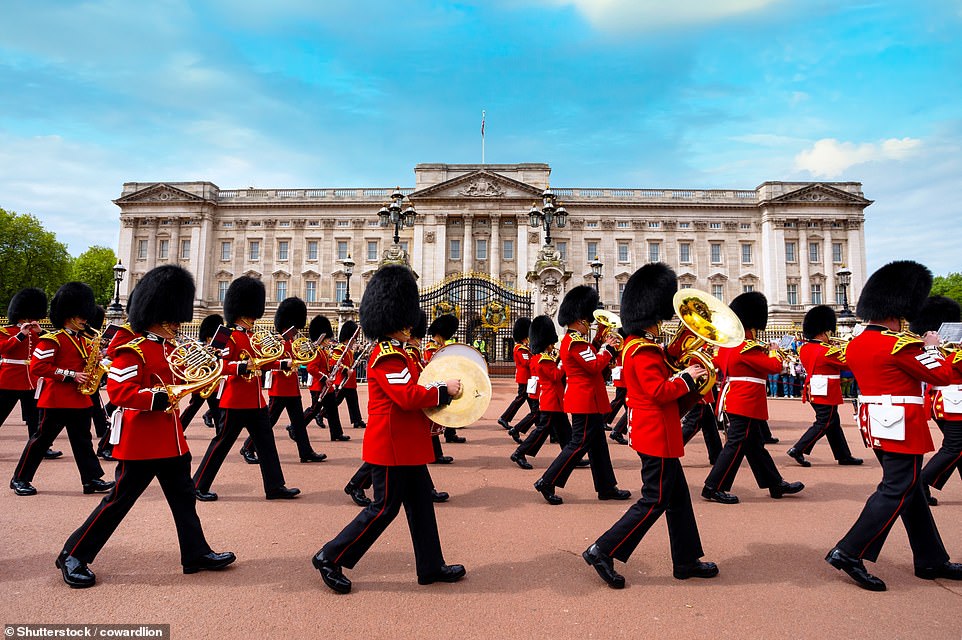 Our freshly baked scones are warm and soft, and served with clotted cream, and homemade jam. The infusions, nel frattempo, are from the award-winning The Tea Makers of London. And we enjoy a glass of Champagne too (bene, L'ex Spice Girl?).

infine, we dig into a range of brightly coloured sweets, including red velvet and cream cheese delight, and strawberry and pistachio tart. Our daughter loves the chocolate beehive with chocolate bee and biscuit.

We head out of the hotel to explore the local area – there’s plenty to take in that appeals to the kids: the Peter Pan Gardens in Kensington Gardens; London Transport Museum; the Changing of the Guard; Natural History Museum, and Hamleys.

It’s back to our lovely room to watch a movie, before we enjoy a sumptuous dinner at the relaxed Caxton Grill. 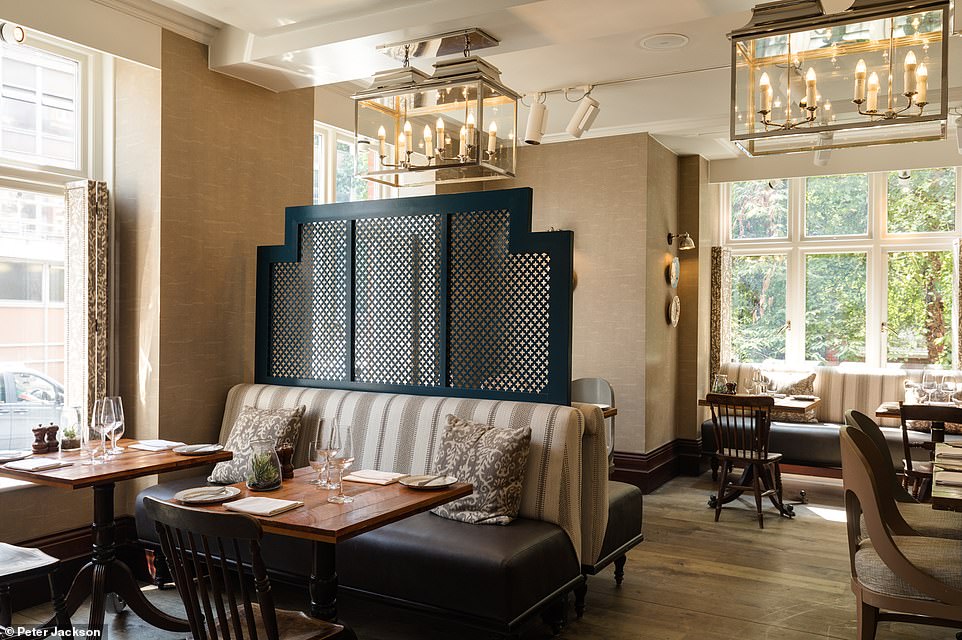 After a day spent exploring Central London, Carol and her family enjoy a ‘sumptuous’ dinner at the Caxton Grill, nella foto 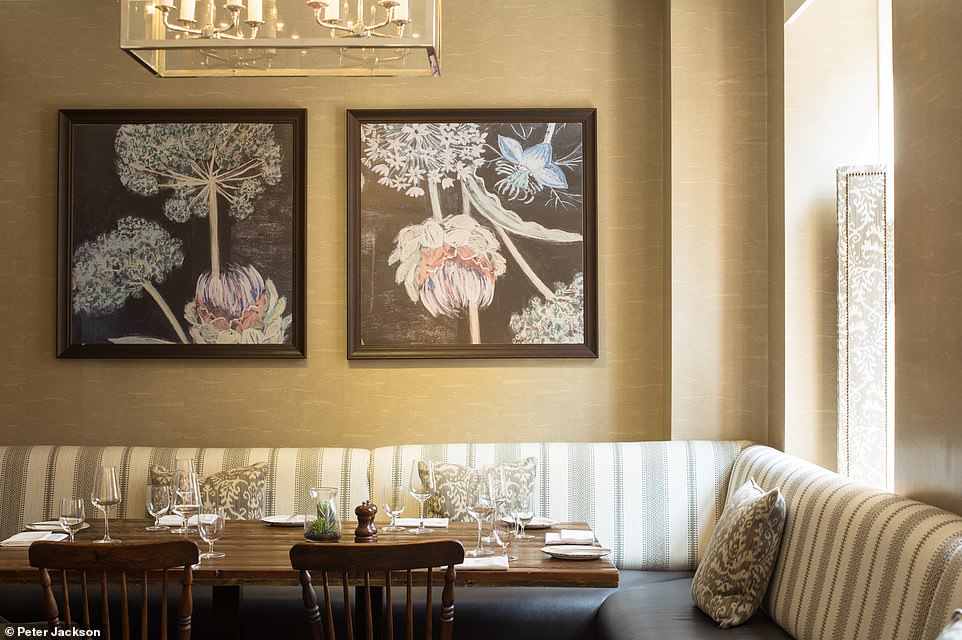 There are delicious dishes on the menu such as roasted Jerusalem artichoke served with pickled pear, chicory and nutritional yeast, burrata served with blood orange dressing, poppy seed croutons, and rib-eye steak with braised shallots, cod with a mussel sauce and roast sweet potatoes.

Our daughter tucks into a fresh tomato pasta before devouring a berry sundae. Delizioso!

Then it’s off to our super-comfortable beds, where no doubt our little one is dreaming of all things spy-related!

Cons: The heating wasn’t working in the room, but the hotel dealt with this really well, offering a change of rooms. This was declined but extra heaters were provided.