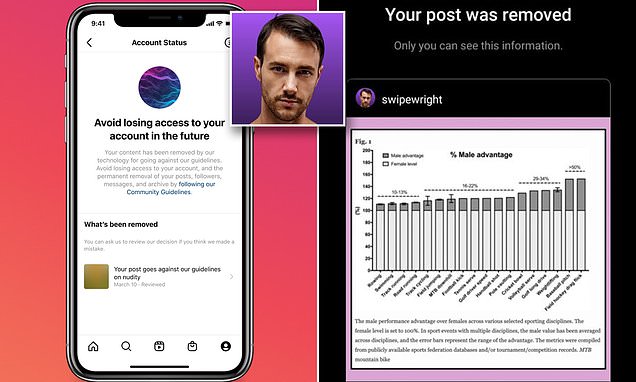 An evolutionary biologist was censored by Instagram after the woke social media giant removed his post about a transgender study by a prominent medical journal that said biological men were superior to biological women in a wide range of sports.

The study – titled Transgender Women in the Female Category of Sport: Perspectives on Testosterone Suppression and Performance Advantage – was published in Medicine & Sports in Sports & Exercise, a peer-reviewed science journal founded in 1969.

Colin Wright, who has been published in the Wall Street Journal and was in academia for 12 years, posted a chart from the study – conducted by researchers at University of Manchester and Karolinska University Hospital, Stockholm –  showing that biological males have a performance advantage over biological females across many Olympics-contested sports.

Similar scientific conclusions were reached in a study published in the British Journal of Sports Medicine called ‘How does hormone transition in transgender women change body composition, muscle strength and haemoglobin? Systematic review with a focus on the implications for sport participation’ – conducted by researchers at Loughborough University and Karolinska Institute, Stockholm. 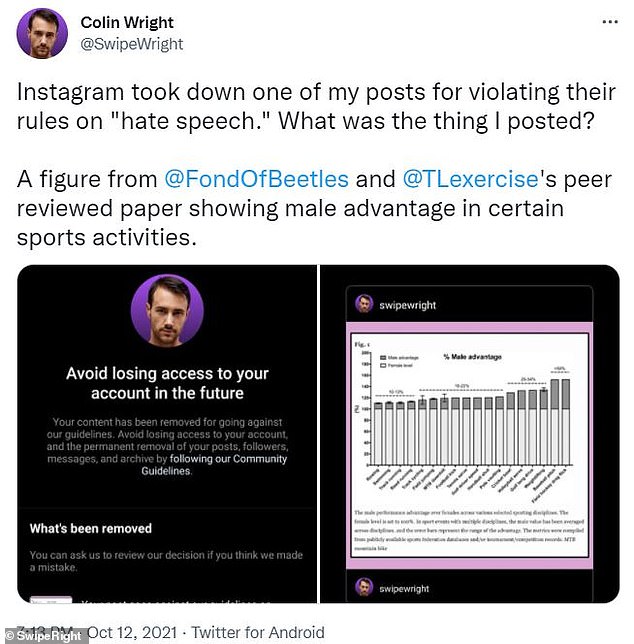 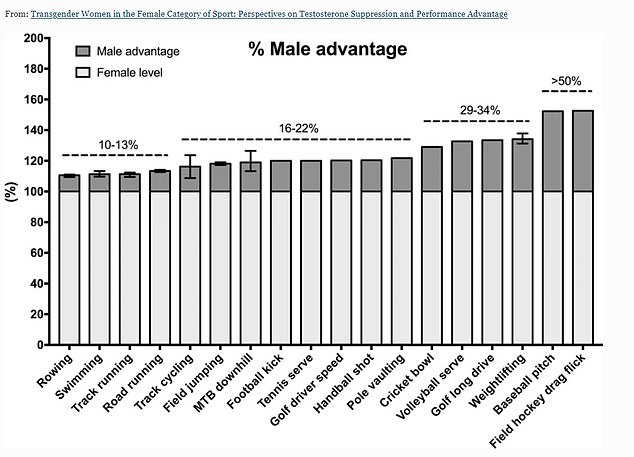 The chart was taken from a study published in Medicine & Sports in Sports & Exercise, which tested if the International Olympic Committee’s guidelines for transgender athletes eliminated the performance advantage male athletes bodies give them naturally

They each concluded that even after three years of hormone therapy transgender women on average still retain strength advantages over biological women, which may not allow for an even playing field in sports competitions.

The studies were conducted to test if the International Olympic Committee’s (IOC) criteria for athletes to be eligible to compete in the women’s category removes the performance advantage linked to male bodies.

The IOC has established that an athlete’s total serum testosterone levels to be suppressed below 10 nanomoles per liter for at least 12 months prior to and during competition. 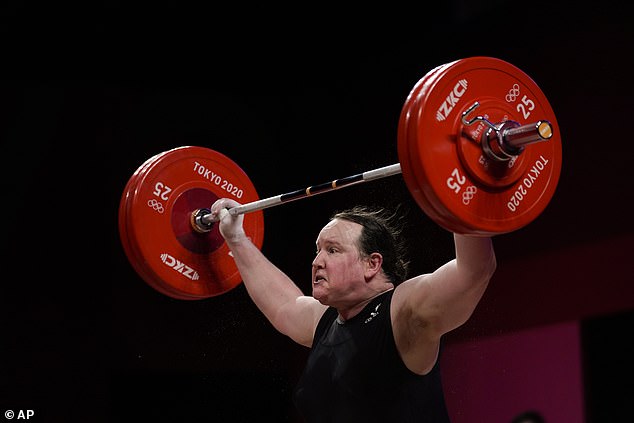 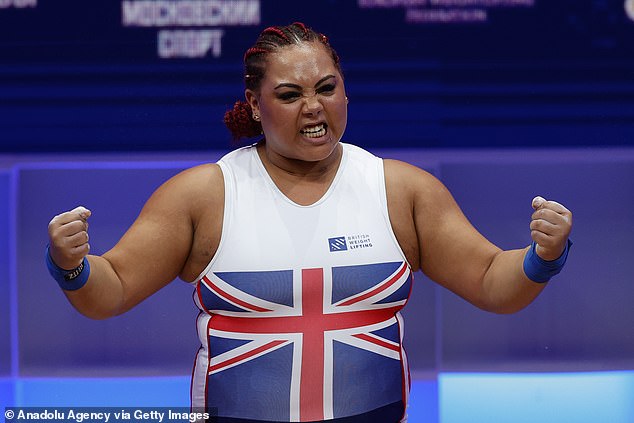 Both studies found that the reductions to strength, lean body mass, muscle size and bone density through the use of typical testosterone suppression regimes shows a minimal difference compared to the average difference between biological men and women, leaving them with a performance advantage.

The chart that Wright shared displayed the male performance advantage that cisgendered men’s bodies allowed them when compared to cisgendered women.

The illustration shows that while men have a performance advantage it varies over different sporting events depending on the level and type of physical or physiological skill or measure of success each sport requires.

The Sports Medicine study suggest that instead of a guideline for all transgender athletes, the individual sports federations should determine their own conditions for their events. 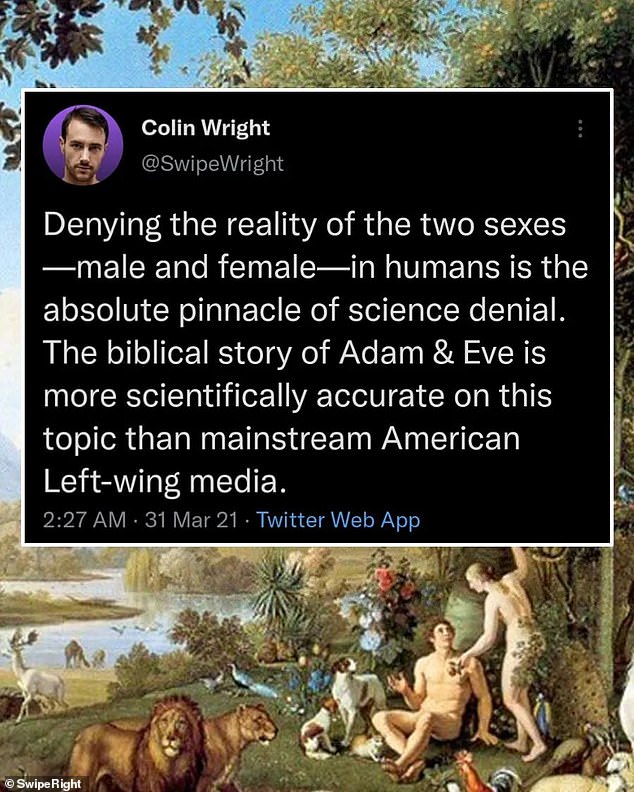 Wright was cited for violating the social media platform’s Community Guidelines on hate speech and symbols (Pictured: Wright is an evolutionary biologist who argues in defense of the gender and sex binary which he claims is assigned at birth) 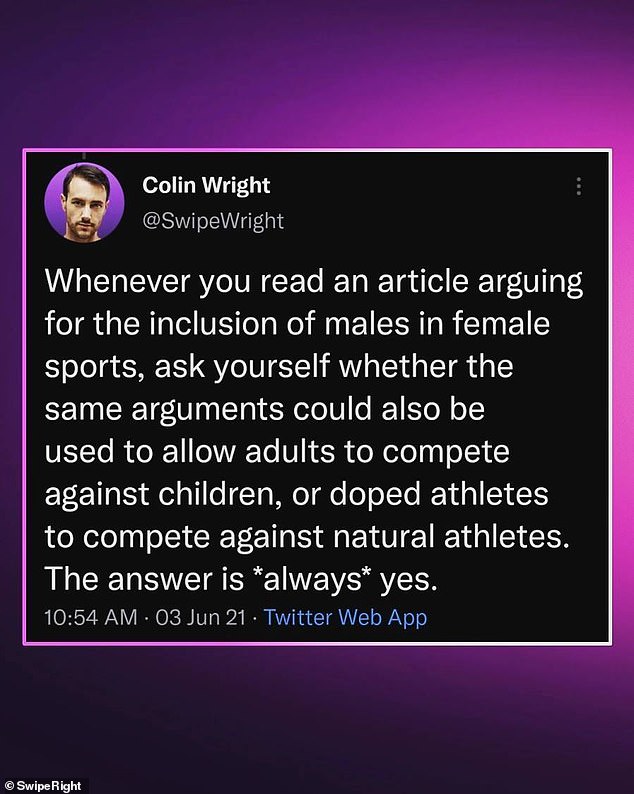 Wright posted the image of the chart as part of his defense of ‘the reality of the two sexes’ and that children should ‘compete in sports with their own sex.’

Many of his posts comment on bills that are being introduced by more than 20 states across the country prohibiting transgender girls from competing on girls’ sports teams – despite most sponsors’ inability to cite an instance that has caused problems in their community.

Wright avidly rejects ideas of gender and sex fluidity and often posts his stance on his social media accounts.

He told DailyMail.com that he is ‘extremely careful’ not to post anything ‘mean-spirited’ or target any individuals but said his views are criticized as being transphobic.

He took to Twitter to show that the post of the scientific chart was removed from Facebook-owned Instagram for violating Community Guidelines on hate speech or symbols.

Wright tweeted that he was unable to appeal the social media company’s decision claiming that they ‘lied’ when they wrote ‘You can ask us to review our decision if you think we made a mistake.’  Instagram also warned that he risks ‘losing access’ to his account if he is violated their Community Guidelines again.

Although his social media accounts are filled with his controversial commentary on sex and gender, he says he has never been told that he violated the platform’s policy before and was given no warning.

The evolutionary biologist is a managing editor for Quillette, an online magazine associated with the intellectual dark web – an informal group of renegade thinkers who oppose identity politics, political correctness, and cancel culture in academia and the media.

Last year, he left academia after struggling to get hired, which he claims was due to ‘ideological policing’ and his position ‘that biological sex is binary and not a spectrum,’ according to the Daily Caller.

According to the Instagram Community Guidelines, the platform will ‘remove content that contains credible threats or hate speech’ but notes that it may be allowed ‘when hate speech is being shared to challenge it or raise awareness.’

As Instagram and its parent company Facebook have come under fire for it’s lack of censorship and unsafe practices, they recently announced their commitment to ‘sharing more information about the nuts and bolts of Instagram.’

One of the new features, Account Status, will ‘give people more information’ about post that they reported and to inform people if their post went against the Community Guidelines.

The Request a Review feature, which Wright tried to use, allows users whose content has been deemed in violation to dispute the claim against them. 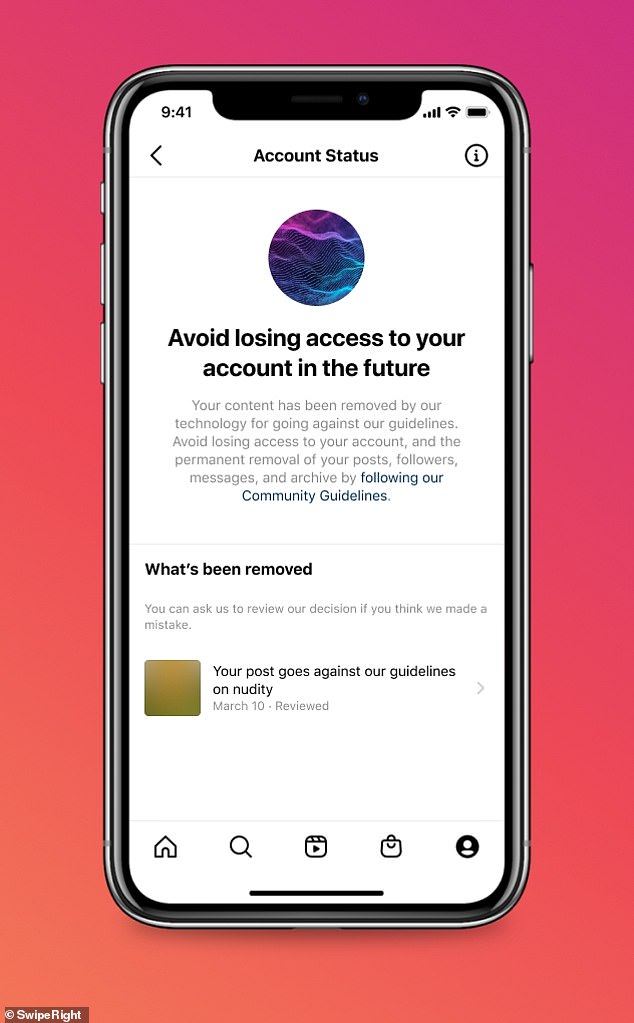 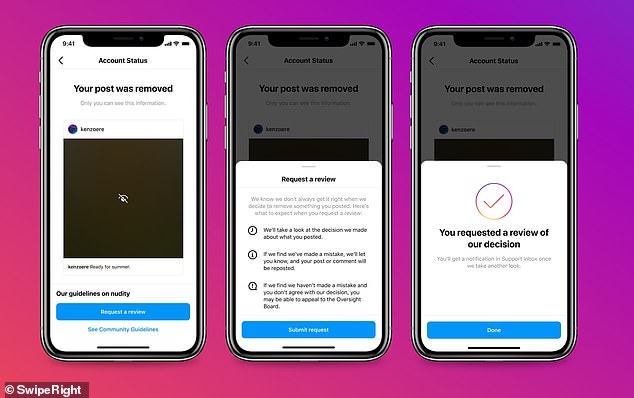 Both features were introduced last year but will be updated ‘over time’ although the specifics of the updates have not been shared.

Since its creation, Instagram has come under fire for its censorship with debates surrounding nudity, drug use, the Israel-Palestine conflict and COVID or election misinformation.

In 2020, the social media platform strengthened its rules on hate speech and ‘took action on 6.5 million pieces of hate speech’ 95% which they identified before it was reported.

This year, Instagram introduced the Hidden Words feature which allows viewers to filter out offensive words, phrases, and emojis.

The platform’s review process for inappropriate material and Community Guidelines are not clearly explained.

Despite their vague claims of transparency, Instagram’s process to review and remove offensive content has continued to be condemned for taking action on smaller infractions while ignoring major offenses.

Many meme pages complain about being suspended or deleted often without ever hearing back on their review request.

Meme account @soaking_wet_angel (which is now on their fourth account) says they were first suspended for solicitation after posting a parody Coachella lineup poster listing the names of other meme pages.


Krister Larson claimed in a Mashable article that his meme account @girl_storag3 was shut down for hate speech and bullying after posting a meme which read, ‘I am not your bestie. I am a random meme page admin that you have never met.’

Yet just last month, American tennis star Sloane Stephens shared some of the sickening and threatening racist messages she received on the app after her third-round defeat during the US Open. She said that disturbing messages like the ones she posted are commonplace to her.

Irish footballer Tyreik Wright was also flooded with racist messages via Instagram following a match. One of his offenders was eventually taken to court and ordered to pay nearly $700 for his outrageously disgusting messages.

A leaked internal report showed that Facebook was repeatedly made aware of the harm that their app caused, specifically to teenage girls, but continued to ignore their own data to continue to profit off their dangerous algorithm.

In her testimony, Haugen said that Facebook founder Mark Zuckerberg is only ‘accountable to himself’ and has even been directly involved in company decisions that saw Facebook putting profit over ‘changes that would have significantly decreased misinformation, hate speech and other inciting content.’

Texas Governor Gregg Abbott introduced a new law which would allow any state resident banned from social media platform for their political views to sue.

But groups representing Facebook, Instagram, YouTube and Twitter are suing the state for the new law as conservatives have accused these social media giants of stifling their voices and disproportionately targeting them over liberal and Democratic users.

The social media companies claim that the law would prohibit them monitoring hate speech. The suit claims, ‘At a minimum, H.B. 20 would unconstitutionally require platforms like YouTube and Facebook to disseminate, for example, pro-Nazi speech, terrorist propaganda, foreign government disinformation, and medical misinformation.’

A similar bill was shot down in Florida but new ones are now being considered in Utah, North Dakota and Wisconsin.