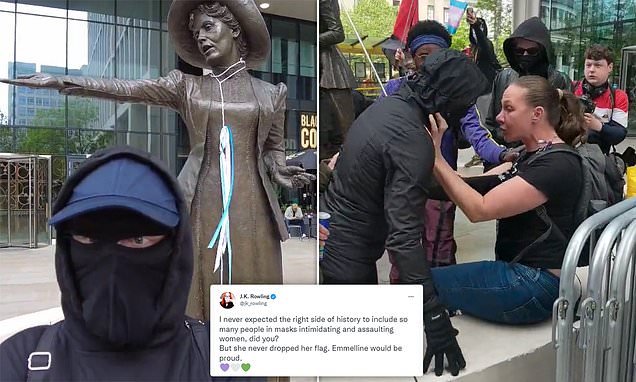 ‘Emmeline would be proud’: JK Rowling praises feminist who ‘never dropped her flag’ as she stood up to masked trans activist thugs blocking statue to suffragette icon and ‘intimidating and assaulting’ women defending their rights

This is the extraordinary moment a lone woman waving a purple, white and green Suffragette flag was ‘manhandled’ by a gang of masked trans activists.

The unnamed woman supporting the campaign group Standing For Women (SFW) was assaulted during a counter-protest by the Manchester Trans Rise Up (MTRU) movement next to the city’s statue of Emmeline Pankhurst in St Peter’s Square.

The two groups clashed after the trans activists arrived to disrupt SFW’s speaking event in front of the statue as part of an event which said it aimed to reclaim ‘a part of Manchester for women’s voices’.

And one woman with a suffragette flag was attacked by the masked mob, described online as men and trans men, who tried to pull her down off a wall and grabbed her by the arms – but she clung on to her flag throughout. And remarkably a police officer at the scene appears to lecture the assaulted woman, rather than tackle the group in balaclavas.

Footage of the incident also suggests that trans activists were yelling that the lone protester was a ‘fascist’ and a ‘Nazi’. MTRU removed the suffrage colours and put a trans flag around the Pankhurst statue’s neck. One feminist confronted the masked group and asked them to ‘blink once for yes, twice for no’ if they thought they were helping the trans cause.

Harry Potter author JK Rowling, shared the footage of incident on Twitter and said: ‘I never expected the right side of history to include so many people in masks intimidating and assaulting women, did you?  But she never dropped her flag. Emmeline would be proud.’

Ms Rowling, who has been criticised by Harry Potter stars including Emma Watson for her campaigning for safe spaces for women, also mocked the masked mob who turned up yesterday.

She wrote: ‘There is no conflict between women’s rights and our ideology. To prove it, we’ve dressed up as ninjas to block public access to a statue of a suffragette. We’re confident this has done wonders for our cause and definitely isn’t an unintentionally hilarious own goal.’

Manchester Trans Rise Up claimed the day as a victory on Twitter, with supporters claiming they would be on the ‘right side of history’, and declaring: ‘They didn’t get hold of the statue at any point. We claimed the space for for the entire time. Well done’. But members denied the group in masks were part of their planned protest. 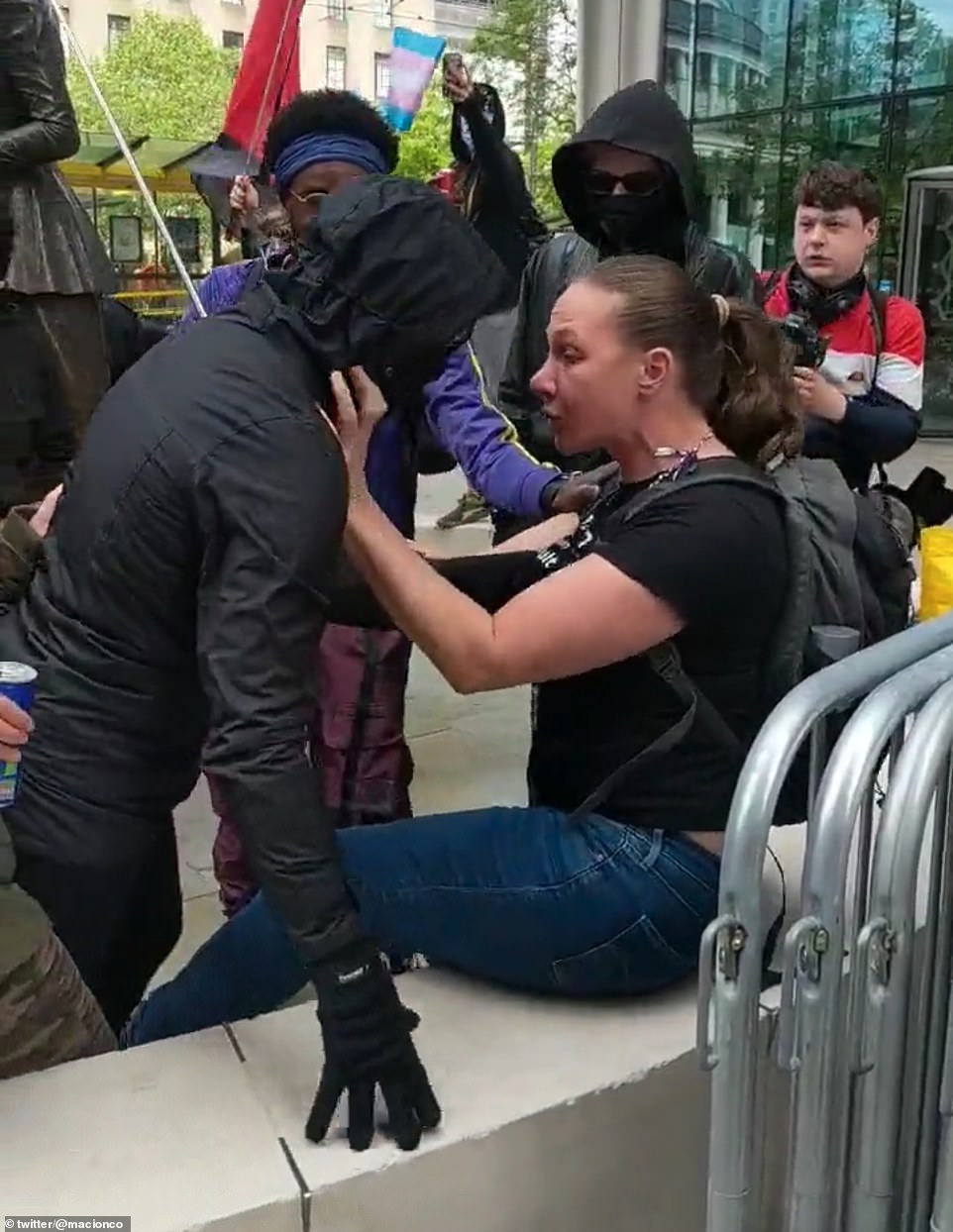 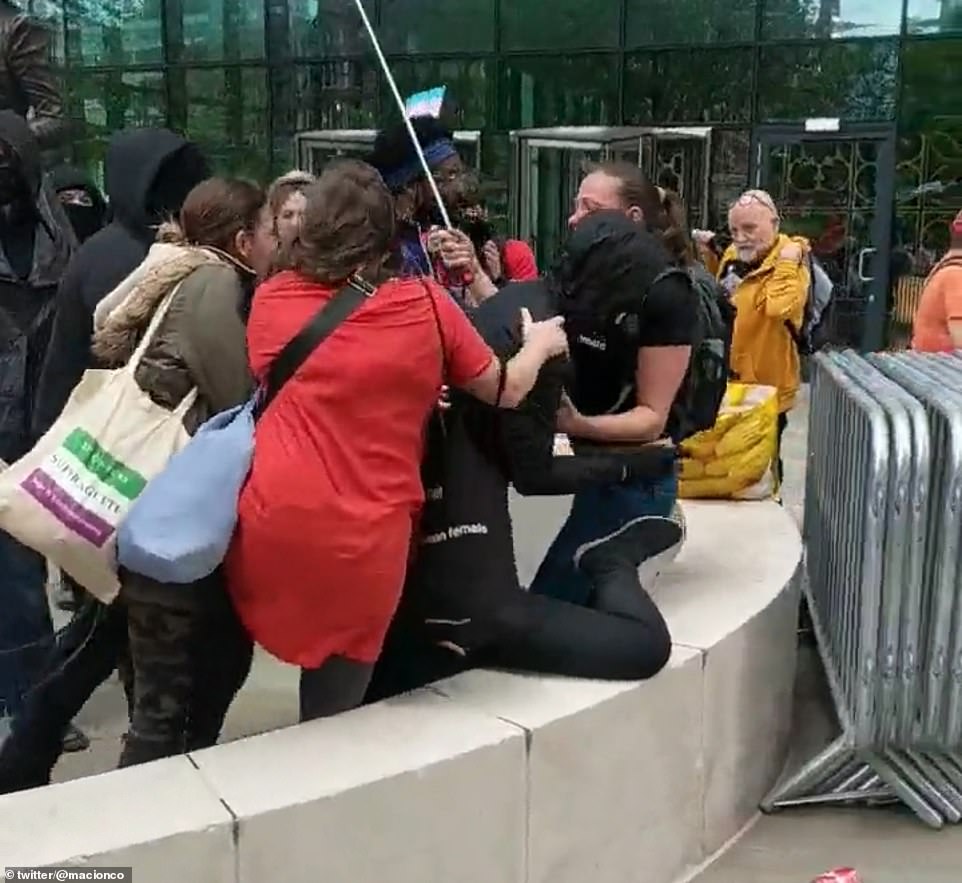 The two sets of activists tussled as they battled for position by the Emmeline Pankhurt statue on St Peter’s Square, Manchester 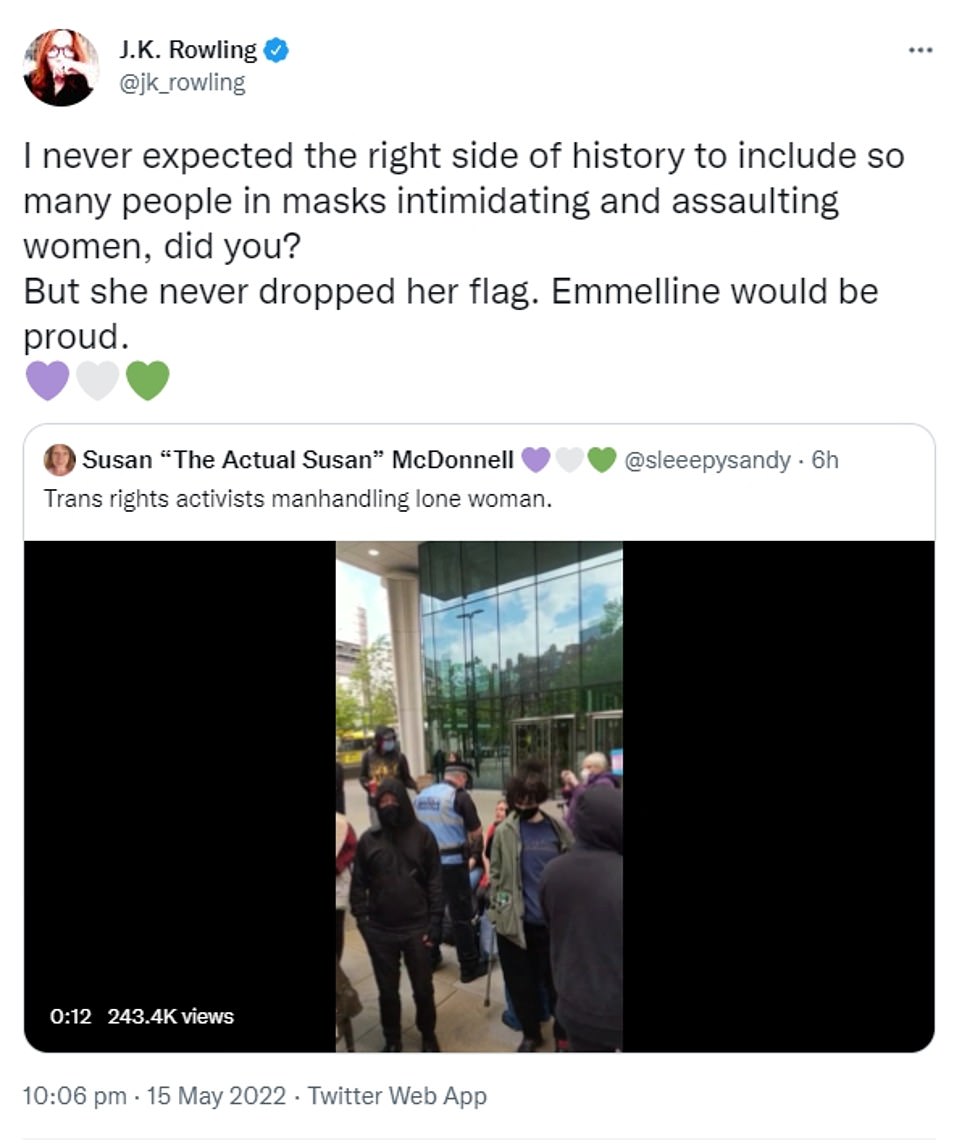 She later added: ‘I never expected the right side of history to include so many people in masks intimidating and assaulting women, did you? But she never dropped her flag. Emmeline would be proud’ 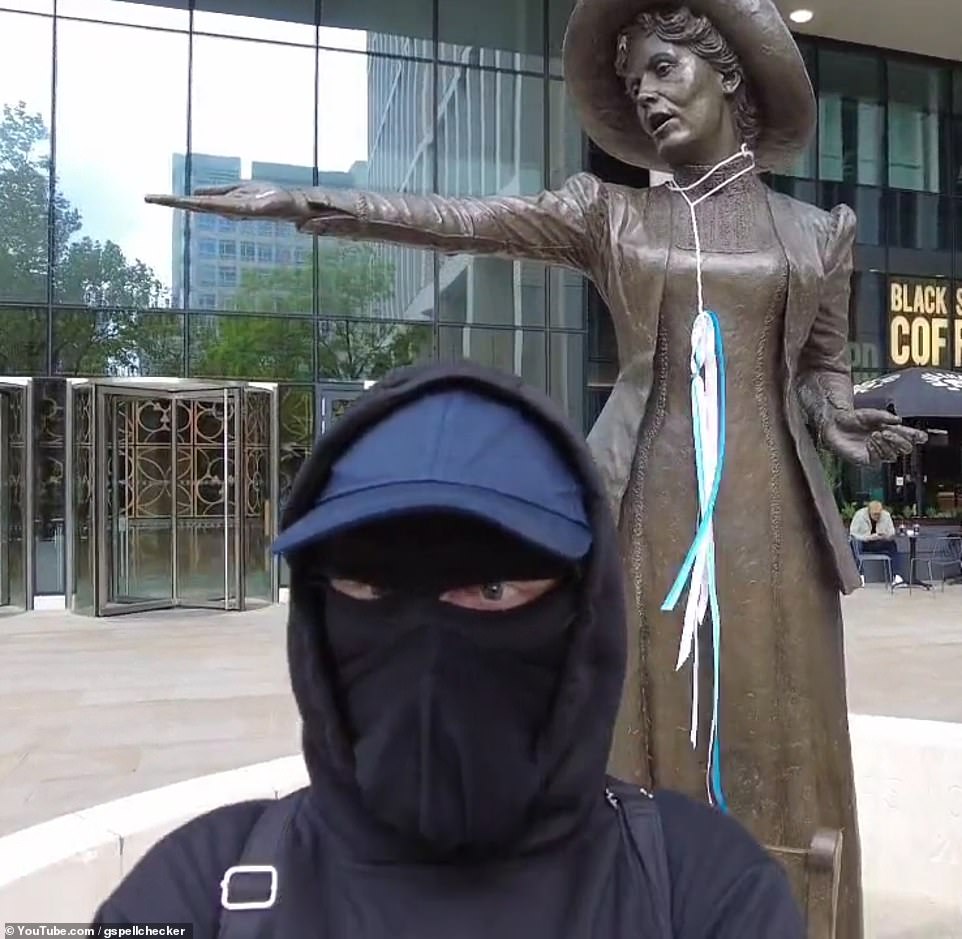 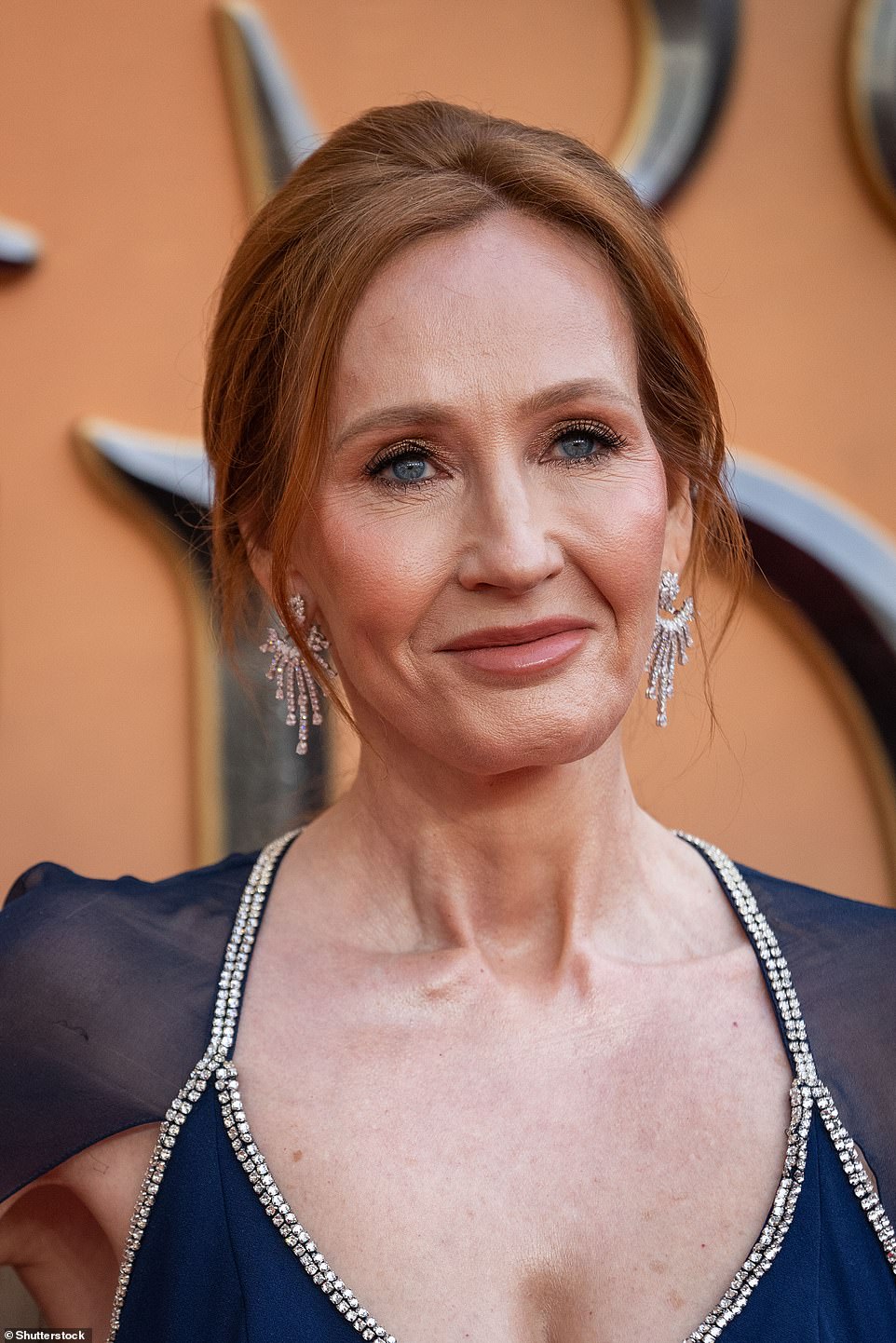 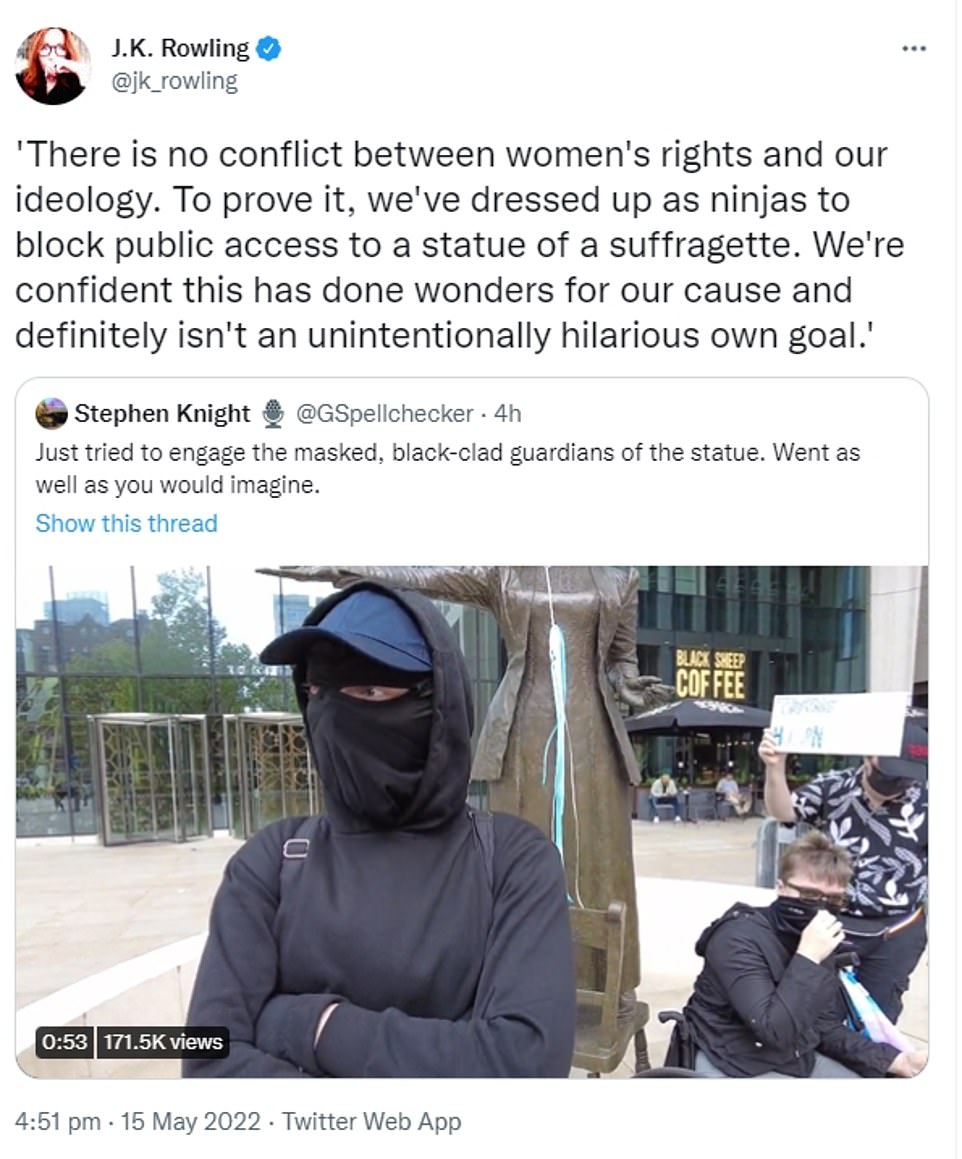 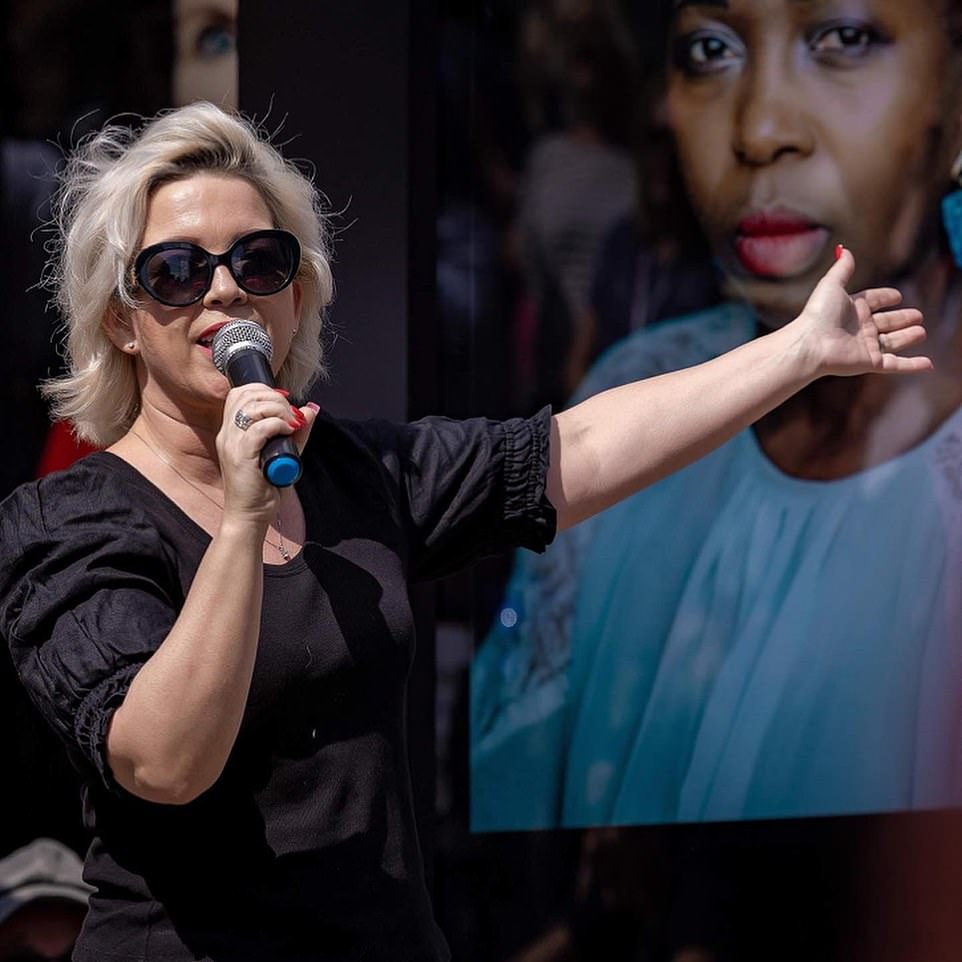 Kellie-Jay Keen (pictured at the event), the founder of campaign group Standing For Women, organised the event that aimed to reclaim a part of Manchester for women’s voices in the face of trans activism (Credit: Kellie-Jay Keen)

Kellie-Jay Keen, the founder of Standing For Women told the crowd the opposing demonstrators ‘can’t take our thoughts and won’t take our rights’.

Ms Keen told MailOnline: ‘In 2022 nothing could encapsulate the assault on women’s rights so perfectly as masked men preventing women from speaking next to the Pankhurst statue.

‘Women face an existential threat posed by transgender ideology. An ideology that places men into women’s rights, spaces and even our language.

‘Women have had enough and we will continue to speak up in the face of squealing, entitled, tantruming men.’

On Sunday she told her supporters the masked trans activists had ‘decided to interlope into our spaces, into our conversations and we’re saying no’.

The gender critical campaigners supported by Rowling say that although gender is a social construct and can be chosen, sex is a biological fact and cannot be changed.

However, they say many pro-trans activists have conflated the meaning of the two terms and as such trans people have claimed they are a different sex to the one they were born with. 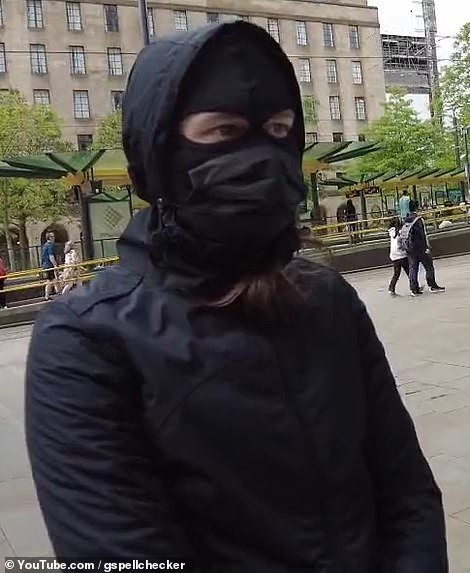 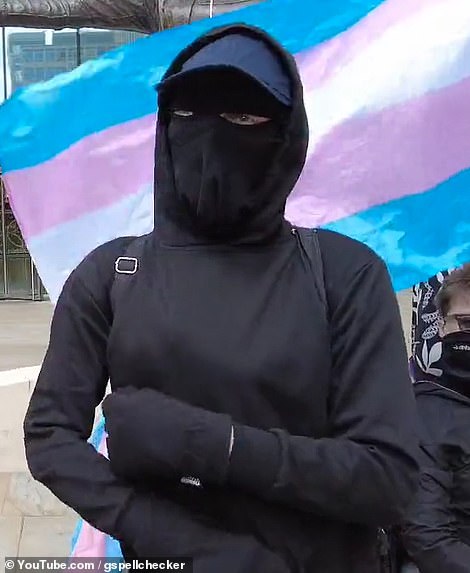 The pro-trans activists from the group Manchester Trans Rise Up dressed in masks to surround the statue of the suffragette leader, leading to a crowd of gender critical women moving to a different location 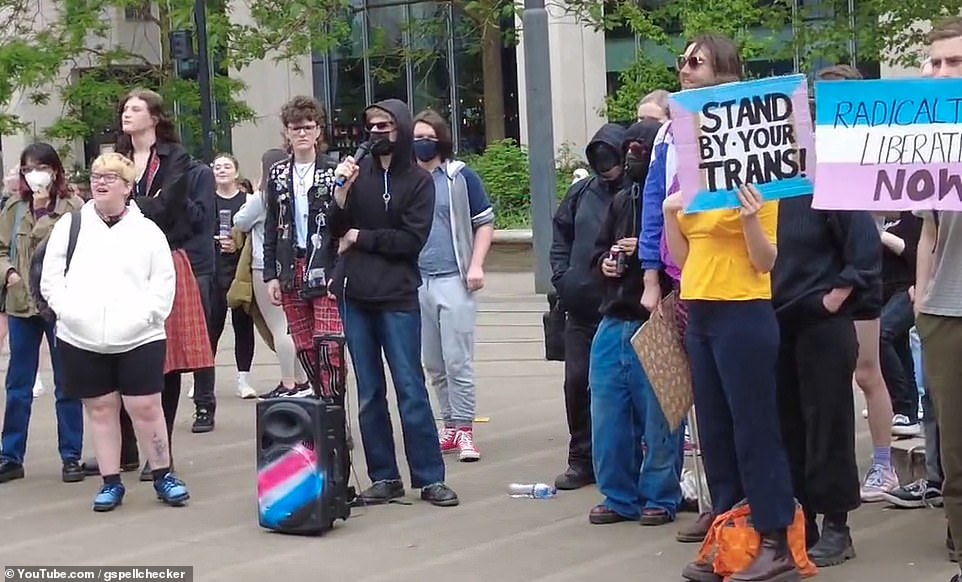 Manchester Trans Rise Up claimed the day as a victory on Twitter. The group said: ‘They didn’t get hold of the statue at any point. We claimed the space for for the entire time. Well done’

Ms Keen added: ‘They only want to convince our children that they also could join the cult of trans.

‘All we’re saying is can we not have men in our spaces? Can we not give our children mutilating drugs and hormones? Can we not encourage women to slice off their breasts?’

Group of KJK support made contact with the protest. pic.twitter.com/rt5jubcOo4 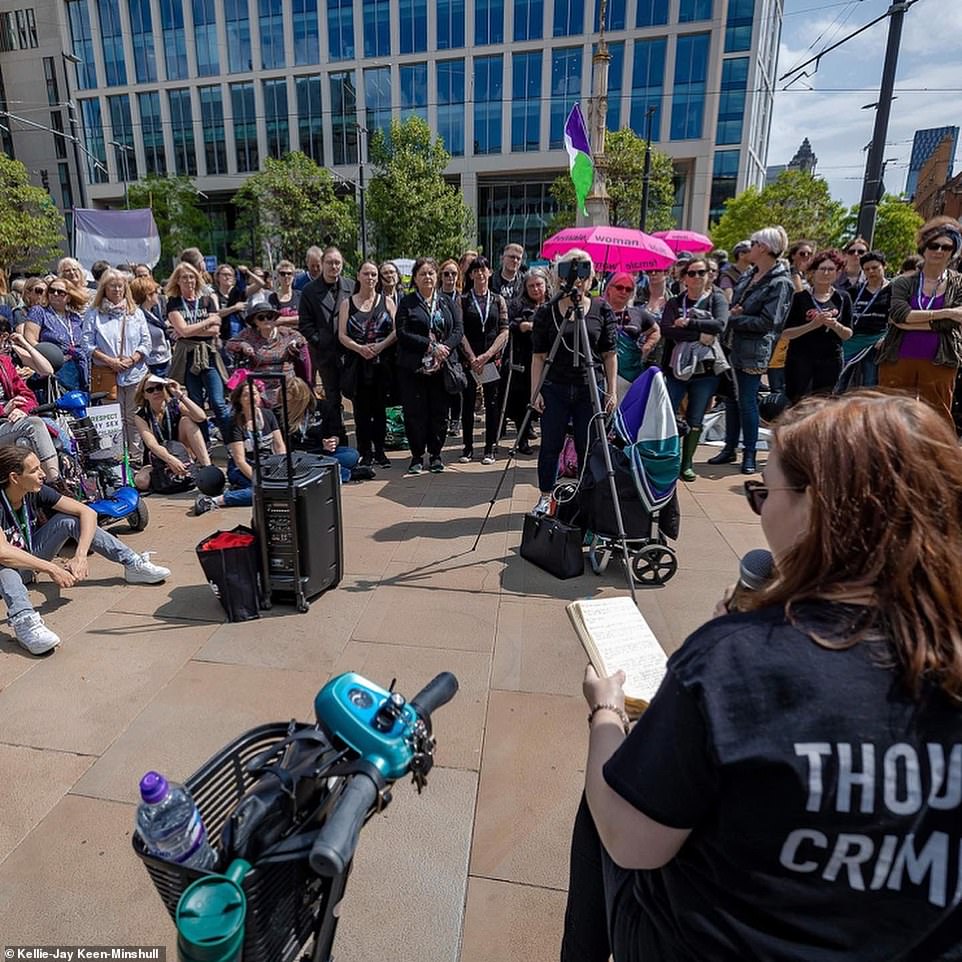 The women who were set to speak at the event went to voice their opinions elsewhere after the trans activists stood near the statue.

One of the trans activists was filmed tussling with a gender critical woman.

Manchester Trans Rise Up claimed the day as a victory on Twitter.

The group said: ‘They didn’t get hold of the statue at any point. We claimed the space for for the entire time. Well done.’

MailOnline has contacted Manchester Trans Rise Up for comment.

Who was Emmeline Pankhurst?

Emmeline Pankhurst, from Manchester, is best remembered for organising the suffragette movement and winning women the right to vote in the UK.

One of the best-known founding members of the Women’s Social and Political Union (WSPU), she oversaw the group from its non-violent beginnings but later advocated for direct action as a tactic for gaining the vote.

She was arrested several times and after being convicted of conspiracy to commit property damage, she used a common suffragist prison tactic – a hunger strike – to secure better conditions for her fellow suffragettes.

When the First World War began, Pankhurst refocused the WSPU’s efforts on supporting the war, causing a split in the group and within her own family. Her daughters Sylvia and Adela were pacifists. 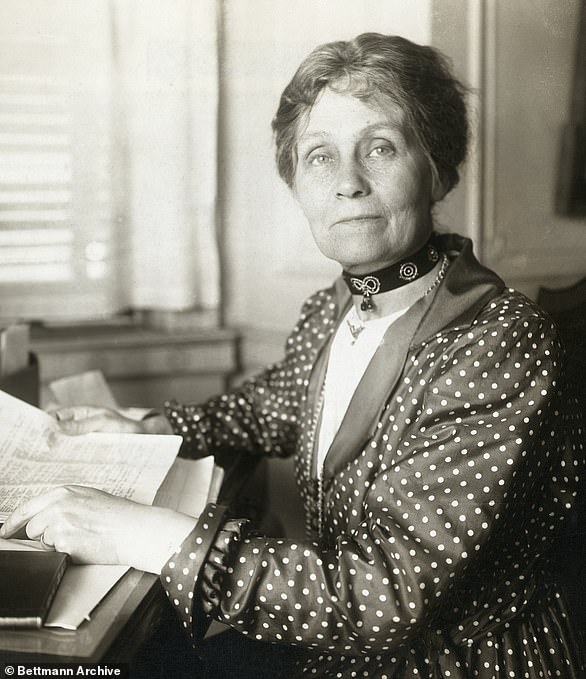 One of the best-known founding members of the Women’s Social and Political Union (WSPU), Emmeline Pankhurst oversaw the group from its non-violent beginnings but later advocated for direct action as a tactic for gaining the vote 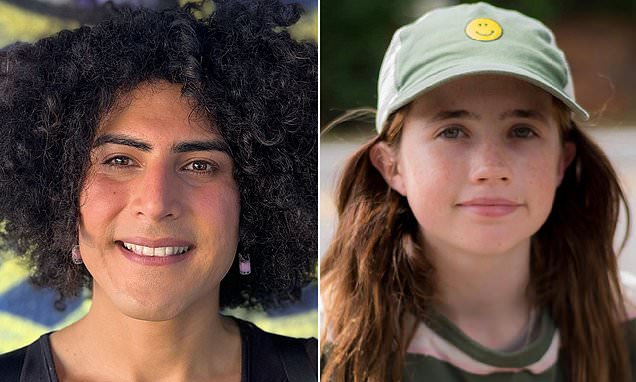 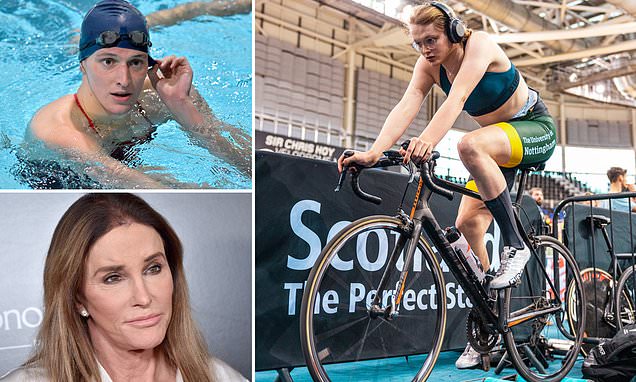 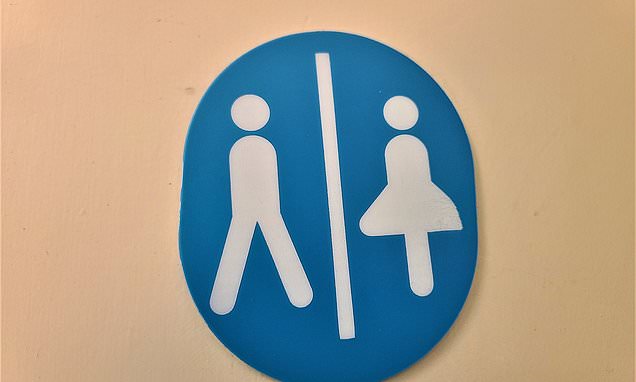 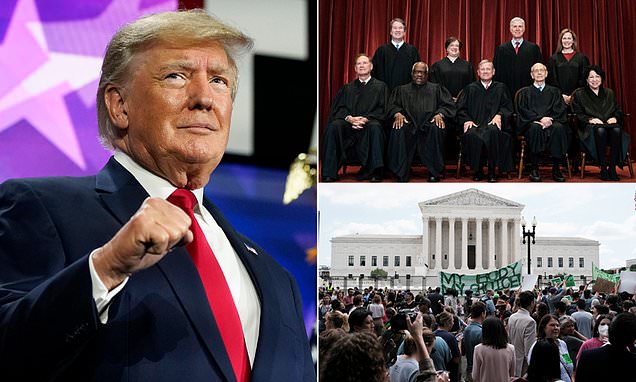 'This will work out for everybody': Trump praises SCOTUS decision on Roe V. Wade and says it gives states back their rights Former President Donald Trump said that the June 22 decision follows the constitution  Trum...