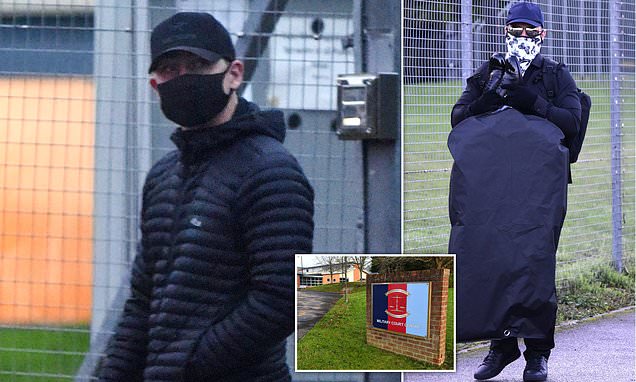 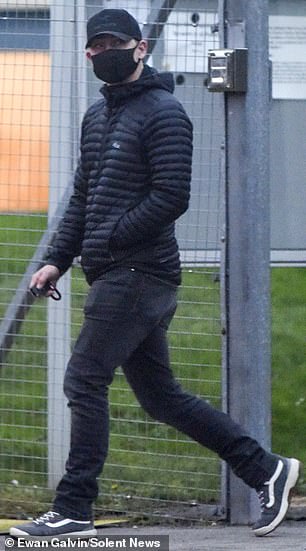 Able Seaman William Stewart, 26, took advantage of the woman after going on a night out in the North East with other sailors while their was undergoing maintenance

A judge has called for a ban on Royal Navy parties with ‘excessive drinking’ after jailing a sailor for raping a female colleague following a ‘naked mess’ at a Holiday Inn.

Able Seaman William Stewart, 26, took advantage of the woman after going on a night out in the North East with other sailors while their ship was undergoing maintenance.

The pair had been out drinking before returning to a Holiday Inn hotel to continue celebrations in a conference room, where several sailors took their tops off after someone shouted ‘naked mess’.

The court martial in Bulford Military Court, Wiltshire, was told that the female sailor, who would later become Stewart’s victim, had stripped down to her bra and showered herself and her half-naked male shipmates in prosecco.

She then went with three of the group – including AB Stewart – to another male sailor’s hotel room, where she later awoke to find him sexually assaulting her.

She awoke to find AB Stewart, an engineering technician she hardly knew, ‘fondling’ her breasts and touching her before he moved to the other side of the bed and sexually assaulted a male sailor, who was also asleep, before returning to rape her.

AB Stewart was found guilty by a board of military personnel of one count of rape, one of assault by penetration and one of causing a person to engage in sexual activity.

Jailing the disgraced sailor for eight and a half years, Judge Advocate Robert Hill warned against the volume of similar incidents occurring in the armed forces, suggesting a ‘ban’ be considered to deter ‘excessive drinking’.

In the last year there have been a series of other sexually related cases involving the Royal Navy heard at Bulford.

In October, Leading Seaman Sam Avery was jailed for five years after raping a sleeping drunken colleague after she agreed to let him sleep in her bed. 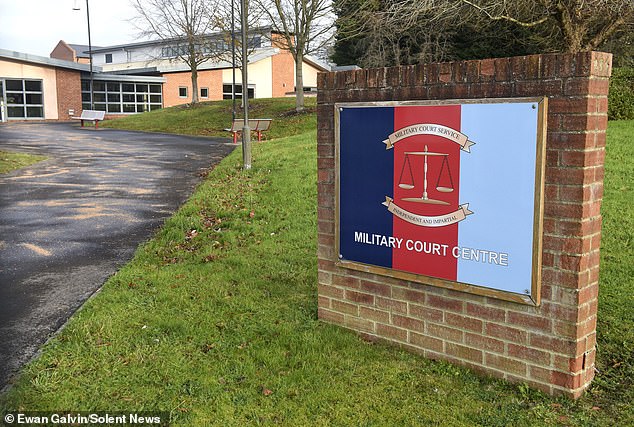 The court martial in Bulford Military Court, Wiltshire, was told that the female sailor, who would later become Stewart’s victim, had stripped down to her bra and showered herself and her half-naked male shipmates in prosecco

In February AB Sean Bramwell lost his job after he sexually assaulted a junior colleague after a night out in Tokyo just hours after the Prince of Wales had visited his ship.

Sentencing Stewart, Judge Hill said: ‘We wish to make this general observation: There seems to be a pattern of behaviour of drinking to excess in each other’s company, ending up in each other’s cabins and choosing to crash in the beds they are in. 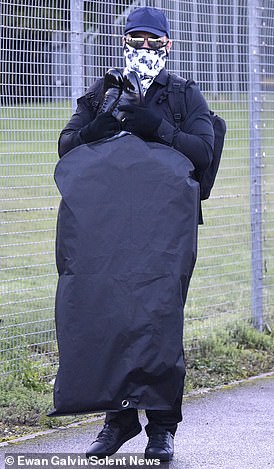 A Royal Navy sailor was jailed for five years in October after raping a female colleague as she slept.

The female sailor woke to find Leading Seaman Sam Avery having sex with her, his hands on her waist and her pants pulled down to her knees.

The woman, who cannot be named, had turned down two of his previous advances before falling asleep after agreeing to let LS Avery stay the night in her bed.

She said the attack ‘came out of nowhere’ as there was not even a friendly hug or kiss between the two and the only sexual contact between them was the advances she had rejected.

LS Avery, who worked refuelling stealth fighters on aircraft carrier HMS Prince of Wales, denied a single charge of rape and claimed to have no memory of having sex with her. He said, if anything did happen, it must have been consensual.

However he was convicted at Bulford Military Court, Wiltshire, in October, and jailed for five years. LS Avery was also dismissed from Her Majesty’s Services with disgrace.

Jailing him, Judge Robert Hill told Avery he had betrayed the trust of the woman who had agreed to let him sleep in her room.

Judge Hill said: ‘You and your victim had been contacting for some time on a social network.

‘You had not met until the night of this offence. You were both out in Portsmouth, and you went back to [her base] with her.

‘There came a time when both you and she went to bed. She took you on trust.. There had been nothing sexual leading up to this.

‘She firmly rebuffed you twice – there was no doubt she was not up for sex.

‘She was drunk and asleep when you started to have sex with her. She trusted you and you knew you were being trusted.’

‘This is the second case (we have dealt with) in a matter of weeks of the behavioural trend I have described. It would be appropriate to consider whether any ban should be strictly enforced.’

AB Stewart stood still and showed no emotion as his sentence was read out, whilst family and friends wept at the back of the court.

The family of AB Stewart released a statement saying: ‘The family are shocked and incredulous at the outcome of this Court Martial and intend to pursue every route to clear their son’s name.

‘There are far too many inconsistencies… This case needs to be thoroughly re-investigated. This is not over.’

Prosecuting, Wing Commander Michael Saunders had told the court: ‘AB Stewart had recently joined the ship. They all had a significant amount to drink. (The female victim) was given a bottle of prosecco, as it was her birthday.

‘(Videos from the conference room) show (her) pouring the prosecco over herself and onto some males with their tops off on the floor. One of them was AB Stewart.’

‘We were all having drinks and everybody was having a good time. (Later on) we were all in the conference room, and we ordered pizza. ”Naked mess” was shouted – it was just tops off… we all had a bit of the prosecco and I got a bit wet (from) the alcohol.

‘I remember people laying on the floor when I had the prosecco… I was stood up with the bottle.’

The woman – who cannot be named for legal reasons – told the court four of the sailors went back to one of their rooms to carry on the party.

‘I asked the lad whose room it was if I could change into dry clothes,’ she said. ‘I changed into boxers and a top and continued drinking.

‘I started getting sleepy and I just crashed. I fell asleep.’

But the ‘scared and confused’ woman later awoke to AB Stewart, an engineering technician she hardly knew, ‘fondling’ her breasts and touching her.

She said AB Stewart, who grew up in Plymouth on the south coast of Devon, then moved to the other side of the bed and sexually assaulted a male sailor who was also asleep before returning to rape her.

‘He basically did what he wanted and I hoped it would be over,’ she said. ‘I remember praying the lad next to me would wake up. It felt like a lifetime.’

AB Stewart had told the court martial all sexual activity with the sailors was consensual and instigated by them.

He also said the female sailor had been ‘twerking’ at him in the hotel room shortly before they got into bed together.

Reading her victim impact statement to the court, the victim said she still had ‘flashbacks’ of the event and that it had brought her to ‘the point of collapse both emotionally and physically’.

In July, 31-year-old AB Jodie McSkimmings was dismissed from the Navy for drunkenly sexually assaulting three male sailors during an expedition in Norway.

AB Mitieli Vakalaca was jailed for four years in August after he tried to rape a female colleague and refused to let her check if he was wearing a condom, having been drinking heavily that evening.

The same month AB Calvin Denver, a sailor on a missile-armed Trident submarine, was allowed to keep his job after he tried to force a female sailor to give him oral sex after drinking in the nuclear vessel.