Kangaroo caught attacking a cyclist after being rescued earlier 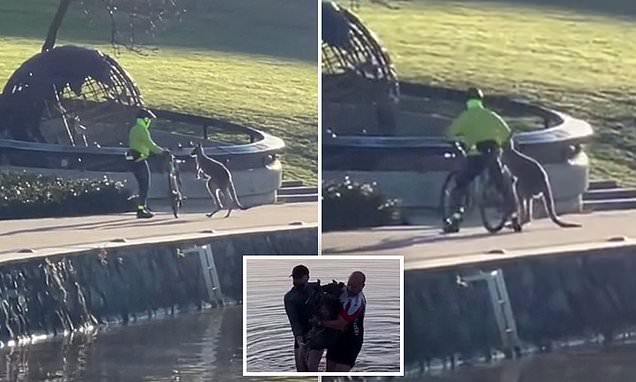 Was he roo-ly grateful? Twist as kangaroo that was saved from a freezing lake by two strangers is caught ATTACKING a cyclist after the miraculous rescue

A kangaroo that was rescued from certain death in freezing cold lake waters by two kind gentleman walking past has shown its true colours in new footage where it can be seen attacking a cyclist on his morning ride.

The marsupial had earlier that morning been pulled to safety by two men willing to wade into the chilly waters of the lake at dawn in what was deemed a heartwarming rescue by witnesses.

But shortly after its miracle escape, the kangaroo was caught staring down a cyclist in a hi-visibility jacket as he tried to cycle along the promenade by the lake.

The roo began to hit the bicycle, which caused the cyclist to step off the bike and use it as a shield against the animal.

As the cyclist shielded himself with his bike, the kangaroo continued to circle and throw punches.

While the cyclist appeared to remain calm, he also attempted to redirect the kangaroo by pointing his hand to the grass in the opposite direction.

But the feisty roo didn’t have any plans to stop its attack as the video ended.

Many users of the social media platform were quick to point out the kangaroo rescue at the same lake earlier in the morning.

One user wrote: ‘WAIT WAIT WAIT isn’t that the same kangaroo that was going in the water and two guys went in to rescue him?’

Another wrote: ‘Is that the same one that needed help getting out of the water earlier?’

A third said: ‘Is this the prequel or the sequel?’ 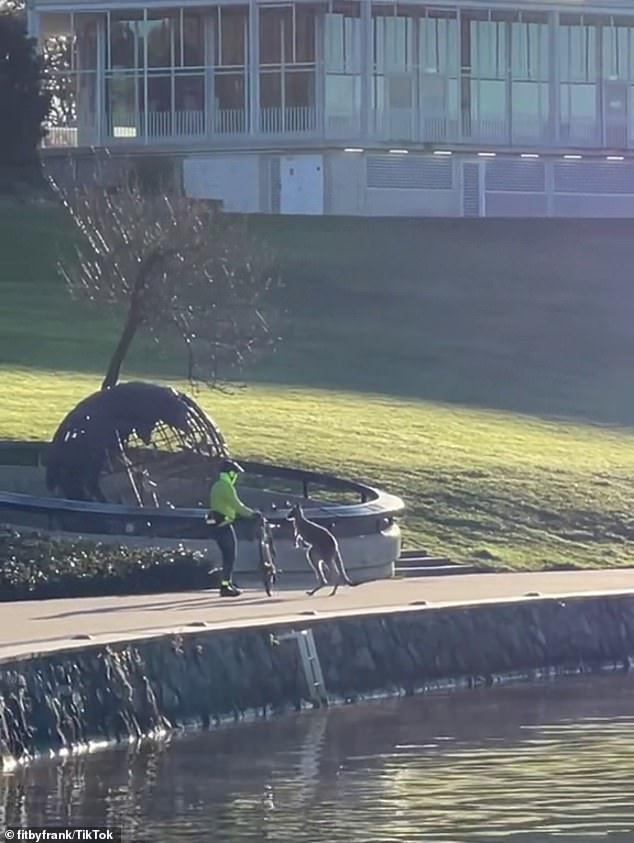 On Tuesday morning, David Boyd had seen the kangaroo stuck in the freezing waters of Lake Burley Griffin and posted footage to Facebook of two men who jumped in to save the frightened and exhausted roo.

The video showed two men slowly move their way towards the frightened roo in the water with their arms out, calling for it to come closer.

The little roo could be seen shivering while looking at both men who were carefully approaching.

As soon as the man on the left of the video reached out to grab the kangaroo, it began to throw its arms around in fear.


Luckily, the two men were able to grab a hold of the worried roo and lift it to safety onto the promenade, where a third man was waiting to assist.

The three men managed to calm the kangaroo as it extended its arm to one of them in what Mr Boyd thought was a way of showing appreciation.

‘Aw, he’s thanking ya,’ Mr Boyd can be heard saying behind the camera.

Mr Boyd wrote on the social media platform that the kangaroo was in a bit of shock, and it took about 30 minutes for the animal to perk up again. 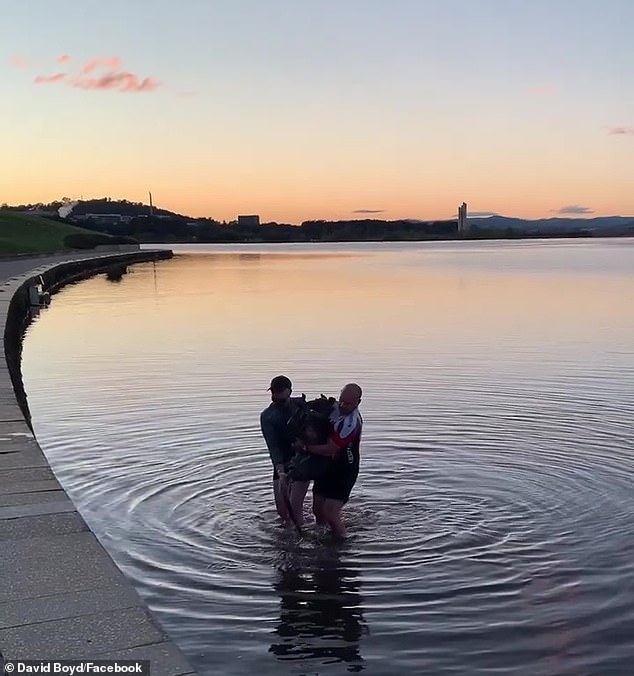