The former glamour model, 43, who was last seen in public yesterday during an interview on Good Morning Britain, was said to be in a ‘bad way’ when police arrived and allegedly arrested her.

A source told The Sun: ‘Katie rolled her car and was in a bad way when police arrived. She’s in hospital now and everyone is desperately worried about her and why she was driving.’

Asked by Susanna Reid how Harvey, 19, was doing, she replied: ‘Harvey’s in Cheltenham now, he keeps ringing me saying, ‘Mummy I miss you, I need your kisses and cuddles’, so it is quite hard. 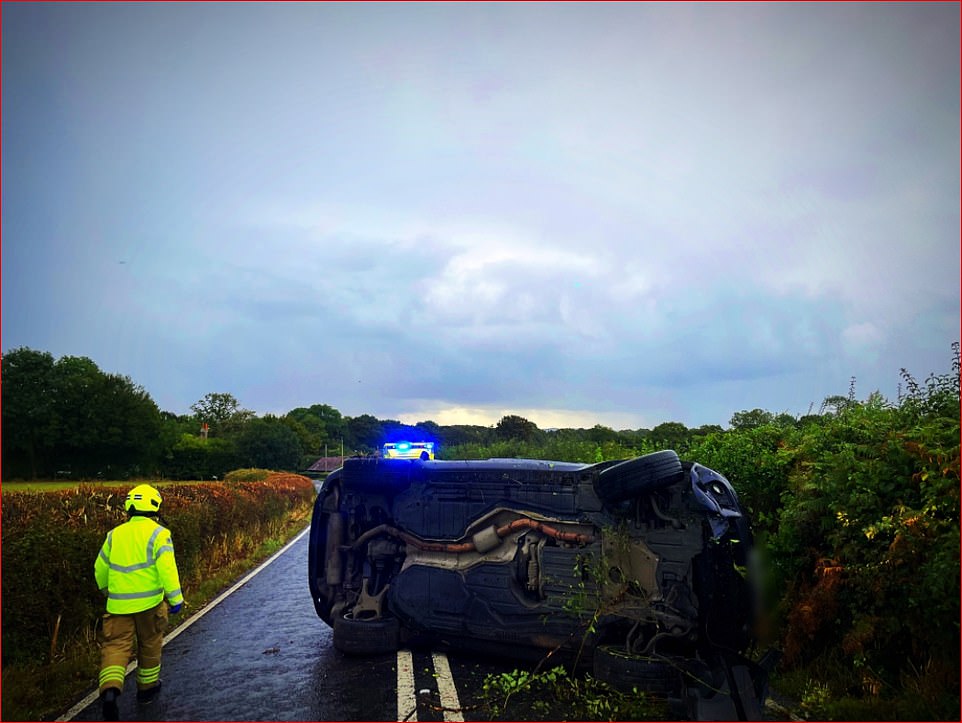 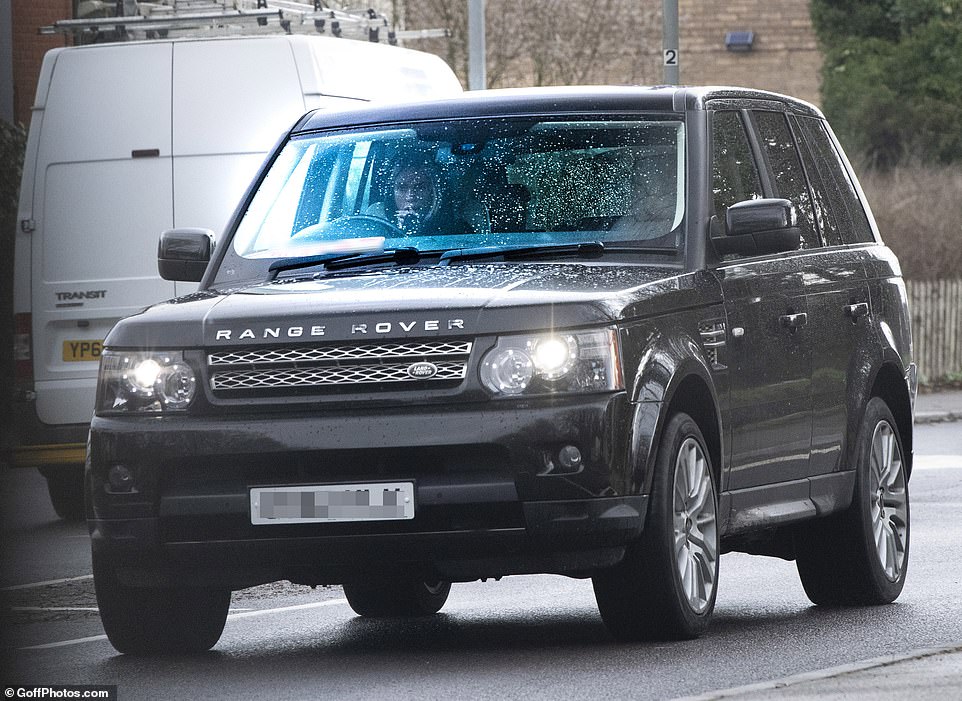 Family: Katie Price, 43, and her younger sister Sophie, 32, made their TV debut together on Monday’s episode of Good Morning Britain

October 3, 2003 Escaped a speeding charge on a technicality after cops failed to arrest her within 12 weeks. Her Range Rover was allegedly clocked at 70mph in a 40mph zone.

June 5, 2008 Given three penalty points, fined £200 and ordered to pay £80 costs at Feltham magistrates’ court for talking on her mobile phone while driving on April 18.

January 7, 2009 Let off on a legal technicality by Brighton magistrates after allegedly breaking a 30mph limit and not providing the identity of the driver to police.

July 7, 2010 Convicted in her absence by Crawley magistrates after cameras caught her speeding at 99 mph on September 16, 2009. Her lawyer argued she was only speeding because she was being hounded by the paparazzi, but police said there were no other speeding vehicles around. She was fined £250, ordered to pay £500 prosecution costs and given four points on her licence.

September 28, 2010 Convicted at Mid-Sussex Magistrates’ Court for failing to be in proper control of her 7.5-ton lurid pink horsebox after veering into another lane in Sussex on February 19. She was fined £1,000, ordered to pay £650 court costs and a £15 victim surcharge and given three points on her licence, taking her tally to 10.

December 1, 2010 Banned from driving ban for six months after she was caught on speed camera travelling at 83mph in a 70mph zone on the A23 in Pyecombe, West Sussex on 10 December 2009. Ms Price, who did not attend the hearing, pleaded guilty to the charge. In her absence, she was fined £1,000 and given three penalty points on her license (taking her total at that time to 13 points). This took her over the 12-point limit and brought an automatic six-month driving ban and so she was disqualified from driving for six months.

August 31, 2012 Barred from driving on the roads for 12 months, after failing to respond to two speeding tickets. She had been caught speeding in London on September 5 and September 6 2011. The glamour model argued that all of her post was dealt with by her mother and she had never seen the prosecution warnings. Ms Price, who already had six points on her licence at the time, was given six more and banned for 12 months. She was also fined £400.

February 16, 2018 Banned from driving for six months after doing 60mph on the 50mph A24. She already had points on her license. Following the incident in Dial Post, West Sussex in 2017, Ms Price failed to tell police when the speeding ticket arrived and was charged with failing to provide details about the person driving. She failed to show up at magistrates’ court and was given a six-month ban and a £750 fine.

July 28, 2018 In July she was was questioned by police after photographs emerged of her getting behind the wheel of her car while still banned from the road. Pictures revealed Ms Price driving her grey Ford Fiesta home from Gatwick with her youngest kids Jett, aged four, and Bunny, aged three. She handed herself into police and took to Instagram to insist that she thought the ban was over – but as soon as she realised it wasn’t, confessed her wrongdoing to authorities to avoid a ‘guilty conscience.’ The former glamour model said at the time: ‘After driving to Harvey’s Hospital appointment I have NOW found out that I don’t get my licence back until 8th August.’

September 26, 2018 Crashed her £63,000 Ranger Rover on September 26, while allegedly on her mobile phone. The crash was reported to the police. Marketing executive Katie Pugh, 23, told MailOnline that the troubled star rear-ended her Mercedes as they were stuck in traffic on the A3 in Roehampton, Surrey. Pugh said she looked up into her rear-view mirror and noticed Ms Price appearing to be looking at her phone moments before the collision at around 5.30PM on September 26.

October 10, 2018 Arrested on suspicion of drink-driving in the earlier hours of the morning on October 10, after being found by police in her garish pink Range Rover in Woolwich, East London. Ms Price had allegedly been partying with ex-boyfriend Kris Boyson helping him celebrate his 30th birthday when her car ended up hitting a parked car. She took a roadside breath test and was taken to Plumstead Police station where she was released after a night in the cells. Ms Price was then photographed driving her car without wearing her seatbelt, just 36 hours after her drink driving arrest – an infraction that carries a £100 fine.

December 2018 Charged by postal requisition over her drink-driving charge and is now due to appear at Bromley Magistrates’ Court on Monday, 7 January.

January 2019 Caught driving while disqualified, and was given another three months.

February 2019 Served a further three month ban after being convicted of drink-driving in October 2018.

Autumn 2019 Issued with her sixth ban – a two-year disqualification –  which she appealed. It was reduced to 18 months.

March 2021 Gets behind the wheel of boyfriend Carl Wood’s Range Rover weeks before her 18-month ban is lifted. Questioned by police over the matter

September 28: Ms Price is allegedly hospitalised and arrested for drink-driving after being involved in an early hours crash.

Sussex Police said today: ‘Police responded to reports of a single-vehicle collision on the B2135 near Partridge Green around 6.20am on Tuesday (September 28).

In 2018, she was banned for another six months, totting up 12 penalty points on her driver’s license.

At the time, she was receiving treatment at The Priory and meant to be abstaining from alcohol, but it has since been claimed that she went on a five day bender prior to her drink-drive arrest.

Taking to Instagram, the former glamour model admitted that she thought the ban was done – but as soon as she realised it wasn’t confessed her wrongdoing to authorities to avoid a ‘guilty conscience.’

She said at the time: ‘Been on such an emotional rollercoaster the last 6 months and my head has been all over the place, so much so, that I thought my driving ban was up.

‘After driving to [son] Harvey’s hospital appointment I have NOW found out that I don’t get my licence back until 8th August.

The reality star received a £750 fine as well as £200 in costs and a £75 surcharge following her conviction, according to reports. 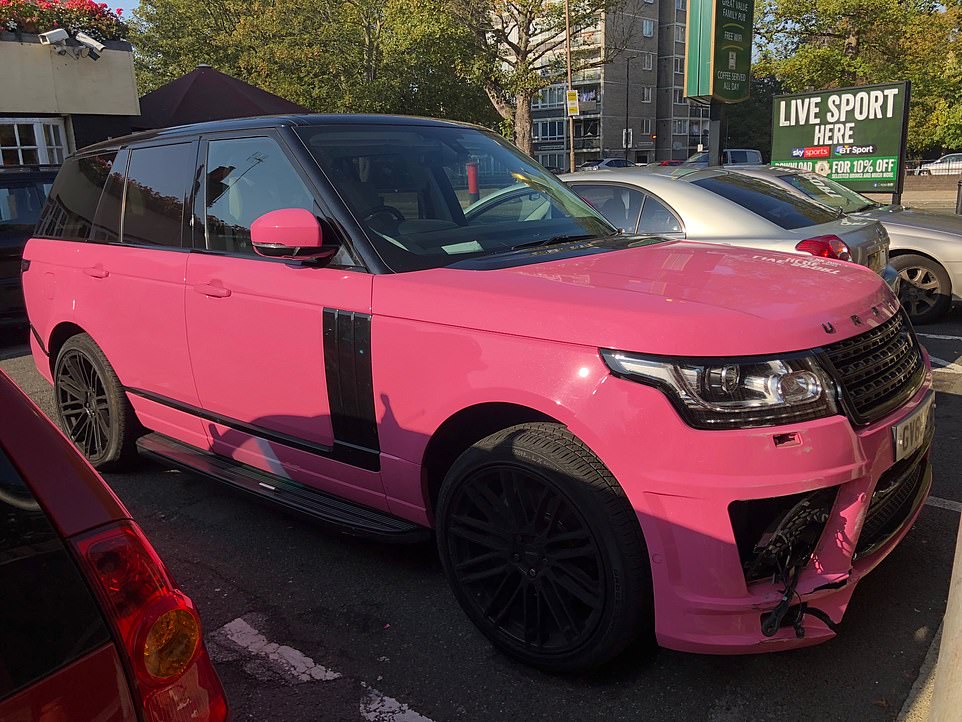 Ms Price was banned after her famous pink Range Rover (pictured) was involved in a crash in November 2018, after which Ms Price refused to tell police who had actually been behind the wheel