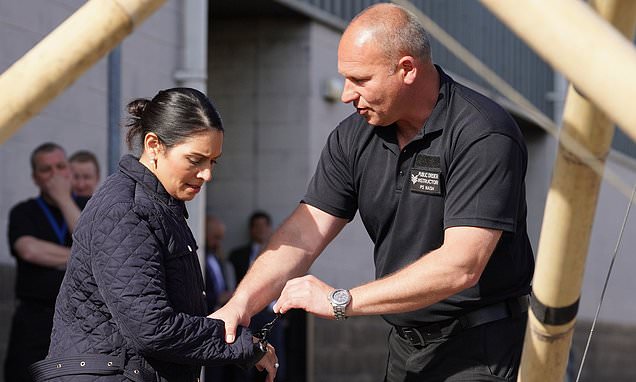 Crackdown on green zealots’ chaos: Eco-warriors will be BANNED from chaining themselves to buildings and blocking roads under tough new police powers to quash protests

Police will be given powers to stop eco-protesters blocking roads and inflicting fuel shortages on motorists.

A law to tackle disruptive action by groups such as Extinction Rebellion will be announced in the Queen’s Speech today.

Ministers have made the Public Order Bill a priority and it will start its journey through the Commons tomorrow.

The Government had attempted to bring in the measures in January, but they were blocked by Labour and others in the House of Lords. 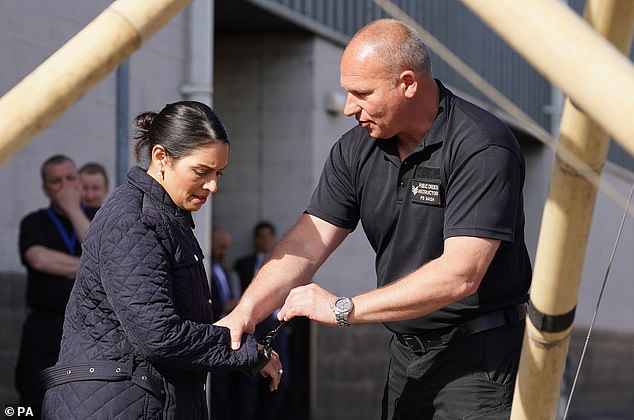 A law to tackle disruptive action by groups such as Extinction Rebellion will be announced in the Queen’s Speech today. Priti Patel visiting the Metropolitan Police specialist training centre in Gravesend, Kent 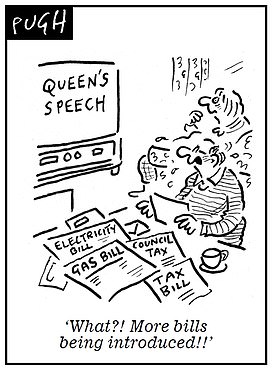 A criminal offence of ‘locking on’ will be created to prevent activists chaining themselves to buildings, vehicles and other protesters.

It will carry a maximum penalty of six months and an unlimited fine.

Stop and search powers will allow police to detain campaigners carrying bike locks and other equipment designed to make themselves difficult to remove.

A new offence will also be introduced to specifically ban the obstruction of key national infrastructure such as airports, railways and newspaper printing presses, which will be punishable by up to 12 months in prison and an unlimited fine.

It will also be illegal to obstruct major transport works, including disrupting the construction or maintenance of projects such as HS2.

Groups such as Extinction Rebellion, Insulate Britain and Just Stop Oil have used guerrilla tactics to wreak havoc in recent years – stopping people getting to work and costing taxpayers millions because of the mammoth police operations.

During the tour, public order instructor Sergeant Adam Nash showed the Home Secretary some of the tactics and equipment demonstrators use to maximise disarray.

Last night Miss Patel said: ‘The law-abiding, responsible majority have had enough of antisocial, disruptive protests carried out by a self-indulgent minority who seem to revel in causing mayhem and misery for the rest of us.

‘The Public Order Bill will give the police the powers they need to clamp down on this outrageous behaviour and ensure the British public can go about their lives without disruption.’

The legislation will be one of 38 Bills to be announced in the Queen’s Speech. Other measures will include a Schools Bill making it compulsory for teachers to take registers of absent children so the authorities can identify who is not receiving a full-time education. 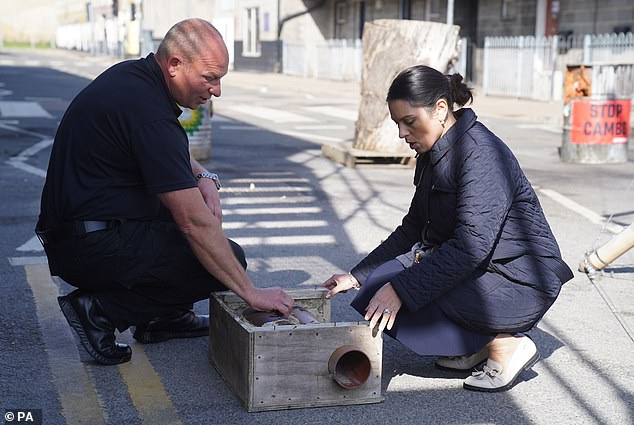 A Procurement Bill will give small and medium-sized businesses a better opportunity to compete for Government contracts. Reform of the Official Secrets Act is planned to make it easier to prosecute and deport foreign agents.

No-fault evictions will be stopped under a Renters’ Reform Bill that will also create a national landlord register. And a Gene-editing Bill will let scientists develop techniques to genetically alter livestock, making them resistant to diseases.

Boris Johnson is hoping to use the occasion to show he is focused on concerns over issues such as the rising cost of living following a bruising set of local election results.

The Prime Minister said last night: ‘This Queen’s Speech will get our country back on track, and I will strive – and this Government will strive – night and day to deliver it. 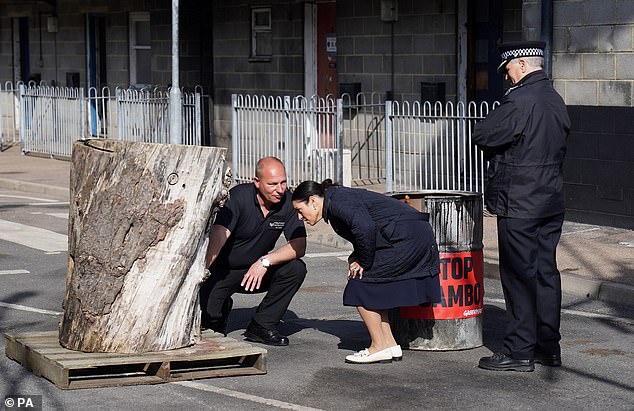 During the Kent tour, public order instructor Sergeant Adam Nash showed the Home Secretary some of the tactics and equipment demonstrators use to maximise disarray. Pictured, an item used by protesters

‘Because in spite of everything we have been through, we are going to ensure that over the two years we have left in this parliament, we spend every second uniting and levelling up this country, exactly as we said we would.’

In an address to MPs this afternoon, Mr Johnson will argue the best way to address the cost of living crisis is to grow the economy.

He will say: ‘We will get the country through the aftershocks of Covid, just as we got through Covid, with every ounce of ingenuity and compassion and hard work.

‘By urgently pressing on with our mission to create the high-wage, high-skilled jobs that will drive economic growth across our whole United Kingdom.

‘That is the long-term, sustainable solution to ease the burden on families and businesses.’ 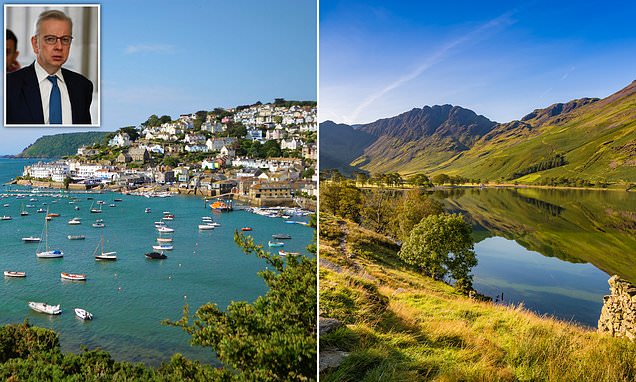 Second-home owners face Airbnb BAN as Michael Gove plans crackdown on holiday lettings to protect tenants living in tourist hotspotsSecond home owners could be banned from letting them out on hotel websites  Michael ... 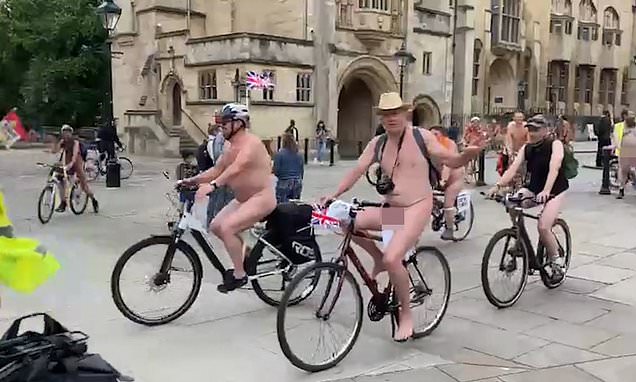 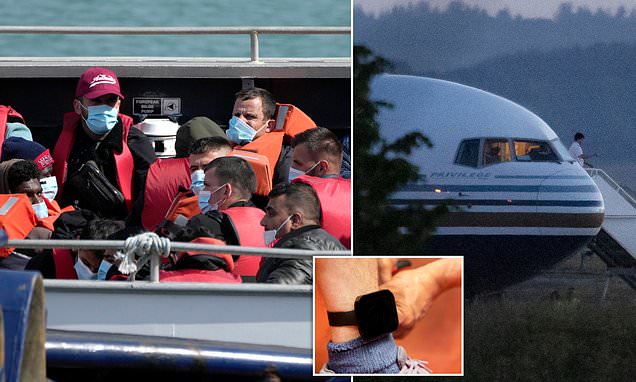 Channel migrants to be tagged and prosecuted in Home Office crackdown

Channel migrants to be tagged and prosecuted if they don't comply with new Home Office crackdownAsylum seekers who cross the English Channel in boats face electronic tagging  Home Office will track refugees who come ...