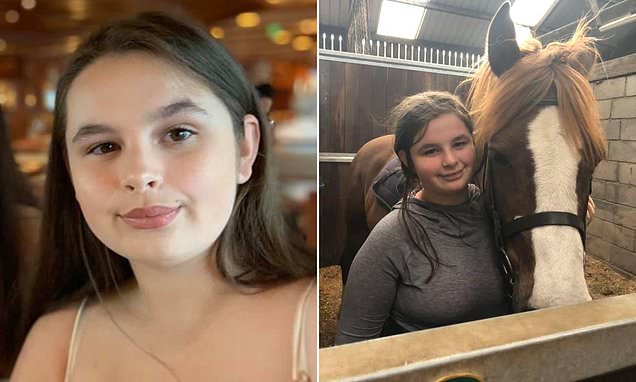 Fourteen-year-old leukaemia sufferer ‘would still be here today if she had been looked at properly’ at Alder Hey children’s hospital, family tell inquest after she died from a brain haemorrhage leading to ‘significant’ lessons being learned by staff

A mother said her teenage girl would still be alive if she wasn’t ‘drastically let down’ by professionals.

An inquest today heard that ‘significant’ lessons have been learnt following the tragic death of a Warrington teenager.

Katie Wilkins died after a short battle with a rare form of leukaemia at the age of 14 on July 31, 2020 as the inquest into her death began at the Gerard Majella Courthouse earlier this week.

Katie was transferred to Alder Hey from Warrington Hospital following weeks of vaginal pains and deterioration – which eventually led to a leukaemia diagnosis.

While at Alder Hey, she was sent to the High dependency unit to ensure she had around the clock care and on July 29, an operation was planned.

But her health deteriorated ‘rapidly’ after being given morphine for a headache.

When it was discovered she suffered a bleed on the brain, she was rushed to theatre – but the following day it was found she had ‘no brain activity’ and a decision was made to turn off the machines ‘keeping her alive’.

On Monday her mother Jeanette Whitfield, from Warrington, said: ‘I lost a part of my heart that day, my best friend and her sister’s best friend. You put your trust and everything in the experts so you don’t expect to learn how drastically she was let down. She should still be here with me.’ 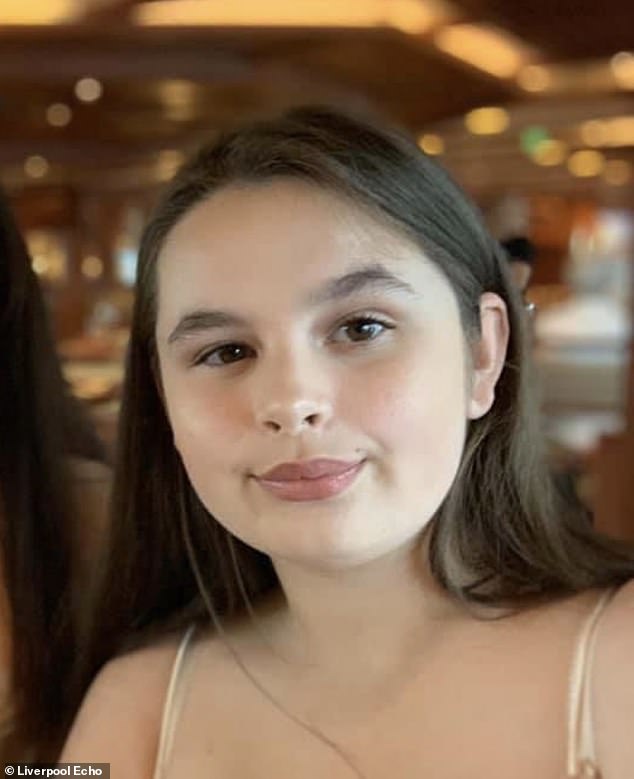 Katie Wilkins (pictured), who had leukaemia died at the age of 14, after being ‘drastically let down’ by professionals according to her family 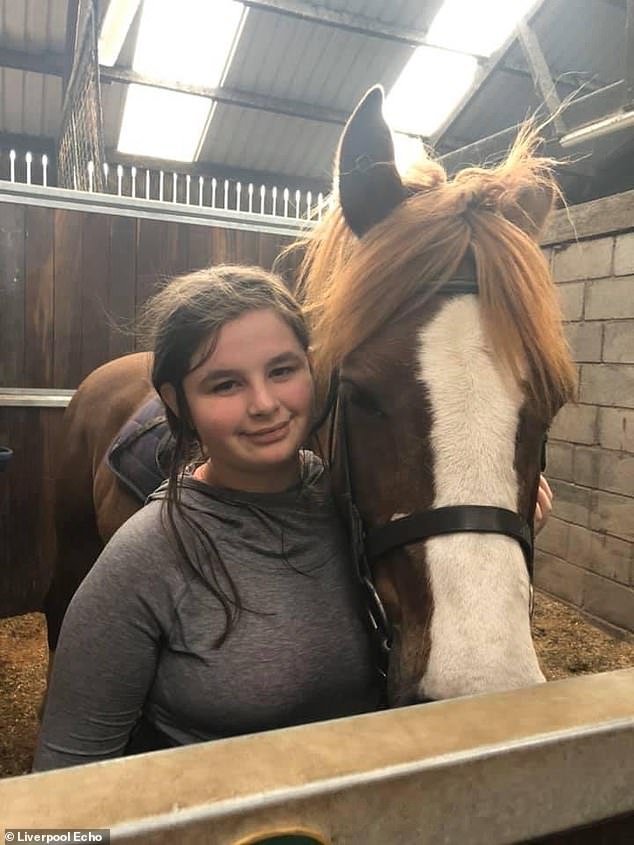 Katie’s condition deteriorated after being given morphine for a headache, it was discovered she hadn’t received a clotting treatment that she was meant to

Dr Lisa Howell, consultant paediatric oncologist at Alder Hey who worked on a cross cover team with haematologists, said when the teenager was handed over to her care on July 28, she ‘wasn’t desperately worried.’

The inquest on Tuesday heard how due to covid there was a ‘disruptive working pattern’ and a ‘lack of junior doctors’.

Dr Howell told how the handover was taken over teams and upon taking over on July 28, she was not then aware of Katie’s management plan that was originally in place.

On the morning of July 29, after being ‘bombarded with issues’, the doctor eventually went to see Katie and was ‘reassured’ to see her ‘chatty and joking’.

Despite complaining of a headache, which has been suggested is a ‘red flag’, this was ‘not a concern’ as it was not ‘dramatic and sudden’.

She said: ‘That’s not the picture I was seeing at the time. She had a bit of a headache. It clearly changed very significantly not very long after I returned to the ward.’

She added: ‘If it had been more significant I wouldn’t have left the room.’ 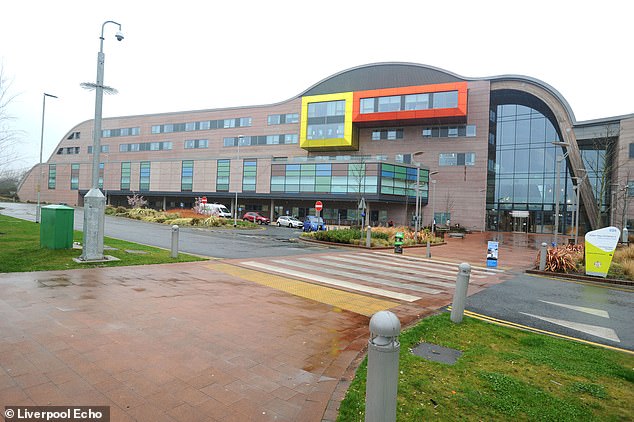 Dr Howell said before she went to see Katie herself, she thought the teenager was being prepped for surgery and the ‘clotting side of treatment’ was being managed by other members of staff.

However later that morning, she received a call to say Katie had ‘deteriorated suddenly’ on HDU shortly after a dose of morphine for a headache.

After initial thoughts of reversing the morphine, it soon became apparent Katie was ‘extremely unwell’ and hadn’t had the clotting product she should have had that morning.

Katie’s hospital visits began on June 30 after a trip to Warrington A&E, but after weeks to and fro, she eventually got her leukaemia diagnosis in late July as her family say she was ‘drastically let down’.

When asked by Julie Struthers from Leigh Day, representing the family, have there been times a haemorrhage presented as a ‘bit of headache’, Dr Howard replied ‘I’m sure there have been’ as Ms Struthers said that’s the point the family is trying to make, had she been looked at properly, ‘Katie would be here today.’

The court heard how the management plan undertaken was ‘not the plan that had been written down.’ Dr Howell said on reflection, there had been a plan in Katie’s notes that she had not been aware of, nor viewed and so felt ‘physically sick.’

She added: ‘Once Katie sadly passed away I sat down and went through all the entries for blood products and was quite concerned at the number of issues and clearly, the main issue was I hadn’t seen this plan.’

What is acute promyelocytic leukaemia?

APML accounts for around 10 -15 per cent of all cases of AML.

The myleloid cells perform a number of different functions, such as fighting bacterial infections, defending the body against parasites and preventing the spread of tissue damage.

In APML a change in a specific chromosome leads to a changes in white blood cells called Promyelocyte cells, which means they do not progress to maturity.

This leads to a bleeding disorder due to abnormal clotting.

The symptoms include pale skin, tiredness, breathlessness, frequent infections, and unusual and frequent bleeding, such as bleeding gums or nosebleeds.

The main treatment for AML is chemotherapy, which is used to kill as many leukaemia cells in your body as possible and reduce the risk of the condition coming back (relapsing).

In some cases, intensive chemotherapy and radiotherapy may be needed, in combination with a bone marrow or stem cell transplant, to achieve a cure.

Studies have shown that people with acute promyeloid leukaemia (APML), around 85 per cent will live for at least five years with treatment.

She went on to say she felt ‘distressed on a number of issues’, adding: ‘Having now focused on that plan, just giving a plan isn’t enough. We have made visible changes to make plans more visible but it needed more than that.’

Speaking of the further changes made by the hospital, she said there is a document for clotting products as well as making it clear who is making the decisions as it ‘showed us issues on how to work together’.

Also giving evidence was paediatric haematologist Russell Keenan who when asked about the headache Katie complained of, he said one relating to a bleed would be ‘sudden, new and different.’ He said Katie, who also complained of a headache at her local hospital, was ‘severely anaemic’ which is also cause for a headache.

When asked if an earlier diagnosis would have presented the outcome, he said it would have ‘reduced the risks’ but in terms of the ultimate cure it would have made no difference as the ‘cure rate is close to 98%’, despite being a ‘relatively rare’ disease. On Tuesday morning, the inquest heard how prior to Katie, two patients had APML at Alder Hey (Acute promyelocytic leukaemia) in the last 5 years.

Earlier this week, both Alder Hey and Warrington hospitals made admissions that there were ‘missed opportunities’ in relation to Katie’s care.

On behalf of the root cause analysis for Alder Hey, Dr Hughes said on Tuesday there were ‘clearly themes’ around communication and cover and ‘fairly significant’ lessons were learnt. He added just some of the changes include a more robust handover arrangement, crossover arrangements for specialities being clarified and issues around staffing and relationships.

He went on to say it was important to have a handover process for all so ‘no-one falls between gaps’ and for more complex patients, there are additional documents in place. He added there were gaps in terms of access to the management plan, which is ‘at the core’ of this case, and despite issues with the electronic record, it’s ‘not to be excused that it should have been looked at’.

When the family expressed concerns about future incidents, Dr Hughes said the action plan is a ‘live document’ and will continue to be monitored. He said: ‘We can’t turn back the clock, it’s dreadful that we can’t.’

On behalf of Warrington, the court heard how mistakes were made in terms of national scoring system PEWS, but the trust is ‘moving towards’ a different system of scoring as part of a national trial. Some other changes included management of patients presenting like Katie had as well as improvements to documentation and additional help in reviewing patients.