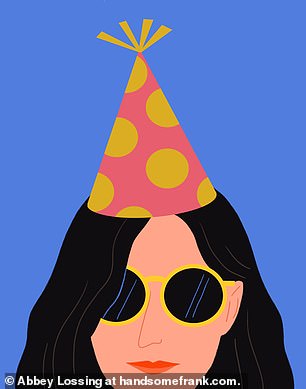 私の誕生日に私はたった2通のメールを受け取ります: one alerting me my printer needs ink

I’m writing this on my birthday. 私の特別な日. ええと, the sort of day when I always treat others to mini breaks at Lime Wood in the New Forest or to Michelin-starred meals at Locanda Locatelli and The River Cafe. To Burberry suits. Laptops. Rolex watches*. 今日? I received: 何もない, 何もない, 何もない.

Oooh! I’ve just had a WhatsApp from my oldest friend. It’s her birthday weekend, あまりにも. She has gone to Chewton Glen to celebrate with her family. I phoned the hotel a couple of days ago and asked them to put a bottle of champagne in her room. I’d love to arrive at a hotel and find a bottle of champagne and a man, both sweating.

I met this friend when we were both 18. We have never had a cross word, let alone fallen out. She was a drama student, I was studying journalism (shorthand, which I’ve never used, and the principles of hot metal type, now as out of fashion as, 上手, 私). She was very glamorous: she drove a car, had Dallas hair and wore Maud Frizon pumps.

We’d go to the cinema every week: Alien, Close Encounters…, スターウォーズ. We went on a skiing mini break: she would glide down the mountain, hair caught in the wind, while I was confined to a very slow plough shape. While at the local disco, which we went to every night, I got off with a French boy. I brought him back to our chalet, and he tried to have sex with me, but I was too tense. He’d mumbled something crossly while attempting to ‘do it’. 後で, I asked my friend what he’d said. 'ああ, he said he felt like he was trying to deliver room service, knocking on a door…?’

I was so mortified I wouldn’t try again for over a decade. A few years later, I made my friend go to the Jazz Café with me, and it’s there she met her husband, to whom she’s still married. She lives in the house she moved into when she left home. She goes to the gym every Saturday and has lunch with her mum on a Sunday. She’s normal.

Unlike me. Although, when we met, all I wanted was a job – any job (I got one on the trade paper for Lyons Maid: it was called Lyons Mail and my first assignment was to visit a tea factory, for which I had to wear a white net cap; Vogue it most certainly was not). I also just wanted a boyfriend. I never aspired to own a house, a car, designer clothes, or to be famous. I wanted to get by. I’d grown up poor: on school trips, I never had money for the ‘extras’, like the two bob it cost to enter the Whispering Gallery in St Paul’s cathedral. My only aspiration was to not be run over.

I’m trying to pinpoint when I stopped being normal. When my head was turned, when I started to expect nice things, and work became all-consuming. Even on my Special Day, I still check my emails every two minutes: refresh, refresh, refresh.

And I can’t help but wonder: has it been worth it? 番号. I’d have preferred a quiet life. I would love, 今, to be in a posh hotel with a husband who’s loved me for 30 年. With a daughter. There would be some point to all the hard work.

* I still want it back. ありがとう.