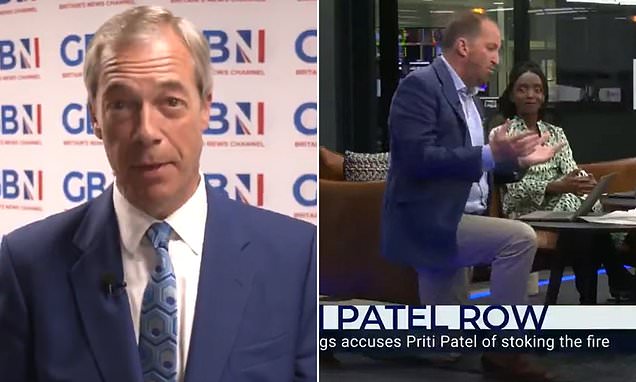 ‘It doesn’t feel like Freedom Day!': Nigel Farage takes to the GB News sofa to predict that Covid lockdown will return by September ahead of his first show next week

Nigel Farage today predicted that Covid confinamento will return by September, as he made a tough-talking debut on GB Notizie.

Hours after announcing his new prime-time slot on the controversy-embroiled channel, the former UKIP leader made an appearance on the channel, in which he took aim at Boris Johnson over the Government’s handling of lockdown.

In his typically bullish style, the politician accused the Prime Minister of ‘not delivering’ on previous promises to unlock the country and laid into the Government over its decision to remove quarantine for double-jabbed Britons returning to the UK from France.

Lui continuò: ‘I have to say there are 500.000 who suddenly learned that even if they have been double-jabbed that when they come back to the UK they are going to have to self-isolate.

‘It certainly isn’t “Freedom Day” for those half a million people. And I have to say I think we’ll be back in lockdown by September, and I just wish Boris Johnson wouldn’t make a whole series of promises that have never been delivered upon. So yes, I’m frustrated.’

His comments come after the Government on Friday night announced a sudden reversal on its Amber List plans for those returning from the UK from France.

The Government had planned to let double-jabbed Britons returning from all Amber List countries from Monday. But it suddenly pulled the plug on the plans specifically for France, citing concerns about the spread of the Beta (South African) variante.

Mr Farage was making his appearance last night after announcing he had landed a prime 7pm weeknight slot with GB News in the wake of the Guto Harri taking the knee row.

Nel frattempo, Mr Harri last night accused the ‘anti-woke’ TV channel of moving to the far-Right and claimed he was forced out after his on-air anti-racism protest was blamed for a plunge in viewers amid a viewer boycott.

Mr Harri, a former aide to Prime Minister Boris Johnson while he was Mayor of London, was publicly reprimanded by GB News executives and forced out after taking the knee in solidarity with black England football stars who received racist abuse after the Euros final.

Critics have previously pointed out how anyone who takes a knee, including police officers and sports stars, risks being seen to endorse some of the Left-wing ideas promoted by the Black Lives Matter movement as well as opposing racism.

In an extraordinary swipe at the TV channel, Mr Harri has now claimed GB News told him off for ‘offending the lynch mob’ despite him allegedly warning producers in advance that he was considering making the gesture. He claims he was given direction about how to take the knee by producers.

Writing in the Sunday Times, the pro-EU pundit said he was engulfed by a ‘tsunami of disappointment, resentment and hate’, aggiungendo: ‘Old friends were amused to see me described as woke and Marxist. By Thursday night, the boss called and I’d been taken off air for the summer.’

Mr Harri also claimed: ‘The channel is rapidly becoming an absurd parody of what it proclaimed to be. Rather than defending free speech and confronting cancel culture, it has set out to replicate it on the far-Right.’

And he continued to defend his actions, insisting that it was wrong to suggest his anti-racism protest was responsible for the decline in viewer numbers – which he claims ‘dropped pretty swiftly after launch and kept slipping’.

In an article in 2016, Mr Harri vehemently protested against Brexit and argued that a Remain vote was vital for Wales, claiming the ‘dream of Brexit is a wild fantasy’ ahead of the referendum.

Mr Harri also previously wrote in a Cardiff University journalism blog where he revealed that he wanted to escape the ‘straitjacket of impartiality’ which was ‘entirely appropriate for broadcasters but there’s a time when some of us want to take sides’. 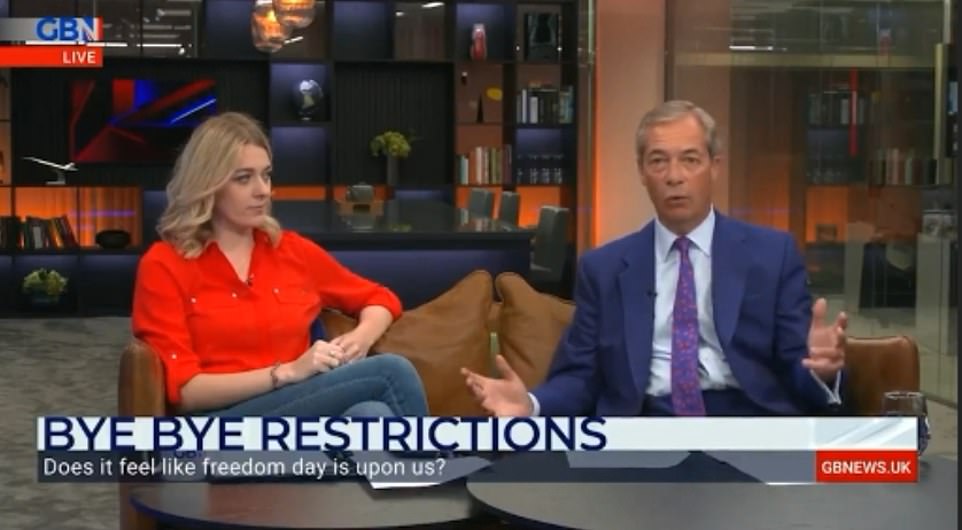 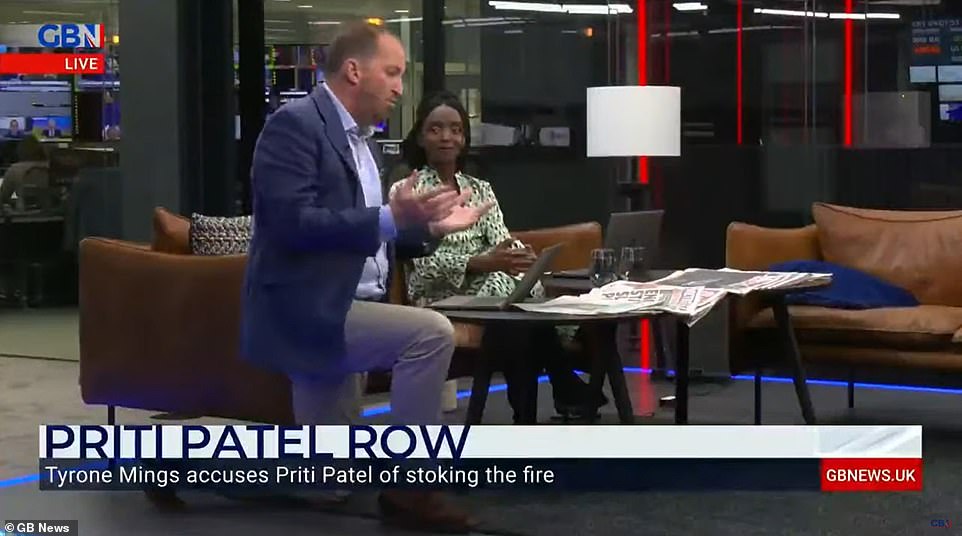 Guto Harri, nella foto, was suspended by GB News after he took a knee live on air causing outrage among the station’s viewers 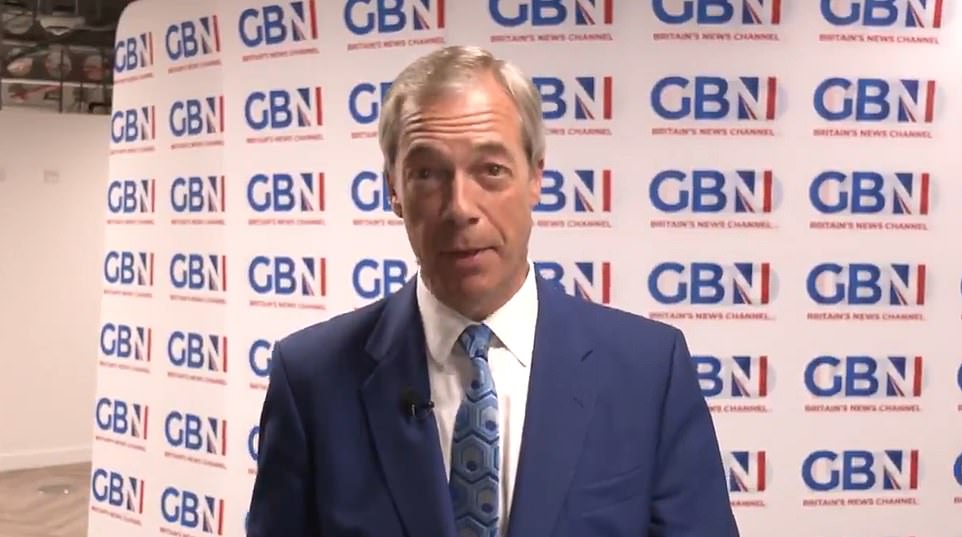 The ex-UKIP leader, 57, will host ‘Farage’ at 7pm on the national news channel from Monday, luglio 19 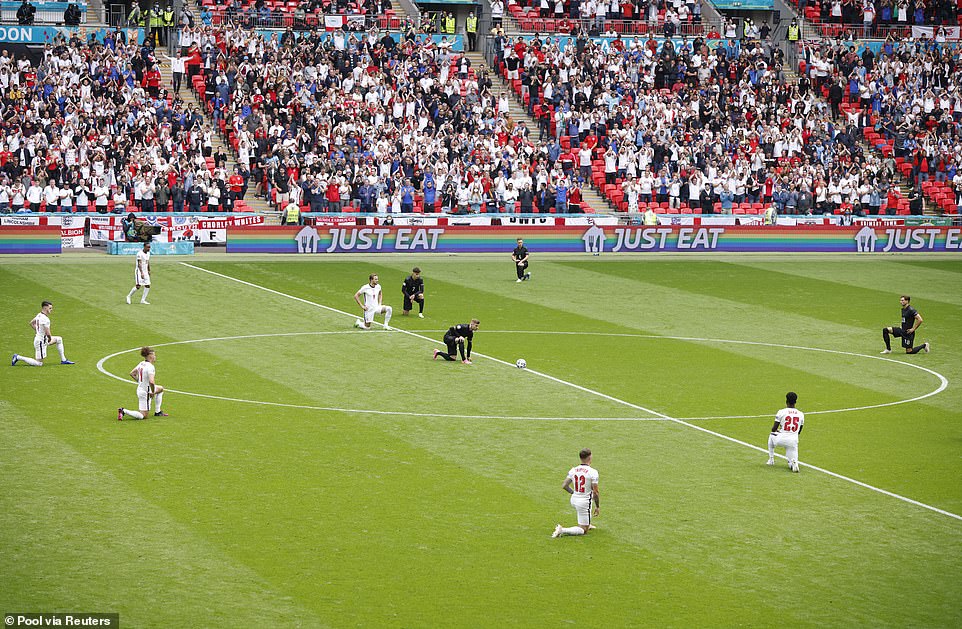 Guto Harri and his GB News co-host Mercy Muroki spoke about the vile abuse during Tuesday’s show, during which Mr Harri admitted he ‘gets’ why footballers take the knee – an anti-racist gesture inspired by last year’s Black Lives Matter protests – before each game

Mr Farage had promised a ‘big career change’ as speculation mounted that he was set to join GB News on a permanent basis. He told his 1.6 million Twitter followers to ‘watch this space’, with an announcement coming this afternoon.

Announcing his new role on GB News, Egli ha detto: ‘Since politics I have done a fair bit of broadcasting. Broadcasting matters, it really does. It gets people to look at issues, think about issues in different ways and be very influential.

Mr Farage referenced his previous three year tenure on LBC, and his YouTube channel that has more than 270,000 iscritti. He promised to take up broadcasting on ‘a regular basis’, as he revealed the finer details of his new show Farage.

Mr Harri and his co-host Mercy Muroki spoke about the vile abuse Three Lions stars Marcus Rashford, Jadon Sancho and Bukayo Saka had received online, during which Mr Harri admitted he ‘gets’ why footballers take the knee before each game.

Mr Harri then proceeded to take the knee himself on air, sparking a viewer boycott and a public telling-off by GB News. In una dichiarazione, the channel said it was ‘unacceptable’ for any presenter to take the knee and accused Mr Harri of breaking its Editorial Charter.

He had told viewers on Tuesday: ‘I’ll tell you where I am. I’ve never understood why people would find it offensive. I can see and I tended to be one of those people that thought do we really have to do this at every football match, can’t we just enjoy whatever sport we’re in too?

‘But having seen over the past few days just how close to the surface, just how deep-rooted, just how hideously ugly racism among some England fans is, I totally get why this squad throughout thought we have to say, quando l'ho incontrato, giornata fuori, that racism is not on.

‘And I actually with the benefit of hindsight, I may have underestimated how close to the surface the racism still is, I actually get it.’ 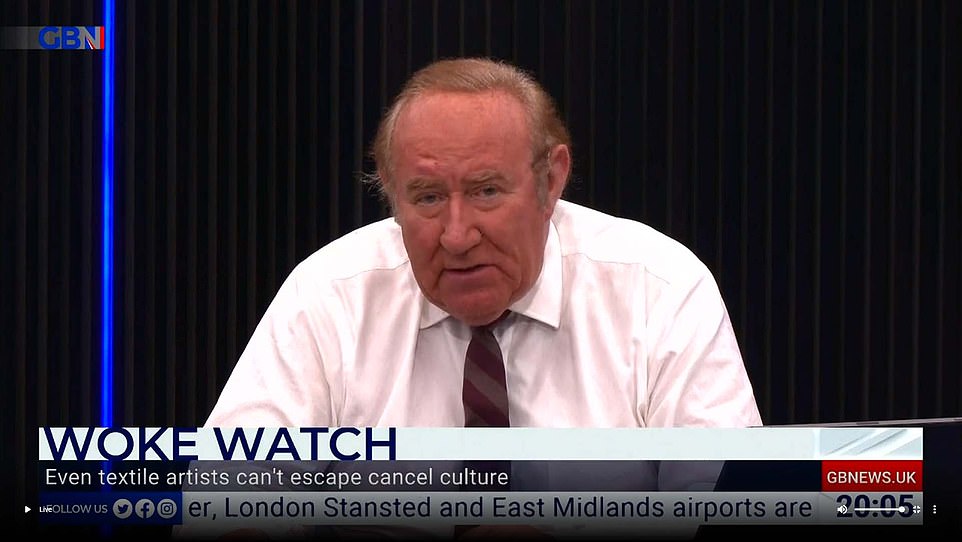 GB News said on Twitter: ‘GB News stands four square against racism in all its forms. We do not have a company line on taking the knee. Some of our guests have been in favour, some against. All are anti-racist. We have editorial standards that all GB News journalists uphold.

‘On Tuesday a contributing presenter took the knee live on air and this was an unacceptable breach of our standards. We let both sides of the argument down by oversimplifying a very complex issue.’

It is not clear if Mr Harri flouted GB News’ Editorial Charter, which says the channel defends the ‘right of every individual to form and share their views’ and brings ‘clarity to complex and contentious issues’.

The Charter states: ‘We will find out what is happening, present facts in a clear and honest way and ensure our coverage is well-sourced, facts are checked and all data used is robust and accurate.

‘If we get it wrong, we will say so – and explain what happened. We will present our programmes in a manner that respects individuals and leads to a better informed community and nation. We value freedom of expression but not by causing unjustifiable offence or exposing our audience to harm, particularly in regards to our vulnerable viewers.

‘We do not shy away from controversial issues. We will take a frank and honest look at the world, but we are sensitive to complex subjects and protect privacy unless compelling public interest outweighs this expectation.’

Defending his actions, Mr Harri said: ‘GB News is – soprattutto – about free speech; having the debates others won’t.

‘English footballers have made it clear that when they take the knee they are making a clear statement about rejecting racism (not endorsing the narrow divisive aims of BLM). I support them.’

John McAndrew, who previously insisted the channel would be a ‘place for everyone’, is reported to have resigned from GB News after clashing with bosses on its direction.

Scottish presenter Neil Oliver supported his colleague’s decision to take the knee, twittando: ‘My @GBNEWS teammate @Guto_Harri is right to say and do as he sees fit. I do the same. That’s the ethos of the channel. Free speech. We don’t all agree with each other – that’s the point, or else where’s the debate?’

GB News said on its official Twitter account: ‘GB News stands four square against racism in all its forms. We do not have a company line on taking the knee’

The veteran broadcaster broke his silence on the raging row with a candid statement, in which he admitted ‘start ups are fraught and fractious’.

But Mr Neil, who is currently taking a break from hosting the channel, said the future remained bright for GB News – despite viewing figures falling-off since its launch last month.

In a rallying cry posted on Twitter, l'emittente ha detto: ‘Start ups are fraught and fractious GB News is no exception. But the news channel is finding its feet and has a great future. Guarda questo spazio.’

A second social media user tweeted: ‘People will be surprised to know you have standards,’ while a third person wrote: ‘someone taking a stand against racism is an ‘unacceptable breach of your standards’? Sounds like a delightful place to work for.’

A fourth questioned: ‘What about free speech? I thought you were all about that?’

Presenter Guto Harri made headlines this week after taking the knee on GB News – to the fury of many of the channel’s viewers.

It is the latest political statement from Harri, chi in 2016 penned an article vehemently protesting against Brexit and arguing that a Remain vote was vital for Wales. He wrote that the ‘dream of Brexit is a wild fantasy’ ahead of the referendum.

Harri also previously wrote in a Cardiff University journalism blog where he revealed that he wanted to escape the ‘straitjacket of impartiality’ which was ‘entirely appropriate for broadcasters but there’s a time when some of us want to take sides’.

Born in Cardiff, Harri studied Policy, Politics and Economics at Oxford, before studying a masters in Broadcast Journalism at Cardiff University.

His education prompted an 18-year career at the BBC, where he started in Welsh-language radio.

He then fronted Welsh election programmes for the broadcaster before becoming a regular on several mainstream politics shows.

Harri covered the collapse of Communism in Romania, Czechoslovakia and East Germany before reporting on the Gulf War from Saudi Arabia, Jordan and northern Iraq. A novembre 2002, he became the BBC’s Chief Political Correspondent.

After leaving the BBC in 2007, he turned down a job with David Cameron, instead joining a PR agency and serving as advisor to Zimbabwe opposition leader Morgan Tsvangirai for four weeks.

A maggio 2008, he was appointed Communications Director for Boris Johnson during his time as Mayor of London.

He joined Rupert Murdoch’s News UK in May 2012 come Director of Communications and Corporate Affairs and was seen as being responsible for helping to reband the organisation in the wake of the phone-hacking scandal. 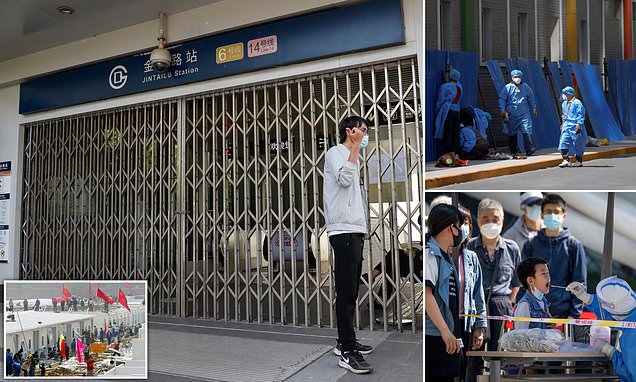 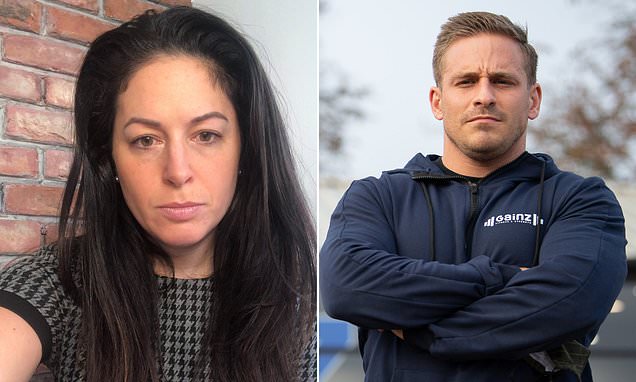