Lost Origin isn’t your meat and two-veg play: it’s immersive, partly improvised and seriously high-tech, featuring lasers, virtual-reality headsets and gizmos galore. You don’t watch the play so much as help create it.

This very much isn’t theatre for people who like to doze off in comfy seats at the back of the auditorium; though each showing lasts just an hour, every minute is packed with activity.

On pitching up, attendees are rushed in groups of six to a shipping container to be briefed on the mission at hand. There’s a villain on the loose in the vicinity – a dastardly dark net supremo who’s selling illegal bounty online (Covid vaccines, Picassos, human organs… the usual). 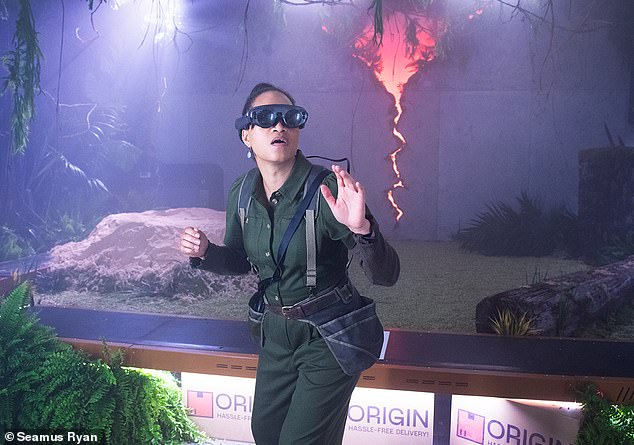 While the actors (Yasmine Holness Dove, above, in the Deep Time Room) guided my group of six through the plot with real energy, they were also hammy and overexcited

The unit then goes on the hunt, sneaking from room to room in a decked-out dock in Hoxton to ensure the baddie pays for his misdeeds.

It’s less a play than a high-spec and convoluted escape room. While the actors guided my group of six through the plot with real energy, they were also hammy and overexcited, as if they’d forgotten their audience was within touching distance, not marooned in rows far away.

But it’s a fun way to spend an hour, and the sets are magnificent (one memorable scene plays out in the blown-out pages of a diary). At its best, taking part in the show feels like tumbling down the rabbit hole, Lewis Carroll-style.

It’s just a pity that children under 14 aren’t allowed – they’d love it.