Magnus Carlsen REFUSES to say if US teen opponent cheated 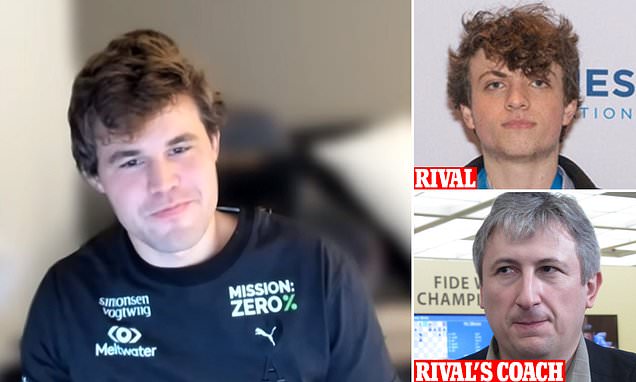 Magnus Carlsen, 31, stunned avid chess fans when he resigned from a rematch against Hans Niemann, 19, after just a single move in the online Julius Baer Generation Cup on September 19.

Niemann unexpectedly beat the world champion in a real-life battle for the Sinquefield Cup in St. Louis a month before the online tournament on Chess24.

Dlugy was banned from Chess.com in 2017 after allegedly cheating on one of the Titles Tuesdays, and was the first to suspect Borislav Ivanov of cheating with a device in his shoes in 2013.

Former chess prodigy Dlugy was also jailed on charges of attempting to embezzle $9million, but he was later cleared of all charges.

Carlson was interviewed by a reporter in Oslow, and quizzed on his thoughts on the bizarre claims of cheating.

The chess genius said: ‘Unfortunately, I cannot particularly speak on that but people can draw their own conclusions and they certainly have.

‘I have to say I’m very impressed by Niemann’s play and I think his mentor Maxim Dlugy must be doing a great job.’ 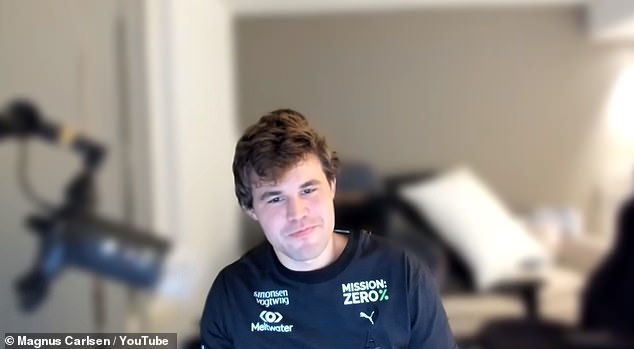 Magnus Carlsen, 31, stunned avid chess fans when he resigned from a rematch against Hans Niemann, 19, after just a single move in the online Julius Baer Generation Cup 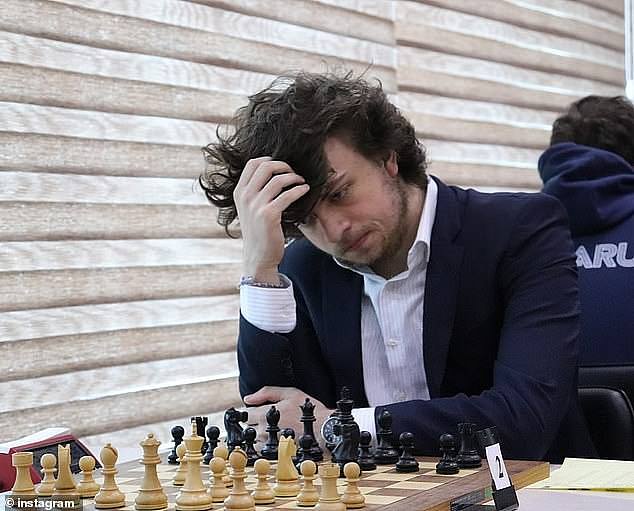 Chess genius, Niemann, 19, has been accused by fans of cheating in a slew of different and imaginative ways

He added that he thought cheating in the sport was ‘easy’ to do, but he ‘wouldn’t recommend it’ no matter how ‘tempting’ it might be.

Carlson also said that he would ‘probably’ say a bit more on the entire situation when the entire tournament comes to an end.

During a preliminary round in the online tournament, Carlsen caught announcers by surprise when he made a single move with black, and then conceded defeat and logged out of the match.

Announcer Tania Sachdev said during the Carlson vanishing act that it was ‘unprecedented’, saying he was ‘making a very big statement’ by refusing to play Niemann.

It follows San Francisco-native Niemann’s victory over the Norwegian Carlsen – while the teen was playing black – at the Sinquefield Cup on September 4. 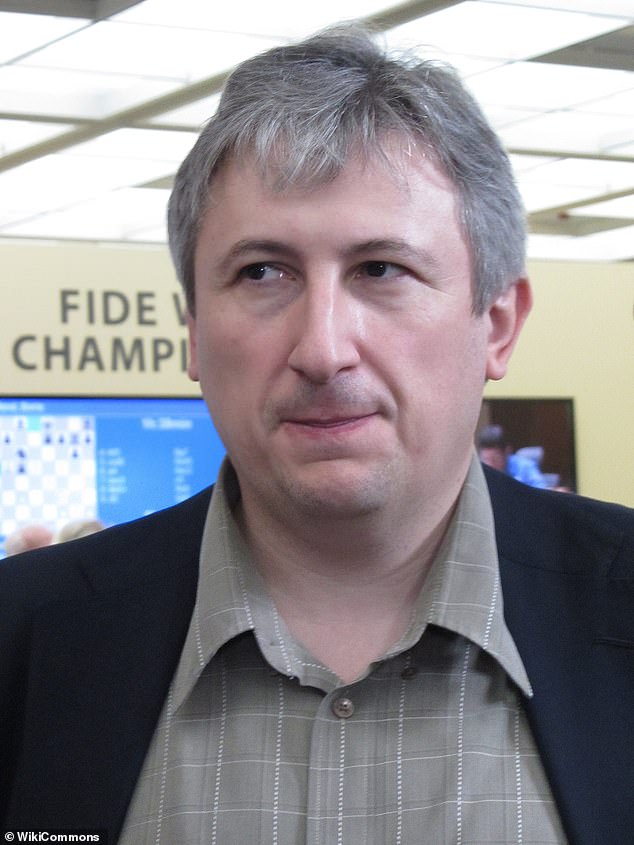 Dlugy, pictured, was banned from Chess.com in 2017 after allegedly cheating on one of the Titles Tuesdays 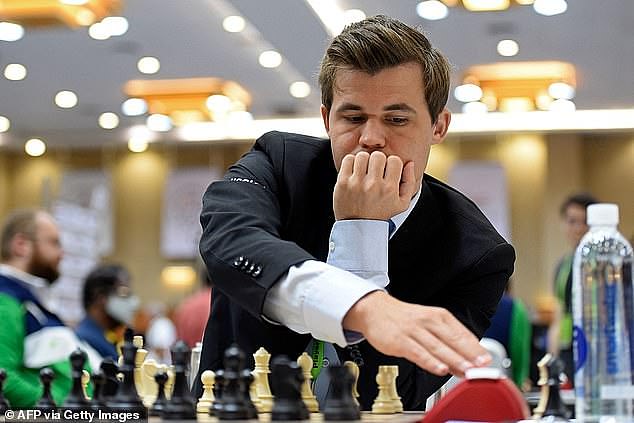 Carlsen made a snarky comment about his opponents coach, who has previously been accused of cheating, saying he’s doing a ‘good job’ as he laughed

When Carlsen dropped out of the St. Louis tournament without explanation, he posted a cryptic Tweet saying: ‘I’ve withdrawn from the tournament. I’ve always enjoyed playing in the @STLChessClub, and hope to be back in the future.’

Along with the Tweet, he posted a cryptic video of football manager Jose Mourinho saying: ‘If I speak I am in big trouble’.

Mourinho had been speaking at a news conference after a game in which his team is believed to have lost because of some questionable decisions by officials.

Carlsen had played 53 classical matches without a loss and had won the cup twice before in the last decade, but had never withdrawn from an ongoing event.

Chess.com has declined to invite Niemann from Chesscom Global Championship, a $1million event starting with online qualifiers and culminating in an 8-player final in Toronto, after the controversy. 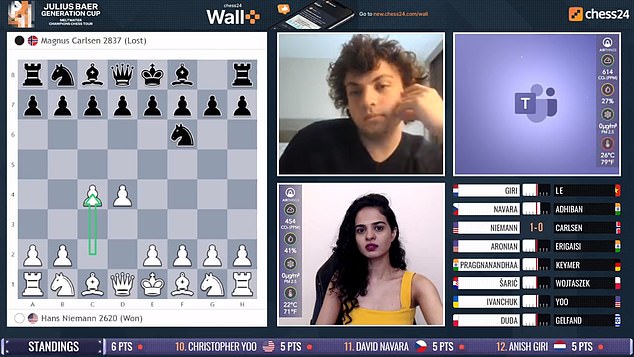 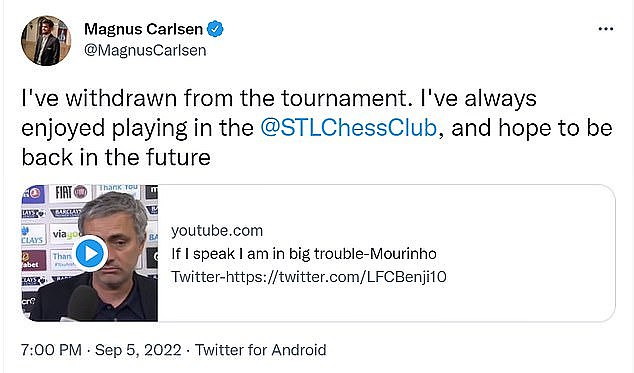 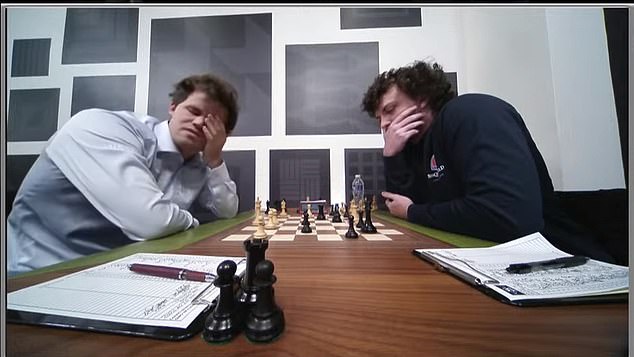 The teenage star said: ‘I have never cheated in an over-the-board game. If they want me to strip fully naked, I will do it.

‘I don’t care. Because I know I am clean. You want me to play in a closed box with zero electronic transmission, I don’t care. I’m here to win and that is my goal regardless.’

But critics note that his Elo rating, which gauges the strength of chess players, shot to 2701 after his victory over Carlsen, up from just 2484 in January 2021, a staggering rise that some find unlikely.

And Niemann has admitted to cheating in online chess tournaments when he was a child, saying that he deeply regrets it.

In one online match when he was 12, he says one of his friends brought over an iPad loaded with a ‘chess engine’ program that offered the most likely route to a win.

The person Niemann was playing couldn’t see him, and so was unaware of what was unfolding.