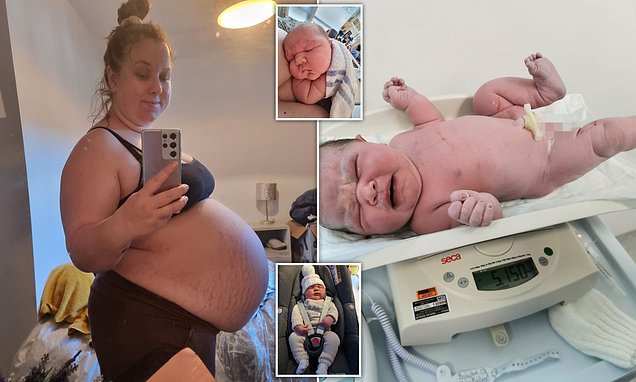 A BIG bouncing baby girl! Mother gives birth to 11lb 5oz tot who weighs the same as a bowling ball – as she confesses she is ‘glad’ she had a Caesarean

A mother has revealed how she has given birth to a baby weighing the same as a bowling ball over 11 pounds.

Helen Sellers, 34, from Leeds, gave birth to her daughter Celia, who weighed a whopping 11lbs 5oz, five weeks ago.

Helen, a mental health nurse, explained that Celia was one of the biggest babies her midwife had ever delivered in her 16 year career.

She revealed how nurses had ‘taken ages’ to get the baby out during her Caesarean, adding: ‘I initially wanted to try natural delivery, but I’m glad I didn’t now because I’m not sure she would have come out.’ 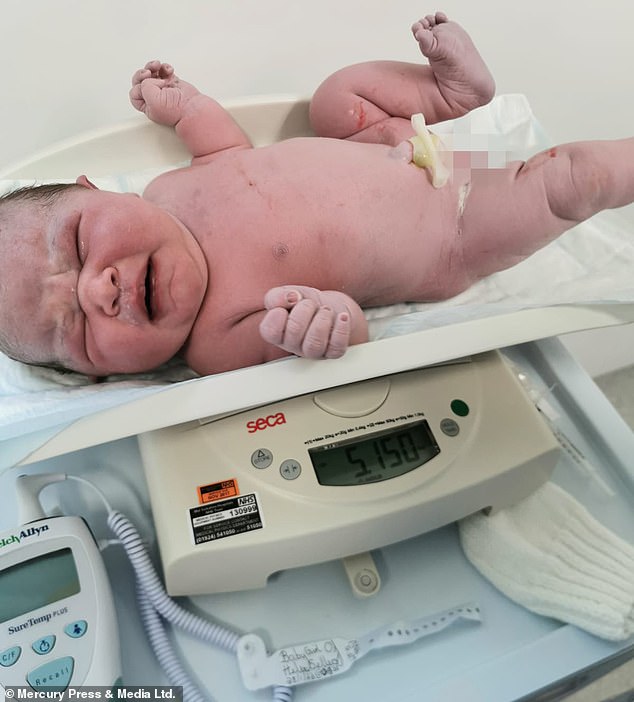 Helen Sellers, 34, from Leeds, has revealed how she has given birth to a baby weighing the same as a bowling ball over 11 pounds 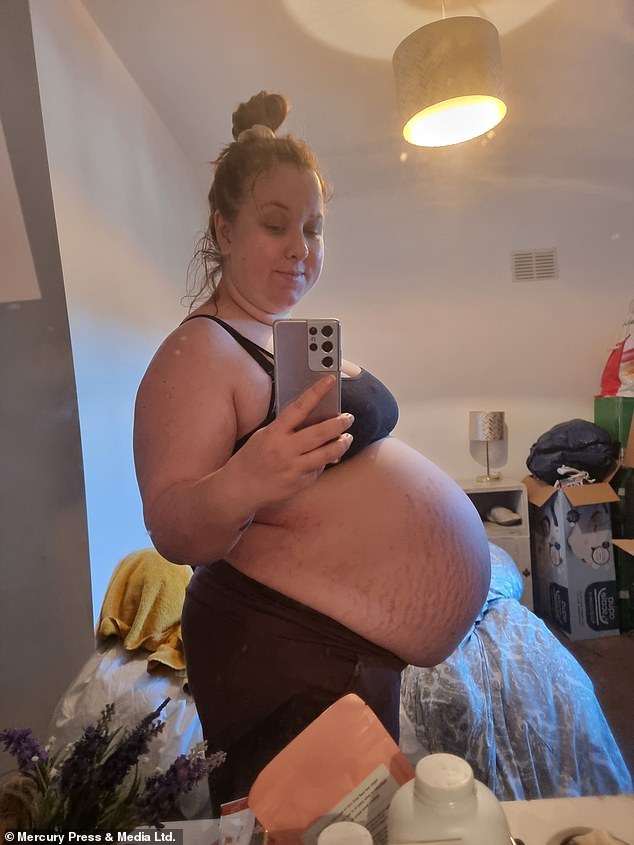 During the pregnancy Helen had a big bump, with the mother-of-two adding: ‘My bump was huge, I always had people asking me if I was having twins.

‘There was one lady at work who asked me a few times if I was sure it wasn’t twins!

‘The doctors tested me for gestational diabetes but they were negative.’

When she gave birth to her first child, a boy called Roman, he weighed 9lbs, and  Helen and husband Carl, 37, were both under 9lbs as newborns. 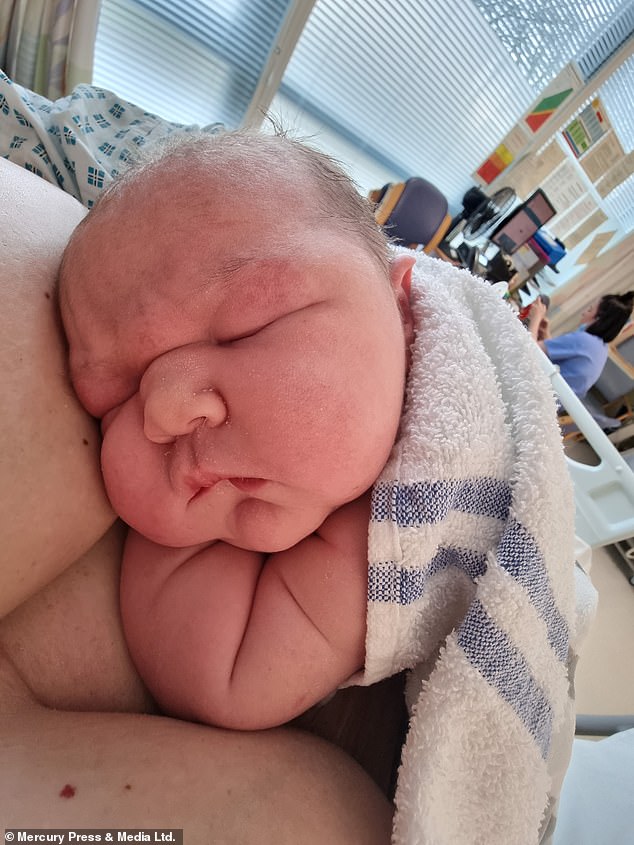 Helen, a mental health nurse, revealed that Celia was one of the biggest babies her midwife had ever delivered in her 16 year career 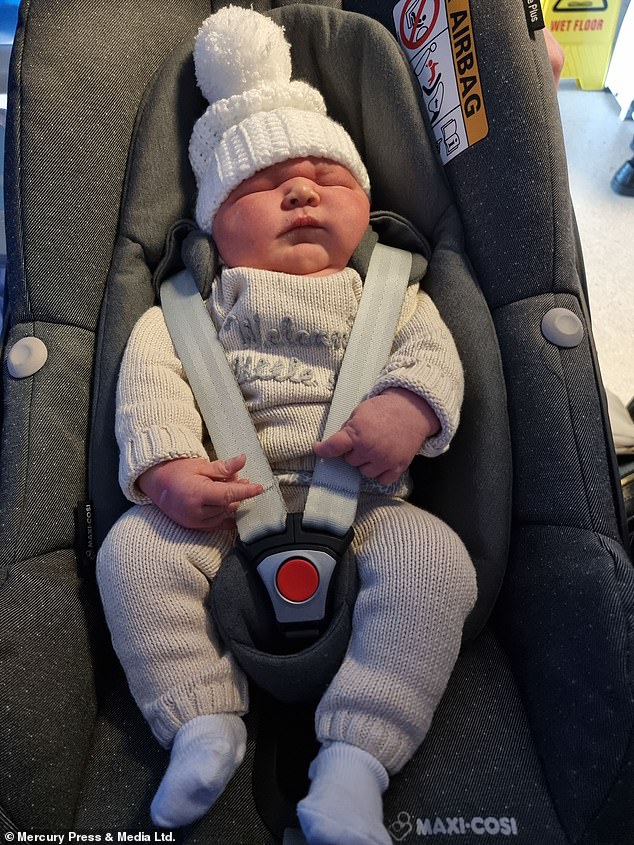 Helen revealed that the midwives had hilarious reactions to Celia’s size, with many coming to the ward to visit the baby

‘While I was pregnant, my consultant said that the baby was going to be big, but not as big as Roman.’

Helen revealed that the midwives had hilarious reactions to Celia’s size.

She said: ‘I had to have a C-section, and it took them ages to get her out. 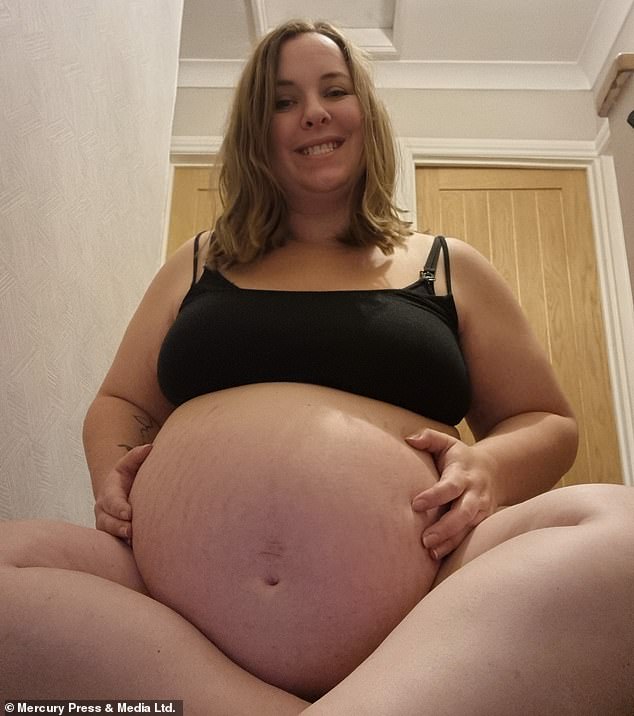 During the pregnancy Helen’s bump grew to a large size, with the mother-of-two confessing it was ‘huge’ 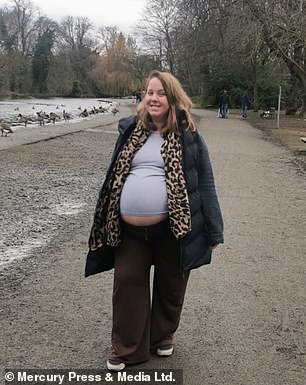 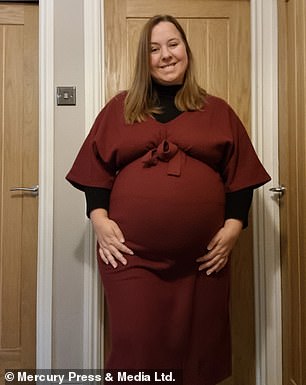 Before she gave birth, a family member predicted the baby would weigh 11lbs – but Helen confessed she though it was a cheeky joke (pictured, while pregnant)

‘The midwives were laughing a bit and saying she was really big.

‘She was the talk of the ward, they all wanted to come and look at her because she was so big.

‘My midwife had worked for 16 years and she said Celia was the second biggest baby she’d ever seen.’

She added: ‘I never expected her to be that weight.

‘We played guess the weight with my family, and my cousin put 11lbs and I thought that was so cheeky, but he was right!’ 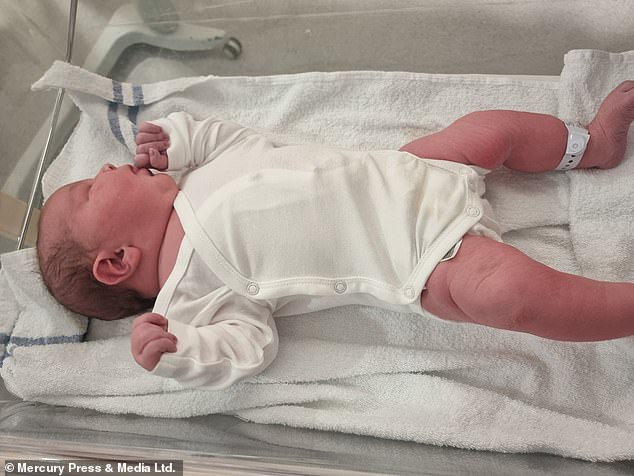 Celia had to go straight into 0-3 clothes when she was born, because none of the newborn clothes fit her (pictured)

Celia had to go straight into 0-3 clothes when she was born, because none of the newborn clothes fit her.

Helen said: ‘I had bought a couple of baby grows that were up to one month, and I didn’t even bother getting them out the packet.

‘I knew they wouldn’t fit her.

Britain’s biggest ever babies: Tot born in 1992 holds the record at 15lbs 8oz

While Celia’s birth weight is impressive, she’s no where near the record for the biggest baby born in Britain.

The heaviest baby ever born in the UK was 15lb 8oz Guy Carr, from Barrow-in-Furness, Cumbria, who was welcomed via caesarean section in 1992.

George Joseph King, who arrived on February 11 in 2013, is thought to be the biggest baby born naturally in Britain.

He weighed a staggering 15lb 7oz (more than double the average newborn weight of 7lb 8oz) when he was born at Gloucester Royal Infirmary.

George’s mother Jade Packer, then 21, who had gas, air and a last-minute epidural, described the labour as ‘horrifically traumatic’.

In December 2017, Brodey Young became the heaviest baby born at a hospital in a decade, tipping the scales nearly 13lb.

He weighed in at 12lb 130z – nearly the same as a bowling bowl, stunning midwives and doctors on the Blueberry Ward at Diana, Princess of Wales Hospital in Grimsby – and his mother Sheralyn Wilcock, of Cleethorpes.

According to the Guinness Book of World Records, the heaviest baby ever born was the son of Canadian giantess Anna Bates (née Swan) who gave birth at her home in Seville, Ohio, on January 19, 1879.