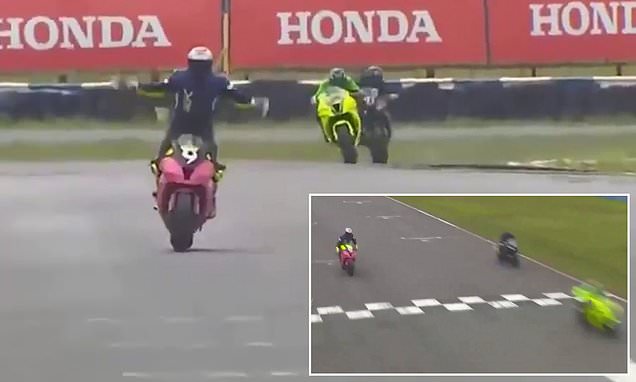 Stand-up comedy! Motoracer is left red faced after he rises from his bike to celebrate with the finish line in sight… only to be finish THIRD after being pipped by two rivals at Superbike Brazil

This is the mortifying moment a motorcycle racer gets pipped to the finish line – after relaxing and celebrating victory too early.

Andre Verissimo took his hand off the throttle and stood up to savour what he mistakenly thought would be a memorable win as he rounded the final bend.

But two other competitors were following close behind at the race track in the central Brazilian city of Goiana, called the Autodromo Internacional Ayrton Senna. 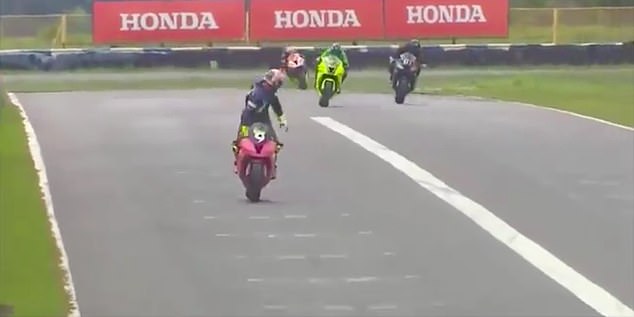 Verissimo had to make do with third place as rivals Osvaldo Filho and Marcelo Skaf went by him in the final seconds of the Superbike Brazil race.

The gaffe occurred on the eighth and last race of the championship.

Footage of the remarkable incident showed Verissimo looking behind him after going round the final bend with a comfortable margin over his rivals and then standing up on his bike and raising his arms in the air.

The second time he turned round to double-check on the men behind him, he obviously realised he had made a grave miscalculation and got immediately back into race mode by sitting back down again on his motorbike and accelerating as fast as he could. 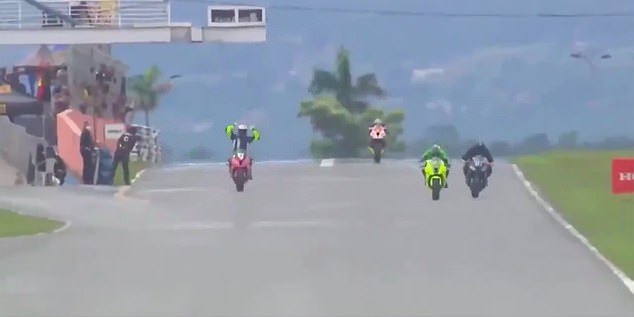 But it wasn’t enough to maintain his first place and he was left punching the air again with his arms, but this time in frustration as his schoolboy error sunk in.

Another racing fan added: ‘The idiot of the year.’

There was no immediate comment from the Brazilian motorcycle racer, who despite having to settle for third on the podium on the day was overall championship winner in the EVO category with his average over eight races. 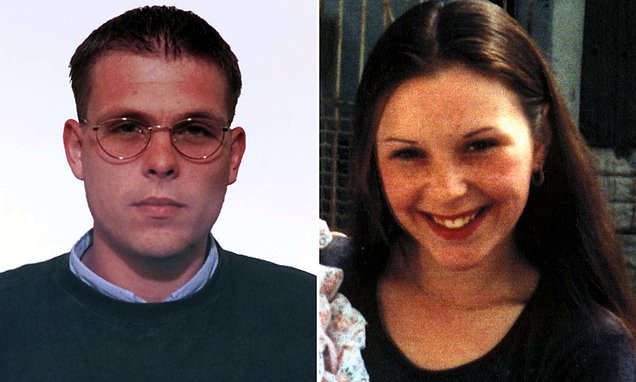 Killer, 47, who strangled his wife is denied parole for a THIRD time