Mum shares the ‘bin’ lunchbox system she uses with her kids 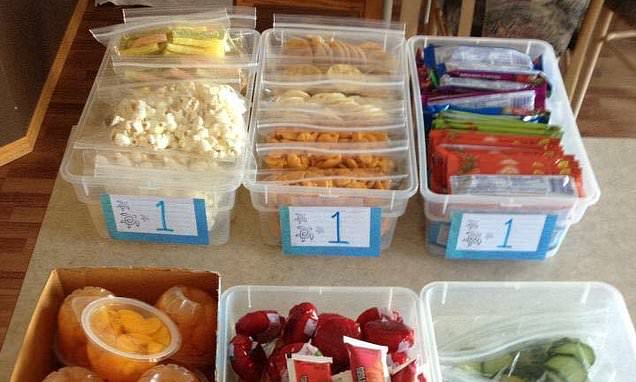 A mum has wowed parents across the world with her clever lunchbox ‘bin’ system, whereby her kids have control over what they eat for lunch.

Rachel, from Canada, shared her simple system in an Australian lunchbox group on Facebook, and said she came up with the idea after her children kept ‘complaining they were sick of sandwiches’.

Now, Rachel has seven different ‘bins’ – from which her kids can choose some meat and vegetables, fruit, carbohydrates, dairy, a ‘fast snack’, a piece of junk food and something they have baked that week for their lunch and snacks.

This means that they have some control over what they put into their lunchboxes each day, and the lunches are more likely to come back fully eaten. 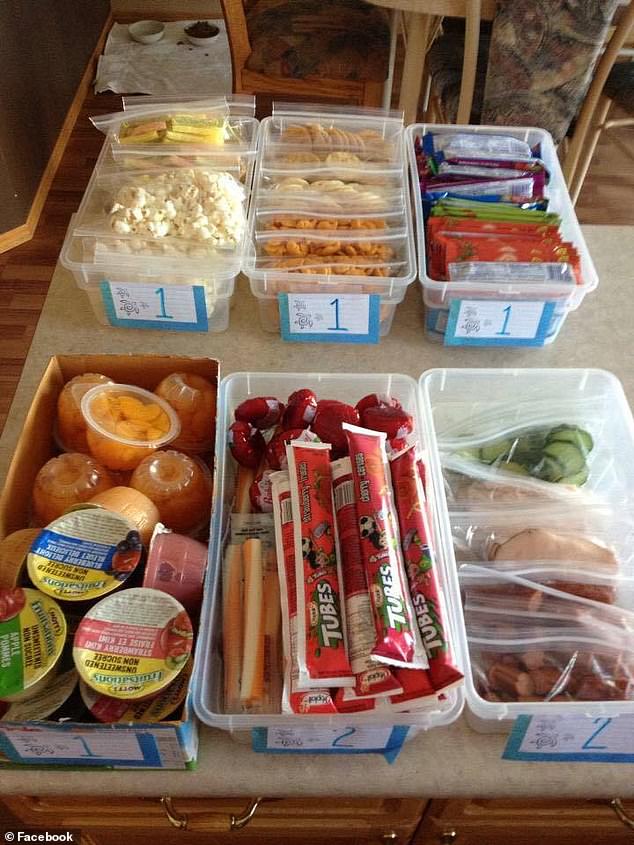 A mum has wowed parents across the world with her clever lunchbox ‘bin’ system, whereby her kids have control over what they eat for lunch (her system pictured)

Rachel posted on Facebook: ‘When my kids complained they were sick of sandwiches, it reminded me that as mums, we all need new ideas for our kids and should help one another out.

‘It’s also a great way to give your kids more independence, they love helping to shop and portion the boxes out too.’

To try the ‘bin’ system for yourself, Rachel recommends you divide out seven different containers and fill them with various foods.

‘Each bin is trying to ensure the total gives a balanced diet,’ Rachel said.

‘Granted, some items are not 100 per cent healthy, but they are better than the fast food many are eating.’ 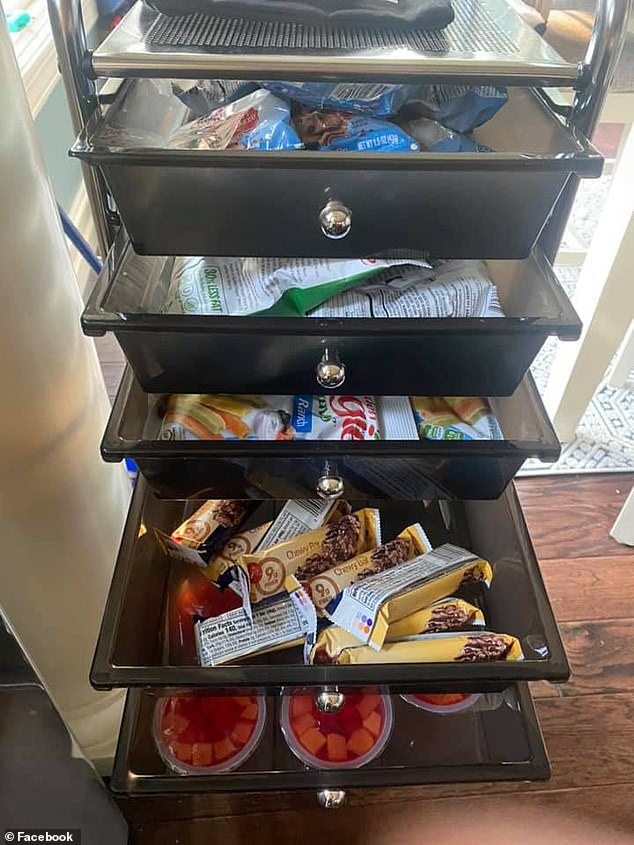 Thousands were impressed with the idea and said they’d try it for themselves, with many also saying they have their own systems that are similar (pictured)

What do the different ‘bins’ contain?

Rachel said the numbers on the bins represent how many of that item the children are allowed to take from the bin.

‘Whatever they don’t eat at school becomes their snack when they come home,’ she said.

The first ‘bin’ is for junk food, of which her kids are allowed to pick one item.

Examples from this bin include air popped popcorn, pretzels or vegetable straws.

The second ‘bin’ is for carbohydrates, including bread sticks, slices of bread and rice crackers, while the third is a ‘fast snack’ of no sugar added organic fruit to go or fruit and vegetable bars.

Again, they can pick one item from each.

The fourth ‘bin’ is for fruit like fruit cups in juice and unsweetened apple sauce or fresh fruit, and the children can have one item.

The fifth ‘bin’ is for dairy like Babybel cheese, diced cheese, Greek yoghurt and yoghurt drinks, and the children can have two items from this.

Meat and vegetables like sliced carrots, cucumbers and leftover chicken breast and ham fill the sixth ‘bin’, and the kids can choose two.

Finally, the seventh ‘bin’ is for anything they have baked that week like granola bars, banana muffins or cookies.

Rachel’s children are allowed one item from this basket. 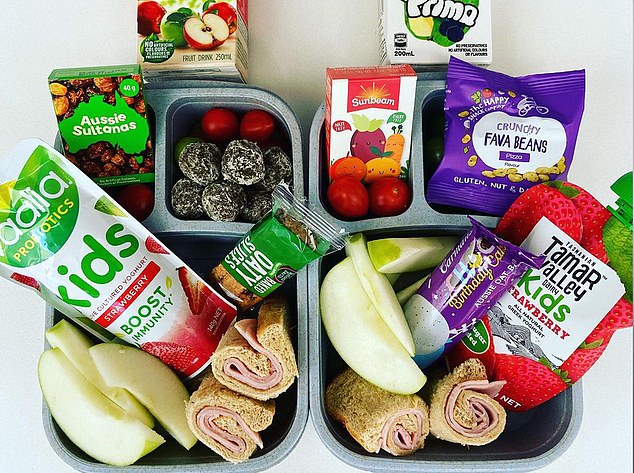 Thousands who saw the simple idea said they were impressed with it, and many said they would definitely be trying the system for themselves.

‘This is great! I have two in school and one on the way. Saves so much time in the morning and my kids will actually eat their food with this,’ one commenter posted.

‘Thanks so much for these wonderful suggestions! My kids hate sandwiches, it’s always a battle to figure it out in a healthy way,’ another added.

Others shared their own variations on the system, and said it makes for a very streamlined approach to school lunches. 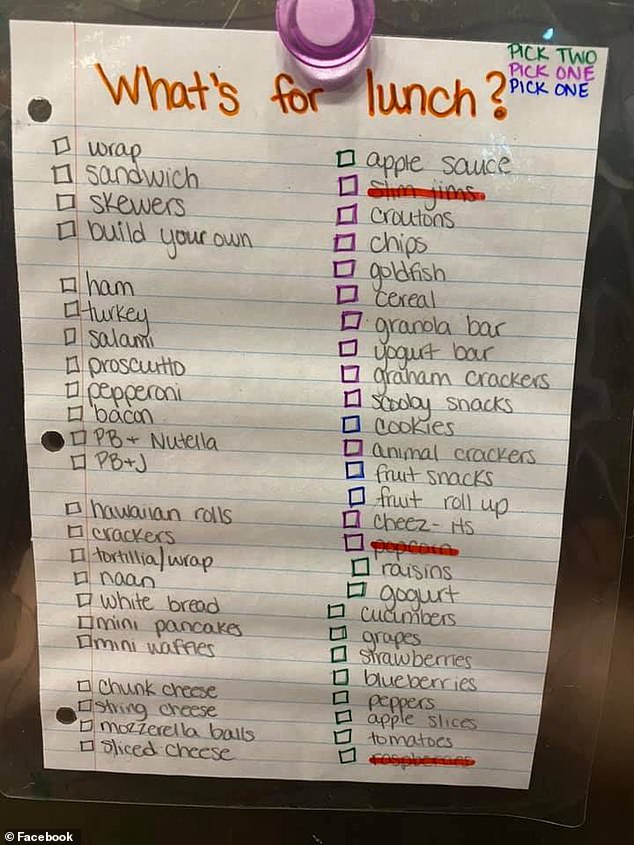 Previously, a mum called Curstie explained she keeps a weekly master list of colour-coded foods, and she lets her children choose certain items for lunch (pictured)

This isn’t the first lunchbox system to wow online.

Previously, a mum called Curstie, posted on Facebook, where she explained she keeps a weekly master list of colour-coded foods, and she lets her children choose certain items for their lunchboxes, while crossing off whatever they have run out of.

‘Kind of proud of this, not going to lie,’ Curstie wrote alongside a photo of her list.

‘The kids know exactly what the lunch options are, they get to pick what they want and I cross out things we are out of with a marker so they know it’s not an option for now.’

Curstie went on to say that the best thing about her system is that her children get a hand in choosing what they want to eat, meaning their lunchboxes are more likely to come home from school eaten.

The list also helps her when she comes to writing her grocery list as she knows what needs to be replaced that particular week.

It also boasts purple snack foods like granola bars, yoghurt bars, croutons, chips and animal crackers – of which they are allowed one.

Curstie’s children are also allowed to build their own sandwich, wrap or naan, with another section dedicated to their choice of carbohydrate and healthy sandwich fillings.